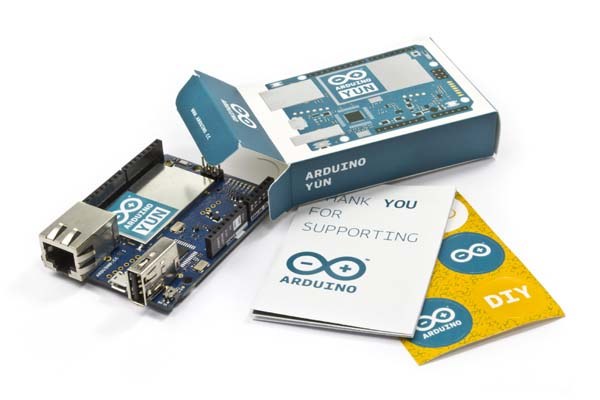 The Arduino is one of our favorite DIY devices, but it’s yet to be the most powerful microcontroller on the market. There are demands on other functionality such as internet interface. The new Arduino Yun provides a solution as it’s a combination of Arduino and Linux with built-in Wi-Fi.

What is the Arduino Yun?

The Arduino Yun is a Linux-powered micro-controller similar to the Arduino Uno, and a possible replacement for a Raspberry Pi in some Arduino systems. The Arduino Yun is the first Linux-based Arduino board. It combines a regular old Ardunio Leonardo, embedded directly on the same board as a Wi-Fi system. The Linux OS is a customized version of OpenWRT which is one of the most used Linux distribution for embedded devices.

I think the name “Yun” is possibly a translation from the Chinese character 云 which means “Cloud”.

What Can the Arduino Yun do?

For a long time, the Arduino engineers have been trying to take the Arduino platform into the cloud. There are Ethernet and WiFi shields available, but it isn’t the a ideal option if you’re processing data scraped from a web page. Also in the past interfacing Arduino to web services has been difficult, as services often use text formats like XML or JSON that require a lot of RAM to parse.

The Arduino Yun is packed with a bunch of improvements over other Arduino devices. With Wi-Fi, you can upload your sketches and programs without ever plugging it into your computer and it’s incredibly easy to connect it to the internet. Likewise, the Arduino sketches you upload can communicate with the Linux command line, so you’ll be able to develop all kinds of crazy projects using both environments.

There’s a USB port for plugging in peripherals, native WiFi support (802.11n, even!), an Ethernet connector, and enough RAM to do all the interesting stuff a small computer connected to the Internet can do.

To make all this web programming easier for Arduino newbies, the YUN also includes a bridge library that allow the Linux-side and the Arduino-side to communicate with each other, and allow you to offload all the RAM-intensive networking onto the Linux machine and allow the Arduino to do the talking with hardware (that’s what the Arduino is best at :-) ) 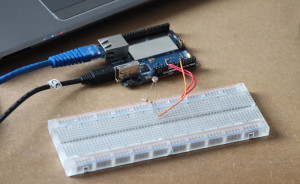 Arduino Yun on Sale and How much?

The Arduino Yun’s bridge library allows communication between the two processors (AR9331 – the Linux system and the ATmega32U4 – the micro processor).

It’s possible to install and run your own applications using the bridge. The ATmega32U4 can be programmed from the AR9331 by uploading a sketch through the Arduino Yun’s Wi-Fi interface. When connected to the same Wi-Fi network, the board will appear under the ‘port’ menu of the arduino IDE. the sketch will be transferred to the AR9331, and the linux distribution will program the ATmega32U4 through the SPI bus, emulating an AVR ISP programmer.

To help people develop applications that can connect to popular web services, the Arduino has partnered with Temboo, a service that simplifies accessing hundreds of the web’s most popular APis. The Temboo library comes with the Arduino Yun would allow connections to a large variety of online tools easily including Google Plus, Facebookand Twitter.

The Arduino Yun can be powered by a micro-usb cable, the Vin pin, or the optional power over Ethernet (POE) module. When powering from the Vin pin a 5VDC Voltage is required just like any other Arduino board. But be aware there is no on-board voltage regulator for higher voltages unlike other Arduino boards.

The Arduino Yun runs a customized version of the OpenWRT called ‘linino’. The Linux image has a full python installation and package manager you can use to install additional software. The AR9331 has 64 MB of DDR2 RAM which provides the resources to perform tasks like running a web server or streaming video from a webcam. You can also expand the storage memory by adding a micro-SD card or a USB flash drive.

You can find out more about the Arduino Yun from the official blog.

Here is an Arduino Yun Introduction Video by the team, showing you how to connect to the internet and interact with the Micro-processor.

Once this is done, you can go directly to the board using the Arduino IDE instead of selecting the serial port adapter IP.