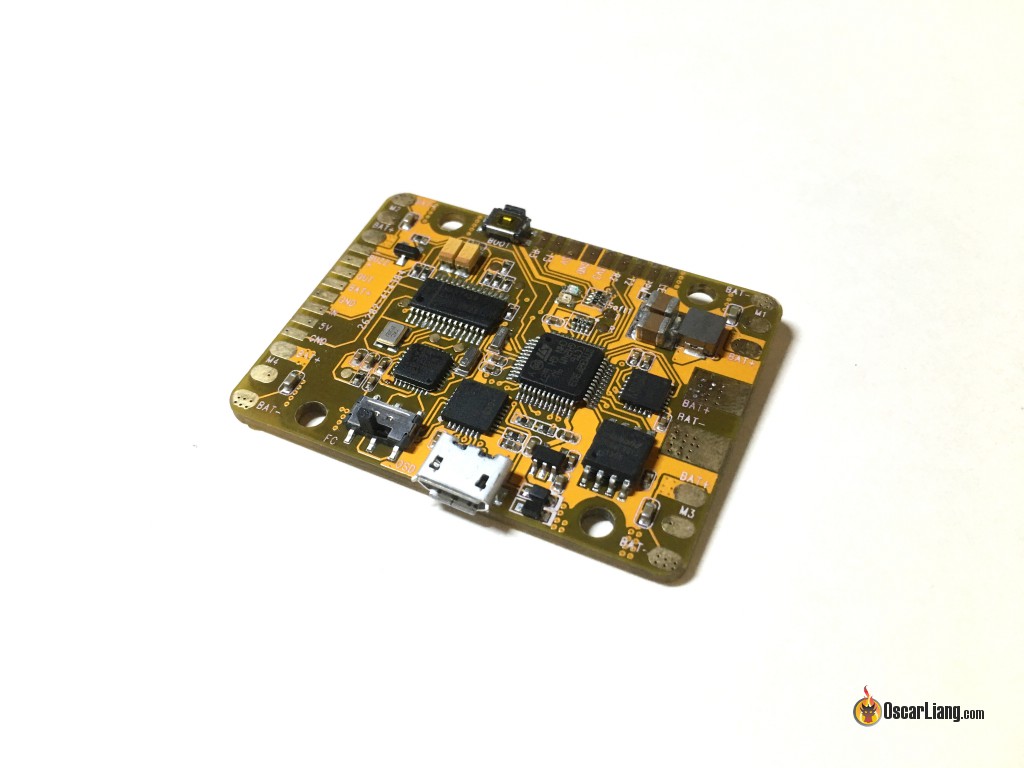 This is a story of a FC that died right after I finished the build, and there came another FC to the rescue. Thank you Newbeedrone, thank you BeeFlight FC!

So I received the production version Kombini FC earlier this month to replace the faulty prototype board. I was eager to try that because it’s the first FC I’d used that has integrated PDB.

Not to mention I have the new Quadro200 frame from one of the most creative FPV frame designer, Stefan van der Ende. The frame is a pure piece of art. 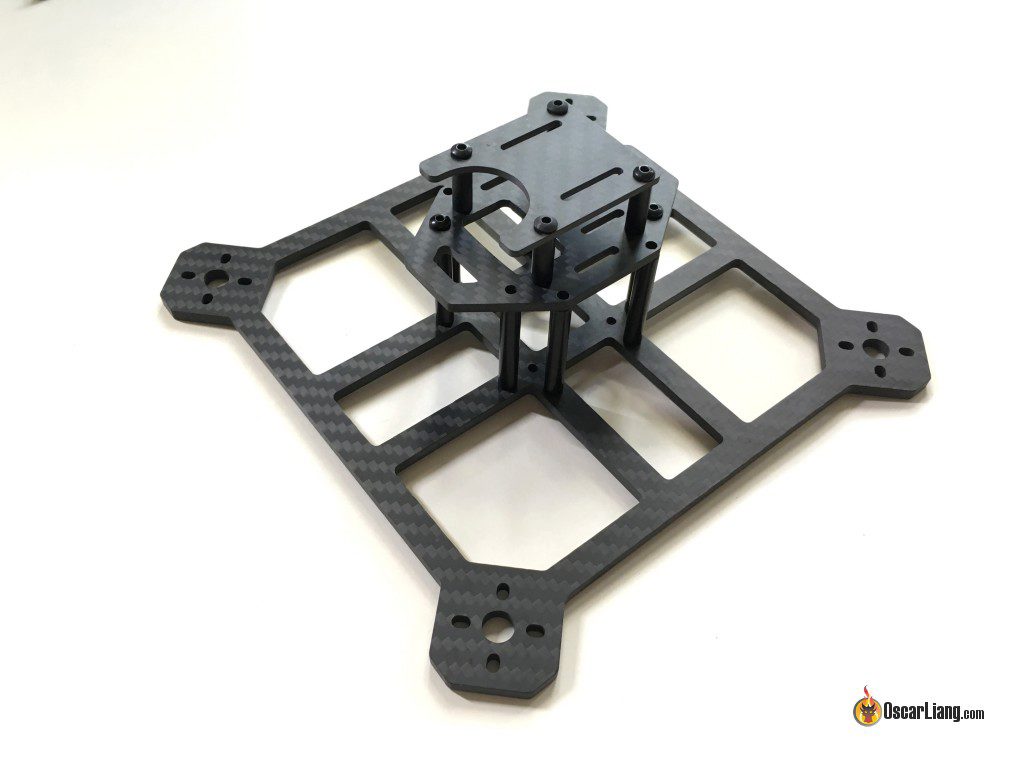 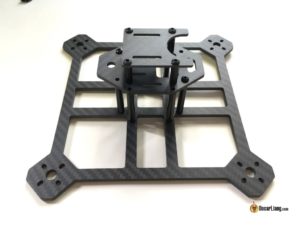 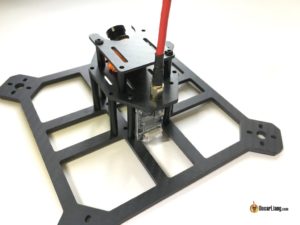 The camera mounting is pretty clever, the camera sits right in the cutout and doesn’t require any 3D printed parts or hardware. However the angle is fixed and not adjustable. 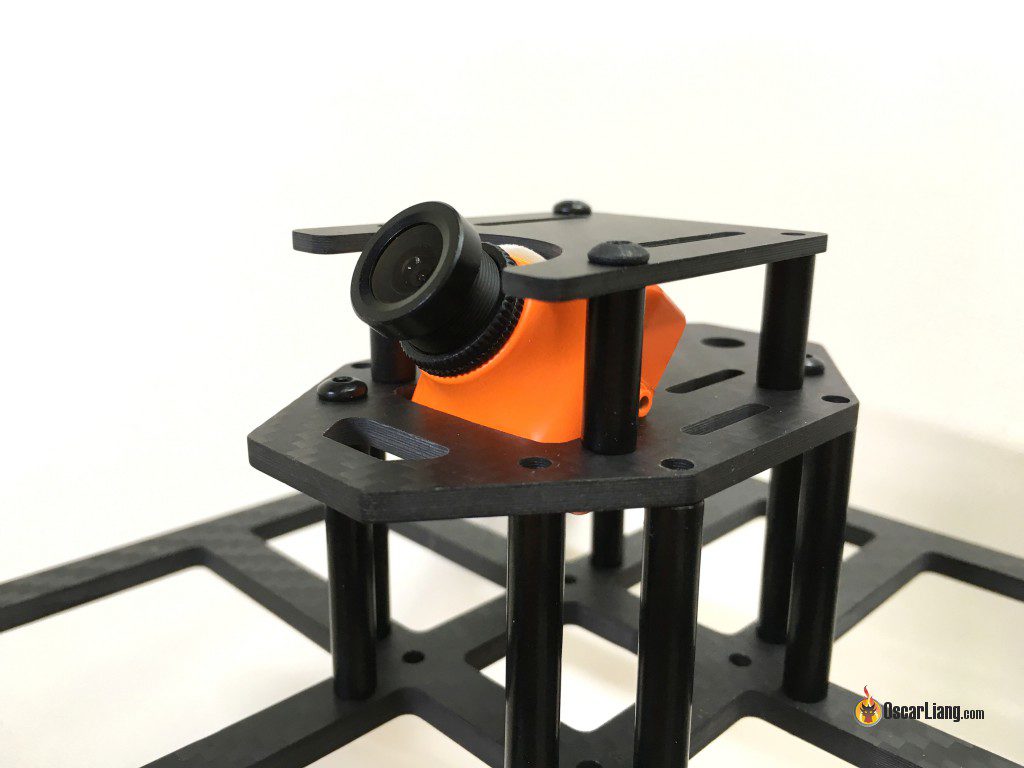 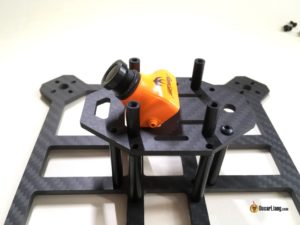 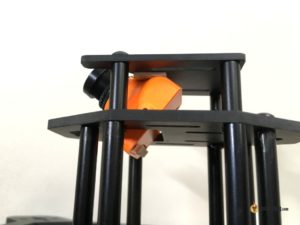 Installing the Kombini FC, soldering is a bit tough because the FC is packed with components and solder pads, I had to be extra careful not to short the pads next to it. It’s good that they included the signal ground. 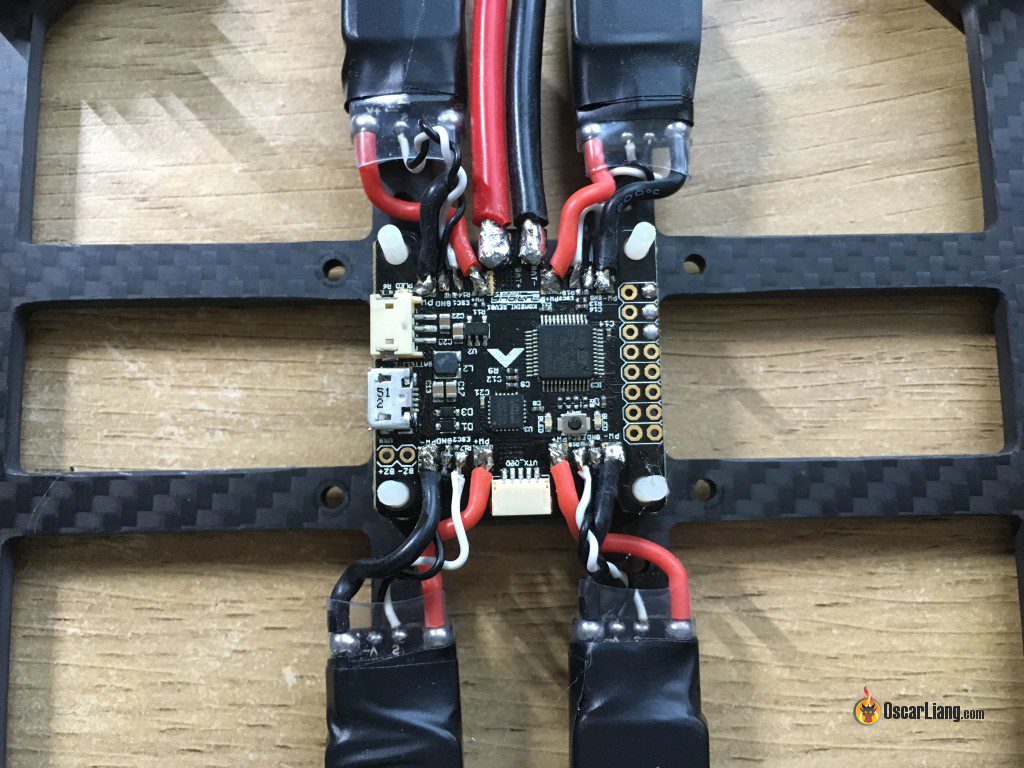 Protecting the FC with my IntoFPV 3D-printed plate with Buzzer holder :) 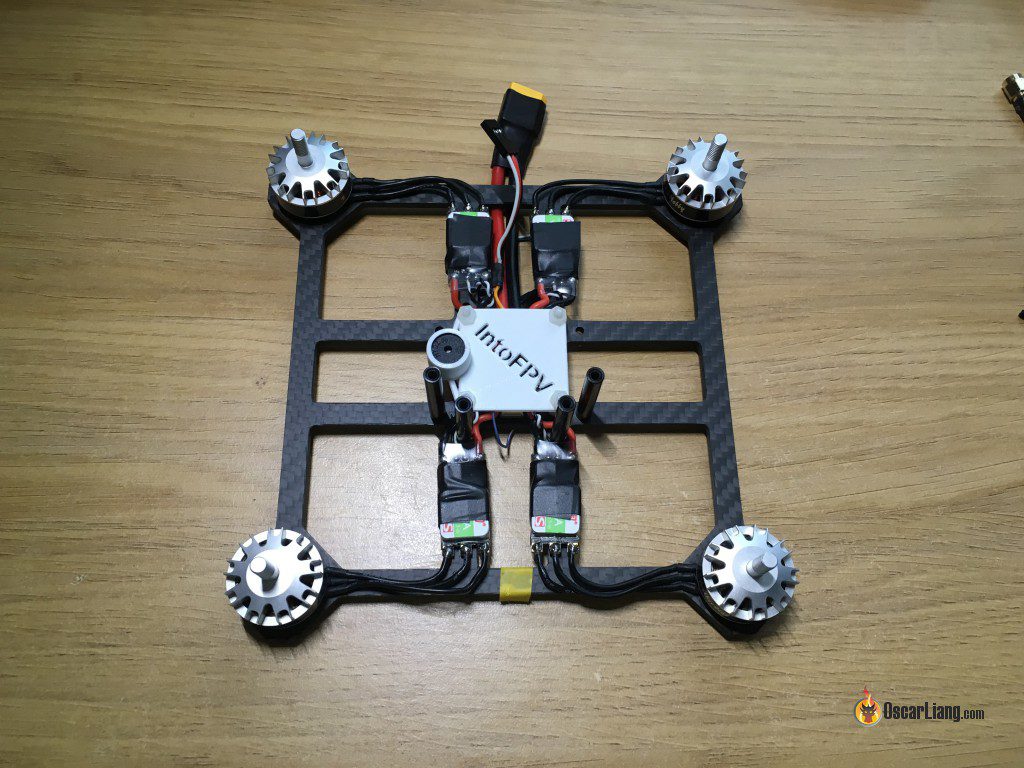 I am using DYS XS30A ESC (BLHeli_S) and Tornado T1 Motors. I thought to myself, “This is going to be the cleanest build ever!”

With the Foxeer Arrow which has VBAT and voltage OSD, I just needed a VTX and RX to complete this build! No PDB and OSD. 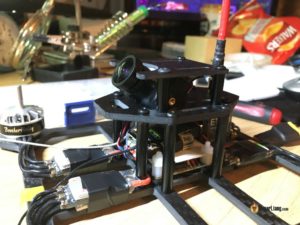 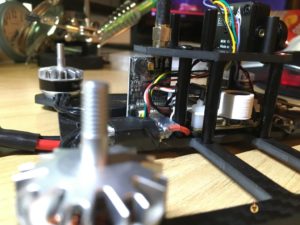 I connected the FC to my computer, set up all the stuff I needed and calibrated the ESC’s. Almost ready to go.

But… (nothing counts before the word but)

When I disconnected the USB cable and plugged in the LiPo, nothing happened. FC wasn’t powered.

I looked around, trying very hard to find out what was wrong. Loose cables? Bad soldering? Shorts somewhere?

And when I flipped the quad over, I found a missing diode (D4) on the Kombini (circled in green). I think it must have fallen off during my quad assembly. 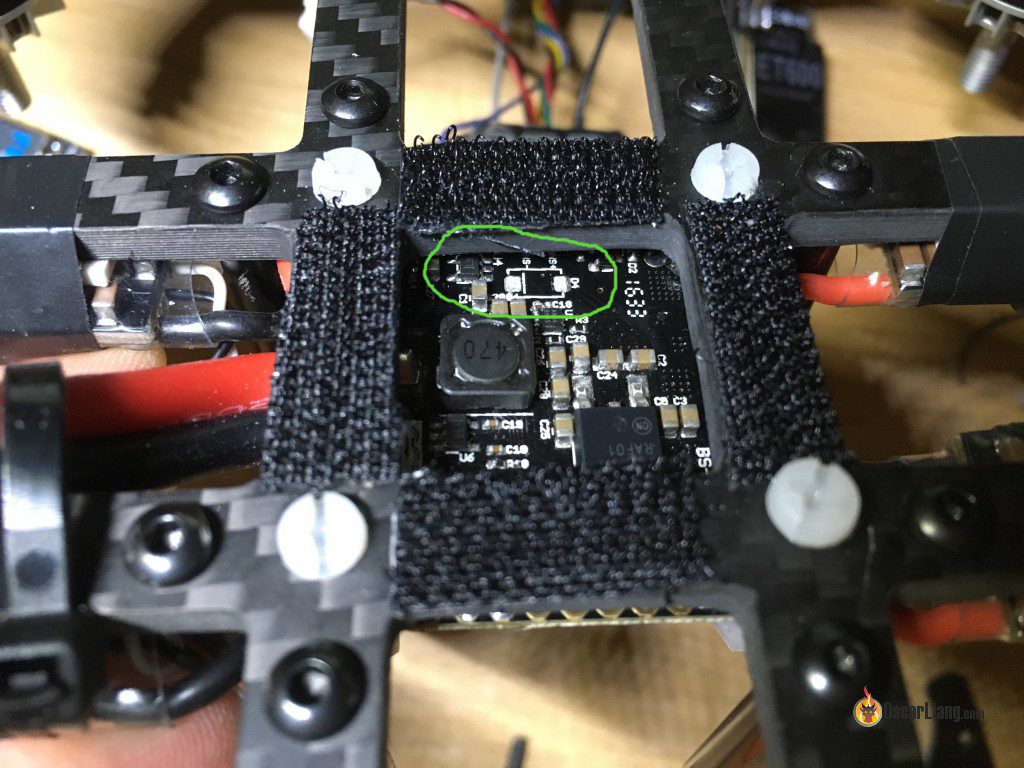 It was very frustrating as I wasted 4 hours on the build, and now I had to take the quad apart again and try to fix it (didn’t work though).

Luckily one week later I received a different FC to complete this build.

The BeeFlight is from NewBeeDrone. I was told the board I received is the final prototype, and it’s not available in their shop yet. 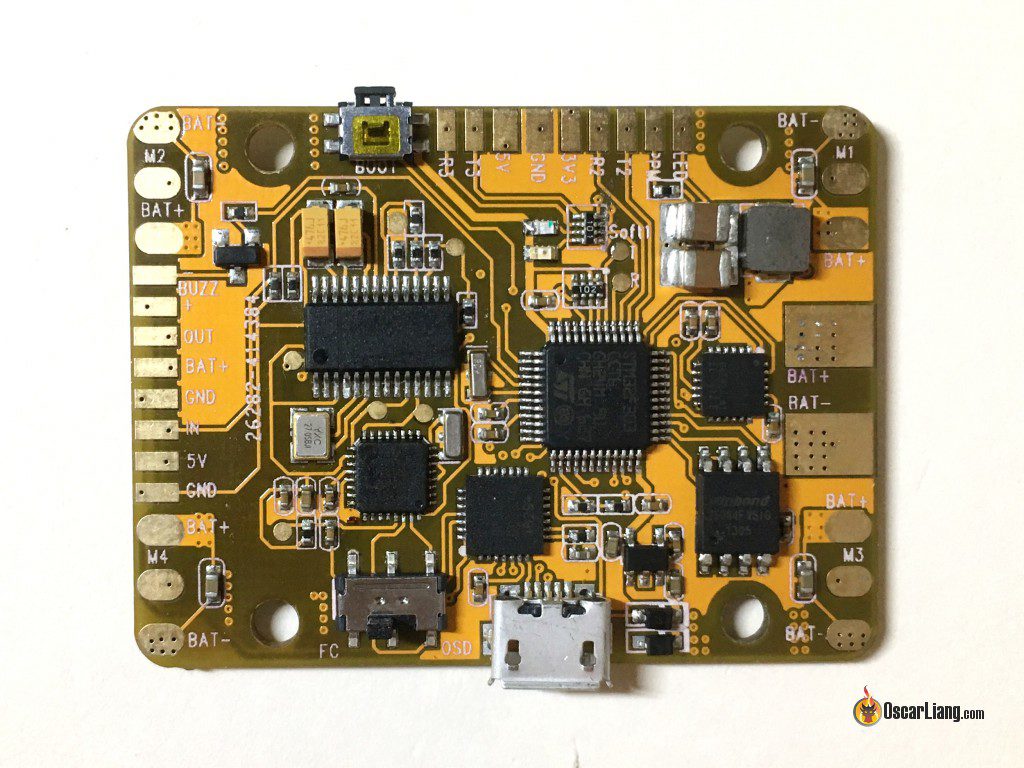 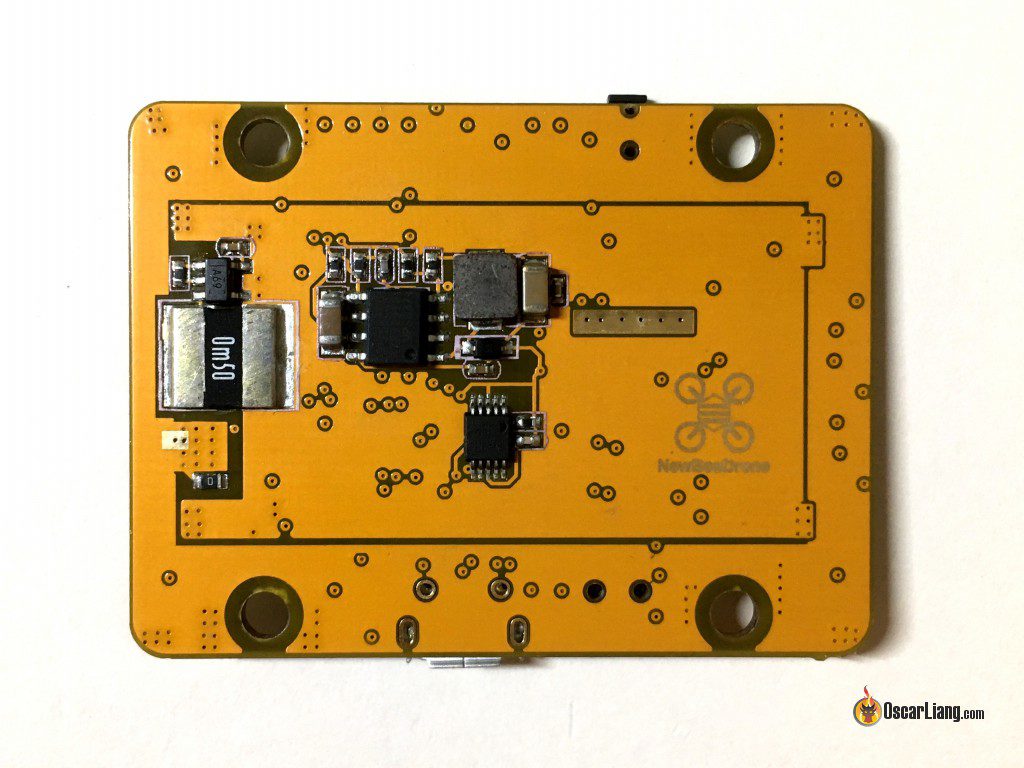 Yes it’s a very interesting board. It’s not square like other standard flight controllers, the dimension is 36mm x 50mm.

Even though I got the board, I have absolutely no official spec information. Perhaps the spec is not confirmed for production… I am not sure as I am not getting any confirmation from NewBeeDrone either at the moment.

So far I know:

Something I noticed during the build: 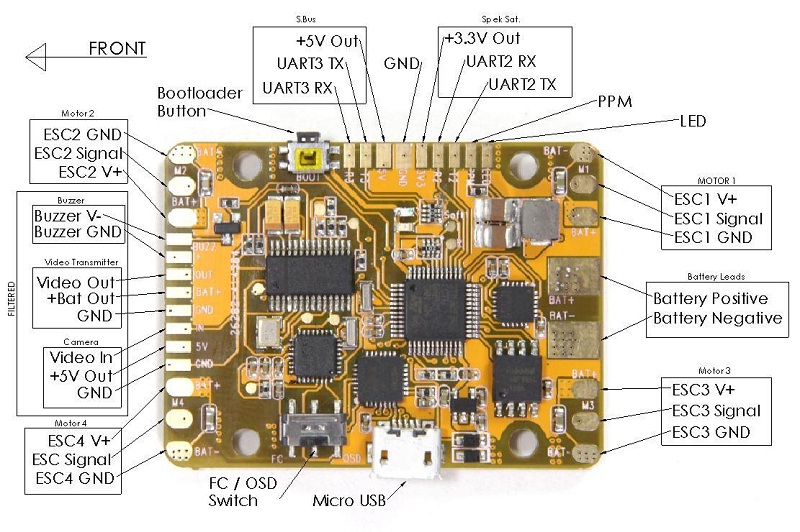 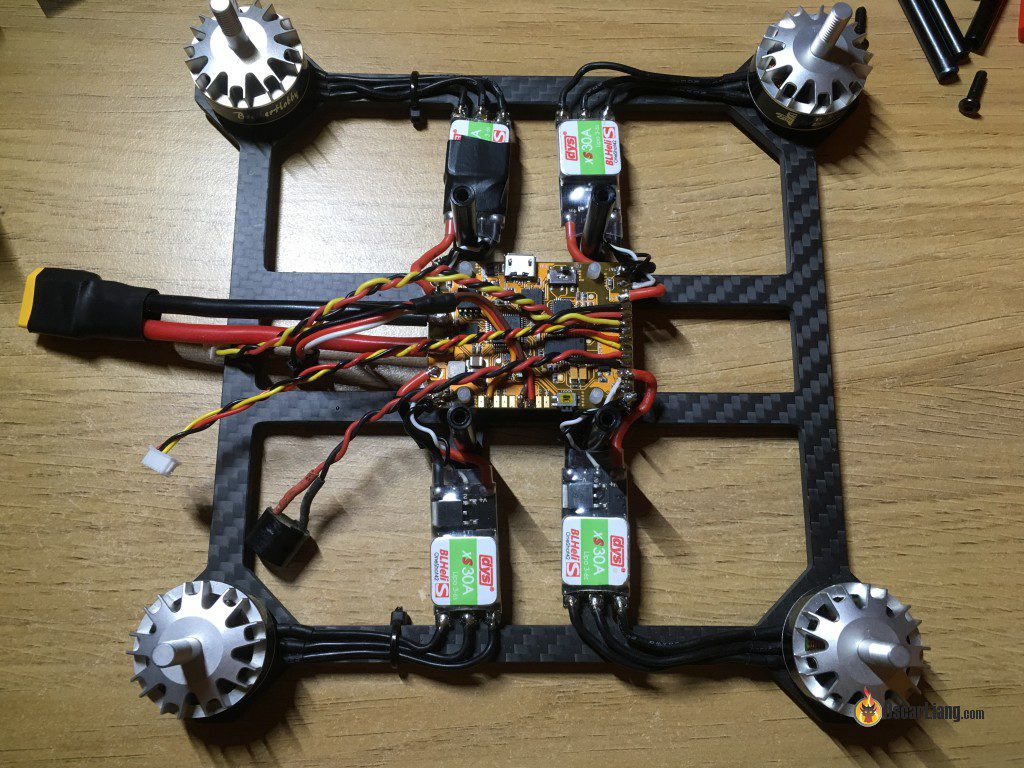 I first solder all the wires on the board, the rest is just plug and play :) That’s the beauty of AIO boards.

I went back to the Runcam Swift in this build since the FC has integrated OSD. 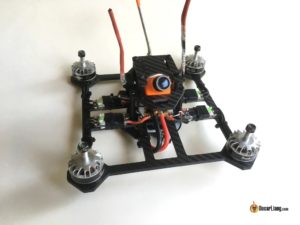 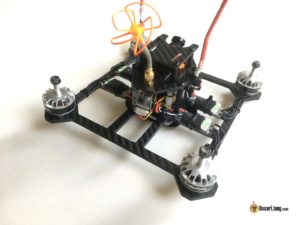 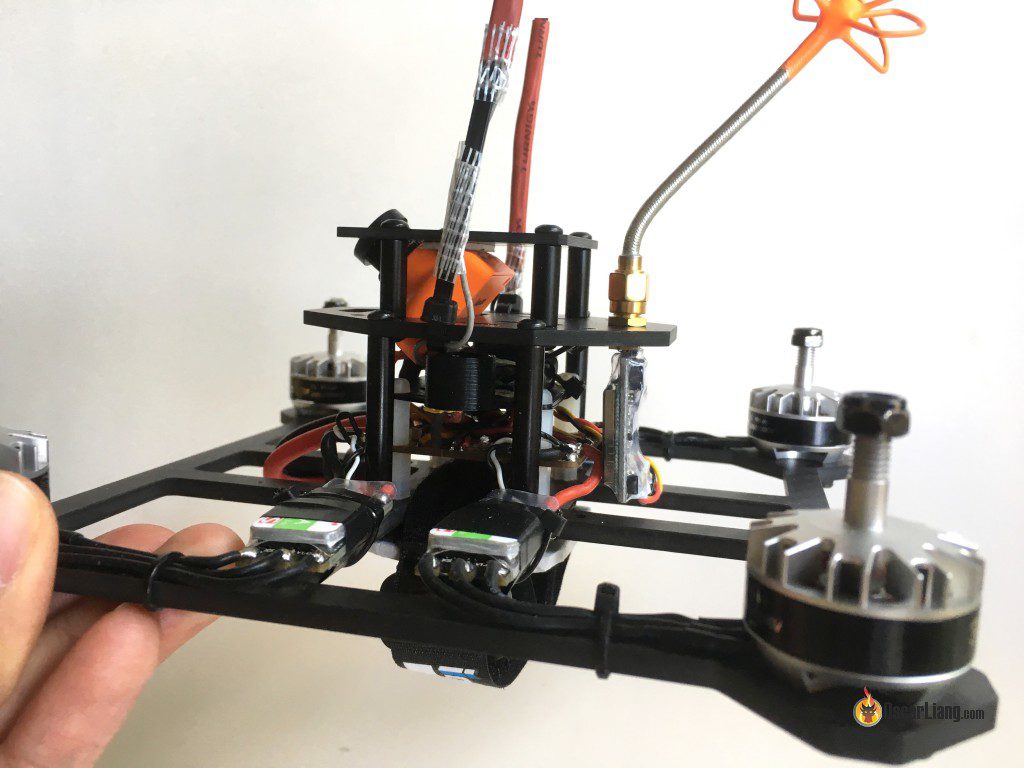 The Weight is 335g (excluding battery and HD camera).

You might have noticed, I rotated the board 180 degree around yaw. Because if I had installed it the normal way, the XT60 cable would get in the way of the VTX, so I had to spin it around.

That comes the problem, the ESC signals are at the 4 corners. I already cut the ESC wires short, and soldered them on the board, so I had to change motor outputs using motor mixer.

In CLI, change to:

So far so good, I will come back and update after the following weekend, how good the FC is in terms of noise filtering, user experience and performance.

So far so good, it flies! Power filtering works great and video is clear, no noise or anything, even though I am using a pretty powerful setup (2600KV with 5″ props).

In terms of tuning, I am still trying to find a solution to the CPU usage and multishot problems mentioned above. It does make a difference to me when you run 8K/4K Multishot and 4K/2K Oneshot125. :D

Nice wrieup! Those solder joints on the Kombini looked pretty cold though, you might want to crank the temp on your iron up a bit.

it has a missing diode, don’t think re-work the soldering would help.

for people who are interested in more of my frames designs