How to use BJT Bipolar Junction Transistor – Beginner’s Tutorial 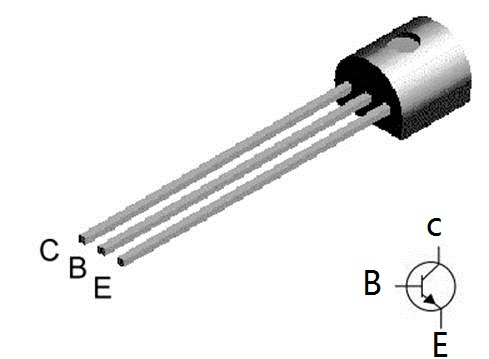 What is BJT? BJT (bipolar junction transistor) are widely used an amplifier, oscillator, switch etc. It is a current-driven device (MOSFET is voltage driven), the output current is equal to the input current times a factor which is called Gain. A basic BJT has three pins: the Base, Collector, and Emitter.

The output characteristic curve is useful as it shows the variations in collector current, Ic for a given base current, Ib over a range of collector-emitter voltage, Vce. This gives us the modes of the BJT under different conditions. There are three modes in BJT – Forward-Active (Amplification), Saturation, and Cut-off. 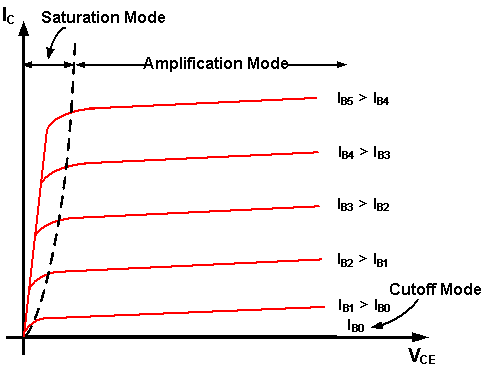 Saturation: high current conduction from the emitter to the collector. This mode corresponds to a closed switch. This could be also used for resistors simulation in small circuits.

Cut-off: the biasing conditions is the opposite of saturation (both junctions reverse biased) which corresponds to an open switch. The cut-off and saturation can be used together to form a digital (1 or 0) type of circuit for computers.

Forward-active: This is the linear region of the curves (shown as amplification mode in the diagram). The collector-emitter current is approximately proportional to the base current, but many times larger, for small base current variations. BJT amplifiers uses the Forward-active characteristics.

You might wonder whether you should use BJT or MOSFET, check out the argument here.

How to use BJT?

Current-limiting resistors are usually used between the Arduino (or other micro controllers) and BJT to prevent damage and over heating from large current. Protection diodes are also sometimes used in case of Back-EMF from an inductive load. 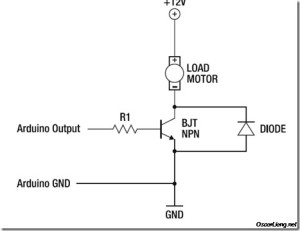 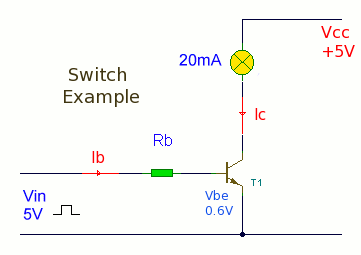 When used as an amplifier, the biasing is arranged so that the transistor operates in the linear region ( shown above as almost horizontal sections). An amplifier will usually be biased to about half the supply voltage to allow for maximum output swing.

There are two types of BJT transistors PNP and NPN based on  the doping types of the three main terminal silicon layers.

2n2222a NPN transistor is a simple low-side amplifier switch. It can be fully switched on with only a few milliamps of current and it can switch nearly 1 ampere.

How does BJT work in theory?

A BJT is formed of a three-layer sandwich of doped semiconductor materials, either PNP or NPN. Each layer has a specific name, i.e. collector, emitter and base.

The proper biasing of the junctions when operating is the functional difference between a PNP transistor and an NPN transistor. For any given state of operation the current directions and voltage polarities for each kind of transistor are opposite. For example in an NPN transistor, when positive bias is applied to the base, the equilibrium is disturbed between the thermally generated carriers and the repelling electric field of the n-doped emitter depletion region. This allows thermally excited electrons to inject from the emitter into the base.

Some insight into BJT calculation and more theory.

Difference between a bipolar and a uniporal device ?

not exactly what I was looking for, but hey, this page is a good job :D

Qote: “Bipolar junctions transistors is current controlled which means a smaller current at the base controls the main current at the collector and emitter”

Funny observation:
A voltage of VBE=0.7V is always needed to “open” the transistor – but at the same time it is statet that the BJT would be current-controlled. This is simply false; or do you think that – as an example – 3 charged carriers from the base current are able to set free (control) 300 charged carriers forming the emitter current (assumption: beta=333).
I am always surprised that such false “explanations” can be found in many documents.
Is it perhaps because the equation Ic=beta*Ib looks so nice and simple?
So – should we completely forget Shockley`s famous equation describing the voltage-current relationship at the pn junction?