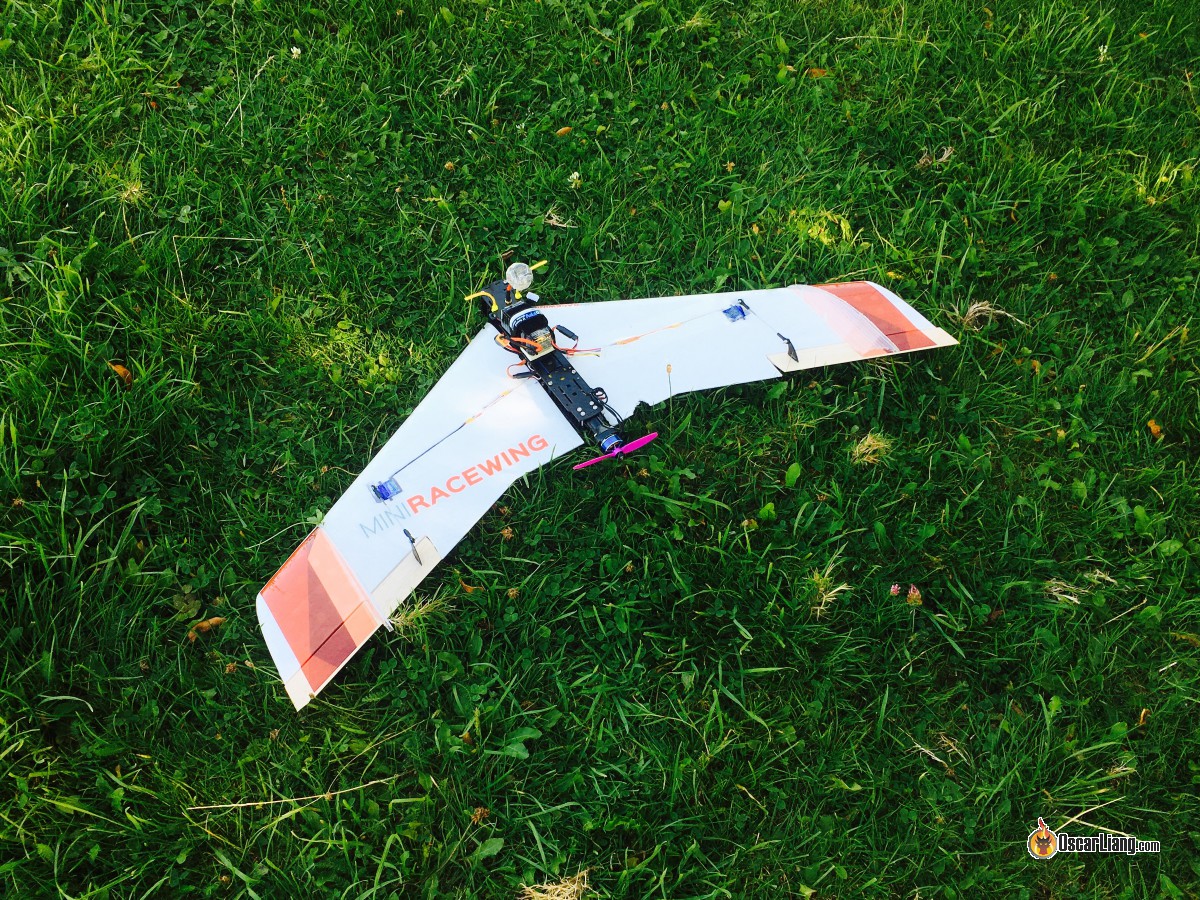 I am very excited and scared at the same time with this project. I will be building a fixed wing and attempt to fly it in FPV. I have absolutely no idea and experience with wings so I am expecting some explosion and blood in this one :)

Update (Jan 2019): If you are new to wings, I’d recommend the S800 instead because it’s way cheaper and slightly more robust. See my build log here.

Many thanks to Flybot for trusting a noob and providing me with the Mini Race Wing. You can find out more about this product or purchase it on their website: http://flybot.de/en/miniracewing-kit-fpv-race-wing

The wing comes with everything you need except the electronics, and all the parts are nicely packaged. The wings are made of foam, the elevons are made of balso wood, and the frame is carbon fibre.

I am new to fixed wings, but I was told many mini quad motor and ESC should work fine with this wing. On Flybot’s website they suggest a few different motor/ESC/Battery setup that gives you different top speeds, so that’s an useful guideline for what kind of speed you can expect from your own setup.

For the motor, I believe anything between 2205 to 2207 2300KV to 2600KV should work fine. I decided to use Sunnysky R2306 2600KV just because I have a spare laying around. To pair with this motor I am using 5045 two-blade propeller. I found this setup to be relatively efficient and doesn’t draw more than 25A of current during flight.

For the ESC, it needs to meet the current requirement of the motor and prop combination, and it also needs to have built-in 5V BEC to power your servos and RX. Old ESC should be fine, all those fancy stuff like “active-braking” or “hardware PWM” etc don’t mean much to a wing :) I will be using a 4-year-old Hobbyking 30A ESC.

For receiver, you should use one with at least 3 PWM channels (throttle, elevator, aileron). SBUS or PPM are not useful in this case unless you are using a flight controller with it. D4R-II would be an ideal choice for the job.

For assembly you will also need these tools: 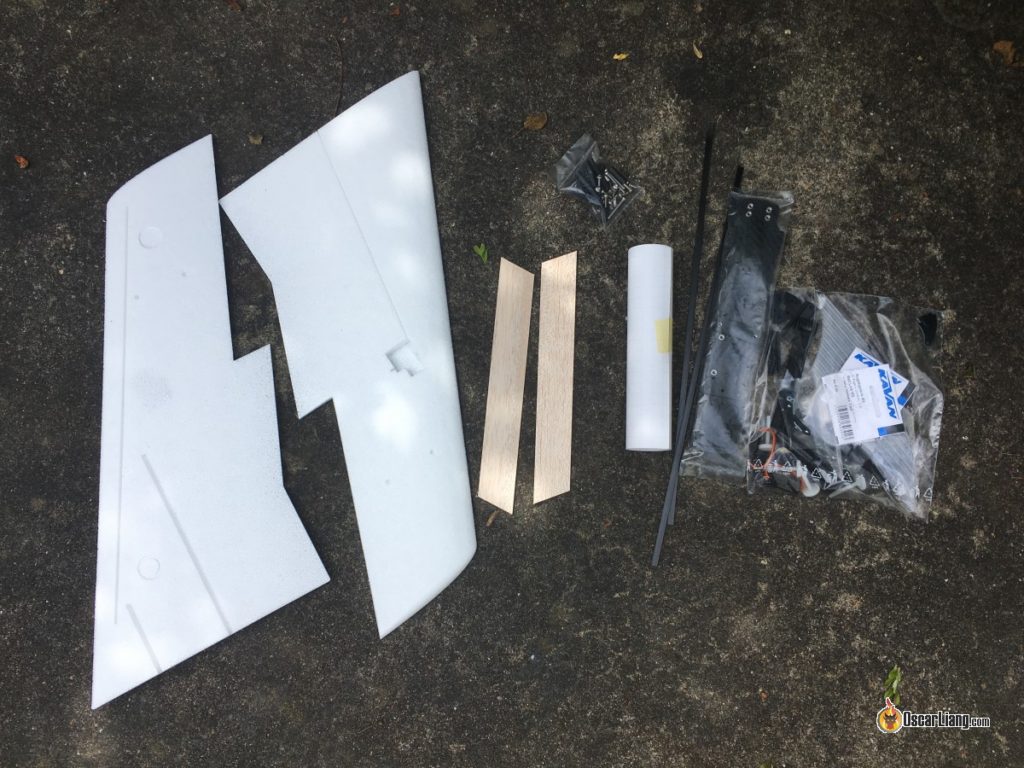 So I started putting this wing together by following Flybot’s official manual. The manual is quite simple and I wish they could’ve included more images, or even a build instruction video. As a complete wing beginner, I found myself taking a long time just trying to figure out what the instructions mean. However I don’t think it would be a problem for those who has already built a RC plane before.

Here I super-glued the carbon rods to the wings for better rigidity and strength, and cut the slots in the elevons to insert the rudder horns later. 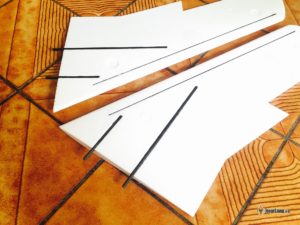 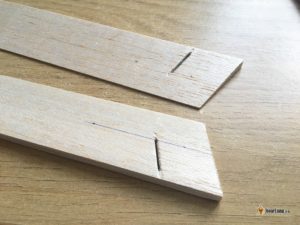 Then attached the elevons to the wing using scotch tapes. 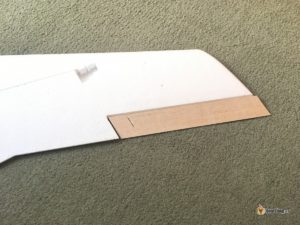 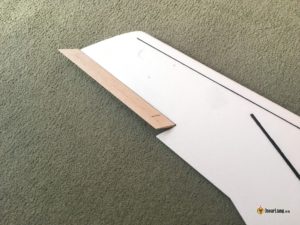 Here I started working on the servo linkage. I was asked to cut these metal rods to a certain length, which wasn’t easy to do without the right tools. For me I had to use a file to make a small cut then snap it by hand.

Quite a few things in this wing rely on user DIY, which I think can totally be done by manufacturer before the product is shipped. For example, this rods cutting, and the elevon slots. I asked Flybot about this and hopefully they can make it a bit more user friendly in the future. 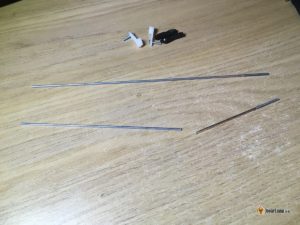 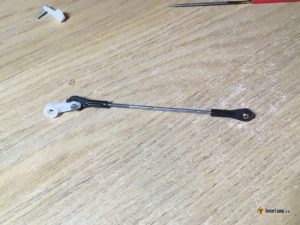 To make sure the length of the linkage is right, I tried it with the servo first before they were glued in the wings. 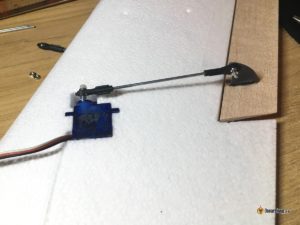 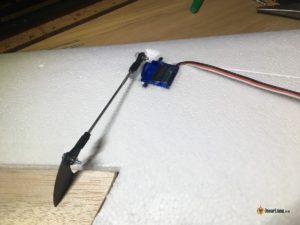 I realized the servo wires weren’t long enough, so extension was required. I think the wires should be around 27cm-29cm long excluding the connector. Once that’s done, I hot-glued the servos in place. 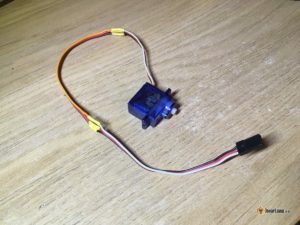 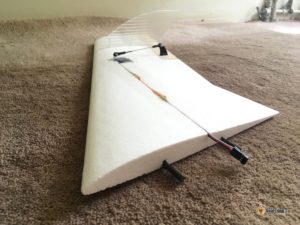 And finally put the MINI RACE WING decal stickers on and I had successfully assembled the wings. 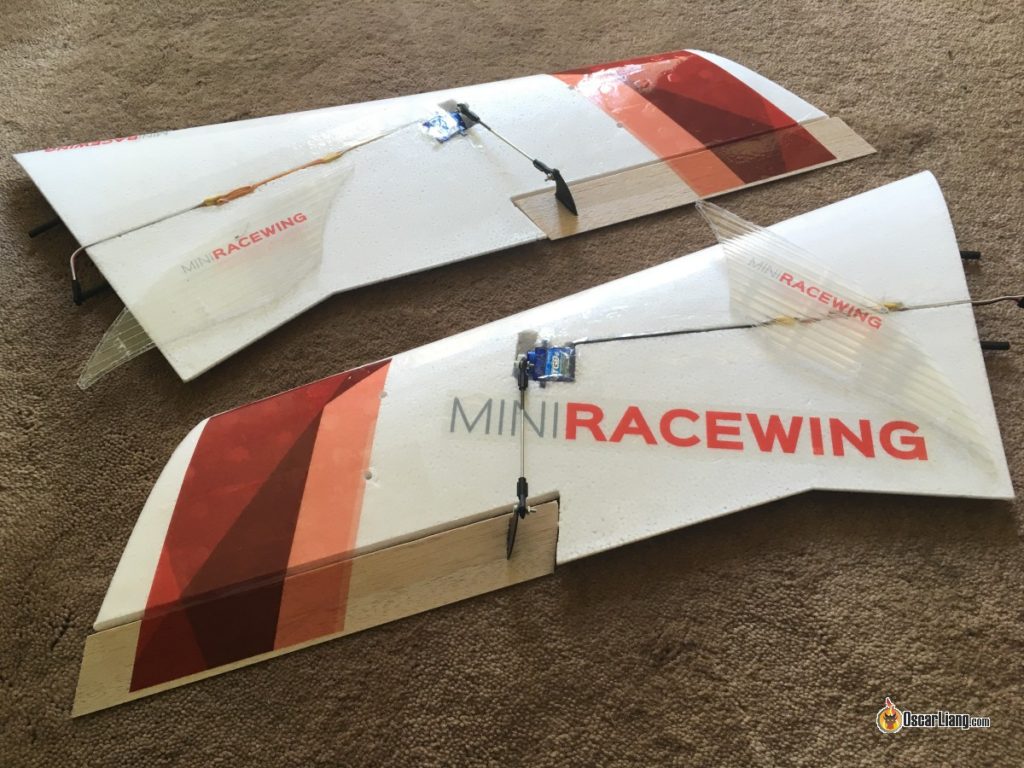 The connection is relatively simple, your battery powers the ESC, which then controls the motor. The ESC powers the receiver (RX), but receives signal from the RX’s throttle channel, while the servos are connected to and powered by the RX.

Here I soldered the motor and ESC together. Note that if you cannot change motor rotation in the ESC, you can do that by swapping two of the motor wires. Motor rotation is important because it determines which props you should use (CW or CCW). 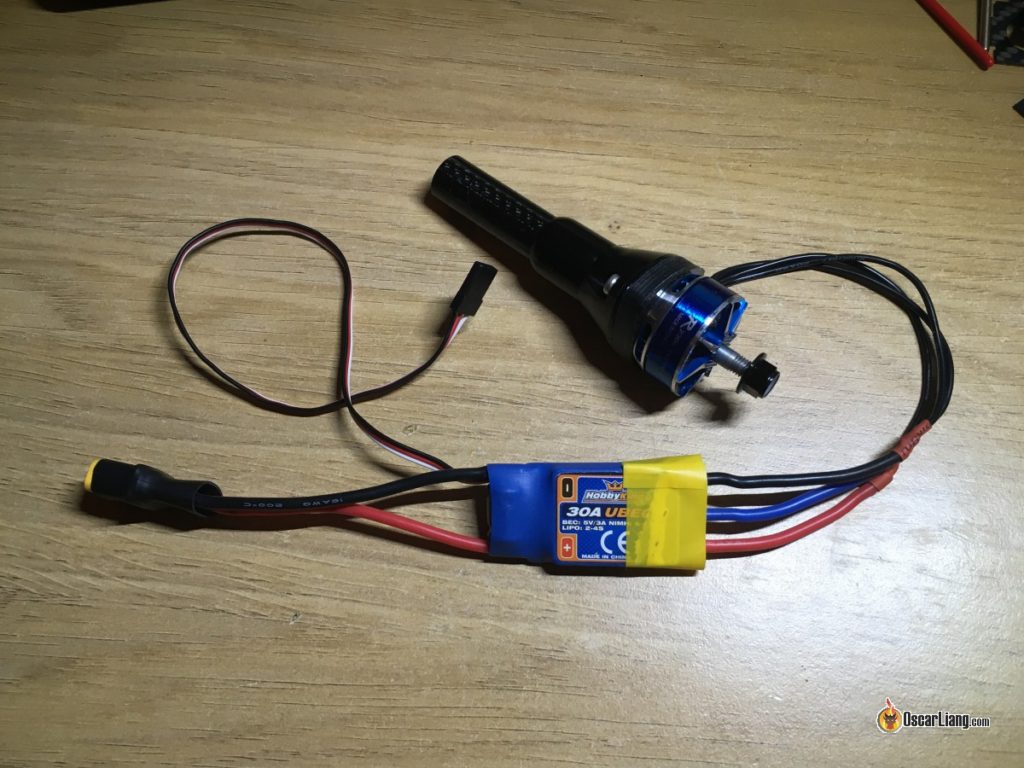 The FPV system is a separate branch in the connection diagram. I prefer using gears that can be powered directly from battery to avoid using voltage regulators.

To power my VTX and FPV Camera, I decided use a balance lead connector with an LC filter in between (to reduce voltage spikes and noise). Of course you could also just share power from the ESC to avoid the additional connector, but I like having the option to leave my FPV gear turned off if I just want to fly LOS. 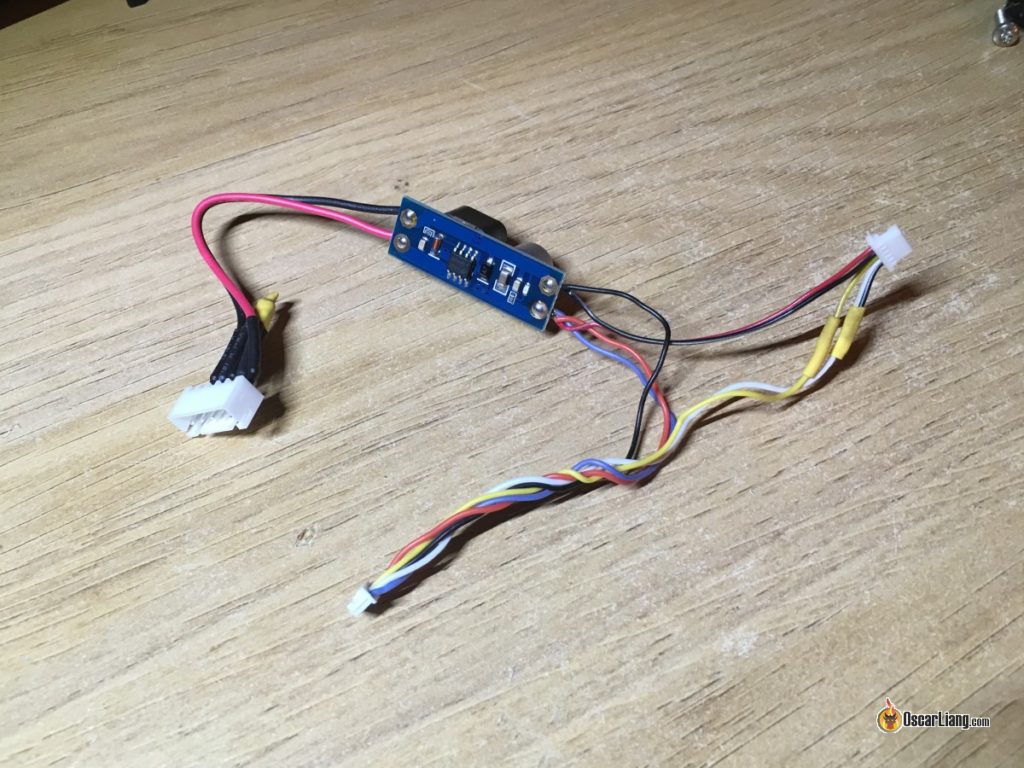 And here is how the main body looks like when I put everything together. 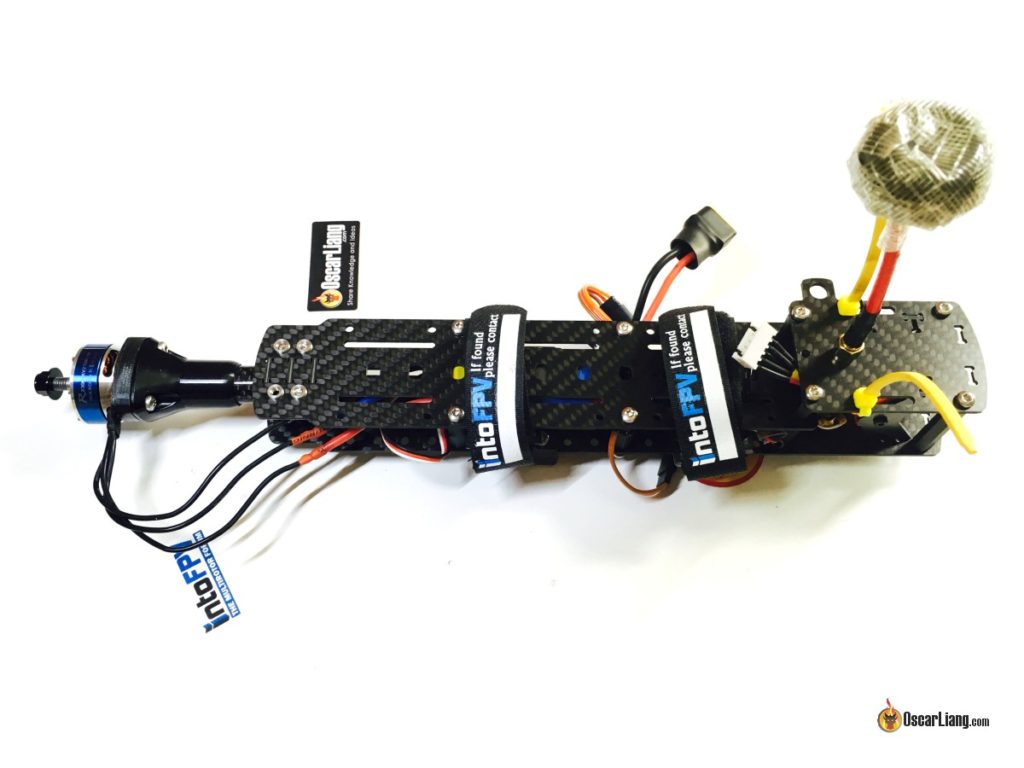 The Mini Race Wing builds and looks just like a mini quad. That’s what makes it so special IMO. :) 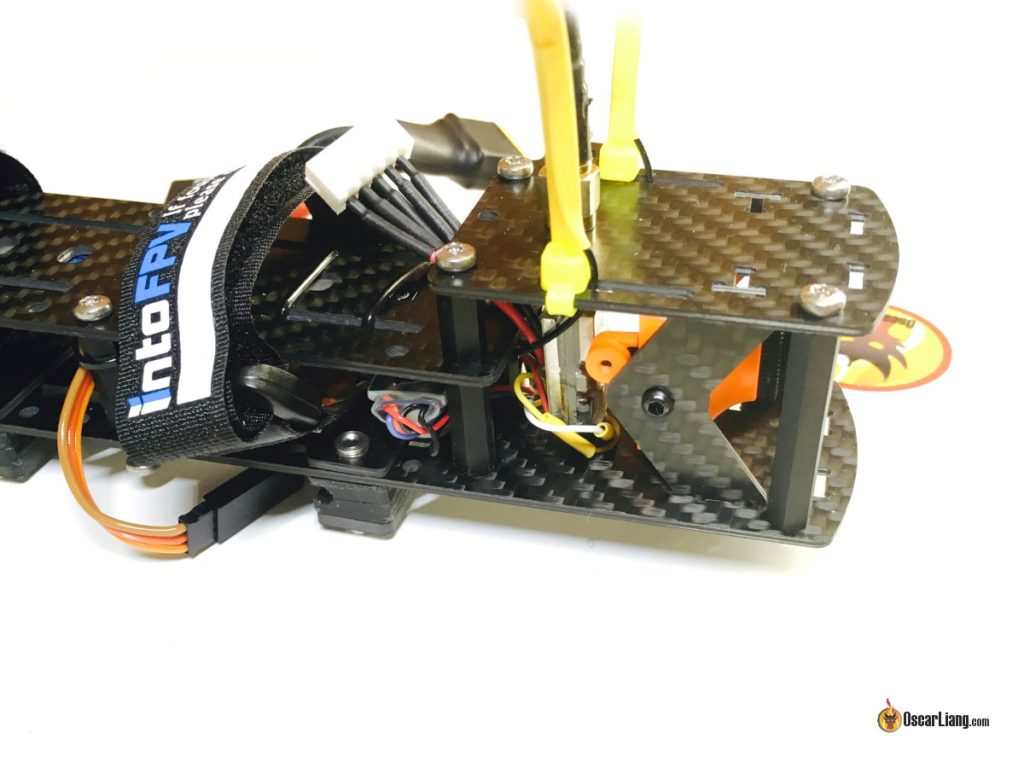 The wings are attached to the “wing mounts” (Carbon Rod Holders) at the bottom, and the servos are connected to the radio receiver with these extension leads. So in a crash, the wings can be detached and the servos can get disconnected from the main body to minimize the impact. 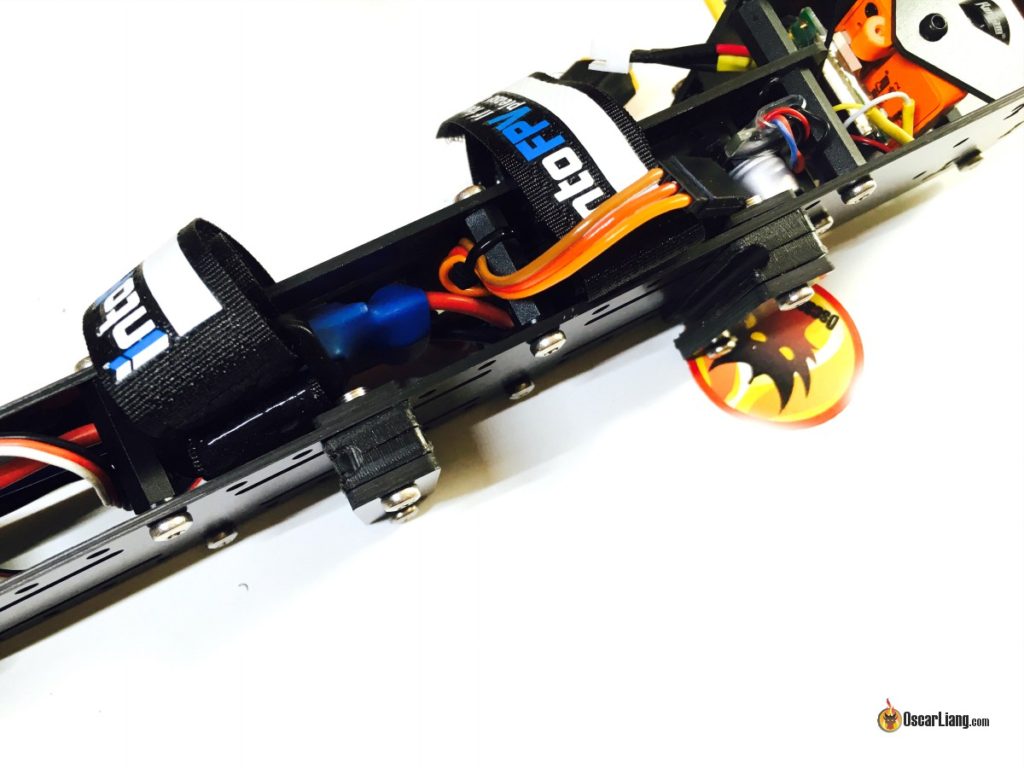 A closer look at the wing mount. 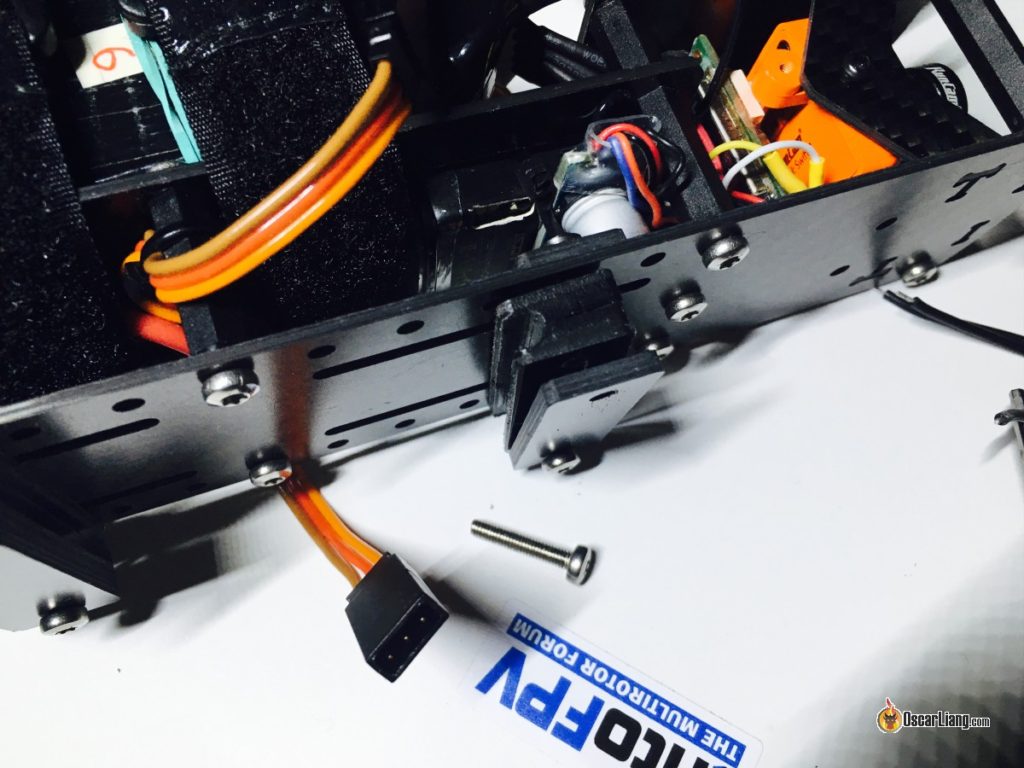 I mounted the wings, and marked where the COG is. 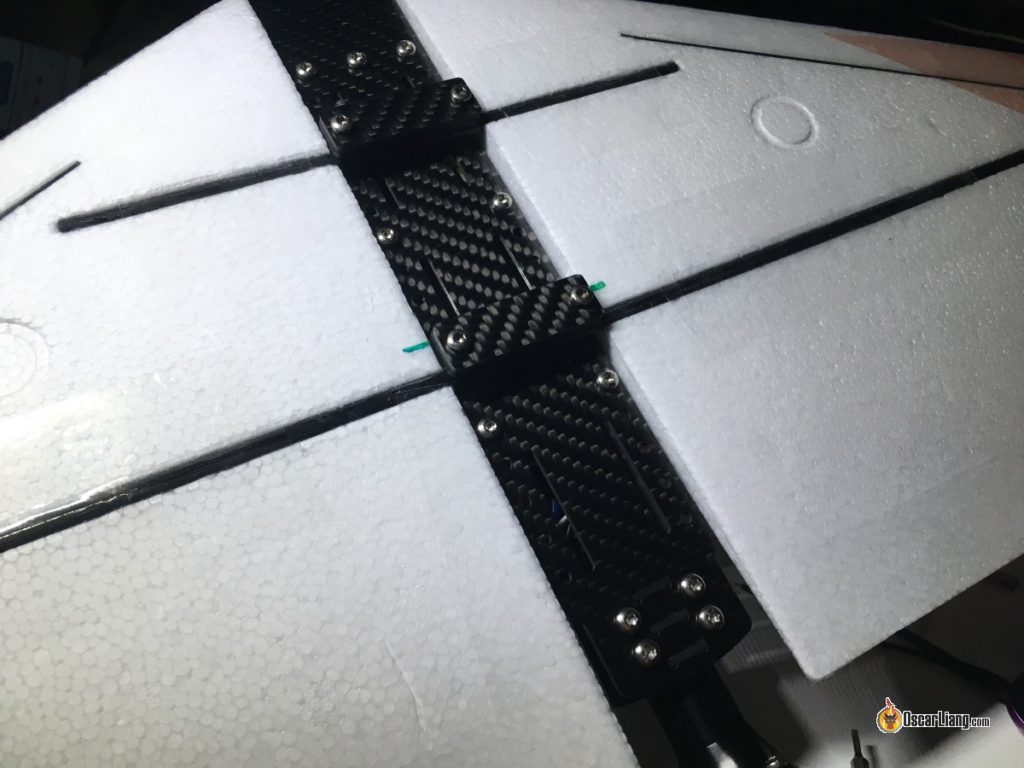 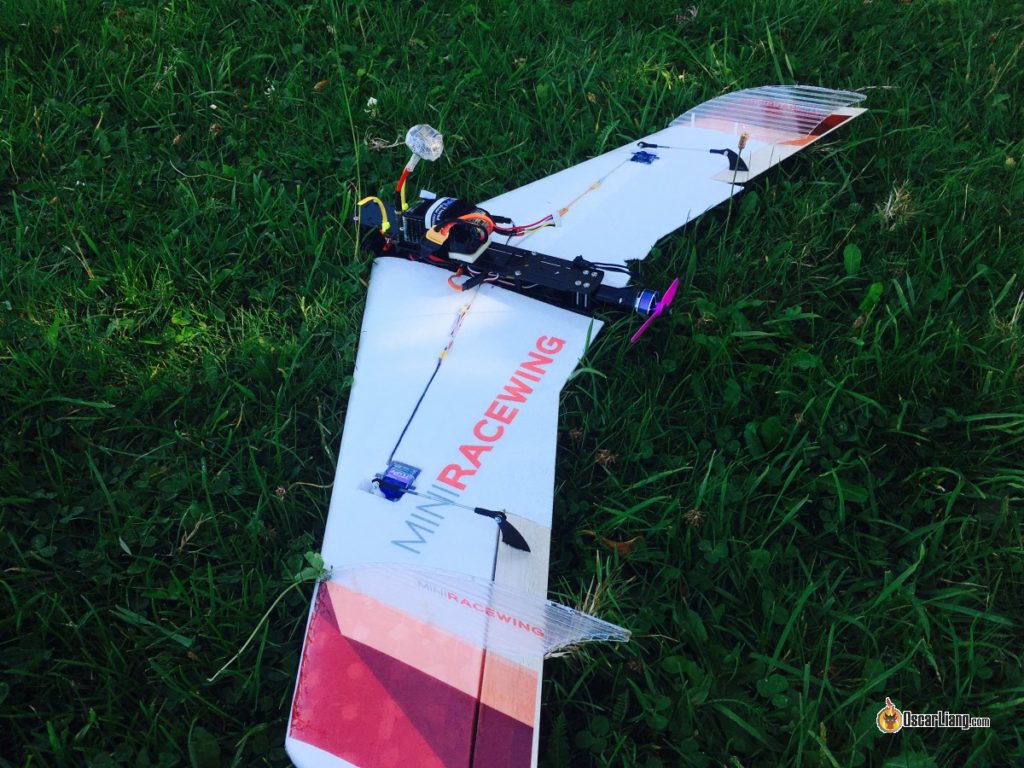 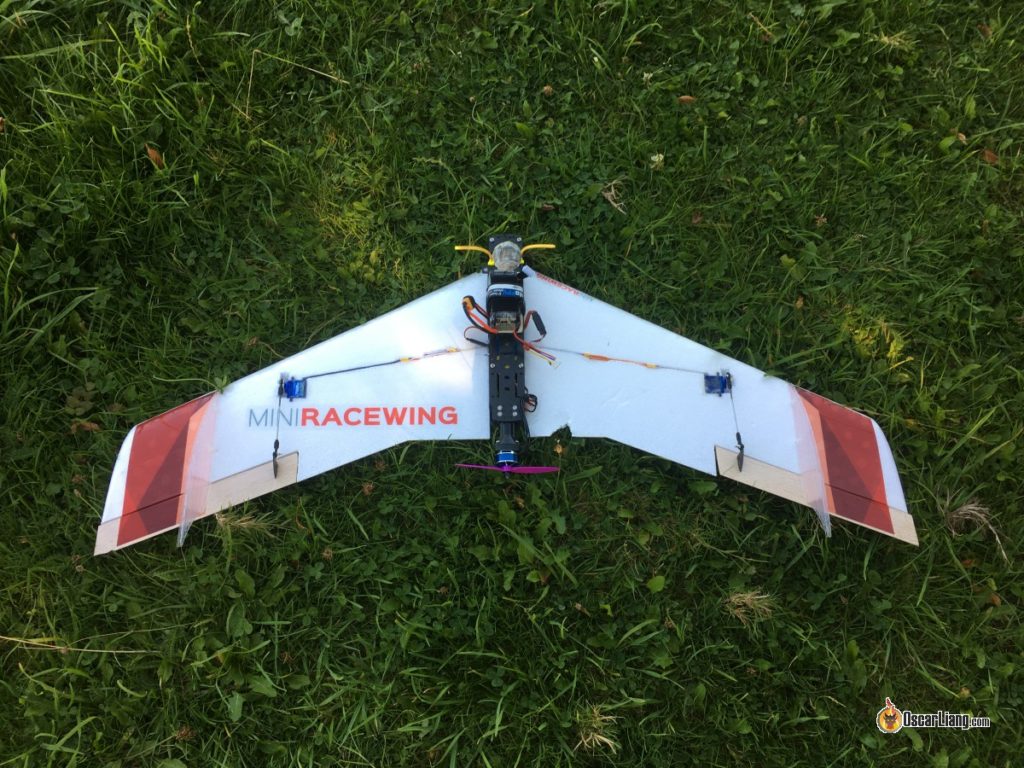 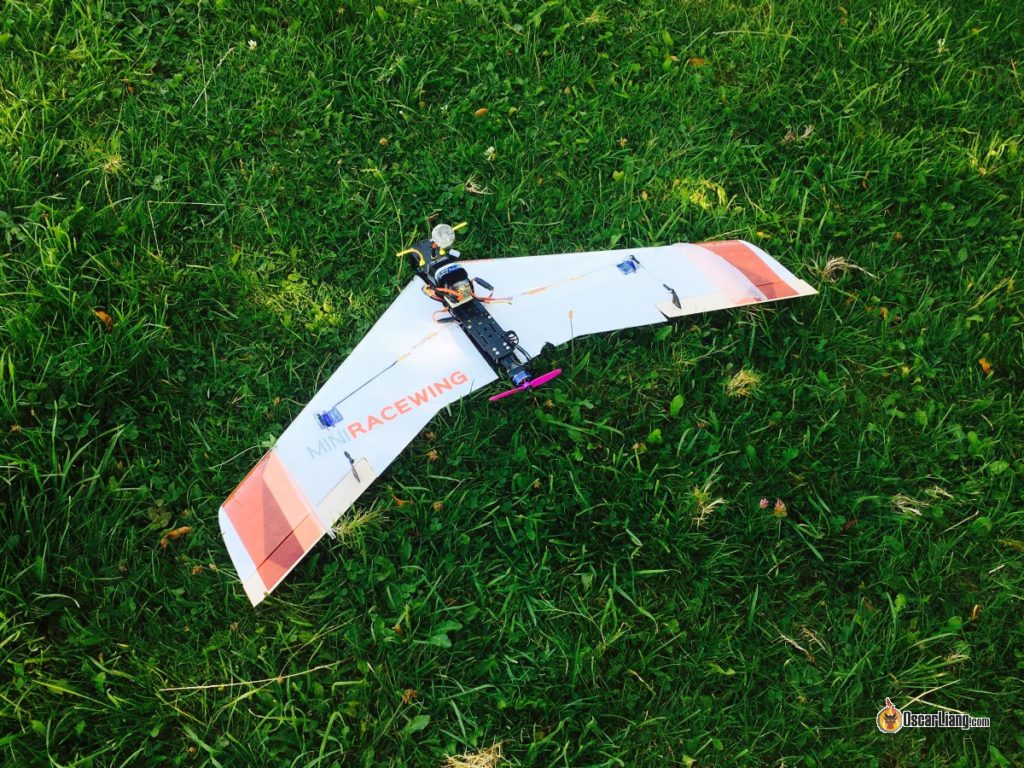 The wing weighs very heavy compared to other wings of the same size. It really forces you to go fast in order to stay in the air.

It’s really not the best wing for beginners, it’s too fast to someone flying LOS for the first time. :)

This is my first wing ever so there is a lot i still need to learn. Launching has been the hardest part, but once you are in the air it’s pretty easy and intuitive to control! I inherited lots of habits from flying quads, and I keep moving the yaw stick when I turn lol :D

This is my first flight with this wing:

Oh well, it can take some abuse, but it not immortal. Actually, I wouldn’t say it’s more durable than wings purely made of foam because when the fuselage breaks it’s much harder to fix as it’s carbon fibre.

See here in the pictures, I broke both the top and bottom plates numerous times, and I have been trying to fix them by sticking small carbon fibre pieces on both sides with epoxy. It keeps the original shape but won’t last long in further crashes.

I could buy spare parts, but they cost a fortune! A bottom plate is £19 plus £10 shipping.

I really like this wing, but it’s getting frustrating for me having to spend hours fixing it after every crash :) So I decided to move on and I am getting an S800 :) I will do a review on that when it gets here.

When is this post from? I wish you had dates on these :-) How did the maiden go? I have one of these that flies pretty good, but the main body isn’t very well designed sadly.. I have several friends with the same wing and they have all managed to completely destroy the middle section in crashes.

The date is at the bottom of the post :)
I’ve had time to actually fly it after my first flight. It took me a few days to finally take off, but it’s so bloody fast I think it’s not a good idea for beginners :D
Yea every crash it just break apart and what’s supposed to be the strength becomes a pain in the butt :D