As explained briefly the types of memories in Arduino, RAM (or SRAM) memory is the type that get ignored most easily, because there isn’t anywhere you can find out the usage footprint (well i should say not easy to find out). It usually hardly run out so we tend to forget about it. But if you do run out of RAM memory, your sketch will not work properly on your arduino, sometimes it doesn’t even allow you to upload the code.

Here I will show you how you can check the memory usage of your Arduino sketch, and a few things you can do to optimize Arduino memory usage.

What Happen If I Run Out Of RAM on Arduino?

If you run out of SRAM, your program may fail in unexpected ways; it will appear to upload successfully, but not run, or run strangely. To check if this is happening, you can try commenting out or shortening the strings or other data structures in your sketch (without changing the code). If it then runs successfully, you’re probably running out of SRAM.

On the Uno we have 2KB of RAM, and 8KB on the Mega2560. Notice that there’s not much SRAM available in the Uno. It’s easy to use it all up by having lots of strings in your program. For example, a declaration like:

This puts 20 bytes into SRAM plus the ” terminator (1 extra byte). This might not seem like a lot, but it doesn’t take long to get to 2048 bytes.

Global and Static variables are the first things loaded into SRAM. They push the start of the heap upward toward the stack and they will occupy this space for all eternity.

Variables created in functions, are dynamically allocated objects and data. Unlike Global and Static variables, these variables can be de-allocated to free up space at function exit. But Every function call creates a stack frame that makes the stack grow toward the heap. This data is usable within the function, but the space is 100% reclaimed when the function exits!

In the arduino IDE directory there is the avr-gcc compiler. It also contains a tool named ‘avr-size’. Go to hardware/tools/avr/bin/ and it should be there.

When compiling, the IDE will create a temporary directory in your temp directory and copy all the C(++) files to it. For example in Windows 7, This is C:Users[your username]AppDataLocalTempbuild[random tag][Sketch name].cpp.elf

You need to run avr-size.exe, type the path to my temporary folder and hand it the elf file. 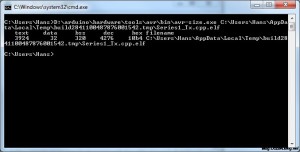 The output of avr-size looks very similar to this. The result means

This is a usually tool for fixed RAM allocations, however it’s important to realize that it does not count the RAM used by automatic variables local to a function or block which are allocated on the stack at the start of execution of that function and deallocated at the end. That can only be determined by executing (or simulating) a particular path through the program.

You can also find out Adafruit’s different method.

There are a few things you can do to address this problem:

Arduino Sketch Too Big Error – How to Reduce Sketch Size?