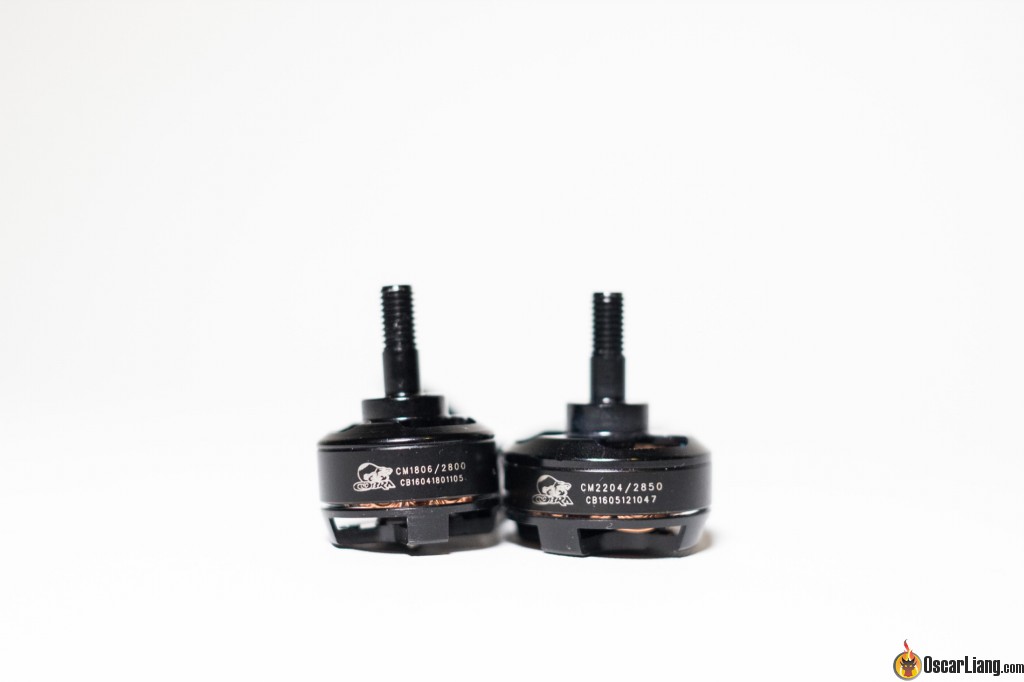 We have tested the newly released Cobra motors: 1806 2800kv and 2204 2850kv designed for smaller (150-180) frames and 4″ props. The tests was purely based on flying experience, with different props / frame sizes etc. Thrust data was not measured.

These Cobra motors are provided by Innov8tive Designs for testing, motors are tested and reviewed by Artur Banach. The CM1806 are small light weight mini quad motors designed to run 4″ props.

Motors came in the same box used for the previous 2204, 2206 and 2208 motors. Each motor includes a set of M3x5 motor mount screws and M3 lock nut with M3 washers. The foam package is extremely useful and can be re-used for various things. I personally like to use it as protective case for my GoPro/Xiaomi Yi, when attached to a mini quad :) 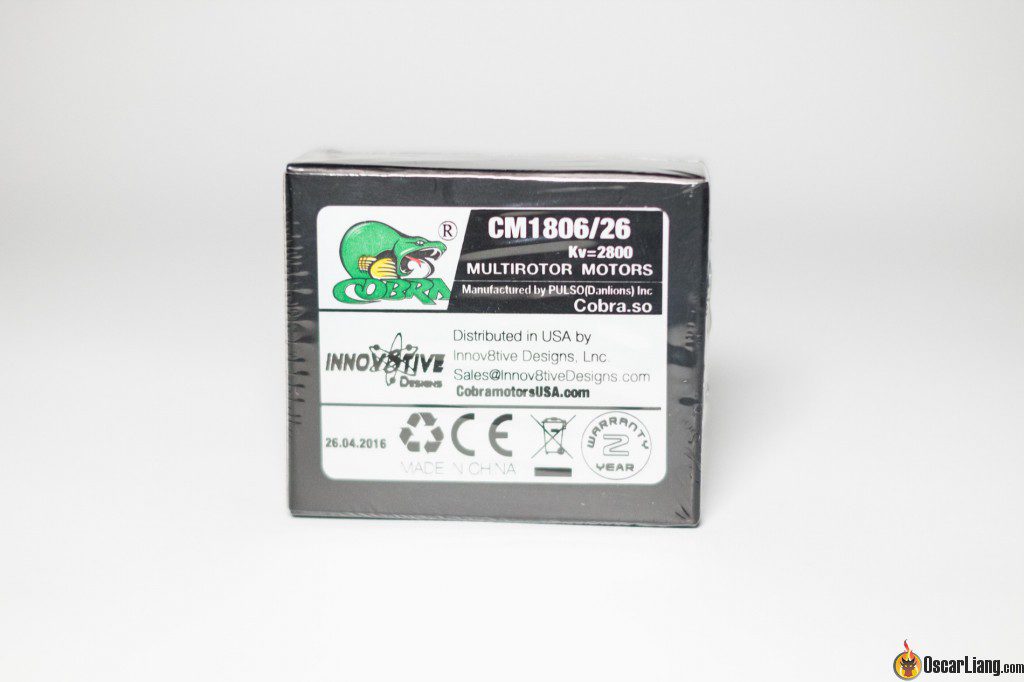 These are the first 1806 motors released by Cobra and it weights 21g excl. lock nut and washer. Compared to some other 1806 motors, they use M3 motor mount screws instead of M2. They have a very similar look to Cobra 2204 motors. 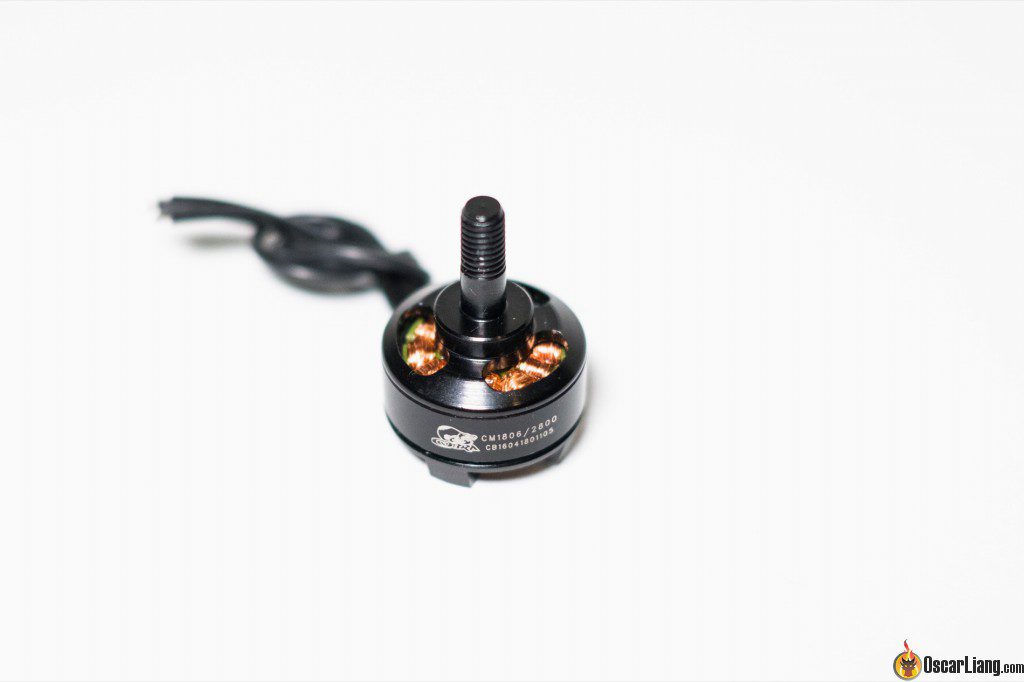 Build quality is excellent, motor material feels pretty solid. Bearings move smoothly and there is no vertical play in the shaft. 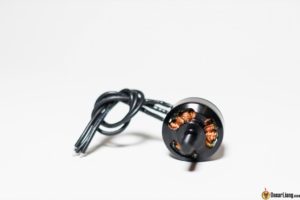 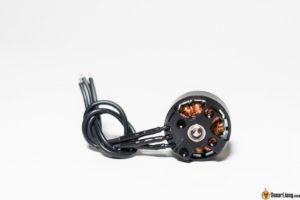 Cobra 1806 makes more sense on a 180 quad running 4″ propellers, because of the smaller size and weight. I have tested the 1806 on the following setup: 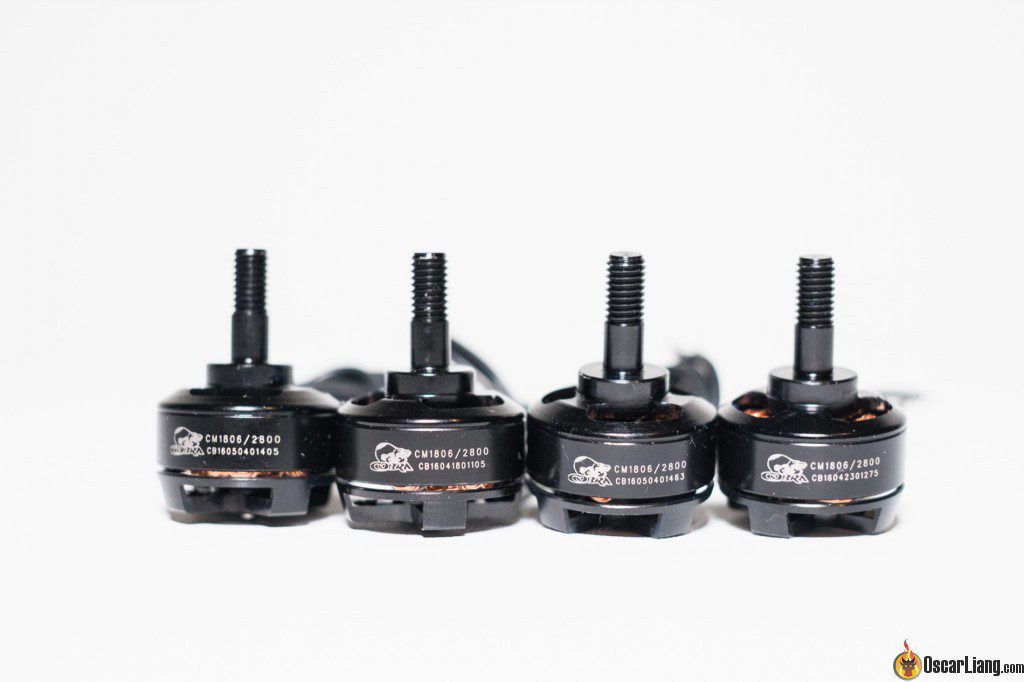 Flying the new Cobras 1806 was a blast. High KV paired with relatively low weight make it a powerful combination. Speed was great, even on 60-80% of the throttle and punch outs (100% throttle) were impressive. Agility on a small 180 frame with 4″ and those motors was very good.

That’s where smaller quads have an advantage over 5″ or 6″ quads – in close proximity flying, often in congested areas. Sound of these motors on tri props was insane. They scream literally :) 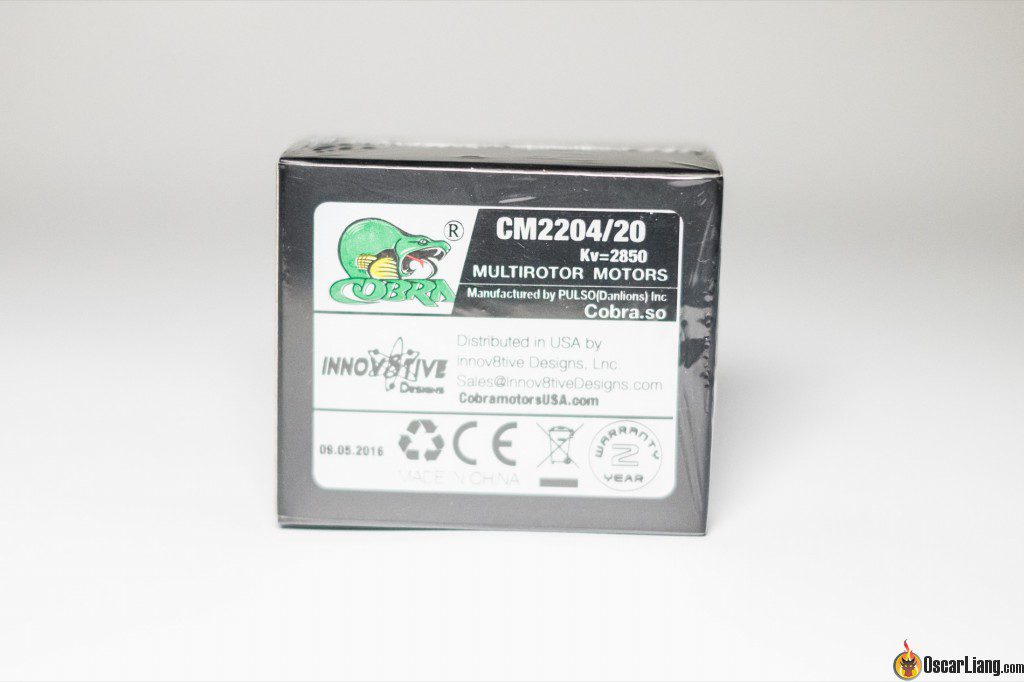 Inside we have a foam insert and set of M3x5 motor mount screws and M3 lock nut with M3 flat washers. 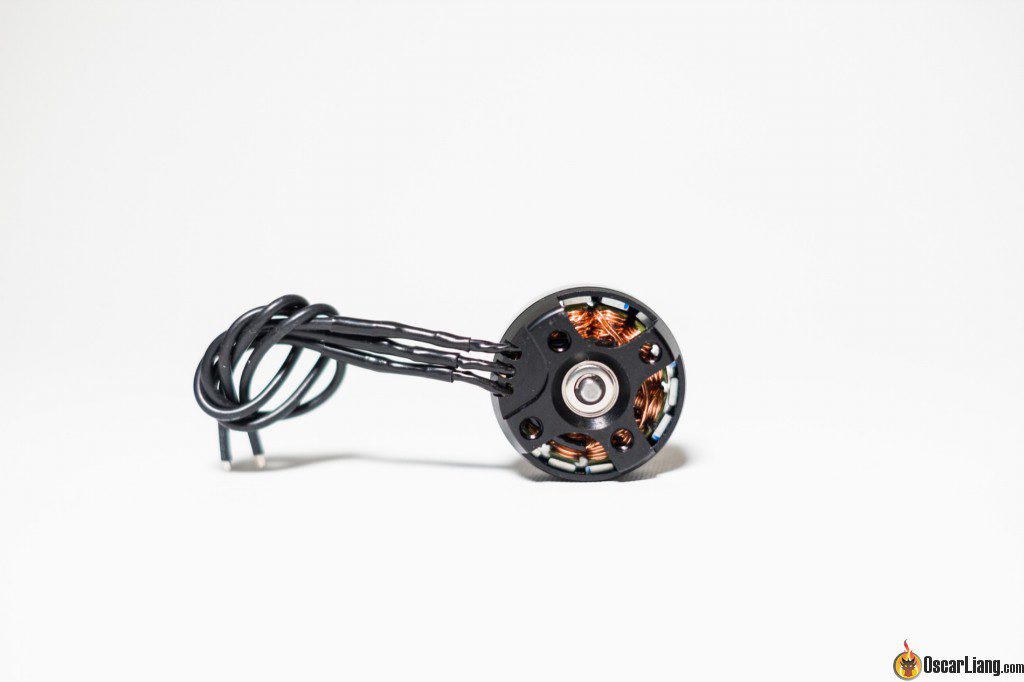 This motor is in fact 2205 as it was confirmed by Nick Sterling from Innov8tive Designs but 2204 number still appears on the bell and box and it looks exactly the same as other 2204 Cobra motors. The only difference is the KV value. 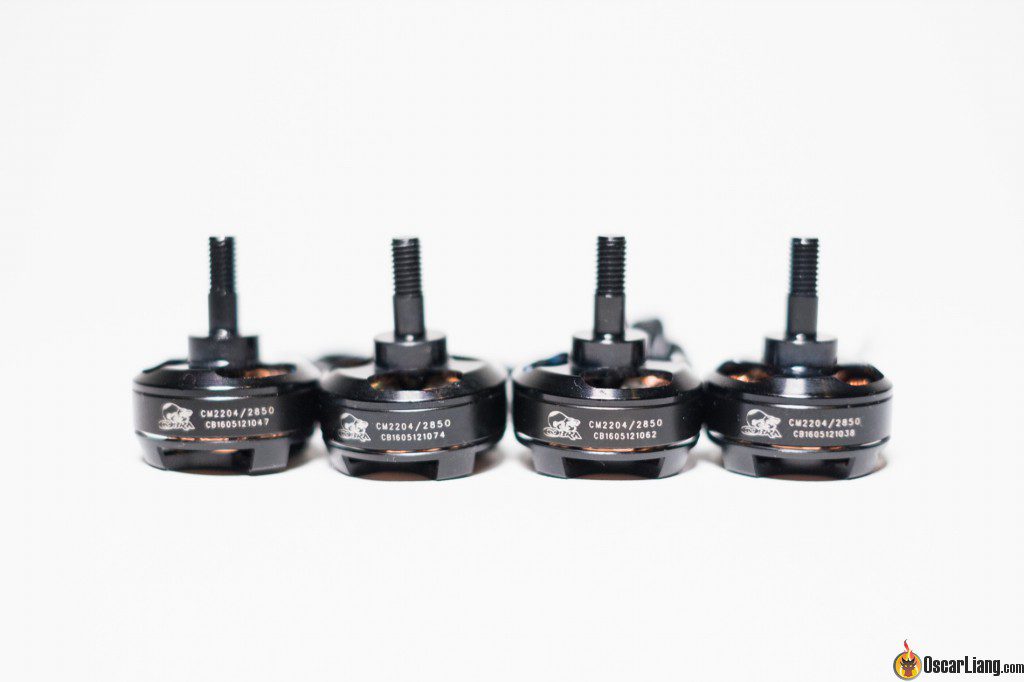 Build quality is on pair with other 2204 Cobra motors – excellent. Smooth bearing and no vertical play in shaft.

First tested Cobra 2204 2850kv on 180 frame. Weight difference vs 1806 on the same frame was about 20g. My impression was that, they were less snappy than 1806 on the same configuration on the lower throttle. But top speed was much better than 1806 motors and they accelerating much faster as well.

Because of high KV it is not a good idea to use high pitched 5″ props with those motors. For test I first used HQ 5x4x3, just to check how would this setup behave.

During the flight I could hear motors screaming but acceleration was insane. It was literally cutting through the air in no time. Instant and snappy response to the throttle. I tried to avoid pushing throttle to 100% but even at 60-70% motors were a bit warm, not hot, just warm.

I imagine running this combo for longer might damage motors/ESC’s. It was fun but it was mainly for pure science. Much better solution should be running  5040 two bladed props. This would be the optimal 5″ prop if someone was to run those motors with 5″ props. I have yet to test it.

In another test I put 4″ props on 210 frame. After the first flight I was pretty happy about the combination.

Using HQ 4×4.5×3 Durables props (optimal) generated a lot of thrust. I didn’t have to worry about how much throttle I use (unlike with HQ 5x4x3 props). Thanks to 4″ props and their smaller surface agility was insane but not as crazy as on 180 frame because of 5″ frame longer arms. I think that this is the optimal frame size for the motors and still allows to use 4″ or 5″ props, depending on the situation.

I really loved the 1806/2800kv’s but I found the shaft was very weak and chipped and broke releasing the c-clip and spinning the top bell off. Thankfully Innov8tive design has noted the issue and is working on replacing the bad motors, Something about it becoming weak after cutting the shaft for C-clip.

I enjoyed your review and especially the flight video – you’re right, these motors fly great!

Could you comment on the flight time with these motors?

Also, do you have any plans to perform thorough thrust tests on these motors like there has been with the Emax RS2205 and others?

Sam, this was testing of the motors and I did it to every detail, including boxes. Box content is explained in every review. I am sorry that you feel it’s pointless to you.

What has happened, your blog posts have gone from being helpful and full of information to completly pointless.

They come in a nice box and fly well…. and and they look good from the outside.

Chill, this post is written by a guest writer and he put in much effort in writing this article to share with the community.
He tried his best to describe how he feels about these motors. Take what you think is helpful, if you have any question or anything you disagree just let me or Artur know.