The confusion around DAL brand

There have been many questions about DAL prop branding in the FPV community, and whether DAL, DALRC, and DALProps are the same company. RadioC emailed me and help clear up some of the confusions, and it’s actually an interesting read :) If your next DAL prop feel different this might be why.

Original message from RadioC (RadioC agreed to publish this message on my blog):

I think the community need to know what happened with the DAL brand, as things are about to get confusing. Maybe everybody already knows this, but I don’t think so. We stock products from both Surveilzone and DAL and I have no allegiance to one over the other.

So last year Surveilzone started getting props made by a factory in China. This factory had figured out the nylon mix for the unbreakable prop, and closed Surveilzone (SZ) to buy them. Surveilzone ordered the props, which were branded as “DAL”.

The props were a major success, and Surveilzone was selling lots of them.

Meanwhile the factory continued looking for other customers, and soon started supplying their DAL prop to many other shops around the world, along with other products which they branded as DALRC.

Surveilzone was not happy about that, they also supply wholesale, and wanted the sale of all DAL prop to go through them. They had done all the work to make the DAL brand known, so wanted control of it. The original factory was unwilling to agree to a sole distributorship with Surveilzone, and wanted to keep selling stuff under the DALRC brand.

Surveilzone decided to cut ties with the original factory, and try to take control of the brand. (Notice almost all the other DALRC stuff has disappeared from the SZ shelves), and instead started pushing the props as “DALPROPS”.

A new factory was brought in a few months ago by Surveilzone. They created a new website, Dalprops.com, and started denying that the original props were genuine DAL. The props material mix is almost identical to the original, and they say DAL on the prop, however they are no longer original DAL prop from the original factory.

Props from the original DAL factory as it stands no longer have DAL printed on them as of the last batch.

That’s what happened. So the real “DAL” props from the factory we all know as DAL are no longer using the branding DAL. Props from the new factory SZ are using now say DAL or DALPROPS on them, but are not original DAL. However, they are so close to the original, it almost doesn’t matter and i’m yet to hear of any reports from the community of one being better than the other. Over the next few months as various shops all using mixed suppliers start supplying slightly different “DAL Prop”, the community ought to know why.

It’s only fair to present both sides of the story, so here is the response from DALProp.com 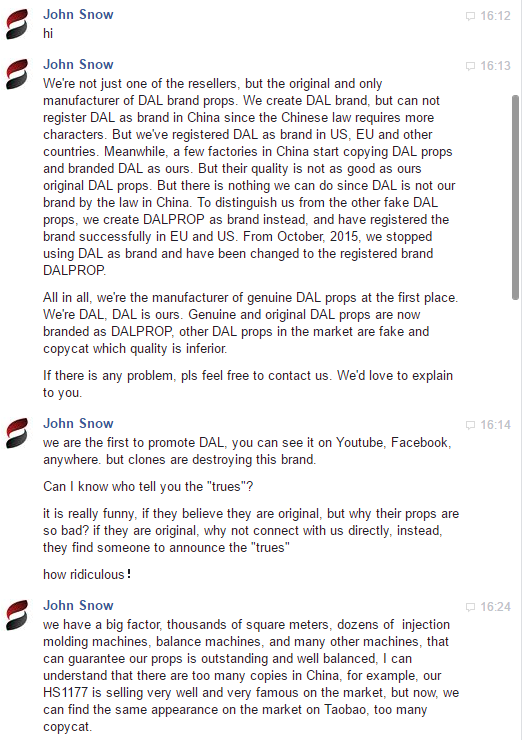 Hey, you folks at the (now called) DALPROP company. The way you make money in a world the Chinese will copy your product is to make your obviously better and improv it at a FAST rate of speed. Brand your with something VISIBLE, not some tiny letters but something that can be seen at arm’s length. Make the buying experience so much better.

For example there is a wasted opportunity in the DALPROP website where the”prop finder” has been
coming soon” for too long. This COULD be the go-to place for those new people trying to understand propers theory and how to match them with motors. Put a ton in information out there some written for beginners and some written for people with engineering backgrounds. You could do much better, new props every few months and a ton of test data on-line that can be searched. Fix the explanations. Currently EVERY 5 inch prop has the same description that in effect says “suitable for a 5 inch copter”.

Give me a reason to buy your stuff rather then the copies. Publish some data so I can determine what is best (blackbox data would be really good) Give us grams per watt and amps for a set of motors and battery volts for each prop. Make it all easy to search with links to your products so I can buy directly from the test-data pages. Technical articles that link to your products. But most of all NEW PRODUCTS at a rate the Chinese can’t follow.

As an example you’ve your customers zero way to decide between even different 3-blade props you make, Let alonewhyI should buy your prop vs. a copy. Spin them all up and measure the differences and I should see that yours is best. and then which one of yours in best for my use case.

Ha! I find this very comical. If anything that this John Snow is saying is true than the double standards he possesses are absolutely hilarious! Copy this, copy that…we are real, they are fake…they are copy cat not me, blah blah blah. The copy cat are not same quality….blah blah. Go to their website and check out these links:
surveilzone.com/FOXEER-SP-Racing-F303-Flight-Controller-for-FPV-Racing-g-1538

This guys is full of it. They’re not only copying the hell out of products their stealing the descriptions of said products straight from the manufacturer they “copied” and while they were at it they made bad copies! Now after checking those links check out these.

They copy everything! Turns out he’s just got chronic diarrhea of the mouth! Keep on with your lies and double standards buddy. You are truly a class act.

Just read the other guys statement he don’t even know how to speak or wright the way us Americans do .Its cut and chopped english they always sound funny when they leave out the little words….lol

Personally, DAL isn’t much of a brand to me. Only DAL product I’ve purchased was their early DAL 600mw transmitter that lasted maybe two flights before crapping itself from overheating, similar experience to everyone else. rcgroups.com/forums/showthread.php?t=2300647