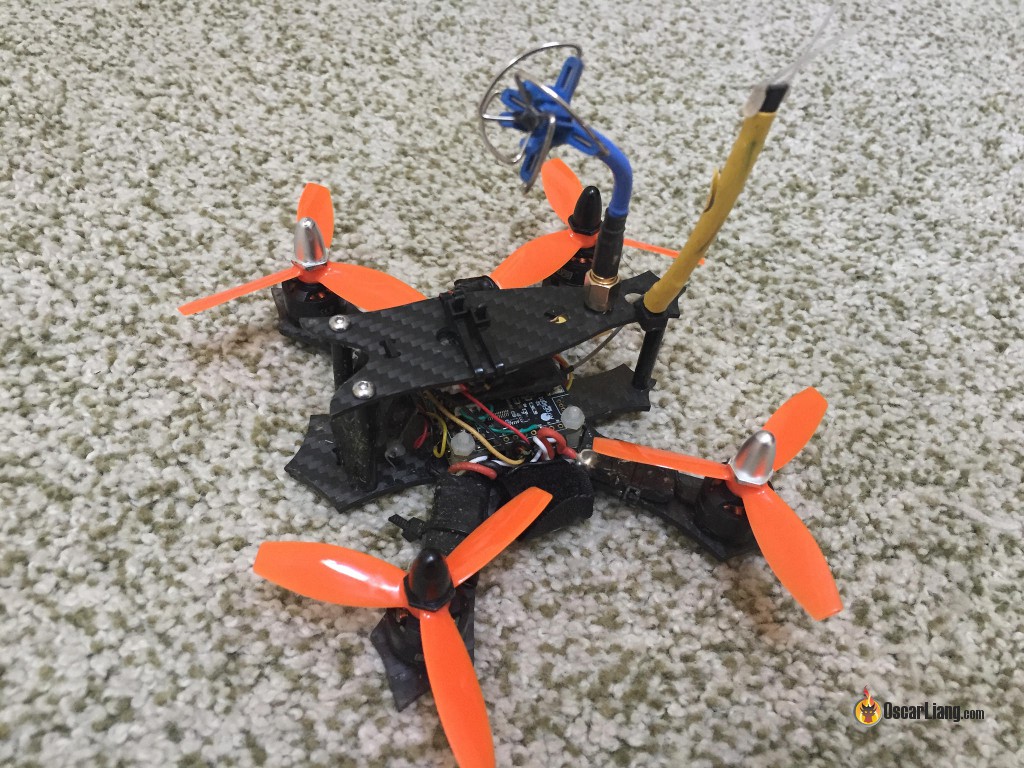 A couple of months ago Shabbir was on holiday and while he was there, he built himself a Shrieker. The quad is tiny but very fast, Shabbir later converted the Shrieker into a more tame, indoor flying micro quad.

Originally I was on the fence on which mini quad frame to pick since there were a lot of option. The Rotor X Atom was really cool, but it seemed a little too small for my building comfort, and the large vertical clearance of the Shrieker seemed like a roomy micro build so I ended up going with that.

I built the Shrieker for 4S, with the following parts:

And man, was it a ROCKET! It came out at just around 250 grams with the 4S battery. I would land after exactly four minutes of aggressive-normal flying, and my cells would be at around 3.75-3.8 volts by the time I got home.

Charging the pack up again would put in 700 mah, so I was pretty happy with the flight time.

Even though the build was so tiny, it flew incredibly fast and was a joy to fly. I did a little speed test on the flying field’s runway(about 120 meters long):

And this is a video of some smooth flying I was practicing:

After about a month in the USA, it was time to come back to India. I already had a ZMR180 (now dead) for outdoor flying and considering that the monsoons were about to start and there was going to be 4 months of non-stop rain, I decided to convert the Shrieker into a more docile build that I could fly indoors (not at home, but in a large hall). 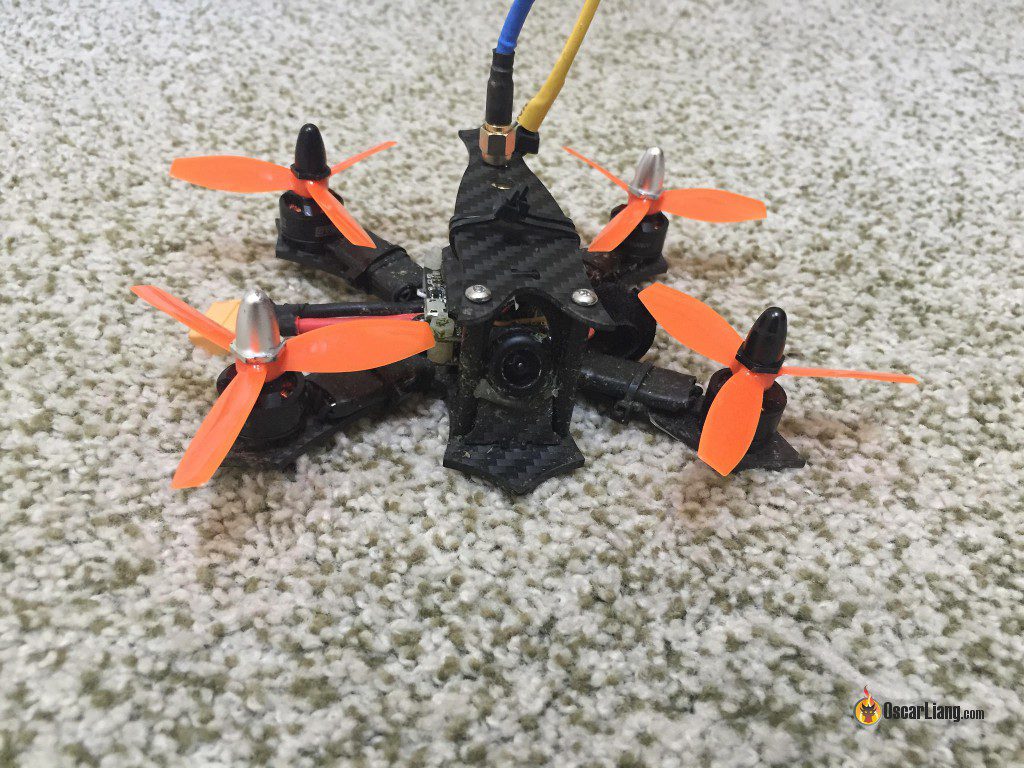 Note: The 1104 motor wires are very thin, just a single strand of copper. They are very delicate as such, so be careful when you solder them! I mistakenly pulled the silicon coating loose from where the wires go in to the motor on one, but luckily I had some small heat shrink lying around which I used to cover it up again.

The reason I chose 850mAh packs was for the added weight of the battery to make the copter fly slower, since I was flying indoors.

The 850mAh packs weigh in at around 75 grams. I know Stew from UAVFutures uses 450mAh Nano-Techs 3S on his first RotorX Atom, and it was very fast (on the same motors and props). The 450mAh packs weigh about 40 grams, so I figured the extra 30 grams would be a nice weight to keep the copter from going too fast.

At this point, the Shrieker itself weighed 137 grams without the battery, and around 205 grams or so with the 850mAh 3S battery. Not bad. 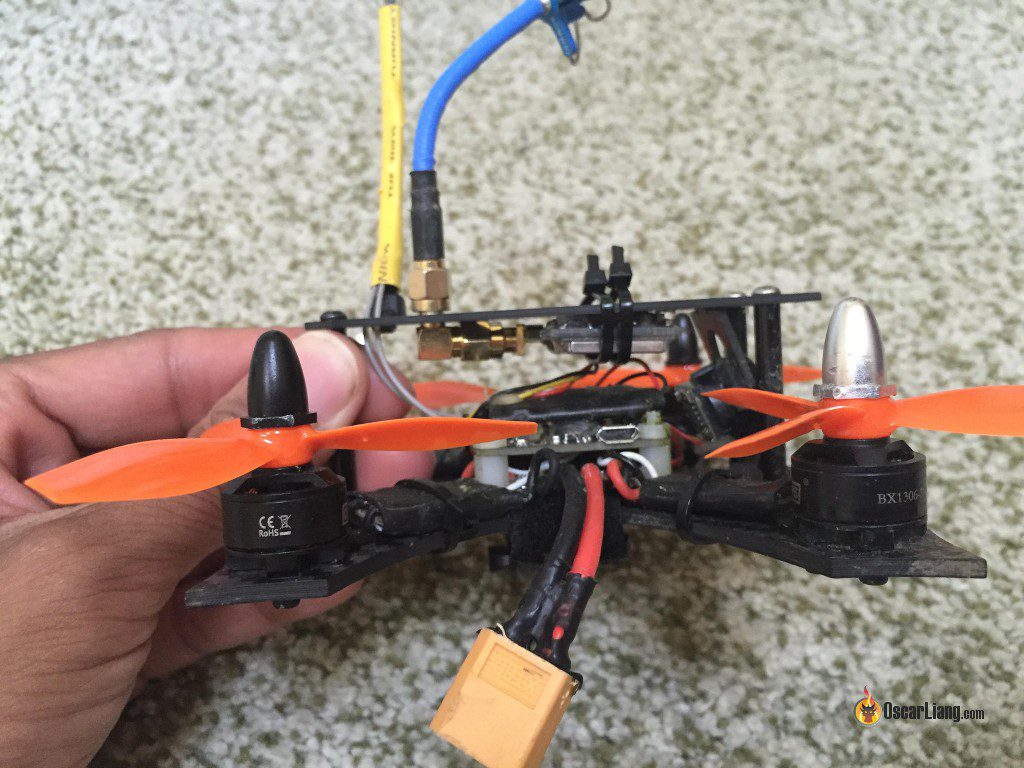 I took it out for a maiden, and it hovered at 50-55% throttle. Pretty good for what I wanted to do with it. It got 5 minutes of flight per pack, which was nice.

After a few days of flying it, it seemed a little sluggish even for indoors, so I did one mod to remove a little bit of weight. All of my antennas are SMA, and the store I bought the TS5823 from said it was SMA, but I ended up with an RP-SMA tx instead.

Thanks to Amazon, I was able to get a right-angle RP-SMA to SMA adapter in 2 days, and that’s how I was running it.

I did not have a scale handy at the time, but it felt like 10-15 grams. Wow! I removed the camera plate and mounted the camera flat, too, because the 25 degree tilt felt a little too much for flying in such tight spaces.

Now the copter hovers at 45-50% and is a bit more responsive. Here is a short video of an indoors flight:

The end result is a multirotor that is perfect for indoor flying but not so much for outdoors anymore. I tried flying it at a field on a windy day and the copter was struggling – a tailwind would push the copter around like it was nothing.

I also tried to do some flips and rolls but I ended up crashing because there is not enough throttle to “catch” it in recovery.

Once the rains are over, I could probably make it suitable for outdoors again by replacing the aluminium standoffs and steel bolts with nylon bolts and standoffs, and replace the batteries with 450 3S packs, which should save me about 40 grams and make the copter a lot more aggressive again!