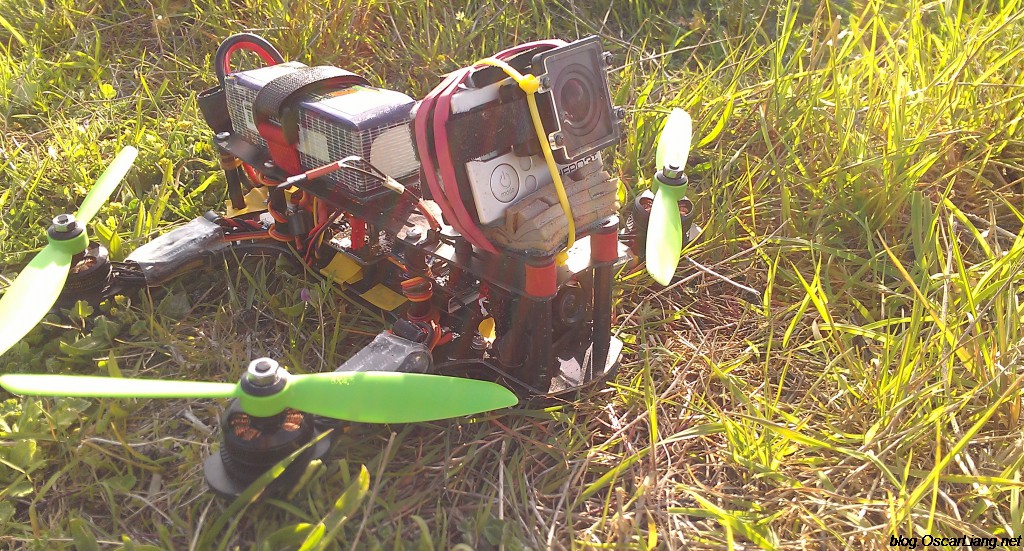 I was very excited to build this Demon EVO250 quadcopter, as this is going to be a powerful mini quad setup: running 6045 propellers on 4S.

In case you missed my review on this frame, here it is.

I will be building this Demon EVO250 mini quad frame with my usual, favourite parts:

After a PID tuning session, it flew really good !

And some racing practice with this frame.

And some practice session.

My current PID are

Just like any other builds of mine, I need to prepare my ESCs first, which is flashing them with either SimonK or BLHeli firmware. Flashing BS 20A ESC is the same way as to the 12A version.

Only concern I have with these 20A ESCs are size, and weight. They are almost twice as heavy as the 12A ESCs. Since the motor and prop combination I am going to use, will draw far less than 20A current, and I won’t put much load on the BEC either, I decided to remove the heatsink.

I also removed some of the unnecessary wires. 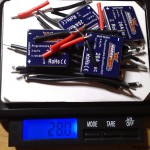 And I will be soldering the motor wires directly on the ESC pads. 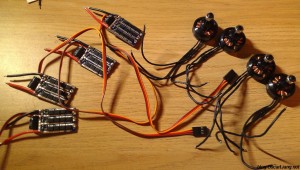 This is the first time I am using a built-in PDB on a mini quad, so I was looking forward to seeing a cable minimal clean build. Assembling of this frame is very easy, and I tinned all soldering pads on the PDB beforehand. 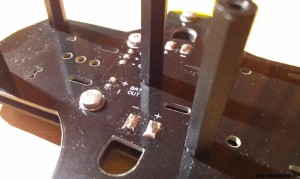 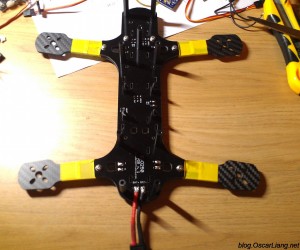 ESC mounting on Arms. I put a double sided sticker to secure the ESC, then wrap the ESC and arm with 20mm heatshrink tube. I like mounting ESCs on the arm, just under the propellers, so they get cool down when in the air. Some people like to keep them inside / between bottom plates, I really don’t think it’s a good idea if you are powering your electronics with the BEC, here I explained why. 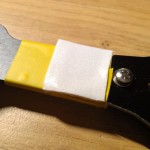 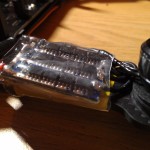 Soldering the ESC on the PDB. All the signal wires are hidden underneath the PDB, and will come out from the side. 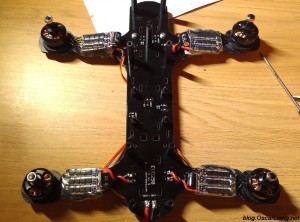 And more wires soldered to the PDB, for LiPo battery voltage measuring, FPV system powering etc. I don’t like exposed soldering joints, so for now I am using electrical tape to cover them up (yellow tape). Once I am happy with reliability, and make sure everything works, I will cover the soldering joints with liquid electrical tape for better appearance, and insulation. 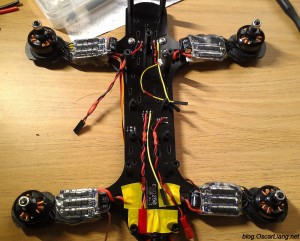 The simple PDB seems to be assuming we don’t use OSD, or maybe I understand it the wrong way. I had solder the power and ground wire of the FPV camera JST cable on the PDB, but leaving the signal wire on a female jumper wire. The camera signal will go into the MinimOSD.

I can adjust PID settings via OSD menu on the field. 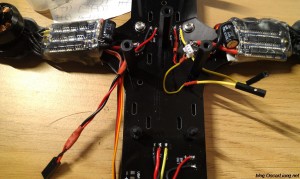 And here we installed the MinimOSD, VTX, mini voltage regulator (on top of the VTX). 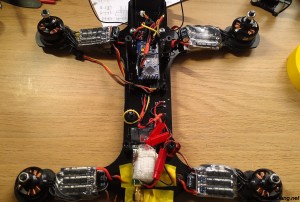 And I am making this tilted angle FPV camera with nylon spacers, vibration damping balls and 2mm cable ties. 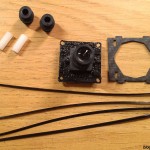 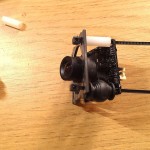 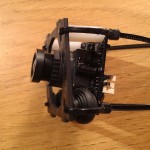 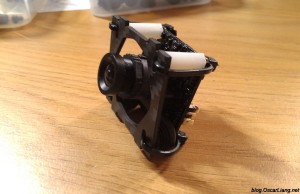 This is also my first time using tilted motor mounts as well.

When using angle motor mounts you don’t need to tilt your camera that much, some say it helps the speed but i actually don’t think it makes much a difference in that aspect, but I think it does improve aerodynamics especially when you fly forward fast, As you fly forward, the quad is not tilted as much, so air resistance is smaller.

The biggest drawback I think is the air flow from front motors causes disturbance to the rear motors, so the quad might behave weirdly sometimes, making tuning more difficult. 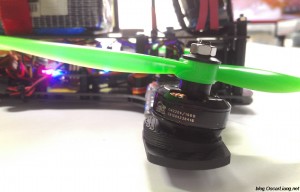 Total weight of my EVO250 build is 770g, including GoPro and Battery. 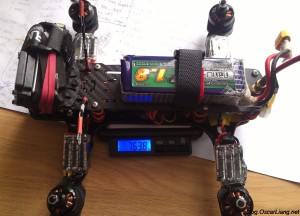 Some close up shots. 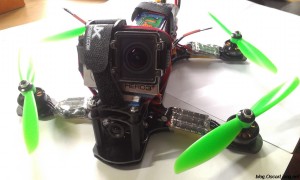 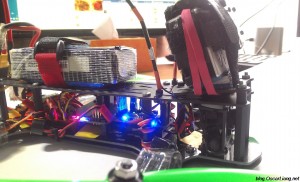 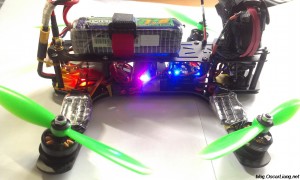 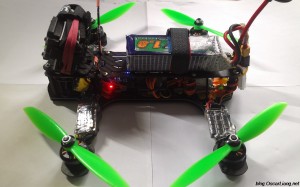 As I pointed out in the review, this frame is very well made and strong. It has a few hard crashes, I only broke a few nylon stand-offs so far. 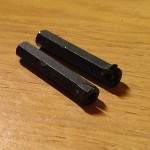 One of the crashes was caused by a very stupid mistake. Sharp edges on the soldering of XT60 plug punctured through the heatshrink, and caused short on the frame. Unfortunately the top plate is connected to the VTX ground, and as that happened, I was in the air and I totally lost video and crashed.

It’s very important to make sure there is not sharp or pointy edges in your soldering, where you need to cover with heatshrink tube, otherwise heatshrink become ineffective in insulation. 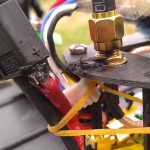 What are ESC, UBEC and BEC

What the flight time of this quad with its 1800 mAh battery?

hi oscar, flight time as supplied by the battery

Hi, Oscar, I currently hv a problem with cleanflight (NAZE32),
when I set Angel mode, the 1st motor spin crazy high, like 25% thr, other motors jst around 1200 sth, bt No1 motor rise to 1700…
But when I turn this mode off, everythings fine, all motors run good.
Don’t why, pls help, thx

sounds like ACC is not working properly? have you tried calibrating your quad on a level surface?
tried Horizon mode?
also try updating firmware? (back up your settings first)

“Hi Oscar” ,just checked out your build , wow i might have to considering doing a tear down, nice… great idea on the camera btw..i was thinking bout the 2300 kv s but now you got me looking at the 1960kv….btw could ya please send me a link for blheli 14 . i hear it may also stop my motors from twitching …need that extra edge this sunday at the races lol….

there you go, dl.dropboxusercontent.com/u/457167/Temp/BLHeliSuite14Betaa.7z
good luck with the race :)

Hey man, can you email me a link where to get the blheli 14 beta hex for the dys sn20a? Appreciate it. :)

What did you settle on for PIDs on this build? Just completed mine as well.

Still having trouble getting the PIDs on this build:

Any suggestions? Is the rocking from low I?

this is horizon mode? you can only tune PID in acro mode. also the jello is from how you mount your camera i think.

What is the motor to motor diagonal distance? With 6045s on, that doesn’t look to be a true 250 X frame (and maybe it isn’t supposed to be).

motor to motor distance is the diagonal motors distance. This on the Evo250 is exactly 250mm, so it’s a true 250 frame.

But not a 90deg by 90deg X then? A bit squashed like the front side of a deadcat (except front and back)?

Yeahhh , I like your build logs , we learn a lot of thing from your articles :)
For your short issue , the solution I found , is never attach the LiPo wires to any part of the frame , even if the silicon of the wires is strong , there is allways sharp part in any frame that can causes this issue , so I let the plug free to move , but not 2 km far from the frame :) haha :)

I think I was just unfortunate really… first time in 2 years :)

Very nice article as always. I can’t wait to build my own and thanks to you I think I’ll avoid a lot of mistake , thanks for that :).