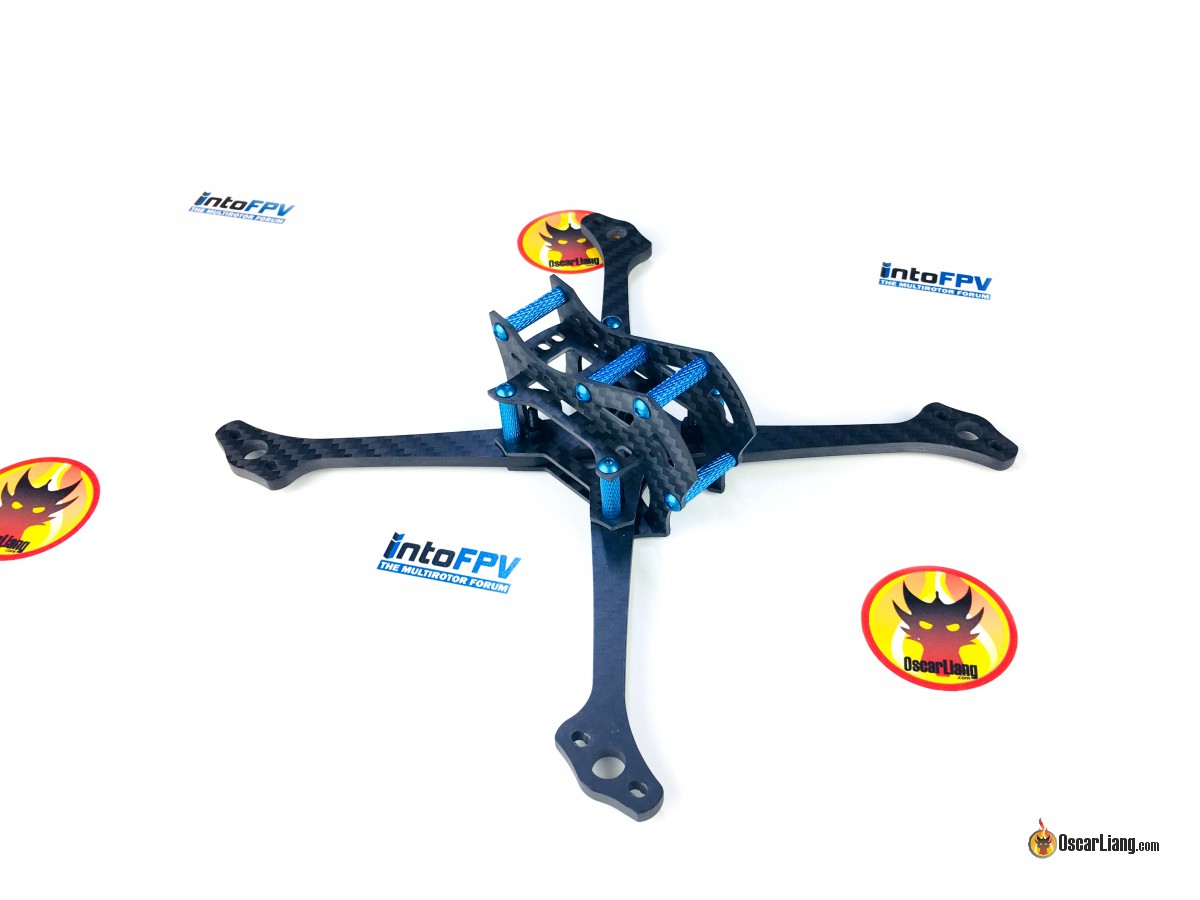 I had been searching for a racing drone frame for a few months, the Fury 5X Lite really caught my eyes with its unique design and impressive spec, so I decided to give it a try.

Further Reading: What differences does an ultralight racing drone make?

The Fury 5X Lite is a 5″ mini quad frame, which is basically the stripped-down version of the original Fury 5X. It weighs just over 50g assembled, which is pretty amazing that DemonRC pulled this off using all carbon fibre. Many other light weight frames often use 3D-printed canopy that can break easily in a crash, and just looks ugly.

Further Reading: Learn about the basics of mini quad frame in this guide. 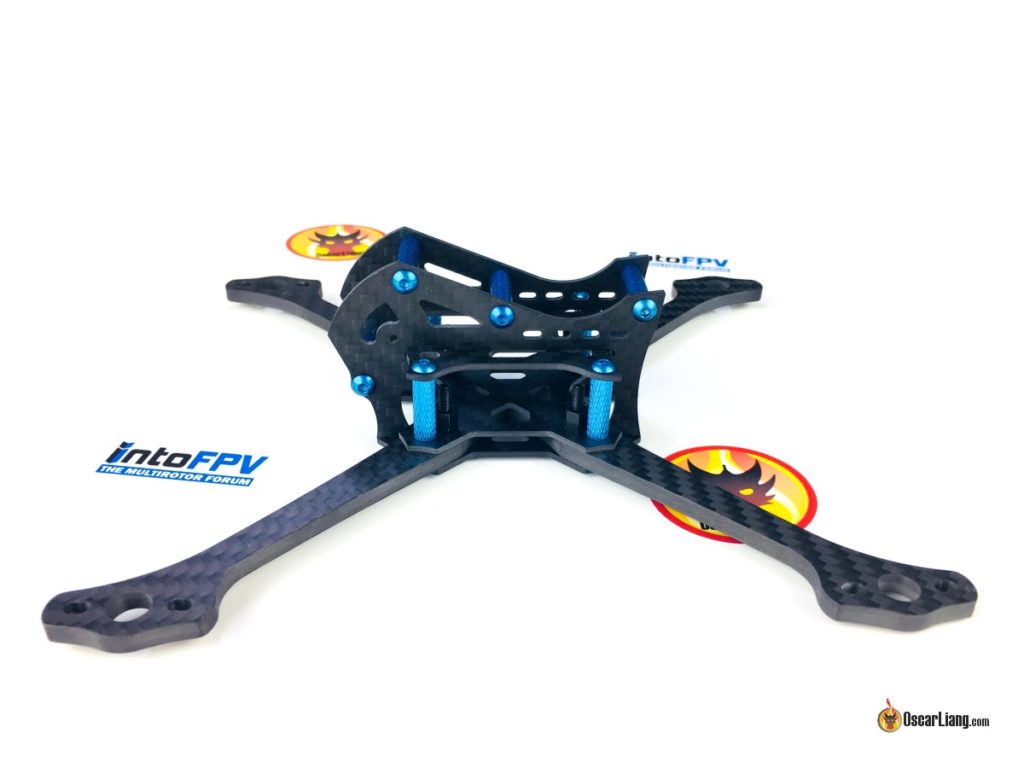 I think DemonRC was being generous and sent me more spare parts than a standard frame kit :) All the parts are separated and well packaged. 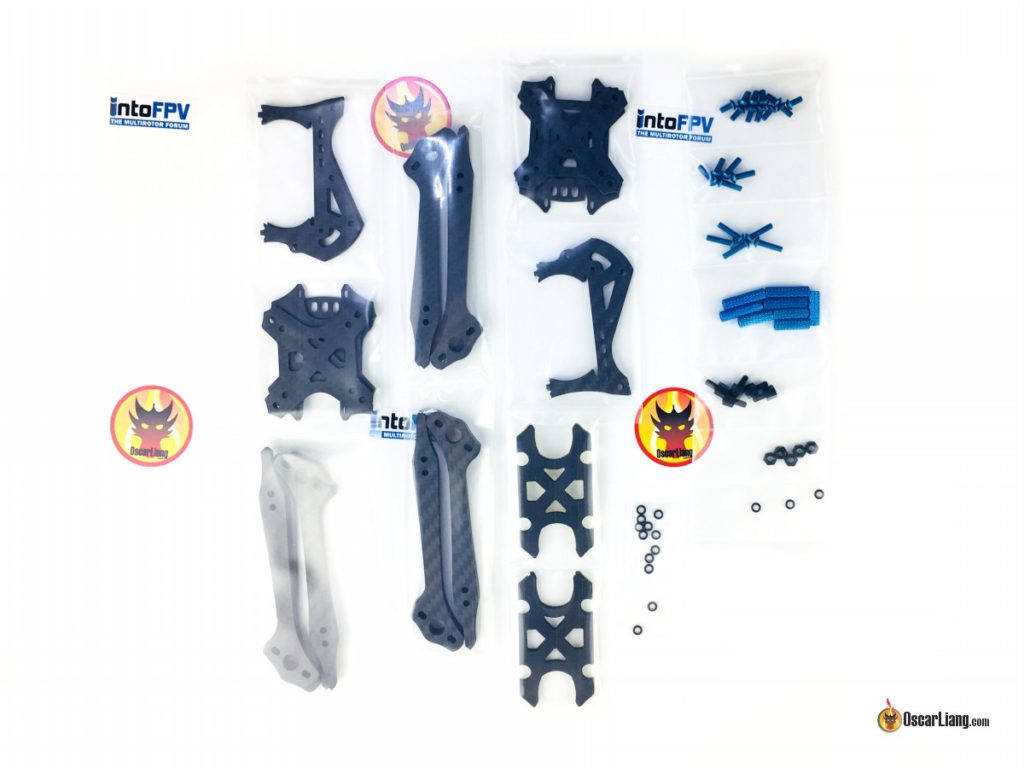 The arms are 4mm thick, with the motor mount simplified to have only 2 holes to keep the weight to a bare minimum. Bottom and top plates are 1.5mm thick.

The carbon edges are not chamfered… But i guess it won’t make sense to invest in chamfering all the edges while you might have to replace broken arms frequently, because things break a lot easier on a skinny frame like this.

Anyway, if you fancy chamfered edges here is how you can do it yourself. 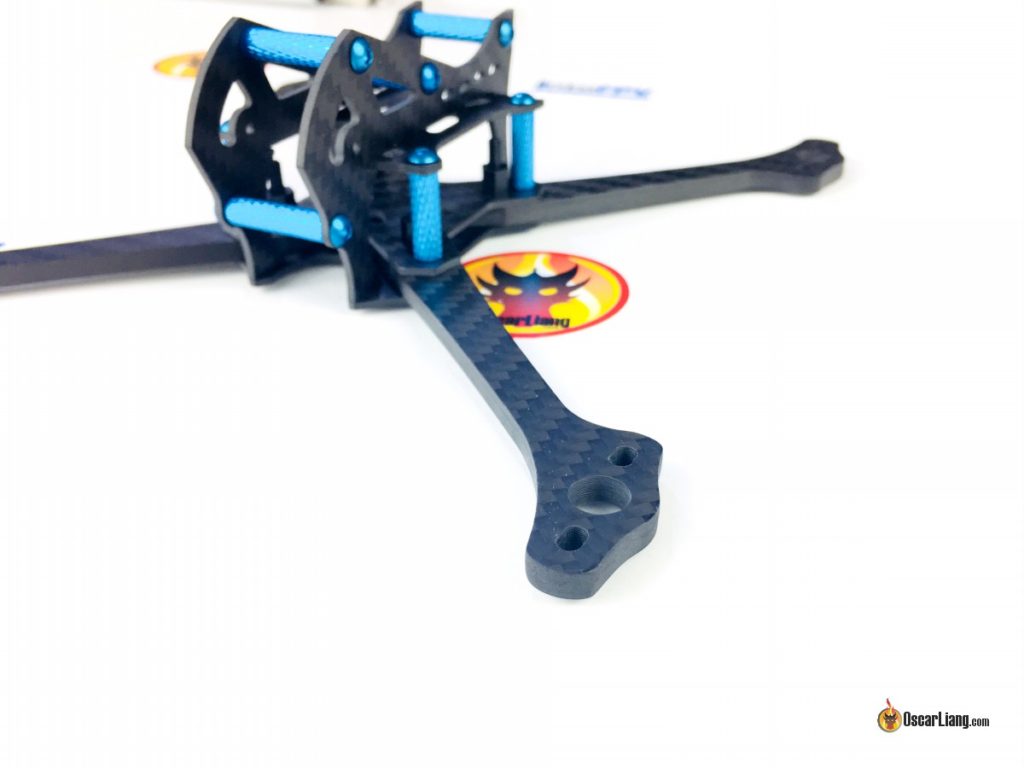 The frame layout is a symmetrical “pure X” with 195mm motor to motor distance. 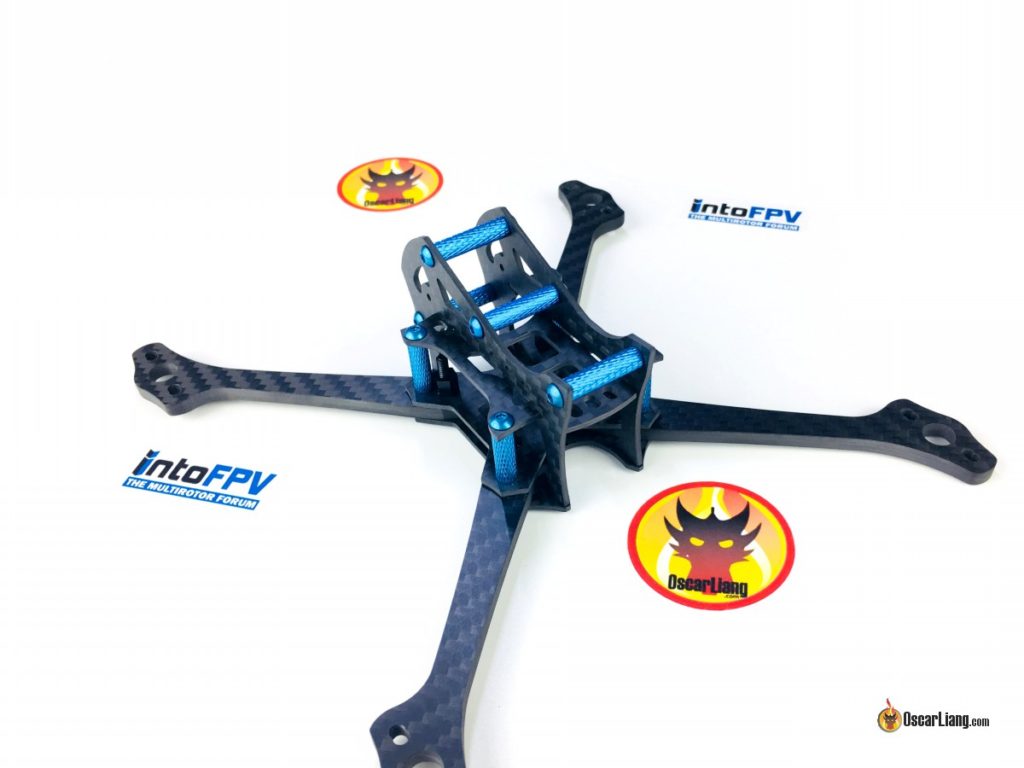 Another great feature is the support for the GoPro session HD camera.

The Fury frame comes with foam pad for mounting your battery under the frame, so it won’t get scratched or punctured by the screw heads. This is an excellent addition, but I wish it was a “sticky rubber” pad which can hold the battery more tightly. 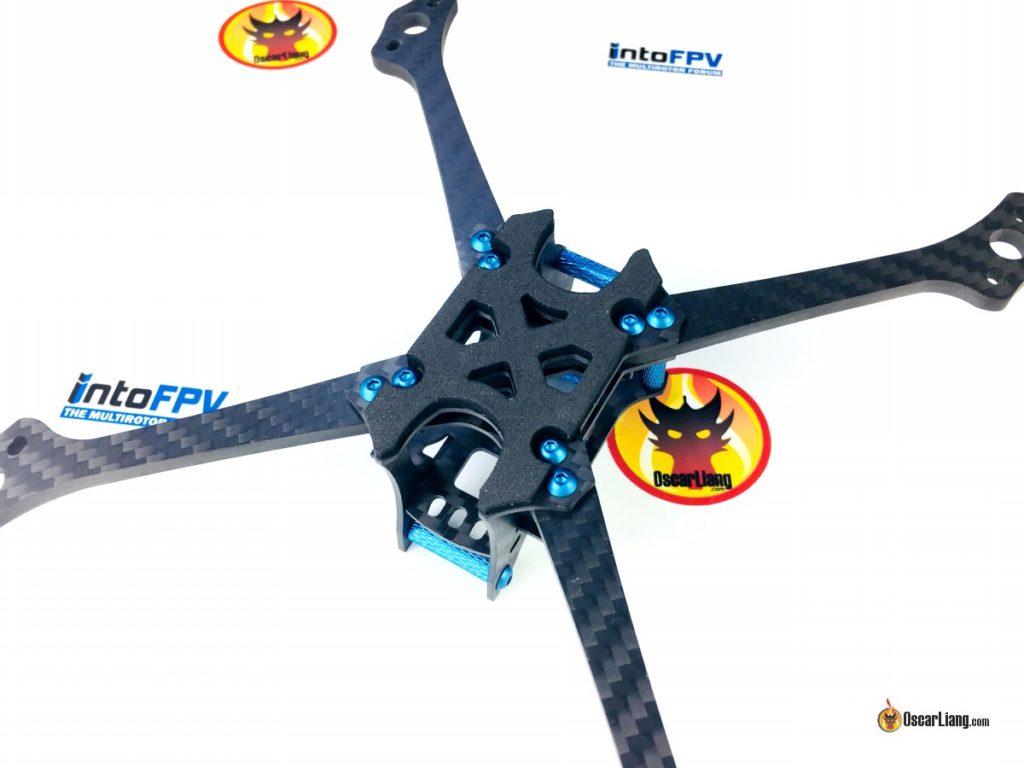 The more I look at the Fury Lite, the more I like it, it’s light as a feather and the design is just beautiful and unique. 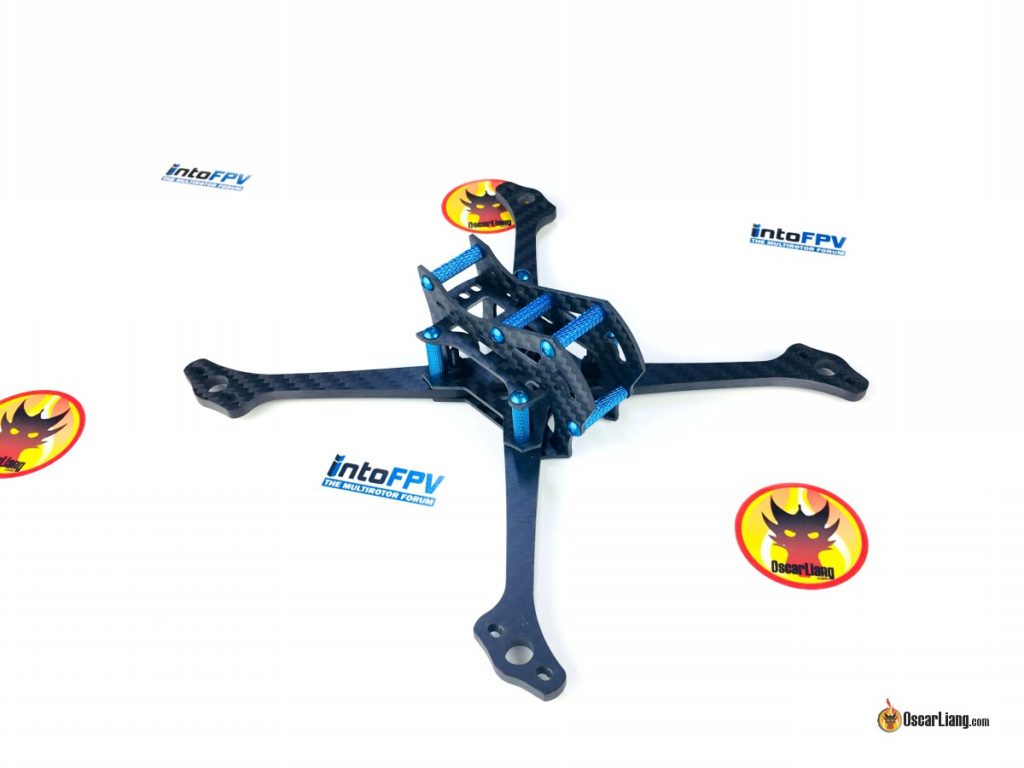 However you only truly get to know the frame and realize the downsides after building and using it more. 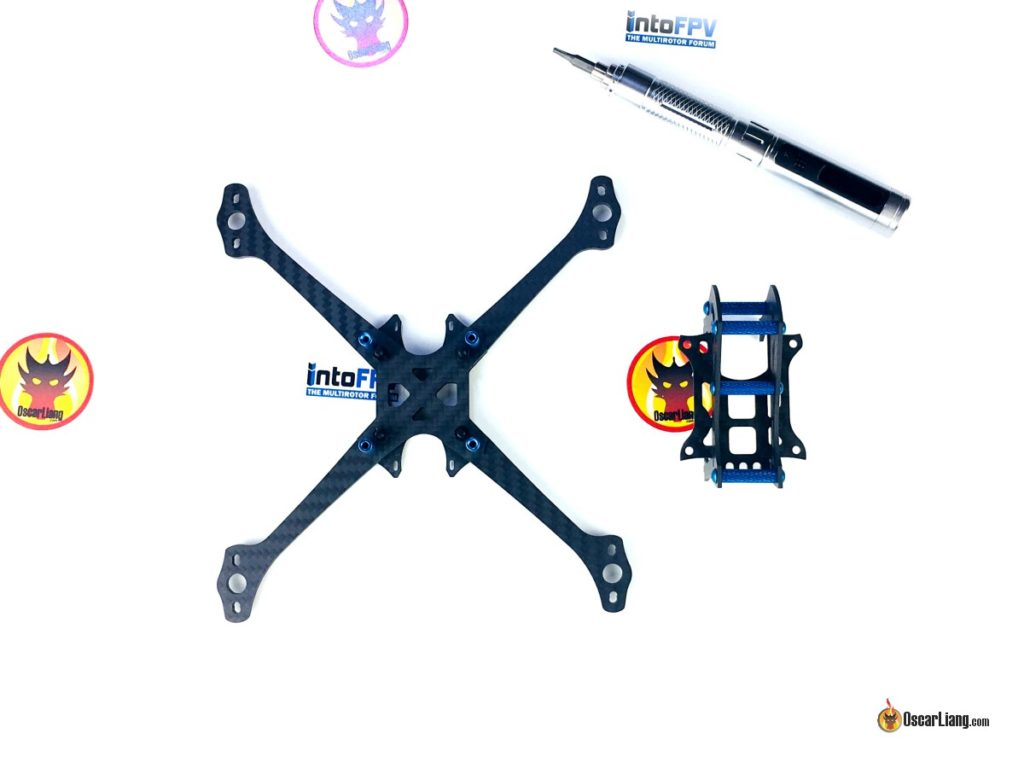 There is definitely a trade off between weight and frame size. I love the fact that this thing is only 50g, but it also means the frame is so compact, it won’t be compatible with certain hardware, for example:

It was really hard to find info about the Fury frame on the internet, build logs and photos are non-existent. It would be nice if there are more guidance on how to build it, and recommendation of components that would work well with the frame (since there are so many restrictions).

The first challenge I had was fitting the Holybro 30A 4in1 ESC, somehow it’s just too big for the Fury to fit. 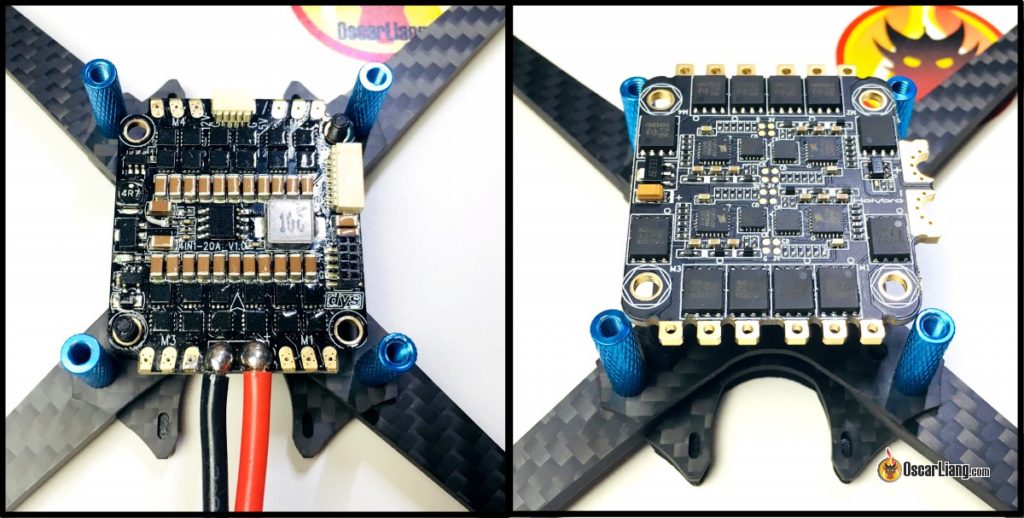 Luckily I managed to remove the corners of the ESC to get it fit perfectly.

The next issue I encountered was the stack height limitation. It’s impossible to fit the stack in the frame with the original standoffs. So I had to get creative and found a way to fit this stack using some different hardware.

I will show you how I did it in the build log below :) 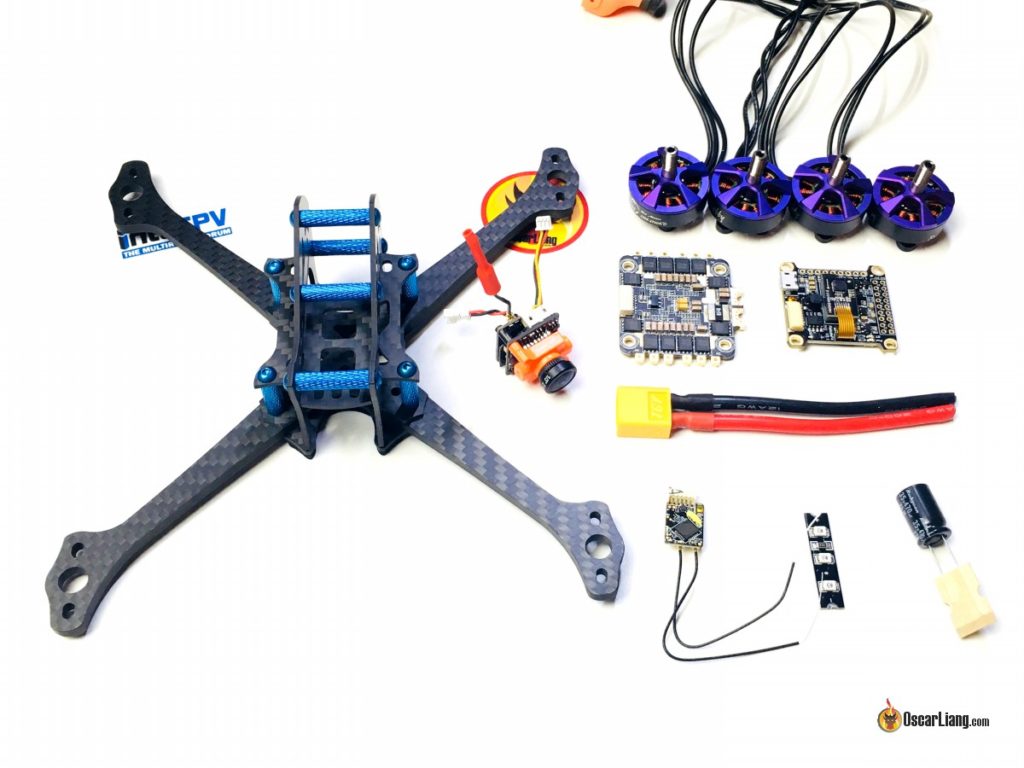 Ignore the XT60 pigtail and LED – I didn’t use them in the end to save weight :)

The Kakute F4 isn’t the best choice for this frame, because the soft-mounted gyro and ribbon cable require extra room otherwise they can come in contact with the frame. It’s possible to do but it’s just more challenging :)

In order to mount the Kakute F4 and 4in1 ESC stack in this frame, you will need to get some 14mm screws to replace the original 10mm for the FC stack. You will also need to make the 5mm standoffs shorter, I used sand-paper to sand them down them to 4mm.

I used nylon nuts as spacer between the frame and ESC. But later on I realized that might be a bad idea, because if you need to replace an arm, that screw might not come out that easily because of the nylon nut. I should really have used a non-threaded spacer instead. 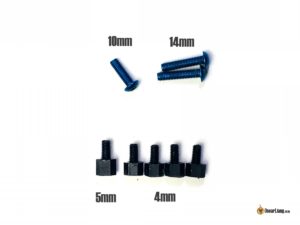 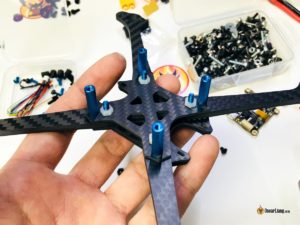 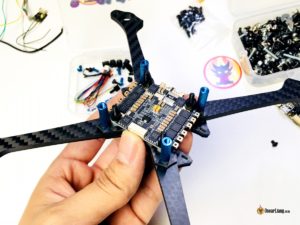 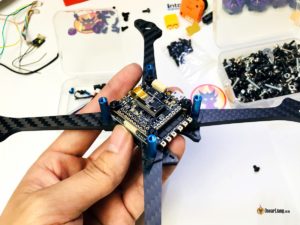 The stack is perfect, we have more than enough clearance between the Gyro, ribbon cable and the frame.

Note that the flight controller and the ESC’s are both rotated 180 degree, so that the Gyro ribbon cable doesn’t get in the way of the FPV camera. I had to add a 180 degree offset to yaw axis in Betaflight, and remap motor outputs using resource remapping. 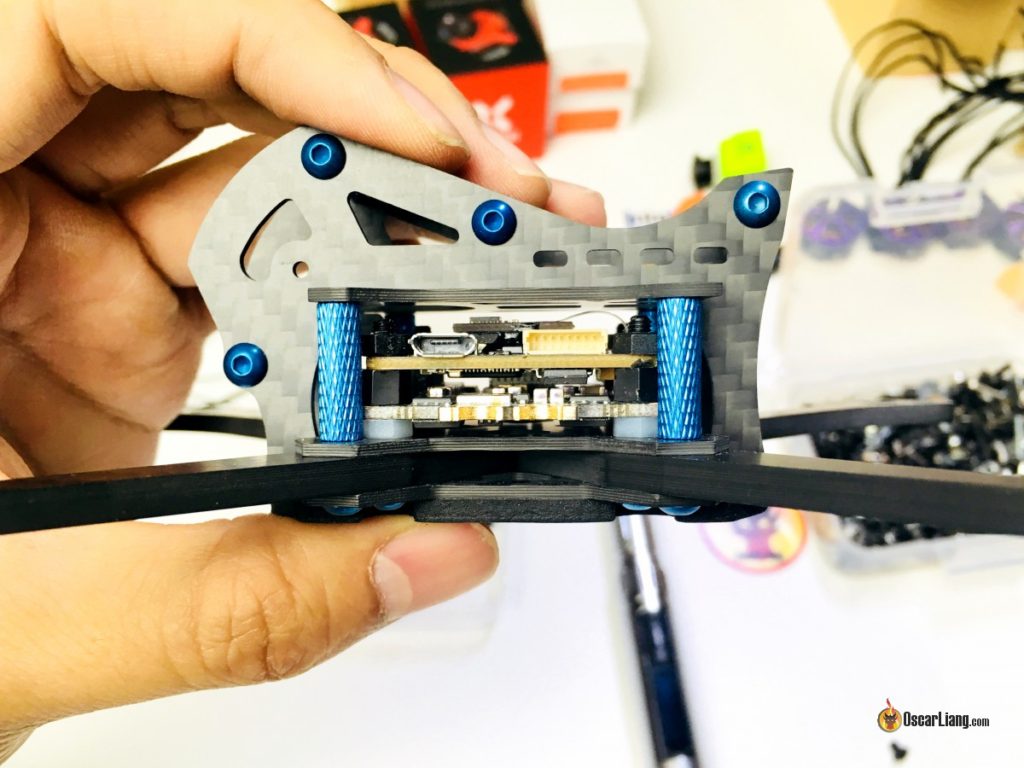 After making sure the electronics are going to fit, I began building the frame! First off, mounting the motors. Because we are only using 2 screws for each motor, threadlocker glue is a must! Also put your battery strap on before installing the ESC.

Further Reading: Check out the tools I used to build my quads with.. 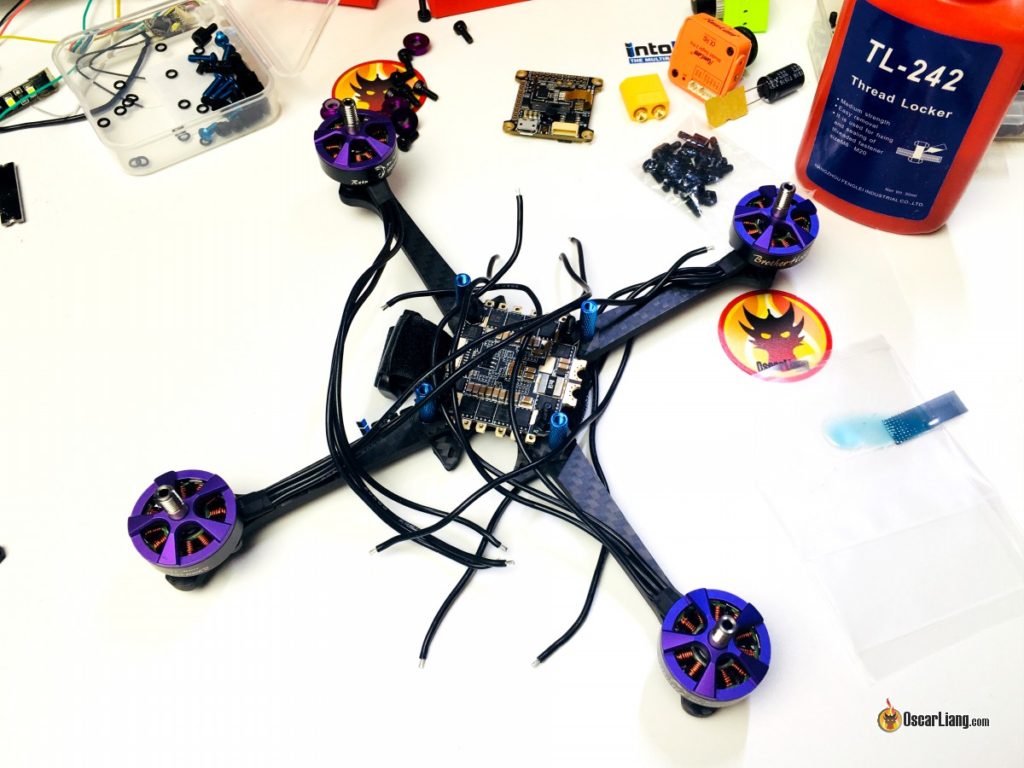 Soldering the motors to the ESC, and the XT60 connector and low ESR capacitor (470uF 35V in this case).

I don’t normally recommend soldering the XT60 connector straight on the PDB or FC, we should use some short wires in between which allows the wires to bend in crashes and won’t stress or damage the boards. But to save weight I decided to take the risk and direct solder them together. 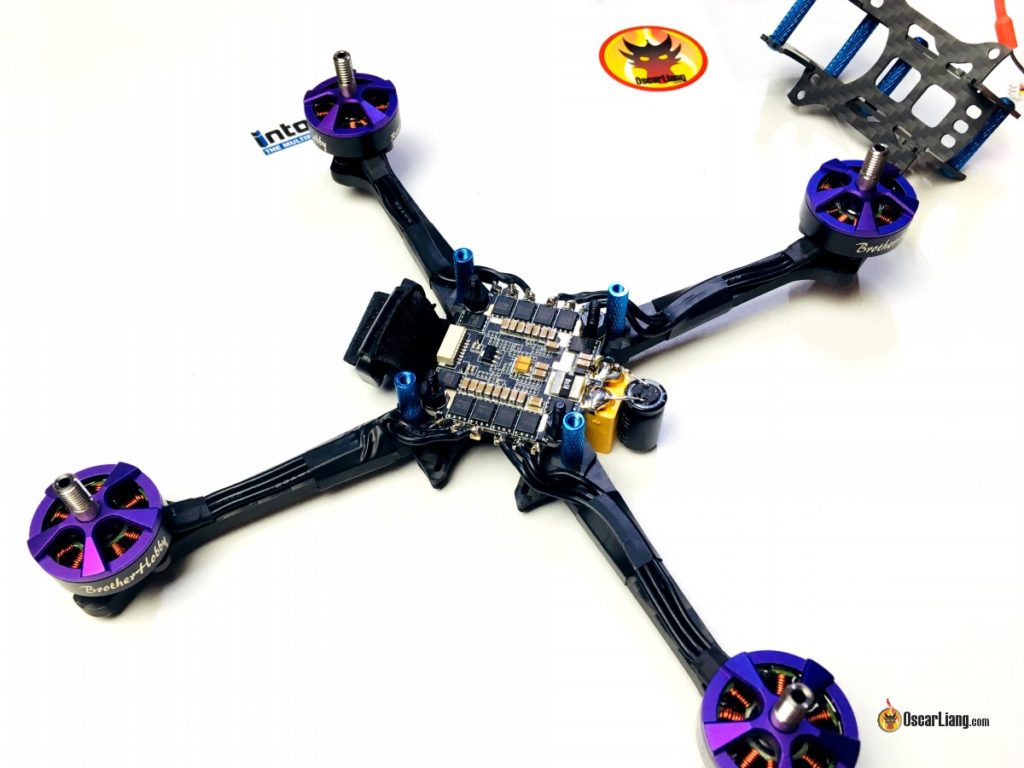 Soldering the rest of the electroincs: FC, RX, VTX and FPV camera, and we are done with soldering!

Further Reading: Have you checked out our beginner guide on soldering? 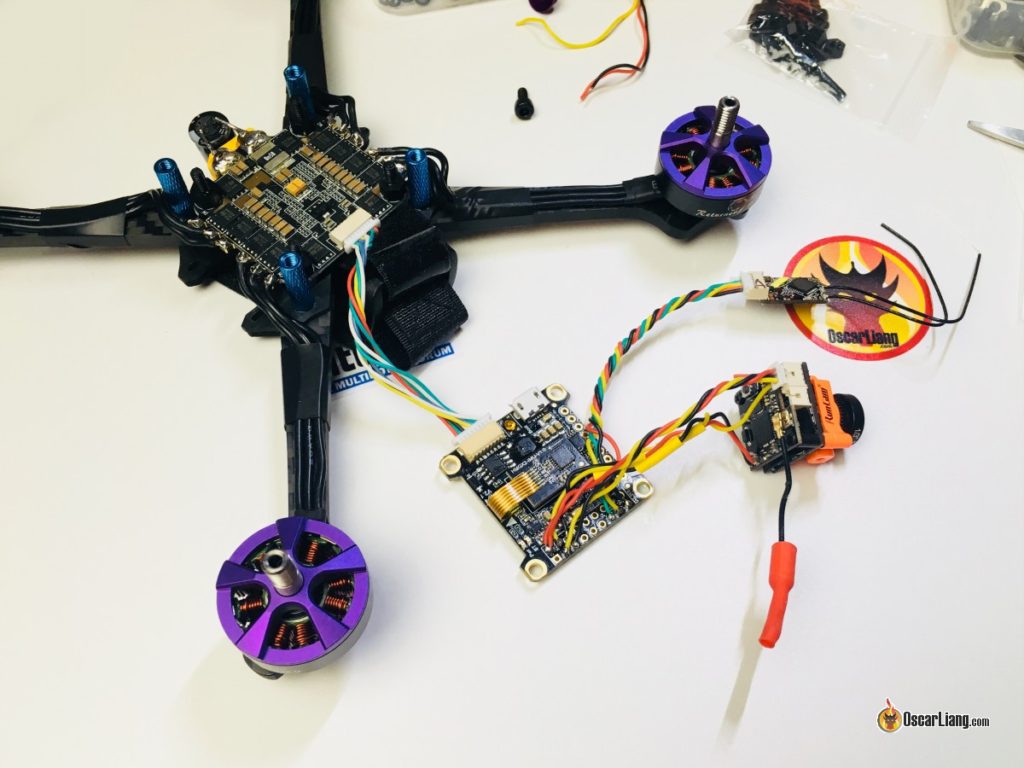 In order to mount the micro camera, you will need to use the rubber o-rings that come with the kit. The reason for that is because the frame body is 20mm wide, while the width of the camera is only 19mm. (I guess DemonRC couldn’t find any 19mm standoffs :) )

This seriously increases the difficult of building, especially repairing, because you have to take apart the whole camera cage first every time you want to remove the camera. 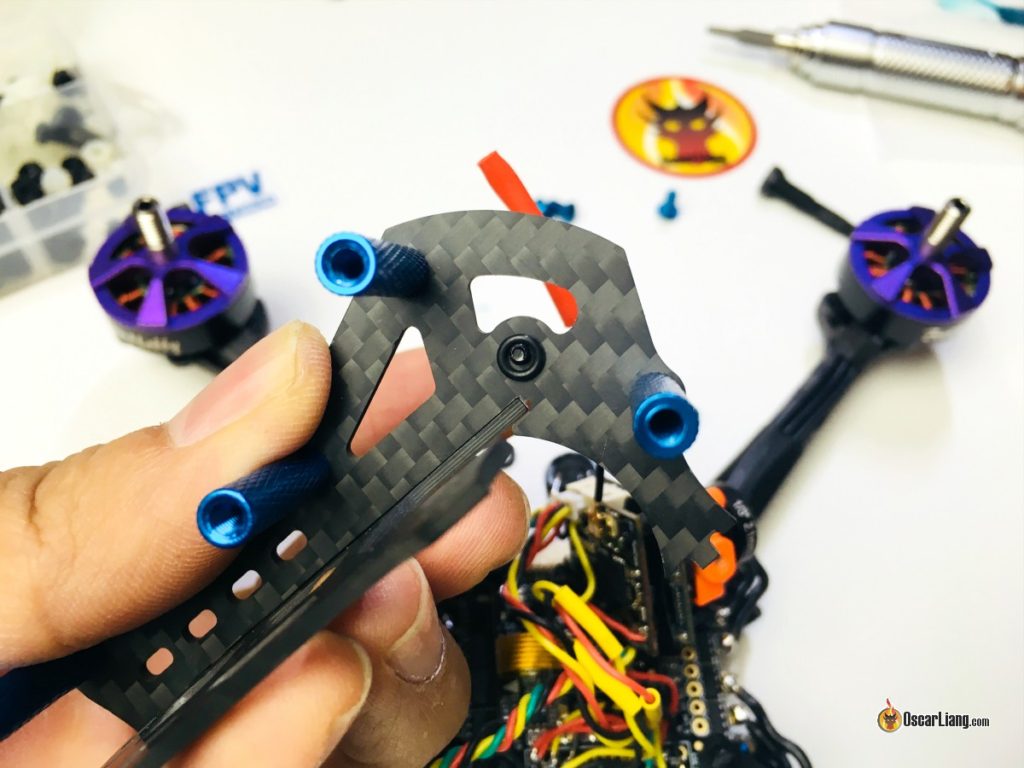 After mounting the camera, and installing the “cage”, I decided to mount the RX on the top plate. 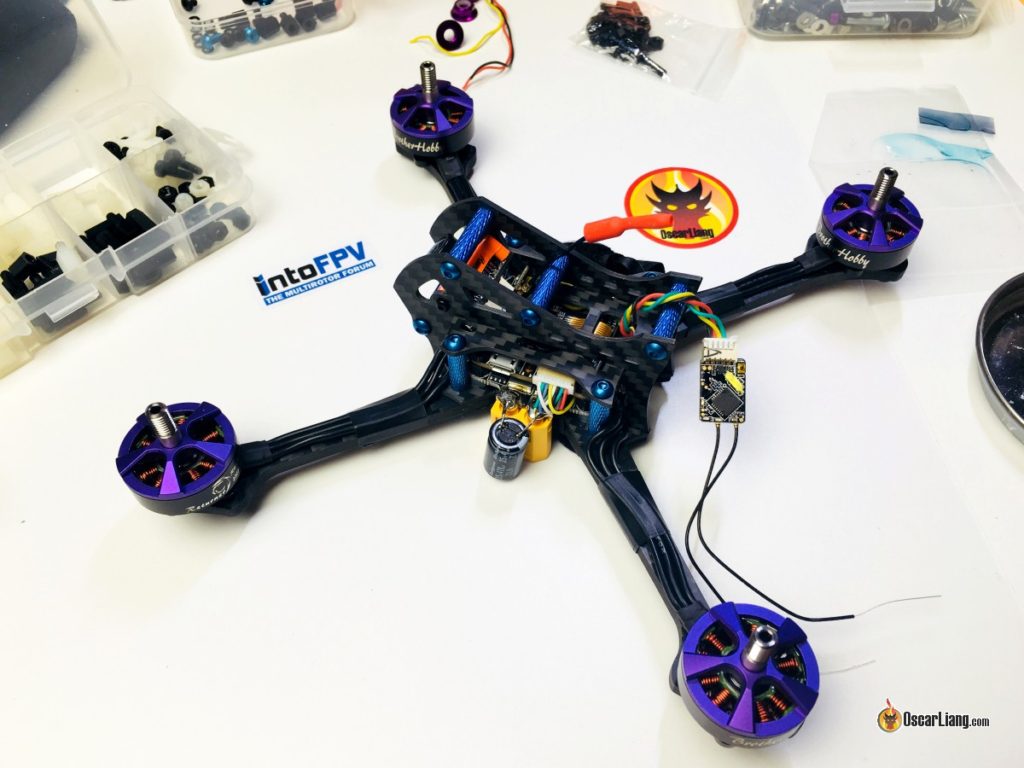 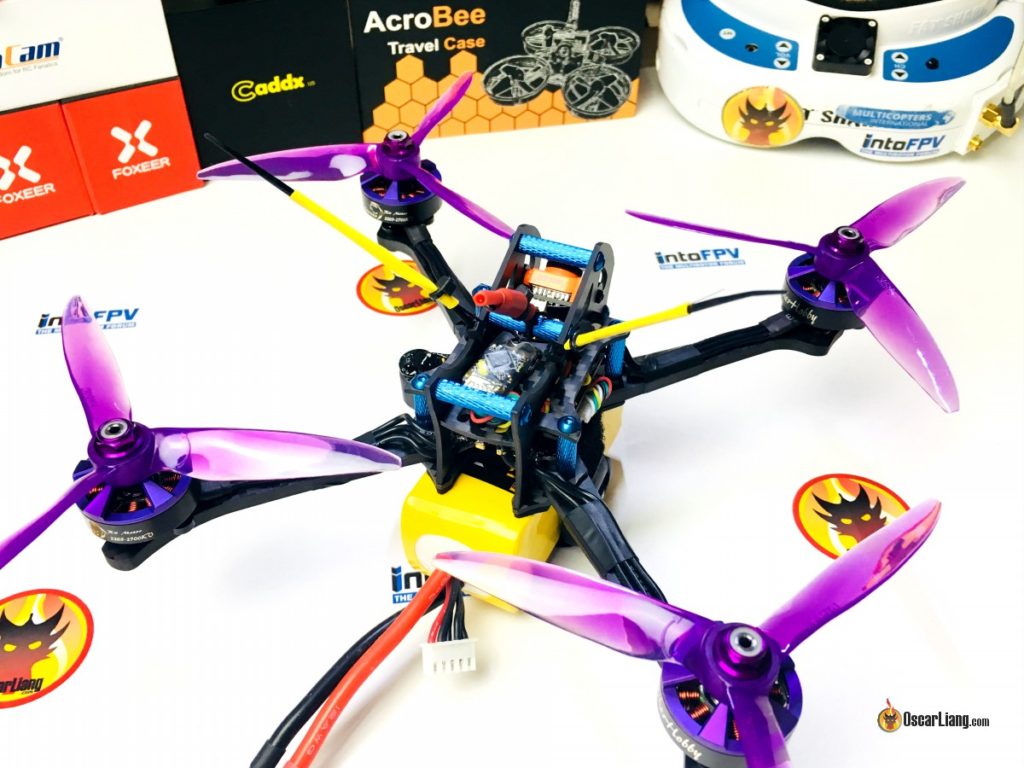 This is how I fixed the RX and VTX antennas with zip-ties and heatshrink tubes, works well every time! 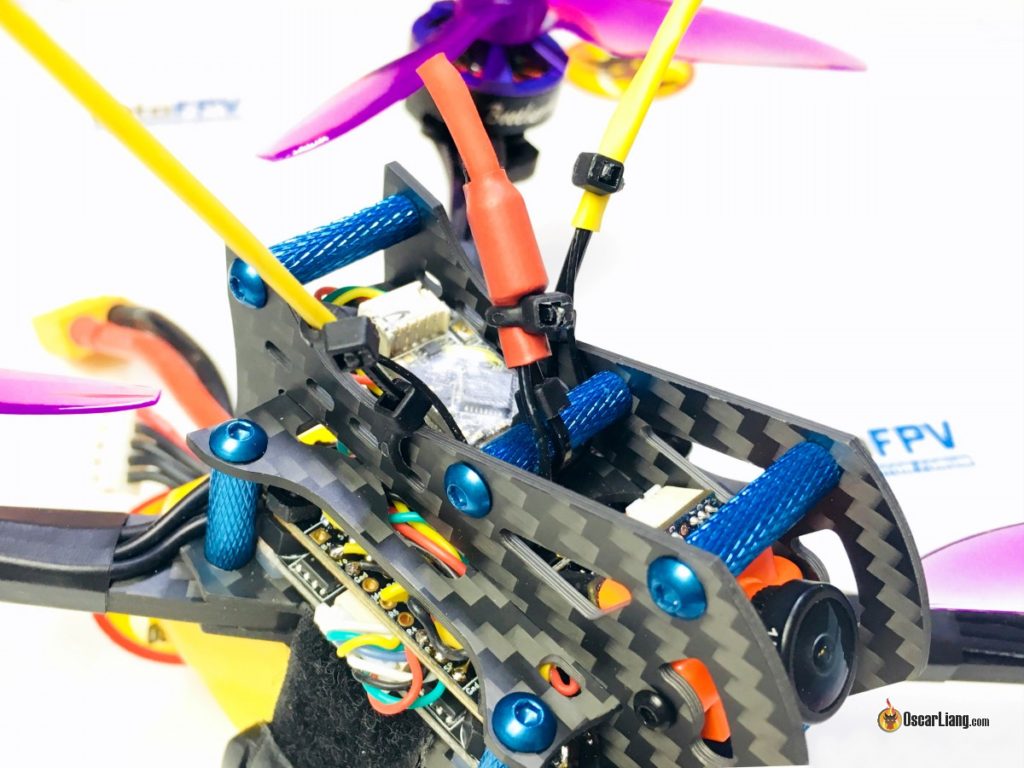 And finally I added some liquid tape on the XT60 solder joints and the leads of the cap to prevent accidental short circuits. 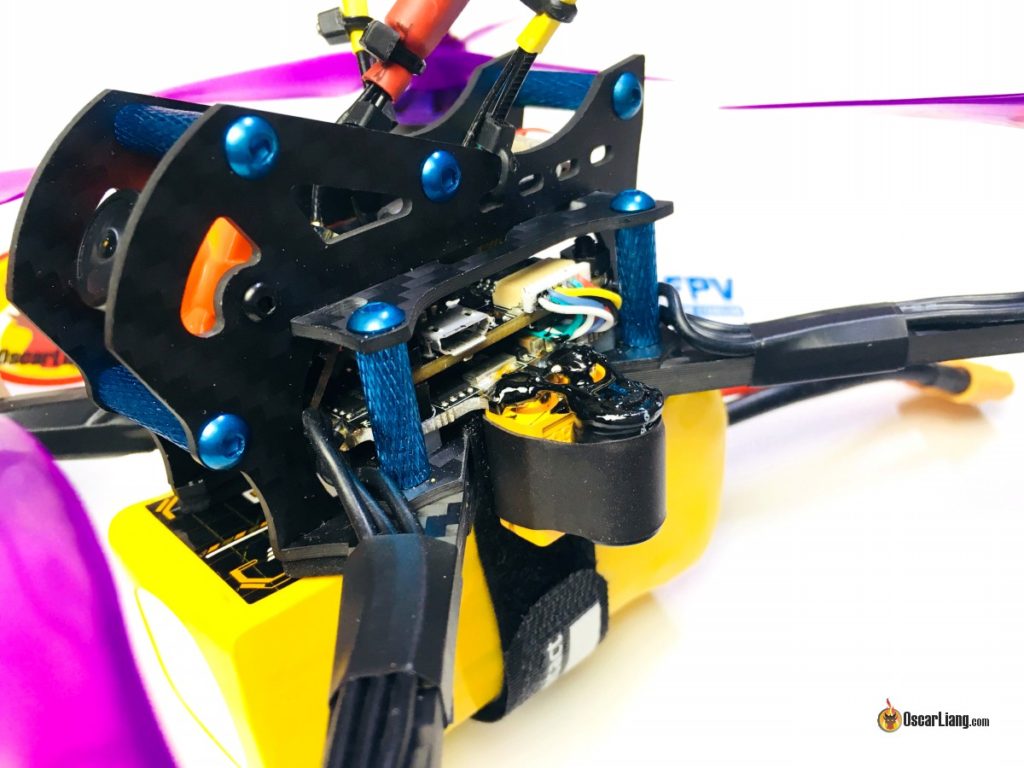 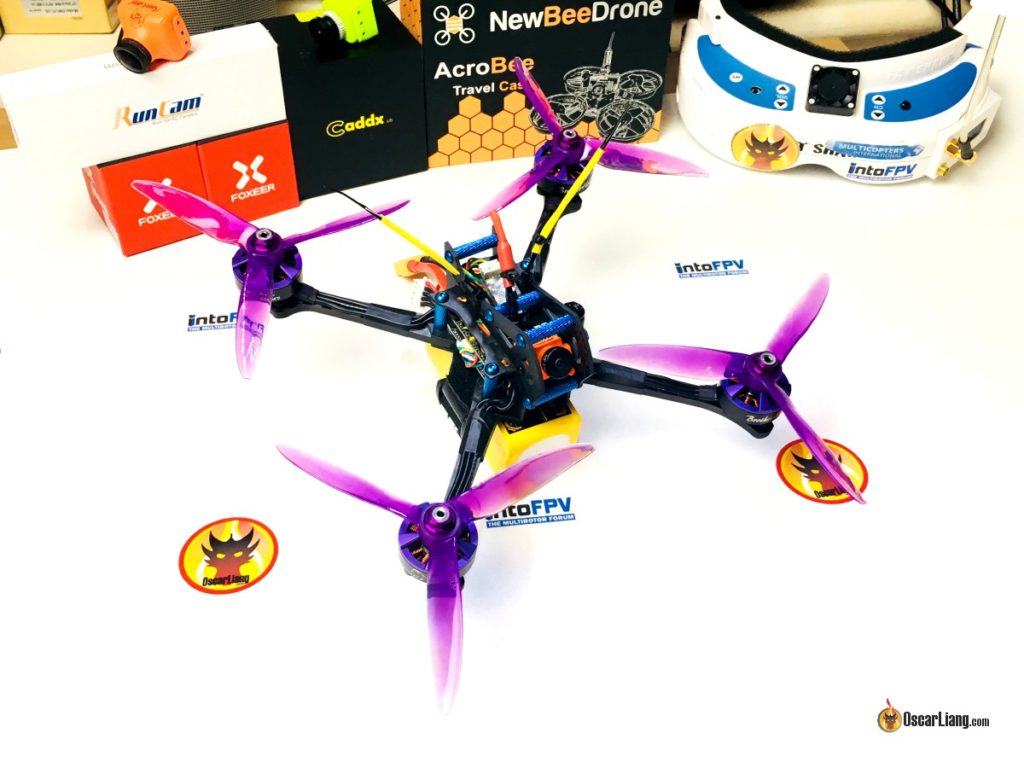 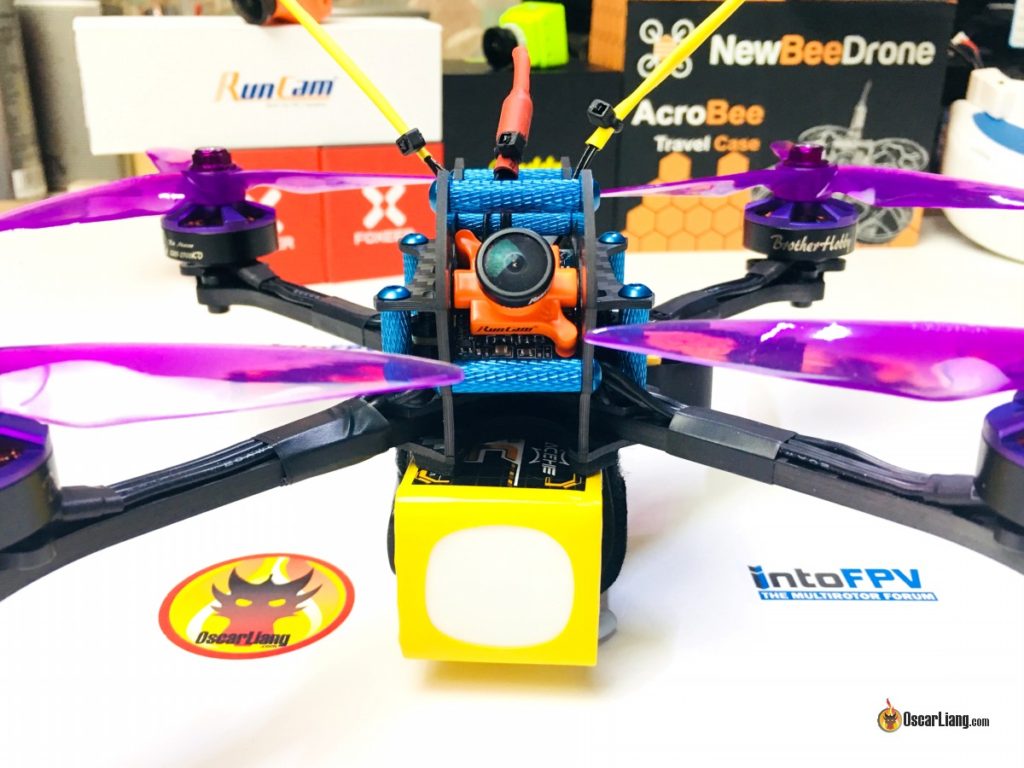 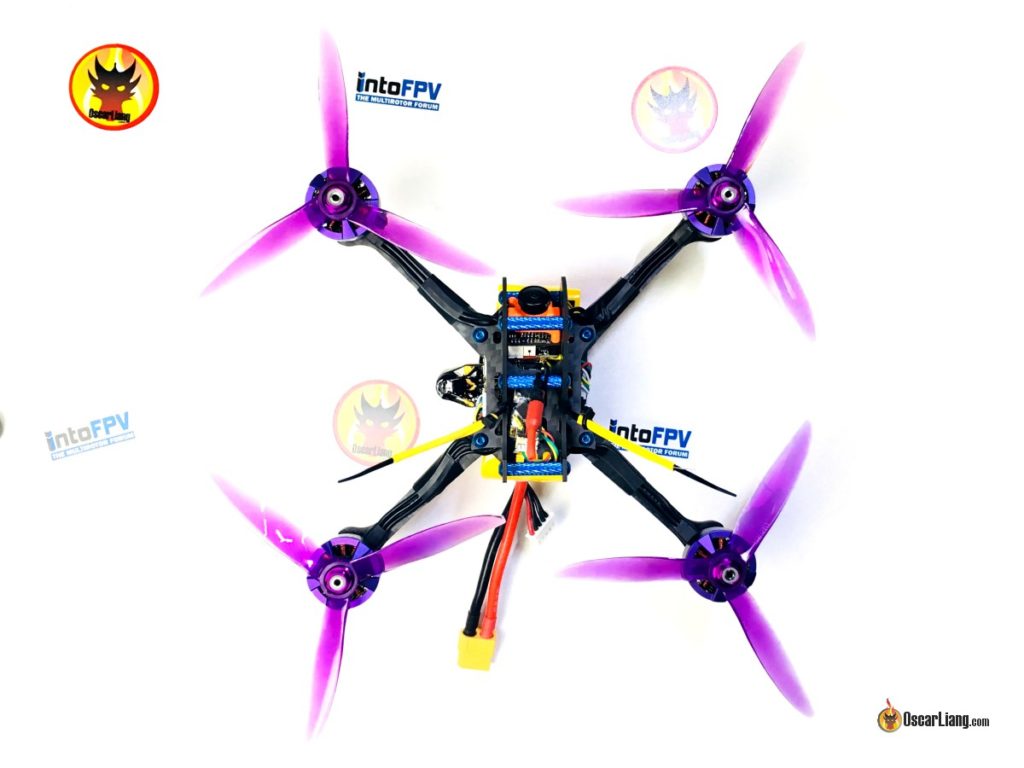 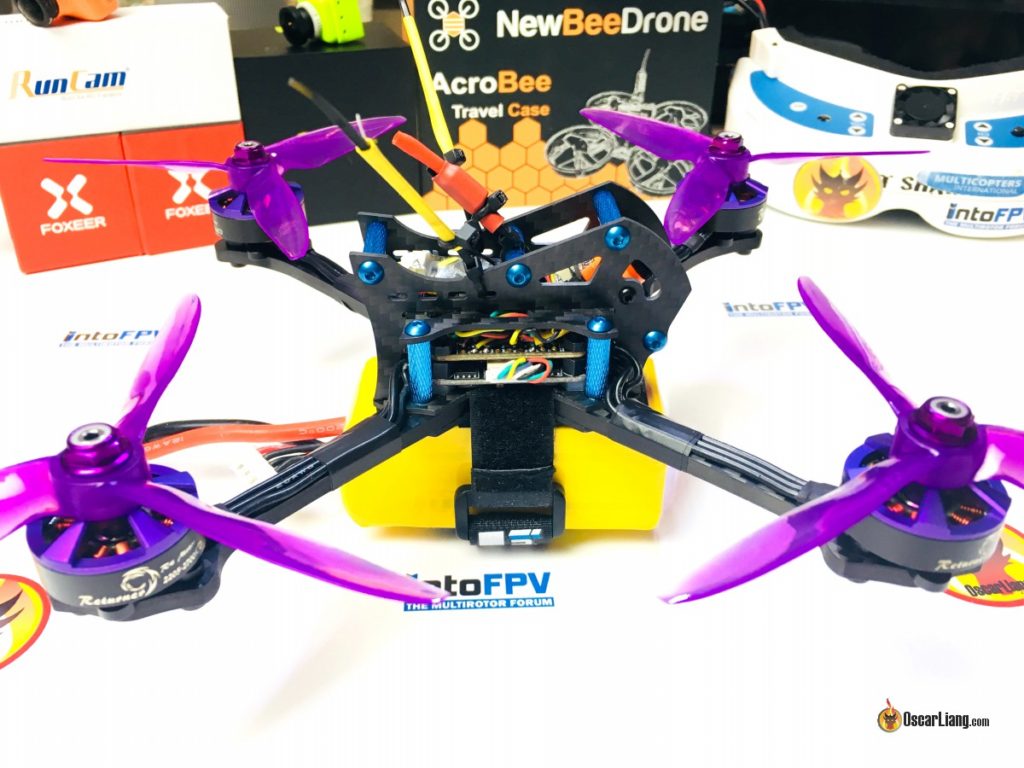 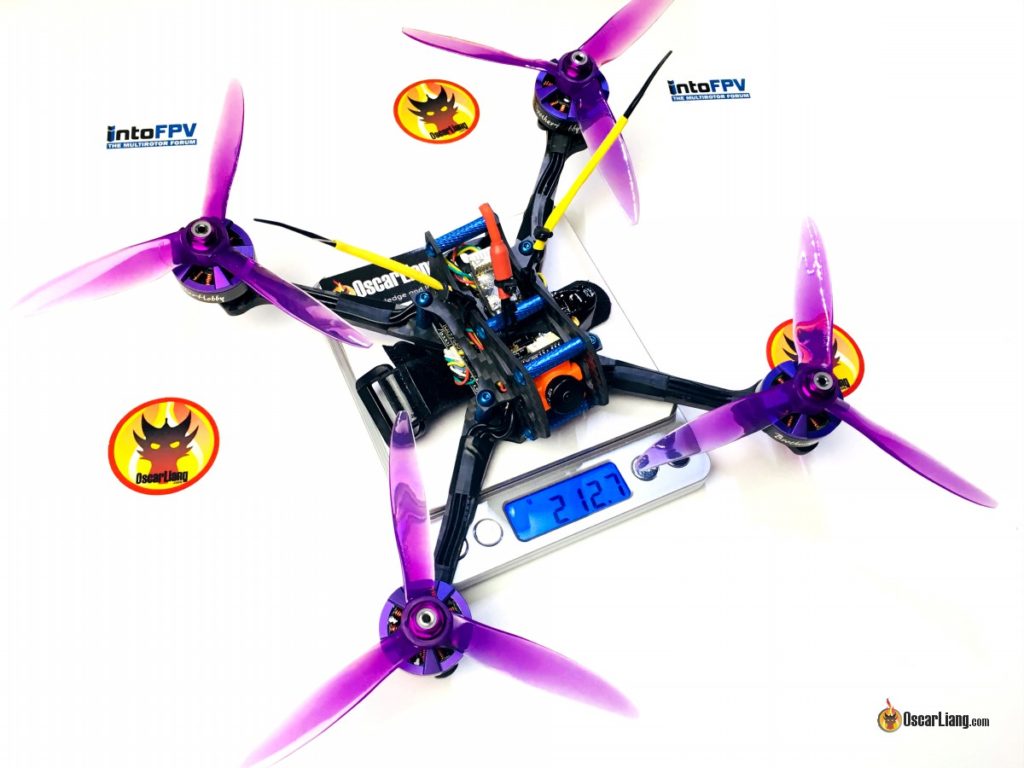 Conclusion – Is the Fury Lite For You?

If you are a hardcore racer, the Fury is worth considering for its extreme lightweight and awesome design. I am also really happy with the frame quality! The flight performance is just phenomenon, probably one of the best quad I have flown :)

But, it’s not for everyone.

if you are relatively new to mini quad flying, maybe you want to consider something easier to build and more resistant to crashes, such as the Martian II :D For me, the Fury 5X Lite isn’t the hardest frame to build , but it was certainly a challenge getting everything to fit.

The first impression I get flying this quad is how floaty it is! A little bit of increase in throttle the quad just shoots up in the air, and it seems I can stay inverted for longer. It takes a while to get used to the high responsiveness and power.

After about 10 flights, I broken an arm, the top top, and one of the aluminium on the standoff just stripped. 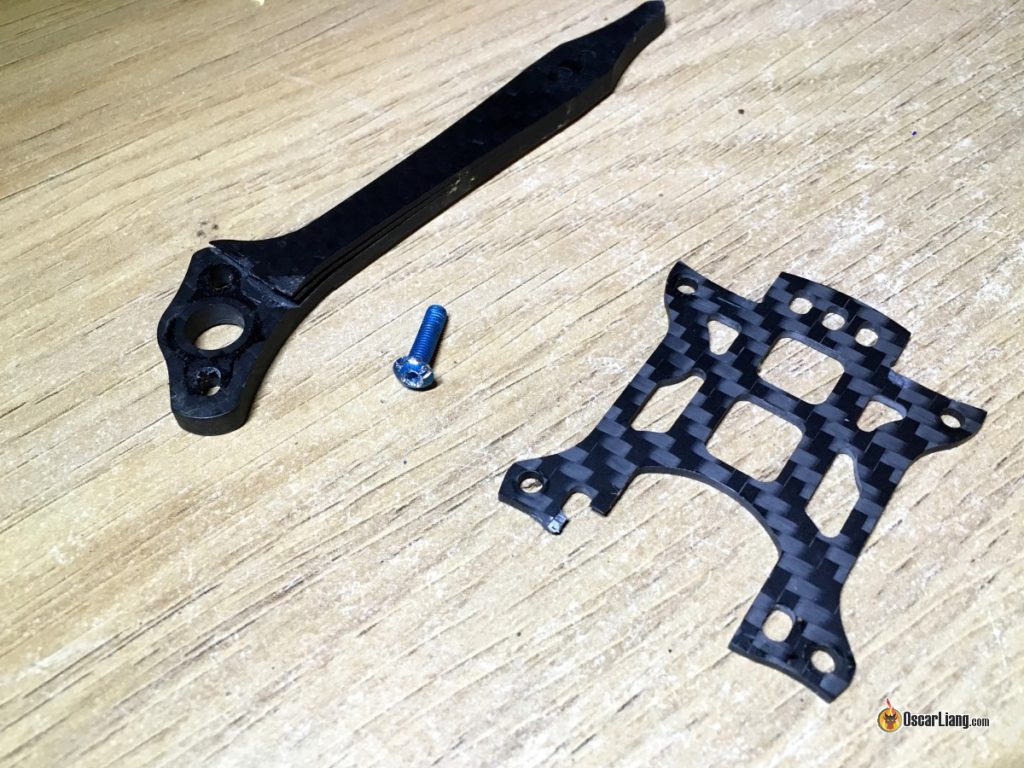 What was the total cost building this?

Is there any other fc + 4 in 1 esc stack that you would recommend for a similar build with this frame? I was thinking of getting dys f30a 4 in 1 + dys fc.

Oh, and what about a different vtx. Will there be any place for unify pro race and pagoda? Or should I go with micro vtx and linear?

Lots of good 4in1 and FC options, such as the Aikon TK32 4in1… FC wise, the Matek CTR AIO is also an excellent board.
I haven’t tried the latest DYS combo so cannot comment on that.

I am sure you can use the Unify Pro VTX, but I probably wouldn’t recommend using the pagoda it’s too heavy and easy to break :) The Lumenier UFL AXII is a good choice if you’ve got the cash :)

I have the same motors on the way going into a similar build, but not nearly as light. I went for a Realacc Furious 220mm frame, which is nearly twice the weight of the Fury 5X Life, but cheaper and hopefully a little stronger. I’m using 40A 4 in 1 ESC for some 5S fun so I won’t be far behind you ?

I look forward to your flight footage.

I finally had the chance to test fly her yesterday, oh boy it was such a blast! so fast and responsive.. now all other quads I have feel like a tank now :) I will upload some footage in a day or two :)