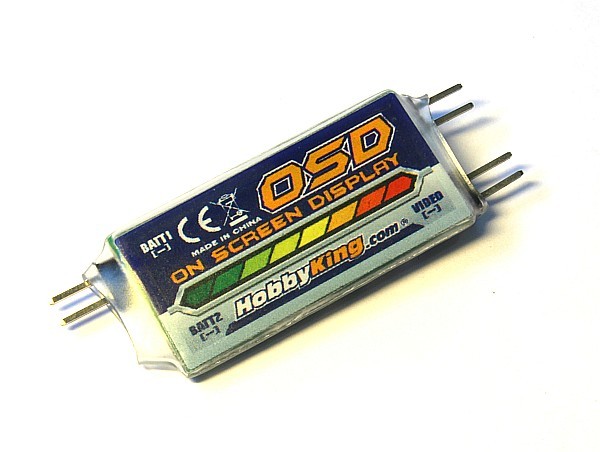 The Hobbyking E-OSD is a simple yet useful OSD to have. For my mini quad I don’t really need anything fancy like GPS or real time current, all I need is voltage level. However we can also read the RSSI level using the osd since it has two voltage inputs (Bat inputs). In this post I will describe how I hook up the E-OSD RSSI with my Frsky D8RXP receiver.

Beware, the RSSI output is not a continuous voltage, but pulsed PWM signal. To use it on the e-OSD, we need a low pass filter, which consists of a resistor and a capacitor, just choose between 10-22k resistor and 1-5uF capacitor should be fine. Connection is shown below.

When hook up everything, battery, video transmitter, camera, and the radio receiver that is able to output RSSI value, you will have these connections. 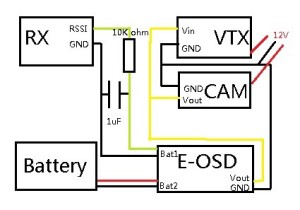 To make things easier, I made a very simple low pass filter cable with a spare servo lead. 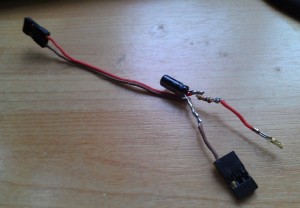 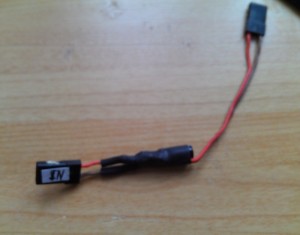 To check this in the house (i am lazy to go out), I turned on the Range Test on my transmitter module (available on the Frsky DJT). It basically reduce the transmission power to 1/30, so the signal strength is reduced and range can be determine much easier, without flying the model or walking the model to the max range (which could be 1.5KM!)

The range of the RSSI value is between 3.7V to 0.2V (For me), 3.7 being perfect signal. And you should have something like this (sorry I don’t have a DVR to take picture of my monitor, so I found a picture from google image as an example)

To use percentage instead of voltage to represent RSSI, check out how to flash E-OSD with custom firmware. 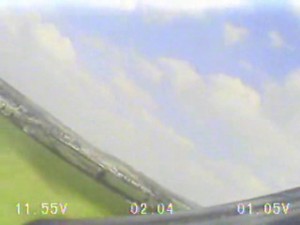 I followed this instructions on the Frsky Manual, and it works great.

A lot of people claimed they have been using 4S battery on this OSD, so I gave it a try, and SMOKE! The E-OSD is now dead.

Although the LED is led up when I connect 5V to the microchip directly, it won’t power up when battery is connected to BAT2 (the power pin), so I think the voltage converter must have been fried and damaged.

It is rated for 2S to 3S, so it’s not under warranty. If you really need to run 4S on the OSD, get the Super Simple Mini OSD. I heard it’s not as accurate when reading voltage as the e-osd, and it’s not programmable, but at least it’s rated correctly for 4S.

I don’t know much abour Arduino, but have flashed a few arduino products with the USBASP device. Would that work if I made a harness to connect the same pins?

Hi Oscar, this is really great info for me! but i have still some question about if it can work on my setup to view the batt voltage & RSSI from my vtx. I have a KK2.1.5 which cant connect any OSD, and my Rx is D6DR ACCST from HK. I would like to know if this E-OSD work for my quad to read the radio signal (RSSI) and my batt voltage?
Thanks!

Hey Oscar, I just use an ORX 6 ch Rx in my mini quad, can I still get RSSI coming through? Cheers Jas

Hi Jason, no i don’t think that RX does RSSI…

Hi Oscar again,
Great tutorial.
After finding it and reading it I have ordered 2 eosd!!
I have also searched how other people modificate this osd.
Most people desolder one resirtor of the board to get more resolution from the rssi signal but you do not mention it.
Did not you find it neccesary?
And some people even change this resistor for a 6030 capacitor to get the filtering.
What,s your opinion about this?
Thks

I am not sure about this mod.
I fried my e-osd with 4S lipo the second day I implemented this mod, so didn’t work on this OSD any further :)
But I would recommend getting the minimOSD if your FC supports it, it’s more powerful and easier to get it working.

Hello Oscar.I read all this usefull stuff you provide in your blog.I wonder if you know e-osd can hook up with fy 21 ap fyetech.Baud rate is 19200.
Thanks in advance.

Hello there! I just wish to offer you a big thumbs up for your great info
you have got here on this post. I am returning to your blog
for more soon.