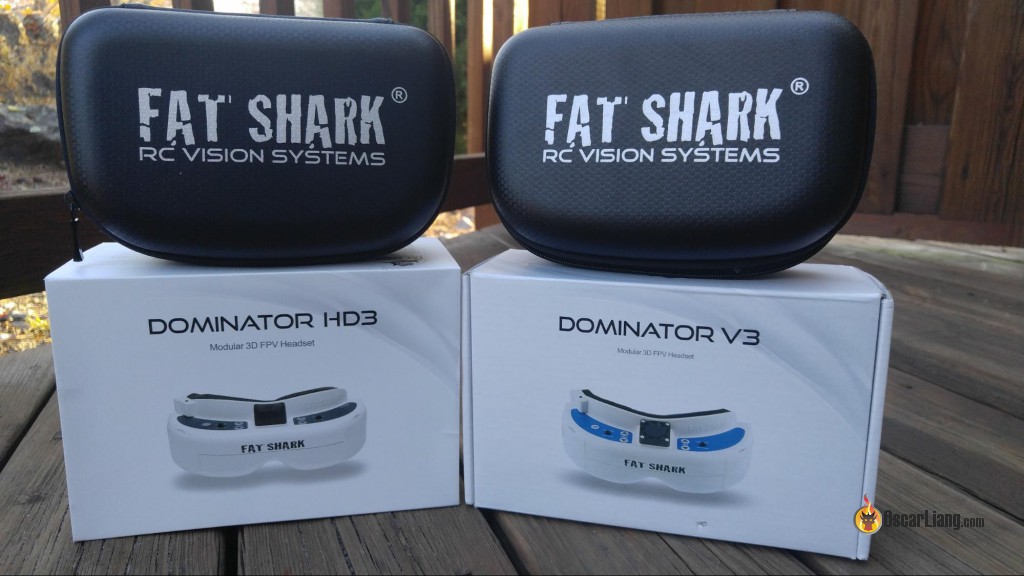 In this article we are comparing the Fatshark Dominator V3 with HD3 goggles in terms of spec and user experience.

Now that the Fatshark Dominator HD3 goggles are out, many people want to know whether or not they should upgrade. This holds especially true now that some FPV cameras has 16:9 aspect ratio such as the Runcam Eagle and the Connex Prosight HD.

Since both DomV3 and HDv3 have HD capabilities and are essentially designed towards the HD market, they’re perfect to compare.

The HD’3s have what initially seem to be small refinements. Once you compare in hand (and on face), you can notice that the refinements were beneficial. The screen is clearer, the fit is better, the electronics are slightly newer, the FOV is smaller (which made them clearer) and the goggles adjust automatically to 16:9 for HD. The screen itself was in the works for over a year by the FatShark team. If your HD2’s are still running strong, then you may find that it’s not beneficial to upgrade; however, the HD3’s are definitely worth it in my book. Of course, if you don’t have any HD2’s then you don’t have to worry about upgrading and leaving them behind.

For some more detail improvement check out this thread, and also my FPV Goggle shopping guide.

When only looking at the appearance of the goggles. the differences between HD3 and DomV3 are subtle. It’s not until you get to the specs and look INSIDE the goggles that you start to really see the difference. 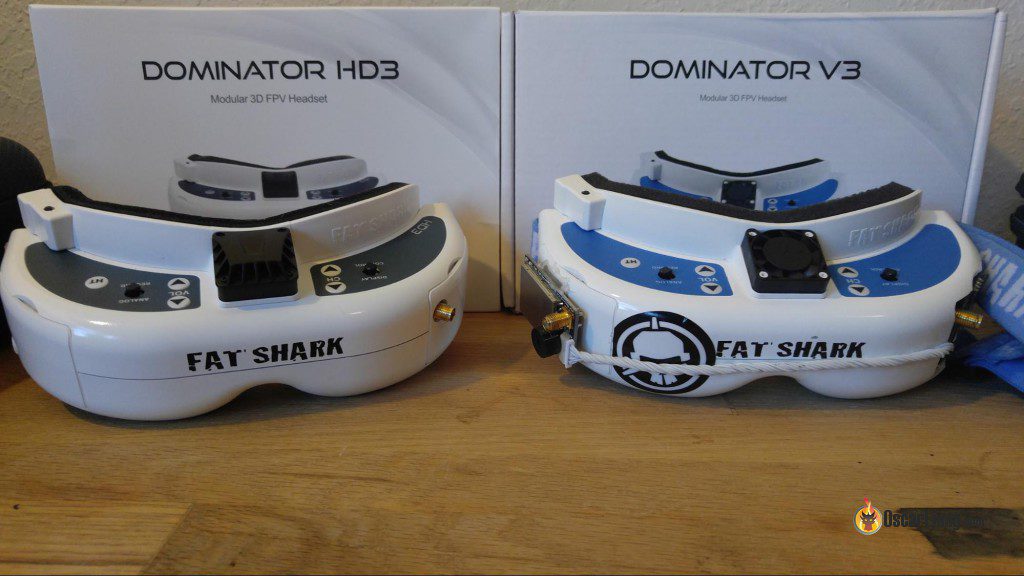 On the outside the only visual difference you can see is the color scheme (white/blue vs white/grey), the head strap color, the faceplate fan design, and the faceplate foam. 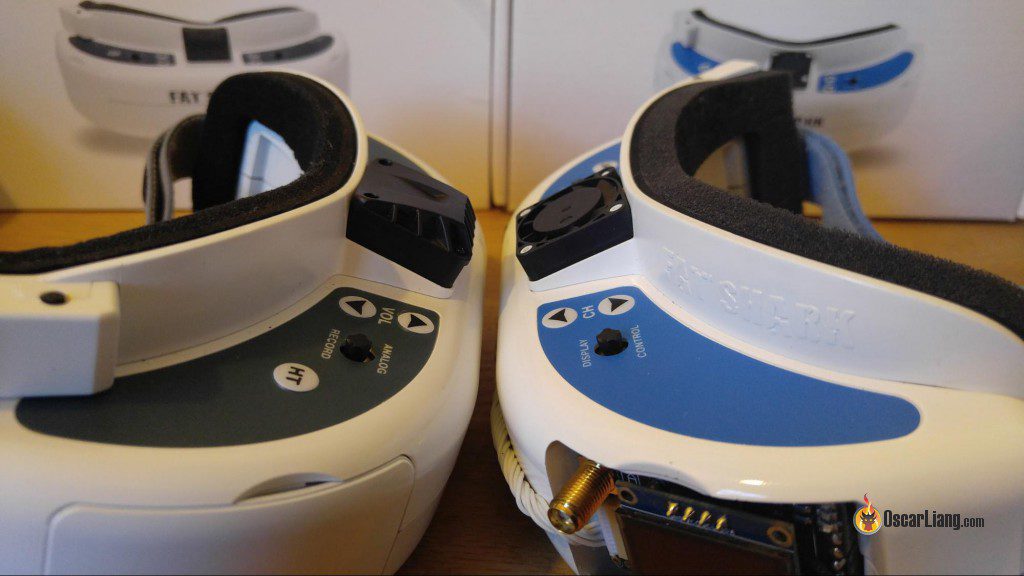 When you put the goggles on, the first thing you notice is the difference between the faceplate and the foam. You can purchase the new replaceable foam pads from Fatshark, so that should never be a deal breaker. 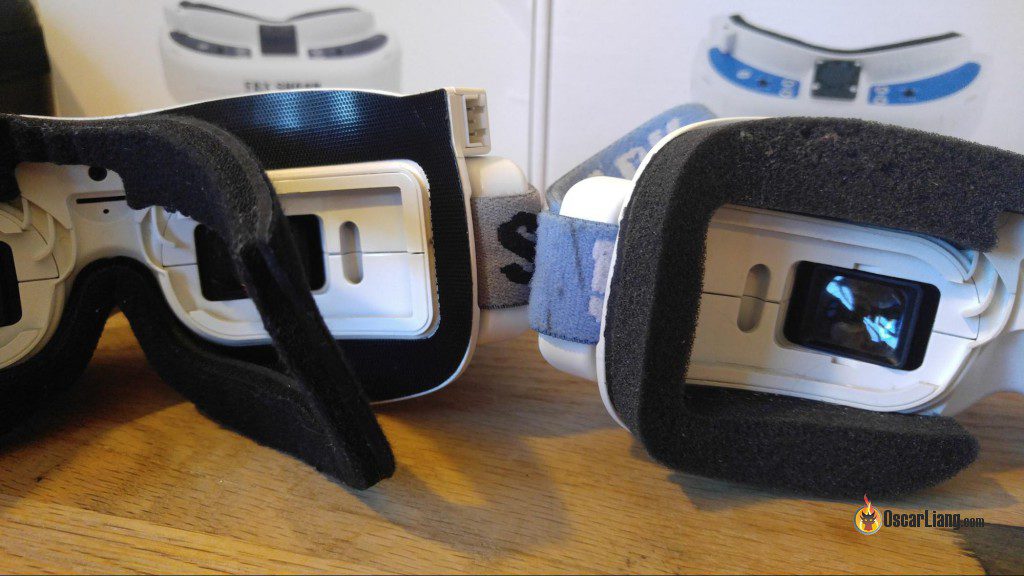 The new fan design on the HD3’s is definitely better than that of the Dom V3s. The Dom V3’s looks a bit cheap and doesn’t perform as well as the HD3’s. The fan is also quieter on the HD3s and pulls air and moisture out of your vision quicker.

The BIGGEST Difference is the most important!

Of course, the biggest difference is the screen. The Dom V3’s screen has a 16:9 resolution. It’s a static screen size designed for use with HD systems. The Dom V3’s have worked great for me when flying in Liftoff on the computer (in HD). Due to it’s natural 16:9 ratio, for analog video, the Runcam Eagle should be the perfect fit. A lot of people have been pleased with the video quality when using the Dom V3’s and the Eagle.

Unfortunately, the HD3’s aren’t capable of 16:9 in analog video. However, they are capable of 16:9 when viewing HD video. When using the HD3 goggles in HD on Liftoff, the difference is noticeable.The 16:9 on the HD3 goggles is still bigger than the 16:9 on the Dom V3’s. FatShark sent this image taken on their own testing machines of the screen size comparison in 16:9. 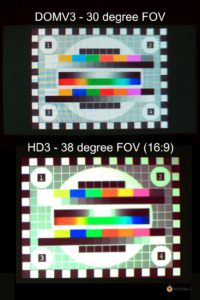 As you can see in the picture, the FOV for the HD3s in 16:9 is still bigger than the 16:9 screen of the DOM V3’s. This has really been the deal breaker for me. The screen on the HD3’s is a higher quality screen than the DOM V3s. This allows for a clearer and “crisper” view in the goggles. It’s also a bigger screen which really makes a difference up close. For me it’s been like the difference in watching a 32 inch TV in widescreen versus watching a 47 inch TV in HD Full Screen. Watching the 32 inch TV in widescreen is fine, until you watch the 47 inch TV, and then it’s hard to go back. 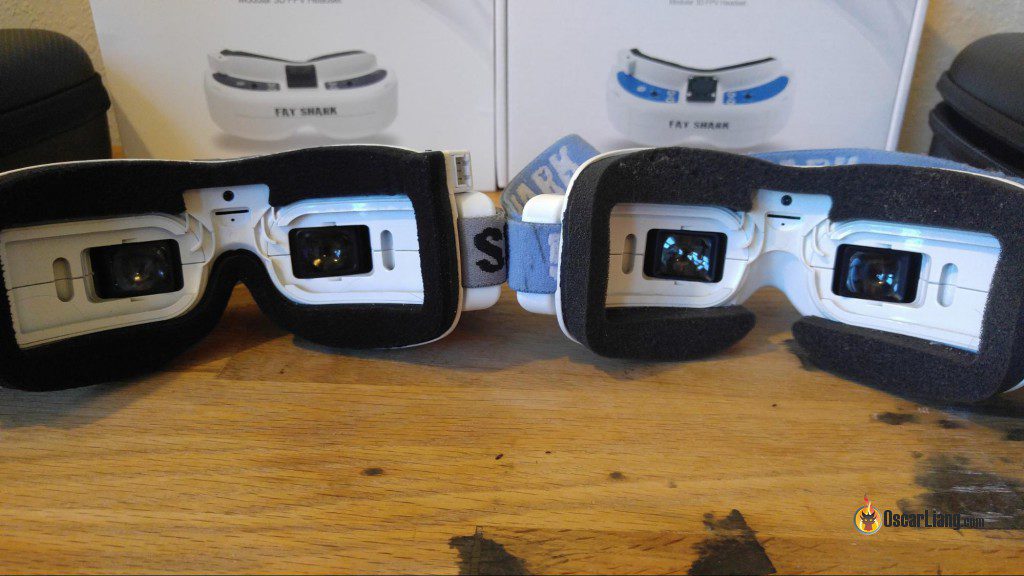 If I had to do it over again and only purchase one, I would sell one of my quads on eBay, and buy the HD3s. This is of course based on the fact that I could afford the HD3s. If you can’t afford the HD3 price tag – $500, then buying the DOM V3’s still makes a lot of sense.

The HD3s though are better in every aspect except perhaps the lack of ability to handle analog video in 16:9. It’s missing out on many new 16:9 analog FPV cameras. However, from my experience, I think the the bigger, clearer, and overall better image from the HD3’s is still going to win over that of the DOM V3s.

I have another article discussing the differences between HD3 and HDO.

I currently have Dom V3’s and I am looking at the Dom HD3’s but all of my analog are 16:9 and want to know what will happen to my image? Will it just cut the sides off or push the image in?

I think you asked on the forum too, replied there and I will copy my reply here as well:
the Dom HD3 switch to 4:3 when using with analogue, and it only switch to 16:9 when using HDMI port as far as i know…
So yea in your case the image will look compressed.

I’m about to buy some glasses but I do not know which one will be better, what do they recommend?

Thanks for the help.

I keep reading about blurry edges on the HD3s. Any thoughts?

Nice Review! I like reading your reviews and with this one I have a few questions. Im in the market for a new set of goggles and as i know now theres only a few new goggles that play 4:3. AttV3/FocalV2/DomHD3. I like the price of the attv3 but would really like to have what the Dom line offers. Is the stretch that bad on a 16:9 screen? Since I can find DomV3 googles for as much as the attitudes. Just trying to figure what pair would be best for me/my set up and what Im using it for. (freestyle/racing/standard fpv flight) Im running a 6 inch alien HS1177 and the ImmersionRC 5.8GHz. Thanks for any insight and help!

Hi.. New to this and have a question regarding a bebop 2 using the new sky view controller. Can I use the fatshark dominator HD3 headset. Any information would be great or what I need to make them work with the Bebop 2.

Thanks for the helpful review! I’m confused about the HD3’s inability to handle 16:9 analog. If I was going to also get a new FPV camera to mount on a quad , would it be better to get a 4:3 camera or a 16:9 camera? If I was to get a 16:9 analog FPV camera would the HD3 goggles distort the image or would it just not be in HD resolution?

The HD will still have an advantage over the DomV3, because the HDv3 is using SVGA while DomV3 is using WVGA standard.

the ipd of the domV3 is 58mm – 72mm and not 59-69mm. i tried the dom v3 and the hd2 and i had problems with focusing on the hd2. do you know if this problem is fixed with the hd3? the dom v3 is felt better for me. Dont know what i should buy now..
The dominator SE also has a bigger IPD

Hi,
Do you thing there is a lot difference between Attitude v2 with new Faceplate and Diversity inside, and the Dom V3 and HD3?
I was thinking about upgrading my Attitude v2 to Dom V3, but I think they are very similar and I prefer larger FOV in Attitudes with 4:3 camera.
Now whit the Fathsark SE, and the new HD3, do you think is a good moment to upgrade my googles?
Is it possible to update this comparision:
[IMG]http://tapatalk.imageshack.com/v2/14/12/21/3359923ed123bd6dca1f1980c4f637fa.jpg[/IMG]

Attitude V2 has been replaced by V3. The biggest difference between Attitude and Dombinators are the FOV and resolution. Check out this comparison

did you also have this blurry edges what they discuss in rcgroups?

I bought mine second hand and they were a little blurry. I was really bummed. I sent them to Fat Shark and they fixed them (replaced the optics) free of charge, minus shipping. When I got them back, I was still having a little trouble seeing through them until someone showed me how to change the contrast and brightness. I’ve been happy ever since.

Nice review! Unfortunately I will have to stick with my current setup! The Dom V3’s.