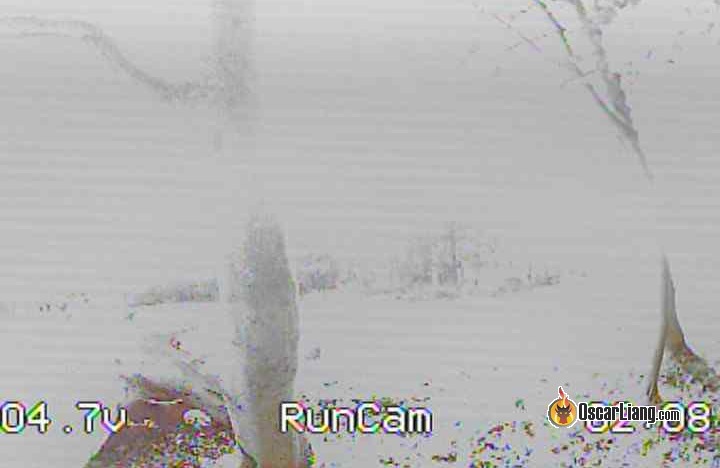 Since I published my review of the Eagle FPV camera, I have been asked numerous times about a problem where the Eagle gets a totally white screen when pointing the camera from the ground to the sky.

Replicating the “Screen White Out” issue

I couldn’t really suggest anything useful at the time, as I didn’t experience the issue myself for over 50 flights with the Eagle and Eagle 2. Initially I thought it could just be some defective cameras, but today I replicated the issue in my flight and I think I might’ve found a fix for it (or work around).

In my case, doing flips and rolls under the sun was no problem at all. But when there was a overcast (even just a little cloud flying over the sun), I could suddenly get a white screen for 1 second when doing flips.

This issue seems to be very dependant on lighting condition. I guess it was caused by the extreme difference in brightness level between the ground and the sky.

I think you could actually replicate this problem by covering your camera lens with your hand and letting go. The same issue seem to exist in Eagle, Eagle 2 and Eagle 2 Pro.

The fix is easy, simply enter the camera menu, go to “Image” and set “Max Gain” to 1. The camera “white out” time would be drastically reduced.

However, if you do not have the white out issue yourself, I think you should just leave “max gain” as it is. This change will lower the camera’s ability of handling low light. If you fly in dark environment you should have this settings set higher.

For those who need to change it, make sure to set it to 1. The default value is at maximum which is 9, and I found that even at 2 the white out time is about the same as 9.

Here is a video demonstrating the issue, and how the fix does the magic.

I have reported the problem to Runcam for further investigation, hopefully this could be fixed in future Eagle cameras.

Hi Oscar. I also had this problem after crash with my eagle 2 pro, plus the image look a bit more greenish on the shadows. Any idea on how to remove the greenish shade?
Thanks

what do people not like about the runcam night eagle 2

Happens in the micro eagle, too.

I have another but similar issue when trying to use the Runcam Eagle 2 16:9 (PAL) together with a FLYKEY RAFALE V1!
The Picture is mostly always far to bright! Like a constant whiteout.
With the Aomway Commander Goggles (in 16:9 mode) the picture is perfect! With the settings mentioned above.
No Idea whats going on here….

can you not adjust the contrast and brightness on your goggles?