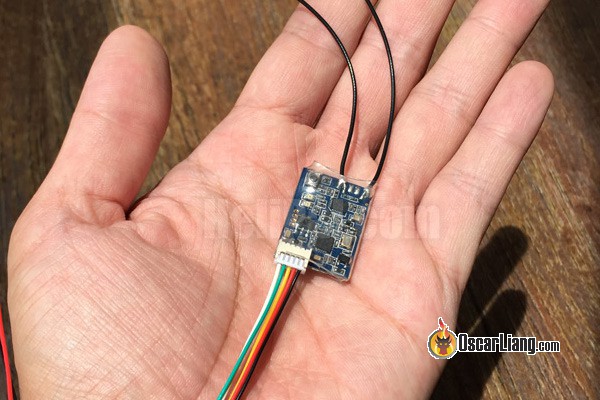 There are a whole range of radio receivers (RX) for the Frsky Taranis, and I have rounded up the ones suitable for mini quads and micro quads in this article. We will explain the differences in spec and hopefully it can help you choose the one for your next build.

All these receivers mentioned below are Frsky Taranis compatible RX, that work with Frsky radio transmitters (TX) such as the Taranis X9D, X9D Plus, Q X7, X9E, Horus X10S and X12.

There are also 3rd party receivers that are designed for Frsky radio system. If we left out any RX please let us know in the comment section.

Tutorials on how to use Frsky RX, tips and tricks:

As an size comparison and overview, here is a compilation of the most popular radio receivers for mini quads on 2.4GHz and 900MHz from brands including Frsky, Flysky, TBS Crossfire, Spektrum and Futaba. 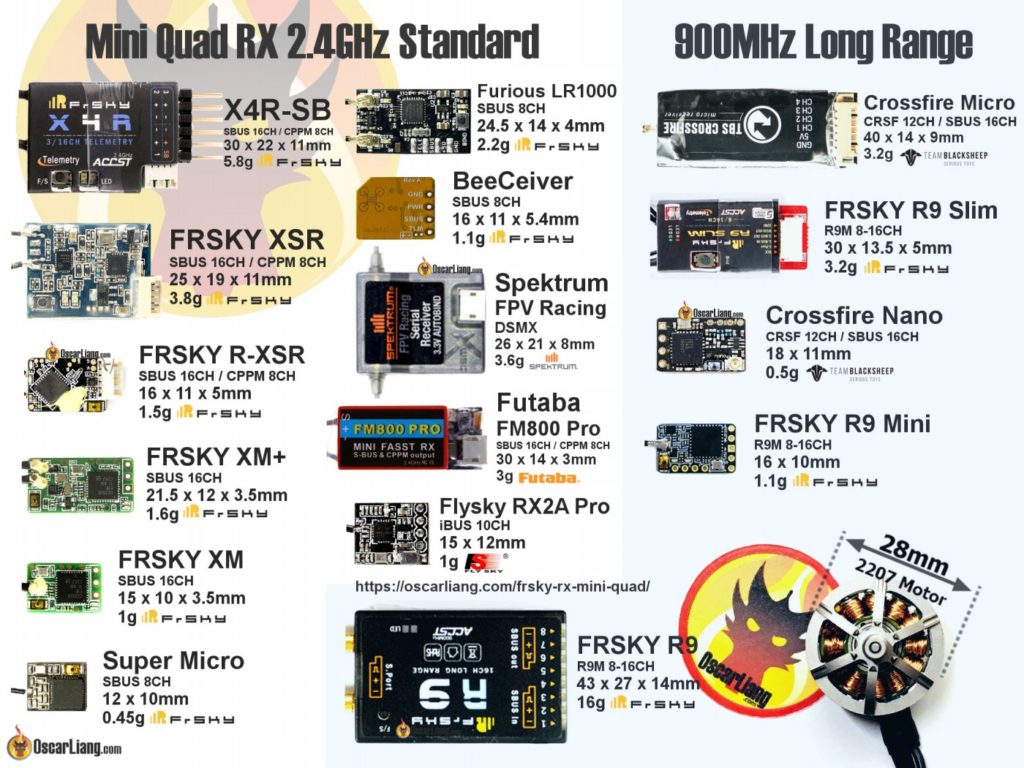 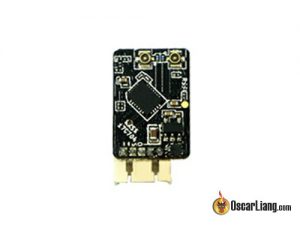 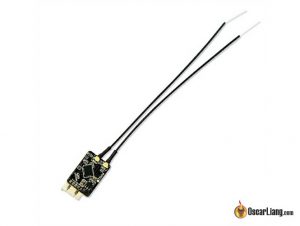 Review: why you should and shouldn’t get this RX.

The R-XSR is the latest Frsky receiver as an upgrade to the popular XSR. It’s been made lighter and smaller yet obtains all the same performance and features as the XSR and X4R-SB receivers. Unlike the XSR, the antennas are connected with tiny IPEX connectors 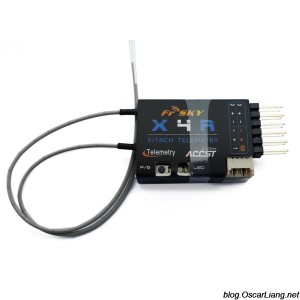 The X4R-SB has nearly identical size to the D4R-II. It was one of the most popular RX’s for mini quad because of the SBUS and SmartPort Telemetry supports, until smaller RX came along. 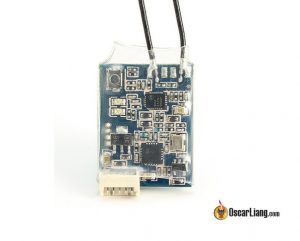 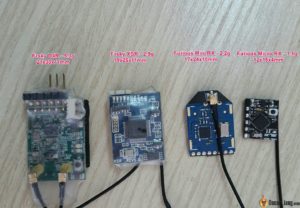 The XSR is a size/weight upgrade of the older X4R-SB RX. It has exactly the same capability as the X4R-SB, but it’s considerably smaller and lighter.

However some XSR owners claim to have shorter range than the X4R-SB, probably due to the incorrect length of active element in the antenna (the exposed part). Therefore if you have range issue you might want to experiment with 31mm antenna length. 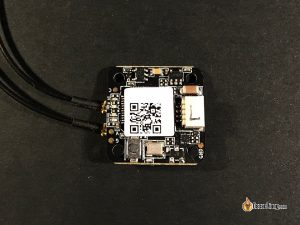 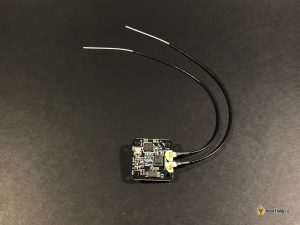 The XSR-M (or XSR-E) is basically the XSR redesigned on a smaller, square board that is stackable on top of a FC or PDB. It’s perfect for micro quads that uses 20mm FC and still allows Smart Port telemetry. The XSR-M is also capable in larger racing quad such as 5″ due its full features and smaller profile. 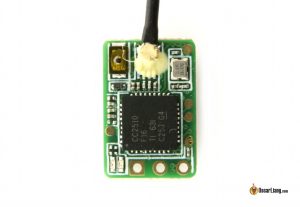 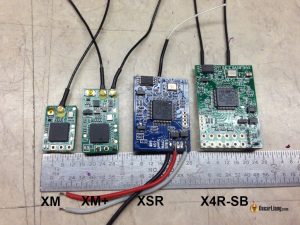 The XM RX is made for micro builds that don’t require full range. It’s one of the lightest and smallest RX in Frsky’s radio receiver line. However it doesn’t have telemetry, only a RSSI output. 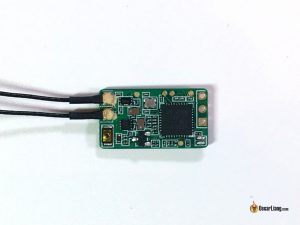 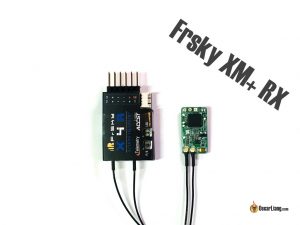 The XM+ is a diversity version of the XM (having 2 antennas), which allows it to perform full range comparable to the X4R-SB and XSR. It also supports 16-channel SBUS, but no smart port telemetry, only RSSI output just like the XM. 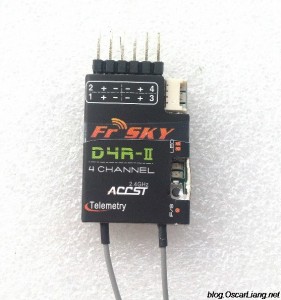 The D4R-II is one of the oldest RX in the mini quad world. It was made popular because of the compact size, and support for PPM (it only requires 1 cable for 8 channels).

However this receiver is kind of outdated now as smaller SBUS receivers are preferred for the lower latency and compactness. 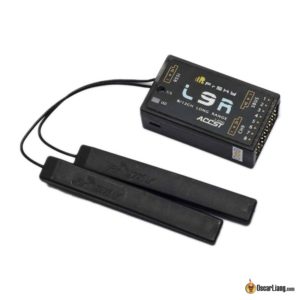 The Frsky L9R receiver is designed for longer range and can be used with the Taranis transmitter’s built-in 2.4Ghz TX module. The spec states that this receiver should be able to provide two times the range of a X-series receiver, which is about 3Km range. 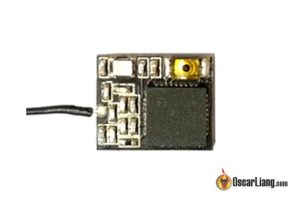 This is probably the smallest PWM output receiver for tiny wings and planes. It has large solder pads for VCC (5V) as well as GND, could be used as a PDB for your components. Works with D16 protocol.

Another great little receiver for tiny wings and planes. Similar to the XMR, but it can also output PPM and SBUS. The only downside would be it supports D8 protocol. It’s half the price of the XMR as well.

It can be flashed with the same Frsky XSR firmware (both FCC and EU-LBT versions), so it’s possible that this is just a copy. It has integrated SmartPort and “dual-way telemetry” (whatever that means, there is no manual), and works on D16 air protocol.

There are more Frsky RX on the market made by 3rd party companies, check out this list: http://bit.ly/frsky-rx

If I may pick your brain….

The Jumper R1F is a tiny ‘circuit board only’ receiver, which I believe is basically derived from an equivalent FrSky receiver and supports OpenTX/SBUS/Telemetry. It’s product specs say range > 2.0km.

If this is true, one could control a giant scale gas airplane with this (as long as a powerbox is used to power the servos).

What do you rate the new radio master tx12 compared to say a Flysky i6x?

Hi Sir,
1) Can you suggest compatible Receivers for Futaba 10J transmitter (The original receiver R3008SB is a T-FHSS telemetry-capable receiver that features S.Bus and S.Bus2 ) ?
2) what is you opinion on Futaba 10j Tx Rx for long range freestyle FPV ?

Sorry I am not familiar with Futaba’s products.

For the Spektrum receiver…. the 4648 does not have telemetry.
On the other hand the 4649T does have telemetry (connected to Tx UART pad and running SRXL bidirectional Serial Rx protocol).

Thanks Arne, I will add that to the list :)

I am having real problems with my naze32 / x4r setup
all was working fine until the other day when I lost the ability to arm . I went into betaflight receiver tag and was not getting any movement on any of the bars on the screen . so I thought it may be the naze. I brought a new one soldered it in and same problem . I then thought it mat be the x4r that had blown somehow and still the same problem. I have tried the new and old rx on both nazes and still the same problem . I have no idea where to look next other that the power supply but that seems fine as the boards power up and the motors chirp