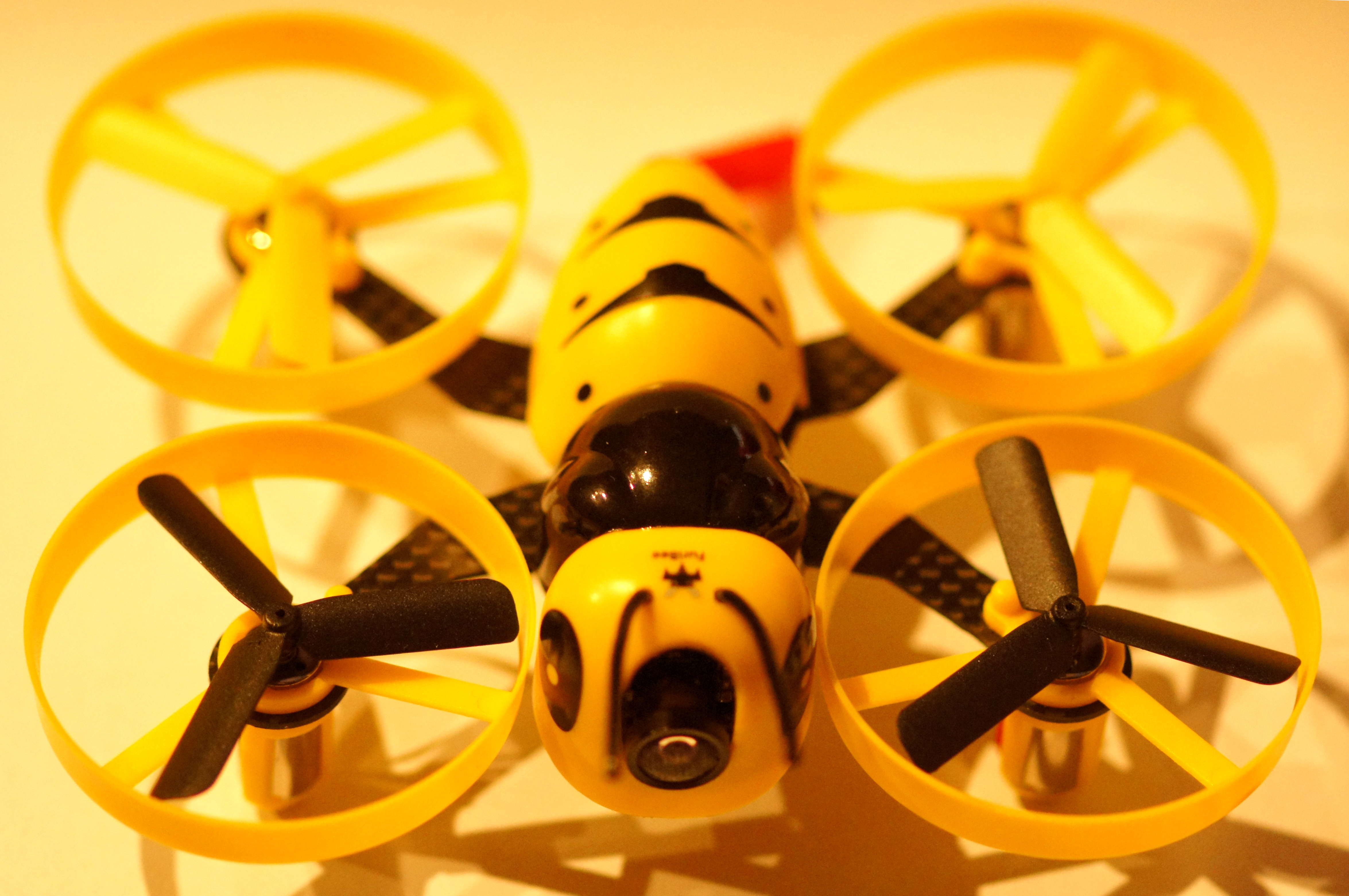 In this review we are checking out the FuriBee F90 Wasp micro brushed quadcopter, a 90mm small racing drone.

The FuriBee Wasp is available at Gearbest (link) in one of three variants:

The unit we reviewed is version 1 which includes the DSM receiver. There is also another version that support Frsky receivers. This article is divided into the following sections:

Wasp comes in a nice package – well secured, no damage to the drone or the packaging even if the external package was damaged. 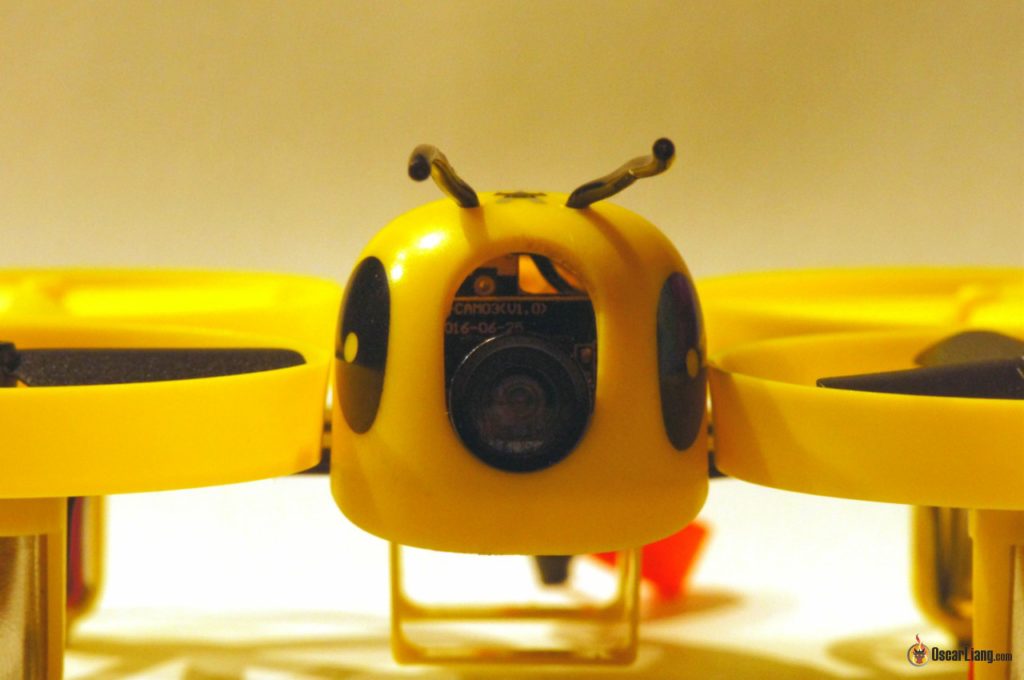 What’s Inside the Box

Connecting Flight Controller with Computer Via USB, however I encountered a small issue: the USB port location is not easy to access, and the cable didn’t fit due to the placement of the “wasp” housing – my solution was to get an USB extension cable with smaller end.

Once connected the FC to computer, I found Betaflight V3.0.1 was already installed.

Initial check went fine, Gyro and Accelerometer was working as expected, also I did an ACC calibration.

Because I’m a FlySky user, i had to take the wasp apart to replace stock DSM receiver (tiny one) with a flysky receiver. If you own a DSM compatible TX, you don’t need to do this.

First of all, I removed 5 phillips screws to take off the wasp’s canopy (watch out the 5 screws have different length). Underneath you can see the FC and stock receiver, 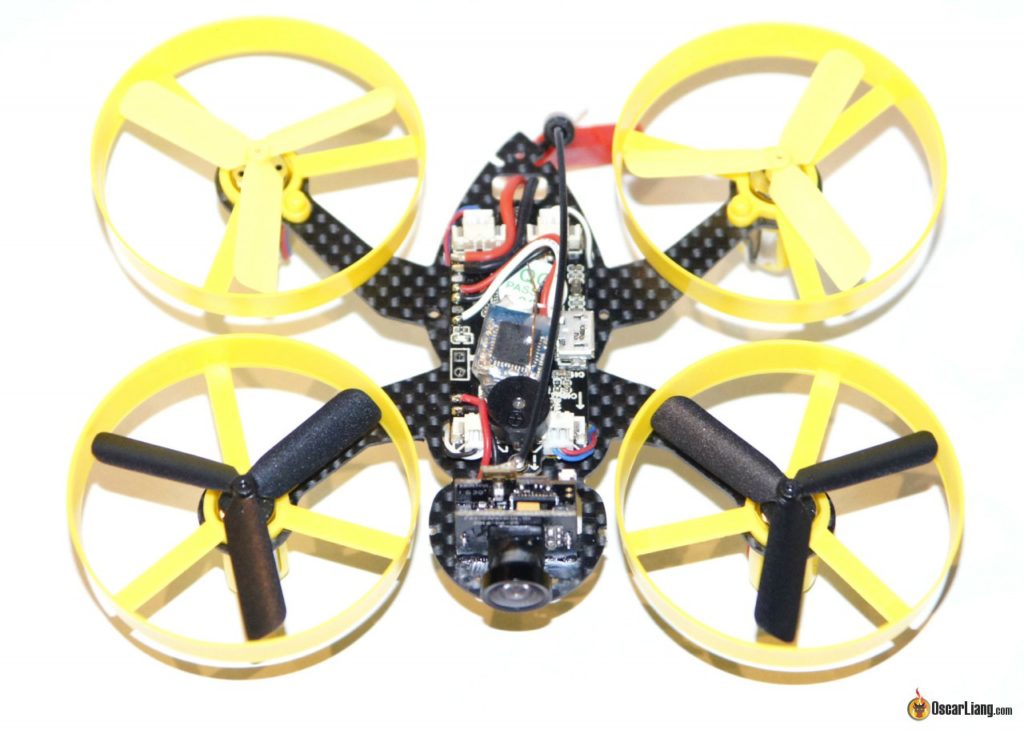 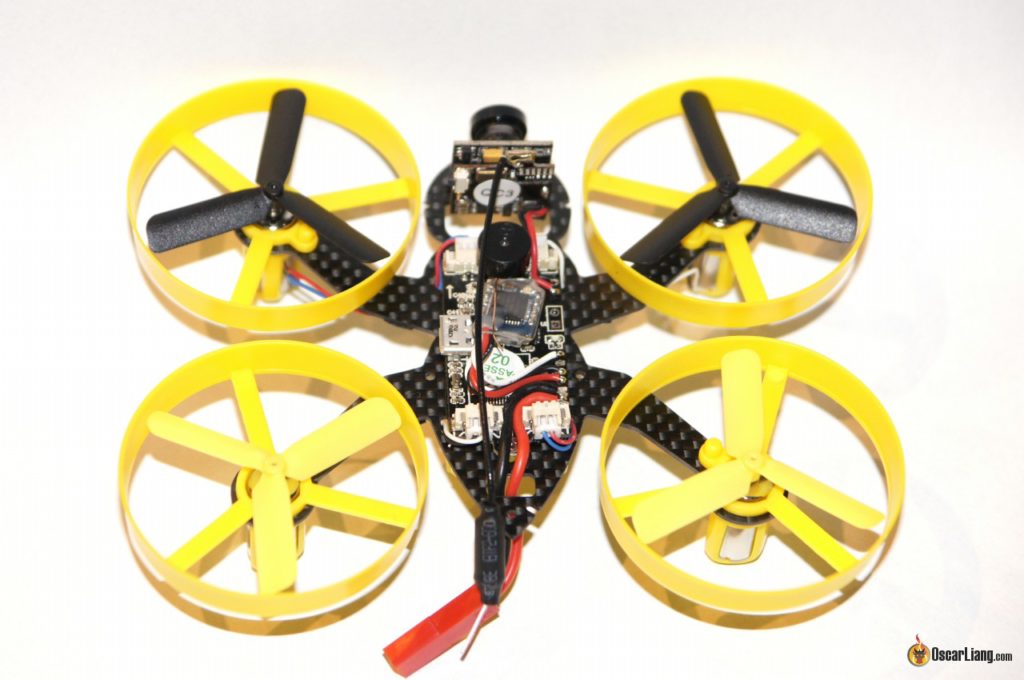 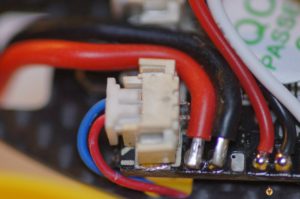 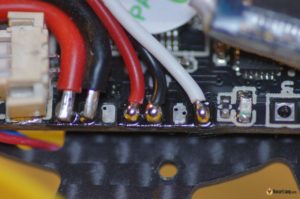 I had to unsolder 3 cables and removed the DSM receiver and solder 3 silicon cables for the flysky receiver. 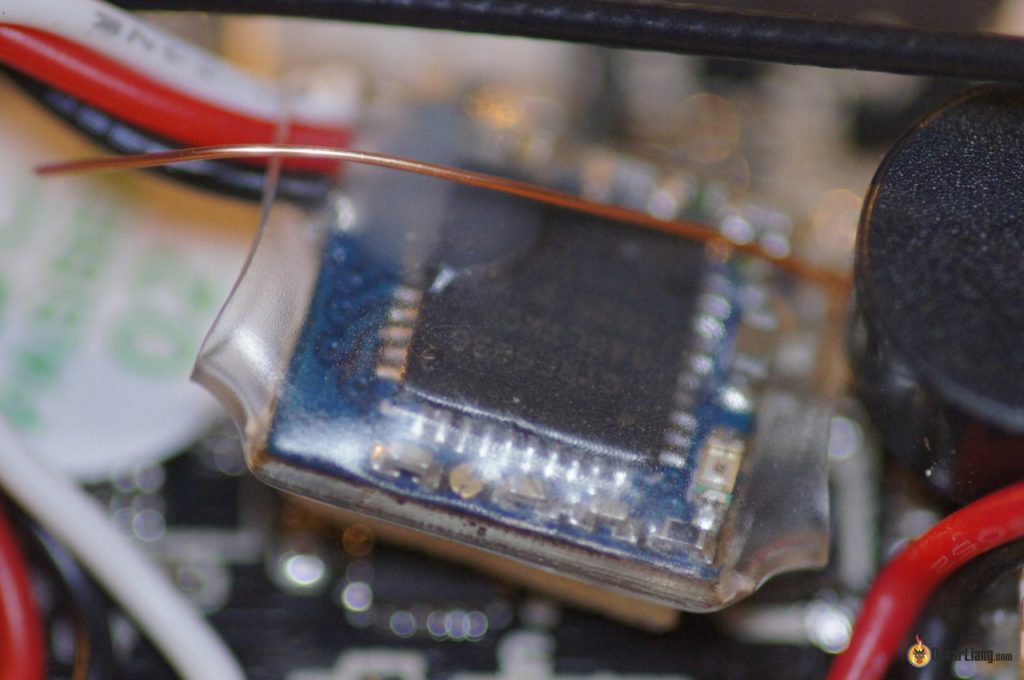 After that, I placed my RX in a good spot on top of the FC, and have my antenna reached out like a second “sting”. As you can see the frame has additional cut out to accommodate the cables: 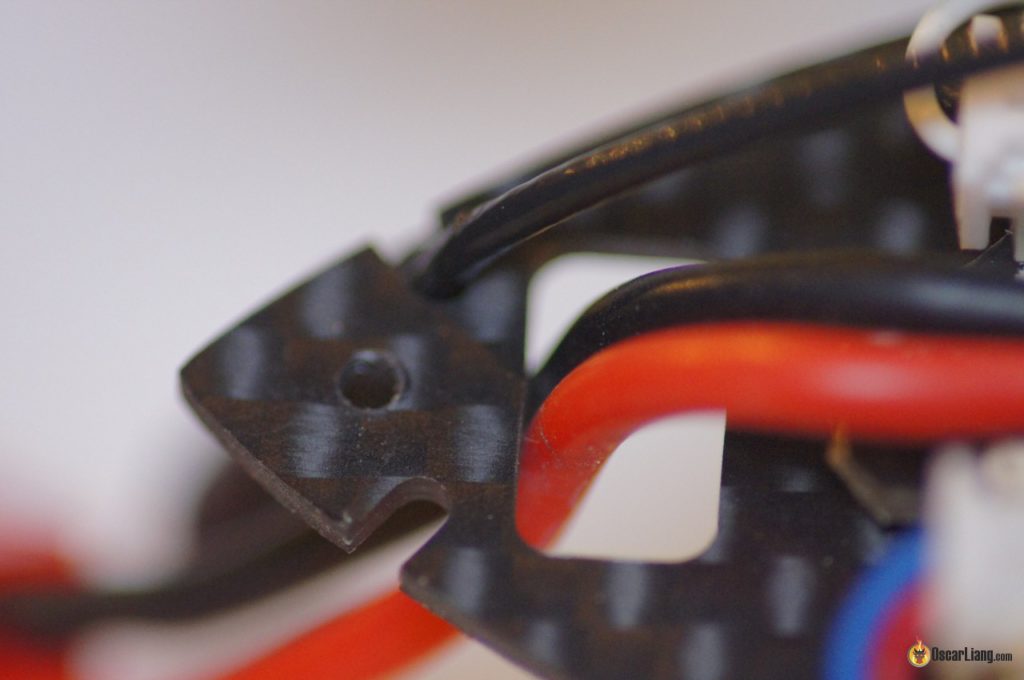 While I had the canopy removed, I investigated the VTX + camera combo. It is a 25mw unit with a dipole antenna as a sting of a wasp – antenna is well placed and hopefully won’t get sucked into spinning props.

One thing I didn’t like was that in order to change VTX channel, you need to first remove the canopy, because there is no quick access to the button. 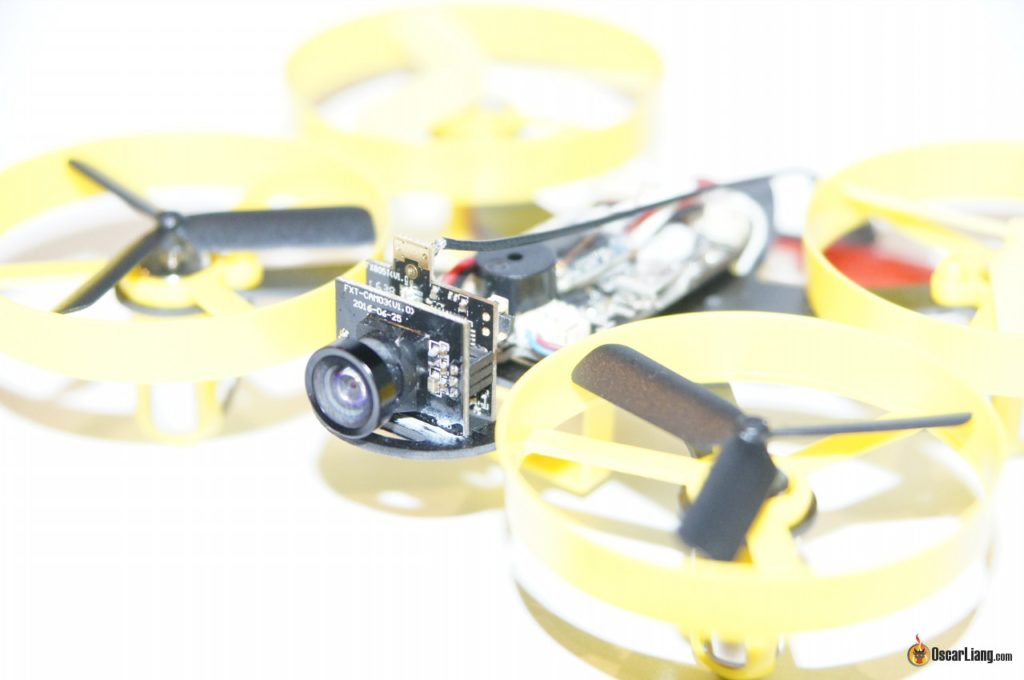 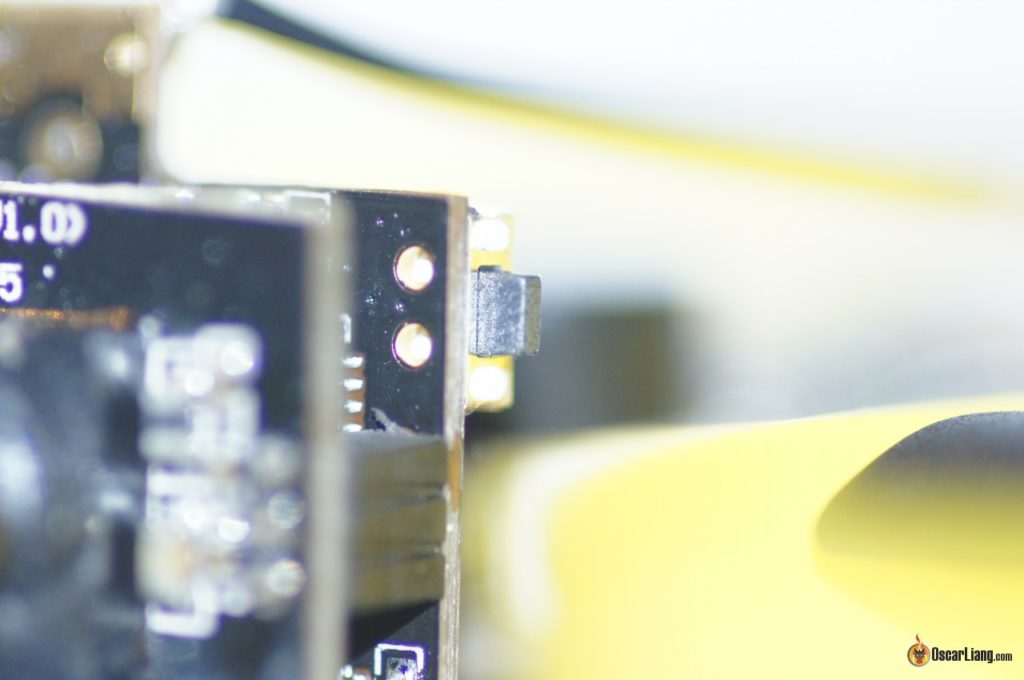 Second problem I found with the VTX/Camera combo was the tilt angle. It’s not tilted at all, and it’s impossible to do so… as it is glued in place. 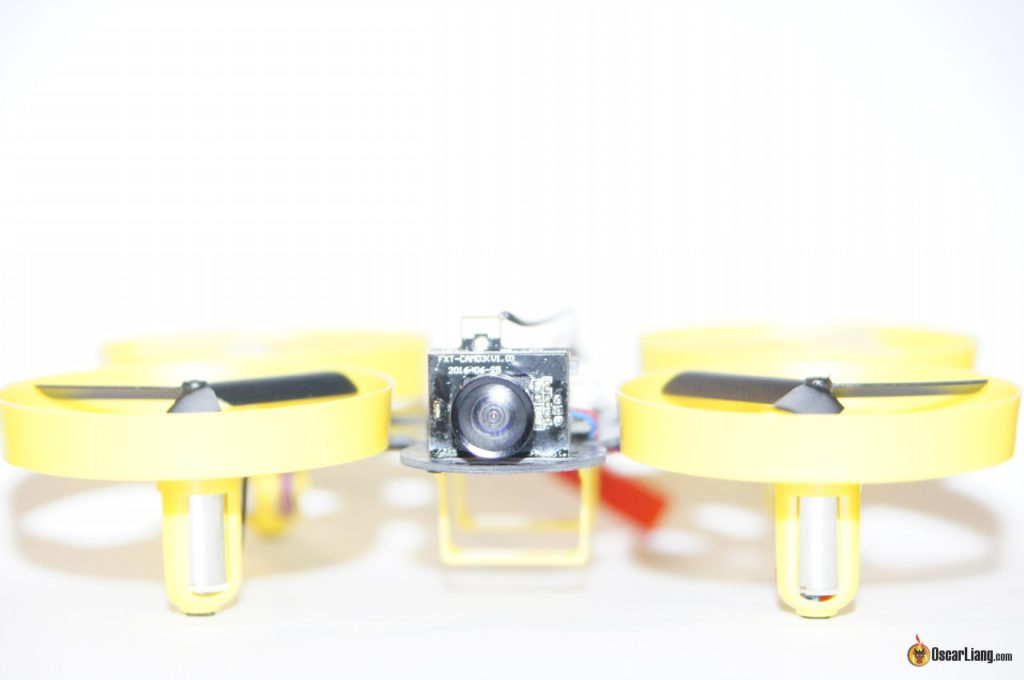 I tried several different bands and channels with my cyclops FPV goggles (which has auto scanning), every time the image was crystal clear. 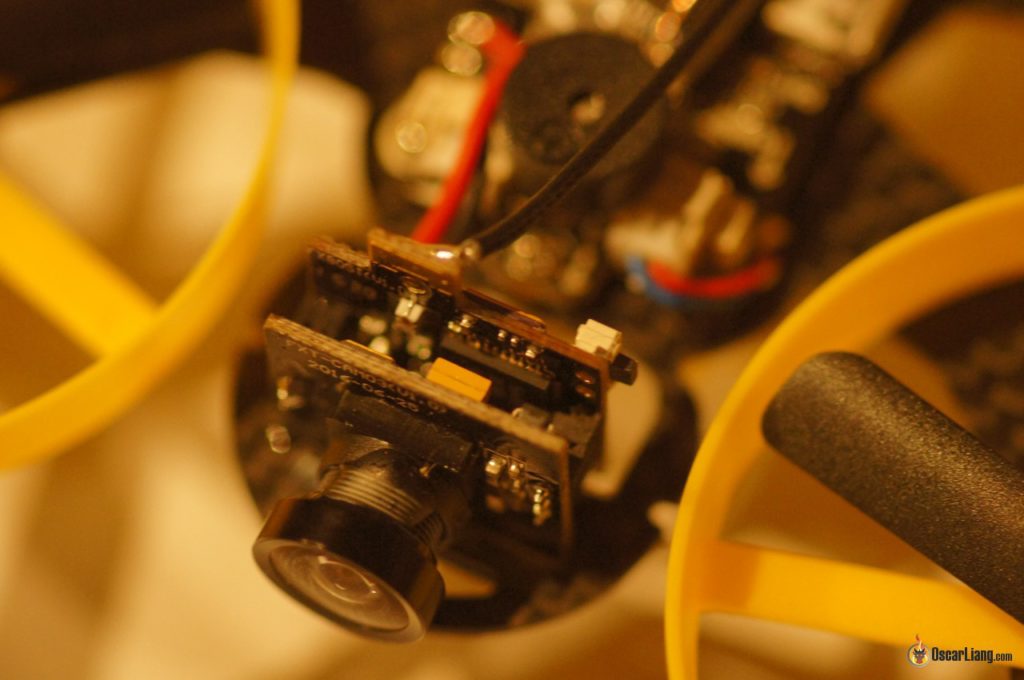 Finally I put the housing back on, and continued to setup Betaflight, such as Reciever (ibus) + failsafes on FC, low voltage alarm (aka buzzer), RX failsafe and bind were done earlier.

I’ve setup failsafe to drop immediately as i think it’s a safer option. I’ve configured it to  arm on one AUX switch and failsafe + beeper on second AUX switch.

I prefer to fly in Rate/Acro mode so i didn’t test Angle/Horizon modes.

When I armed it, the motors started to spin and one of the props just flew off and went missing…

After some searching, I tried a few ideas to avoid another prop flying-away… I found CA superglue worked the best. On top of that i found an issue with the plastic mounting hole on the carbon frame. There is a screw touching the propellers. IMO, this is a design flaw.

My first flight was typical, hovering around the room and see how the wasp flies. It hovered at around 45% throttle (when battery is full), flight times was around 5-6 minutes. I landed the quad when voltage dropped to 3.4V per cell, then I balance charged it on my LiPo charge. There was 211mah pumped into the battery instead of the specified 400mah. This suggests the quad came down before it uses up the battery, possibly because the battery C rating is below demand, or the specified capacity is wrong.

I have flown this quadcopter around the house many times in FPV, chasing my kids and scaring my wife. I think this is the purpose of this quadcopter, it’s fun flying it at home/indoor – and it worked great.

After a few packs the propellers started to fall off again, I decided that I’ll use one of the replacement props… but it also went missing after a crash, so I had to use CA glue in the end.

Later I tried to do flips and rolls, but of course, i forgot to adjust the expo and rates. I crashed into the pillow in my bed, and here came the another disappointment: one of the ducts snapped. They are connected by some thin plastic struts, and they are very fragile and bendy. If you fly at home, don’t expect them to save the propeller against the wall… because they won’t.

Glue to the rescue once again now the ducts is back in service. I also adjusted my rate/expo values… and the Furibee Wasp can finally flip nicely.

At this point i should stop messing around with it and be happy with how it flies. However i wanted to try flying outside.

After a few more packs flying outdoor I found the following:

This quad is not the most crash resistant quadcopter, and it requires some love and modification to get it flying nicely. Therefore it’s probably not designed for complete beginners.

However it has true acro mode, and it is fairly small, so you can practice flying manually and have fun anywhere. The main carbon plate is 1mm thick and it’s a bit flexible, however I still haven’t managed to damage it yet.

The Furibee F90 Wasp feels a bit sluggish during flight (lack of power), if you intend to fly outdoors, be cautious of wind.

Hi,
I’m looking for some cli dumps, can youhelp me?

How did you solder in the fly sky receiver?

I won’t get more than two minutes out of this insect, have three lipo’s but all the same