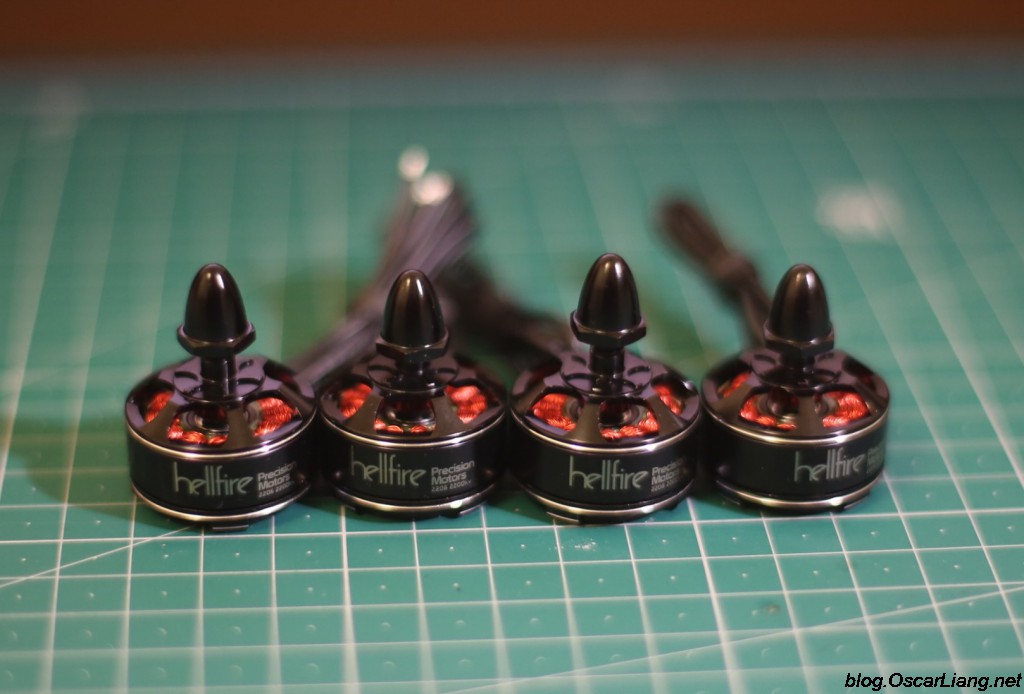 RadioC sent us some Hellfire 2206 2200kv motors to test out. How do these £14 mini quad motors compare to the more expensive Cobra motors with similar specs? Let’s find out.

Get your Hellfire 2206 motors from RadioC. Reviewd by Artur B, edited by Oscar.

Motors came in two boxes, all with clockwise shaft threads. Along with motors there are 16 x M3 mount screws. They are suitable for mounting motors on 3mm and 4mm arms. 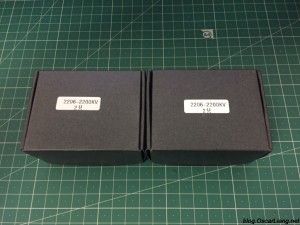 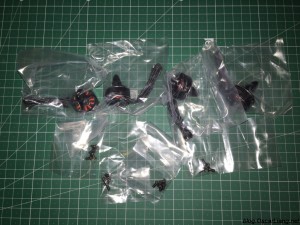 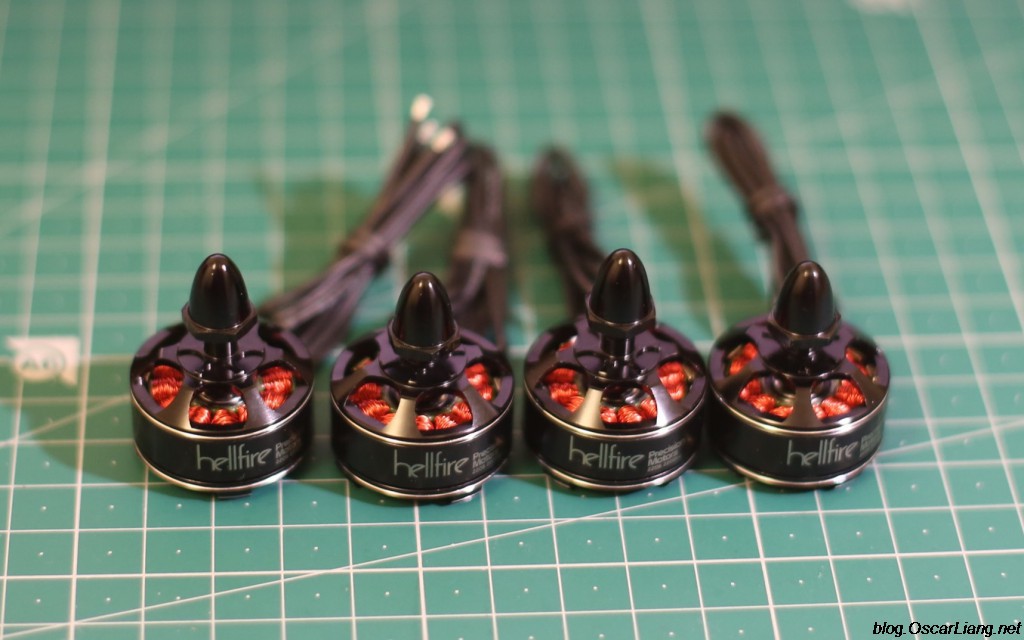 Motor coils is bright red, which isn’t commonly seen in other motors we have reviewed. Coils are wound very nicely almost like it was done by hand (maybe it was but not confirmed). 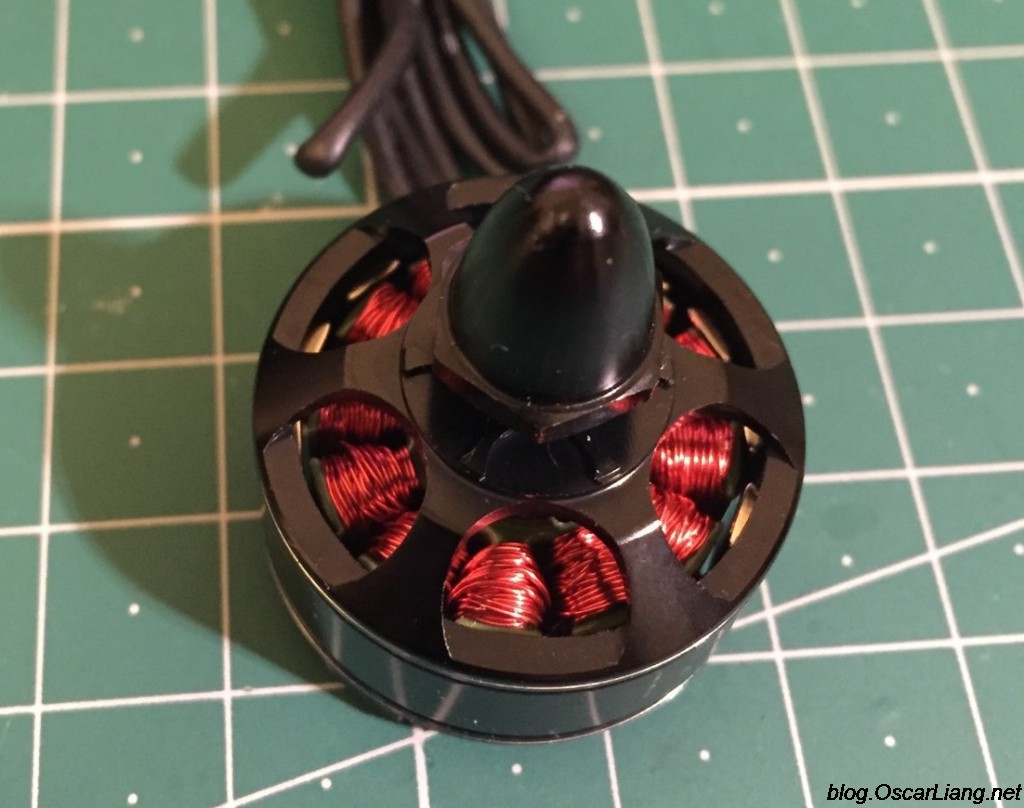 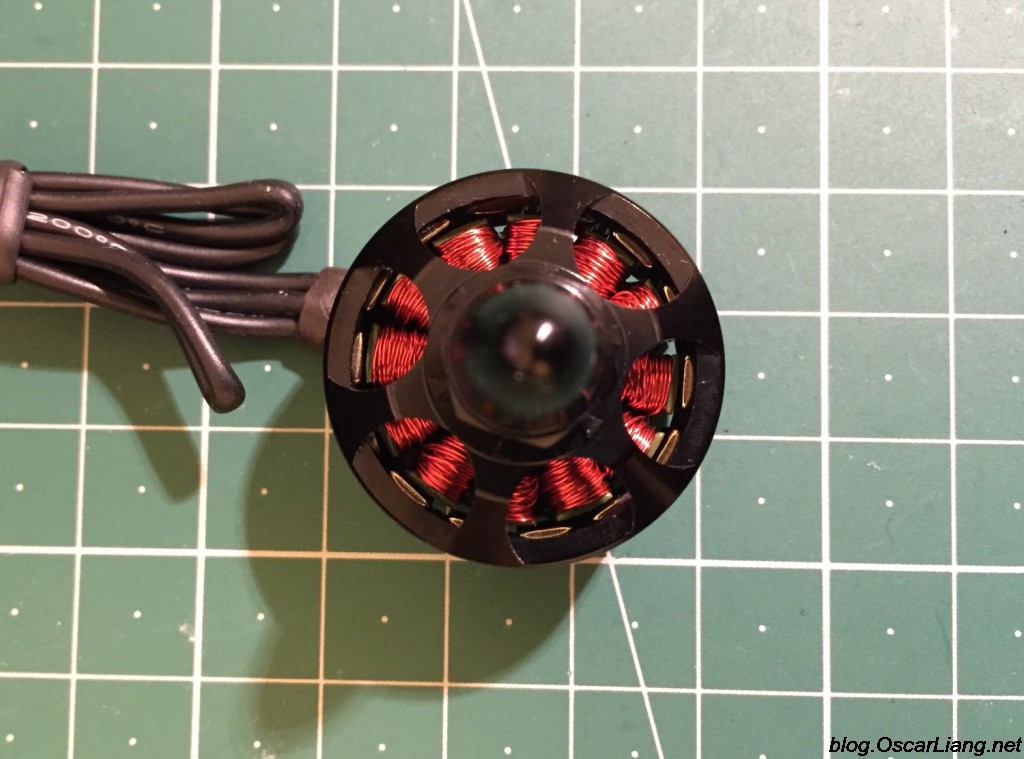 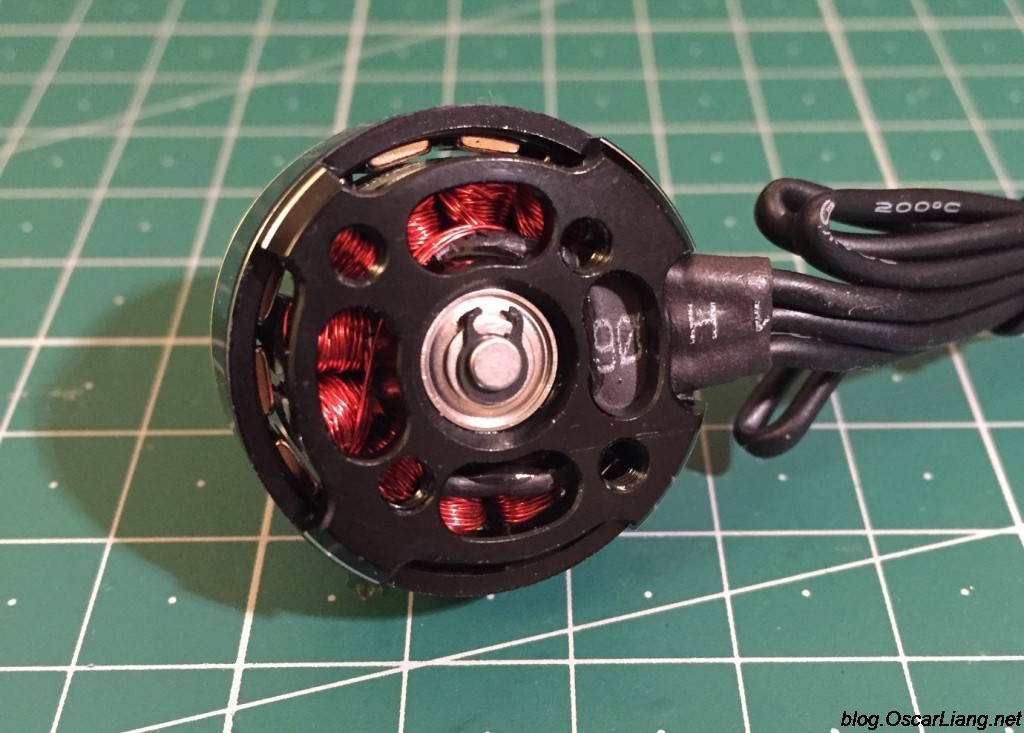 Hellfire 2206 with uncut motor wires weights 34g each. After cutting the wires to about 3cm, the weight goes down to 28g which is pretty standard weight for 2206 motors. Cobra 2206 2100kv for instance weights 29g with the same length of wires. 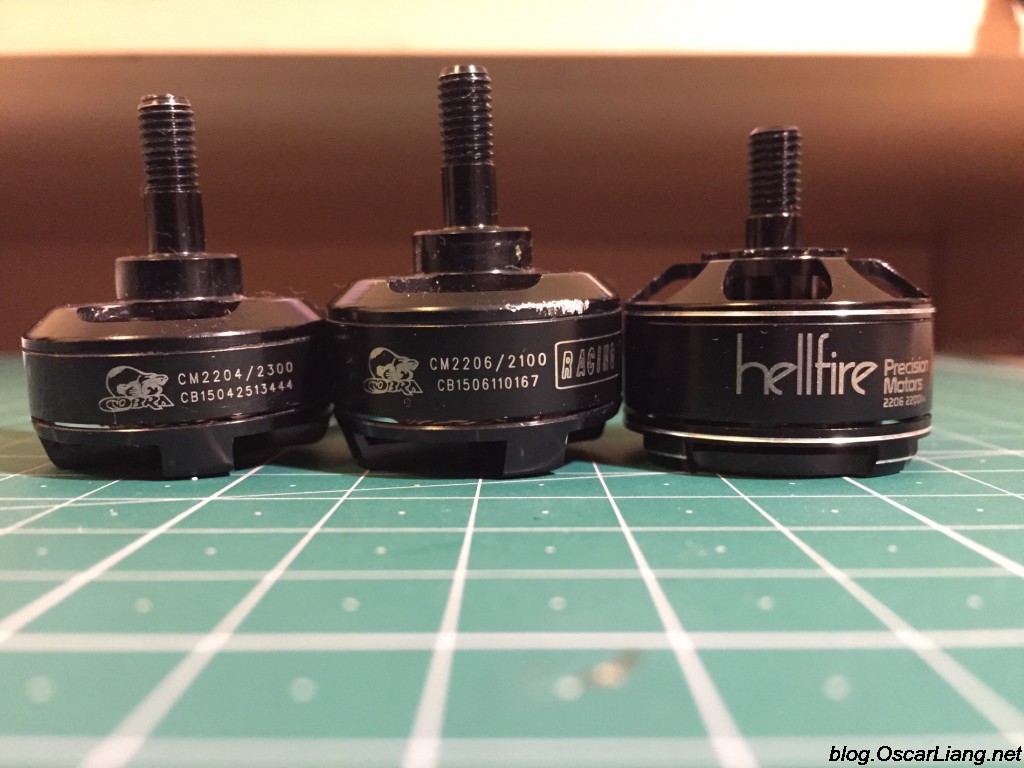 2206 motors can generally generate more torque than the 2204 motors, as well as having slightly lower KV, it makes perfect sense to put 6″ propellers on this motor. The extra motor weight is compensated by the additional thrust generated from the larger props.

I don’t have a thrust stand so I cannot run the thrust tests myself. However RadioC did the testing and I am sharing it here.

According to this motor thrust test, Hellfire motor with HQ 6045 on 4S battery can generate around 1300g of static thrust @ 100% throttle. In real flying situation that number will be smaller, but with over 1Kg of thrust per motor – still a very impressive figure.

I am testing the Hellfire motors on my EVO250 frame. Previously I used Cobra 2206 2100kv motors on this quad.

Also I swapped out all the supplied prop nut with nyloc nuts (Nylon Insert Lock Nut). From my experience, they hold better and doesn’t come loose during flight or even in crashes.

Flying experience with these motors was great. Due to the slightly higher KV spec, I feel like they have a little bit more power than Cobra 2206 2100KV. HQ 6×4.5 props are not a problem for the Hellfire’s. Tons of thrust and snappy response.

Flying a 6″ quads always gives me a more floaty feeling, certainly not as agile and nimble as a 5″ mini quad. But still with the amount of thrust generated, racing, or acro freestyle are not a problem.

After changing props few times I noticed that the thread on one of the motors was wearing out more than the others. This is something I have never had on Cobras. Looks like material used for the bell and shaft is softer.

Shaft is shorter as I mentioned and the Nyloc bolt can only go in half way. With the HQ 6035 props the nyloc nut can go deeper because the props hub is thinner. 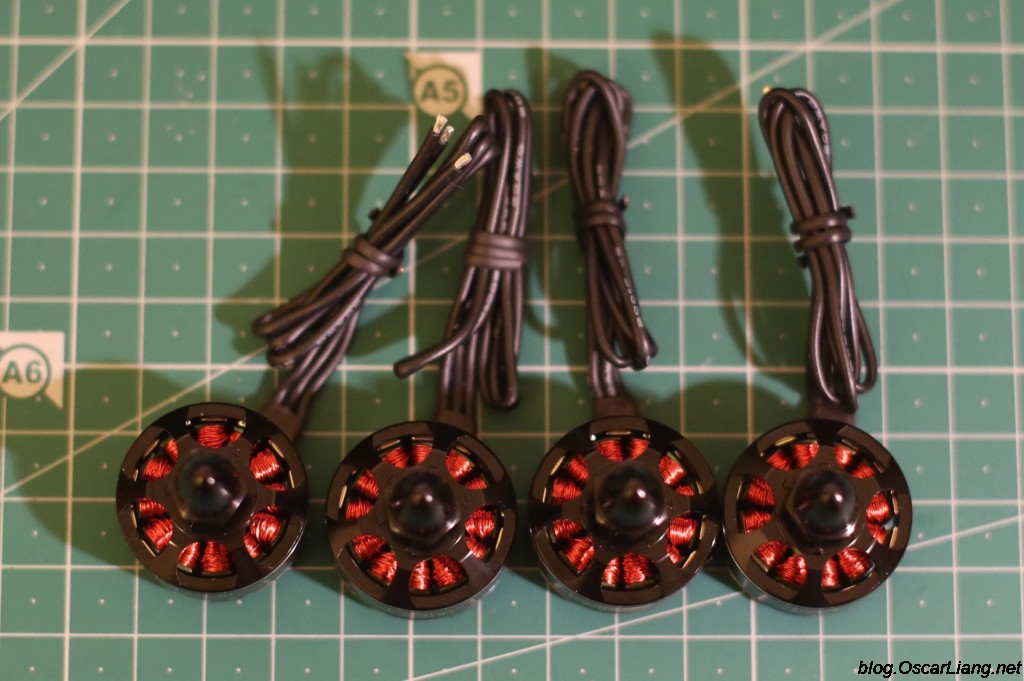 Motor durability test was done in a very harsh conditions: Scottish frozen ground and stones at the race course. I had quite a few crashes (even managed to damage carbon fibre on my frame) and had mid air collisions with another mini quad (not my fault :) ). Only a few scratches.

I didn’t notice the vertical play on the shaft, that usually happened with Cobra after few crashes. The bell was still in their initial position.

Things that could be improved:

^^^^ yes they are made by AIRBOT I think and indeed are really good motors.
I have a set from Multirotormania.com and they have been great.

I was wondering if you could also acquire some T-motor MN2206-2000 motors for comparison to these as well?

These are the same motors sold By Surveilzone under RCINPOWER NAME,
Some RC shops are buying these motors with there own name put on them, like HELLFIRE and READYTOFLYQUADS.
They are pretty good motors. I fly the 2204/2300kv versions on 3 of my quads, They have a little more power, but the same efficiency as the SunnySky 2204’s with 3S.