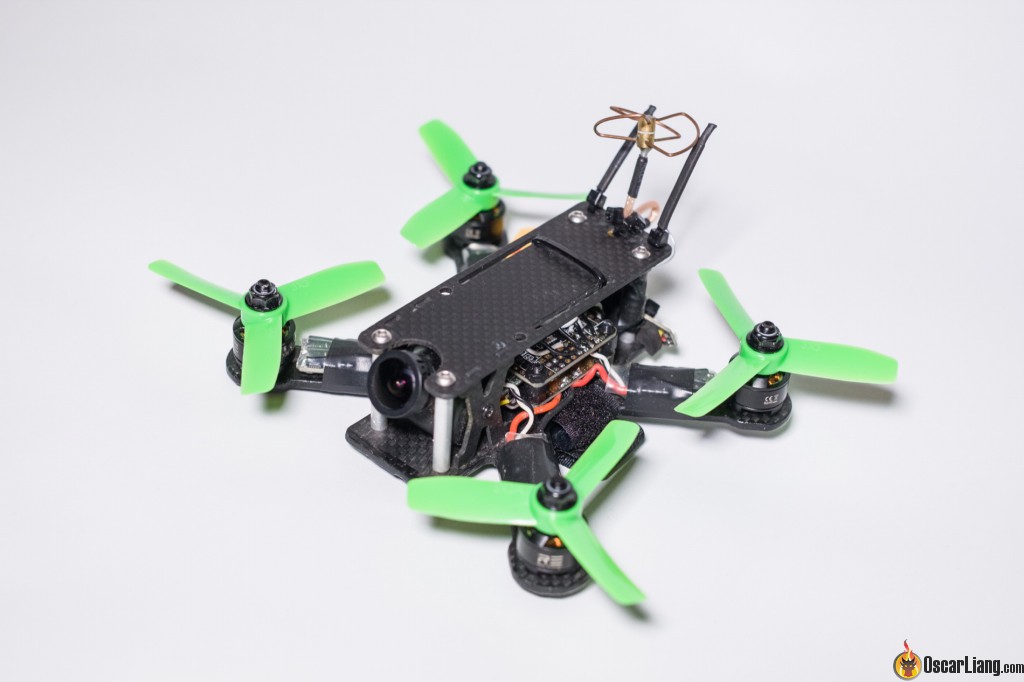 We reviewed the 5 inch Menel Mini Quad frame not long ago, now let’s take a look at it’s little brother, the 3″ Menel X3 from Hibernagen. 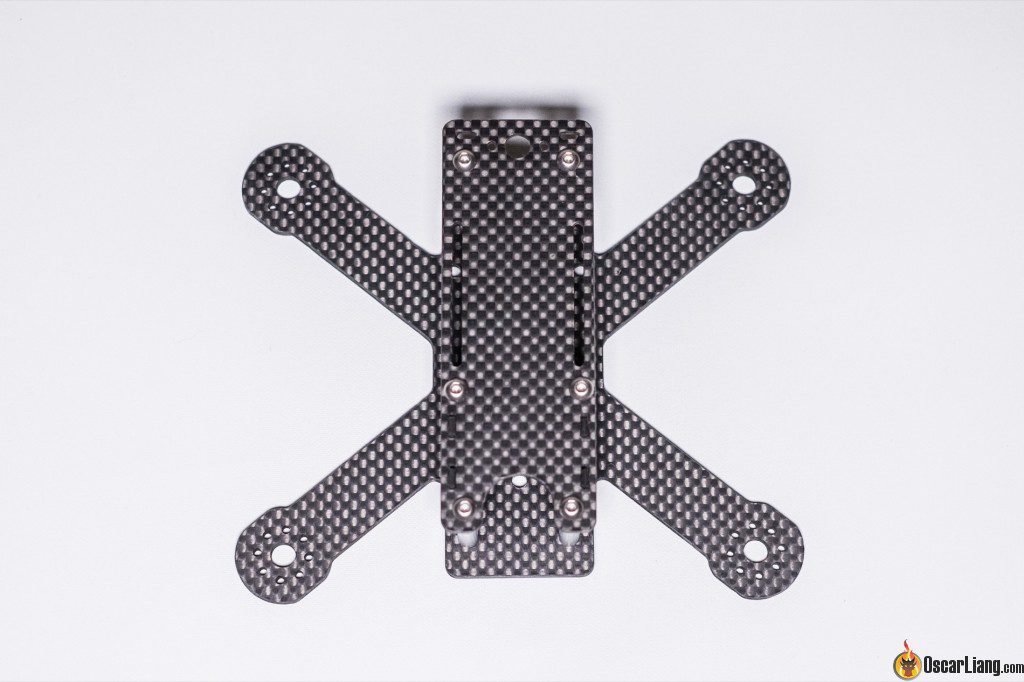 There are several cut-outs on the frame to allow fixing lipo straps and antennas. 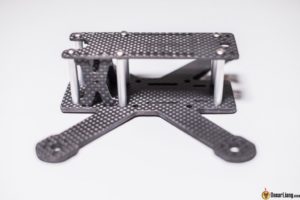 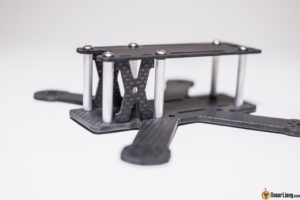 Menel X 3 can take HS1177 sized FPV camera, which can be installed either using supplied side plates or camera bracket. 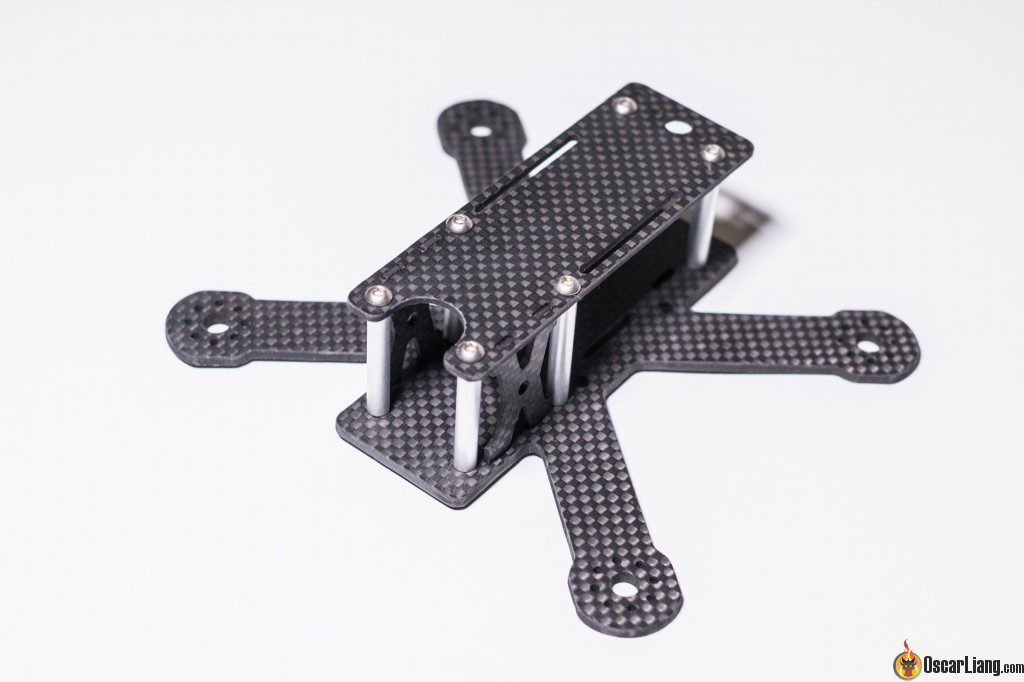 Good things about the frame: 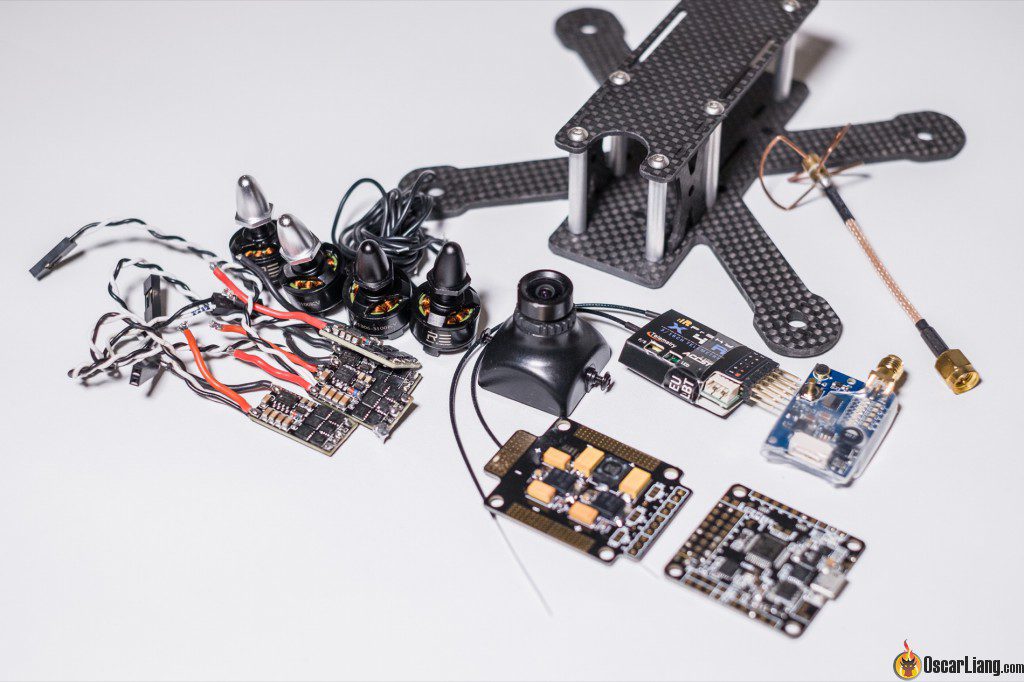 I filed all carbon fibre edges using diamond files before I start building. I also applied Loctite 401 glue on the arms, front and back section of bottom plates, to prevent carbon fibre splitting during hard crashes.

Arms are very short on the 3″ frames, so the ESC and motors needs to be mounted in special ways. I soldered the motor wires over the ESC in a loop and heatshrinked it. By doing this the ESC can sit closer to the motor and on the arms. 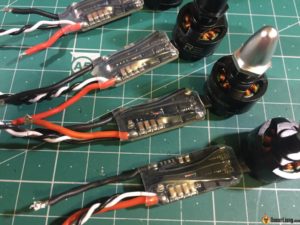 Soldered ESC to Demon Core PDB along with XT60 wire 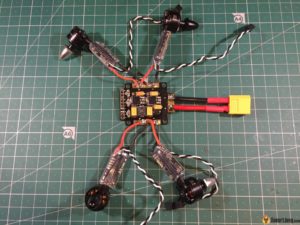 I found that Demon Core will hit the two standoffs in the middle, so I decided to remove them from the frame. On such small fuselage it wouldn’t make much difference IMO. 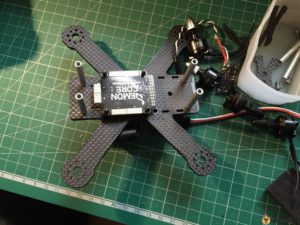 Motors were installed to the frame, and I soldered wires for video transmitter and FPV camera to the PDB. Also added LED wires, VBAT and power to flight controller. 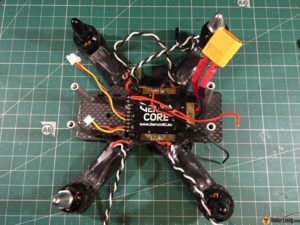 Because of the limited space on this frame, X4R-SB radio receiver was de-pinned, wires soldered directly and heatshrinked.

Next, I soldered X4R-SB directly to Dodo flight controller, and that to the Demon Core PDB. The plan was to sandwich X4R-SB between PDB and FC. 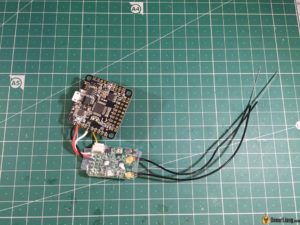 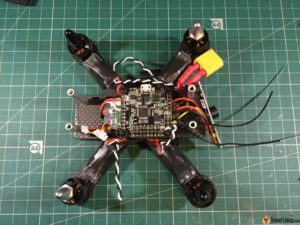 Soldered LED strip (with buzzer) and adjusted the length of the ESC signal wire, before I soldered them directly to flight controller. 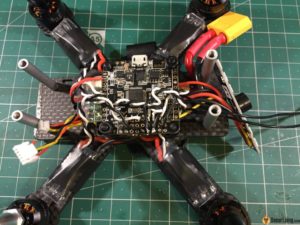 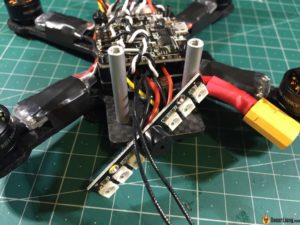 Screwed everything to plastic standoffs and fixed LED strip to the rear standoffs. 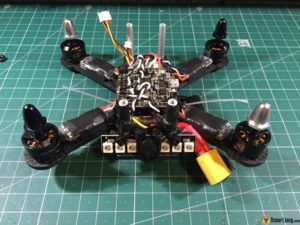 Fixed video transmitter to the underside of the top plate by double sided tape and also a zip tie. 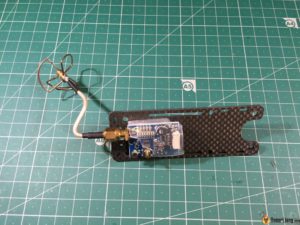 Attached top plate to the frame, connected all wires and fixed radio antennas to the top plate using zip tie and heat shrink. 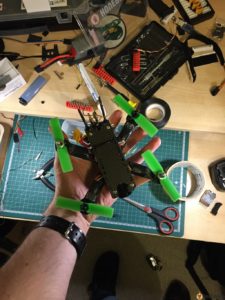 All what was left to do was to connect the power and configure Betaflight. Fully built frame weights just 200g. With 4S 850mah 45C lipo that’s 300g

It is not really a quad to carry a HD camera, but I did a test with RunCam HD and it handles it pretty well, just makes flying a bit mushy in yaw axis because of the weight distribution. 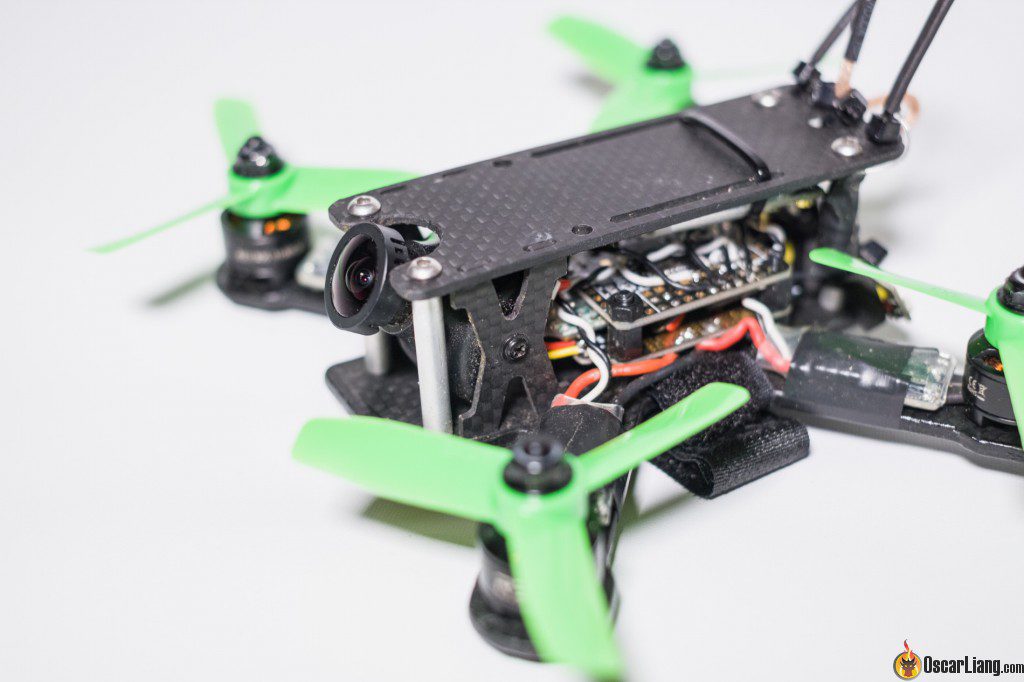 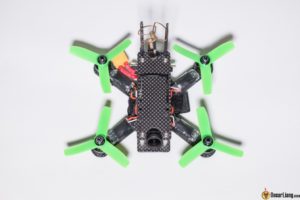 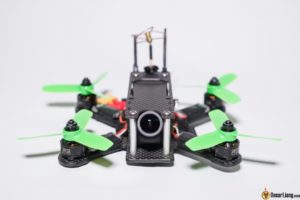 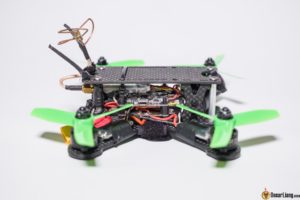 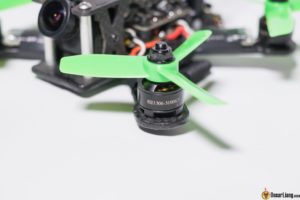 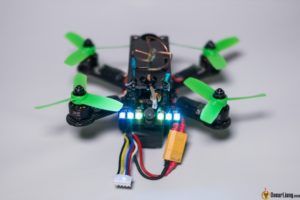 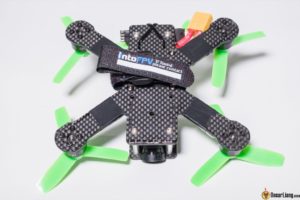 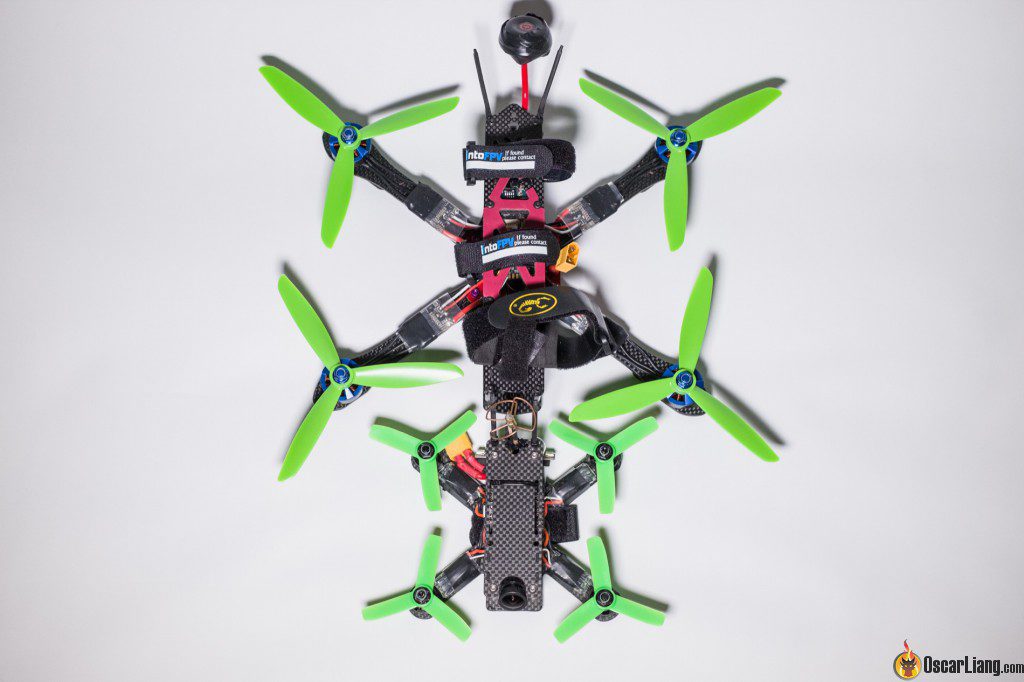 The frame can carry LiPo either on the top or bottom. I prefer to have it  on the bottom because of better weight distribution. 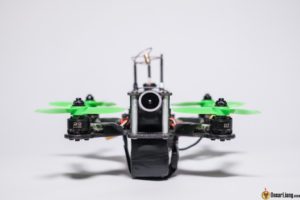 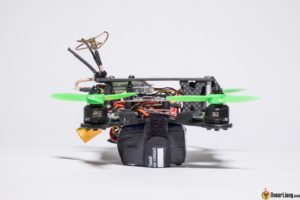 I flashed ESCs with Multishot and Dodo with latest Betaflight 2.9. Default PID didn’t feel very locked in, but after tuning the quad it flies amazingly well. At times I couldn’t believe that I was flying 3″ quad and not a 5″.

It’s best to fly without any HD camera due to the size, but to make the most from both worlds I used 2.1mm lens. It is great for close proximity flying and gives a large field of view. The fish eye effect looks great in DVR footage.

I used 850mah 4S lipo on this quad simply because I’ve already had them around :) They give me around 5-6 minutes of flight time which is great compared to bigger size mini quad. I still need to try out other batteries, but for 4S lipos that are below 1000mah are very hard to get.

I really enjoyed building this tiny quad. It is fun to fly, and it’s a great choice for indoor flying, or extreme close proximity like a swing parks for instance where even 180mm quad feels too big :) 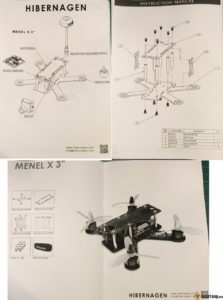 default should work pretty well? stand from there?
if you need help with tuning, please use our forum :) http://intofpv.com/forum-tuning-clinic

Great review, thanks for sharing Artur, Mine should arrive soon…you inspired me..:-)

Thanks : ) You will enjoy this one. It’s a blast. I am still trying to find the best tune for it as well as the best props. So far gem fan two blade or DYS try blade 3040 were the best. HQ durables or DAL tri bullnose turned out to be too much.