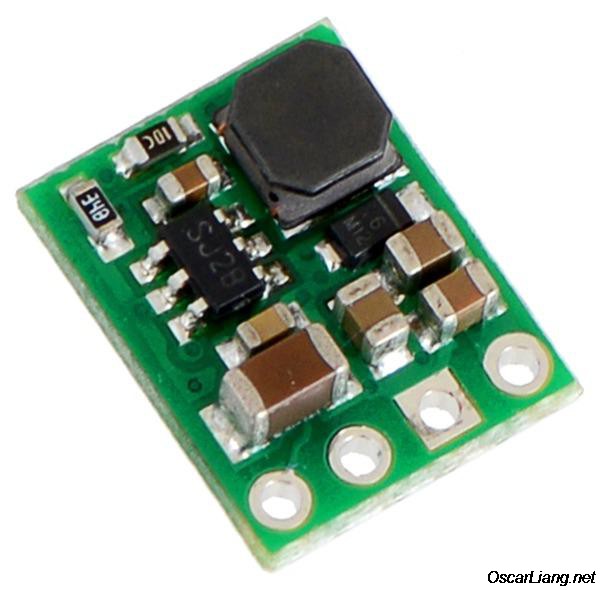 Why use a voltage regulator in a multicopter? Some times you might need to power some part of your quadcopter or tricopter with a specific voltage. For example some cameras require 5V, and 12V power, some video transmitter require 3.3V, 5V, 7V and 12V. To avoid overload your RC plane with many separate batteries of different voltages, many people choose to use a voltage regulator to step down or up the voltage from the main pack. There are mainly two type of voltage regulator available, switching and linear. Each has their cons and pros, here we are going to have a look at them.

A switching voltage regulator works by switching the input voltage on and off to charge an inductor, hence the term switching regulator. With the help of an electrical switch and a controller which regulates the rate between 50K to 100K times a second, depending on the voltage and current needed by the electrical load, the regulator will be turn on for a longer or shorter period of time to let the required energy to pass through.

This is a very efficient way of regulating voltage as the energy losses are relatively small, which can typically have 85% efficiency. But it also emits loads of radio frequency interference. Meaning that it actually acts as a noise generator. It also produces noise in the output voltage also known as ripple. Since their efficiency is less dependent on input voltage, they can power useful loads from higher voltage sources.

A linear regulator works by taking the difference between the input and output voltages and burning of the excess as heat. The larger the difference, the more heat is produced. In most cases, a linear regulator wastes more power stepping down the voltage than it actually ends up delivering to the target device! (meaning the efficiency is lower than 50%)

Although they are inefficient, linear regulators are very popular for low power devices because they are easy to use and cheap. Also linear voltage regulator actually reduces output voltage ripple and doesn’t emit radio frequency interference (not as noisy as switching regulator), so they are popular for powering noise sensitive devices as well.

Which one to use in quadcopter?

It really depends on what you want to do with it. For noise sensitive application, and efficiency is not a big deal (voltage difference between input and output is not large), it’s best to use linear regulator. If efficiency is most important and you don’t care about noise, go for switching regulator.

For example I needed to get a stable 12V for my FPV video transmitter from the 4S main battery in my tricopter. I prefer a linear voltage regulator, because my video transmitters and cameras are all analogue devices, which are very sensitive to voltage supply ripples and noise. And on top of that the radio frequencies emitted by the switching voltage regulator can also reduce the range of the video. As described above, we don’t have this problem by using the linear regulator. 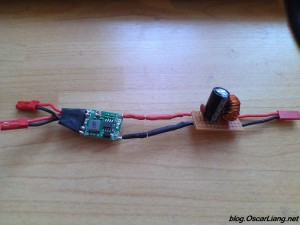 So we now have cleaner power supply from the linear regulator, the trade off is we waste a bit more energy on the conversion, but is it really a big deal? Let’s calculate how much power is wasted in heat. The heat (in watts) can be calculated as (Input voltage – output voltage) x current draw. In my case a fully charged 4S lipo is 16.8V, minus 12V at output, multiplied by 0.2A (the current draw of my video transmitter)

Is that a lot? Let’s take a look what the is power the whole system, which runs on voltage of 16.8V, and the current draw of the system at hover is around 25A. That is

Nearly 1W of wasted heat compared to 420W of the whole system, which is only 0.23%! How would that affect our flight time?

So both linear and switching regulators have their own pro’s and con’s, so why not combine them and have the best of both worlds?

We begin to see more and more PDB and AIO FC to use Cascade Regulator which basically connects a linear regulator after a switching regulator.

Quick question, i am looking to build my first 250 FPV quadcopter with quality race parts.

Do they typically need a voltage regulator or not? Every website that lists parts needed to build a quadcopter does not mention this and it is really bugging me. If it is optional then how do i know that i will need it right off the bat?

I am looking at this flight controller

These filter things are really really confusing me, I’d really appreciate the help.

a lot of power distribution boards (PDB) has integrated voltage regulators (giving 5V and 12V from 4S/3S batteries), as well as LC filters that smooth out the voltage outputs.

when you see they say “5V” or “12V” output, that means they have voltage regulators integrated.

the RC filter is not the same thing, that is to use convert PWM RSSI signal to analog signal… just don’t worry about it it’s pretty much irrelevant :)

But when they say “filtered voltage output” that mean they have some sort of LC filter built-in.