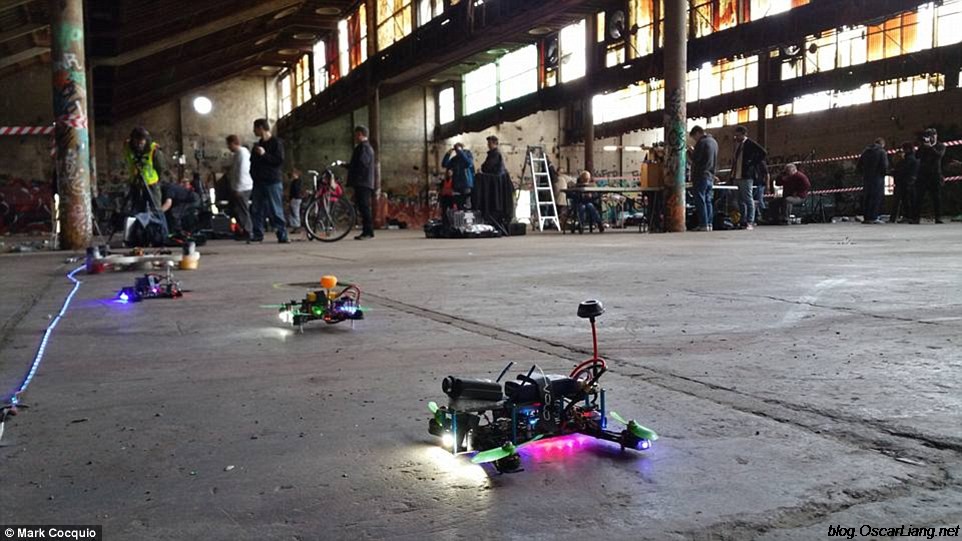 In this post, we will talk about how we learned from extensive testing and meet-up races, to setup and manage 5.8GHz VTX and channels for drone racing, making it possible to allow up to 8 people flying at the same time.

This article is written by Matthew from KQRC (Kent Quadcopter Racing Club). Edited by Oscar.

All the research has been done and tested over a few months at KQRC and we have had great results but there has been some learning curves. Please note that I will not touch on the legals of FPV as this is still very much a grey area. It should be noted that 25mW is the permitted power in the UK currently.

What is FPV Racing

FPV Racing (First Person View) is the racing between RC Models, the norm is multirotor or more commonly quadcopter (stop calling them drones LOL). There are a camera and a video link back to your screen or goggles (FPV glasses), so you have a live video feed into your goggles that you fly from.

Why is VTX Channel Management So Important

So why is video transmitter (VTX) such a big thing? Well, if you can’t see then you can’t fly. Even though there are some 32 channels (even 40 channels now with race band) still are not that rosy.

To organise a smooth FPV event or FPV race, you need to consider the following regarding FPV system especially video transmitters:

Here is an example of 3 VTX’s of the same brand make but different output power.

And depending on who has the most Powerful VTX, it can be a real problem as a 600mW will blat out a 25mW when only frequency separation is 20Mhz apart.

For most outdoor races, max 200mW should be allowed, and for indoor flying 25mW would be enough.

We explained how VTX power affects range and interference.

For example here you can’t use band 1 CH1 with band 1 CH2 together in this chart. The frequency spacing is only 20Mhz and it’s just not enough. The two channels will bleed in to each other, causing frosting (snow) and Ghosting (the other person’s video) in your video feed.

Race band was designed to allow 8 pilots to fly at the same time using all 8 channels. But the channels are spaced at only 35Mhz, and we have had mixed results with this. So we moved to 40Mhz spacings and filtered out a great chart that works for most.

You also need to take into account IMD (Inter-modulation distortion) when picking a set of frequencies. We discussed more on how to choose the best FPV channels in this guide.

There are LHCP and RHCP antennas, utilizing both antennas can give even better result.

We ran a test when we alternate the LHCP and RHCP antennas on 25mW VTX we also have had great results. It is my understanding that a LHCP signal hits the ground or a object it becomes a RHCP signal, but when it does not bounce it stays the same.

Now by using a 25mw VTX the signal is weaker so less signal reflection, meaning less interference on the channels near by.

Group people to race together depends on their equipment and what channel they support. 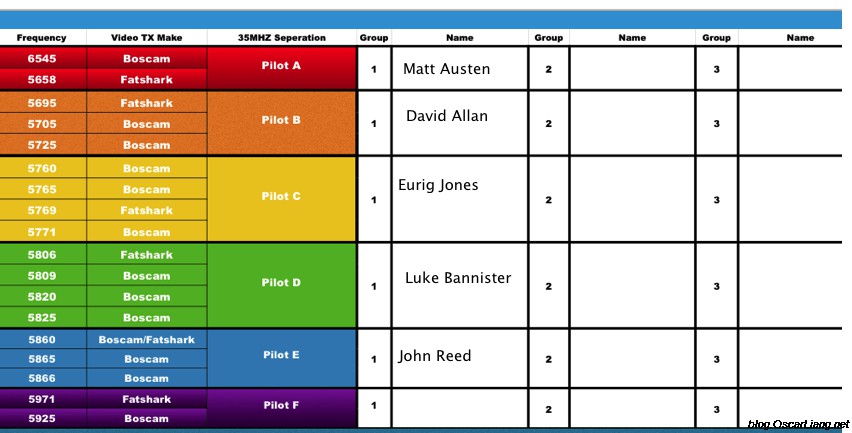 The chart above was a original chart I used for the Boscam FatShark Channels. I took all the available channels and one by one worked out the most suitable frequency, and I also only wanted 4 FatShark and 4 Boscam at 40MHz spacing. By doing so we could maximise the number of racers to 8 and still keep a clean channel for all to race on.

However we had issue with cross interference when using the top and bottom channels such as where a blue meets 5771 to 5860 for example. So I set out the spacing as best at 40Mhz and this worked great.

Here is an improved version of the chart, we can see some channels I have red filled, which people are unable to use due to equipment limitations.

So as you can see I have 7 racers but 1 can only use 4 of the channels and 1 can use 6. So I start assigning channels based on this.

This filtering goes on until we make a good VTX race team system, I wont even start on groupings just yet.

The best way is for everyone to have a set of LH and RH antennas. Also limit VTX power to 25mW if you are flying indoor, to prevent multi-path signal issues. We use a VTX scanner that shows who is on what channel and what power VXT they are using.

As you can see I didn’t even use any Raceband channels in order to run an 8-people race, so is Raceband worth the cost to switch to?

Race band is a relatively new thing released in 2015, and basically it’s made of 8 channels spaced at exactly 35MHz apart. While it has the widest and most consistent separation in all the bands, however, I don’t think the 35Mhz channel spacing is enough. You will still get some interference when running neighbouring channels at the same time (e.g. ch1 with ch2). I think at least 40Mhz separation is needed, so you will be most likely using channels from different bands anyway when running a group.

I have a question around 5.8 ghz frequency.

What about Fr6? I love your chart so far, it cleared up a ton of confusion but what is the name for Fr6?

Also is Fatshark band aka F, and Raceband aka R?

i am not sure i know what Fr6 is… where did you get that name from?

Hi Oscar i like your article on the fpv and i got some question me and my friends want to make fpv racing cars at my garage do you think 5.8ghz fpv equipment will work fine since we are about 9 cars﻿

Part of the RaceBand idea was to be in compliance with regulations. The allowable range for ITU region 2 (US) is 5.650-5.925 GHz which is why RaceBand starts at 5.658 and ends at 5.917. If you add, or subtract the 8MHz video bandwidth you’ll arrive at the legal limits for the band. We are trying to promote the hobby as legal and safe, so we should stay within the regulations in regard to our frequencies. Also, please get a Ham license if using more than 25mW.

that’s interesting to know, thanks!

We have implemented this to great success in our races.

We made a demo, seen here:
youtu.be/axWXu8ih8Oc

very interesting theory, i will look into that thank you Jonathan!

We did a similar exercise on allocating frequency slots based on 40Mhz separation and the best we can managed was only 4 fliers flying at the same time. Like Vevendis, we did a frequency scan using RX5808 pro and found that most Tx spew another medium strength frequency together with it’s intended frequency. I got a feeling that certain Tx are ‘cleaner’ than others and a review on this topic would be great.

I really like this idea of reviewing / testing if some Vtx are ‘cleaner’ than others.

I made the page http://miniquad.dk/fpv.html as a visual aid for explaining how all this works and how the bands and channels are located in relation to each other. It also shows the 37mhz-range a person uses when tuned on to a specific frequency. Displaying the “width” or occupied frequency range of a channel is usually what makes people say “ahhh.. NOW I get it!” as this helps the understanding of the 8-flyers limit across several hundred mhz.

But the link seems to be dead ?
Is someone out there, that has another link ?
Or the same info somewhere ?

Hi Oscar, What are your thought about my local team switching from 200 to 25mW is it worth it?

if you fly indoor, then it’s definitely worth it, for outdoor 200mW is probably better

Good article. One thing to add. Most VTXes, when set to a band at the low (e.g. 5740) or high (e.g. 5925) extremes of the 5.8 spectrum, ALSO transmit a medium strength signal at the other end of the spectrum. So far we have tested 200mw versions of popular VTXs (FX799t and the various versions of it under different brands, TS5823, Immersionrc units) and they all exhibit similar behaviour on basic scanners. At first we though the scanner was just seeing spurs that don’t really exist, until we see the signal in the goggles as well.

Having said that at our local race club we also decided that spending 15 minutes or so before a meet to use a frequency scanner to see what folks are actually TRANSMITTING is a good investment of time.

Levendis I think you may be describing what I thought was an odd and illogical event I have seen a few times – when people are at opposite ends of the freq spectrums – yet seem to have interference with eachother. I commonly place myself at the highest freq possible 5945 yet could have someone at the bottom interfering…I think perhaps for this reason those regions aren’t as great as you might think…

good points! what frequency scanners are you guys using?

I’ve also noticed using the boundaries of the the 5.8 spectrum other pilots see my image ghosting through theirs.
What Frequency Scanners are you using? And are you also able to measure output power ?