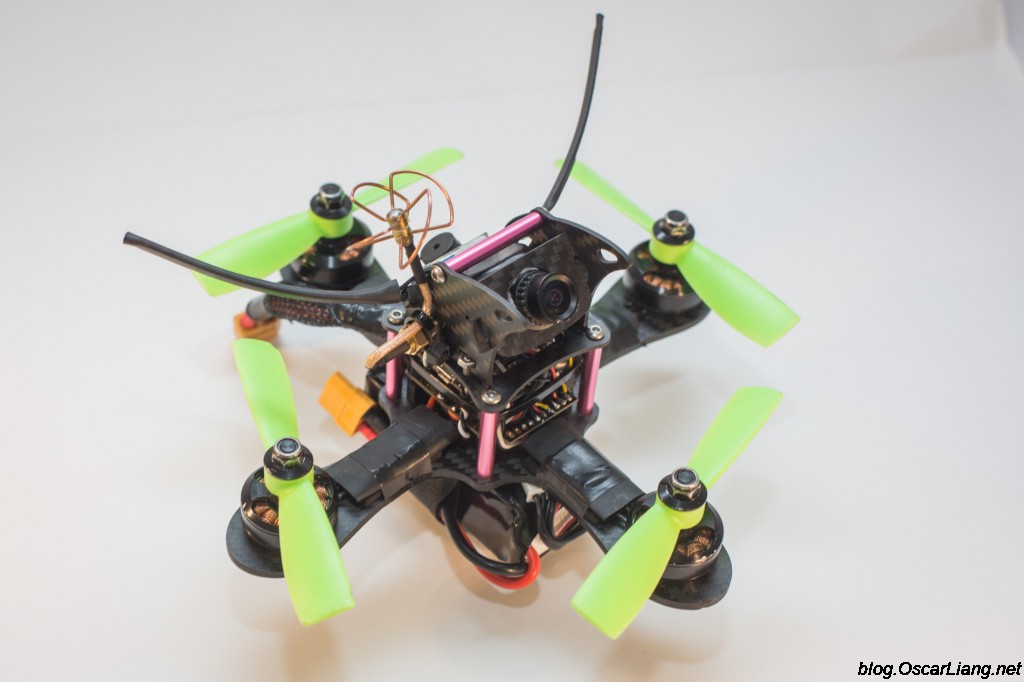 Get ready for the Mitsuko 150 Frame! Unlike most of current mini quad frames that have X configuration, the Mitsuko is a plus + frame. It’s as tiny as a 150mm frame but capable of running 4 inch propellers.

The creator of Mitsuko 150 frame, Andy Shen, is one of the very few mini quad frame designers that can constantly come up with unique designs. Many of us are probably familiar with his other famous products including the Krieger and Tweaker (which we will be reviewing soon too shortly after). He also writes a very interesting blog with quality images, explaining in detail about his designs and concepts.

Get your Mitsuko 150 from ShenDrones and don’t forget to check out Andy’s blog too. 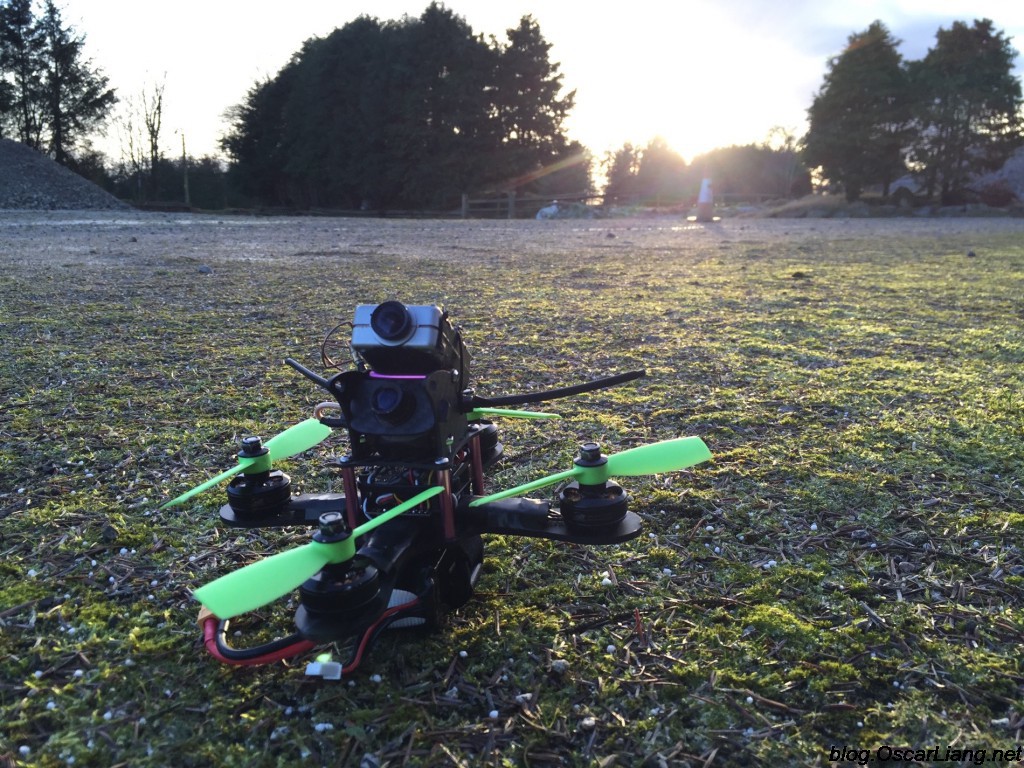 Mitsuko is a 150mm frame that has a plus (+) configuration. Frame kit contains: 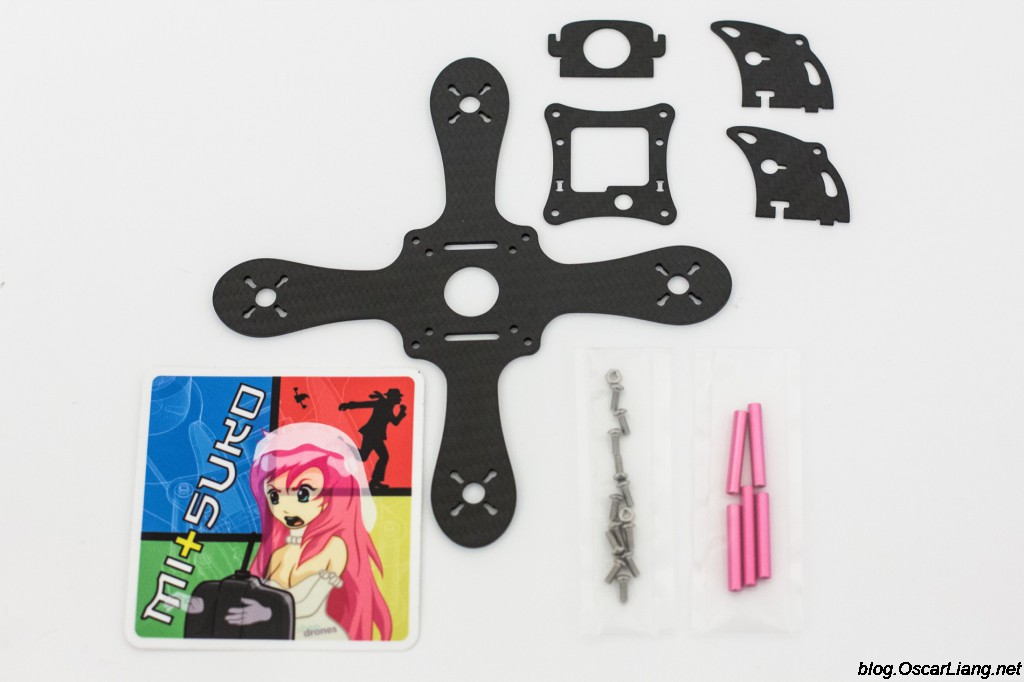 Frame design is simple, minimalistic I would say. Single 3mm bottom plate with a circle cut-out in the middle and two slots for the battery strap. 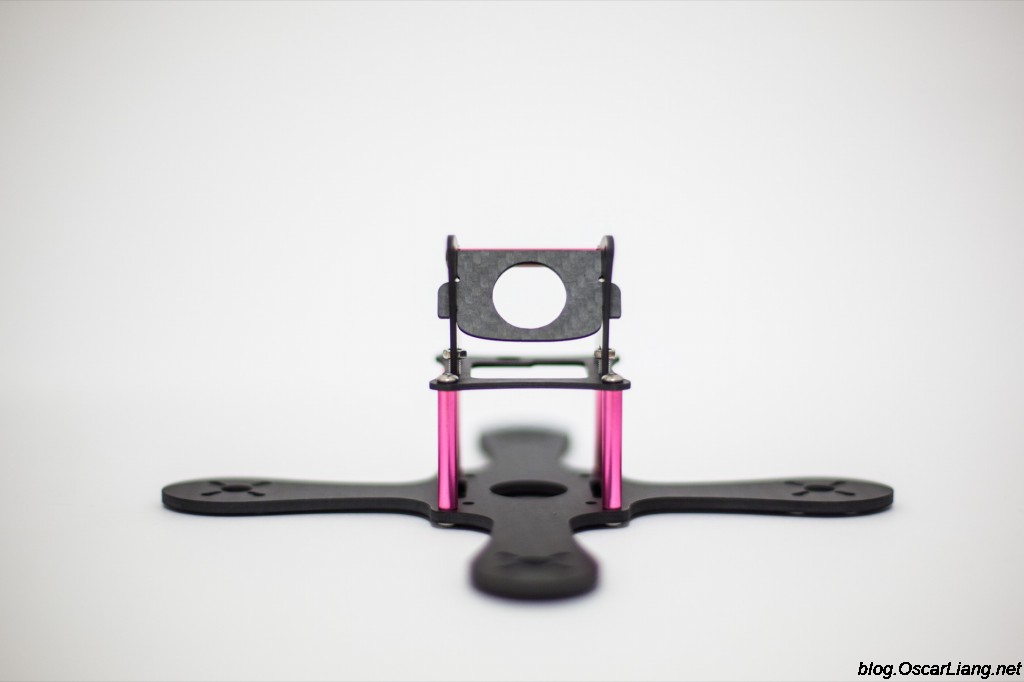 All electronics must be fitted in the little cube space between top and bottom plates which is only about 46x46mm. On top of the frame you will see an very interesting construction, which is designed to hold FPV cam in place. Camera plate design allows the tilt angle to be adjusted freely. 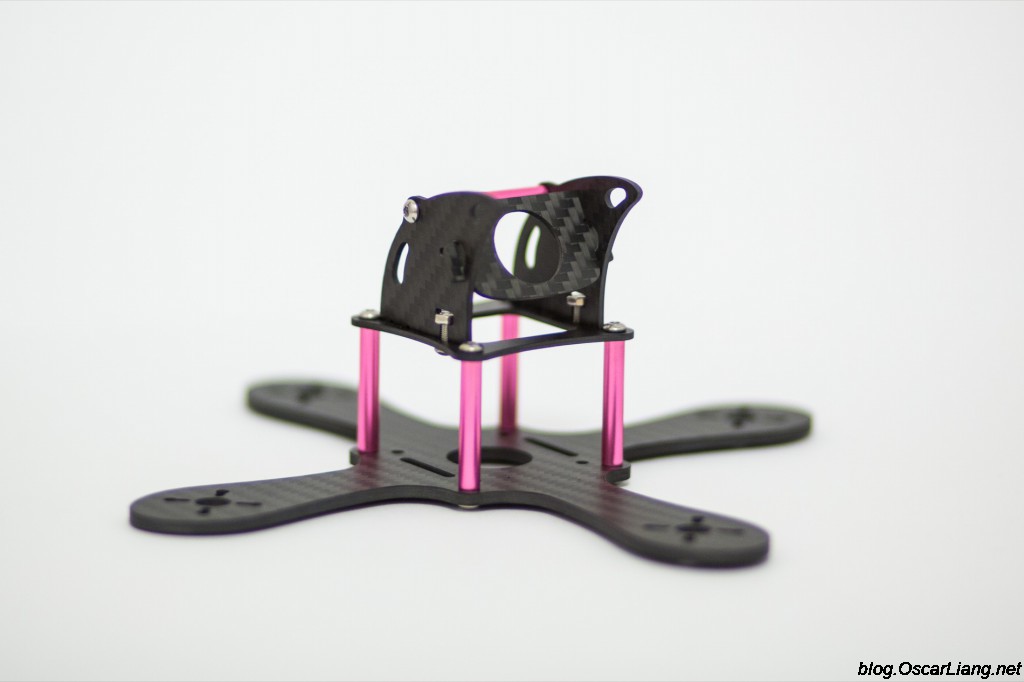 It is capable of running 4″ props on a frame that has a motor-to-motor distance of 150mm, which is very impressive given the small form factor. Andy Shen explained the process of design in this article. 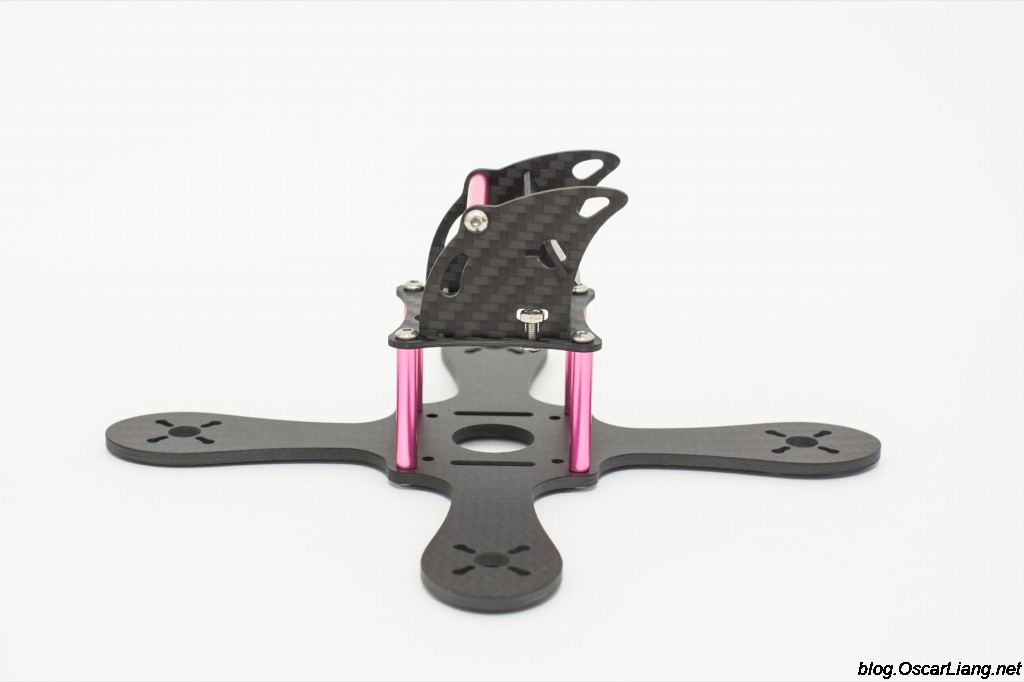 The build began from the top of the craft – the FPV setup :) 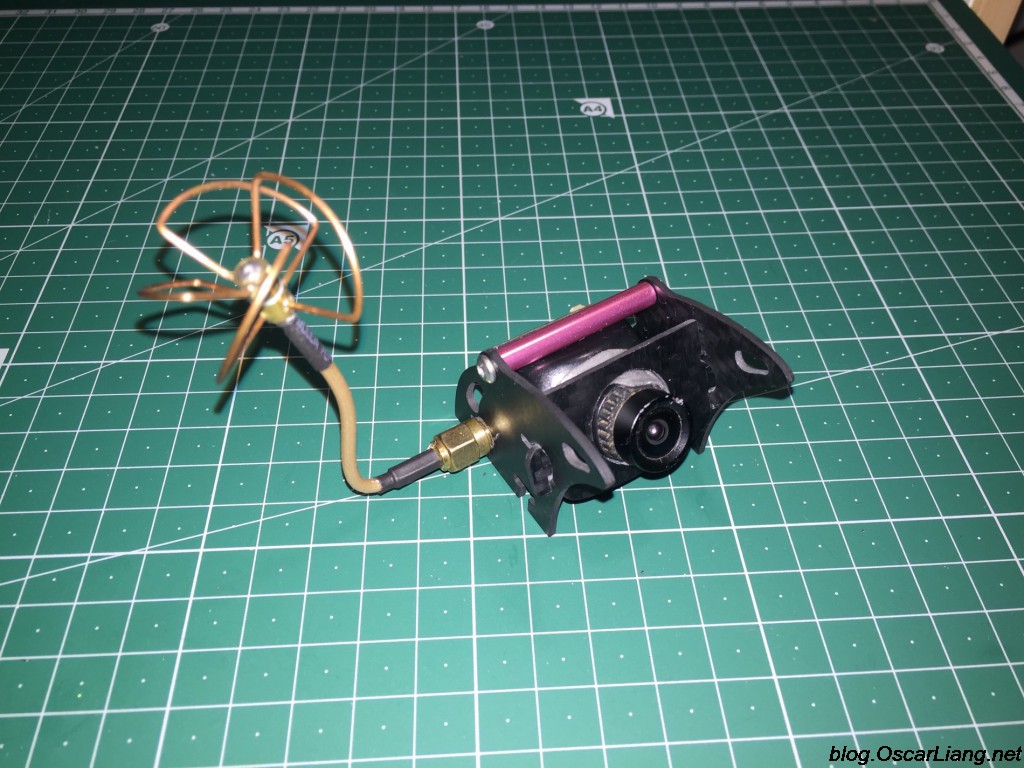 According to information on ShenDrones’ blog, the frame is designed for a specific VTX (e.g. the FX799T and similar) that has a 90 degree SMA antenna connector, so it can be fitted to the top plate via dedicated cut-out. This VTX isn’t available to me when building the Mitsuko, so I had to improvise and used the Aomway in there instead.

I tried different configurations, using the current hole for mounting VTX and the only option was to drill the hole in the side plate to get the VTX through.

Also used the cheap VTX antenna because its flexibility vs. FatShark spironet that I normally use on other quads. 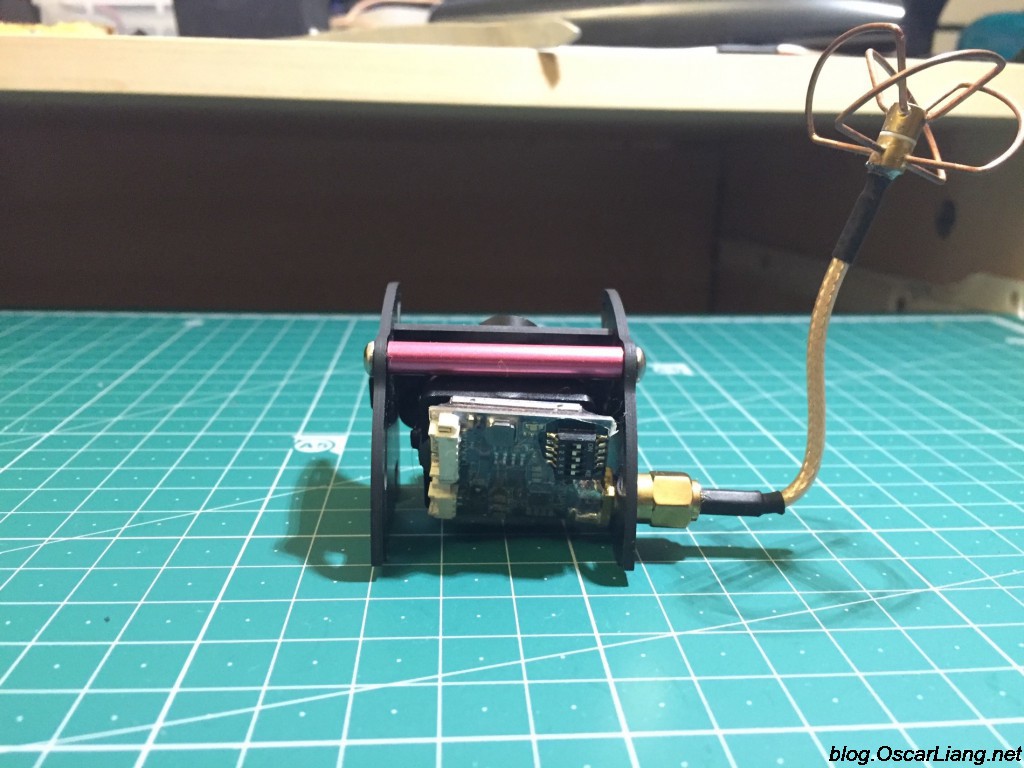 FPV cam is held securely by double sided tape on the VTX, which pushes it against the camera plate. This doesn’t seem to be a proper way of mounting the FPV camera nor have any assembly instructions, so this is complete improvisation. Not very beginner friendly at all.

In the end my mod appeared to be working pretty well, it also saves space underneath the top plate – all video components are located above it. Pre-drilled SMA hole in the top plate was used to put the buzzer through it.

When mounting motors on the frame it turned out that I couldn’t screw in all four bolts, due to design of the motor mount holes. The only option was to use only two bolts, to avoid doing any extra drilling. 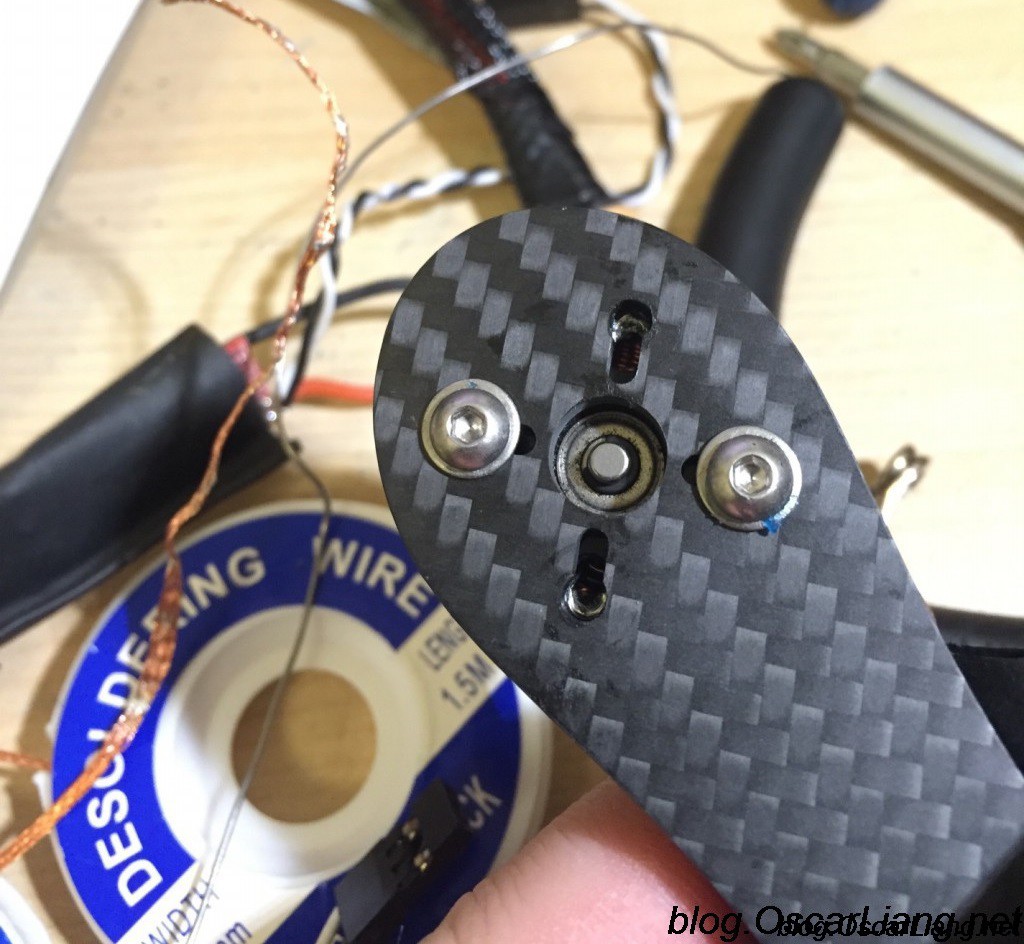 After motors were mounted on, I put the ESCs on and cut the cables as short as possible. I trimmed off all servo plugs to save weight, because I wanted to solder motor signals and grounds directly to the flight controller. 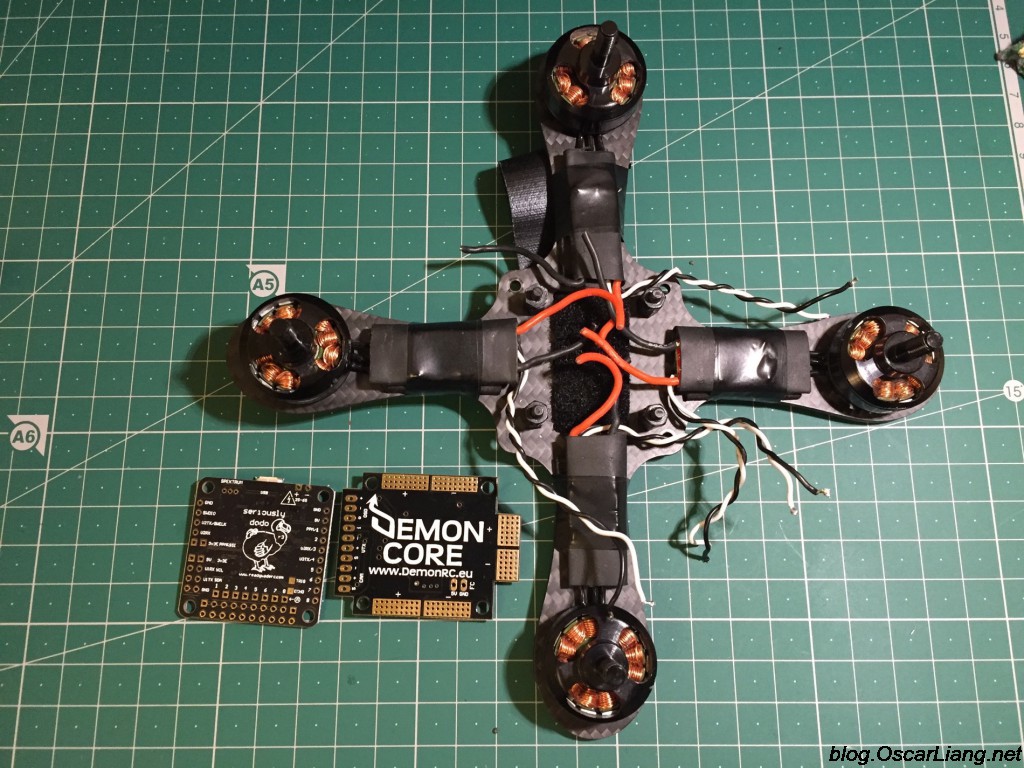 PDB is mounted upside down so the regulators and LC filters are clear from the top, leaving me more space to work with cables going into FC later. 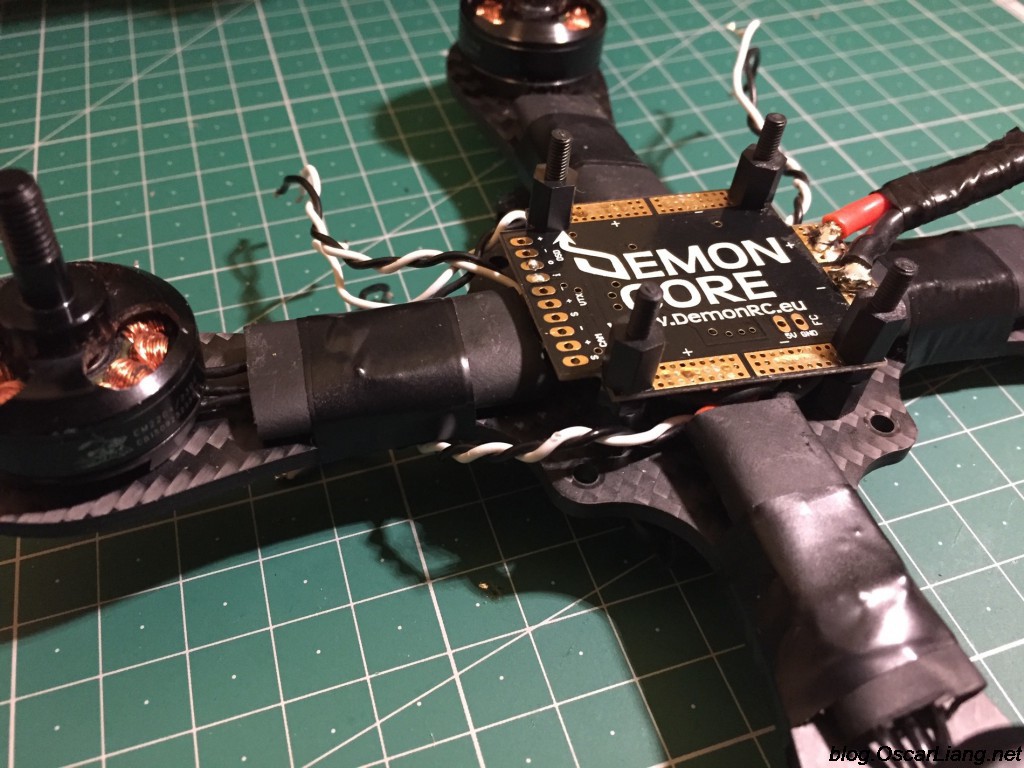 I prepared the Dodo flight controller and stripped D4R-II receiver to the bone for space saving. All pins were removed from it and I did a direct soldering to the Dodo. Wrapped the RX with electrical tape so it stays safe when it’s sandwiched between PDB and Dodo 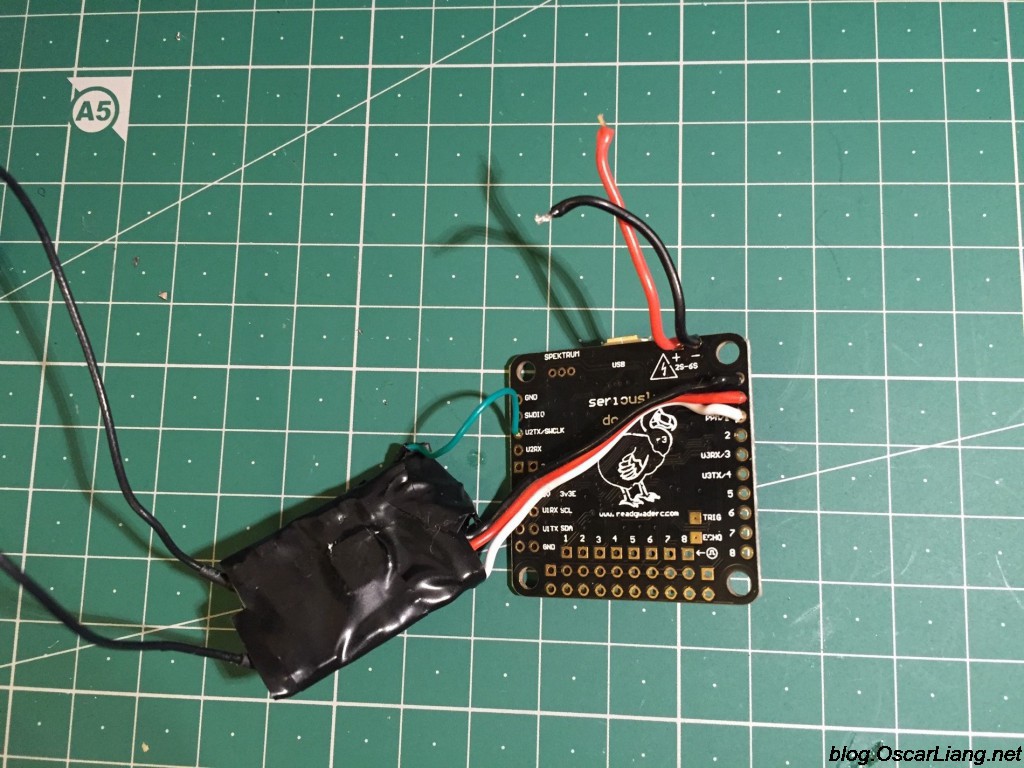 Dodo FC and D4R-II RX were installed on above the PDB and signal/ground cables from ESC were soldered directly to FC. 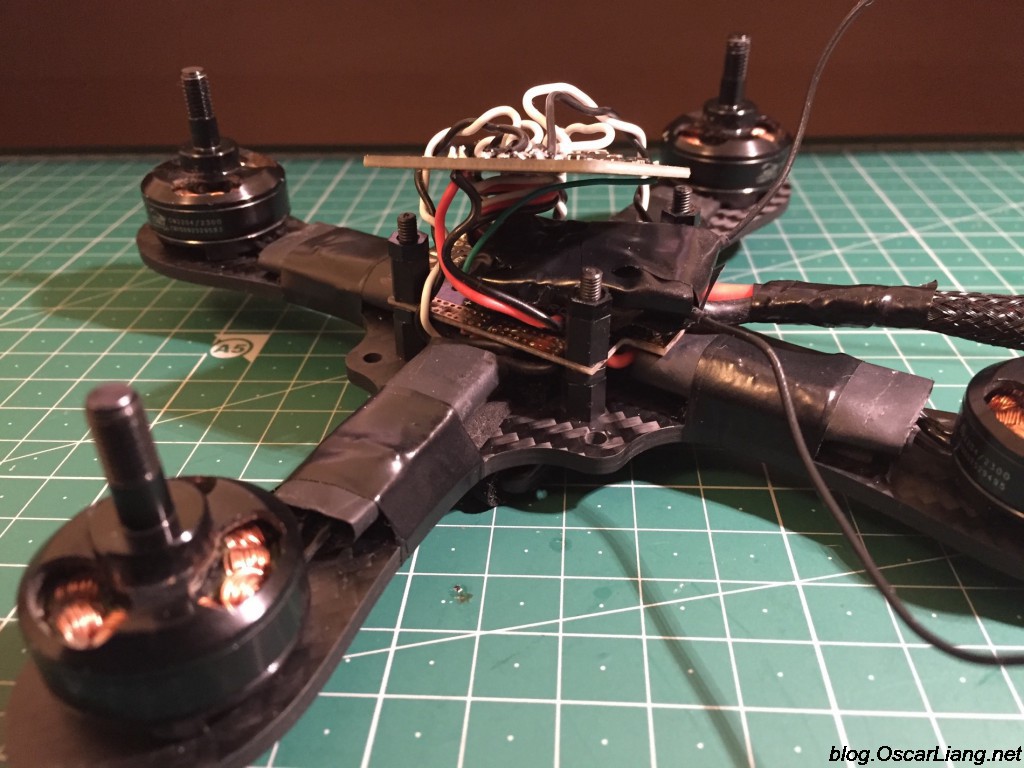 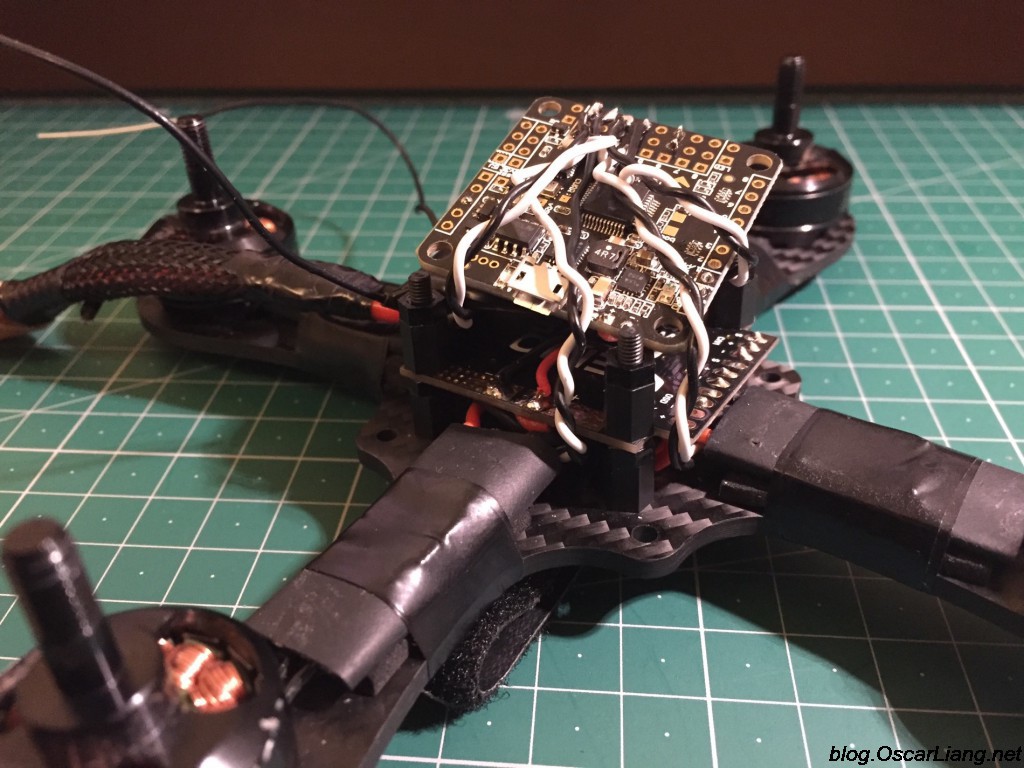 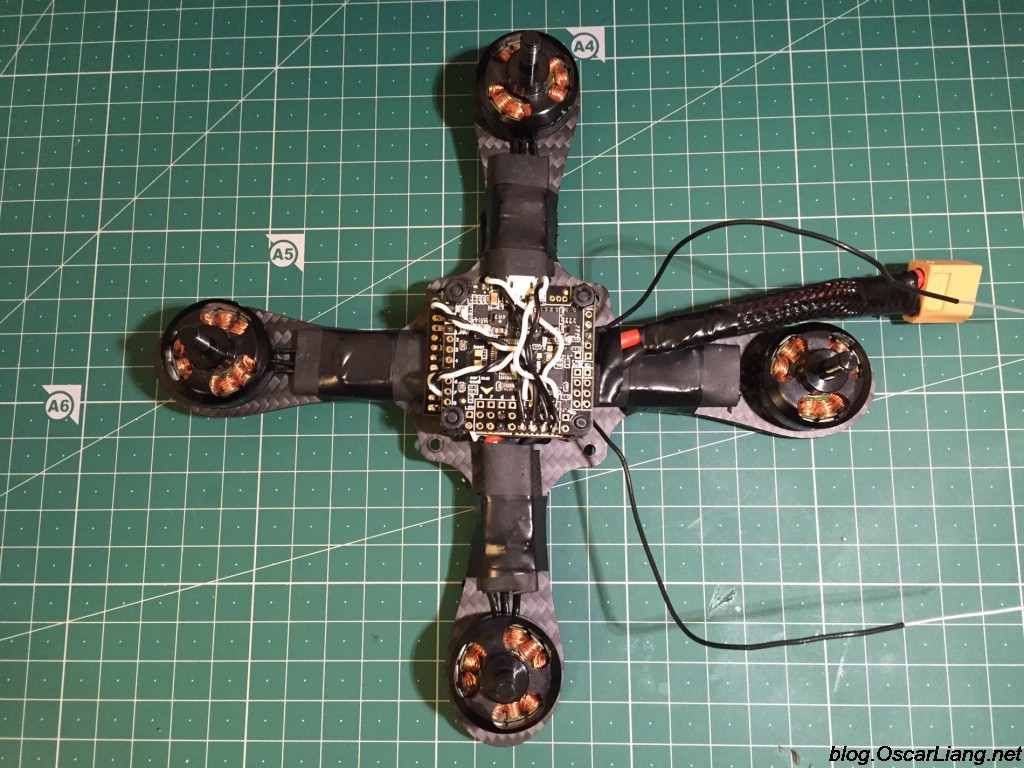 Before connecting the top frame section with the rest, I soldered the cables for VTX and CAM on PDB 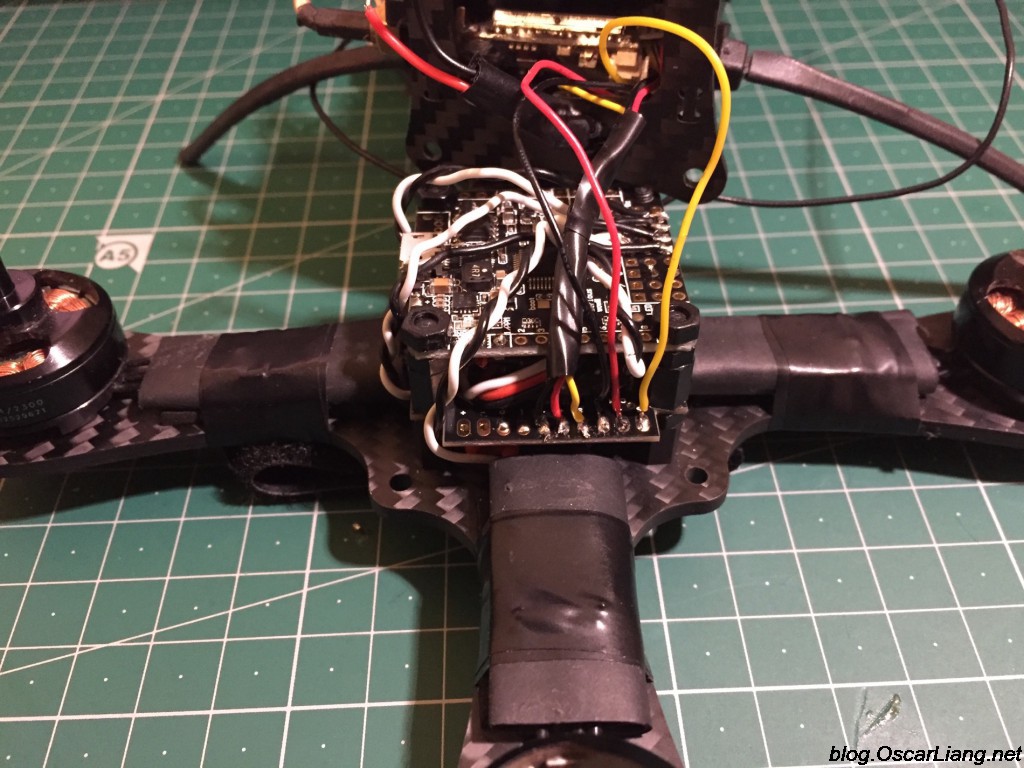 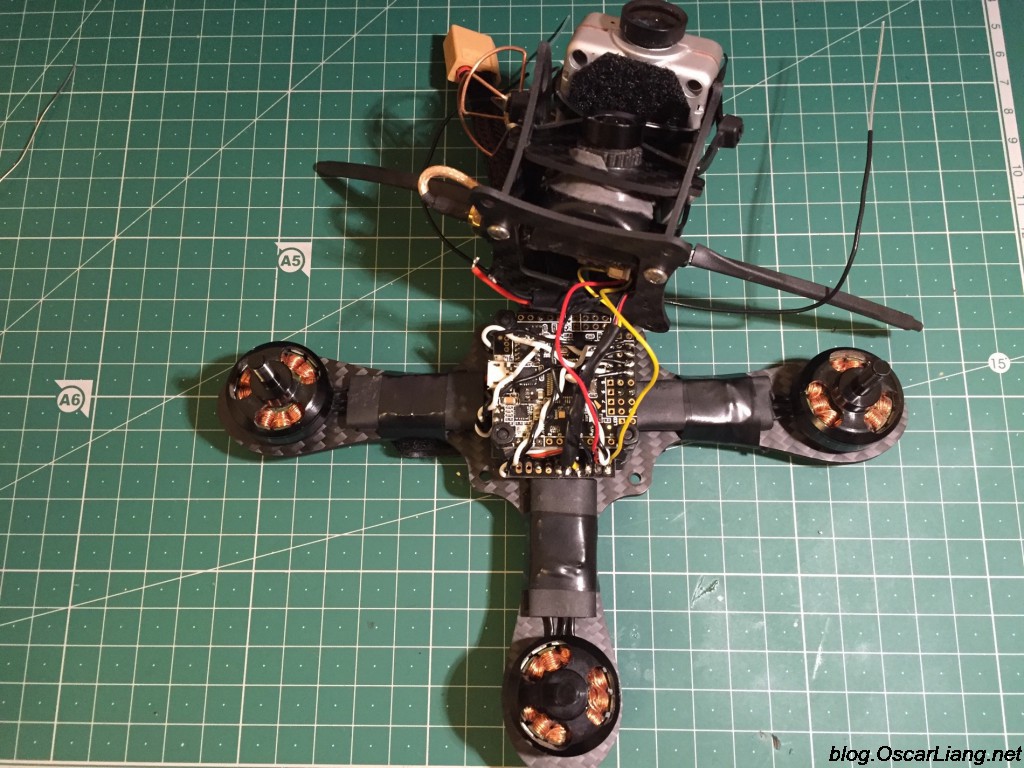 Installing RunCam on the top for recording HD video using only zip ties. 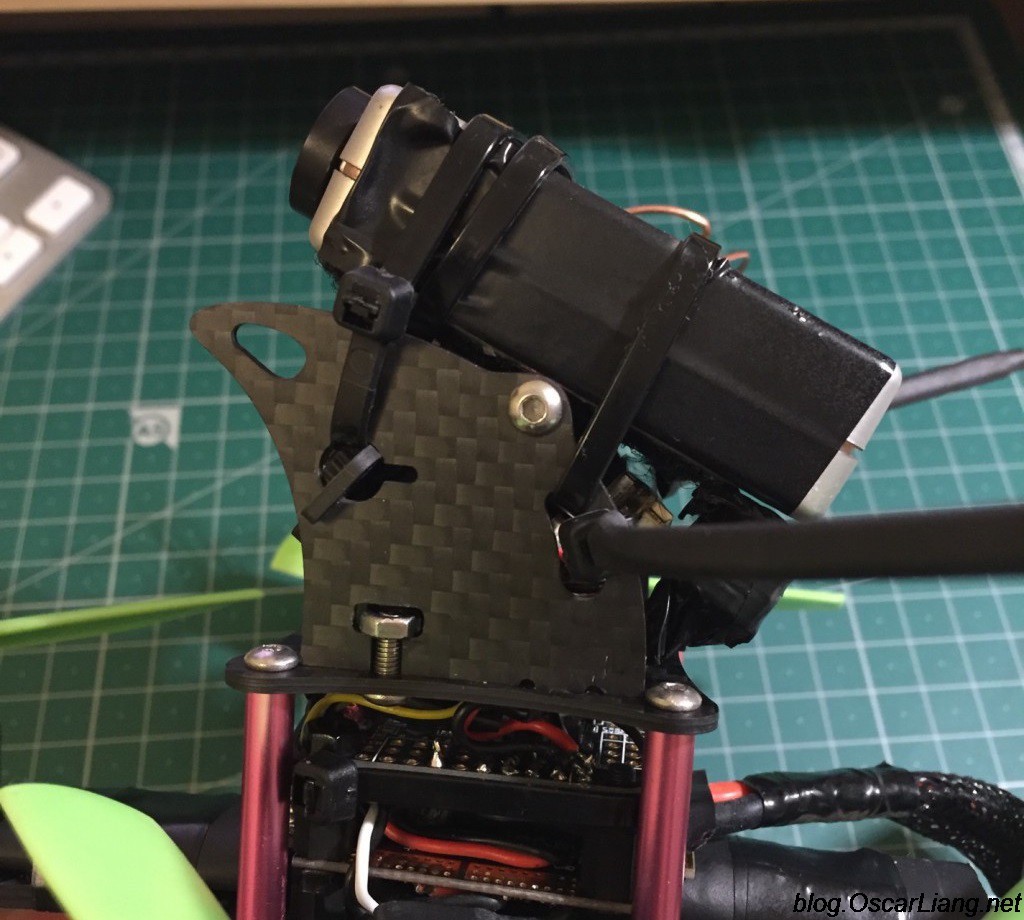 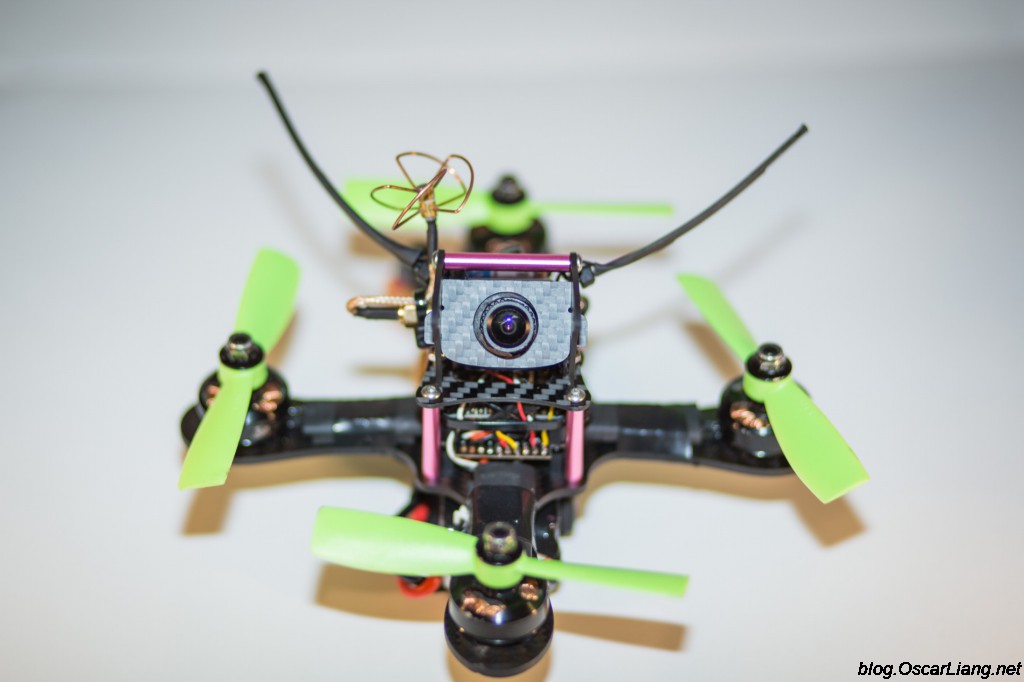 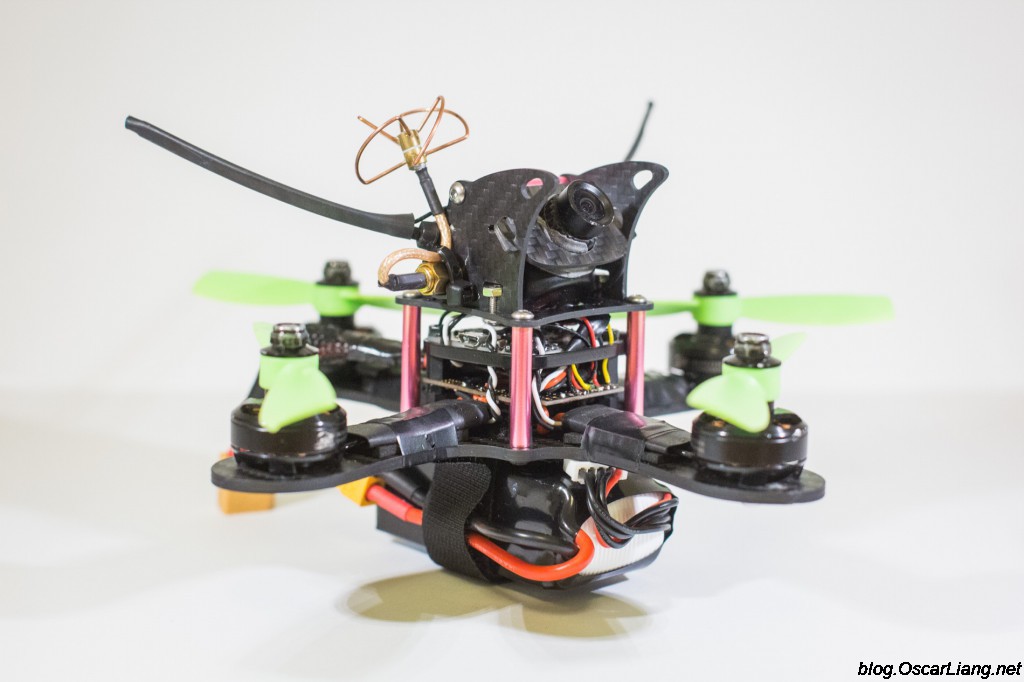 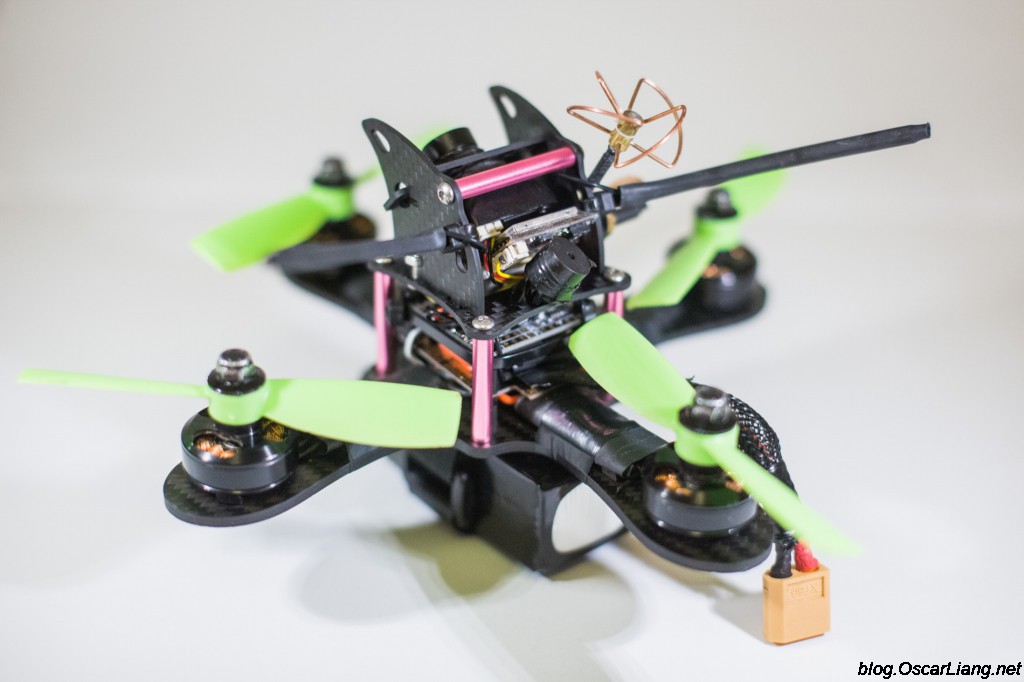 This is a PLUS configuration so yaw adjustment needs to be change to compensate for it. I used betaflight on this build, default PID was causing terrible vibrations. Even just hovering the motors were getting terribly warm. Also tried cleanflight 1.11 and motors were still getting hot easily and oscillations were visible.

I dropped all P, I and D values down. Started with P at 2.0 on Pitch and Roll and 3.0 on YAW slowly going up. Motors stopped being hot with P @ Pitch and roll on value 3.0 and Yaw at 4.0. After few initial tuning sessions I found that P need to be raised only few points up to get quad behaving even smoother. Another hover test in the house and all looked smooth (finally).

First flight outside was quite promising with straight lines, but the quad behaved strangely on ROLL and YAW which was very unstable. I found it very strange because I had never encountered such behaviour on any previous builds, regardless how many times I tried to tune it.

This is the best result I could get from the Mitsuko build for now. Still not sure whether all that uncontrollable movements come from the plus configuration design or not, and if that can be fixed.

Things to improve on Mitsuko

This is a very special build for me, I like unique design and plus configuration. I hope that the more time I spend with Mitsuko the better I know it and hopefully will tune it properly.

At this stage it is just for fun flying. Every other pilots in my local flying group find my little Mitsuko amusing. 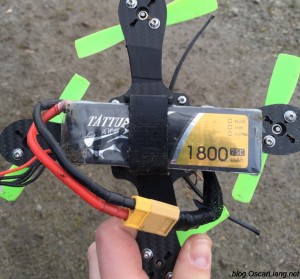 My build flew perfectly, this thing is incredibly fast, stable, and agile! Setup below;

Hi Oscar, I am building a mitsuko with very similar components to what you have used.

I have a question regarding the nano tech 4s 850mah battery, what is the c rating? I am tossing up between the 25-50c version and the 45-90c version.

Go for 45-90C :) you need that extra discharge current

Hi Oscar, what props are you using?

Hi Oscar, thanks for the review.

The motor mount pattern is a compromise that allows the use of 1800 and 2200 motors. With care and loctite 2 motor screws is not a problem, a lot of my friends use 2 by default.

I apologize for the lack of a tune guide. PID values have to be very low since mass is very centralized. The motors are as tight as possible, which further reduces rotational inertia. Roll, pitch, and yaw P all have to be reduced significantly.

I didn’t experience any tuning issues back when I was developing it, but I just built two new ones and I am seeing some of the twitchiness you’re describing, but no strange roll or yaw behaviors. I’m going to do more tuning and report back.

Hi Andy, thanks for your responsiveness and commitment to the community. Mitsuko was a special build for me which pushed my technical skills. But with its flight behaviour, I thought that I did something wrong -.-
Hope to hear of your findings. I’ll keep testing too :)

P. S You make great quads. Got a Krieger & Tweaked too. They are awesome!

thank you Andy :)
it would be good to share info on how differently we tune a plus quad and a X quad :)
Still, loving the compactness :)
have you also tried doing it X instead of + see if it flies better?

No strange flight characteristics, it just takes more time to refine prop wash shakes ’cause it’s so light, compact, and powerful. Will report back after more testing.

I did + and x in 5″, didn’t feel much difference but didn’t take the + too far because the x was far more elegant in the 5″ size.

Tried Betaflight today, 2.3.3. On stock PC1 pids the motors definitely sounded unhappy. Dropped P down to 2.6 for roll and pitch, 4.5 for yaw, didn’t mess with the other numbers. Gyro LPF was off. Could probably raise the P a bit all around but it flew just fine, totally predictable with just a tiny bit of prop wash jitters.

Pardon the lame piloting, new spot with terrible reception, as you can see.

thank you Andy! the flight video is great! I think the quad just takes time to tune that’s all! it should fly as well as a X quad.
It appears that the PID values are much lower on this frame I found :) but still flies pretty well :)

Hi Oscar
Great build log. I had a blast building mine too. Up until tuning. I had to start from scratch using betaflight 2.3.4, and work my way up. Ended up wif P&R 2/0/1, Y 3/0/1.
But very “twitchy”. I can’t understand why. I guess its something to do with the concentrated centre mass and how every movement is amplified coz the weight/motor rev/prop size/plus configuration just translates into exaggerated moments.
I’m gonna try with triprops on my 2600kv motors, see if it’s more stable.

Hi, Oscar,
Fun and interesting…
Nice job as well to fit everything in this lil cube.
When you look at it, you’re not surprised it’s unstable… it looks like a big-big-mac :)

Anyways, I enjoy this kind of article with text and pictures… it’s more helpful than videos ;)