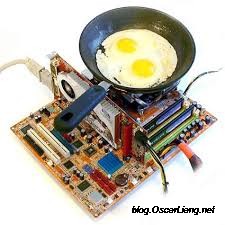 Type OverClock in Google, you will get this clear definition:

run (the processor of one’s computer) at a speed higher than that intended by the manufacturers.

By either hardware or software means, you can set your CPU and memory to run at the speed faster than specified. But when overclocking is done inappropriately, it might result in damage to your hardware due to overheat or other reasons. Therefore if you do OC, you are doing it at your own risk, and it’s going to void your warranty.

In this post I will talk what I personally think about overclocking, should we do it, and what are the ways doing it.

There are a lot of information on the internet about overclocking, but often they are not proper overclocking, which requires a huge amount of time to do. Effective overclocking is not flip of a switch. IMO, it is done safely (NOT USING SOFTWARE made by mobo manufacturers or anyone else), with considerable time and patience.

You will need to read a lot of documentations to understand what the safe condition is for your hardware, and it’s not just a few buttons clicks and it’s expected to work. Many OC guru are still tinkering with their build from a few years ago to find the most stable and maximized OC the entire time.

There are tons of tutorials and options when it comes to overclocking and everyone will do it differently. But I always bear in mind this so I know it will continue to work, for a very long time is: don’t ever go outside the limit of what the manufacturer suggests.

However do understand that overclocking isn’t for everyone. For example if you are a gamer and only looking for more FPS in games, you would be probably better of spending the extra money on over-clockable CPU/Mobo on a better graphics card. But if you are only looking for making the most out of your system, and can afford the extra cost, do it! It can give you a few more years of life for a properly OC computer (by adding 20% to 40% performance by OC).

Overclocking is now easier than ever, most stuff can be done on the graphics interface in BIOS. The reason Software overclocking is bad, is that it usually pumps more voltage than needed to achieve the overclock, and it often shortens the life of the chip. A properly done manual overclock will be safer and ensure the chip last longer, be more stable and ultimately most likely to deliver better performance.

Many motherboards are designed for over-clocking, and thus should give you full access to the overclocking controls. Check your computer’s documentation to determine your motherboard’s capabilities. For example, the “K” line of Intel i5s are designed specifically to be overclocked (e.g. Intel i5-4690K).

Before overclocking, it’s a good idea to run a baseline stress test using current settings (or original settings). This will give you a baseline to compare against with as you overclock. If your system is crashing during the baseline stress test, then there is likely an issue with the hardware that needs to be addressed first.

During OC, there are three simple things I always keep in mind:

The three major ways of OC.

The base clock speed, also referred to as front side bus or bus speed, is the base speed of your processor. It is typically a lower speed that is multiplied to reach the total core speed. For example, if the base clock is 100 MHz, and the multiplier is 16, the clock speed is 1.6 GHz.