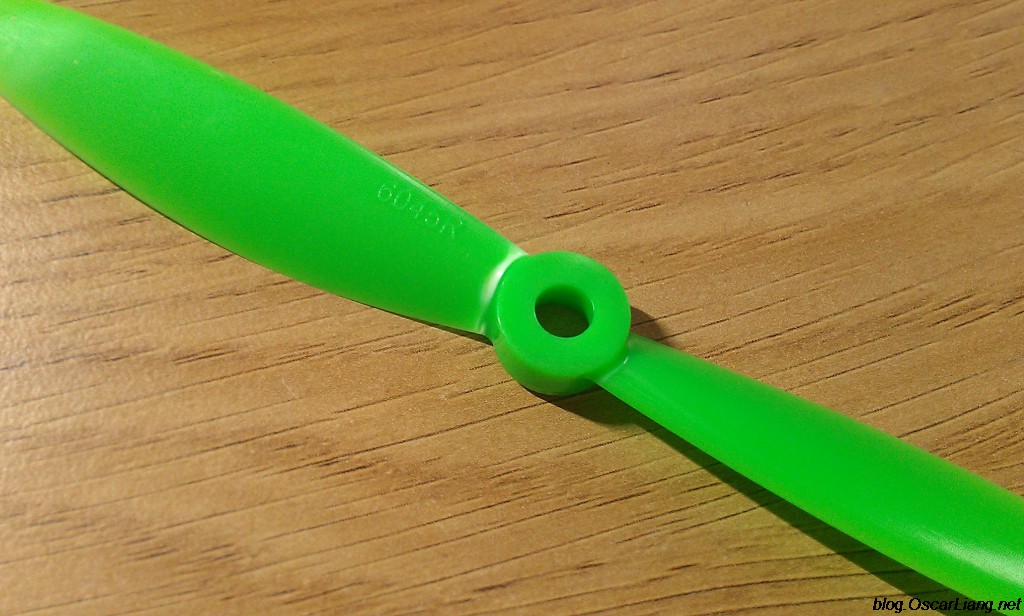 In a quadcopter crash, your propellers could be bent. As a result there might appear white crease lines around the prop hub. It might look like you can just bend it back because it wasn’t totally snapped. My advice is, Replace that propeller !

Props with the white line can potentially break apart at any time in the air. Especially so when you are flying at high throttle, which puts tremendous amount of pressure on the damaged prop, they could just snap mid air when your quadcopter is travelling at high speed.

This has happened to me twice now, the first time I broken an arm on my plastic FPV250, as it just flipped over and I lost control. The second time I managed to still control it and land it, while it’s rotating around yaw axis involuntarily like a helicopter lost its tail rotor. I was pretty impressed by myself as I was able to fly a quad with 3 and a half props :D but it could have been much worse since I doing punch out.

Here is an example, you could already hear the rattling sound from the bent prop.

Hi i recenly tried out crash flip on my 2in quad. It eventually bend my pro tips not the hub. It kinda softened the end and one prop lost a small piece. I flew with it shows no issue while flying so far. Should i change props. Actually i hate changing props cuz i have ripped motor holes while screwinng in.

one of my frined use atg props(he told me it is unbreakable). Have you ever use ATG props ?
IMO, unbreakable props make some issues to motor and esc.
If you have any info, Please let me know.
Thanks

Hi Chulmo, no i don’t know ATG props.
it really depends on your setup and experience. Yes you are right, “unbreakable” props puts more stress on motor shaft and bearings and ESC. If you expect to crash a lot, and you don’t mind breaking motor/ESC, then stronger props should be favourable.

Yes this is happend me so many time, even new gemfan props, If I have push too much throttle in turns
youtu.be/WeeAI6XzvQ0

Yes, replace the prop! Especially if using Gemfan nylons. I’ve found the HQ props to be much more resiliant after a crash, even with a white crease.

Learned my lesson while testing a setup while holding it in my hand. I pushed the throttle stick up and boom a prop disintegrated in my hand. One prop piece cut my hand. I panicked and threw the quad down while the throttle was still on causing the rest of the props to break!

There will always be some safety nanny that will say I’m irresponsible and had it coming by firing up a quad while holding it. Whatever, but I know I’m not the only one who’s done something stupid like this. Anyway, lesson learned, running crashed props is like shooting razor blades out of a cannon. Hope it will save others from a bloody hand or worse.

cutting fingers is inevitable in this hobby, if one hasn’t done it already, he’s not been in this hobby long enough :) And we always learn from mistakes we make :)