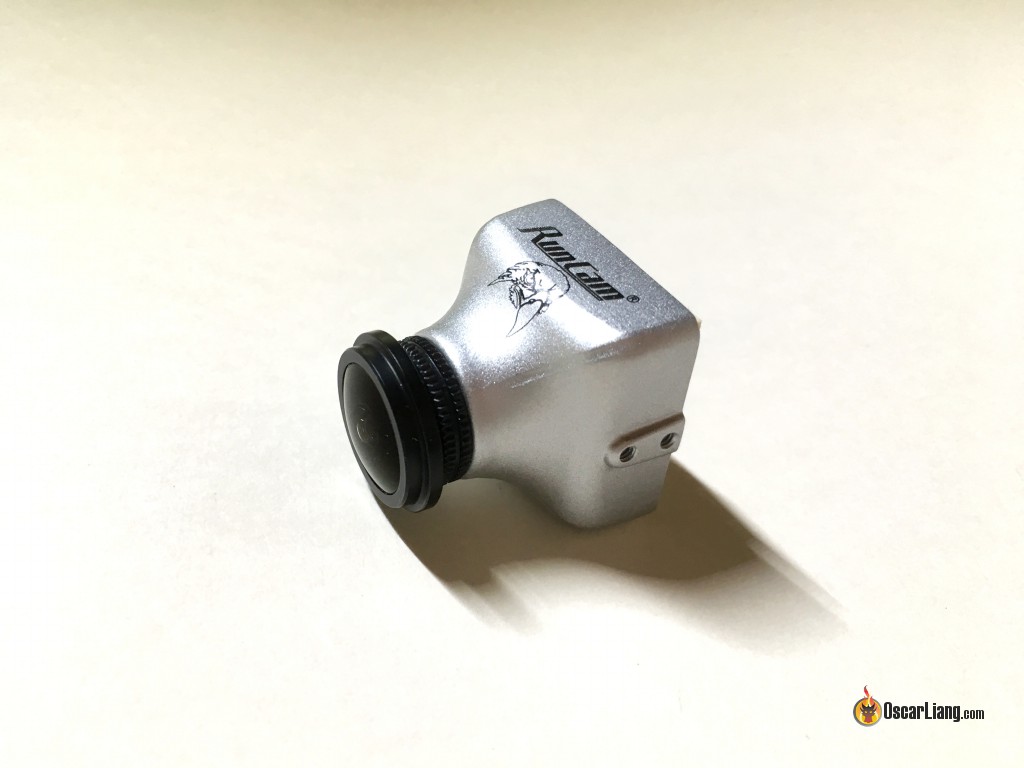 Runcam recently released the Night Eagle FPV camera, designed entirely for night FPV flying. In this review we will compare it to what most would consider a good all-around daytime camera, the RunCam Swift.

The Runcam Night Eagle is strictly a night vision camera, because it’s BLACK and WHITE only. It does not produce color video regardless day or night. If color video is important to you, then you may want to consider the RunCam OWL, or Owl Plus.

The Night Eagle is available at Runcam, and BG. This review is written by Sirdude (IntoFPV).

Like all of RunCam’s products, it came well packed. Additionally it came with the customary minimal documentation, but really, not much is needed. Inside the box was the camera, the mounting yoke, the power/signal cable split into two connectors (one for power and one of signal). An AV cable for plugging directly into a monitor/ DVR was included and there was a small bag of hardware including screws, nuts, washers and bushing for different mounting solutions. 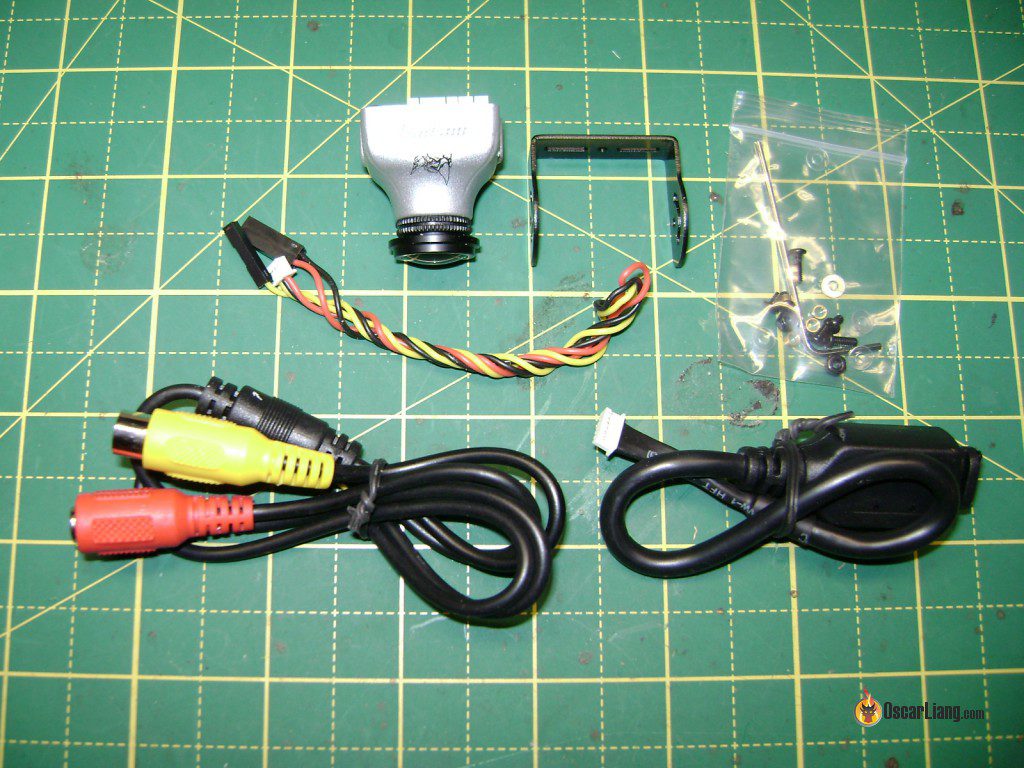 In appearance, the unit is very similar to many cameras in this class. The most notable differences for me are that the connectors have been moved to the top left corner of the unit and the mounting ears (like on the Swift) on the back plate are gone. The Swift was actually shipped with an additional back plate that did not have the ears to allow it to be used with mounting solutions supplied with some of the frames. The Night Eagles yoke and camera housing have both been modified so that you can still mount it using the supplied yoke, but without the mounting ears of the Swift. 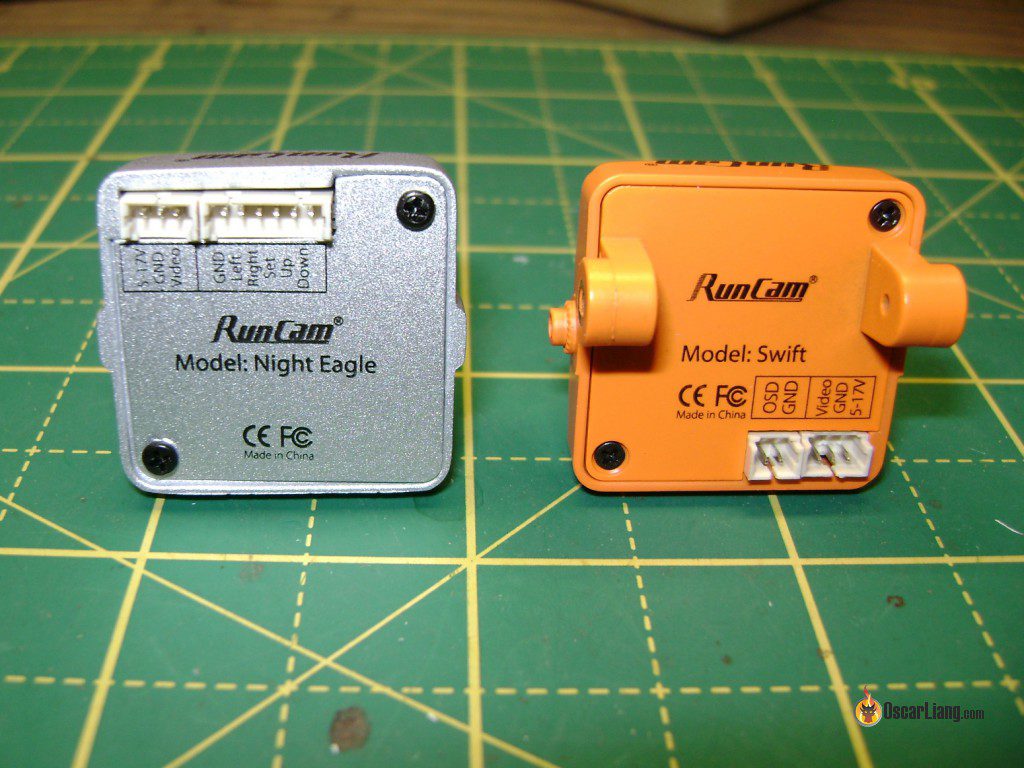 The connectors being on the bottom have always been inconvenient and it puts unnecessary stress on them when the camera is tilted at a severe angle. The ears on the back plate being gone give you a couple more millimeters to play with when you’re mounting this unit….which can make the difference in some of today’s smaller builds.

I built a small testing platform so that I could run the Night Eagle and the Swift under identical conditions at the same time. I made up a testing cable that allowed both cameras to be run off if the same battery so they would get exactly the same voltage. Each camera was wired to its own DVR so that footage could be recorded simultaneously. The assembly had four magnets glued underneath so it could be positioned on the hood or roof of a vehicle without the use of bungee cords etc. 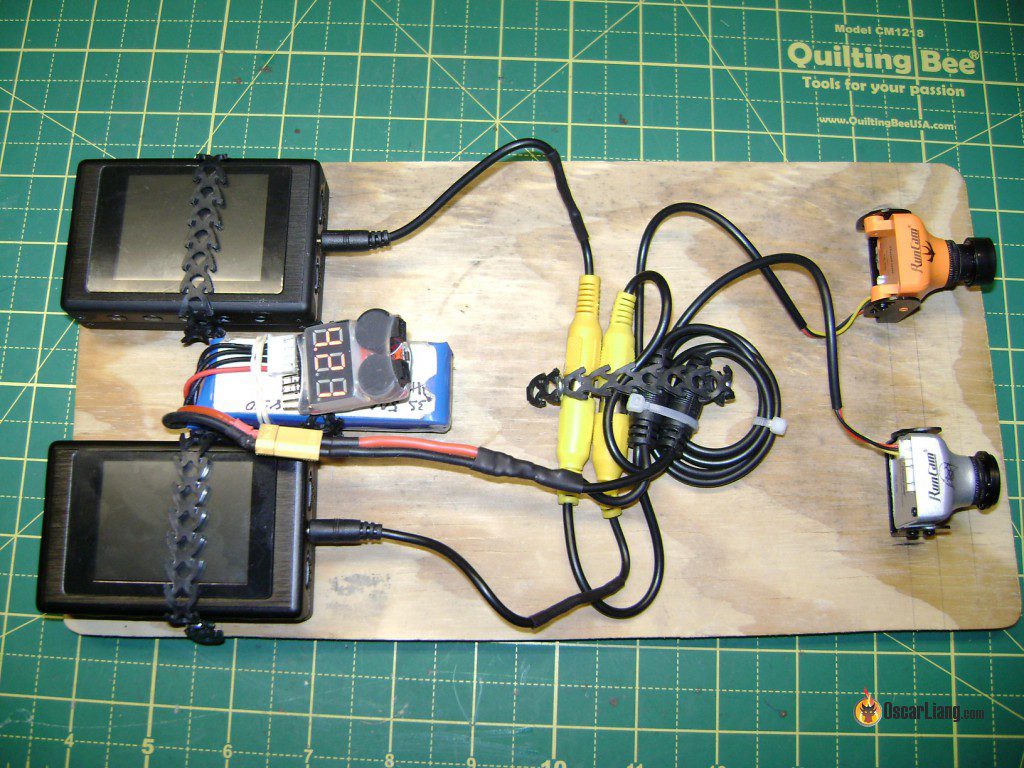 The idea was to run both camera at the same time so the lighting conditions and other environmental factors would be exactly the same. My thought was that I would run them around the neighborhood which would provide changing scenery, and lighting conditions (especially at night) from exactly (almost) the same vantage point for both cameras. This worked well for the daytime run.

However, as I was preparing to make the same run at night for comparison, I lost the video feed from the Night Eagle. After a short time it would come back, but it never stayed “on” long enough to get around the neighborhood without it failing. To try and document the event, I placed the camera on my workbench, hooked it up and waited. The camera was not disturbed and was hooked to a fully charged 3S battery. After about 5 minutes I captured the following.

I checked the cables I had made up with a meter and could find no issues. I switched the cables (used the ones I had made for the Swift which was not having an issue)….no change. I swapped the DVR’s around ….no change. I tried a different battery with a full charge….no change. I recalled that I had read that there has been a problem with some of the earlier cameras (Swift included) having a bad connection in solder joints or with some of the components and the cameras would function intermittently. As I recall, the manufacture’s solution was to place a piece of dense closed cell foam on the circuit board so that when the cover was put back on it would apply pressure to the board muting the vibrations and “curing” the problem. I opened the camera up to take a look. 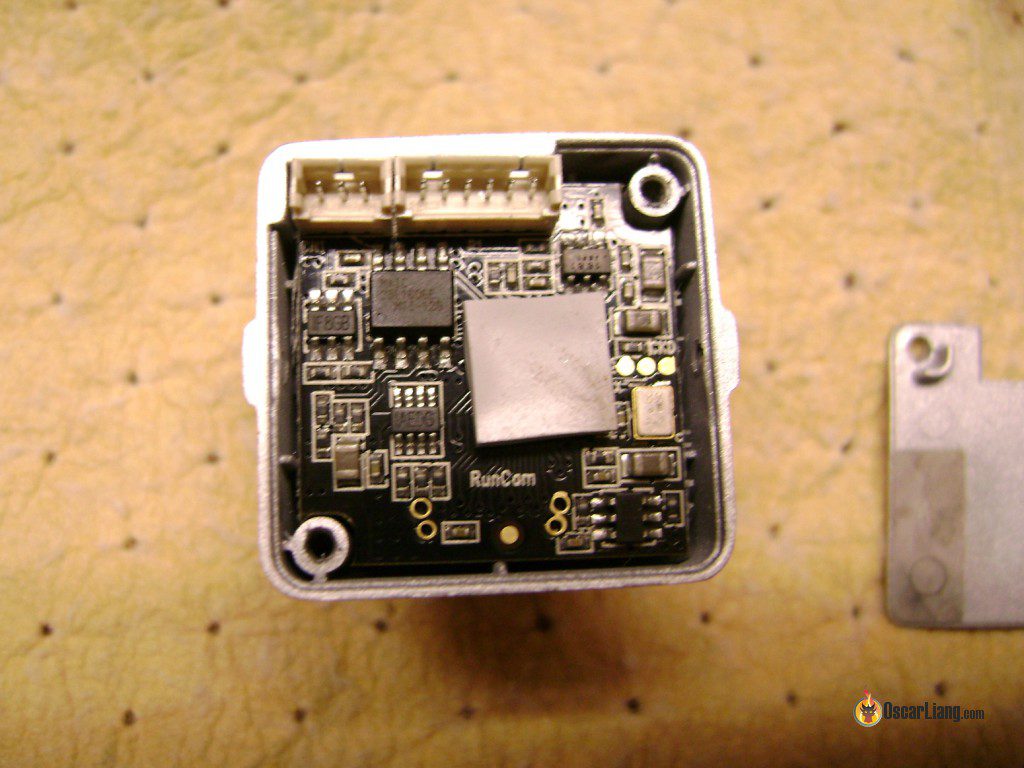 It seems that the Night Eagle is a victim of the same flaw. That little grey square – a piece of double sided foam tape stuck to the back of the processing chip. Looking at it, it was clear that it was not making contact with the back plate when it was installed, so if it’s purpose was to apply pressure to the board that was not accomplished.

After removing their tape, I took some of my own foam tape which was little thinner and placed two pieces on the component (making the overall thickness just a little more than theirs). I closed everything back up and powered it back up. Forty- five minutes later it was still going strong. 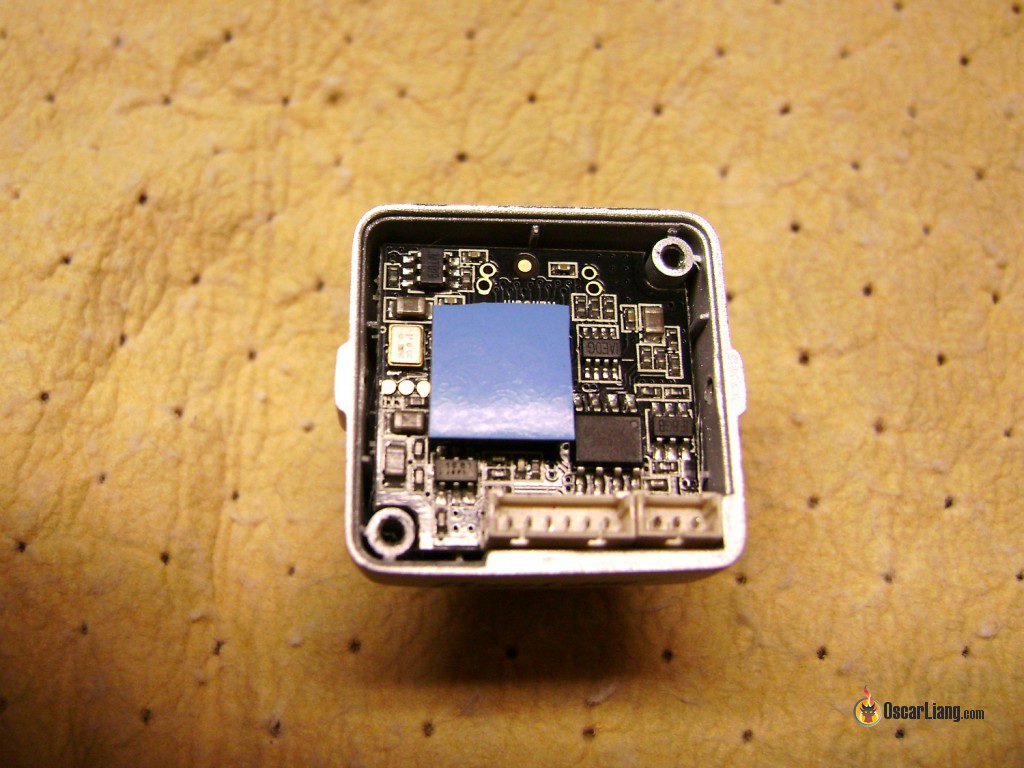 Now that the Night Eagle was not cutting in an out, I could make the night time run.

For the daytime footage, the Swift performed as one would expect. The Night eagle while all images were Black and white the contrast was good and it was easy to see the same level of detail as the swift….more in some of the really shady areas.

When obtaining the nighttime footage I followed exactly the same route at approximately the same speed. The lighting conditions varied greatly due to the presences or absence of streetlights.

I was excited to get the opportunity to review this camera. One can plainly see that during the testing there are areas that are NOT flyable with the Swift, but are with the Night Eagle. If you fly during the hours of dusk or even after dark and color is not important to you, the Night Eagle may be a good choice for you.

That said, I must confess that I am disappointed in the cameras reliability. For it to lose the video output with less than a total of 30 minutes running time is a big red flag for me. When I opened the camera and saw that little piece of foam tape with the apparent purpose of stabilizing the circuit board, I was disappointed. To me, that is a stop gap measure (at best) to correct a design flaw in the camera. Add to that it did not work… that it wasn’t even touching the back plate further speaks to the issue of QC/QA. It is of course entirely possible that little piece of foam tape had nothing to do with the video drop out, but is it a coincidence that when I added enough foam for the back plate to put a little pressure on the circuit board, the problem went away? I don’t know. I would like to think that this is an isolated incident with the unit I received, but I guess only time will tell.

For the record…this camera is going in my next build.

Sorry for the delay in responding…may not be useful to you anymore but they were both the Lumineer DX600’s. Nice DVR’s but really overkill for what I was doing.

Excelent test and review .
What DVR´s were you using on that double testing platform?
Thanks

I toasted my Eagle when I hooked it up wrong. The burned up part is the 6 lead SOT marked “IF8GB. Any idea what that is?

Do you know which sensor is used in the Night Eagle?

What about the latency of the Night Eagle?

I noticed no significant latency in the test I did. However, these tests were done at relatively slow speed which may have which may have not been fast enough for any latency to show up.

Chris…..I agree, a comparison to Owl and Owl Plus would have been interesting, but I didn’t have either one of those cameras.

Enlightx….I looked like a regular piece of double sided foam tape to me. If it were a thermal pad of some sort, it wasn’t doing any good as it was touching nothing but the chip it was stuck on and therefore had no way to transfer heat to anything else. Add to that that when I added enough to place pressure on the board the problem seemed to clear up leads me to believe it’s purpose was to apply pressure to the board, which it was not doing.

Oops, i meant Owl Plus (not Night Owl).

are you sure that foam pad wasn’t a thermal pad? i thought that was why they had metal frames on the eagles so it acted as a heatsink for the chip.