Here is a review of the Runcam Swift – a small form factor FPV camera. It is tiny but Runcam assured us that it has the same high performance as the PZ0420M, and its flexible mounting works on majority of the frames. Let’s find out.

Release of the Runcam Swift

Get your Swift FPV cam from BG (link). 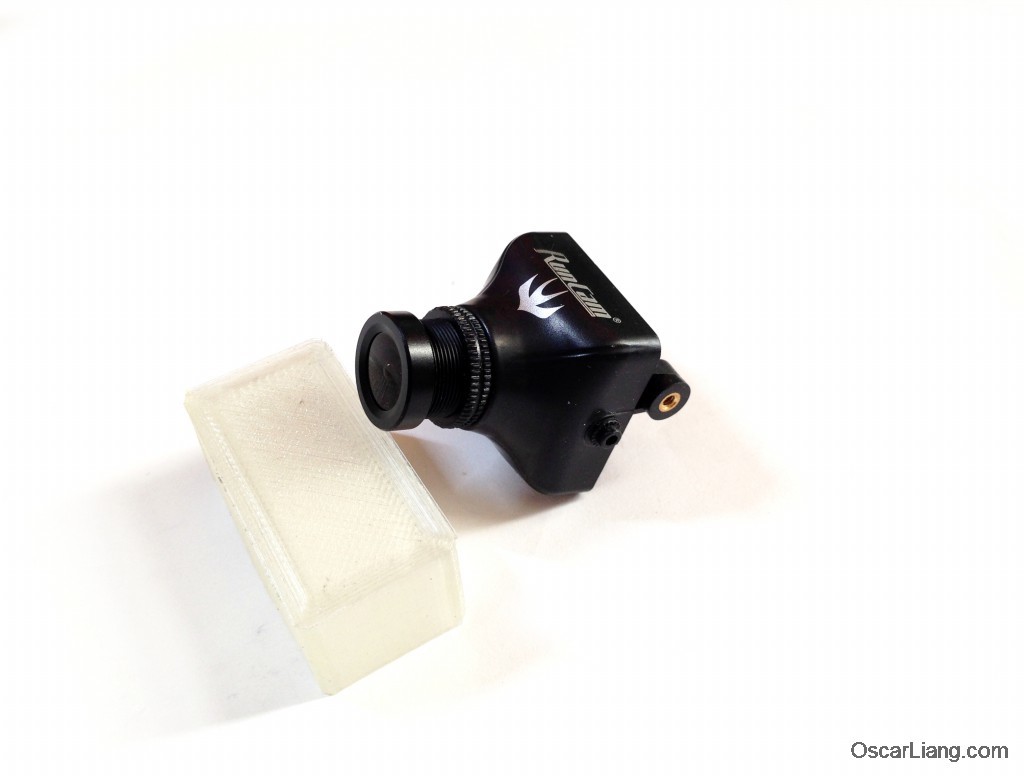 Runcam’s PZ0420 and Sky series FPV camera has been very successful, I use both of these cameras on my quadcopters and they perform brilliantly.

HS1177 is another popular FPV camera among mini quad builders recently. It has slightly smaller dimension than the Runcam Sky, and for some strange reasons many popular 210/220 size mini quad frames are designed for cameras like the HS1177 camera, making the Runcam Sky (plus) unable to fit.

Not sure if this is one of the motivations behind Runcam’s new camera, the Swift is nearly the same size as the HS1177, which means any frame that supports HS1177 would be able to use the Swift camera too from now on. 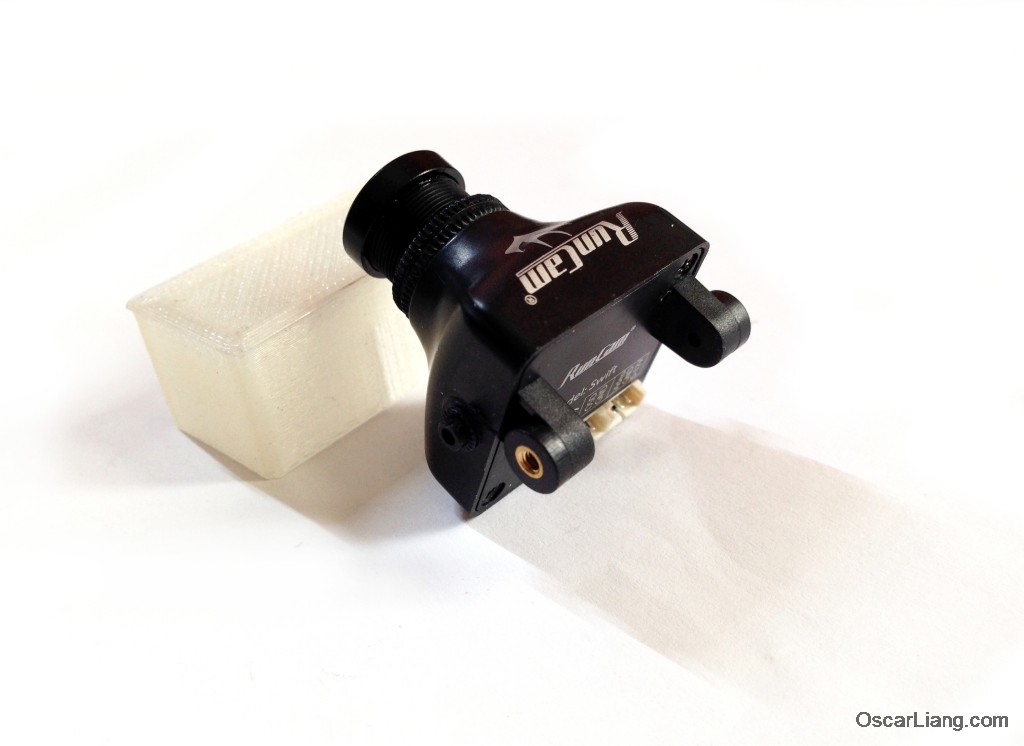 The Swfit is said to have the same performance as the Runcam Sky Plus, being just smaller and in a black plastic case (housing). In their promotion pictures they also showed us an orange version (which made some of us very excited). That will come out a few weeks later (possible in May), along with some other unconfirmed colour as well. 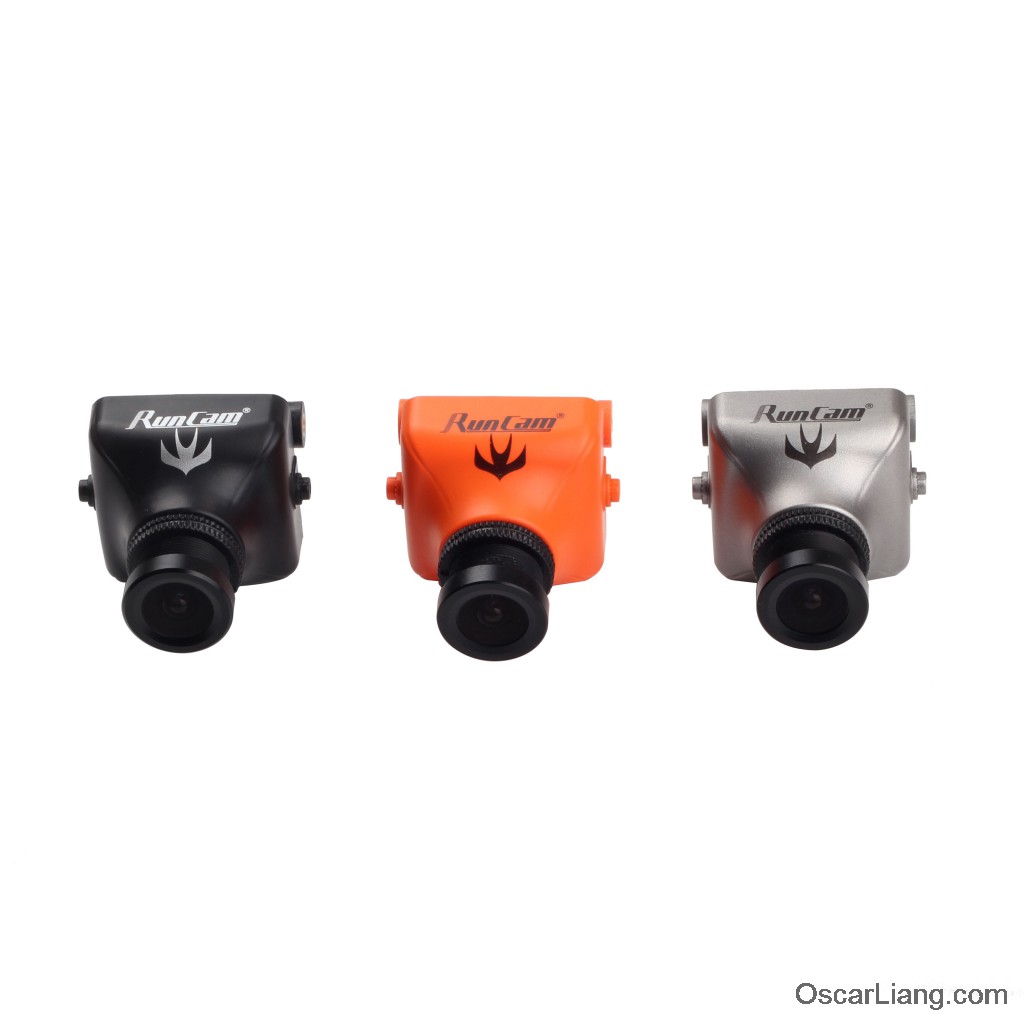 What’s the in the box

It comes with the usual cables and accessories. The cable is a good quality silicon insulation wire which I prefer over plastic wires. 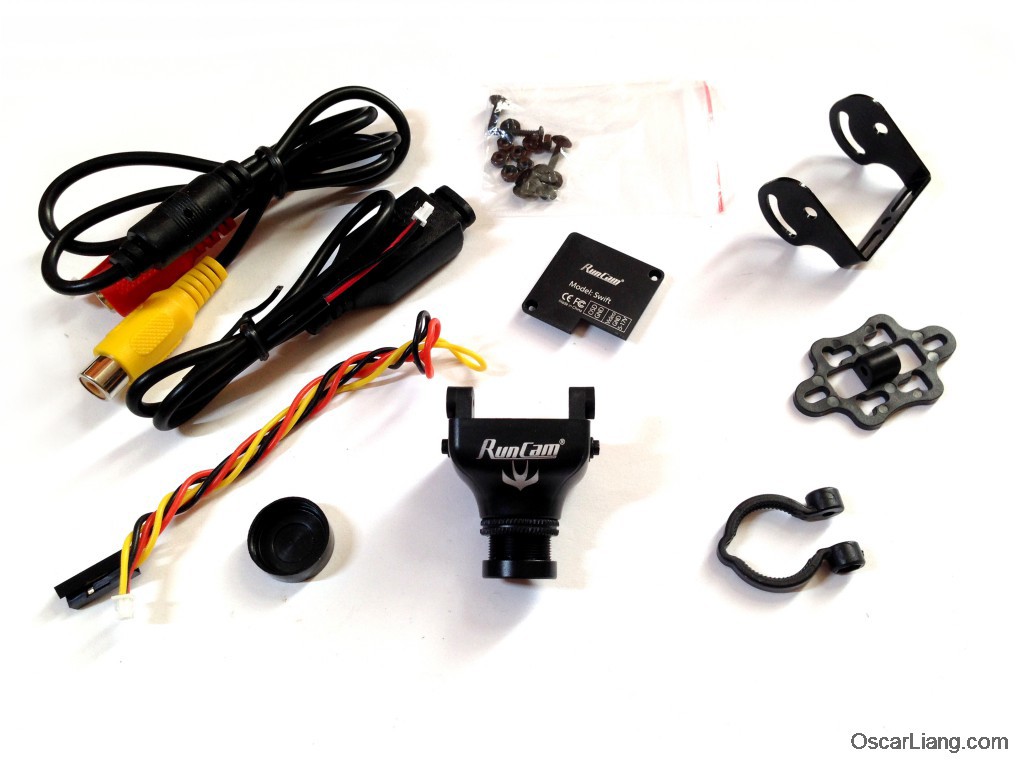 One of the great features is the mounting solutions the Swift offers. 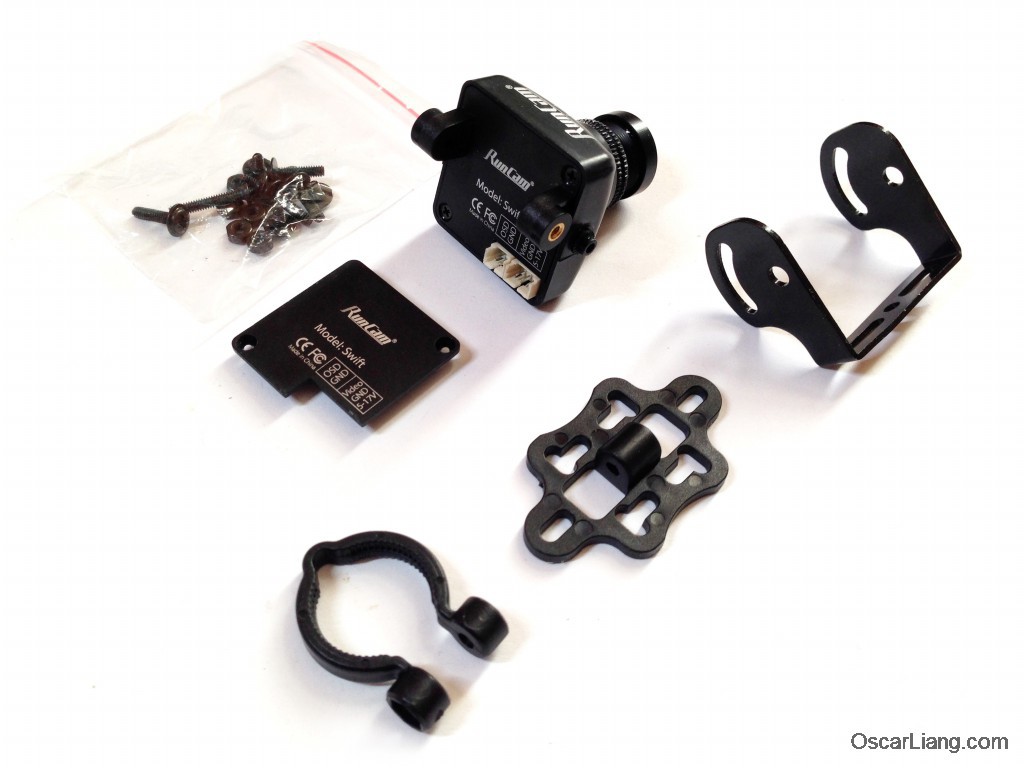 There are 3 types of mounts, which probably cover the majority of mini quad frames right now on the market. Even if you don’t want to use any of the mounts, they provide a normal back plate you can swap out.

The Lens mount seems to limit your tilt angle at 35 degree though, maybe they can make the hanger bit longer. Some people now tilt their camera as far as 60 degree these days :) 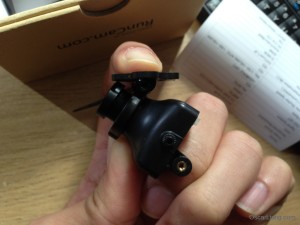 There are IR blocked and IR sensitive versions available, but there is only one lens option (2.8mm) which gives you 90 degree FOV. (I have asked them to make some other FOV lenses such as 2.1mm and 2.4mm)

It takes 5V to 17V of DC voltage which means it can be powered by 2S to 4S LiPo directly. 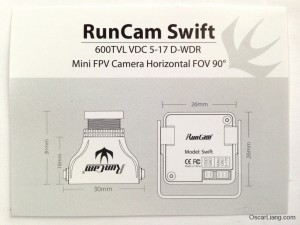 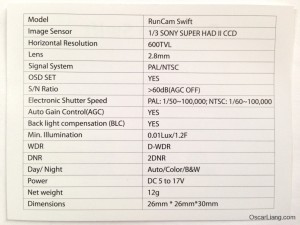 There are 2 JST connectors on the back, one for signal/power and the other is for the OSD (for changing settings). On the camera I received the connectors are placed at a slightly funny angle, not a biggie though.

And I think it would make more sense if they put the connectors on top rather than bottom, so when you tilt your camera it’s less likely to have the frame/camera press on the connector and wires. 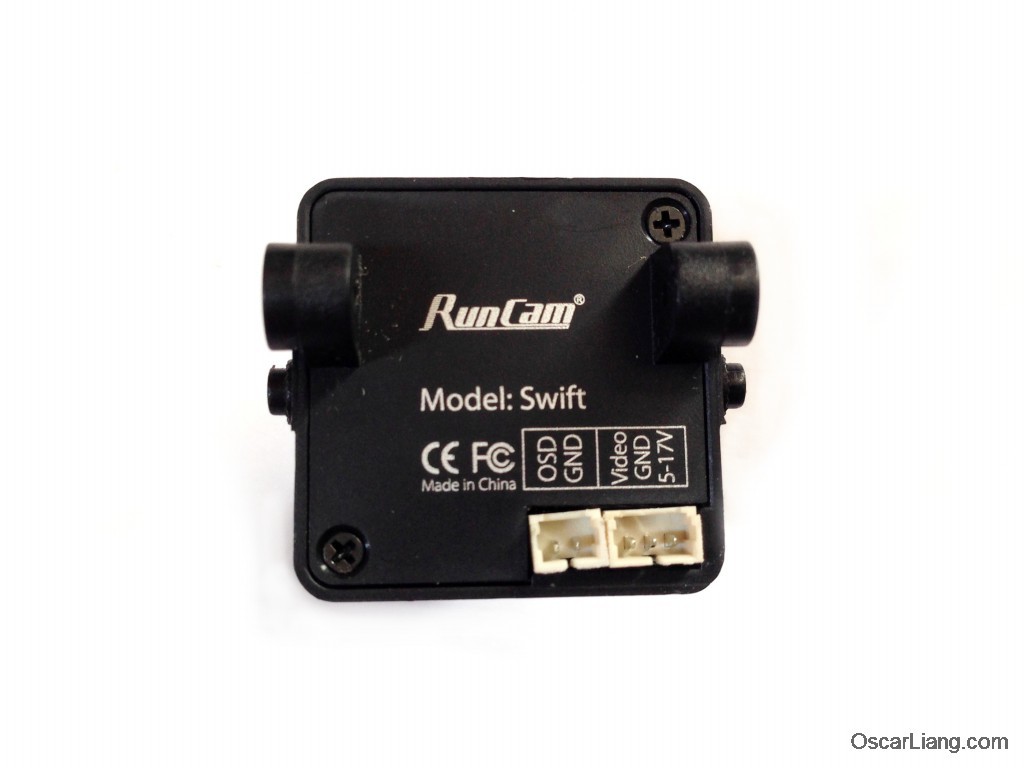 Performance Comparison to the HS1177

Every user probably have their very own preferred settings, so I decided to test these cameras only under the default settings just to be fair, to give you an idea how they perform right out of the box. 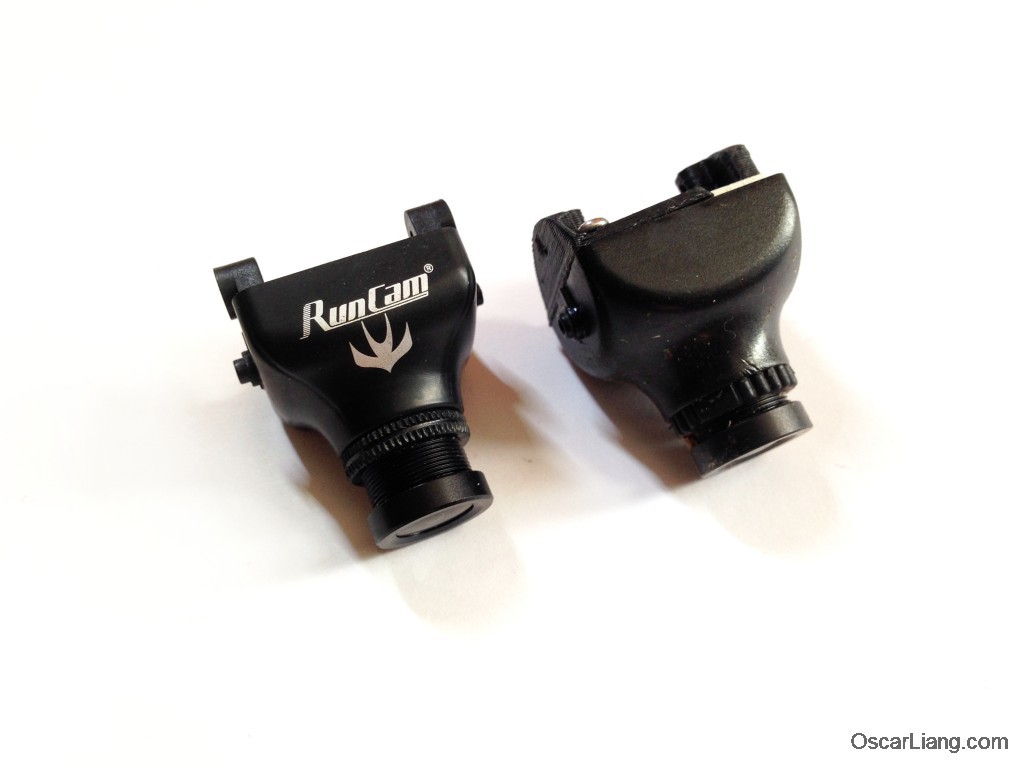 I have been using the HS1177 camera on my Speed Addict 210 build, because it used to be the only camera (I think) that fits on this frame. I will swap it out and install the Runcam Swift for testing, so all variables are the same (VTX, Antenna, PDB etc).

The HS1177 and Runcam Swift are using the same Sony processing chip and sensor, however under factory settings they look quite different in terms of footage quality. 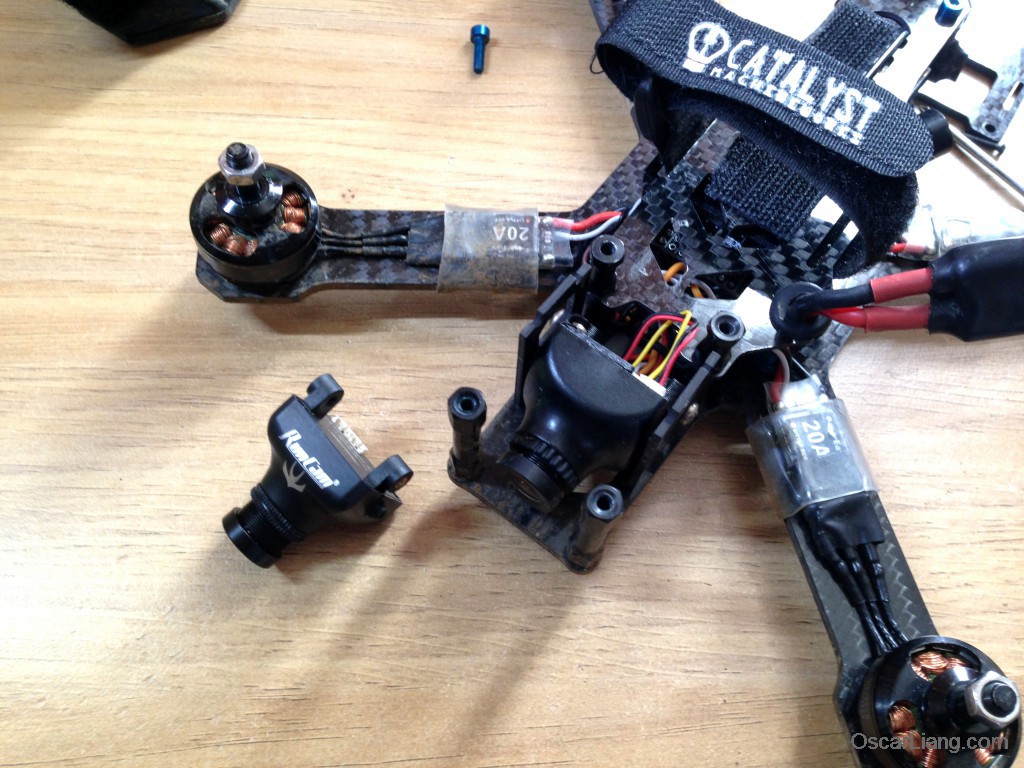 With default settings, Runcam Swift has a warmer colour than the HS1177, the colour on the HS1177 looks more natural and closer to real life though. That’s probably just the contrast setting which you can adjust on both cameras to your liking. Images from the Swift look sharper and have a bit more detail to it. 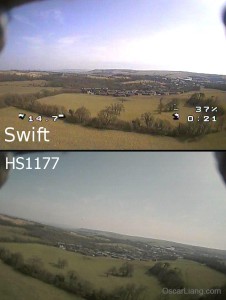 Both camera works great when looking at low light areas. I can see the trees inside of the wood very well. 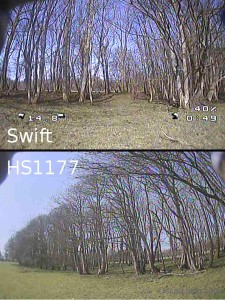 A shot from a dark area to a brighter area. 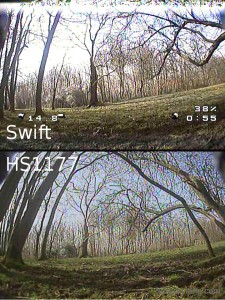 And here we had the cameras pointing directly to the Sun. Both cameras worked well, but the colour of the HS1177 start to act funny, . 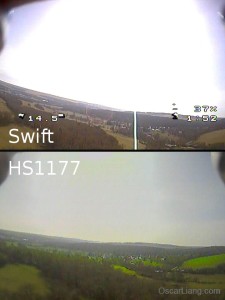 And I notice when I pointed the HS1177 to objects of different brightness, there is a short time of noticeable transition (check my video). The image also looked a bit blurry, possibly an un-focus lens from the factory.

Default settings on the Swift definitely need a bit tweaking in my opinion, it would work much better. If you don’t know where to start, have a look at my recommended settings for the PZ0420 FPV camera.

For anyone who loves the PZ0420M or Sky Plus, you should continue to enjoy this camera. For new users, I would recommend it for both excellent performance and the flexible mounting solutions.

Backpacks for Quadcopters and other Multirotors

Hey Oscar,
Did you have any issue with the OSD displaying?
Just checking to see what I need to do to have this displayed. I recently purchased this drone but no OSD is setup:
banggood.com/Diatone-2019-GT-R349-TBS-VTX-Edition-135mm-3-inch-4S-FPV-Racing-RC-Drone-PNP-w-F4-OSD-25A-RunCam-Micro-Swift-p-1427232.html?rmmds=buy&cur_warehouse=USA
Thank you for your help.

I really appreciate your reviews.
Taking into account your comments, it’s HS1177 close to PZ0420 performance?
I am looking to get the cheap camera which works relatively good and PZ0420 seems to be cheaper.
Also I would appreciate further camera proposals to purchase :P
Thanks in advance.

they are both good cameras, choose whichever one is easier to mount for you…

My runcam died midnight after one month of usage. I was running it directly to the pdb on 4s. Same thing happened the day before to another club member. He had the same setup.. Going to try and get a replacement from runcam.

Nice cam, just bought one. But how the heck do I change NTSC/PAL Setting?!

i think it’s printed on the sticker on the box?

I emailed RunCam about this and they told me it can’t be changed. You just need to check with whoever you buy it from as most people list it as both!

Hi Oscar, thanks for the review! Did you notice any length difference (back of base to lens) between the HS1177 and the Runcam Swift? I ask because I was going to build up a 210-R as well and I didn’t want to use a longer camera that would stick out the front or top if the Swift is actually longer. Thanks!

Both cameras have same body length, but the Swift has longer lense. So yea it’s longer than HS1177 overall… can’t tell how much though I don’t have HS1177 anymore, my guess is around 5mm?

Where did you get those camera side plates? Or if they came with the frame do you know where you can get replacements? I need ones similar for a QAV-R. Thanks.

they come with the frame. I am not sure about QAV-R, i never used them.
maybe you can try to find some 3D printed ones?

Can you show how you mounted the Runcam Swift to the Speed Addict?

Which OSD are you using with the runcam? Looks nice and simple

That’s the minimOSD with MWOSD firmware :)
there are many display options, but i normally only use voltage and timer :)

does the HS117 allow for normal and upside-down mounting? To make sure I can choose where I want the cable/plug to be when the space gets tight.

no problem at all, the 1mm difference is negligible.

In your tests, were you testing the IR sensitive or IR blocked version of the RunCam Swift?