If your Raspberry Pi Power Supply is not good enough, you will probably encounter this embarrassing situations. 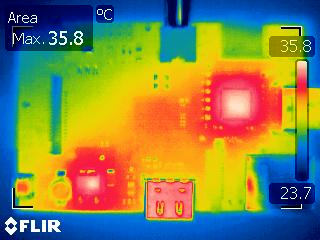 Running Raspberry Pi off a phone charger, why bother with a proper power supply?

Some Raspberry Pi users receive their new Raspberry Pi and fire them up with a cell phone charger. They are thrilled and scream, “Yay! it works!”.

But ideally an investment in a quality power supply unit that will not only enable their Raspberry Pi to turn on and run, but allow for a small non-powered USB hub and some overclocking would be fantastic!

Required amperage is stated to be 700mA. But do not just get a raspberry pi power supply that is labelled “output 700mA”! Because most of the time they do not actually deliver that much.

It would be wiser to purchase one that can output more than 700mA. How much is too much though? 1.5 Amps? 2 Amps? If we knew the upper and lower limits, we could make a better choice. I will talk about this in the next section.

Here is a rough graph showing the power usage, current draw and voltage supply, when my raspberry pi is turning on, running idle, busy and idle again.

You can see the power/current does not change a lot when it’s running. But because I have not added any USB devices to it, so there might be unexpected times when cureent/power usage might show increase. It’s better to play safe here and get a power supply that can provide more current.

There is no upper limit for the current rating of a raspberry pi power supply, the Pi will draw what it needs. However, I would recommend 1A to 2A power supply for best value, because the Pi has an internal fuse that will trip if it draws more than about 1A. Any more power power supply would be a waste of money. :-)

The cable connecting the power supply to the Pi is equally important when considering. Many cheap USB/micro-USB cables have very thin wires, which means there is a limit on the current they can deliver. (in words of electronics, thinner wire means larger resistance. If a larger current is running through it, the voltage will drop) Which would lead to a Pi shuts down due to the lack of power (voltage dropped below working voltage).

USB hubs, when using them, they must be independently powered (as recommended by all documentations i have seen. I would recommend the power supply for a USB hub should be rated to deliver 500mA Per port, plus enough more to power the hub itself. For a 4-port hub the power supply would be quite safe to be rated at 2.5A, so it can deliver enough power for each port.

Anyway If you have ANY kind of problems that involve the Pi ‘freezing’ shortly after plugging in a USB device check your power supply first!

Some people might be interested in going mobile with the Raspberry Pi, therefore have the need of a battery power supply. AA battery is a cheap option and a lot of people would be wondering if they can handle raspberry Pi.

It’s probably more likely to use a high enough voltage battery with a step down voltage converter, to get 5V out of it. For example a 11.1V Lipo Battery or NiMH Battery.

Check out BattPi – BattPi is a Case for Raspberry Pi with integrated Battery and Real Time Clock. Built in UPS offering up to 8 hours of battery life.

Great consolidation of the most pertinent information. I found this very useful. Any chance you might try accepting bitcoin donations?

no, the usb ports can only handle a certain amount of current. you need separate power supply if your USB devices draw a lot of current.

Ok, can I connect them in parallel on one power supply (2A) ?
Thank you very much Oscar

in theory, yes. But you might need to cut the wires and do some soldering.
I still recommend using two separate power supply for “heavy duty” USD devices.

While i was reading you nice post, this came to my mind: If there is normal power via USB and on it’s side there is a battery set, is there any way to Pi to “sence” when USB power is turned off for some reason and changed to battery?

I am working on a solution that needs to alarm when power is drop down (during blackouts) and Pi starts to use battery.

that’s a good idea, you mean like a laptop right? I am sure someone has done it already, try google…