Sending a Balloon and Camera to Space 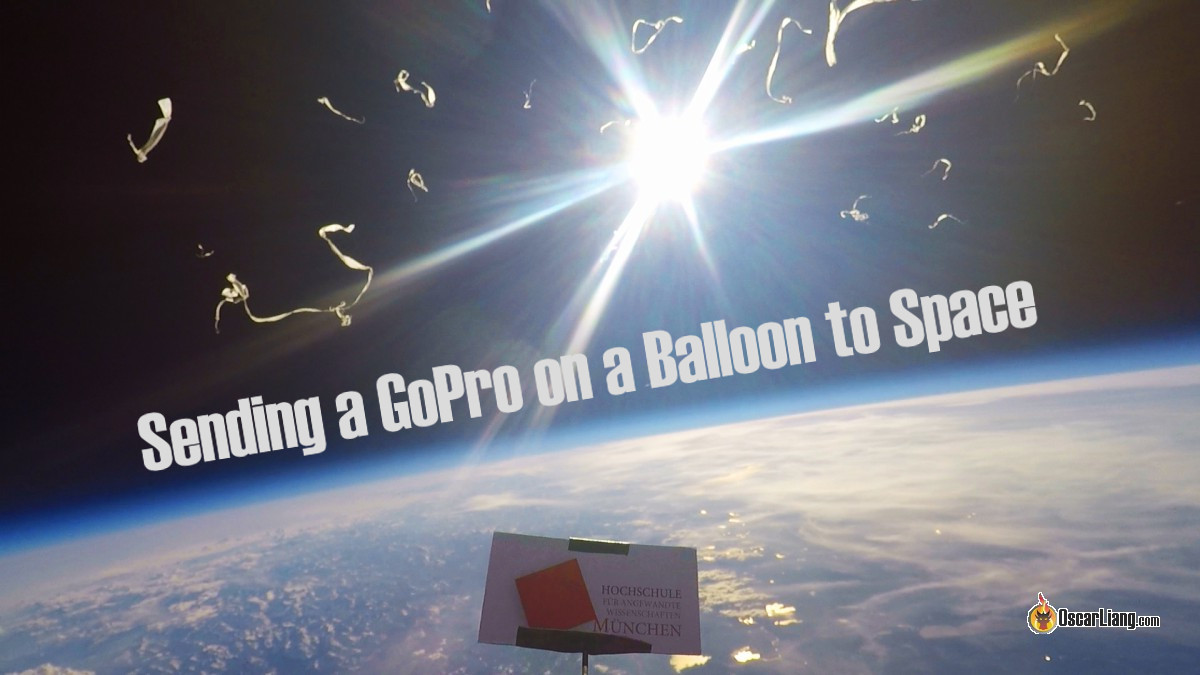 Mr Markus Grocholewski shared some amazing photos with me where they took at 36Km above ground using a balloon. The shots are simply breathtaking, so I asked him why and how he managed to send a balloon and camera to space.

Markus is working on the final video which he will upload on his Youtube channel (subscribe if you want to stay tuned). For now here is a short clip where the balloon bursts before slowly falling to the ground.

Joining the Project to Send a Balloon to Space

My name is Markus Grocholewski, a 27-year-old student studying mechanical engineering at the University of Applied Sciences in Munich. A group of students in my university was doing a team project to build and send a weather balloon to stratosphere, and I had the chance to join them later on.

They wanted to take scientific data including pressure, temperature, UV radiation, acceleration, etc using a weather balloon. They also planned to put a camera on it to take photos and videos during the flight.

Sadly the camera stopped working shortly after takeoff in the first flight, so they didn’t get any photos or videos. The group decided to do another flight and asked me to join them. I love FPV drone racing and everything flying, so I agreed without hesitation.

The group had already gathered the data they needed, and figured out how to build and fly the balloon. Therefore the purpose of the second flight was only to take videos and photos. Because of that, we removed all the sensors and just focused on mounting some good cameras on the balloon. 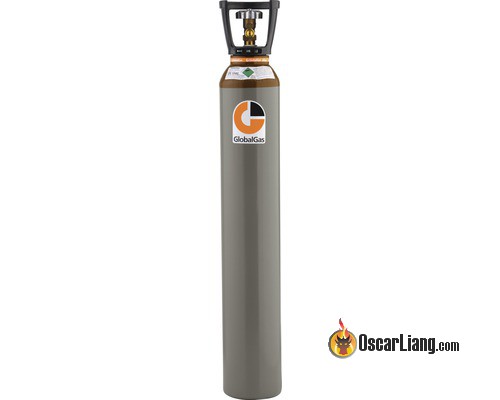 Pressure regulator with a tube

We got it from the university, it was really hard to get one of these :D 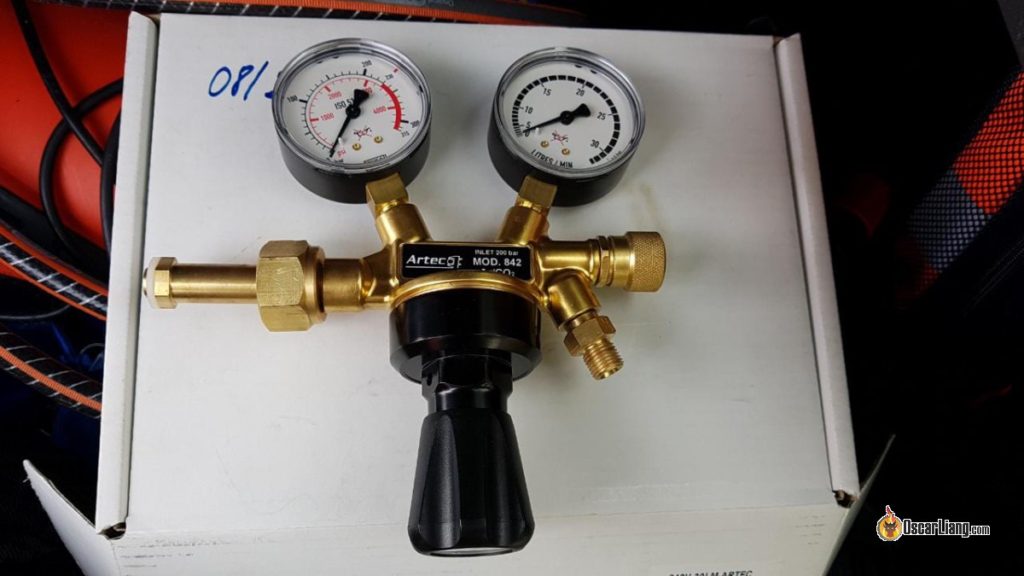 For example one of these:

Depending on the payload, you can choose a smaller or bigger balloon. Usually the weight of the balloon represents the payload it can carry.

If I repeat the project again, I would buy a balloon from the stratosphere shop. They might be a little bit more expensive, but it’s easier to calculate the exact amount of helium required using their helium calculator. This calculator only supports the balloon models from their own online shop.

We used two of these, one with telecom and the other with an O2 SIM card.

After the balloon landed, you can call the number on the SIM card and you will receive a SMS text containing the GPS coordinates of the GPS tracker (balloon). If you want to record GPS data, you will also need a micro SD memory card.

You can use the SIM from your personal mobile phone, but make sure to get a blank SIM from your provider before you use it for the balloon. If you lose it with the balloon, you can still activate the new SIM with your old number on it.

The GPS tracker takes only the old, bigger SIM cards. You will need an adapter if you have a micro SIM.

We rented 2 GoPro’s from Cam Charter Europe, and we got insurance for them just in case we lose them with the balloon. We also got a 64GB Micro SD card for each of them.

After buying all the parts, we called our liability insurance to make sure that the balloon was insured. Once you get the insurance confirmation, along with your launch location (GPS coordinates) you can then apply for flight permission from air traffic control.

This is the permission we obtained, it was valid for 2 weeks. We didn’t have to pay for that. 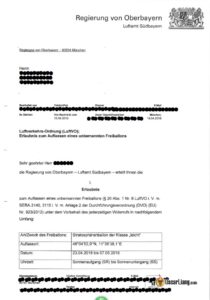 So during the 2 weeks period, we could choose any day with the best weather for the flight.

On the day we released the balloon, our group gathered at 9am near the launch site to start the preparation.

First of all, we prepared the styrofoam box with a Dremel (rotaryl tool) and mounted the two GoPro cameras, one pointing downwards and the other pointing horizontally. The GoPro filming downwards was recording in 1080p 24FPS with Superview, while the one filming horizontally was recording in 1080p 24FPS with linear field of view.

Next we setup and tested the GPS trackers. When there is good GPS signal, they actually work pretty well and have an accuracy within +/- 5 meters! To get the coordinates, you just need to call them using your phone, and you will receive a SMS text with the coordinates a few seconds later.

After the box was ready, we went to the launch location to prepare the balloon. While two guys was filling up the balloon with helium gas, the rest of the group was preparing the cords. 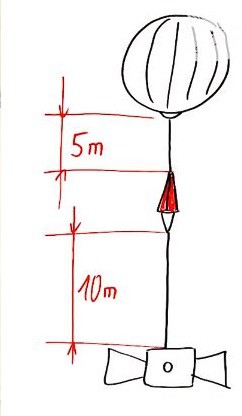 As I mentioned, it’s best to calculate the exact amount of helium gas you need with the “helium calculator” by Stratoflights. 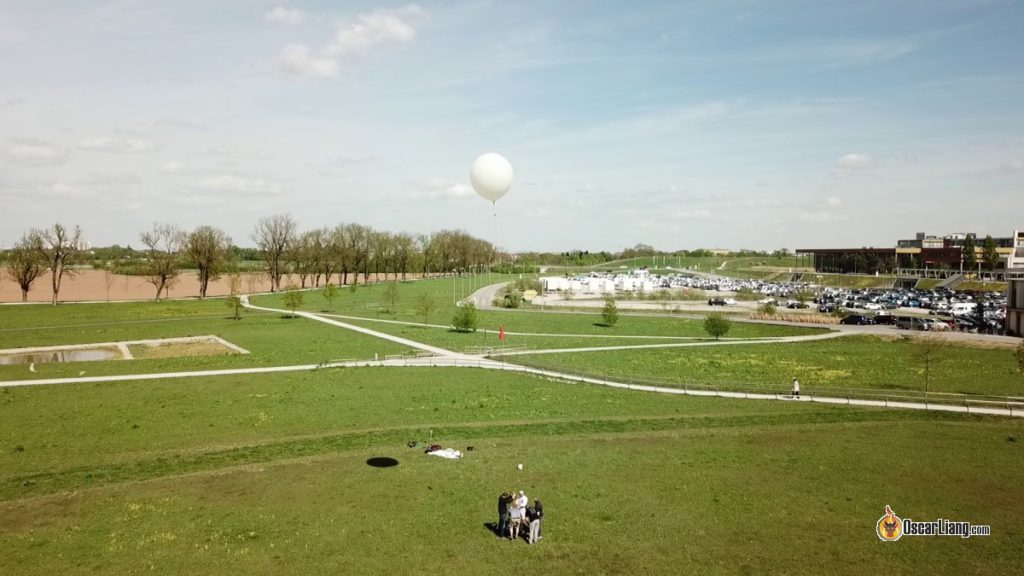 We then started the cameras and GPS-tracker, put them in the box and connected the cameras to the powerbank. We carried out one last test on the GPS trackers before sealing the box with tape.

As the last step before takeoff, we weighed the payload (everything except the balloon) and estimated where it was going to land using the flight routes calculator.

After connecting the cords between the box and the balloon, it was ready to launch! 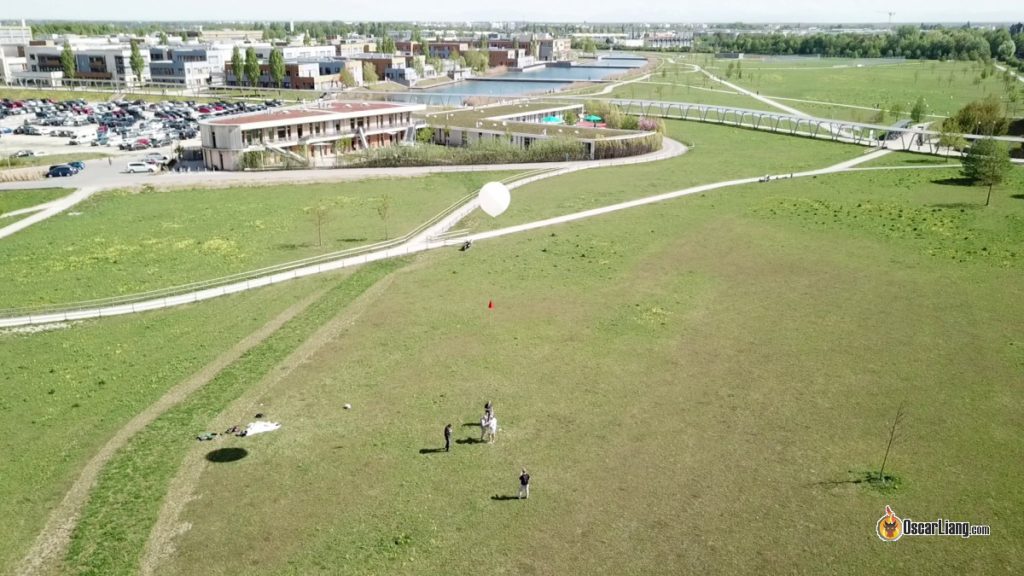 It was an absolutely strange and scary feeling when I let go of the balloon… My whole body was shaking :D 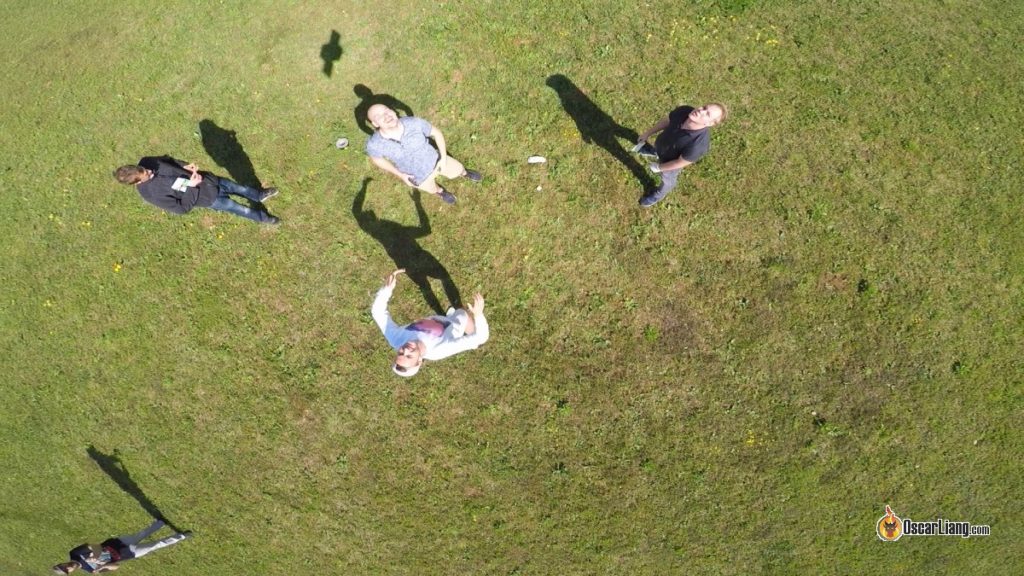 The balloon was finally in the air and we knew from the first flight that it should take about 3 hours until it lands. The estimated landing site was “Aschau im Chiemgau”, which is about 45 minutes of driving from us. 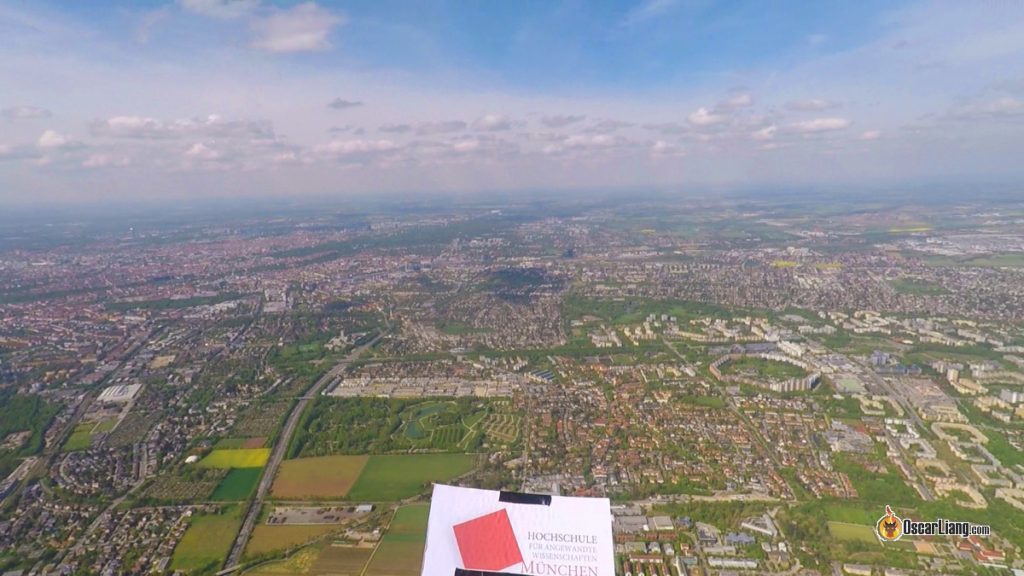 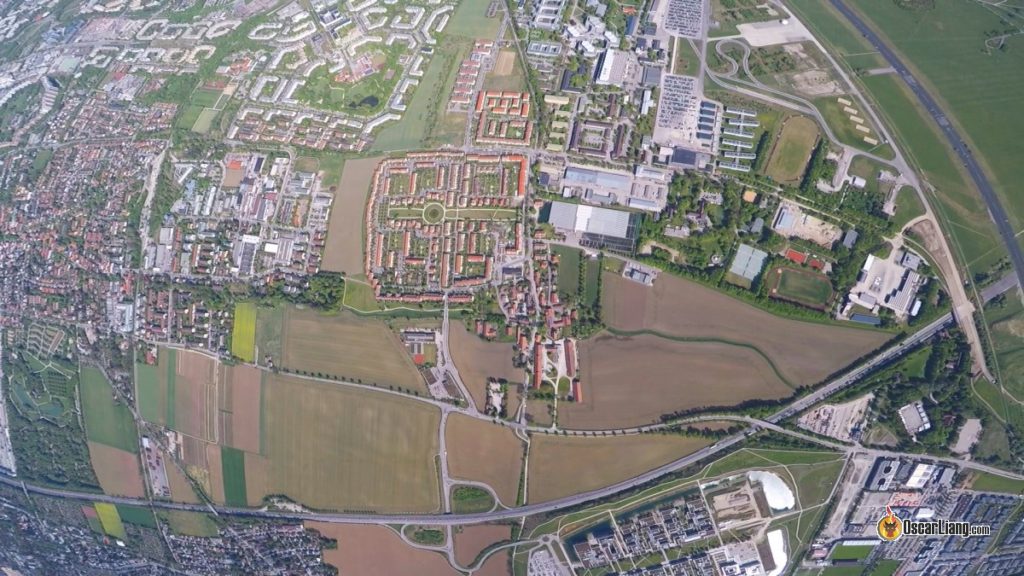 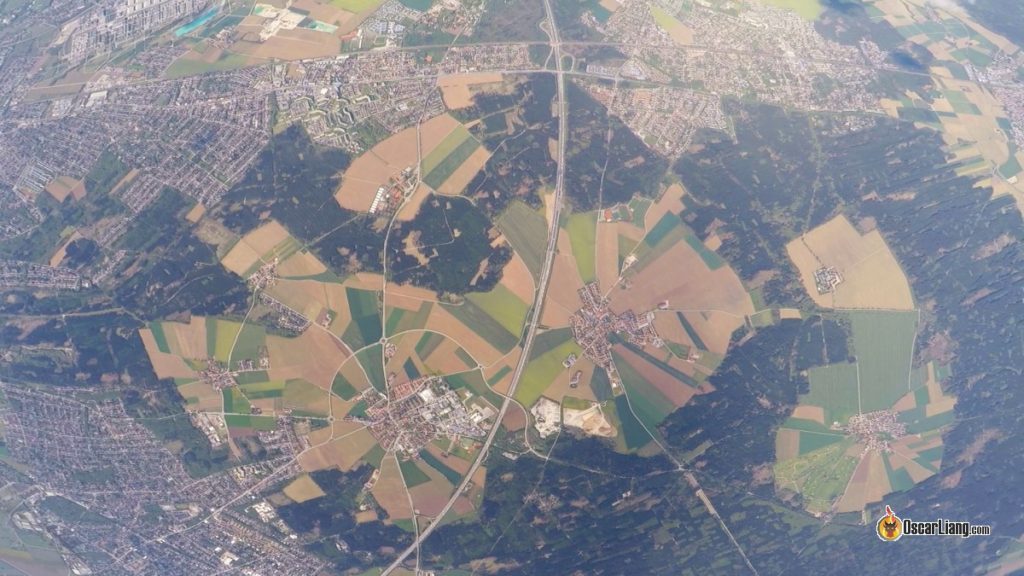 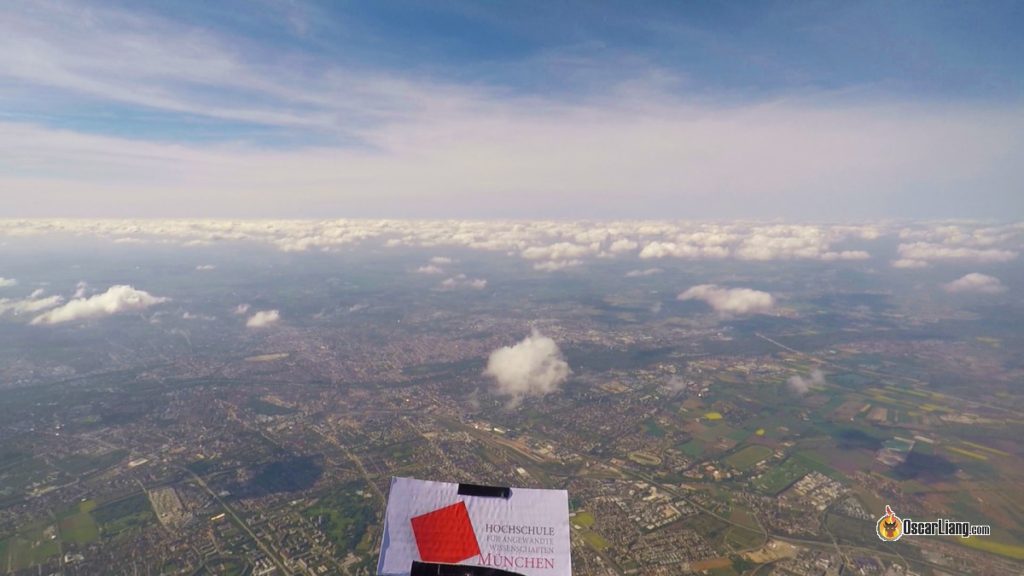 Searching for the Balloon

We picked up some beer and headed to the highway. :D

Unfortunately, we were stuck in the biggest traffic jam I have ever seen! Our navigation system told us that it would take 3 hours instead of 45 min to get to the landing site.

Two and a half hours later, we think the balloon should have landed, so I called the GPS tracker for the first time and received the GPS coordinates.

But here is the problem: the actual landing location was really FAR away from the estimated location. The balloon landed on a hill in the Austrian Alps!!!

Later on we had a theory why our balloon landed so far away. We bought our balloon from eBay and not from Stratoflights, so we couldn’t choose this exact balloon model in the helium calculator. That was probably why the amount of helium gas we filled wasn’t 100% correct.

After 4 hours, we finally arrived at the landing site and it was already 9pm. But we weren’t at the exact location yet, it took us another hour of hiking up the hills.

We still couldn’t find the balloon because it was just too dark, so we returned home.

A few days later, we went there early in the morning and tried again. We actually found the balloon this time, but it was stuck in a 15-meter-tall tree (50 feet). It was just impossible to retrieve it, so we left again without any success ;( 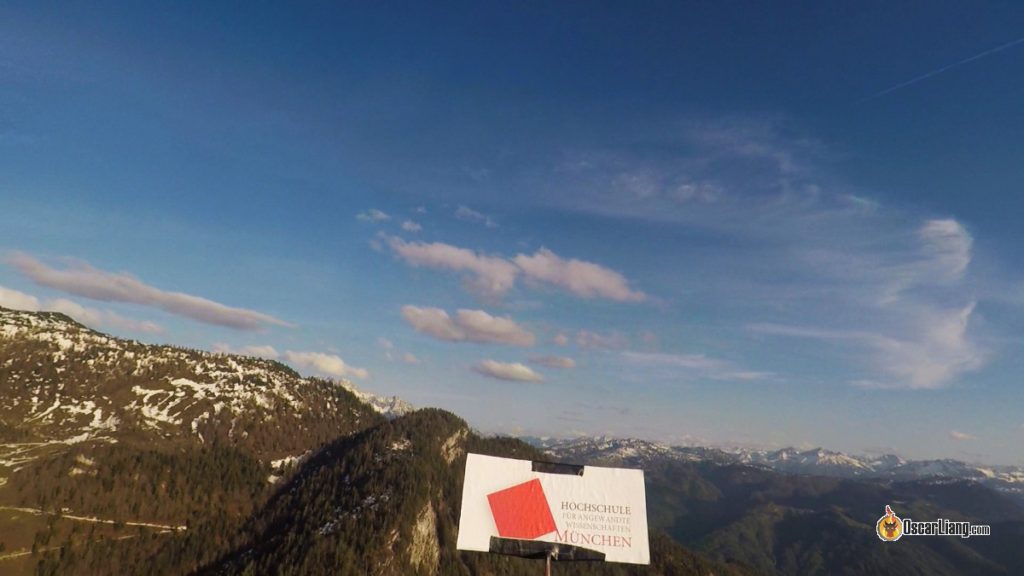 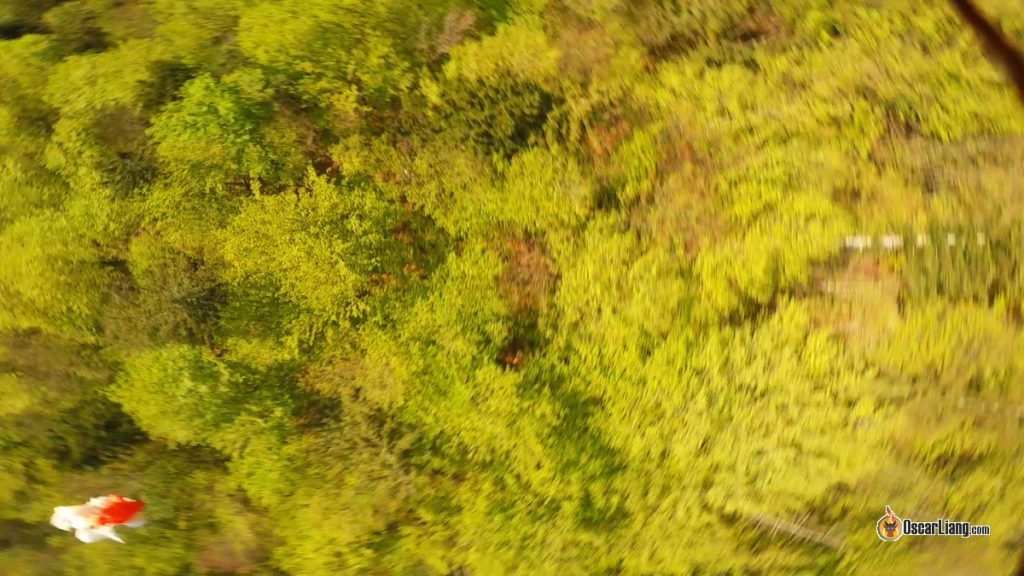 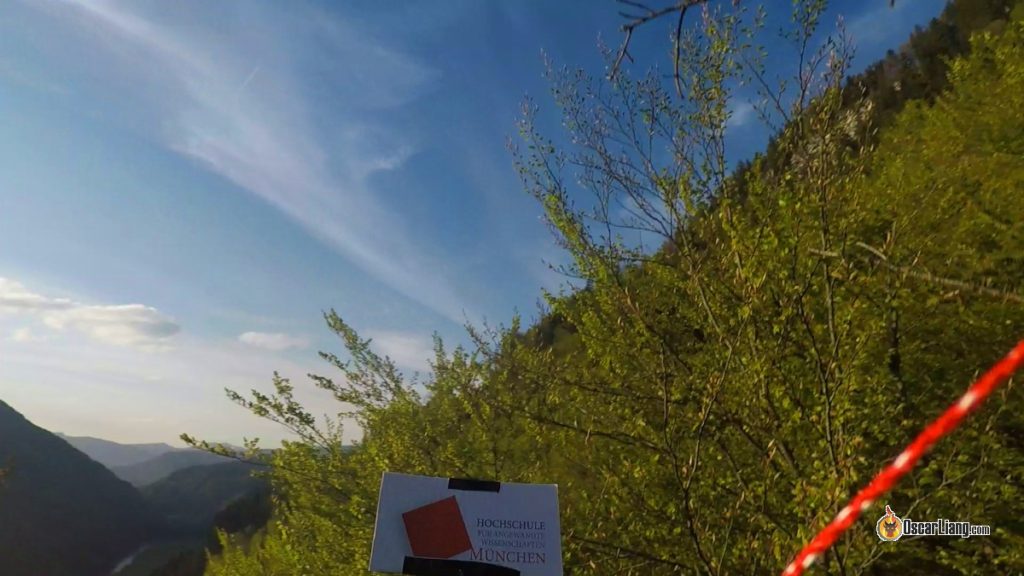 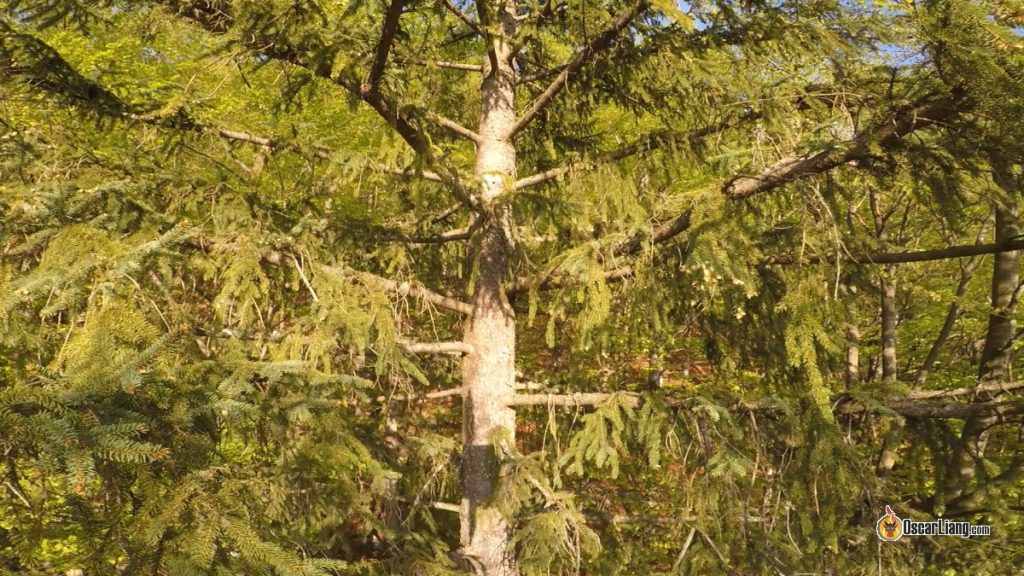 We were about to give up, but I had this idea to join a Facebook group for climbing, and asked if there was someone willing to climb the tree for us. Lo and behold, a tree-climber agreed to help us recover the box!

We managed to get the styrofoam box down, but without the balloon and parachute. So if you go to the landing site now you will probably still see them hanging up there :D (47.60910, 12.47879)

The hard time came to an end and we were overjoyed after watching the awesome footage from the cameras! 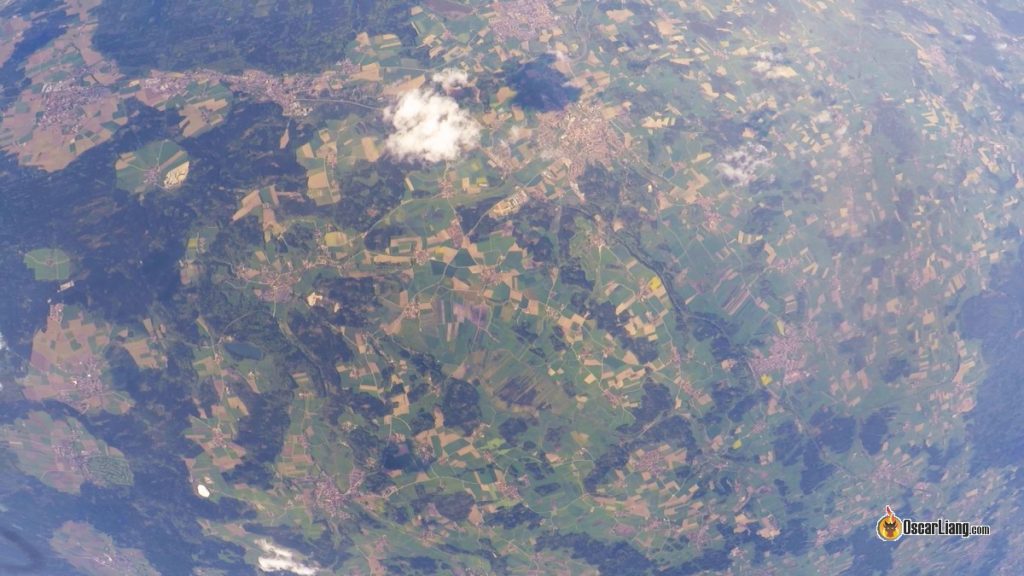 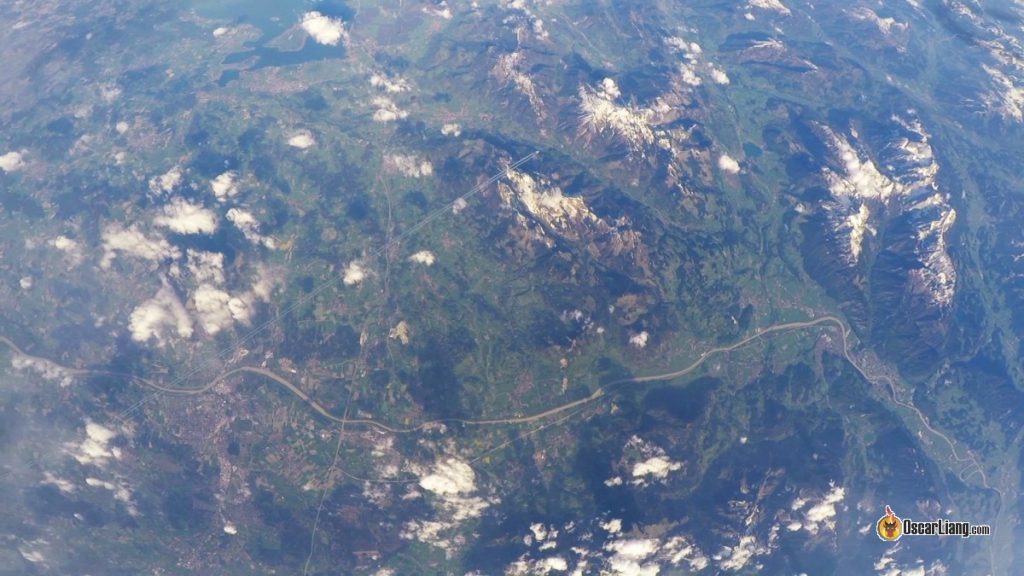 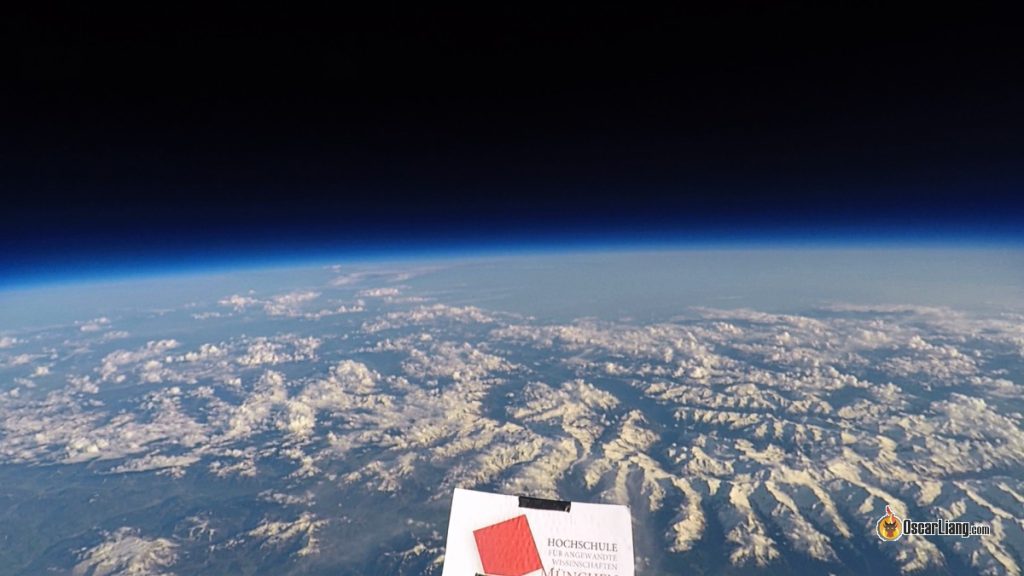 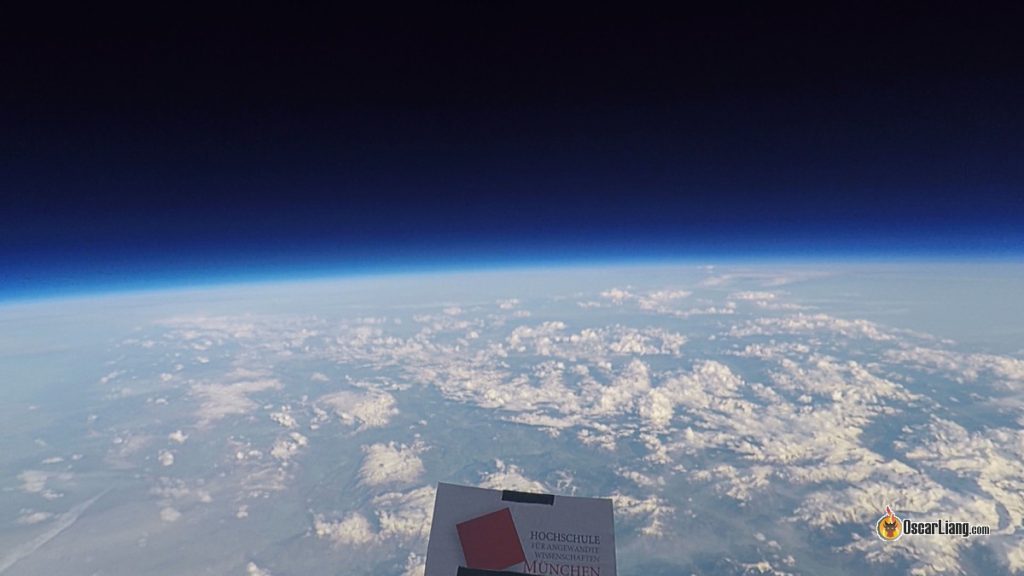 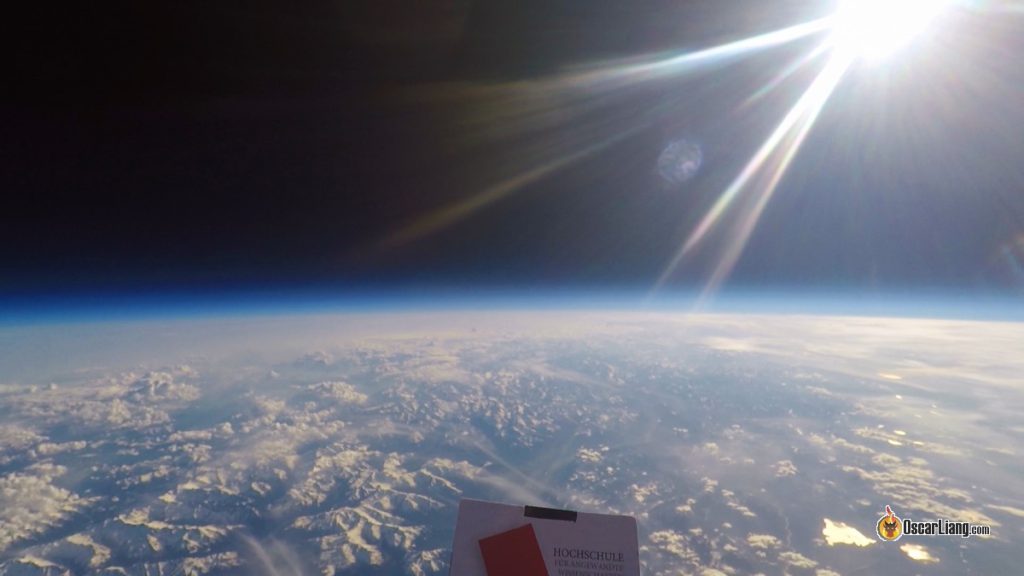 The moment the balloon burst. 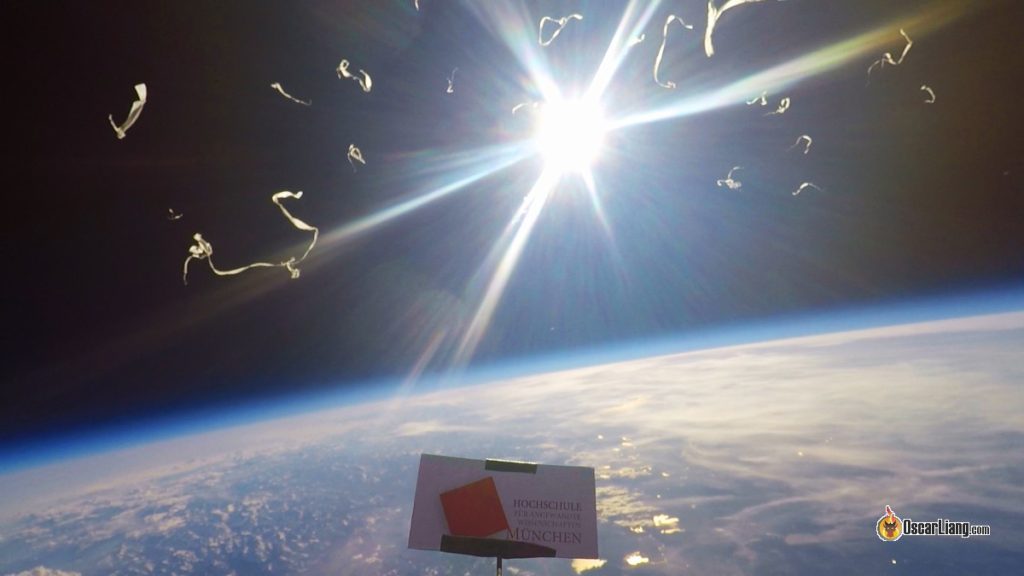 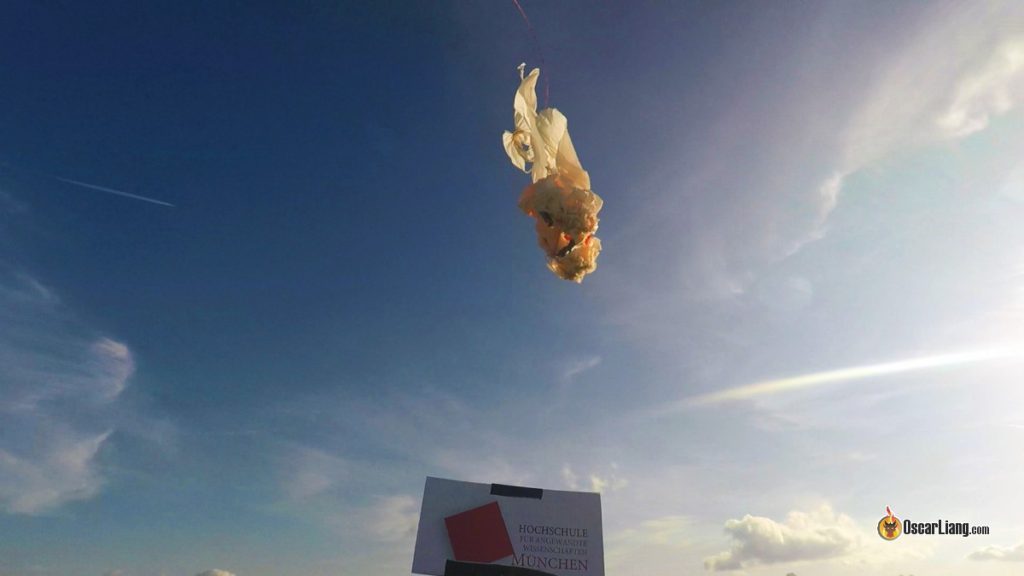 It’s a highly risky and expensive project, but you just have to be prepared for the worst and have faith that things will work out okay :) We were worried and constantly discussing in the group what would happen if the balloon fell into a lake, on the highway, or on the roof of a church, or perhaps on a high voltage power pole…. The chances are low but it’s entirely possible.

Recovering the balloon wasn’t as straightforward as we expected, but it was such a big adventure, and an unforgettable experience.

We thought we would only need €300 to €400 for the project. But in the end it costed nearly €700, mainly because of the multiple times of driving to the landing site. I wanna say a big THANK YOU to the University of Applied Sciences Munich for funding our weather balloon project!

The members of the group project:

Great project and story! Thanks for posting.

This was fascinating read and the footage was incredible! I was really intrigued about the confidence the team had about locating the balloon — calculating the route in order to determine where it would land, I was thinking there is no way it will be that easy. Then I questioned myself — hey maybe they have really accurate information on which to base these calculations. As it turns out it was more like the adventure I expected you guys to have finding it.

Again, interesting read and a welcome departure from the usual read, which I also enjoy!