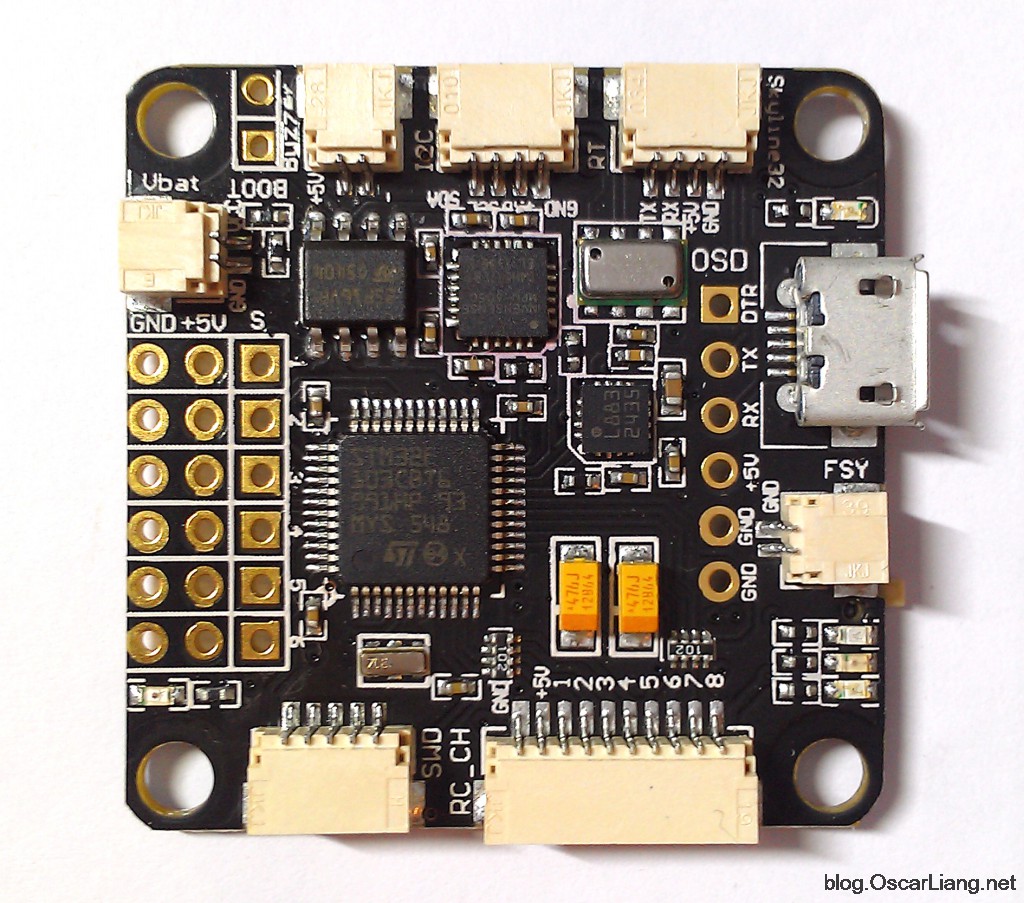 The Skyline32+OSD is a flight controller with integrated minimOSD, it makes OSD setup and wiring much easier. In this post we will take a look at the features and pinouts of this FC board.

Emax sent me these flight controllers to play with, however with the lack of time I haven’t tried them yet on my multicopters. Here I will show you the boards and their pin-outs, and I will give it a more in-depth review in my future build logs using these mini quad FC.

Get your Skyline32+OSD from EMAX: 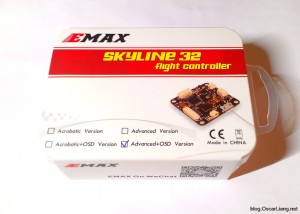 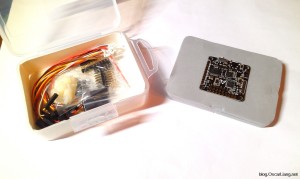 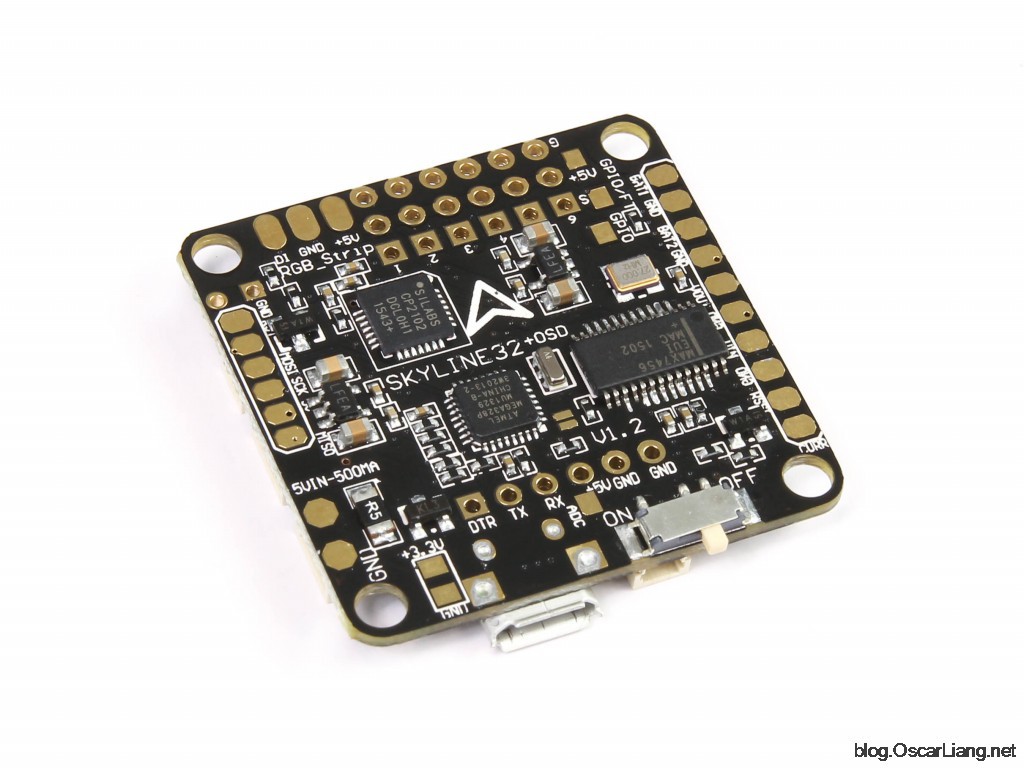 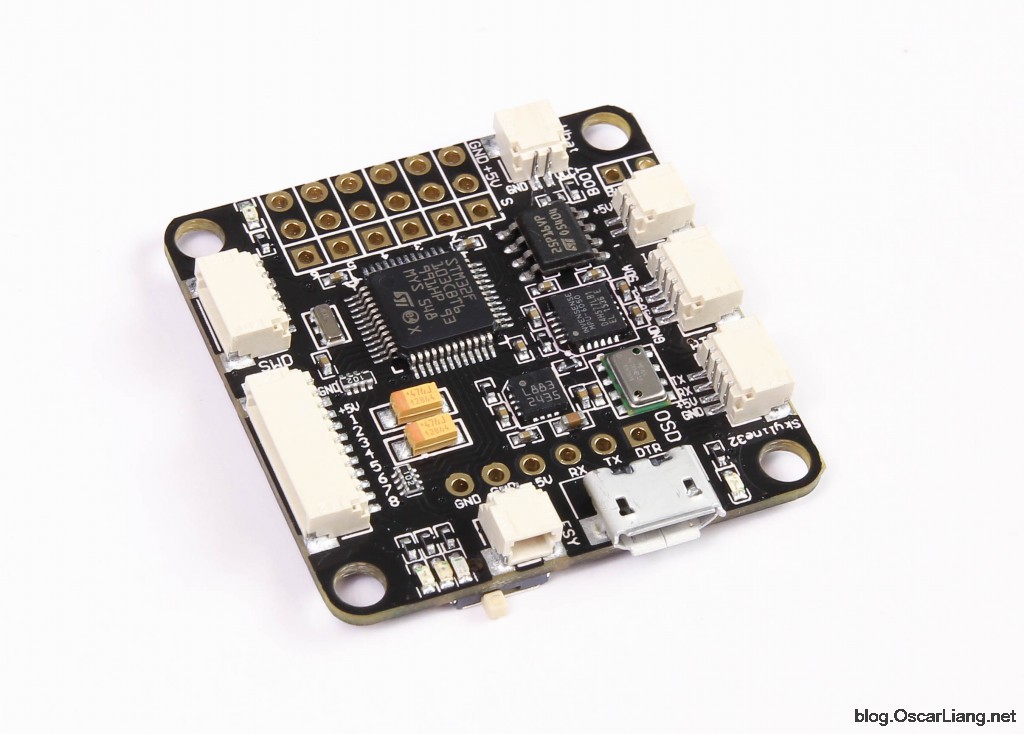 This is the second flight controller that I have used with built-in OSD (the first being the BrainFPV FC). I really like the idea of having MinimOSD integrated into the FC, normally you would have at least 4 cable connections between the OSD and FC (TX, RX, 5V and GND), and it would look quite messy. 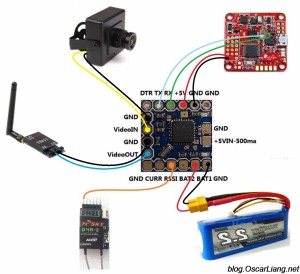 With the Skyline32+OSD FC, FPV camera (Vin), VTX (Vout), RSSI, Current, VBAT, can now all be connected to the FC which makes wiring a lot cleaner.

Not everyone uses OSD though, so this flight controller is probably only appealing to those who have been running OSD.

The OSD is pre-flashed with MWOSD firmware, however if you want to update or flash with any other open source OSD software, you can do so with a FTDI programmer. Solder pads are available on the board to directly access the OSD.

If you ever see “Acro” in the name of the FC from EMAX, it basically means there has no barometer or magnetometer whereas the advanced board does.

As you might know from my previous article about the differences between F1 and F3 flight controllers, the F1 FC only has 2 hardware serial ports, and UART1 is also shared with the USB port which means you will have to unplug the device using UART1, in order to connect to Cleanflight GUI.

That’s why there is a OSD on/off switch I believe to temporally disable the OSD, of course you can also just use it to turn off OSD before flights if you wish. 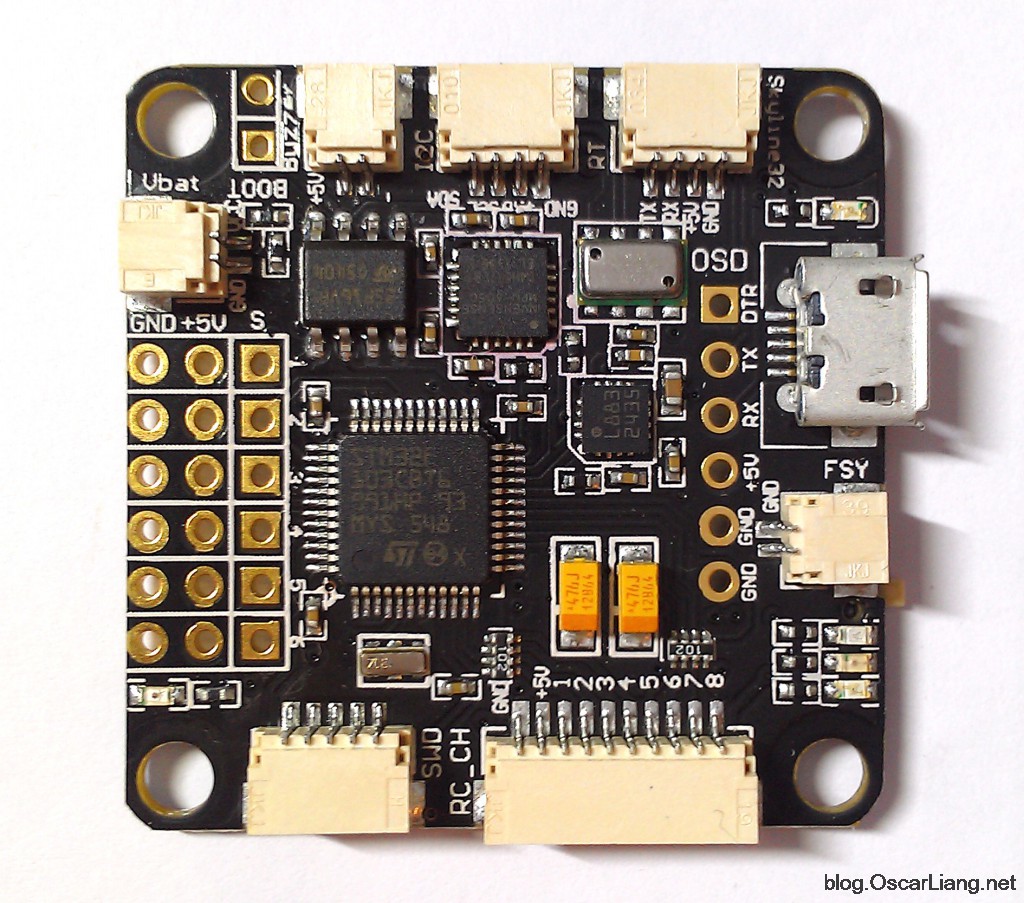 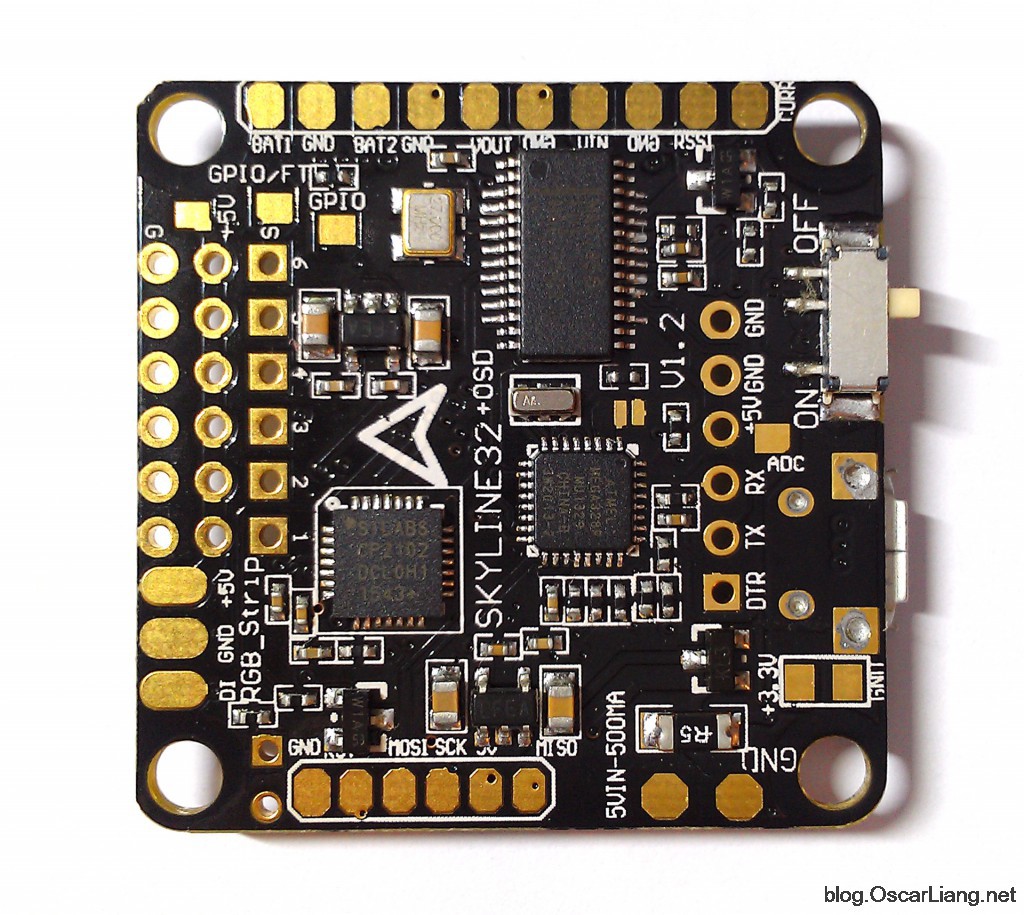 The good news is, you are still left with 1 spare UART if you are using the OSD, and there is flash memory chip onboard so you won’t need it for your OpenLog (blackbox).

I am actually more interested in the F3 version of the Skyline32+OSD. What I received was just a test sample, and it does not reflect the quality, layout or features of the final product. Here are the things that have been confirmed in the final version but not on the prototype board:

It has nearly identical pinout to the SPRacing board by the way, with the extra pins and pads for the OSD. 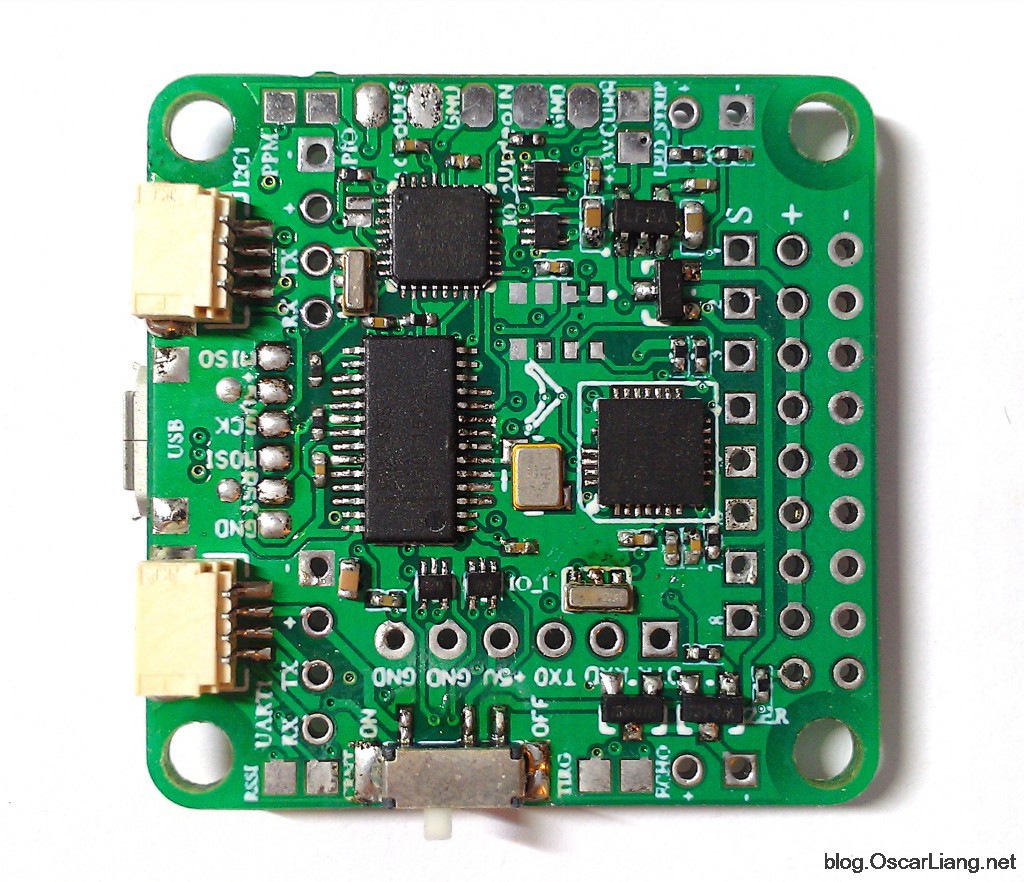 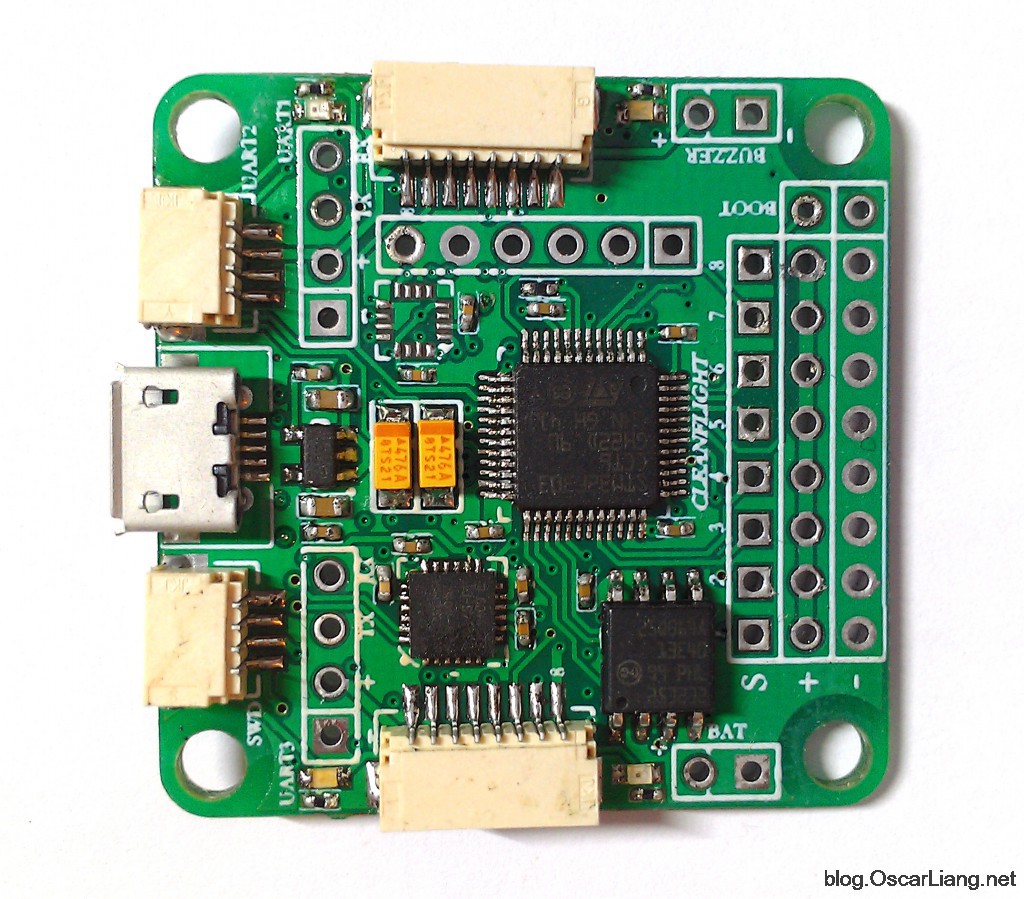 Yes, It’s full of features, which leads to the messy pin-out. It could be overwhelming for beginners, even for myself I still find this board’s pin layout a bit confusing.

The board is packed with solder pads, JST connectors and header pin holes, I just couldn’t read the tiny labels on the board very well, some even has no labels and you need to look up on the manual.

It will put more stress on your 5V power supply, as the the MinimOSD and FC will definitely be powered from the same source, you will need to make sure your 5V power source (either a voltage regulator or BEC) can handle the current draw. Don’t forget other devices that are also taking power from the FC such as the RX. (hopefully this will get better with the dedicated onboard 5V regulator in the final version)

Both FC using MPU6050 but with I2C which limits the sampling rate for faster looptime. Works fine though with Betaflight up to 2Khz mode, not so well with Raceflight.

Which build am I going to use this FC?

I am planning to throw this FC in my 3″ build hehe :) which should be neat considering the wire/space saving for the MinimOSD! Stay tune!

Does anyone know how to connect up and use the current pad? Can we connect a positive wire to the current pad or do we need some sort of current sensor from the battery first?

Can the OSD be configured with a configurator like MW GUI the same as the similar SP LS F3 w/OSD board? Or only threw the OSD with stick movements? Would be nice to be able to customize it.

It’s been a while; is the F3 board available anywhere yet?

hello !
i want to update my old,
how i can do it with FTDI programmer
pls help!!!!

Will the F1 version support a Spektrum Satellite? I have been trying to set this up and when I save it defaults back to whatever it was before.

Hi Oscar,
Have you wired up the F3 OSD Board yet?
I just get black screen.

I have Cam in “Vid in”, Vtx in “Vid OUT” with the gnd wires soldered to gnd pads on flight controller.
Would a Pal Cam have anything to do with it? Im using Foxeer Arrow at the moment.

Same here, black screen. Did you figure it out?

On my Martian II builid i have the same setup, except a flip32 and MinimOSD separately instead of the Skyline32+ OSD with no noise at all.

Please how:
“On the F3 version, it allows you to connect your OSD + SmartPort + SBus + GPS + LED Strip + Battery Monitoring + Sonar + 8 motors – all at the same time!”
on the skyline32 + OSD!!!
breaking my neck on this info!
thanks