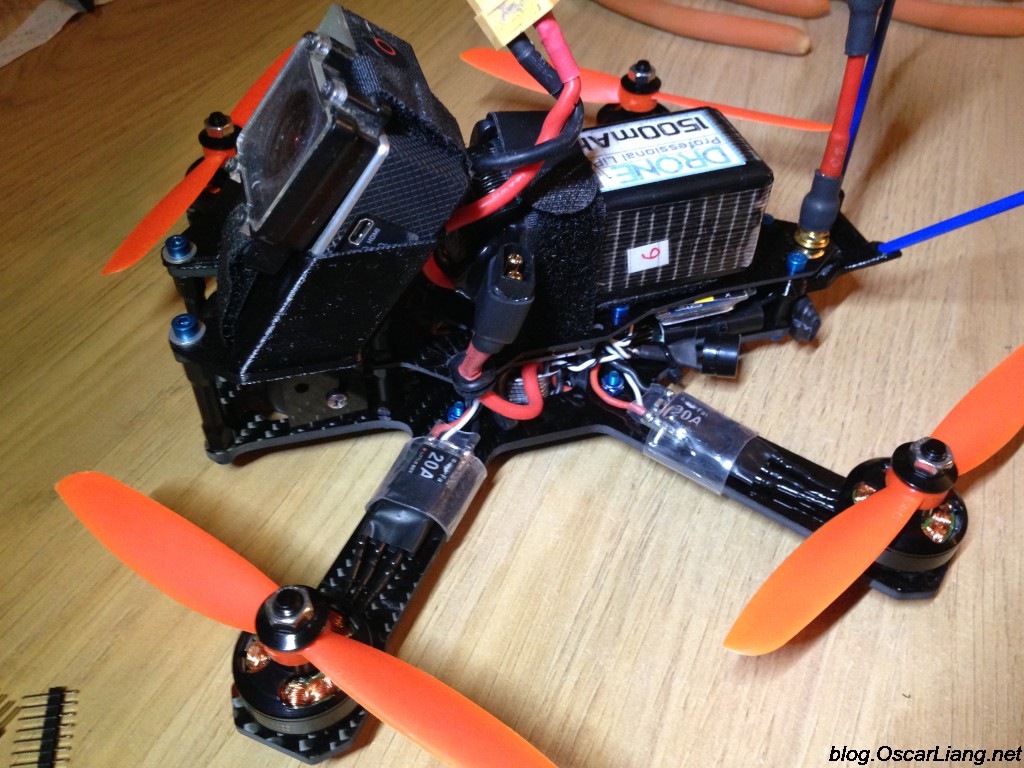 Just going to show you my Speed Addict 210 build, with the most popular setup (used to) Cobra motors, Littlebee 20A Naze32 Rev6, SBUS.

If you missed my review of the Speed Addict 210 mini quad frame, please check it out first.

Originally I was going to use the FPVModel X-Racer F3 flight controller, but I accidentally damaged the buzzer pins as well as the diode on the USB 5V. While I am waiting for a replacement I had to use the Naze Rev6 because I wanted to use SBUS without any mod.

Latest video on this quad

To save weight and keep the build tidy, remove all the unnecessary wires, and wolder the motor wires directly on the ESC’s. 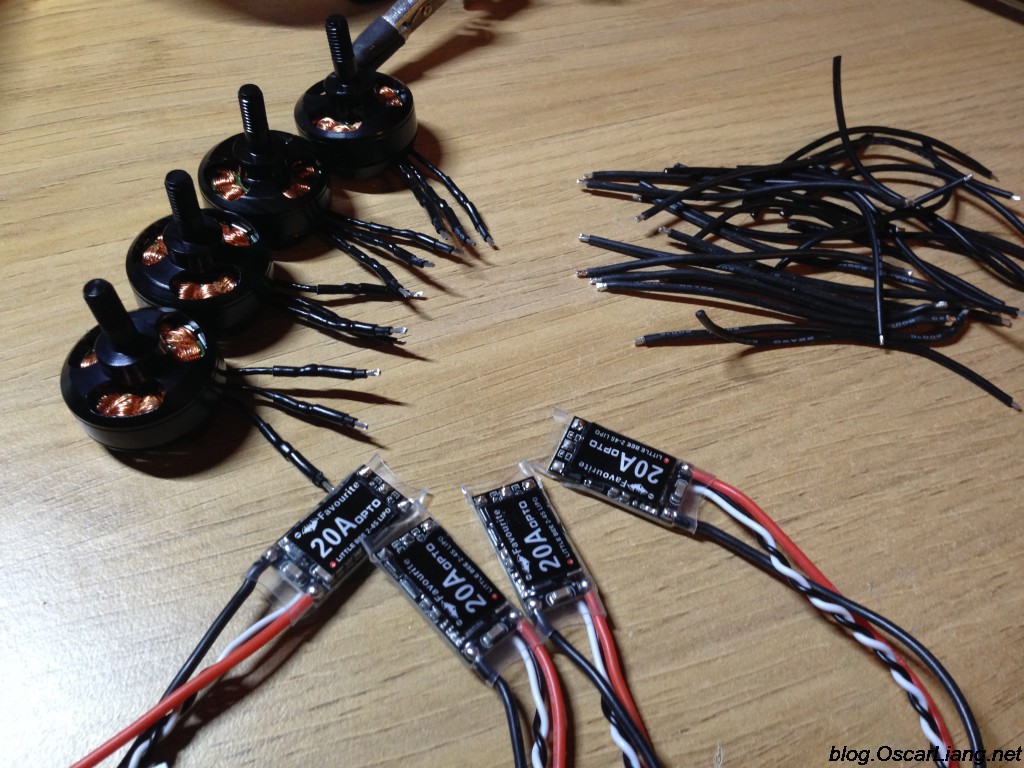 I measured how long I want my LiPo battery XT60 connector cable to be, and made sure it fits in the frame before soldering (important).

The way we solder the XT60 cable on the PDB is different from how we normally do it. This is due to space limitation on the frame, the cable has to be soldered on the PDB vertically. It was actually easier to do than I thought. 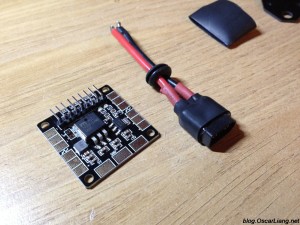 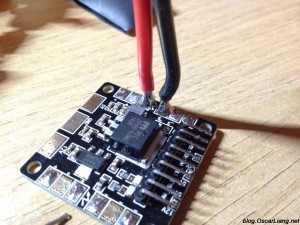 Motor bolts are provided as part of the frame. These are the same light weight blue aluminium bolt used on the frame. I am only using 2 to save weight. (A bit risky though) 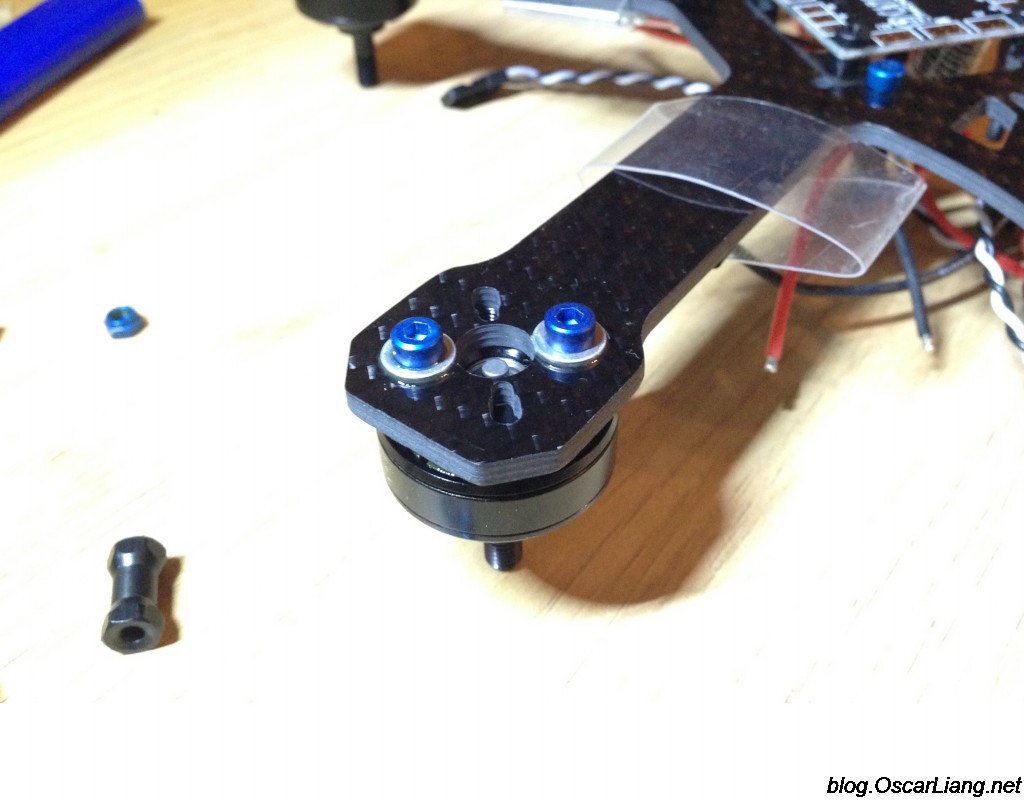 I mounted the motors, ESC’s, and PDB on the frame. 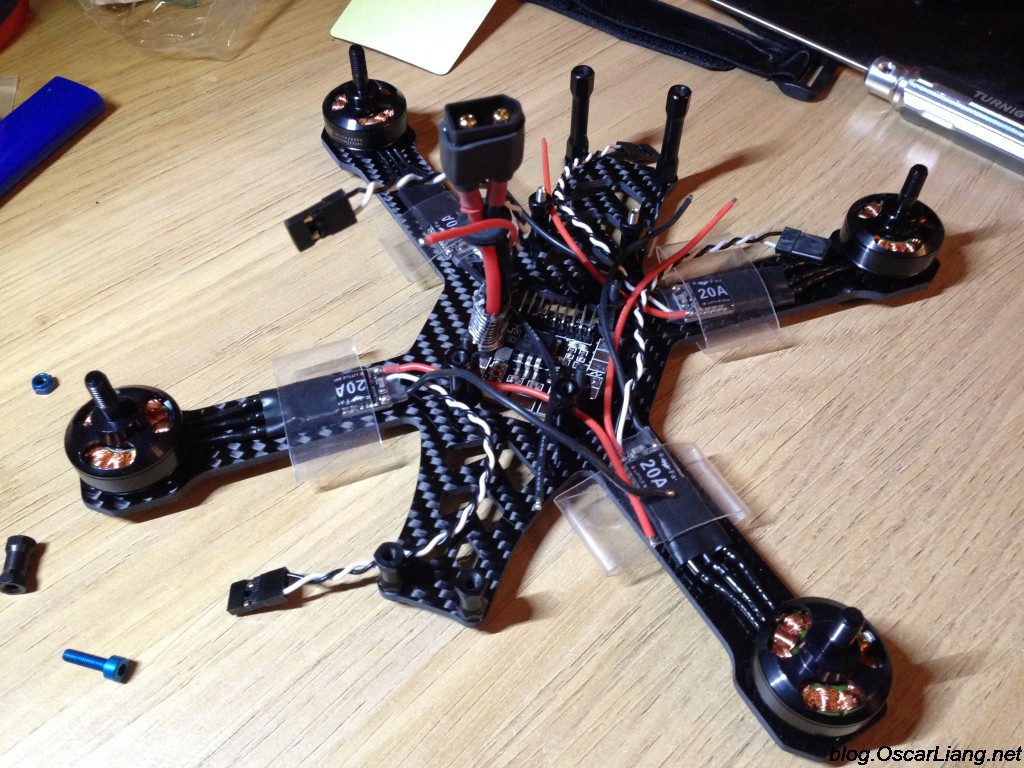 I passed the power wires from the ESC through the gaps, reach the bottom side of the PDB, and soldered them there. 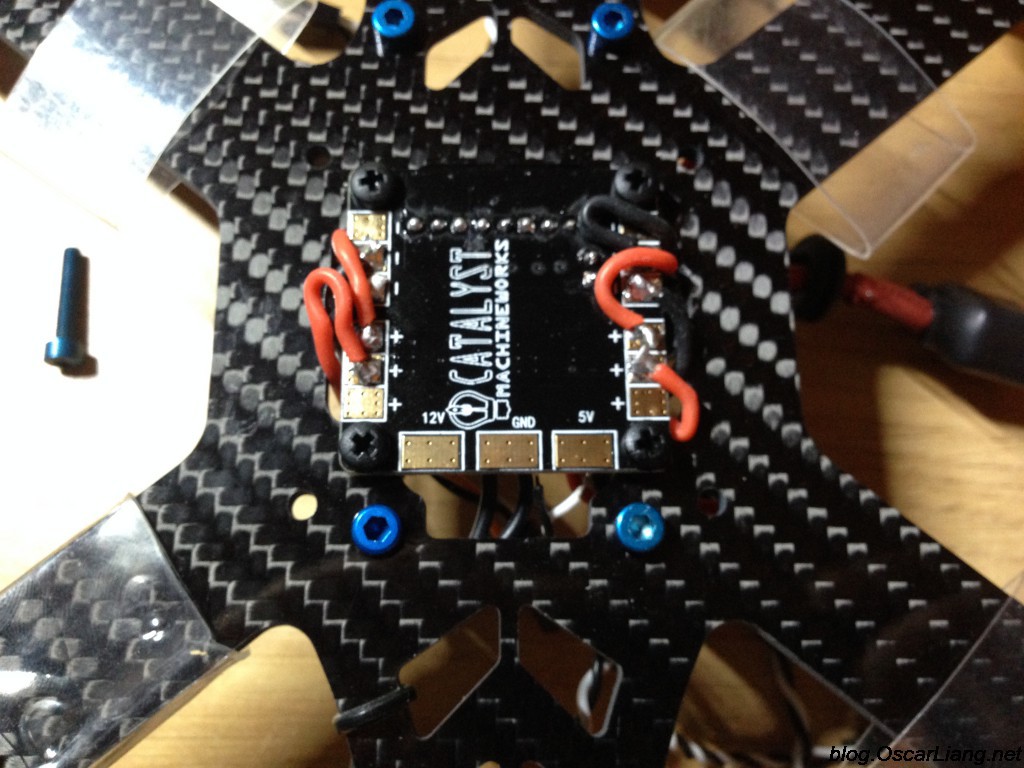 Once the ESC’s are done, I put the bay guard on. 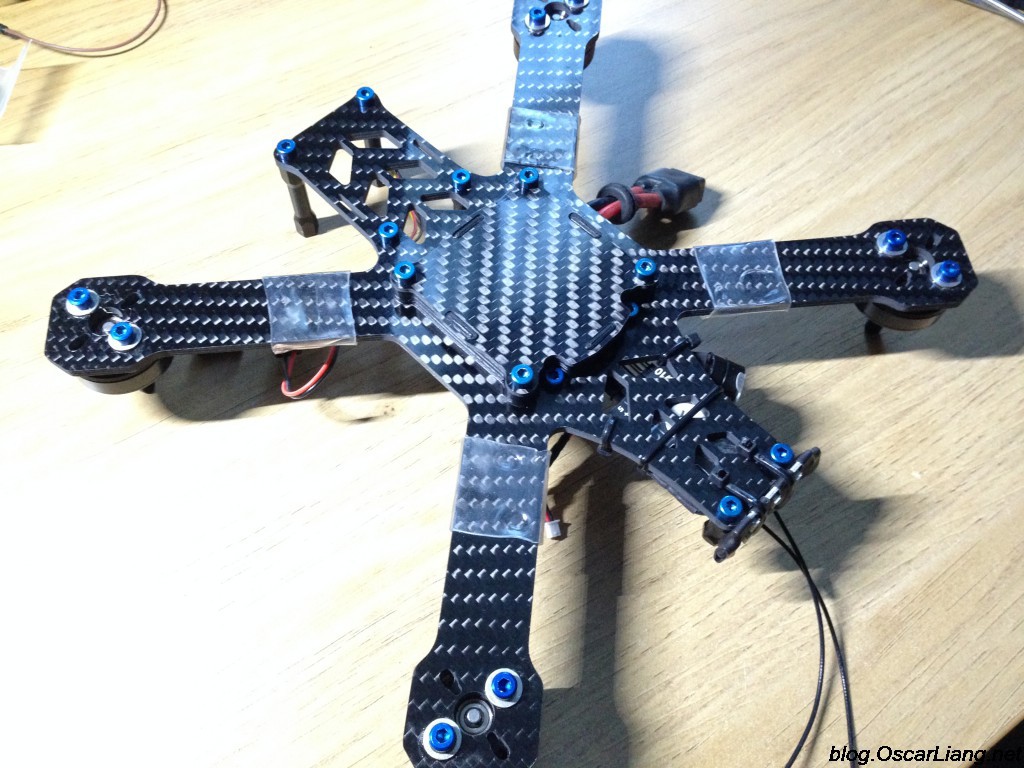 The FPV camera mount provided in the frame is specifically deisgned for this camera i think. I unscrewed the backplate, put the 3D printed mask on with provided silver screws.

The minimOSD will be getting all the flight data from the flight cotnroller, so the solder is minimal on the OSD. I am using a servo lead for the Video in and Video out, which can be plugged into the PDB directly. header pins for the TX, RX, 5V and GND. The extra header pins is the DRT which is used for flashing firmware. 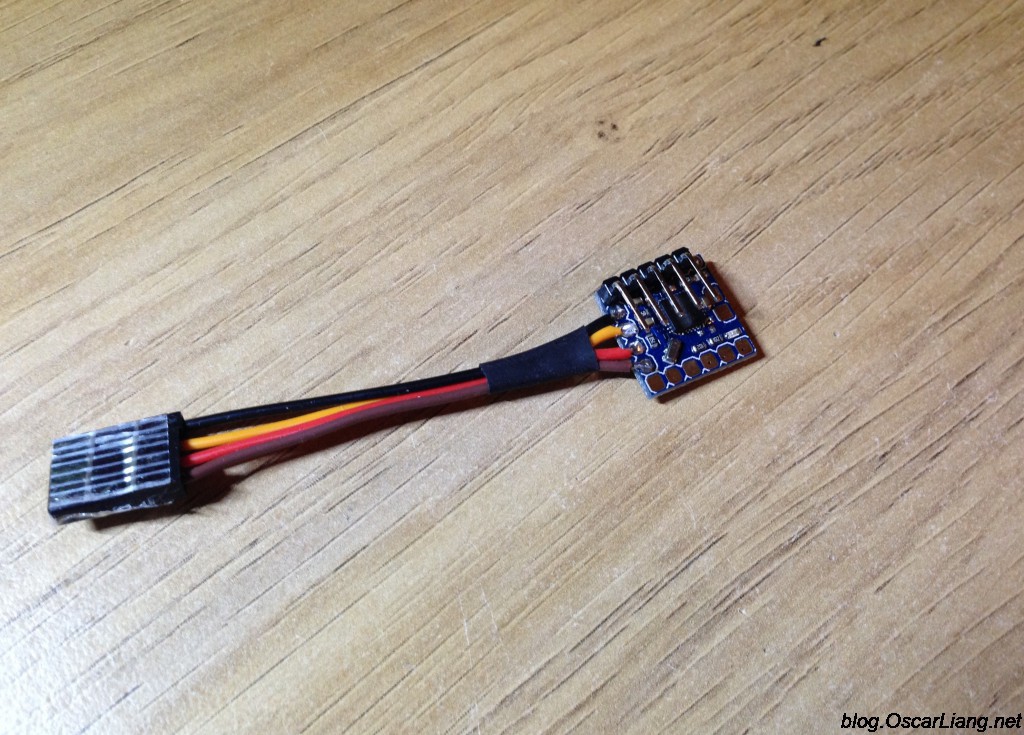 I found a perfect location for my Hawkeye 200mW video transmitter. I think this is a great match. 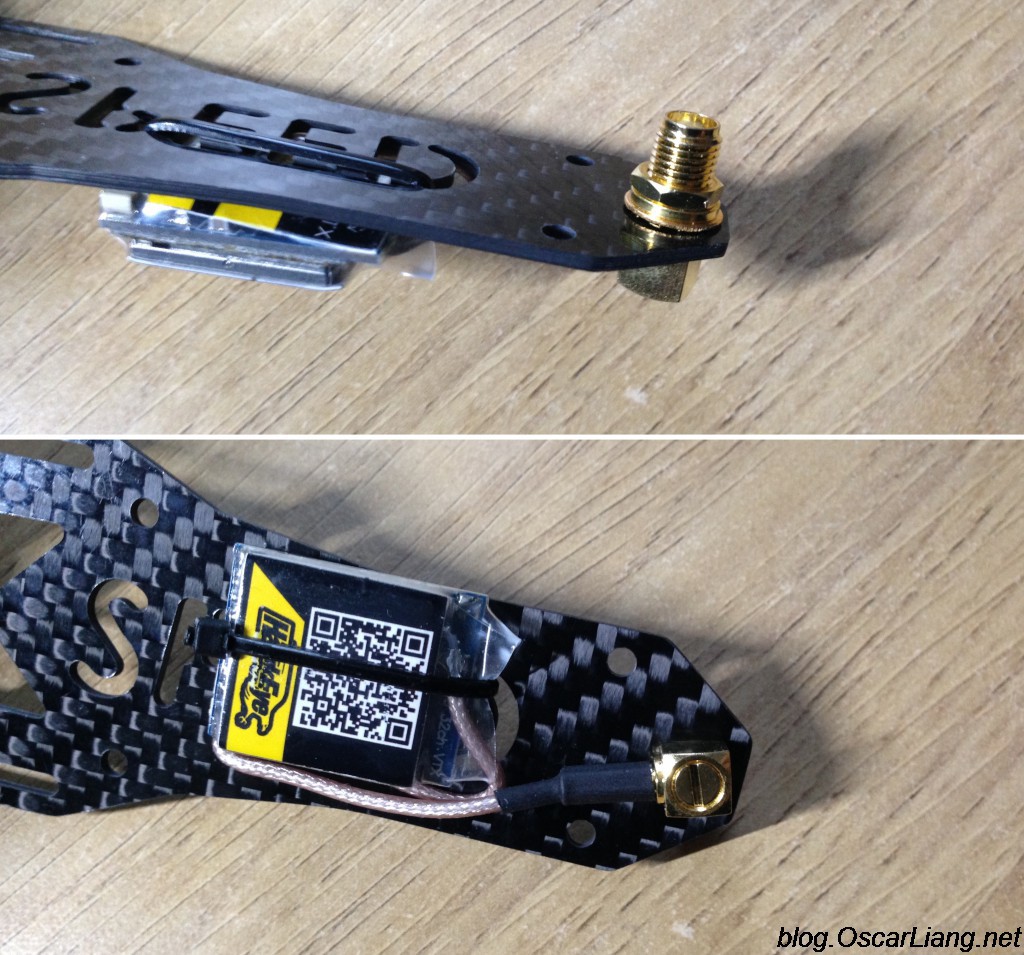 Before I went on, I first tested the 5V and 12V power from the PDB with a multimeter, confirmed I was getting the expected voltages. Then I plugged in all my FPV gear, to check if I was getting video feed. 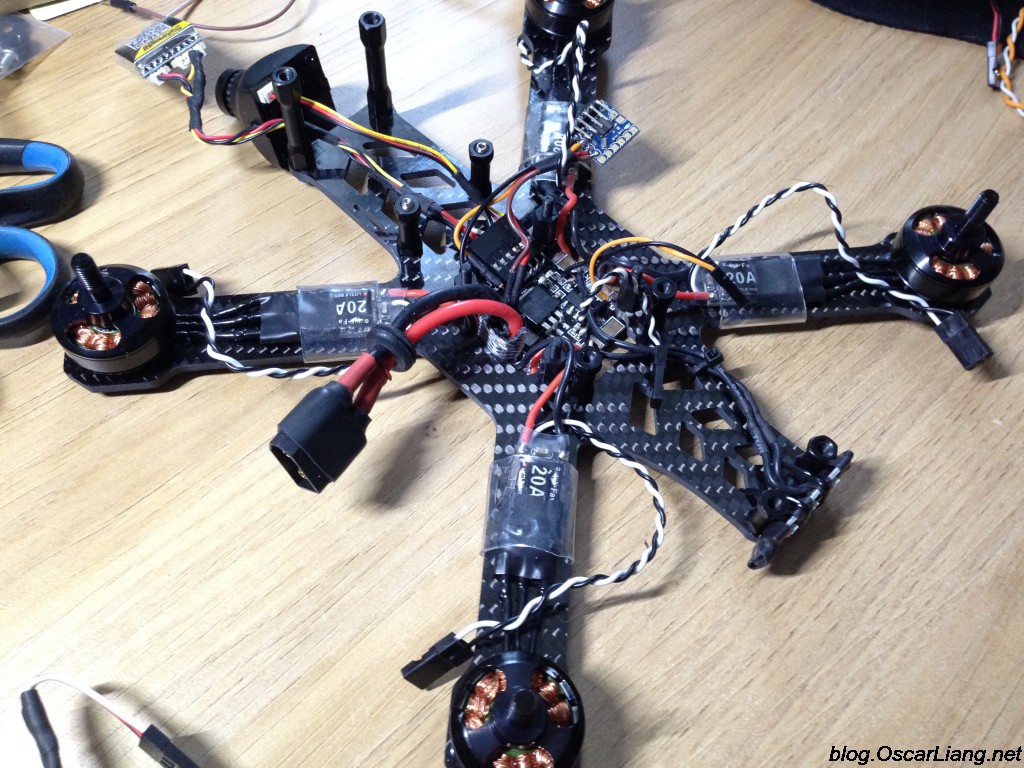 Again, due to frame space limitation, the motor pins on the FC has to be soldered underneath the board. Some people prefer to solder ESC directly on the flight controller, not only saving weight but also space. That’s entirely up to you.

For the SBUS RX input, rather than soldering header pins, I use a servo lead instead. That’s easier because SBUS uses pin 4 which is not next to 5V and GND. 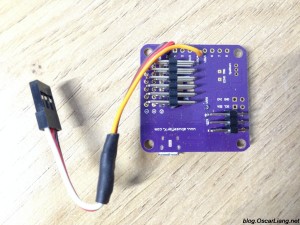 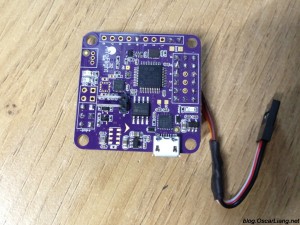 If you are going to race with other pilots, you have to install some sort of LED’s.

I strongly recommend this simple mono colour LED bars. The come in 4 bars in a pack (only $1.5), each with different colour (white, blue, green, red). Most importantly they can be powered directly from 4S! Making the wiring much simpler. I use them on all my builds. 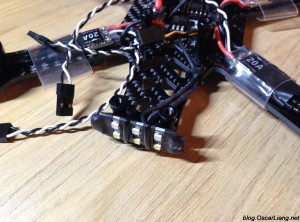 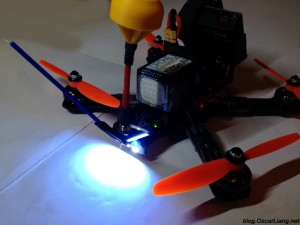 They are super bright too.

This is the recommended place for your RX either X4R-SB or D4R-II. it’s a perfect fit. 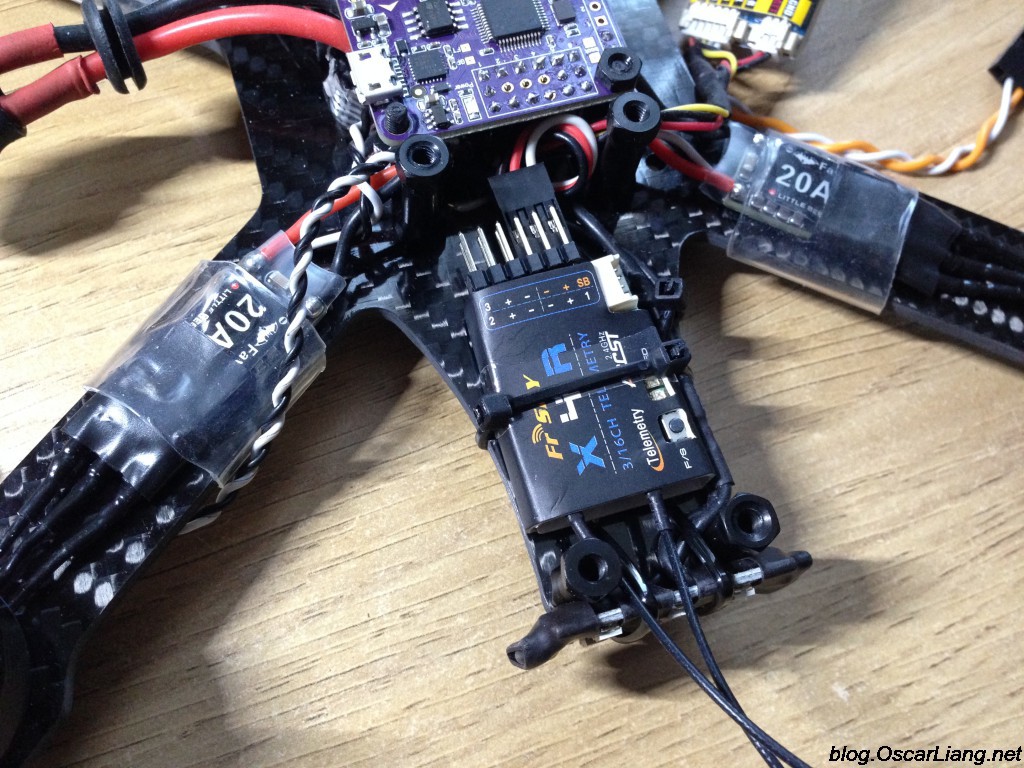 As I pointed out in the review, the blue plastic tubes are just too long, making it difficult to fit in my case and backpack. So I decided to cut them shorter, and flipped the excessive antenna around and secured it with heatshrink.

I would probably have kept it longer, to get a better radio reception and less chance of having the signal blocked by Carbon fibre frame. But flew it a couple of times now no signal issues so far. 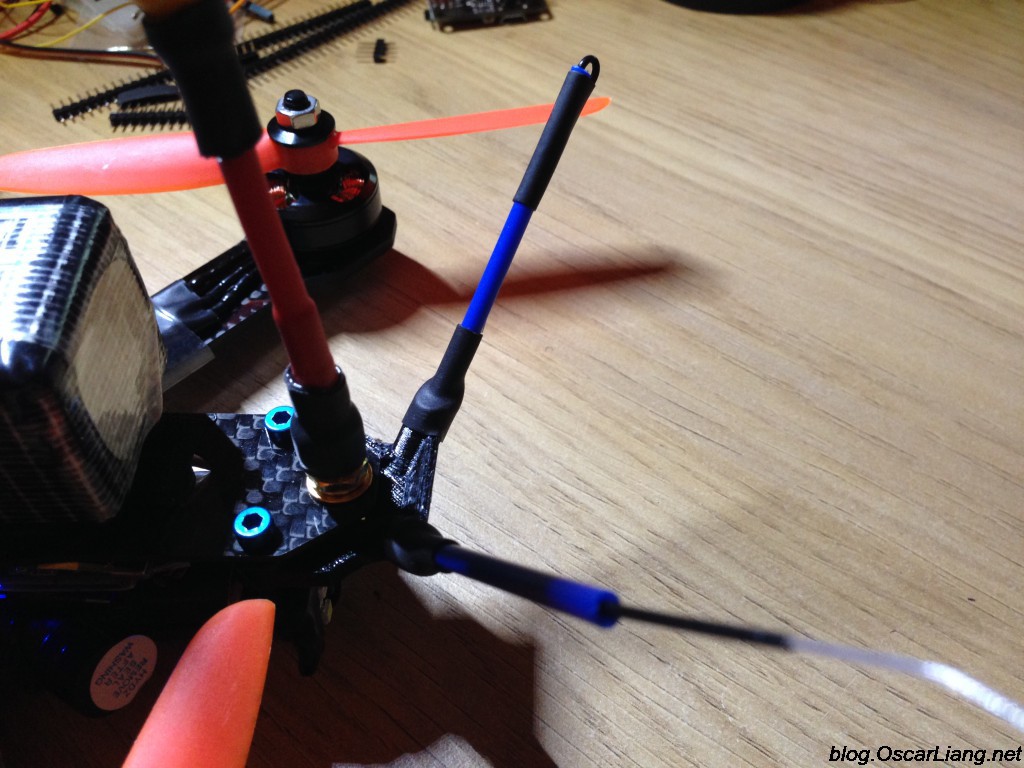 We have installed all the guts, so it’s time to put the top plate on. 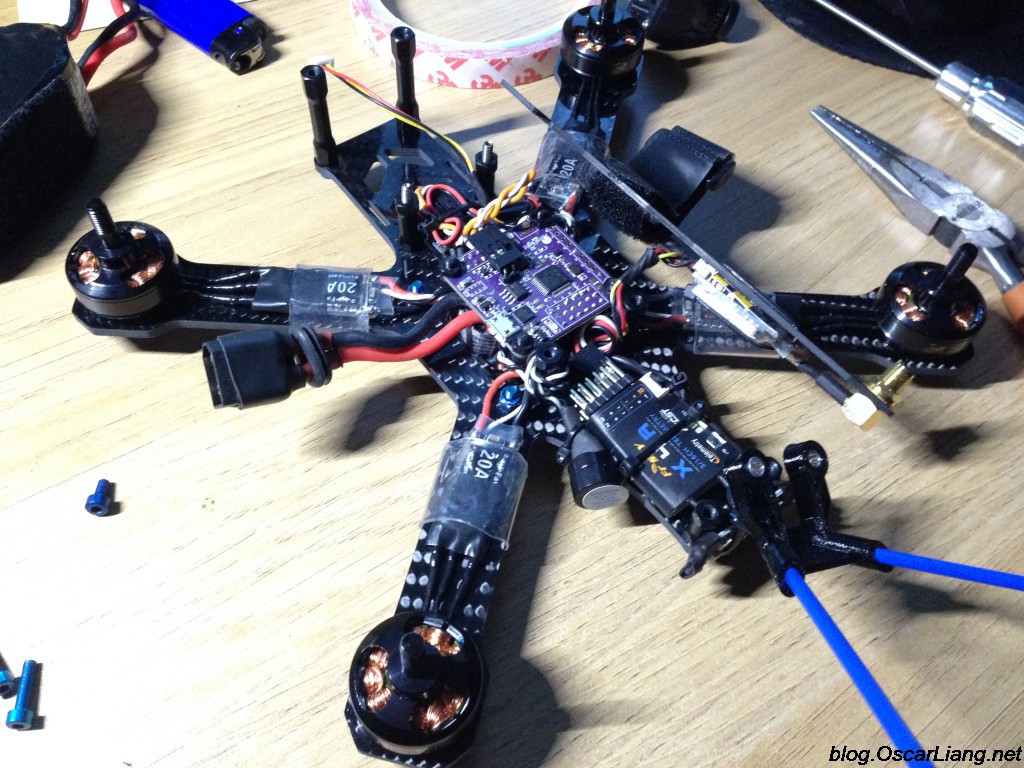 As well as installing the FPV camera.

I really like this way of mounting the camera. The tilt angle on the camera can be changed by hand. Once you found your desired angle, you can fix with 2 screws on both sides. But on mine, there is enough friction between the camera and the frame, it actually holds the angle really well without the screws. Yet I can still move the angle by hand. 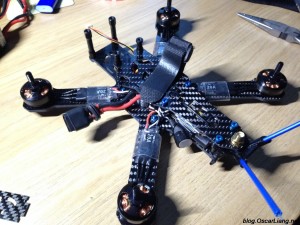 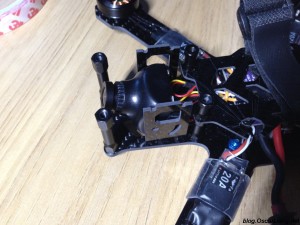 And finally, putting the gopro mount on this frame. Very clever design, and nice job on the vibration damping cells. 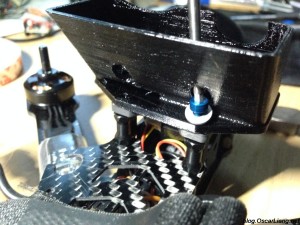 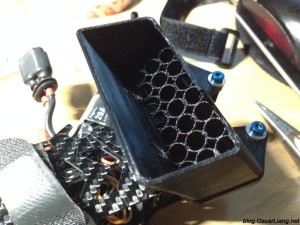 I am planning to use Gemfan 5045 non bullnose propellers on this build. A bit less power than the bullnose, or triblades props, but would be a lot more efficient and giving me longer flight time :) But the main reason is that I have too many of those props, and didn’t know what to do with them hehe. :) 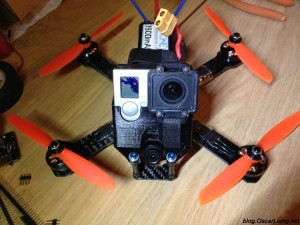 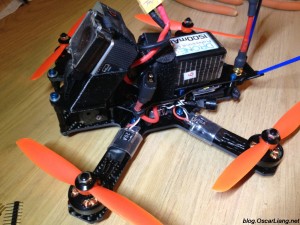 And you can see this is really a tight build, literally no space left hehe. 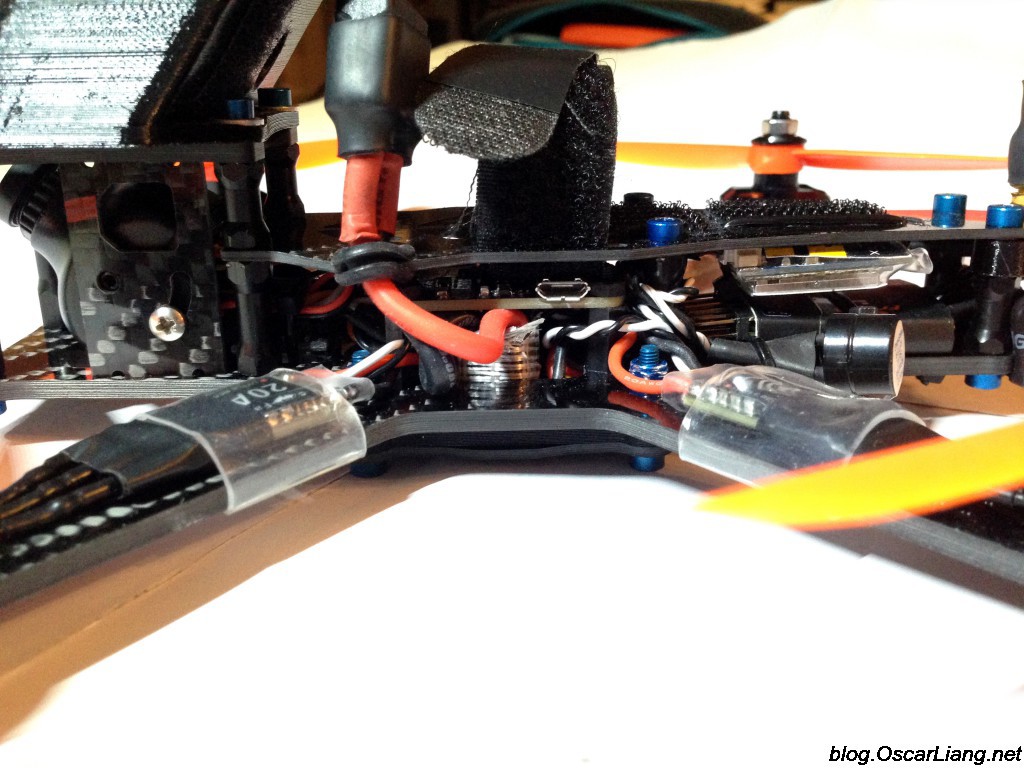 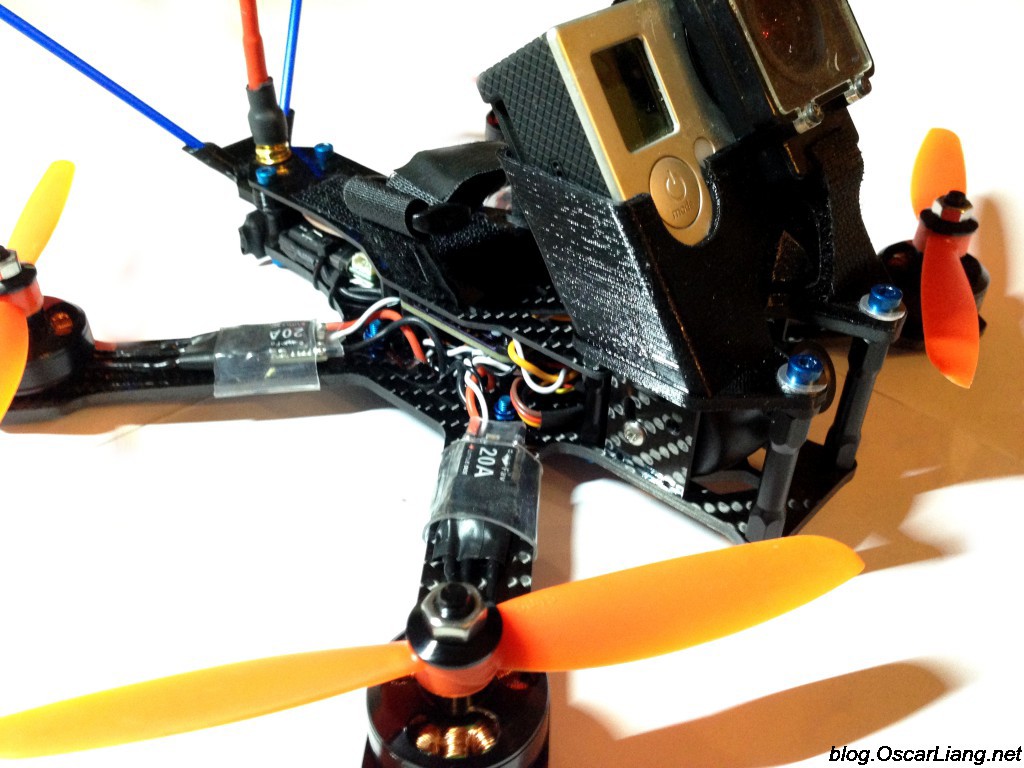 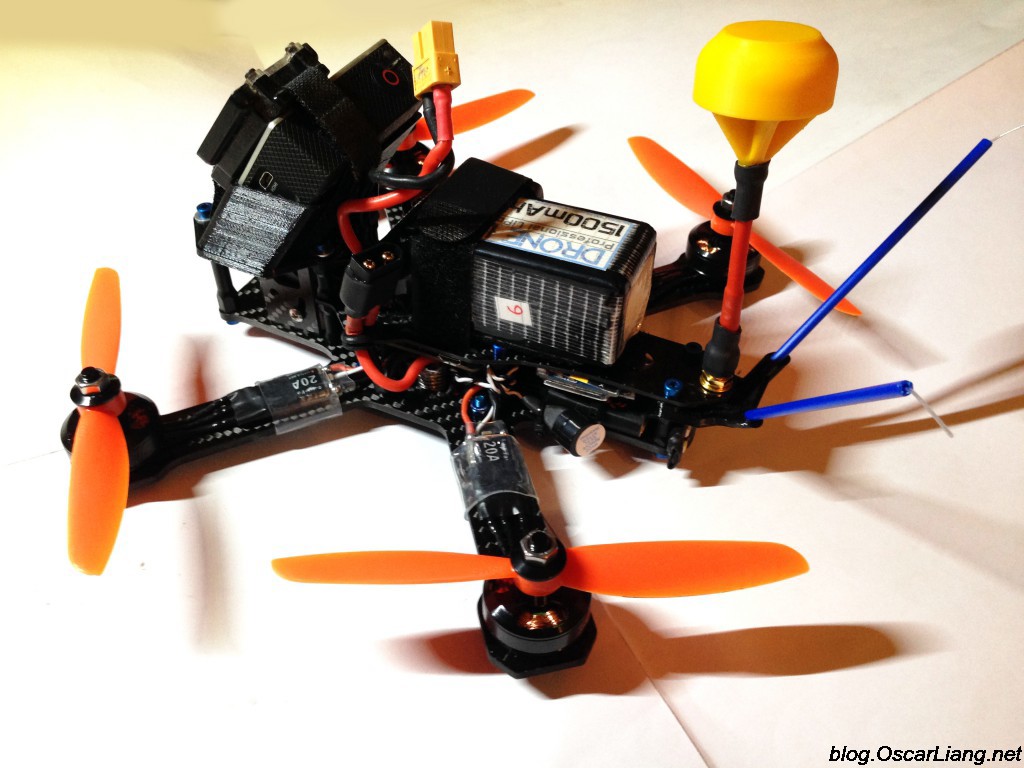 A few thoughts after the build:

Here is my first flight with this quad, still got lots of tuning to do. I am also finding this quad a bit harder to tune than my previous builds. Mind you this is the first time I use a Naze32 Rev6 with Betaflight, so it could be that.

I am seeing lots of vibration in the gyro traces in blackbox, I think some of us in the multirotor community has concluded that the MPU6500 give very noisy gyro data, causing the mini quad harder to tune and lower PID values. (most FC’s use MPU6000 or MPU6050, only the Rev6 and LUX F3 use 6500)

I was using 2Khz mode originally, but it’s just impossible to get rid of the oscillation so I would have to move back to the good old 1Khz and so what happens. Here was the discussion on this issue.

Or it could also be the 3mm bottom plate not being stiff enough, Neill is going to send me the 4mm plate to compare.

Anyway, ultimately I want to get rid of the Rev6 and install the XRacer F3 on this quad.

(27/Feb/2016) So… I swapped out the crap Rev6 and now we are talking! XRacer F3 is great apart from no VBAT… I am using MinimOSD to read voltage at the moment, but apart from that it’s all good!

Can you tell me where I can get the 3D front file of the CCD mask? Thank you!

all 3D printed parts came directly from Catalyst… so i am not sure, maybe ask them?

Oscar, I saw your flight video, and wanted to ask how you do such fast yaw spins. Every time I try to do that I get some pitch/roll component, so the yaw spins turns into a wobble. Any thoughts would be greatly appreciated.

when doing fast yaw spin, I normally put in some roll as well to make it spin faster… and it will look more stable too.. it will take practice.. and depends on your rate… my yaw rate is 1.1 by the way

Hi,
“I was using 2Khz mode originally, but it’s just impossible to get rid of the oscillation…”

Have a try on some SiLabs F390 ESCs and using 2KHz mode.
Like this UBAD 30a Angry-Beast Mini-ESC.

The camera mounts we sell sit at 35 degrees.

thanks Neill, sorry i should have checked that first. corrected now.

Oscar, what ports did you use (soft and hard serial) to get sbus, minimosd, AND led working?

Did you have to disable the accelerometer to get everything under 1khz?

SBUS goes to pin 4 (UART2), MinimOSD goes to TX/RX (UART1)… the LEDs are not programmable ones, so they don’t need data connection..
with 1Khz, you can leave ACC on… but i disable it anyway just to get a more reliable looptime :)