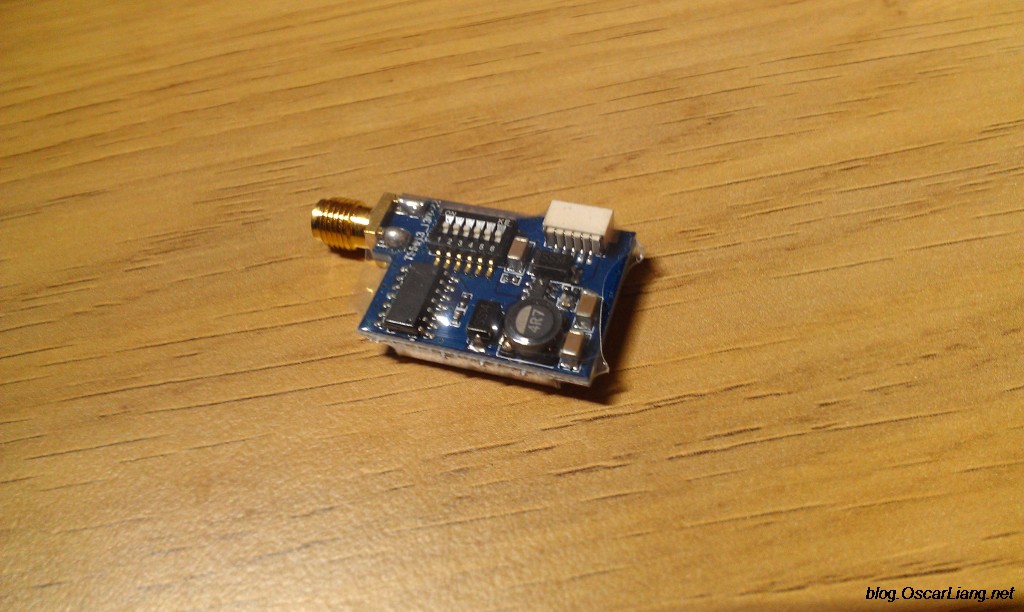 When I received this TS5823 video transmitter, I was surprised by how tiny this vTX is compared to other commonly seen 200mW video transmitters. Not only it is with the advantage in size, it also supports 32 channels (4 different bands) which covers the channels used in equipment from Fatshark, ImmersionRC, Skyzone, Boscom and so on. Allowing a wider voltage supply is also a great feature in this mini video transmitter.

Check out this guide how to get into FPV. 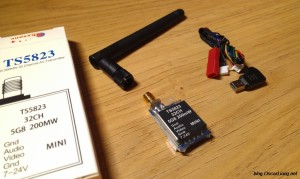 Here is a product description from the seller: TheTS5823 transmitter packs 200mW of ultra clean 5.8GHz power in a micro sized video/audio transmitter! The TS5823 transmits a full range of 32 channels and only weighs 10g. It’s perfect for a wide range of aircraft, especially small models and 250/330/350 size multi-rotors such as Night Hawk 250, DJI Phantom, QR X350 and more! 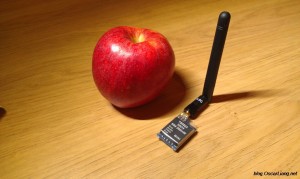 However there are incidences which might be linked to the quality control of this product, where people discovered their units powered up and has jumping white lines across the image, which looks to be from poor filtering in the power supply or some sort.

Also there are people complained about the voltage regulator (which converts input voltage between 7V to 24V to its working voltage) being too weak. It could get too hot after running for a while, one guy even had his burned.

I personally haven’t found any of the above issues with mine yet (except for the fact that the module does get a bit hot, but not to the state it burns). I range-tested my mini TS5823 video transmitter, which I achieved just over 600m, with the same gear/antenna used on the ImmersionRC 600mW vTX (on which I could get to 1.2Km).

Here are some of the Features:

Here are is the manual that came with it. 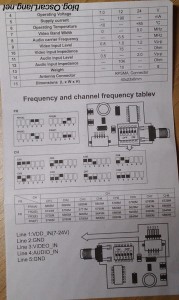 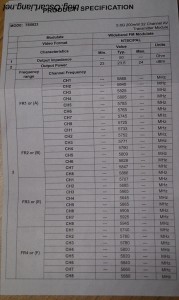 A Youtuber David Price did a range test on this vTX, and he got 980m, but that’s because of the limit of his 2.4Ghz radio. He reckons he can reach 1.5Km with this vTX. This is his test video.

Thanks for your tips about this blog. A single thing I want to say is purchasing consumer electronics items from the Internet is not new. Actually, in the past few years alone, the market for online consumer electronics has grown a great deal. Today, you can get practically any specific electronic unit and product on the Internet, ranging from cameras as well as camcorders to computer components and video gaming consoles.

Still searching, still confused. I would like to connect Cam (Runcam) and VideoTX directly to 4S, to avoid another source of troubles (BEC). Possible, or not? It seems, I simply need to test it…

which runcam do you have? read up on the spec, see if it’s supported by your battery voltage.
there is also noise to consider, with a BEC and LC filter they reduce the noise introduced into your power from ESC/motors.

What battery did you use? Cause mine keeps getting toasty to the point that it will burn my finger in less mthan a minute.

Hi Oscar,
I’m having difficulty getting this VTX to work with the RC305 RX. The receiver works great with the 1000Mw VTX it came with, however that VTX is rather large to fit on a ZMR250 airframe and it sticks out the back quite far. Frankly, I’m surprised it hasn’t bought the proverbial farm yet from crashes. I’m using CP antennas but can’t seem to get much more than static on any of the channels. I’m no pro when it comes to FPV gear and matching frequencies but I understand dip switches and how they work.

Hi Oscar. First of all congrats for your blog! It’s been very helpful all along my drone project! And second I was wondering if it is possible to connect a 200mw transmitter to a 600mw receiver? I know the channels have to match with each other but apart from that would they work?

Thank you and have a great day!

Thanks :)
receiver doesn’t have “mW”, only transmitter does.
In theory you should be able to pair any 5.8Ghz TX with any RX as long as they share some same channels/frequency… power shouldn’t matter.

I’m new to fpv and I’m a little confused and don’t know if the TS5832 transmitter will work with the Fatshark Raceband 5.8Ghz receiver module?

Confused because this VTX uses an RP antenna and the RX uses a RHCP antenna.

Could I use another type of receiver module on fatshark dom hd 2 googles?

yes it will work. Don’t worry about antenna, it’s the frequency bands you need to worry about.

yes this one should be able to handle up to 24V as stated in the product spec.

Hi Oscar,
Great blog, I’m using this transmitter and I was just wondering if you could tell me what’s the channel with the strongest signal as I have no tools to test it? Thanks a lot.

The channels don’t matter that much, but the 5750-5850mhz channels should work the best since they are best fit for your antenna assuming it is tuned to 5800mhz.

Nice blog Oscar! On which channel did you do this range test? There’s a video on youtube where someone tests the output power and channel 34 was the strongest: Part 2: :New Boscam 32 channel 5.8GHz kit ,power levels.: youtu.be/cGcXUJAQ6lQ my own testing seems to support this.

Could you help me choose what video receiver and antennas should I pair with this one? I’d like to purchase it on banggood. I’m looking at the Boscam RC805 and at the Boscam RC305. Not sure what the difference between those are or if an 8 channel receiver even works with a 32 channel transmitter. Ugh, so confused. I would very much appreciate your help. Thank you.

Hi, since this receiver supports all four bands (A B E F), you can just pick any receiver that covers any of these bands. For more info on frequency bands, check this out:
https://oscarliang.com/5-8ghz-frequency-bands-b-e-f-different-brand/

I would recommend just try your stock antenna for now, see if you are happy. If not, you can go and pick some “Circular Polarized” antenna, the good ones can usually give you double of the range, but very expensive.
Go to the antenna section, there are already some options for antenna and receivers there: https://oscarliang.com/250-mini-quad-part-list-fpv/

What Camera where you using to film the video ?