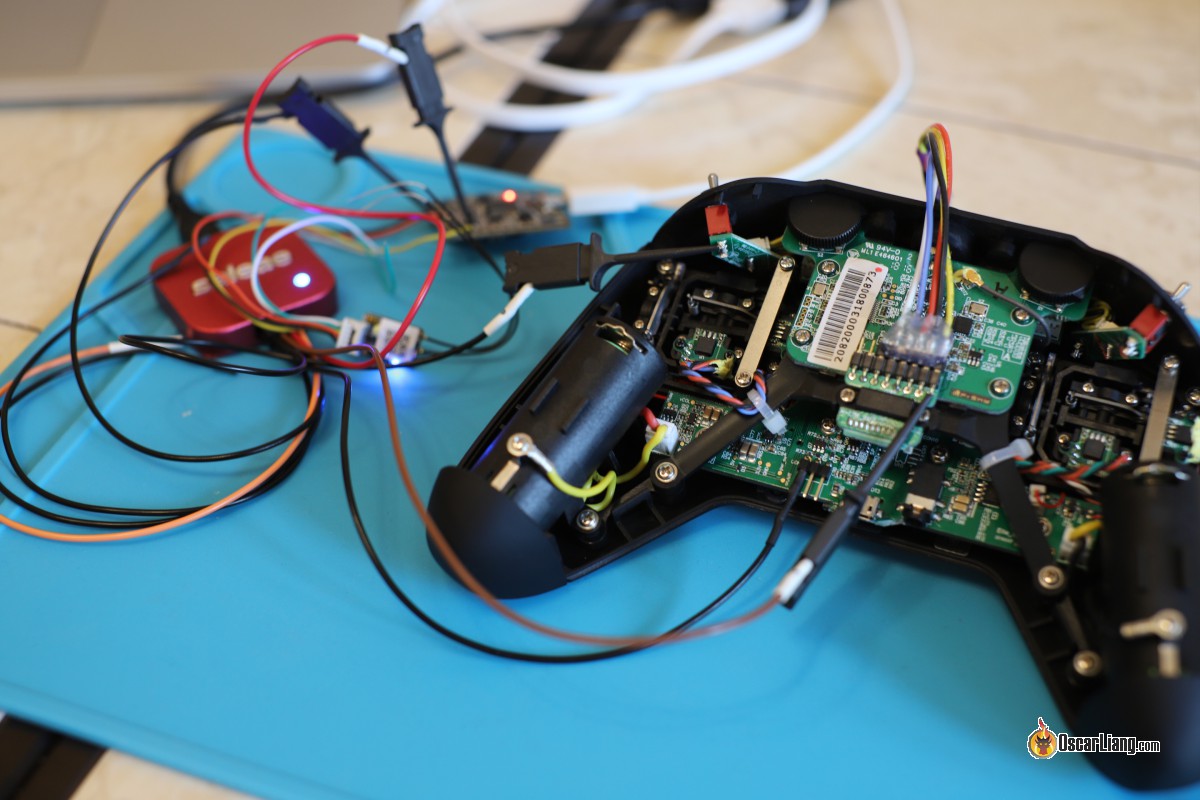 During the latency testing on the Frsky X-Lite, we discovered some interesting results. There is delay in the gimbals, (how often the gimbal value is being updated), and additional delay caused by OpenTX’s sample averaging.

The testing was done by Andrey Mironov, with his permission to share the results here.

The Hall Effect gimbals in the X-Lite output PWM signal of fixed frequency, like the Horus X10S and X12 (note: not all hall gimbals output PWM).

OpenTX is using a weird scheme for sampling this PWM signal from the gimbals. It’s a 6-sample moving window for filtering, which we found to introduce considerable amount of delay.

Looking at the OpenTX code, we found out how it works: it accumulates 6 values, min and max values are then subtracted and the result is the average of the remaining 4 values.

This filtering introduces a varying delay depending on the pattern of the input signal, which effectively increases delay by 1 to 3 samples.

Therefore the latency caused by the filtering in OpenTX would be 3.85ms – 11.54ms.

Low quality analog gimbals might have noisy output, and the sample filtering can help smooth that out. But it’s my understanding that by using PWM gimbals, such filtering is no longer necessary. Let’s hope this get removed/fixed soon.

Note that this filtering only applies to the sticks and not the switches.

For the sake of testing, Andrey built a custom version of OpenTX which doesn’t do this 6-sample filtering. He was testing with the built-in iXJT module in the X-Lite, and an XSR receiver with the latest EU LBT firmware, in D16 8ch mode with telemetry on.

First test consisted of tapping into the pitch gimbal line and generating a 260 Hz PWM signal with a STM Discovery board, altering between 10% and 90% duty cycle every 128 milliseconds, while observing the resulting SBUS frame over the course of 60 seconds. 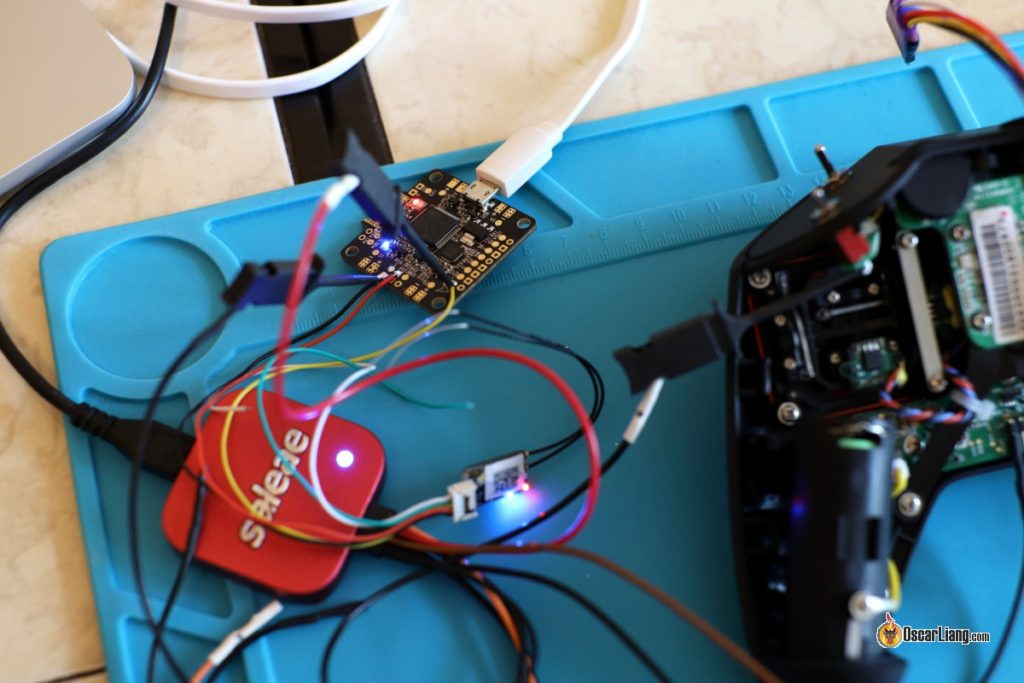 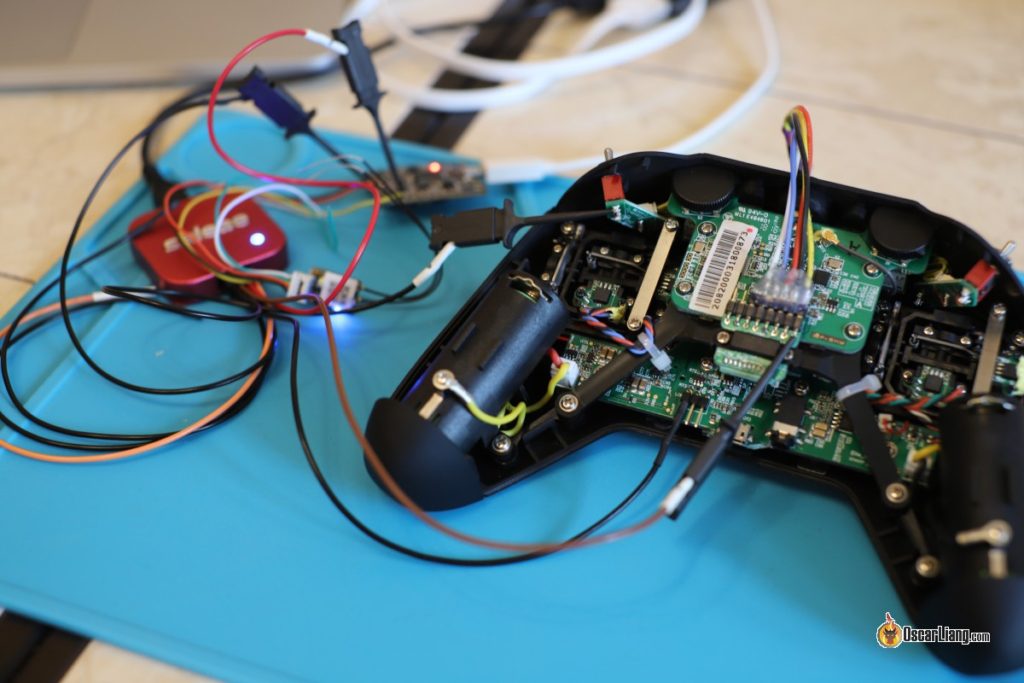 The Latency between Gimbal and SBUS Output

Latency is measured between the falling edge of gimbal PWM signal and the start of corresponding SBUS frame. This doesn’t take SBUS frame length (slightly less than 3 ms) into account, so keep that in mind.

The Latency between Switch and SBUS Output

The same test was repeated by tapping into one of 2-POS switches and flicked it on/off for 60 seconds at 120-250 ms intervals. In the future we can generate varying-frequency PWM signal instead of using the physical switch to avoid stressing it :-)

Due to addition of human factor this test had a higher entropy of switch on/off times and resulted in a lower max value, but the remaining values are incredibly similar.

The resulting values of 20 ms average latency and 12 ms minimum seem to agree with what FrSky advertises on their site and in X-Lite manual. Though it doesn’t take SBUS frame length into account.

The interesting consequence of the 6-point averaging is, on X-Lite (and probably Horus X10S) your switches will have less theoretical minimum latency than you sticks.

Here is the latency testing for the R9M-Lite module, and we confirmed it’s on par with theTBS Crossfire :)

All captures for Saleae as well as Python script used to produce the results will be posted on Andrey’s GitHub shortly.

How to dispose Lipo Battery | Old or Damaged Lipo

Hi Oscar, you say Andrey made a custom version of OpenTX without the filtering; any chance of this being made available? Thanks

What conclusions can be drawn from this? Is there a comparison to the x77 and x9d?

Hi Oscar, I am Pato from Argentina. When I looked at the code, I realize that the timer_capture_values[][], probably take 1 value at a timer interrupt and this array is a LIFO.
The filter , for (i=0; etc… only make a math which could take microseconds, and no miliseconds as you believe.
It is the delay for this filter could be less as a milliseconds.
Please check it
Regards

This array is a circular buffer for a performing 6-point averagingz the delay comes from filtering not from the code running slow.