Quadcopter VS Helicopter – Why not Scale Up, Full Size Drone 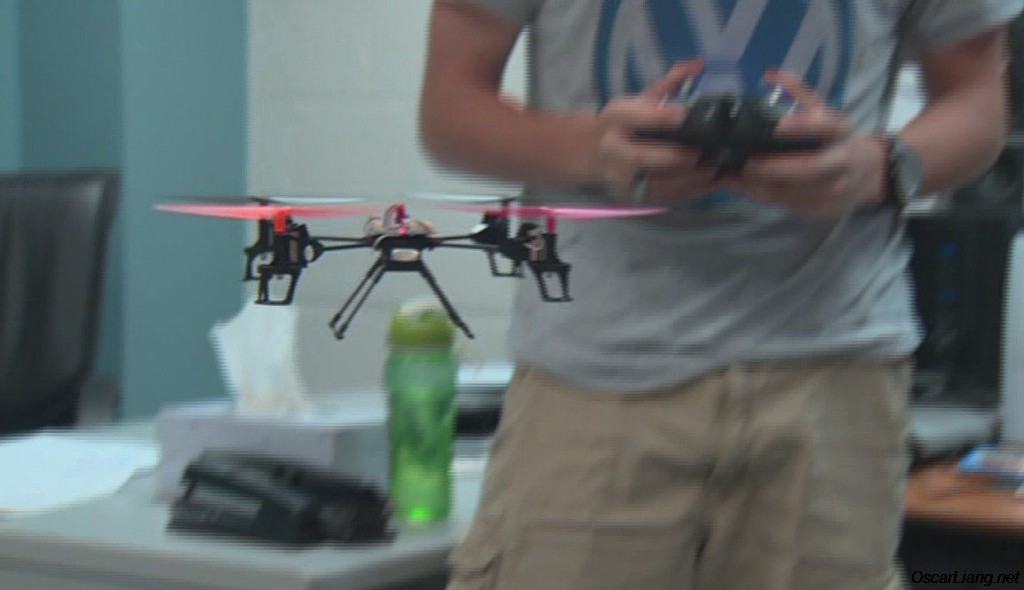 Quadcopters and other multicopters are getting popular in RC hobby and scientific research. One of the main reasons might be the simple mechanical structure.

Regular helicopters have 1 big motor and a small tail motor, while quadcopters have four motors. Many small size quadcopters seem pretty agile and easy to control, in fact they are generally less stable than an helicopters. Quadcopters and other multicopters are also LESS efficient. 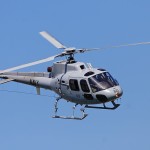 Can quadcopter be scaled up to carry out tasks like full size helicopters, for transportation for example? 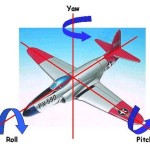 Quadcopters has four motors which uses four fixed pitch propellers. Mechanically this is very simple compared to what the helicopter has. Along with the compact electric motors powered directly by battery, the simplicity makes small size model quadcopters more popular in RC hobby. But when it comes to full size aircraft, things gets more complicated in the  such as whether to have four engines in quadcopter.

Here is a picture of the helicopter blade pitch mechanism. 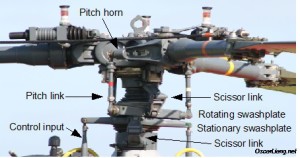 A small quadcopter motor with its fixed-pitch propeller. 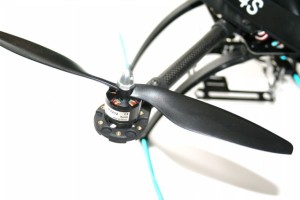 Quadcopters are less stable than helicopters. That’s right! They might seem pretty stable in many small hobby models, but that’s the Flight controller and speed controller doing all the stabilization for the pilot. It would be extremely hard to fly a quadcopter without the asistance.

Flight controllers are getting better and better it’s amazing how well it’s working. It leads to the misunderstanding that quadcopters are more stable than helicopters by nature.
For the quadcopter to maintain balance, each individual motors must adjust speed to change thrust. If motors on one side are spinning faster, it will generate more thrusts and the quad will tilt to the other side. Because quadcopter relies on changing the speed of the propellers to make yaw, roll and pitch movements (3 dimension movements), how fast it can change the motor RPM (rotation per minute) determines how agile the quadcopter is.

Apart from the electronic speed controller, this is also very much depends on the inertia of the propellers. As you can imagine, generally the bigger and heavier the props, the harder it is to slow down or speed up. Therefore that contributes to the less agile and unresponsive characteristics of a large quadcopter. Just like stopping a bicycle is easier than stopping a train. :)

As mentioned, when quadcopter is making movements, the rotation speed of the propellers and motors need to change. Helicopters’s varying-pitch propeller mechanism is a more efficient solution, because it takes more energy to slow down / speed up propellers than keeping the motor and propeller at a constant speed.

Basically, to be more controllable and stable, the more frequent the motors change speed, and therefore the less efficient it will get. This is why you don’t get much flight time out of a quadcopter generally.

Finally The larger your rotor disk is, the less energy wasted in moving the mass of air. You also don’t have air flow interference from adjacent rotors / propellers in helicopters. This is why long flight time quads tend to use large propellers. (But again, they are less agile)

When disaster happens such as loss of power or motor failure, quadcopters might spin around or flip sideway, because the quadcopter can only be balanced effectively when all four motors are working. On the other hand, helicopters tend to just glide down to the ground vertically.

Although quadcopters are less stable and efficient than helicopters, they are more suitable to be made in small form factor. they are more mechanically simple and also cheaper to make. When they are scaled up, the disadvantage becomes more significant too.

Excellent article explaining all the pros & cons of quadcopters versus traditional helicopters. The best argument I see here for quads is basically as only for small form factor non-critical use (e.g. in parcel delivery or hobby craft) whereas traditional helicopters will still be the preferable human-scale transport where safety is considered.

Most amatuer engineers think that more engines/rotors is better based on the flawed assumption that you get more “backups”, but there is a cost of various interferences with using too many parts (e.g. airflow interference between rotors / mechanical stability / loss in efficiencies etc.)

More rotors basically means a higher failure rate and there is no “backup” support since the quads will spin uncontrollably and/or fall like a rock even 1 of the 4 rotors fails. In contrast, traditional helicopters can do a standard procedure called “autorotation” where they can glide gently to safety using essentially the remaining momentum of their failed main rotor. This is another case where engineering physics is counter-intuitive to common perception.

The more rotors you add, the more unwieldy / unstable / inefficient aa system becomes.
I’ve seen some companies making prototype quadcopters “air taxis” to ferry humans using 8 or more rotors (because they needed “backup” of another 4 rotors, in case 1 of the rotor fails. In the end, the cost, maintenance & safety issues ended up equal to just going back to a traditional helicopter design :)

I recall this mis-perception of “more being better” is also the reason why the Russians failed the race to the Moon because they were using a rocket with too many small engines, leading to unreliability and persistent harmonics issues.
jalopnik.com/this-insane-rocket-is-why-the-soviet-union-never-made-i-1448356326

Excellent and complete explanation!
Maybe the best configuration for “quads” would be 3 or more propellers mounted on each of 4 laminar wings that turn to a horizontal position like a plane like an Osprey.
Could this beat a rotative wing (helicopter) flying at leveled flight?

What will happened if 2 propeller are placed in right angle to any 2 propeller out of 4 propeller of quad copters.
Like ? helicopter but in such a way so it will push or pull coming air.

Full scale helicopters DO NOT have a smaller motor to drive the tail, the tails are shaft driven.

as i consier, if we use the fan blade type structure on front side of the drone and when the drone moves forward it automatically rotates the fan blades and the energy produced by the rotation( just like our wind turbine energy ) is used to charged the batteries………what u say guys

that’s just resistance and it would slow down the drone, to go at the same speed you will have to go faster and use more energy in the end, as the regenerative energy efficiency is lower than 100%.

The efficiency argument / reasoning maybe true in other respect but I don’t buy the acceleration/deceleration argument in relation to efficiency. Surely acceleration needs energy but that energy is not lost, instead it is stored in the rotor as kinetic energy . And it is not lost in deceleration like in a car, it is not like there were brakes to convert the rotational energy to heat.

Aditionally the larger rotor is more fuel-efficient. A heli lave cca 35% more flight-time! Lust because the propellers are larger (you know: more grams/W the larger the propeller is)

I still can’t understand how big quadrocopters builders for human transportation sole problem with autorotation. One of four engines fail – you are dead. Helicopter has advantage: if engine fail you can land easily (I did it in R44 by myself!).
Why nobody is looking for that problem and building E-hangs and other big quads?

E-hang will never see commercial deployment. Rather a helium filled UFO type things with passengers dangling like fruits would be the air taxi of the future. You see , everything is gentle here. you crash gently, you move slowly etc. Did I hear “woah thats so safe here ” ?

You would not have to rely sole on batteries for a scaled-up quad to replace a helicopter. A small gas engine would run a generator to charge the systems batteries like how train engines work. Also, to make it safer you would want six or eight motors so if one fails it’s not a lost issue. The nice thing you can do with it is install a ballistic chute system because the blades could be out far enough so as not to interfere with the chute. It has been tried many times on helicopters and even so far as using ballistic bolts that hold the rotor on to try jettison the rotor, so the ballistic chute could deploy. Personally, I think it is the way it will end up going. Also pound for pound the multi rotor can lift much more.

Respectfully disagree. Helicopters have how many moving parts versus 4 moving parts in a quadcopter? The controllers are getting better and so is the battery technology. No it will not be perfect but way less variables. Also, training time and ease of use and when you get autonomy… This, folks, is the future. Probably not quads but definitely multirotor.

Like all newer technology, something else will show up. So, it may not be a quad, maybe the main rotor will be mounted on top like the helicopter, and the stabilizer blade will be two on the sides or front/back or over the main blade, or none at all. Since it hasn’t happened yet, it is anybody’s guess.

Well done, I appreciate your explanation.
It’s interesting to see folks like Larry Page are still bullish on the idea despite greater chance of catastrophic failure, lack of efficiency, battery limitations, etc. Perhaps it’s just about hype or maybe they see enough upside given the relative simplicity and cost-savings potential of a scaled-up multi-rotor.

Amazing write up, and really cleared up my question.. I guess we may never really see full size Quadcopters.