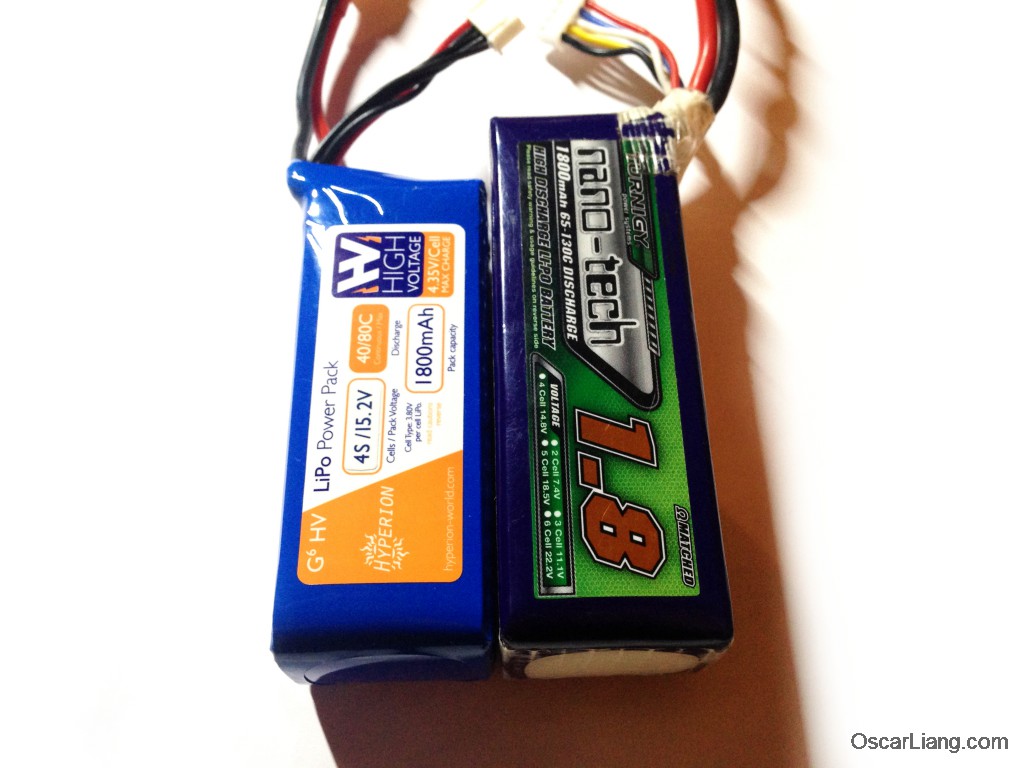 We have been hearing good things about LiHV batteries, which is reportedly better than traditional LiPo, especially for mini quad racing. I ran some tests and tried to find out which battery is better.

Many thanks to Aircraft-World.com for sending me the Hyperion HVLi batteries for testing.

What is LiHV battery?

LiHV (or HVLi) stands for “High Voltage Lithium Polymer”. It’s a similar to LiPo battery but allows you charge it up to 4.35V per cell safely.

When you charge LiHV batteries like standard LiPo to only 4.20V per cell, they perform pretty much similar. However when you charge them fully to 4.35V per cell you get the following advantages:

Can you charge your normal lipo to 4.35V?

So you might wonder: “can I over-charge my normal lipo to higher voltage like 4.30V or even 4.35V, to get more power and longer flight time? ” The answer is NO!!! That’s extremely dangerous and very likely to cause fire because of the different cell chemistry.

Some chargers don’t have HVLi as a battery type, but allows you to charge up to 4.3v/cell. Still, It’s best to have a charger that has a setting for LiHV specifically, for example this IMAX X150.

You should NOT charge HVLi together with standard lipo, when you over charge LiPo over 4.2V per cell you might get a fire. Chargers are unable to detect whether you have plugged in HVLi or normal LiPo so be extra careful not to mix them together.

HVLi Batteries I am testing 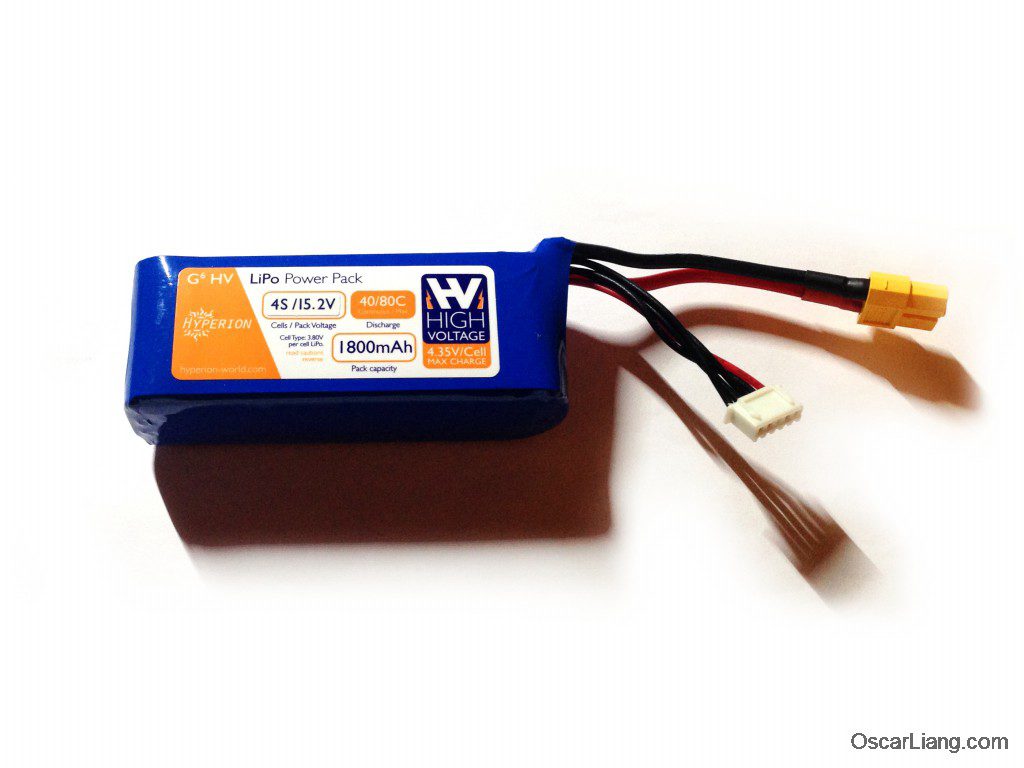 When comparing to normal LiPo of the same capacity, LiHV’s are smaller and lighter due to the higher energy per weight. 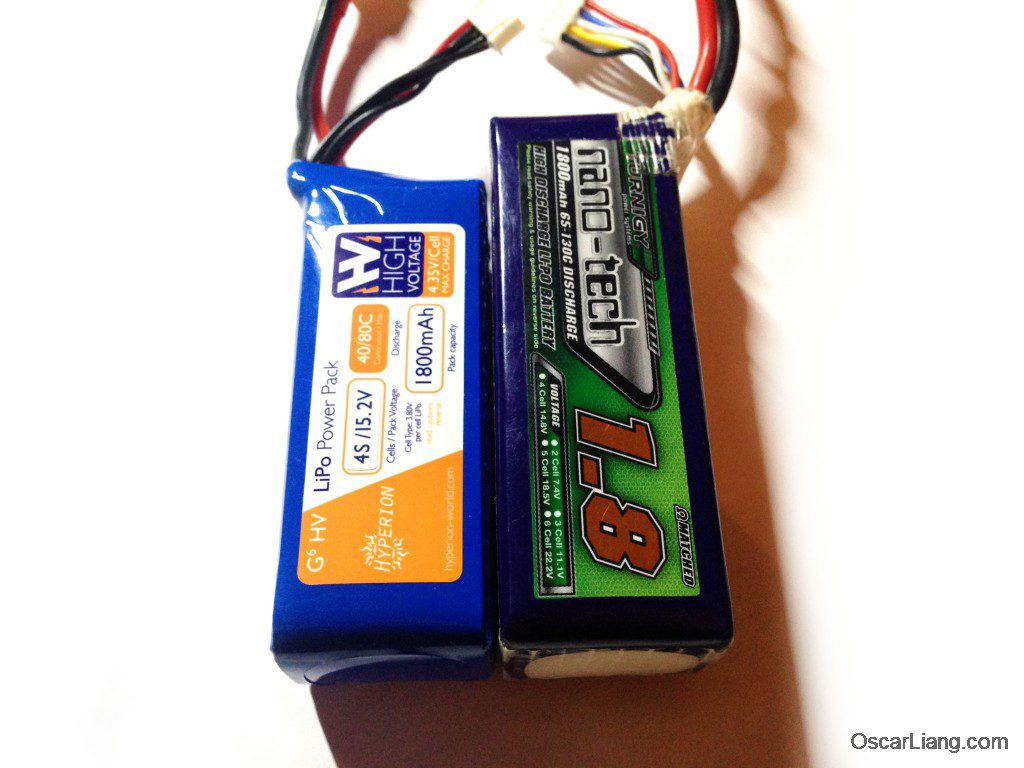 And here is the smaller 1400mAh pack. 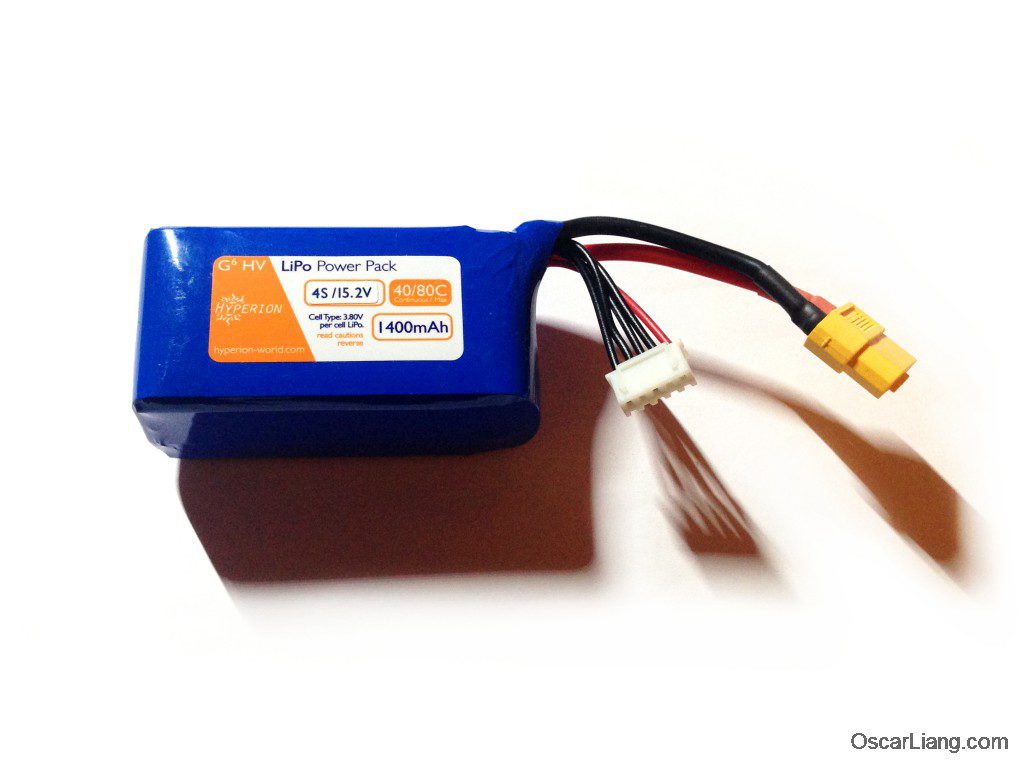 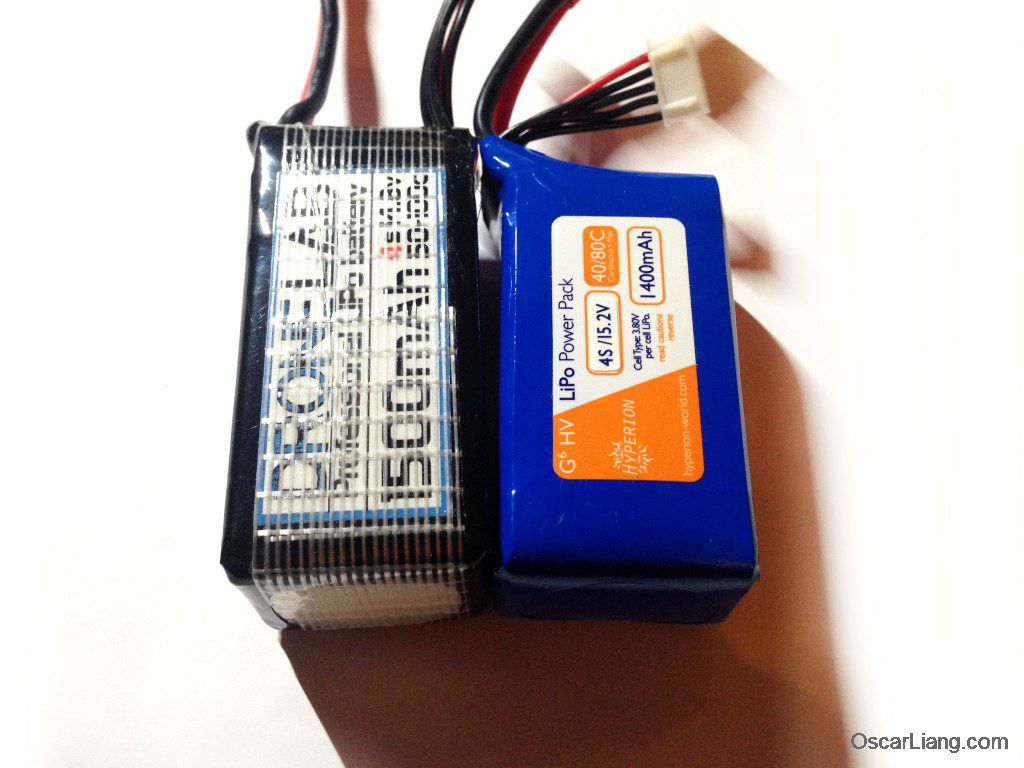 Testing and Comparing of HVLi and LiPo

So with the help of my KISS FC + KISS ESC 24A setup, I was able to monitor voltage and current draw at the same time while flying. 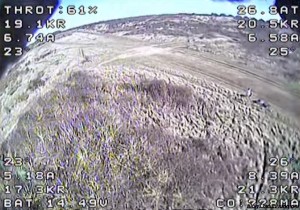 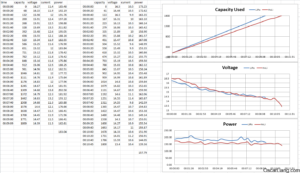 I tested and compared the Hyperion 4S 1800mAh and Turnigy Nano-Tech 4S 1800mAh. I ran the test twice, the first time I was just hovering, and the second time I did some med-high speed cruising.

Here I hovered the quad at one place, and only landded when “consumed mA” reached 1800mA – the specified battery capacity. (I removed the GoPro to get a bit longer hover time)

I was expecting they would land at about the same time, given both are the same 1800mAh capacity, but interestingly NO! The Hyperion lasted about 96 seconds longer than the Turnigy.

My guess is the weight of the batteries, the Hyperion is 50g lighter than the Turnigy, and the motors pull less current when just hovering. The power graph confirmed this, as you can see the quad has to work harder (higher power) to stay in the air when carrying the extra weight.

Another thing to notice is the voltage of the batteries throughout the whole discharging cycle. The voltage of the HVLi is higher than the LiPo initially, but towards the second half of the process, it was gradually getting closer to that of the LiPo.

Fun fact: After we have drawn 1800mA from the Turnigy Nano-tech, its voltage was still pretty high at 14.4V (3.6V per cell). That suggests it actually might be larger pack than specified by manufacturer. (maybe 1900mAh?) 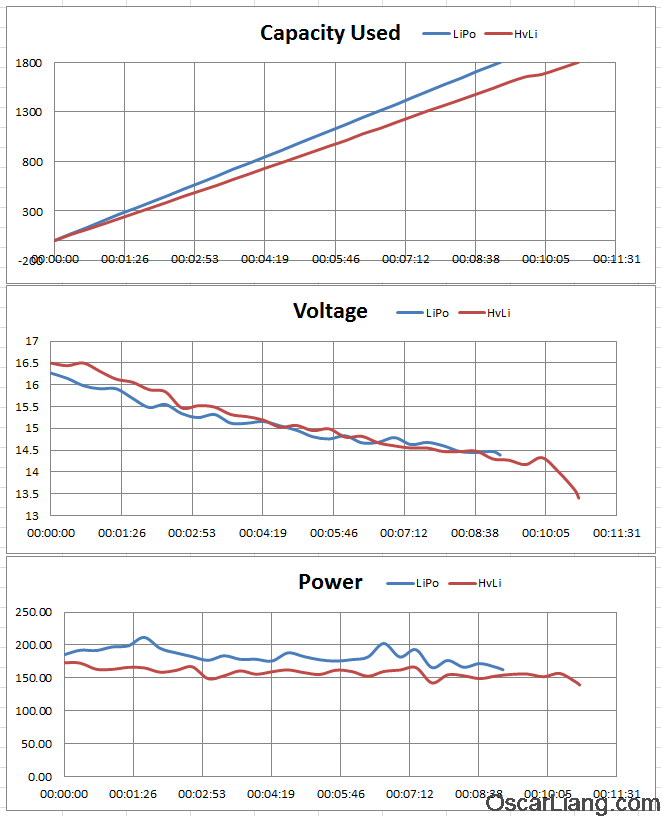 In this test I was flying around with 70% to 80% throttle constantly. The higher voltage improved the responsiveness and speed of the quad. You can see that from the power graph, the quad was able to pull out more power from the LiHV than LiPo overall.

However I didn’t notice much improvement on flight time compared to the Nano-Tech LiPo, probably because I was pushing the quad too hard.

Similar result to the hover test, where we see higher voltage at the beginning, but they converged towards the end. That suggests the battery would give your motors higher RPM and less voltage sag, thanks to the higher initial voltage, but probably similar performance to the LiPo’s in the 2nd half of the pack. I think this is something you need to take into account when doing endurance races, where you need to decide when is best to change batteries.

*Note that the Turnigy battery I was comparing against with is nearly a year old so discharge rate is worse than new packs. I don’t have any new 1800mAh LiPo packs so that’s it. 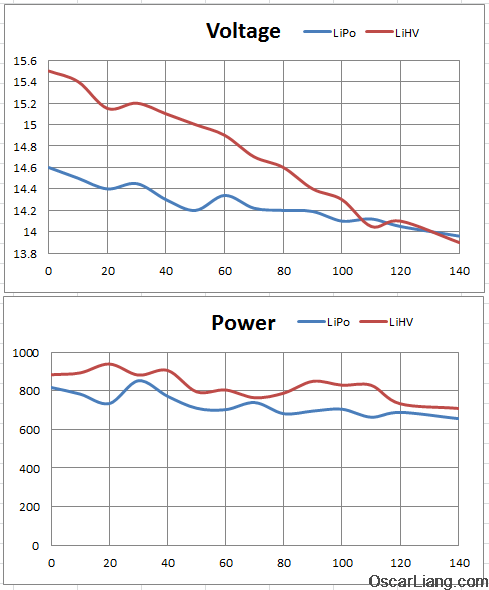 HVLi for your Fatshark Goggles

I also tested a 2S HVLi pack, which is designed for Fatshark FPV goggles – 2S 1300mAh 2C-4C. They look exactly the same to the original LiPo pack that comes with the Dominator Goggles I have, but the HVLi can power on your Goggles for much, much longer! 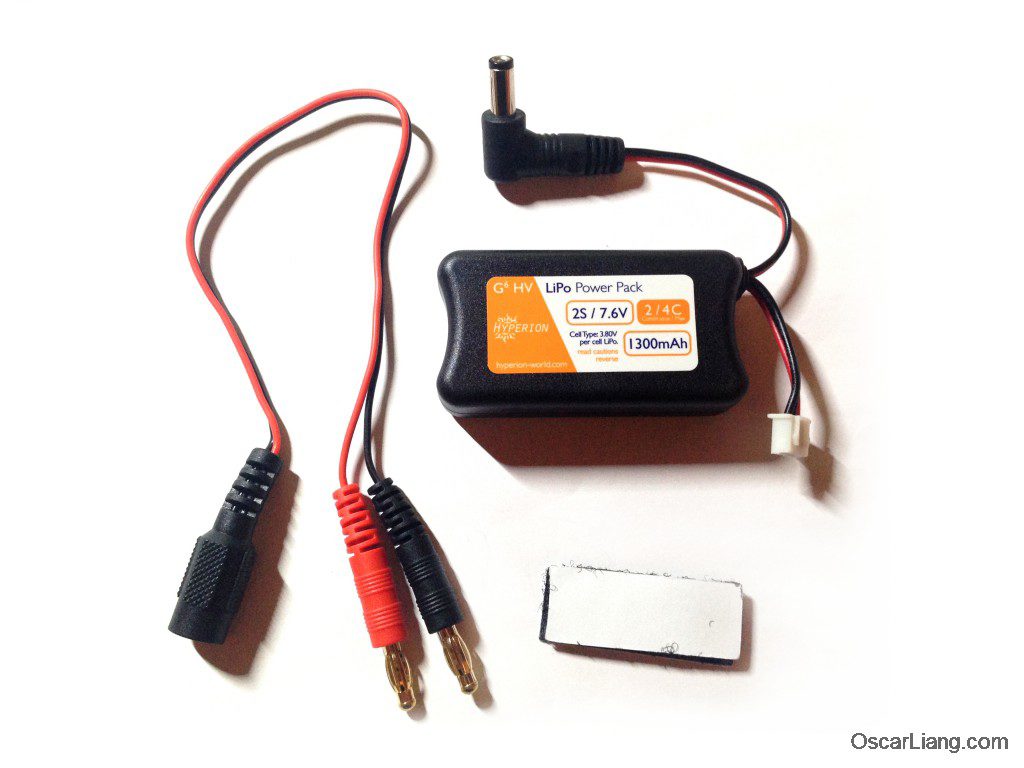 I tested the following 3 x 2S batteries, and here is the result:

The Hyperion is able to power the goggle on for nearly 3 hours straight! Very impressive :)

Note that I did this battery mod on my goggles batteries for easier charging. 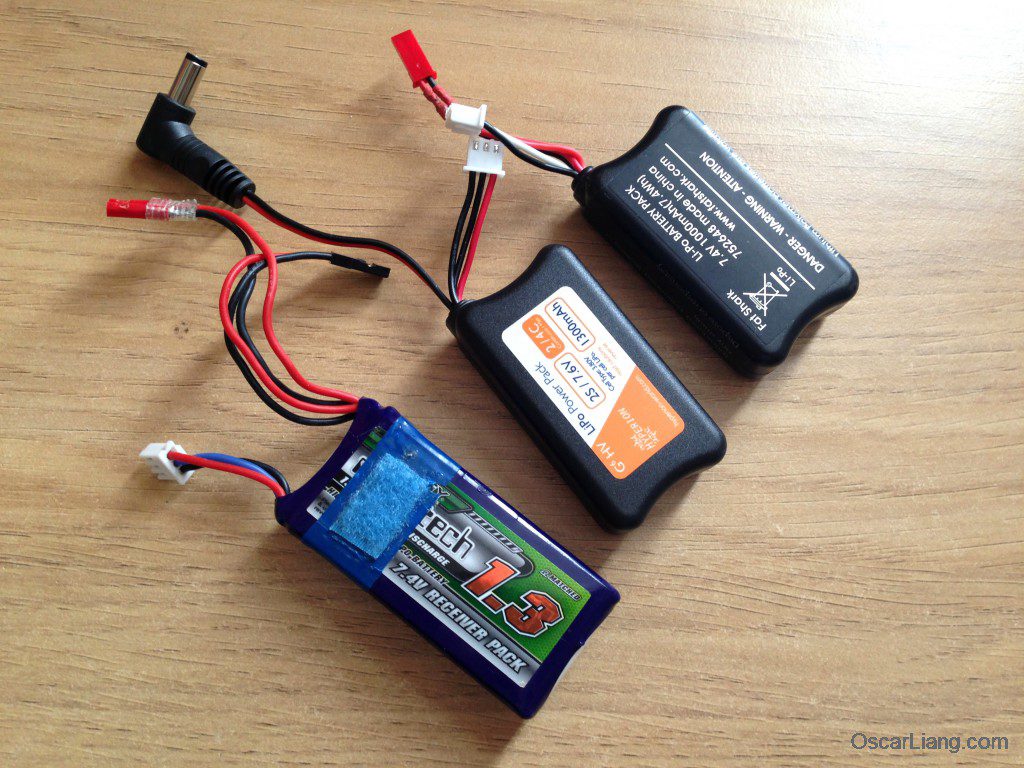 After some use of these HVLi, they seem to have pretty short life cycle: after about 30-40 discharge cycles, the cells are starting to swell, and they don’t hold full charge anymore. They get really hot after a fast session. Normally for a decent standard LiPo they should hold up 300+ cycles.

So at this point, I don’t think I will buy anymore HVLi for day to day flying and practice due to the lack of longevity. However for special events like races, I might still consider them for the outstanding performance.

Extra Discussion: When getting new LiPo batteries, do you do the “Break-in procedure” to “maximize” Lipo performance? Leave you thoughts on the forum :)

From my experience with LiHV (mainly small packs, 1S and 2S for toothpicks and whoops) nothing even comes close in performance in the micro world.. Longevity is same as other micro quad batteries for me or can even be longer because they are not hot when landing

About the graph in the fast flying test section. What does the X value 0 – 140 means? I can’t seem to figure it out. Thanks in advance

What amperage should LiHV batteries charge at? For example a 1500mAh LiPo would charge at 1.5 amps. How a bout a 3500 mAh LiHV? Thanks

Same rules for LiPo applies to LiHV, so 1C is totally safe.

Big issue if HVLi batteries don’t last more than 40 cycles.
I’m asking myself if there is a better performance on charging HVLi like LiPo compared to a LiPo of the same specs and quality. What do you think?

Have had Bolt LIHV batteries for 2 years with no issues. Recently I went to 4.35V and they are much better than at 4.2V. For a start, they take their full capacity and the increased flight time is almost double. The quad goes better and faster. The video is better as the camera doesn’t get a voltage lag fuzzies until the battery is spent. VTx has better range …..
It doesn’t make sense to under charge LiHV batteries and the only reason I did was my chargers were old and incapable of 4.35V. I also use standard LiPOs with better specs and they don’t come close to the Bold LiHVs on either charge voltage. With very little difference in price LiHV batteries are way better, even if they do a few less charge cycles.

HvLi can get more charge on them however discharge level is the same as Lipo, so if you land at 3.5v on lipo you should land as well at 3.5v on HvLi.

so Dji has a secret technology about LiHV batteries, because my phantom battery has 100 cycles and is not swollen and with great power.

Hyperion HVLI LiPo battery was the worst battery i ever own… They all puff really really fast… some even after a fisrt charge! Just brought some great Pulse battery and don’t waste your money and time on hyperion product.

Is there any down side to just charging a LiHV like a standard LiPo?

yes, you won’t be using the battery to its full potential, it’s like charging a normal 1300mah lipo to only 16V. Not only losing top voltage you are also losing on capacity (and flight time)

Would you still benefit from the improved chemistry though?

If I charged an HV lipo with standard voltage charge would this be any different from changing a standard Lipo? Is the power more consistent even with an undercharged HV lipo?

Any idea on how to get the voltage telemetry on my Taranis/X4R-SB to show the LiHV voltage properly? When I run a fully charged LiHV at 17.4V on my quad, it shows as 16.8V on the Taranis.

Since the lihv packs max charge is higher, does it mean that the minimum is also higher? Or do you still land your copter @ 3.5-3.6

The minimum voltage should be the same as standard lipo, this is what i am using anyway and seems to work fine for me.

I saw in an article that the lower voltage is the same as standard Lipo. However, I already know that the full voltage and the low voltage limits on Lipo batteries are a compromise. The higher you charge them, the fewer cycles you’ll get out of them. The same with how low you discharge them. The fully discharged and fully charged voltages were chosen to maximize the live of the battery while also maximizing the capacity. I’ve seen claims that if you charge your Lipos to 4.1v, instead of 4.2v you’ll get 50% more cycles out of them. But, the capacity will be significantly reduced.

I’ve got no complaints from skipping the ‘priming/ cycling’ process. And IMO it’s not worth the time/ work to do it as the gains do not seem worth it. interesting article from a website i encourage all RC people to read! batteryuniversity.com/learn/article/how_to_prime_batteries