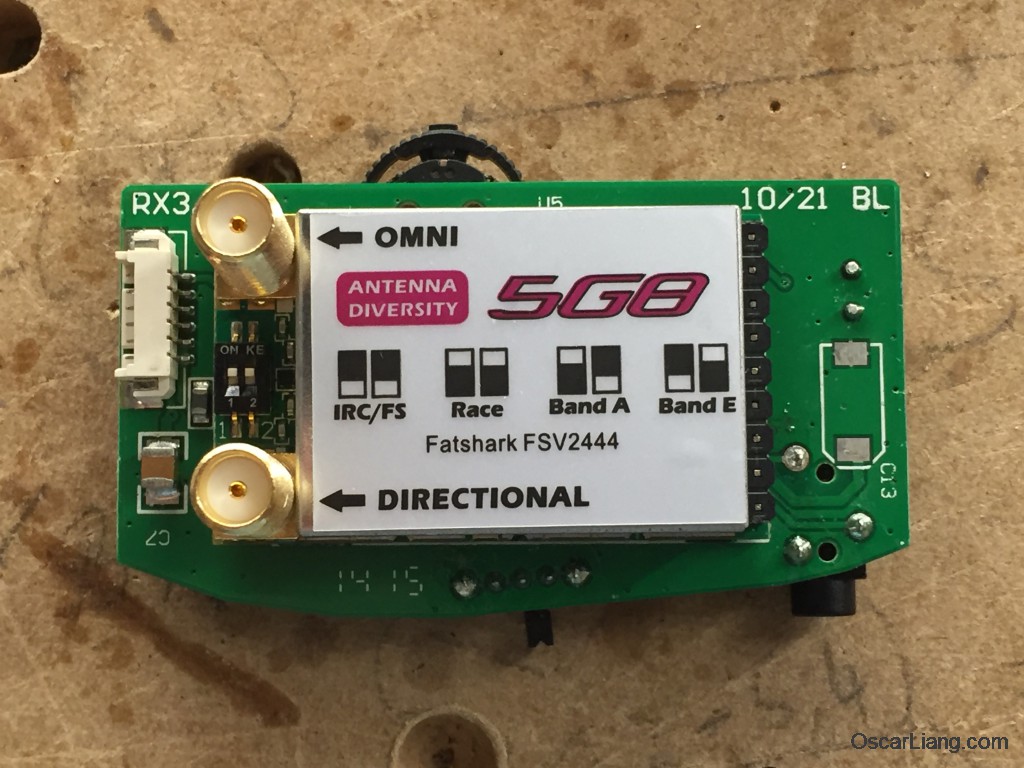 Mischa showed us how he upgraded his Attitude V2 Goggles with a Diversity video receiver module, that is designed for the Fatshark Dominator V2/V3/HD. He also added a faceplate on this pair of goggles.

Back when I bought my Fatshark Attitude V2, they were a great pair of FPV goggles. Actually – they still are. But unfortunately the built-in video receiver doesn’t support Raceband, and I am tempted to try the new diversity VRX for better signal.

You can’t replace the internal VRX in the Attitude V2 very easily like the new Dominators, as it’s built-in. Of course I could just buy/built a ground station (external VRX) and plug it into the input of the goggles. But I like the convenience of just flying wherever I am without setting up a bunch of stuff.

That’s why I did this DIY hack, and upgraded my Fatshark Attitude V2 with a Diversity Raceband VRX module – and while I was at it, I added a faceplate too.

The whole procedure was not too difficult but requires some good soldering skills, so this is not really for beginners.

Update (24/05/2016): Many thanks to Jeremy (ModifyRC), Ward Paterson, and a few other good people informed me that the Fatshark FSV2444 Diversity module actually perform quite poorly, something to do with the signal switching software and all RX have been called back. Maybe not a good idea to purchase this module just yet :)

First off, we need to get to the board that has the module on it. Take off the contrast/brightness button and store it in a safe spot, it’s just pushed on.

To open the case take off the two stickers (CE and FCC) on the bottom of the Fatshark behind which you will find holes with one screw each.

Unscrew those, take them out and keep them save. Then take off the eyecups. If you do not want to add a faceplate, unhook them only on the top – they are kinda difficult to get back in.

Now you can carefully take the two halves apart starting from the side that usually touches your head.

There is a useful video on Fatshark’s Youtube channel.

The case is open, now take the receiver module together with the board it’s soldered to out of the case. You will have to unplug two cables then it’s out of there. 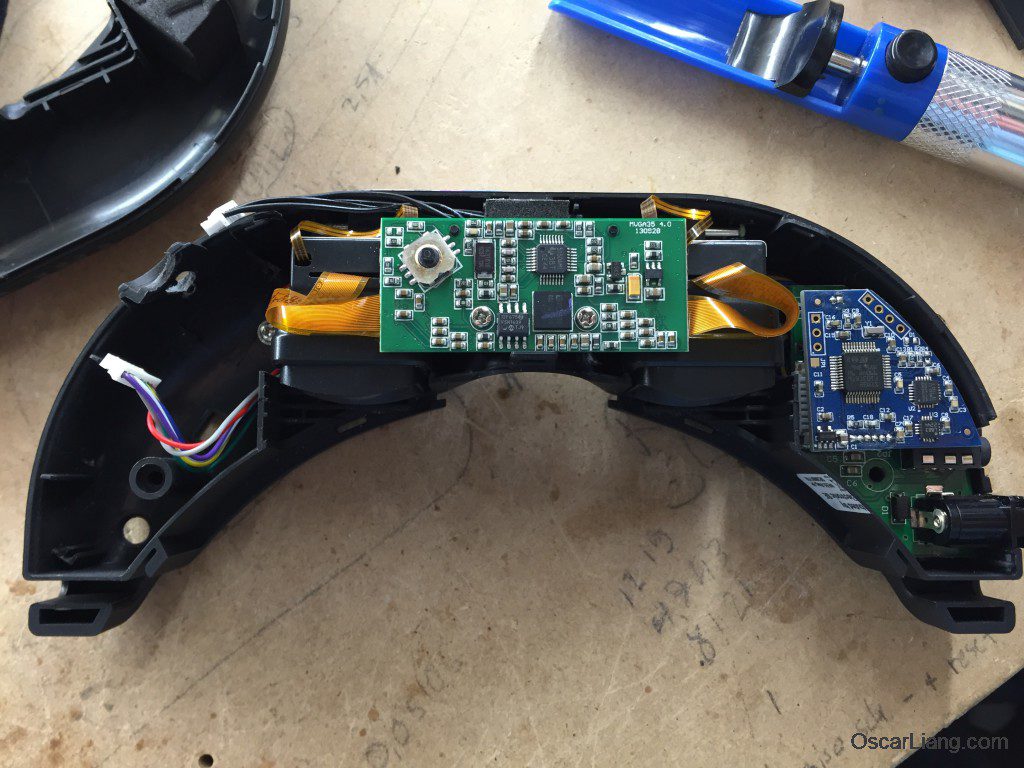 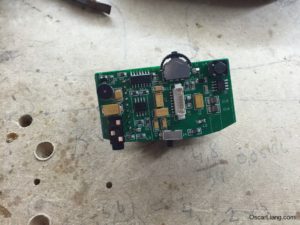 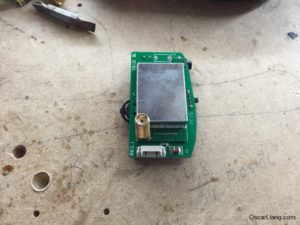 3. Desolder the Receiver module from the PCB

The receiver is soldered to the board on 3 points – and through the 8 pins of course.

The easiest way I found to unsolder the pins is getting rid of the plastic on the receiver side, then heat up the pins quick and hot (380C with a big tip) and pull them out the other side once they start moving. That’s usually within a couple of seconds. 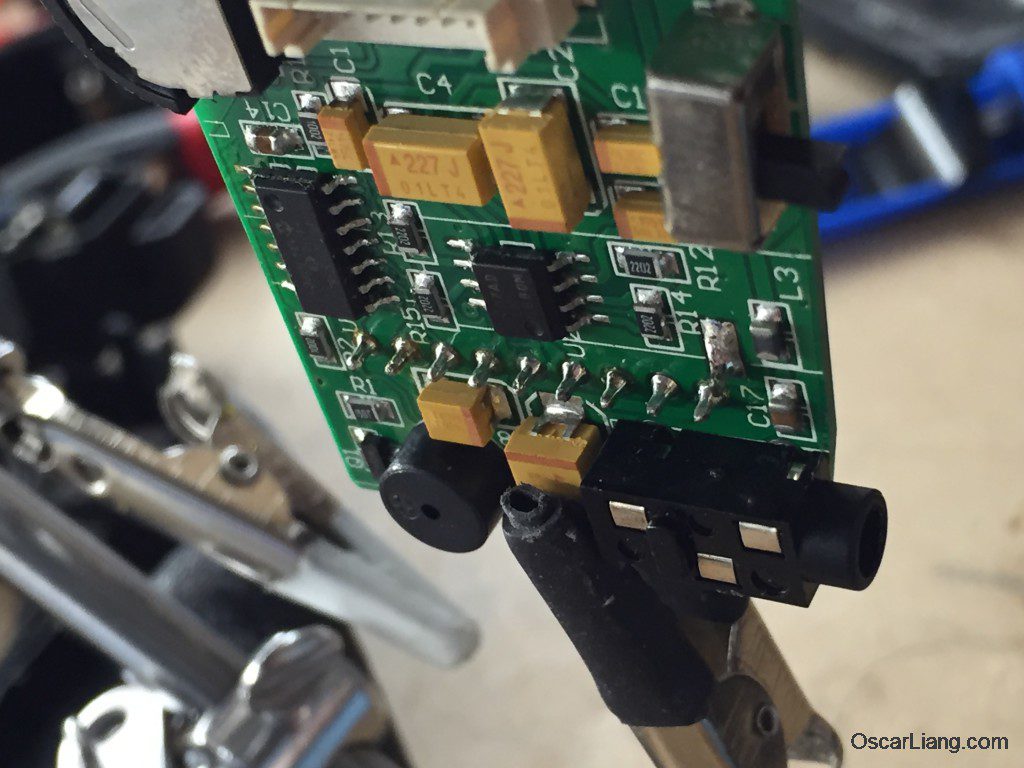 Make sure you have fresh solder on the tip and do not touch the pin until it moves – or it won’t move because you take the heat away through the pliers. Also let it cool down between pulling every other pin, you don’t want the board to get too hot.

Once you’ve gotten rid of all the pins, heat up the 3 remaining points one after the other and either de-solder them with a pump or heat one up, move a screwdriver between the board and the receiver to push them a little apart and do that with all of the points a few times until the receiver falls off the board. The hardest part is done. 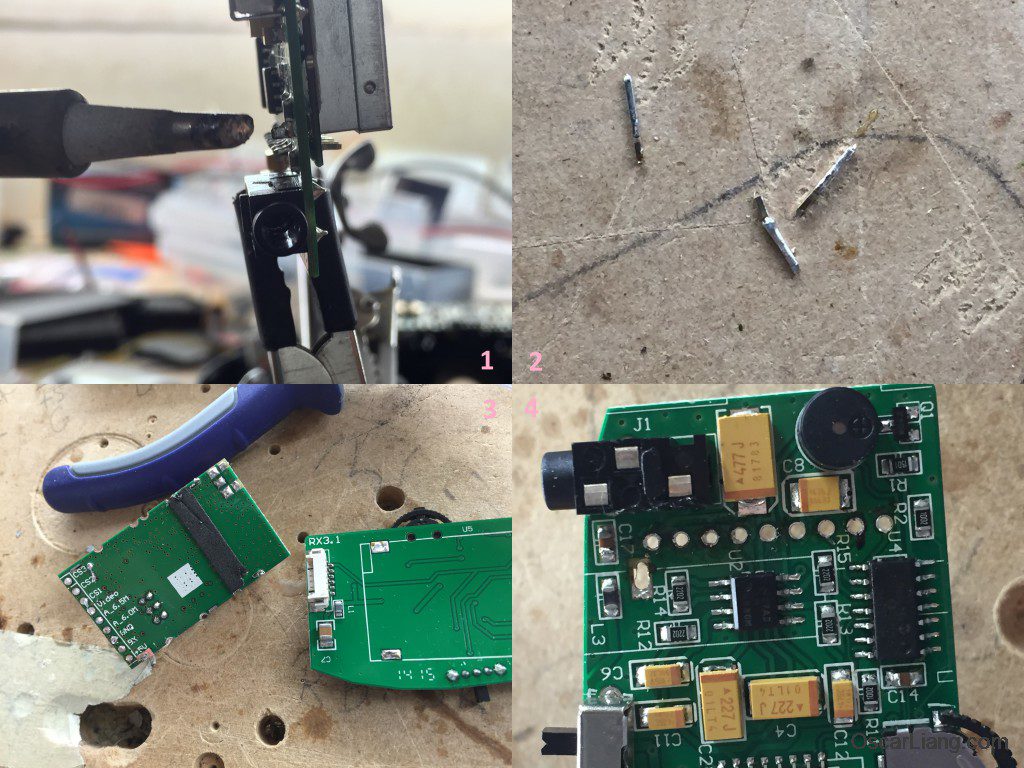 Now clean up the board/pinholes, align the new receiver and solder the new pins onto the board. 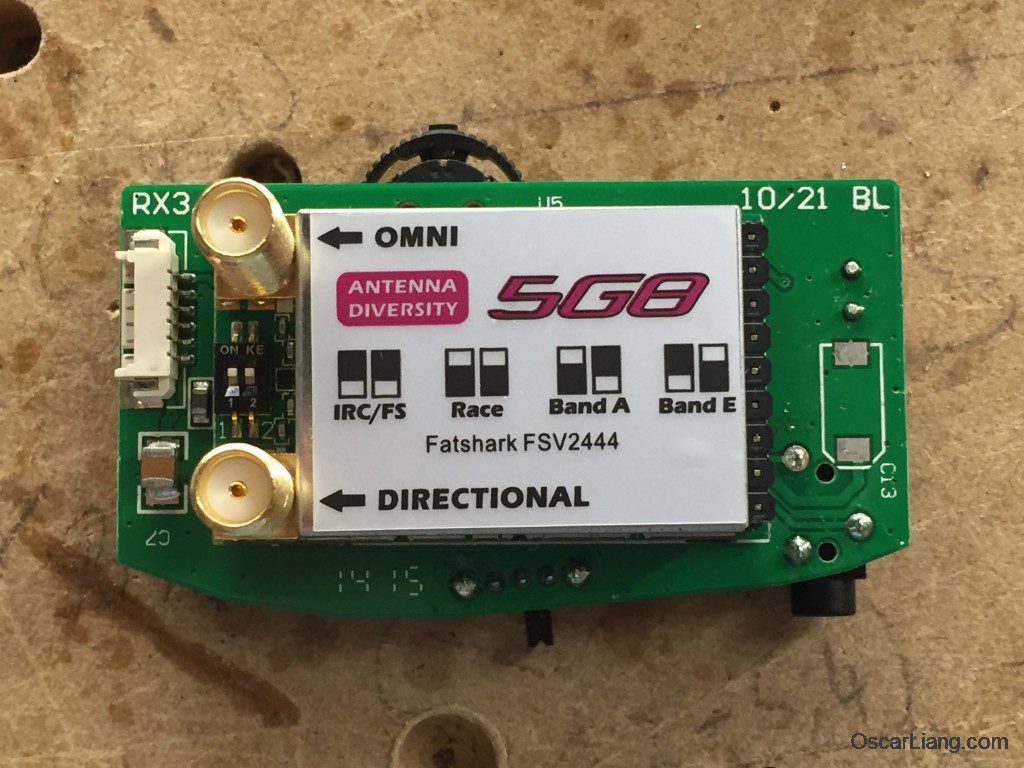 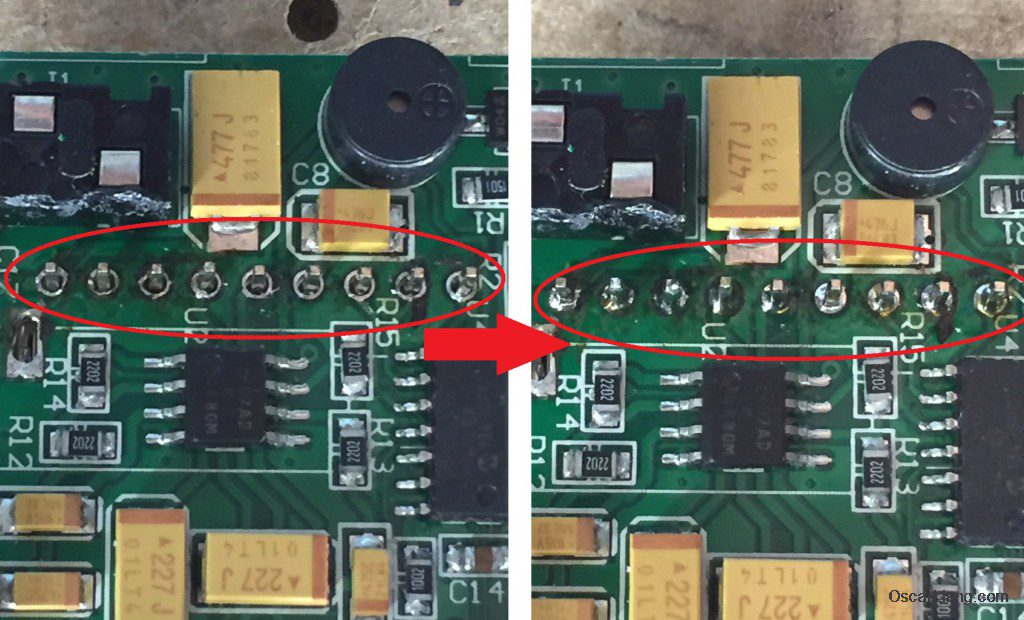 Depending on the module you are going to use and the way you want to use it, drill a hole or two into the case for the second SMA (in case of the diversity module) or for switching bands. 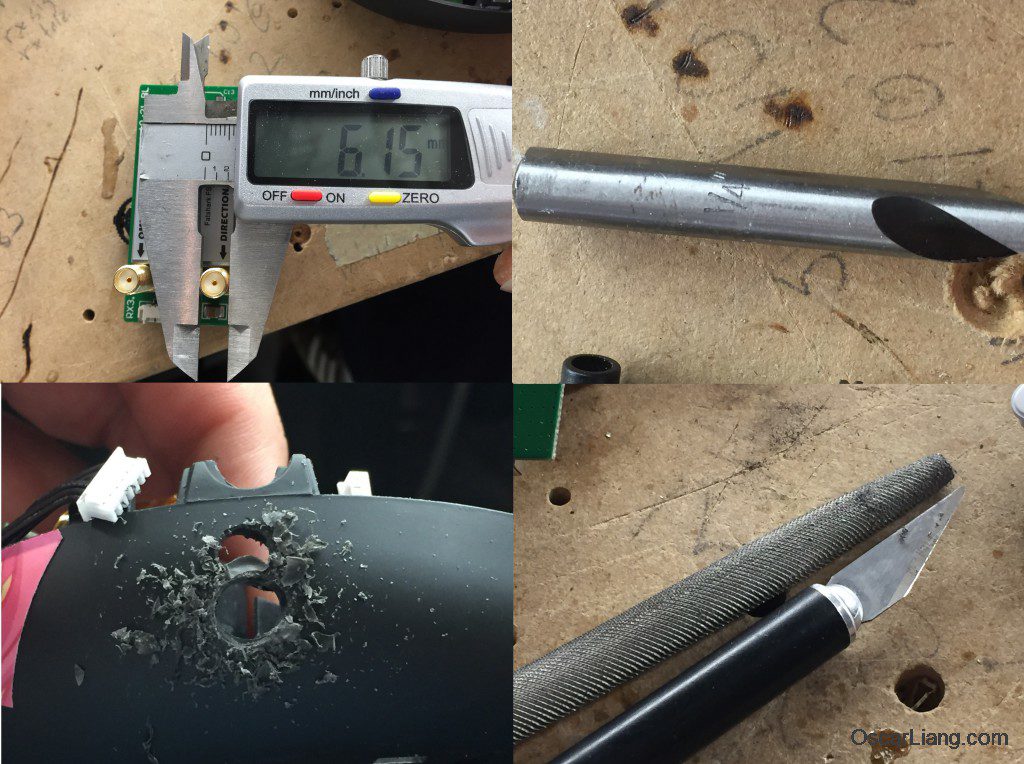 For the diversity you will need another 1/4” hole that is a little longer because of the installation angle. Luckily the diversity module comes with a drilling template. ;) 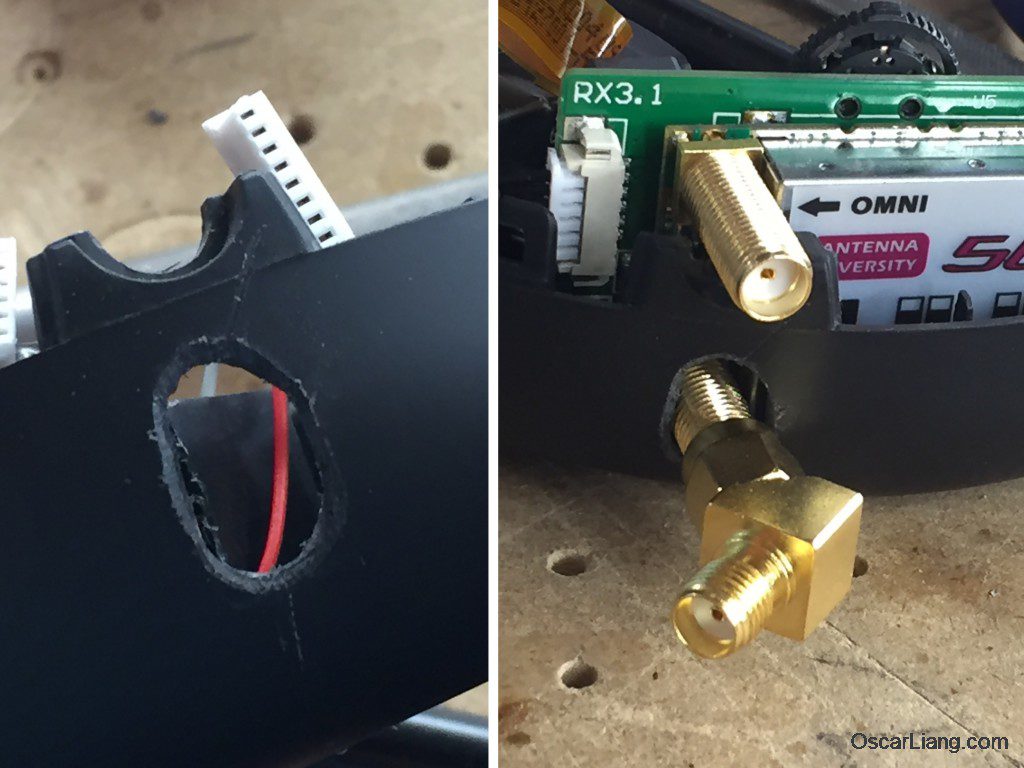 Plug in the cables and push the board back in place. Make sure you push it all the way down so the headphone jack sits flush and the switch for the internal/external module is usable.

Put the halves of the case back together, starting at the front. Screw them back together and re-attach the headband. Done. 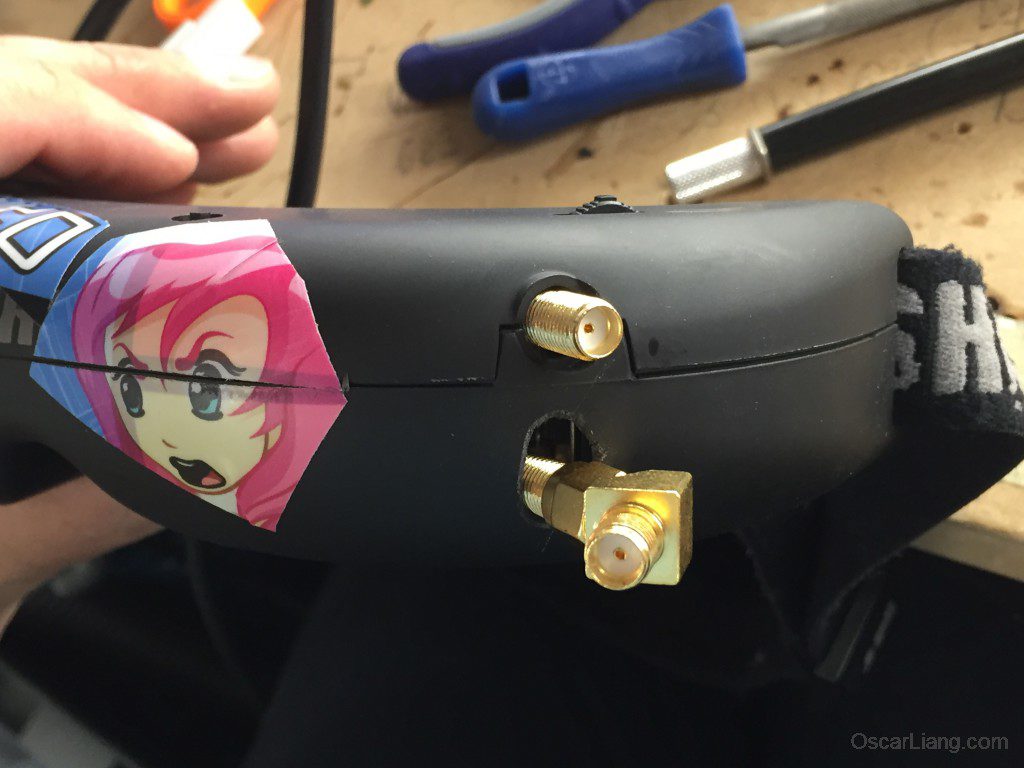 Want it to sit better on your face? Get the Fatshark Dominator Faceplate (available in both white and black), put some thin double-sided tape underneath the fan and push it in place. Its a perfect fit and super comfy.

The Attitude V2 (and probably the other Fatshark too) are a perfect fit on the left side of the FrSky Taranis Case with a couple of Antennas. 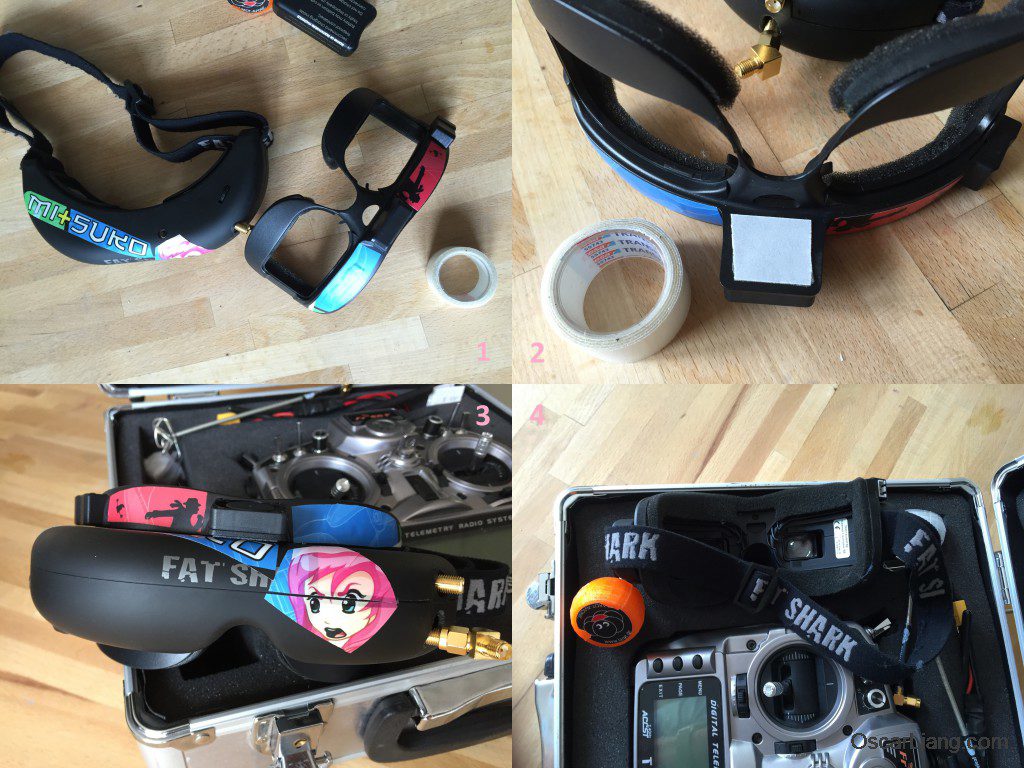 I i know this is old but i just do this.mod to my attitude v2.
But with a true-d v1.
And now my fatshark keep beeping and i realy dont know why and wath to do.
Please can someone help me.

Bit late to the party,
But I cannot see where the other parts that need de-soldering apart from the pins. Any help would be greatly appreciated.

Do you think a Realacc por furious fits inside the attitude v2 ?

Finally, I install the Reallacc Lite inside the attitude v2, but I need to cut the case with a rectangle hole.
It’s a good mod, because now I have Diversity module with Raceband, Race2, and also OSD.

I change channel and band in the diveristy module with the Fatshark button.

Thinking about doing the same mod I was just curious how it was working out for u? Does it make a big difference ?

What is and where to buy this Reallacc Lite module? any pictures or links to this mod you did?

I did this mod too. Got the Diversity module from banggood. It makes the attitude v2 a million times better and more flexible! I actually made a module bay so that I can plug in whatever module I want!

You have a pic of this hole that you cut out? Can I see it

anybody tried furious D diversity reciever on the attitude v2?

Do you guys think it could be possible to do the same thing with a Furious FPV True-D receiver?

I think so as the pins should match, the question is can you fit it in there :)

It might be possible but there are better alternatives like the flying lemon 2 pineapple module no external screen and would work with the switches so you save some bulk there and ease of use my only worry would be youd have to cut out a module bay so a good amount of plastic and then 3d print some custom covers. Can be done but it’ll be a lot of work.

I did this mod but with a normal 5.8ghz raceband receiver. It works great except I can only get 7 fatshark channels. I assume this is because something in the goggles thinks it can still only receive the original 7 fs channels. Has anyone done this mod and gotten all 8 channels?
Thanks

Are you still experience the issue??

Hi Oscar, have you tried this with the replacement fsv2445 v2? Also, am I right in thinking these are a direct pin to pin replacement, I’m sure I read somewhere that you have to swap 2 over.
Thanks
Phil

Not sure about the FSV2445 V2, but these modules are all designed for the Dominator so they should be plug and play :)

due to the fact that the FSV2444 Modul actual don’t perform well I was wondering if the Fat Shark 5.8GHZ 5G8RX will also work as replacement Racebandmodul within the FS Attitude v2?

Can anybody answer this question?

I assume I can use other modules for this as well, right? My question is, how will the channel be changed? Will it work as before or I always need to flip the DIP switches when I change channel?

I believe so if they have the same pins :)
Channel changes should be the same according to the RX.

Thanks Mischa, I have a Attitude V2 with a broken received board, damn SMA plug joint is very weak. Would this procedure work with any of the plug in modules used by Dominator or the attitude v3. I have already removed the receiver from the PCB and found the area around the SMA connection to be weak. removing and replacing the antenna will brake the connection to the board. I will support this connection with hot glue once replaced.

The majority of the providers, such as GetFPV and RotorGeeks have a clear notice that they can no longer be purchased since they have been recalled, this is as of 5/27/16.

Good job, but actually, this receiver is very bad.
I’ve tried it, and it has poor reception.
In fact, it’s not a diversisty.
It’s only a switcher between two antennas.
It has only one receiver.
With this module, I have a worse signal with a 8 dbi Immersionrc patch and Aomway pinwheel, than my standalone receiver with a bad antenna.
Actually, Fatshark admit that there’s a problem with this receiver, and they are going to recall them…all ! (firmware problem compared to test version)

Can you please tell me where you got the 45 degree SMA connector? Thank you!

At this point people need to steer clear of the Fat Shark module. There is a problem with them not switching properly. Fat Shark has confirmed the issue and stated there will be a recall once it has been fixed. You can read for yourself over on FPVLabs..

thanks for the info Jeremy

Can you even buy these diversity receivers yet? Where?