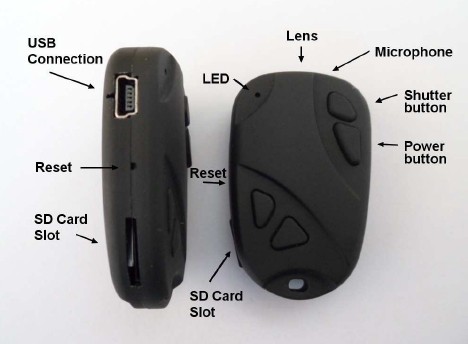 All 808 cameras use micro SD card to record videos and store pictures with FAT32 file system. The SD card speed must meet the requirement of the camera video data rate. If the SD card is too slow there might be video problems occur. There might be problems related to the SD cards that might not be obvious to the users.

Slow cards have been known to cause problems like increased missing frame rate and  video-audio sync problems.  Most 808 cameras work with class 4 and class 6 SD card. However higher class cards to fail might not be compatible and might not work at all.

How to choose SD cards for 808 Camera

Speed of the SD Cards Explained

Which Class is best for Keychain Camera?

Class 4 memory cards has been reported to provide the best compatibility with this camera and are strongly recommended. Class 6 and Class 10 cards with faster speed but cannot improve the video image quality. It also costs more, and sometimes even may not work at all! I do not recommend using class 10 with this camera.

Things you should know when formatting SD card

The Micro SD card format must be FAT32. Some cameras don’t size the micro SD card in the camera properly and the free space is reduced by 7.4%. This can cause problems if the used space approaches capacity. It’s recommended to use an external card reader to format the card.

Try to reformat your SD card. If that doesn’t help, try a different micro SD card. Benchmark the card with Crystal Disk Mark. The random write speed should be more than 1 MBps, and is best to be more than 1.5 MBps. Anything that interrupts the video stream, including a corrupted file system will stop the recording. In this case you will have to reformat the card. Try to reformat the card in a SD card adapter instead of the camera.

It could also be a faulty part in the camera, if that’s the case you will have to replace the camera.

Although in webcam mode it doesn’t utilize the SD card, but it still must be installed.

If the AVI file is zero length because the battery died while recording, don’t plug the camera into the PC without turning the camera on.  Press and hold the power button for a few seconds till the light comes on and THEN plug it into the PC.

If Crystal Disk Mark reports a random write speed less than 1 megabyte per second, the video quality will probably suffer.  Use a faster flash card.

The camera can’t access the flash card.  Possible problems could be an improperly inserted card, a defective card socket, a defective flash card, a flash card that is not FAT32 format, a card that was used in another device and not formatted before use in the 808 camera.

Step 1 – Remove the micro SD card.  Reset the camera. Connect the USB cable.  The camera should install as a mass storage device (a drive letter) and show the drive as being empty.

Step 2 – Disconnect the USB cable.  Remove the micro SD card.  Reset the camera. Long press the power button.  The LED should turn on, flash 15 or 35 times, and go out.

If the above tests pass, then try another SD card, or reformat the card and try again.

If both tests fail then it’s probably the faulty camera. If you are good at electronics you can try to take the case off and check the circuit board for a defect (a solder short, a solder open etc) and correct it.

In most cameras the reason for missing frame is low light, a very slow micro SD card and large video frames. The missing frame rate is lower in bright daylight.

Is there a problem viewing video on macbook pro? Videos seem to need to be converted to MOV format. I do not see how to install the FAT32 format you mention. The mac takes forever to convert to MOV and often using the mac messes up the camera. Right now I have one camera that works but takes forever to convert and one does not work. Both worked for a while but now only the one.