Today I loaded up the Arduino Multiwii Quadcopter code on the Arduino Uno, and connected everything including  a Radio controller, the IMU, ESC and motors, it works straight away! It’s so much easier than I thought. 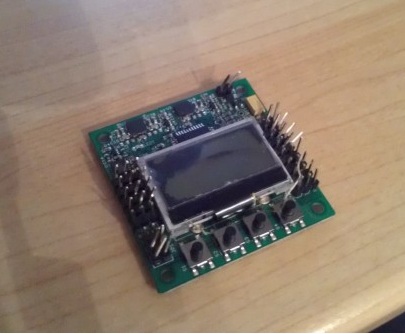 So I decided rather than buying a new flight controller, I might try to dig out a spare Arduino board to make one myself. Since there are already so many open source Arduino projects for quadcopter, it’s not difficult at all to setup one. It’s not a new thing at all, and they are very well documented as well. But since building a quadcopter isn’t a straight-forward task, it does take time and effort to read and learn things.

I basically followed this diagram from the Arduino Multiwii website  to connect everything. 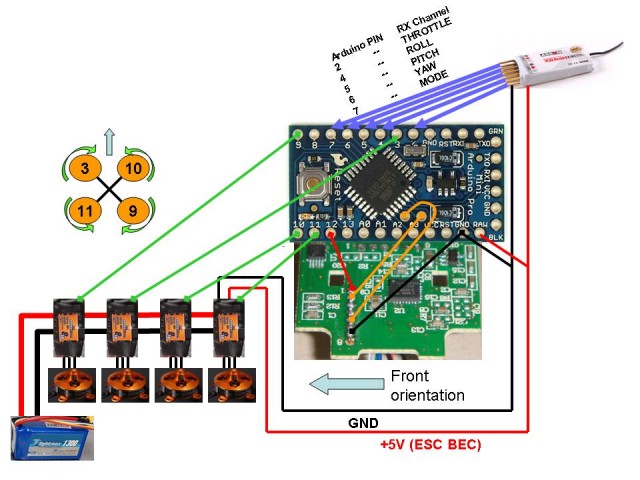 Here is the result.

The motors are controlled correctly, and also response to the IMU as well! I might actually mount the propellers on it and have a test hover flight this week.

For the start, I might just use Multiwii software, later on I might try writing one myself.

How to use GY80 Arduino – ADXL345 Accelerometer

I’ve some problems connecting my receiver to arduino nano . please can you help me the guide for multiwii sir .

viso95 0
Hi everybody, i’m building a quadcopter with Arduino uno and multiwii.I have a problem: Nothing happends. When i connect the Arduino uno to the computer i can see that it receives the signal from the receiver but the arduino Doesn’t give the signal to the Esc. If i measure the potential of the signal of the Esc with the ground I see it’s always the same even if I move the transmitter. Can anyone help me?

looking at the diagram there is a green board below the arduino. what is that?

it’s the gyro / Acc sensor from the Wii Nunchuck.

Excuse Me
May I ask you one question?
Would you share your code for us?

Hi, thanks for this good guide!
I’ve some problems connecting my gy-80 to the arduino 1.
The I2C error is too high and change from -30000 to 30000…
Could you send me your code just to try if it work or is a problem of the board?
Thanks!

My ACC’s pitch value never change and mag’s roll value is the same,no matter how i move gy80,i guess it’s a code error,can you send me your multiwii code to my email?Thank you!

Can it be a problem for you to facilitate me the code for the arduino, is just that I am having some problems with the same and right now I been stuck with it for some time. I will appreciate the help entirely.

I used some open source software called “multiwii”, google it you can download it.

I have an Arduino Duemilanove that has the Multiwii code uploaded to it. I am using a 9DOF Razor Imu from sparkfun. When I wire up everything according to the diagram you have given and on the multiwii site it works fine. The motors arm up, the throttle works the signal changes on the gui for yaw roll pitch and yaw as well. The only issue that arises is that the 3-D diagram in multiwii does not rotate when I move my quadcopter.

Also I defined the 9DOF razor imu in the config file by uncommenting free imu v03….your help is really needed.

did you press “start” in the GUI software?

is the sensor graph lines moving ?

Yup pressed start nothing happens except the z value of the accelerometer goes goes to 265 and all other lines are at 0. None of the other sensor graph lines move. even when i press calib_acc, the z value of the goes to zero for a brief time and then moves to 265

This post is very important for me. You have said arduino uno has the same pin numbers to be connect. I want to know how we find the correct pin diagram according to the different versions of the multiwii codes. Can you send or upload a complete pin diagram for this project. Also I wanted to know the flying steps and how to work with the interface they have provided.
Thank You.

I have supplied the diagram you need, you just need to follow the pin number in the diagram (the pin numbers are the same for Arduino pro mini, Arduino Nano and Arduino Uno).
Once you connected everything, change the settings in the config.h file in the sketch, upload it to the Arduino, open up the Multiwii GUI, and connect to the Arduino com port.

If everything works correctly, you should see the data from the IMU sensors, and a 3D model of your copter, that moves as you move it.

Hello! I have a unique design, is how you pass me the details of the connections.

I will try it ( i tried but will try again) and if i can i will make a video to show the problem. ty so much have a nice day.

are you intended to fly without an IMU? I don’t think multiwii will allow you to arm it because you need at least a Gyro sensor to do so.

No for now i dont have quad esc’s motors or imu ( i want to make it). At the begining i want to know my uno works fine as a control card. Dont wanna buy any card because i want to make it that way i want. So install the software (with define imu and w/o define any imu) but i dont have any and so cant arm it.
And now i think you saying that to do arm motors i need to have imu. if i dont have any imu, define or not it in software didnt change sitiation that i am in
İs that true? Did i understand clear or not? Ty again

if your uno work with the “blink” example sketch, it will work with Multiwii :-)
I just tried removing the IMU from my quad, and i can still arm it.
so, like you have said it yourself, try to uncomment a IMU sensor (e.g. GY80, that’s what i am using), and try upload the sketch again.

Ni, thats very hice, im 15 years old and i have the arduino uno, i wanna made my own quadcopter, but i dont know how to connect all the components, con u put here a diagrama of the diferents connections? Thanks a lot