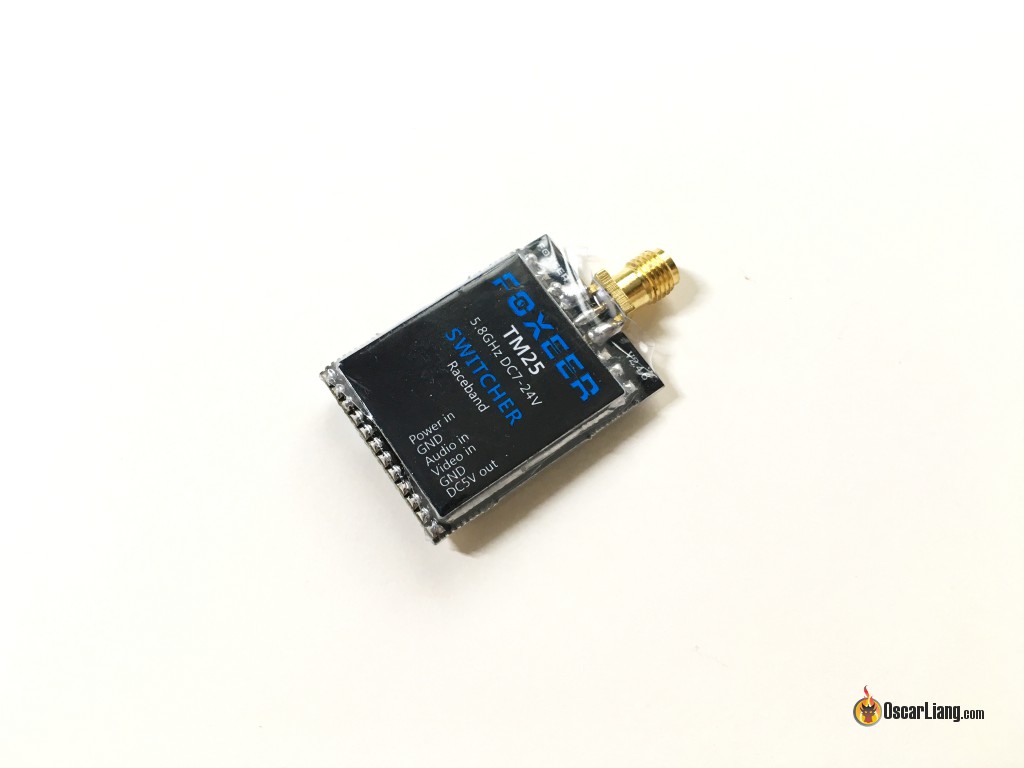 Foxeer’s Switcher VTX has probably been the most recommend VTX the last few months. Now there is a new version which provides even more stable and better quality images than the old one.

You can get the Foxeer TM25 Switcher video transmitter and antenna from Surveilzone (Antenna).

The new TM25 video transmitter has added more filtering capacitors on board, than the previous version. 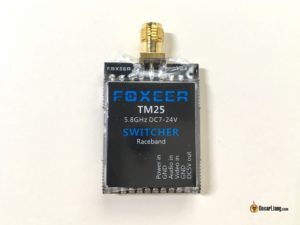 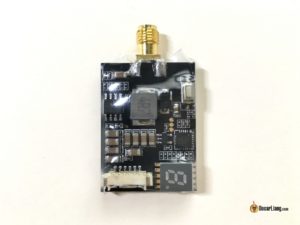 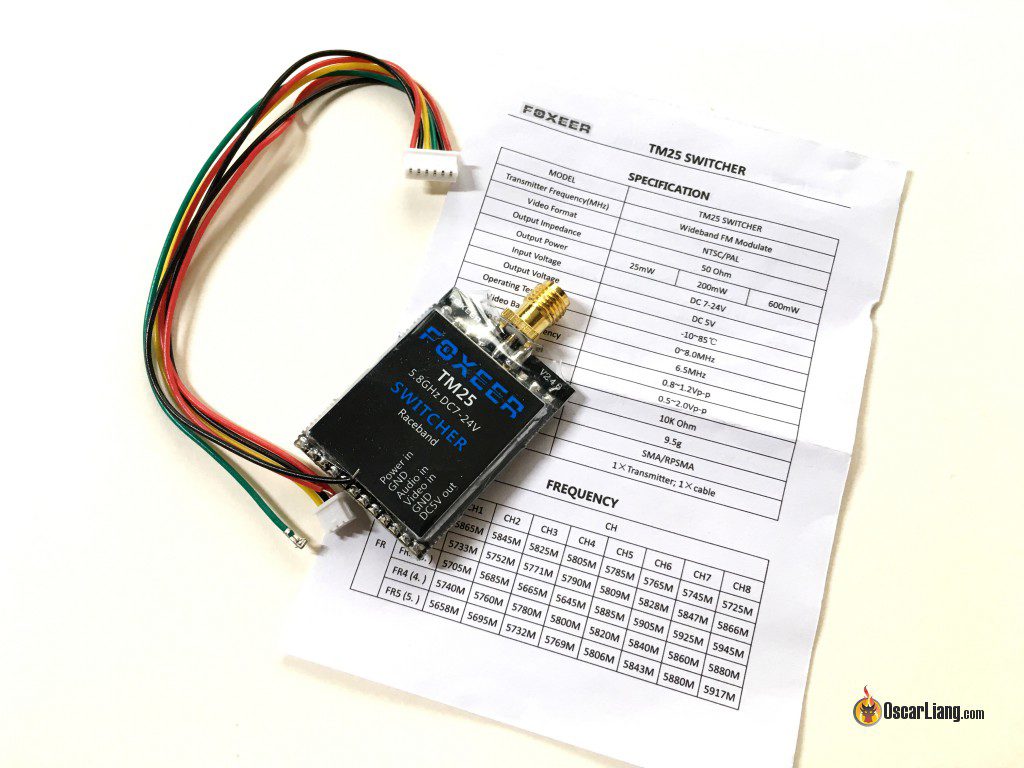 There were some problems with their earlier batch that outputs way more power than they should, but this have been fixed in this version.

The Switcher video transmitter supports 40 channels including Raceband – makes it so much easier flying with a group of pilots.

It allows you to change power between 25mW, 200mW and 600mW. Imagine when flying indoor you want to run 25mW to avoid multi-path. You can change it to 200mW when flying outdoor with your friends, or jump right up to 600mW when you are flying alone around lots of obstacles and trees (or possibly for some long range flying).

In this VTX you can choose SMA or RP-SMA connectors depends on what you normally run.

It allows you to power it directly from a 2S-5S LiPo battery, as well as giving out 5V for your FPV camera (if supported).

Channels can be changed with a button which is much better than dip switches.

The SMA connector is now located right in the middle of the unit, which might or might not make it easier to mount for some people. What I really would love to see is a pigtail connector like the Hawkeye VTX.

How to Change VTX power 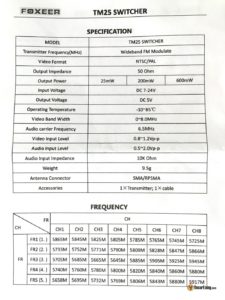 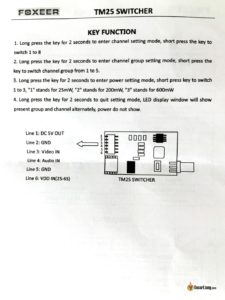 Also check out the Foxeer Mini Antenna, the whole length of the antenna is 6cm. Available in SMA & RP-SMA, RHCP & LHCP, Also assorted colours as well. 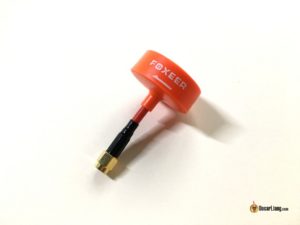 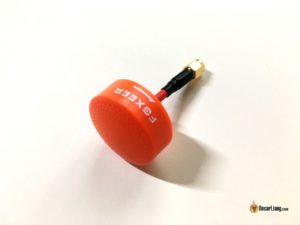 Hello, I have had to water proof this vtx so I took off the heat shrink. When putting it into my quad, I only put on electrical tape to prevent a short. During my 3rd flight using this vtx, the single digit LED display cover flew off mid flight and now I can’t read the random LEDs that were under the display. Any suggestions?

I followed your instructions,
I’m pressing & holding down the button as I power on the TM25, it powers on to “power change mode ”
Per your Description. (Rt hand upper bar lit up)
then I press the button to change the power range & nothing happens. How can I tell when the power range has changed??
Any help is appreciated thanks!…

changing the power to 25mw or 200mw or 600mw is NOT in how he described im not sure what power he is talking about there BUT if you want to change the MW power after powering up the quad hold down the button for two seconds the first number without the little dot is the channel then hold again for 2 seconds this number is the Fq then hold agin for 2 seconds this is your 25mw 200mw and 600mw 1. is 25mw 2. is 200mw 3. is 600 mw after changing to what you want press and hold for 2 seconds done :)

Does this Vtx have a built in LC filter? I have one and I am getting some banding. I have powered my fpv cam and Vtx off a 12v polulu on the pdb. If the Vtx has a filer, I wonder if it might be better to power the camera from the 5V output from the Vtx?

How do I tell this newer, better version of the Foxeer from the old one?

the colour of the label is different.

The old version was outputting 100mw when set at 25mw, is this more accurate

yes they have fixed the issue in the latest batches.

i juste buyed it.

very cool ..i’m not ok with you oscar when you said :”it does take a moment to understand your current channel and power and to change setting.” …
it is not so difficult !!

I never tested the 600w position . i’m to much afraid to burn the vtx with this high power…
do you notice problems with the 600w option ??

Is this compatible with any 5.8G monitor or goggles? Will it work with Fat Shark Dominator V3 goggles or would they require FS Cam and VTX?

Other than the mw adjustability, is there any reason to get this over say, a Foxeer fixed 200mw or 600mw? I ask because it seems that usually more features/ electronic complexity means higher failure rate. I fly solo (aka:no friends), but the ability to change mw would be good to have if i ever do fly with others!

if the power switchable feature isn’t appealing to you that there isn’t much reason why you need to get this VTX over others :)
if you only fly solo then a fixed power one should suffice :)

I don’t fly in groups much and all my quads rock the immersion rc 600mw it takes some beating Oscar,until full hd becomes affordable i will stick with them.

if it works for you then you should keep it lol :)
it’s just for people who are looking for a new VTX, and I don’t see any reason why they should buy an outdated product.

Hi Friends.
Actually, I’ve tested a lot of video transmitters, and the one which gives the best quality in my Dom HD V2 is the immersionRC 600 mw.
Of course, it’s big, but if your quad can afford it, I recommend it over all other transmitters.
I’ve switched my Tbs Unify pro HV with the immersionRC and I’m so happy !
Only Aomway 200 mw is at the same level of sharpness…and of course it’s very tiny.

PS : To Oscar (sometimes, it’s not because it’s old, that it’s necessary bad ;-) Listen a Lamp amplifier, and you’ll understand !)

it’s not just image quality, but also other features, channels it supports, size, and price :)
besides 600mW is too much when flying with a group and in garage :)

would you recommend this over the ImmersionRC 600mW oscar? Im looking to run it along with a fatshark dominator V3 and i have particular interest in getting the more range i can…… thanks for the post btw ?