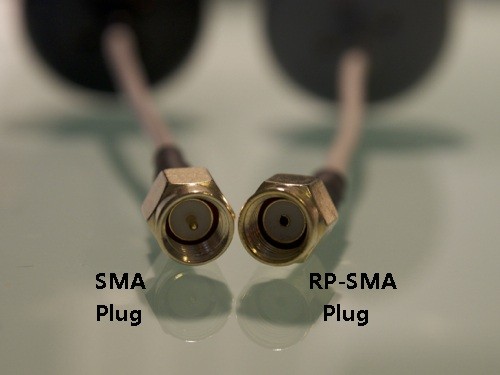 SMA (RP-SMA), MMCX and U.FL are the three main types of connector used in FPV transmitters, receivers and antennas. The many types of connector can be confusing for beginners.  In this guide I will explain the differences to help you avoid incompatibility in your equipment.

SMA stands for Sub-Miniature Version A, these are coaxial RF connectors developed back in the 1960s.

Originally, SMA and RP-SMA connectors were used in almost all FPV equipment thanks to their robustness and versatility, even today it’s the most common type of connector. Another advantage of SMA is durability, as it allows 500+ mating cycles according to Wikipedia.

Differences between SMA and RP-SMA

RP-SMA stands for Reverse Polarity SMA), it is a variation of the SMA connector which reverses the gender of the interface.

When it comes to video or signal quality, there is absolutely no difference between SMA and RP-SMA. However, I believe SMA is unofficially the standard for analogue FPV system, as there appears to be far more options in video transmitters and antennas with SMA connectors than RP-SMA.

Just remember this – an SMA antenna basically has the pin in the middle while the RP-SMA antenna is the exact opposite with a small hole in the centre. It’s not that hard so I’m not coming up with a nursery rhyme to memorize it like some others do. :-)

When buying FPV equipment with an SMA/RPSMA connector, we urge you to double check if the product description matches the product image to avoid surprises. Sometimes even the manufacturer can get it wrong.

Some people prefer RP-SMA over SMA, because the female contact (hole) get worn out faster than the male contact (pin). That means the pin would be on the video transmitter (RP-SMA female) while the hole is on the antenna (RP-SMA male), when the contact is no longer effective you could just change out the antenna. But honestly this is not something you should be concerned about as SMA connectors are extremely durable.

Can I use connect SMA to RP-SMA?

When you connect SMA female to RP-SMA male, both connectors don’t have a pin, so the signal is not connected. DO NOT put a pin between them, you will break your VTX or antenna.

When you connect SMA male to RP-SMA female, both connectors have a pin, so you won’t be able to fasten the antenna securely. DO NOT remove the pin, you will most likely just break it and it wouldn’t work properly.

If you happen to have antennas of the wrong connector, just get an adapter for it. 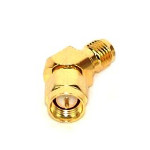 Note that there will be a tiny bit of performance loss to every adapter you use, so avoid it whenever possible. It’s not much, straight adapter has about 0.1dB loss, right angle adapter has about 0.4dB loss. To find out how much loss to your FPV range, you can use my FPV range calculator.

To replace the RP-SMA to SMA or vice versa on a video transmitter, simply cut off the bulk of the connector with some wire cutters or a dremel cutting wheel, and use your iron to remove the remaining little legs off the VTX surface. If you’re really handy with an iron or have a heat gun, you can remove it without needing to cut anything off.

The signal line runs inside along the middle separated from the ground shielding by a silicone or plastic layer. Do not accidentally short signal and ground when soldering.

The intent behind creating RP-SMA was to comply with specific local RF regulations. The manufacturers had to make a new non-standard antenna connector for their WiFi devices that was hard to find replacements for (as they were all regular SMA before that), to prevent consumers from connecting higher gain antennas and therefore breach compliance. So they just simply swapped the locations of the centre pin and hole between the male and female connectors.

The term “reverse polarity” here basically means the change of gender. It might confuse those who are not WiFi engineers, as polarity elsewhere in radio frequency literature can refer to the electromagnetic polarity, not to a change of gender.

SMA are great, but they are also fairly bulky and heavy. Every gram counts when it comes to FPV drones, so UFL is introduced to video transmitters.

As known as IPEX, U.FL is a miniature surface-mount coaxial connector that has been widely used in small size video transmitters and antennas. They are also very popular in radio receivers due to their compact sizes.

U.FL connectors are way more fragile than standard SMA/RPSMA connectors and have much fewer mating cycles (30+ according to Wikipedia). 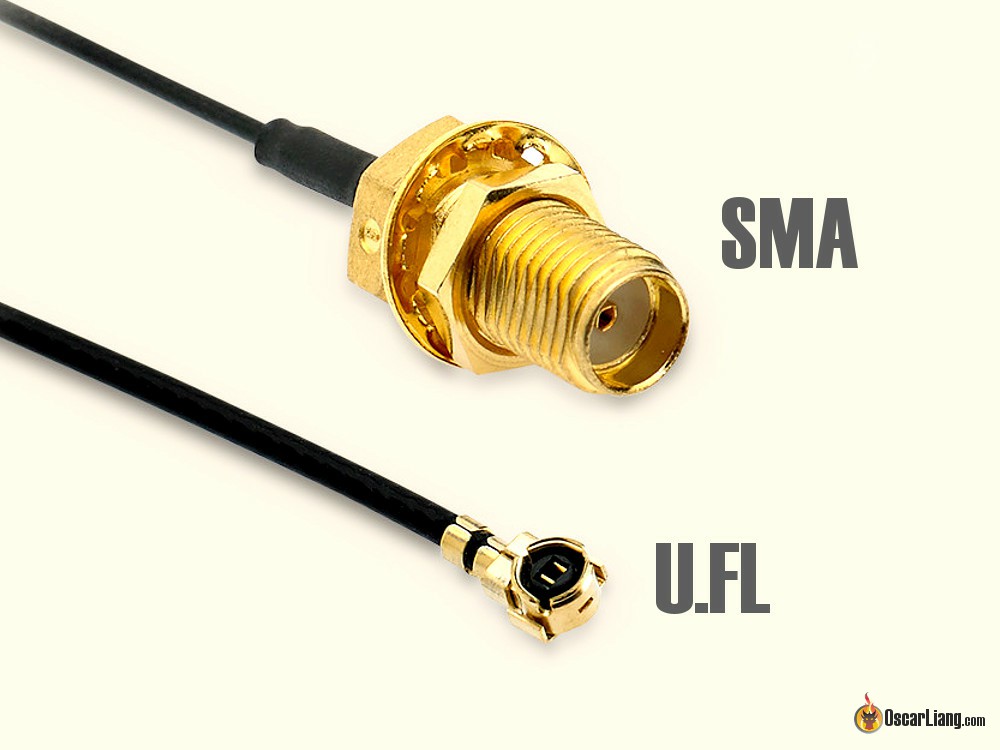 But in the never-ending search for shaving weight, this is absolutely a great choice. You can also get UFL to SMA pigtail adapters. 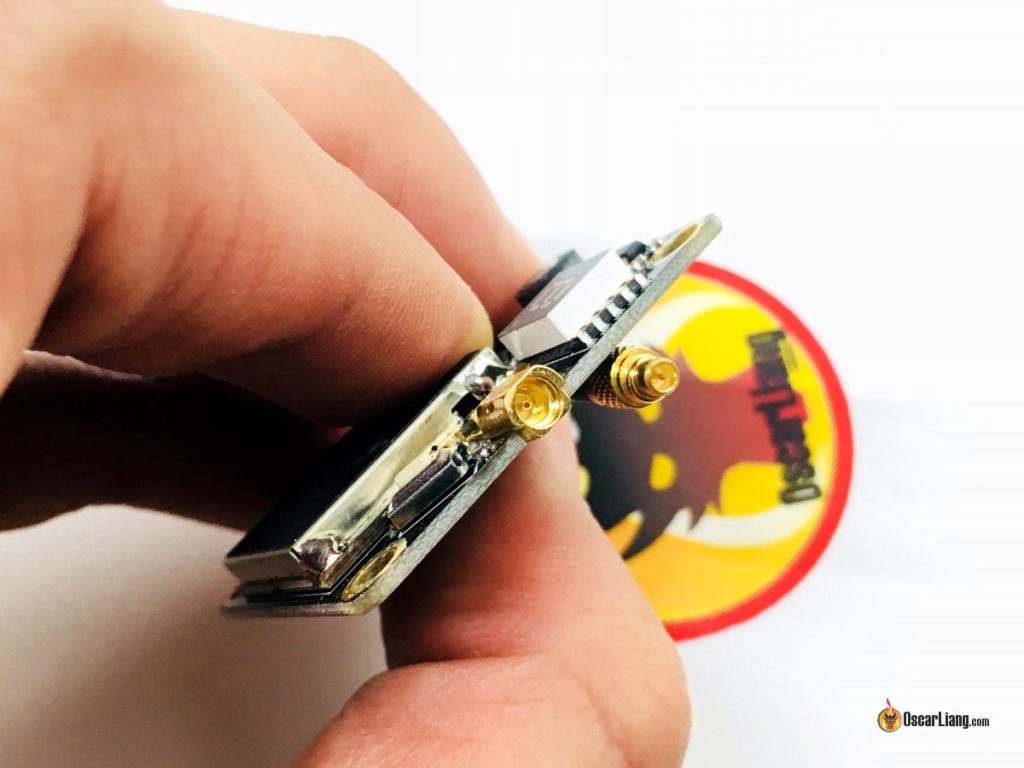 SMA is too big and heavy, U.FL is too fragile, and the MMCX is the best balance of the two!

MMCX connectors are slightly smaller and lighter than SMA connectors, but much tougher than U.FL. Rated for 100+ mating cycles, more and more VTX and antennas are using MMCX and we can only expect it to play a bigger role in FPV.

Hopefully this helps clear up the differences and provides some useful tips. If you have any suggestions or comments please leave them below. Thanks for reading and happy flying!

How to Fly FPV in the Winter!

Useful information. Lucky me I found your website by chance, and I’m shocked why this accident did not happened earlier! I bookmarked it.

Is there a connector similar to RP-SMA, but smaller?

I have an antenna that looks exactly as RP-SMA, but it is only half the diameter

Hello sir,
Thank you for this article.
But still, I have a question that, If there was an SMA connector in the market then why they discovered this RP-SMA connector?
is there any difference between the data rate or in any technical specification? (Other than the physical appearance).

Your questions were explained in the article.

I see SMA-K connectors appearing when searching for RMA connectors. Where, if at all, do these come into play in a build?

Hey Oscar,
I have a question about replacing my vtx antenna cable on my Tramp VTX. The stock antenna connector was torn apart after a heavy crash – in order to avoid this in the future, I’m planning to use a 15cm SMA->IPX connector with additional strain relief points on my frame. Is 15cm too long for 5.8 gHz or will my Video Signal still be good?

It’s a shielded wire, as long as you are using good quality wire, 15cm shouldn’t be a problem :)

Hi, how about the pigtail’s cable? Is the black one like in your picture good enough? Or should i buy like in banggood from your link?

I have sma connection on my true D and noticed that antenna A the pin hole has gotten a lot bigger than antenna B if the hole is to wide would it make a difference? I’ve been getting really bad performance from my true D and wondered if that could be the reason.

Just saved me from a wrong purchase. I have SMA and not RP-SMA connectors. Here is my rhyme to remember.

Sma is male and female like you and me.
RP sma is the opposite you see.

Some would better understand that RP-SMA is the Transgendered version of SMA without a change in reproductive organs. so, ReProductive (RP) the SAMe (SMA)! This could confuse other even further.

Ah, so I can swap a UFL Rp-SMA pigtail with UFL Sma pigtail.. or the other way around. I thought so. Awesome

I am citing your articles in my final paper I’m doing about (quad)copter Racing. So I just wanted to ask where you source your information form and if there is anywhere I can check those out? They’re really nitpicky about citing and stuff, so while I believe you are a trustworthy source with a lot of knowledge it would still be beneficial to know how you know this stuff.

the info are mostly from what i learned on various forums (probably involves hundreds of posts), and talking to many people in the hobby lol :)
some info are from wikipedia, so that would probably be the only possible place I can cite

So, to remember, SMA is like mainstream sex (no offence intended):
The female part has a hole and the male part has a pin and wraps around the female.
Makes sense….

No i want to try out putting a spironet antenna on my wifi router.

LOL how about even a helical?

great blog and vids man! Just wondering if you had any signal decrease due to an rp-sma extension cable?

Hi, I like the info but I believe there is a mistake. I work in the plumbing industry and deal with male and female threads all day and I believe you have them mixed up. Short of a lesson in the birds and the bees, but a male thread goes inside a female thead. So the male body has the outside threads and the female has the inside thead.

I don’t think there’s a mistake, that’s just how the world decided to call these connectors.

Male connector pins are often protected by a shell (also called a shroud, surround, or shield), which may envelop the entire female connector when mated. RF connectors often have multiple layers of interlocking shells to properly connect the shields of coaxial and triaxial cable. In such cases, the gender is assigned based on the innermost connecting point.

However I’m not sure if RP SMA connector genders are swapped because of this, or if they just keep the gender of their original SMA counterparts.

I believe it was meant as a compliment. As in the only web addresses in his browser history are pages from your incredibly informative site. However I could be wrong.

Your site is hijacking my browser’s history! That’s EVIL behaviour, don’t you know that???