Antenna gain determines your maximum range, however antennas don’t simply amplify radio signals without costs, it just changes the radiation pattern which is a trade-off between coverage and range.

Antenna Gain In A Nutshell

An ideal isotropic antenna with 0dB gain, radiates signal equally in all directions with zero losses (think of a sphere). But it doesn’t exist, there are directions in which a real antenna will radiate the strongest, and others in which it doesn’t radiate at all.

This is why a typical omni-directional antenna would have a low gain between 0dB to 3dB, and it can radiate signal fairly evenly in almost all directions, more like a doughnut shape but not a perfect sphere. 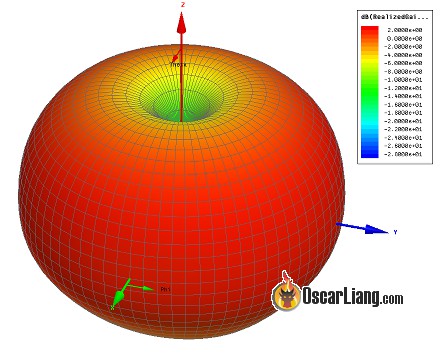 Directional antennas have much higher gain, and they focus the signal into one direction in order to achieve more range.

Every antenna receives the same way as it transmits, so an antenna’s reception gain is always the same as its transmission gain.

For a basic overview of FPV antennas, make sure to check out these guides:

Antenna gain is the measure of antenna power in decibel (dB), which is equal to 10*log(Pout/Pin).

Don’t worry about it, just remember that the higher the gain, the more directional an antenna is – more range, narrower beam width.

A 3dB increase in gain doubles the signal power, and a 6dB increase doubles the range. However, as mentioned, directional antennas are not amplifiers. It’s only focusing all the energy into a narrower beam.

A water balloon is a good example.

The volume is the total power of your VTX (or think of it as the signal coverage), and it doesn’t change no matter how you squeeze it or pull it, it’s still the same amount of water in there.

By using an antenna of different gain and radiation pattern, merely changes the shape of the balloon. The balloon might become longer, but the width becomes narrower, and so the total volume is still the same. 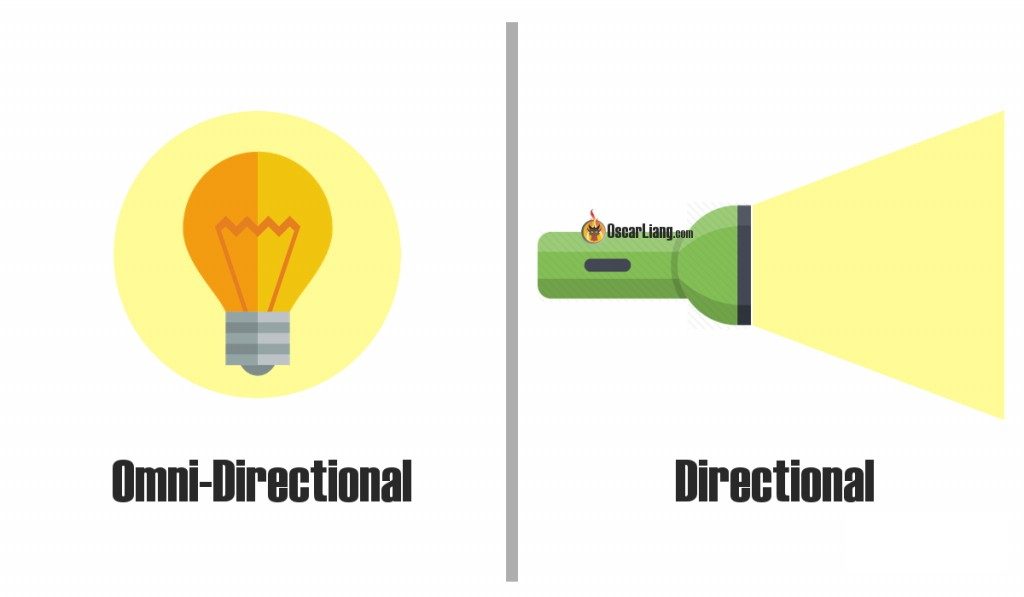 Although signal reception becomes narrower with increased antenna gain, a common technique is to use a diversity receiver. It allows multiple antennas working together, constantly checking signal strength of each antenna and pick the one with the strongest signal. This way we have longer range and wider coverage.

Once you understand the basic concept, you can check out how to use antenna gain (in dB) to estimate range.

Every antenna has a different radiation pattern.

A radiation pattern of the hypothetical isotropic antenna at 0db gain. It’s a nearly perfect sphere in both vertical and horizontal axis. 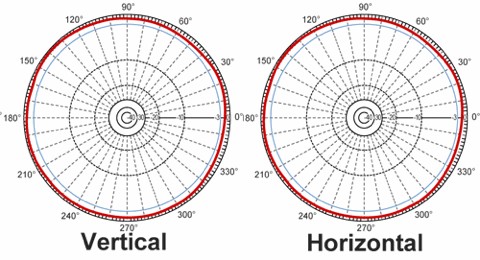 This is a standard omni-directional 3dB rubber duck antenna. Notice it has significant signal loss on the top and bottom (90/270 degree). Similar radiation pattern applies to most omni-directional FPV antennas out there.

As you can see the gain actually changes depends on the direction you look at it. So when we speak of an antenna’s gain, we really mean its maximum gain in a certain direction. 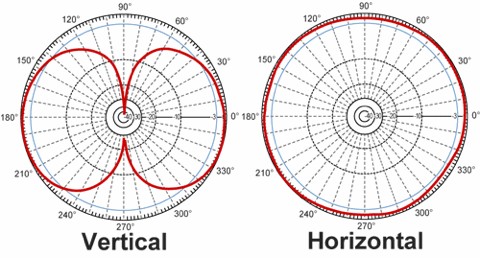 In 3D this radiation pattern looks like a doughnut :)

And here we have a directional antenna of 8dB (a patch antenna). As you can see, majority of the signal focuses on one direction, and not much range at the other end.

How to Increase Range?

There are normally 2 ways to increase range of your FPV system: to increase the power of the video transmitter, or use higher gain antenna on the receiver end.

Increasing VTX power would be the last thing I would suggest, simply because it might not be legal, and it will consume more power and generate more heat. Try upgrading your antennas first and find the best combination for your specific application and flying style.

You *would* simply add them together, if amplifiers and antenna used the same db. So it would be 17dBi, if it in fact the amp was 5dBi.

Good stuff, you should set up something to do consulting for pay! You break it down clear and simple.

In regards to this article, what would the cumulative effect of an amplifier AND directional antennae be. Ex, a 5dBi amplifier gain paired with a 12dBi Yagi antennae gain? 17dBi or would it be exponentially more

awesome information. I usually fly alone so the high voltage on my VTX isn’t a problem there but after reading your comment, I think I will drop it down to 250 or maybe 400. I can usually get about 3 miles with 1.3ghz and my IBC Pepperbox but would love to go a little further. I have a RC Gatling too but get about the same results.

Great article I have ever read on antenna gain.

With all due respect, I think I have to disagree a little, from what I’ve read dB simply means decibel in reference to something like power emitted from an amplifier, antenna alone do not create or have decibels. I’m doing research trying to figure out how to understand all the different ratings manufacturers put on antennae, and they all use dB, but with one or two letters attached to represent a power value relative to something else. Like dBm expresses the power (in dB) relevant to 1milliwatt. What I have found is that most fpv antennae are listed as dBi or dBic, which the I’m still trying to get more sound understanding of, with the latter being a little more difficult to get my head around. Apparently dBi is dB gain related to an isotropic radiator, which is an impossible factor, but a set impossible factor as to rate different antennae. Here’s a link that started me down this path, thank you in advance for info you could provide to make this easier to understand. researchgate.net/post/What_is_the_difference_between_antenna_gain_measured_in_dB_and_dBi

It’s common to list amplification in dB only for mathematic sake. Since RF engineers traditionally use logarithms to add and subract sources and losses (versus a series of multiplications and divisions), you need to convert the gain multiplier to a logarithmic value (e.g. P*G = 10*log10(P)+10*log10(G), where the right-hand side is converted to dB).

@the person asking for a directional omni- look into the mx-air.

Oscar Liang is right that there’s technically no such thing, but officially the mx-air is such a compromise.

Truerc is making antenna with all sorts of patterns, but they all obey the laws of physics as described in this post.

My goggles is Fatshark recon v3 and has no diversity.

Are there any sort of 2-in1 attenna with both path and omni together?

Or are there any good omni that can do good range.. I am just looking for 1-2km thats all. I have Flywoo Explorer lr 600mw vtx.

Hi Oscar, great blog and I read lots of your articles already (especially when learning about Naze32, Cleanflight and PID tuning).

Have you seen this thing here:
celestialreach.com/Products/ClearBoost-Enhanced-FPV-Drone-Video-Reception

Would be interesting to see what someone with your knowledge think of it. I’m a bit sceptical that we get a lot of gain on the receiver side – but it would be way more elegant than using 10watts in the air ;-)
greetings, RCSchim

I want to ask what is affected by the transmitter signal in 5.8ghz ?