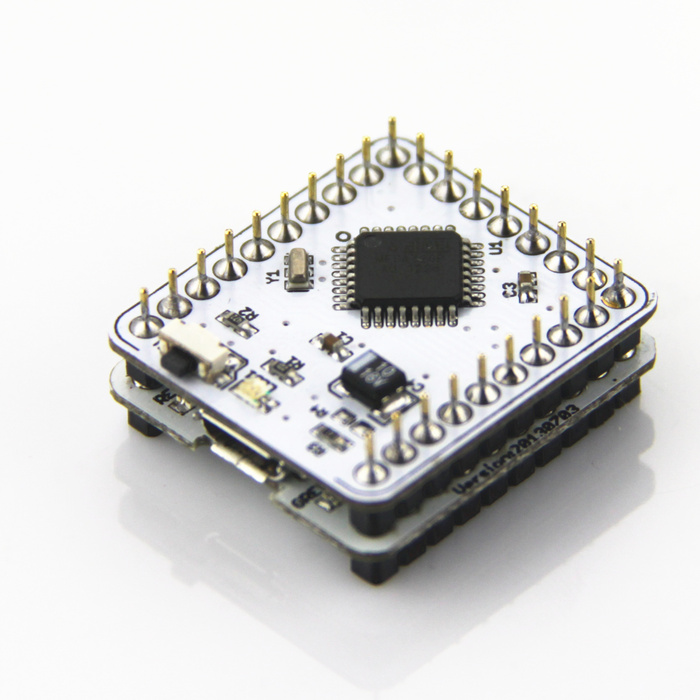 The Arduino microcontroller board is very popular with DIY projects which is about the size of a credit card. This makes it suitable for embedding into many electronic devices. However when we want to go smaller, there isn’t many options available. Fortunately, the makers of Microduino has created a much smaller version of Arduino. it’s at 1″ × 1.1″, nearly as small as a quarter. Microduino is a low-cost and tiny Arduino-compatible board without scarifying the extensibility and easy of use of a normal standard Arduino board.

Microduino’s boards and extension modules were created to help users reduce prototyping and development cost. Each board only has the necessary circuits for their specific function which minimize the cost and size.

What can it do?

The Microduino separates the capabilities of an Arduino Uno into two boards, with one acting as the microcontroller core (Arduino Minimum system) and a second used to communicate with a PC. Once an Arduino-compatible program is uploaded onto the core board, the secondary module for communication with the PC isn’t needed. All core boards and extension modules use the same U-shaped pin-out, which means they can also be stacked together. 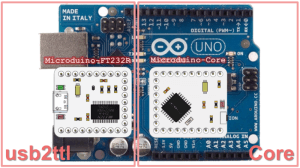 One reason we want smaller version Arduino is about prototyping and production. When prototyping using standard size Arduino are fine, but when you are in production you want to keep the size of the product small. If you are producing a large quantity, it’s possible to redesign the circuit to simulate the arduino in smaller size. But what if we are making it in a smaller quantity? Microduino becomes handy in this case. It helps to get more prototypes for testing and concept validation before taking the next painful and expensive step of design for manufacture.

Microduino Studio‘s CEO originally built the Microduino for his own use for monitoring the temperature in a server room. Later on he made it open source and started designing many extension modules with his team.

In the past shrunk versions of arudino have always been popular (one project last year actually pledged over $300K!), without exception the Microduino is attracting a lot of people’s attention, and it has finished it’s target funding of $20K not long after its start of kickstarter campaign.

What Microduino extension modules are available?

There are already many extension modules providing capabilities like Wi-Fi, 10 DOF Sensor, Ethernet, GPS, a motor/stepper driver, sensors, OLED display, SD card, Bluetooth, an amplifier, and more. I am sure there will be more extension modules for the Microduino, such as remote control of household objects or a bicycle computer with a GPS data logger and display etc.

Shipments are expected to be made in November 2013. Packages start at $20 for the core board and PC communication module, and they get progressively higher depending on how many extension boards you want. $330 will get you all of them.

Watch this video or visit the kickstarter page for more info.

Arduino TRE is 100x more powerful than Leonardo or Uno

Useful stuff. It’s difficult to find knowledgeable people for this. Seems like you understand this area! Thanks