Raspberry Pi Heat Sink – Do you need it?

Do We Need Raspberry Pi Heat Sink For Cooling?

Some people believe Raspberry Pi Heat Sink is necessary. But for any normal use you do not need to cool the chips on the PI with heat sink, unless they get much hotter than a 100 degrees Celsius! You can find an example of an absolute maximum temperature for silicon devices for example. 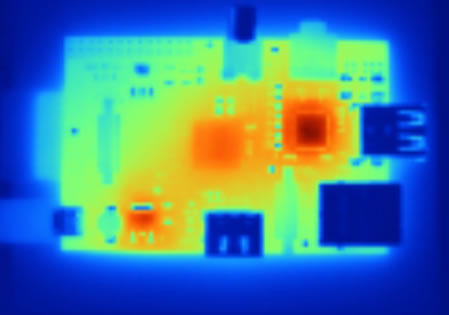 What The Raspberry Pi Guru Says?

When you overclock Raspberry Pi (Speed it up), it will generate more heat. But the only reason to we want to cool them isn’t for the speed but life of the chip. Operating under hot temperature for long period of time could cause damage to the chips on the Raspberry Pi.

In my opinion if you are using your Raspberry Pi within the normal use, then YOU DO NOT NEED Heat Sinks for your Pi. However if you use it outside of the “normal” use (like overclocking), it may benefit from heat sinks. A close case with a venting fan would also help as well as the raspberry pi heat sink.

Of course if you just want to dress up your Pi, the heat sinks will not hurt it either. :-) It comes down to the fact that you do not need to waste your money on heat sinks!

I think it’s just some of those old school people who believe in using heat sinks for every chip has when you are/aren’t overclocking.

Raspberry Pi Heat Sinks are about $2.25 to put them on, so it’s totally up to you.

I’m using a FLIRC case and doing an ffmpeg which uses 100% of the CPU. My temperature has maxed out at 68C.

The FLIRC’s case is about $15, and becomes a heat sink for the entire chip. The box is pretty toasty, but not too hot to handle.

If you plan to use your PI for anything that might max out it’s cores, like video decoding, or encoding, or emulation in some instances, it’s worthwhile to do some cooling on it I think.

We have Pi’s that we have a 10x inspection camera running on to take still images. When the app is running the processors go from warm to very hot. heat sinking seems to resolve the issue.

The normal temperature with the original head sink is about 50 ° C (no full load) room temperature about 20 ° C.
What a need now is is a piece of copper to put my big head sink direct on the IC,
the temperature difference will then be 13 -16 ° C and that will work, not the original with is pure symbolic.

For nomal non overclocking you don’t need a head sink, unless constand working on full load, and then a big head sink !

what type of adhesive would you need and where would you purchase it? thank you.

Everyone seems to get pretty similar results, for instance; rootusers.com/raspberry-pi-heat-sinks-temperature-before-and-after/

I’d like to see how thermal tape vs compound would go, your thermal camera is very cool too :O

Very good article, Personally I think that it is good to have it especially if you are overclocking.. This article describes the benefits of heat dissipation techniques while overclocking.
stadar.org/content/raspberry-pi-overclocking-and-cooling