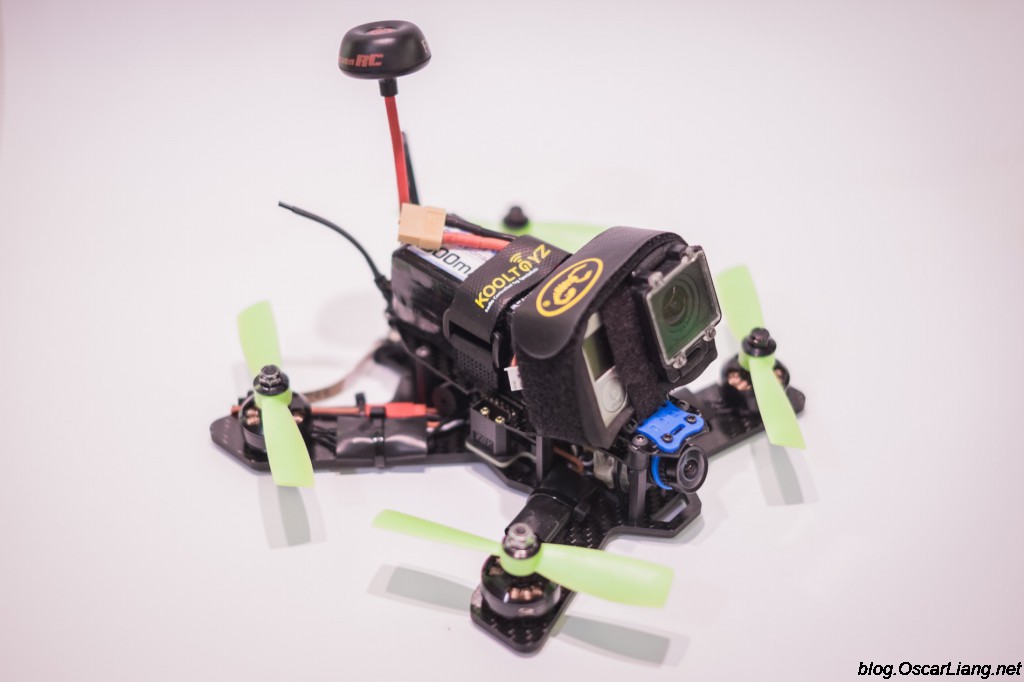 Get your Midge 180 frame from Kooltoyz. More information on their new website. 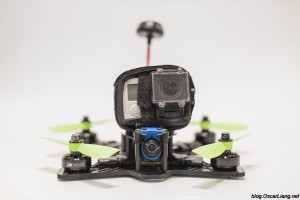 The Midge 180 has an unique design: instead of the typical X or H arms configuration, front and rear arms are of different lengths. The lines of motor-to-motor are not intersecting at the centre of the Flight Controller, rather I think they actually intersect in the frames centre of gravity (COG). Arms are quite wide. 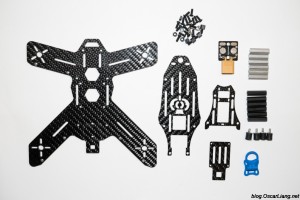 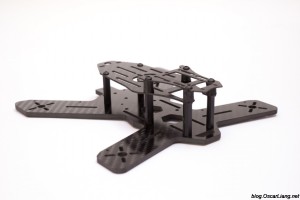 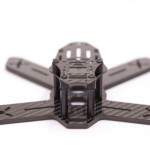 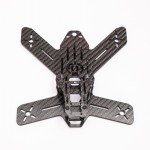 In the middle of each arm there is a cutout, looks like it was designed to pass a zip tie through it to secure the ESC. The distance between the edge of the arm and end of the cutout is enough to fit SN20A or LittleBee 20A ESC. RG20 and KISS ESC will also fit on the arms, but they might be too big to be mounted using these cutouts with a zip tie.

There are also tiny 1.5mm holes at the end of both rear arms. The purpose is to fit a LED bar that is available at Kooltoyz store. 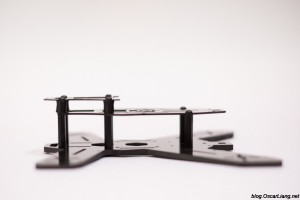 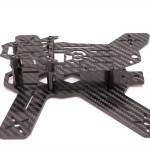 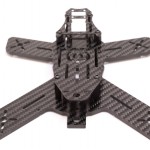 Bottom and top plates are held together with only 6 standoffs for minimum weight. Top plate has cutouts for:

HD camera plate is mounted on the top plate using dampening bolts. Aomway FPV camera mount is attached to it. Note that due to the low profile frame design, 25mm board camera won’t fit in there at all, only 17mm FPV camera can be mounted inside the frame.

A flight video from Artur with this frame! 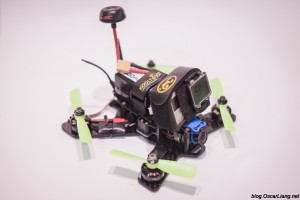 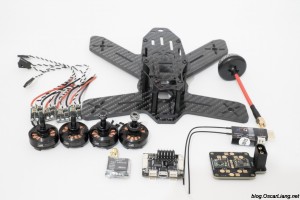 Initially I was going to use the mini Power Distribution Board that comes with the frame. But it was too limiting for my liking, so I decided to go for the Birdseye miniPDB that has XT60 connector soldered directly onto it. There was no extra wiring and soldering were needed, however that required modifying the top plate.

Exact spot where XT60 connector was facing up was obstructed by the top plate. I had to cut the bit of the top plate so lipo cable could go through there. 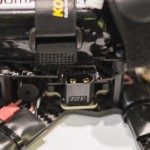 It is going to be a “low rider” build so minimal number of cables was very important.

After fitting ESCs and soldering power cables to PDB, I installed FC and organised signal cables to avoid clutter. 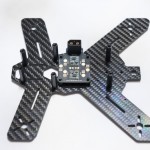 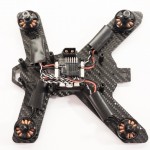 Initially I wanted to use DYS SN20A esc but for some bizarre reason I couldn’t flash them through BLHELiSuite (except for one!) and changed them out for LittleBee 20A ESC. (Probably because they have got SimonK Bootloader and not BLHeli Bootloader, you can change bootloader like this, but it’s quite a lot of work)

I decided to fit VTX on the bottom plate and not using any power filter (for the first time ever). 10cm SMA extension was tangled (due to length) and secured with a zip tie to the bottom plate.

I didn’t want to connect the antenna directly to VTX, because that would put too much stress on the VTX antenna connector in crashes. I installed LED bar to help other pilots to see my Midge in the air when racing, LED bar was soldered on directly to PDB: 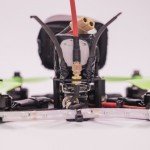 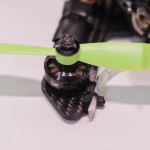 I swapped out the lens from the 2.8mm to 2.1mm. The wider angle lens makes it easier to fly in tight close proximity.

Unfortunately camera angle was kind of limited by the power/signal cables from the cam touching bottom plate. In my build angle is around 30 degrees.

With the Aomway camera mount, you need to adjust lens focus again after it is put on. It’s not a big deal but it took me a while to get it focus properly. 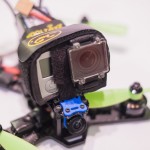 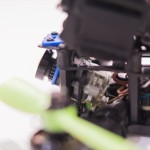 AUW without the battery and GoPro is 356g. With DroneLabs 4S 1500mah and a GoPro it is 600g. X4R-SB was attached to the underside of the top plate. 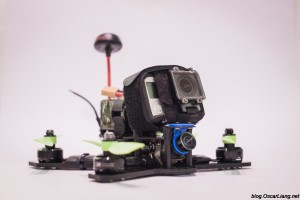 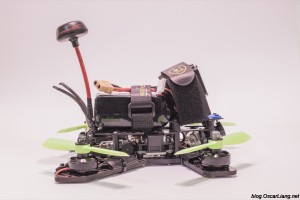 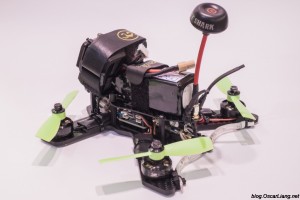 My overall impression of the Midge 180 mini quad frame was very good. Tough, little frame that can fly through a very tight spaces is just so much fun. The frame design is well thought out, with attention to detail although some small things can be improved.

Great things about the Midge 180

Things that can be improved on the Midge 180 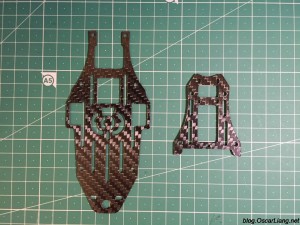 I have one of these wee badboys. Fast becoming my goto, especially for new territory as I know it’s coming out of pretty much any situation in one piece. At least the frame is any way.

Tough as old boots and flies great to boot. Very responsive and goes like it’s on rails as said by others.

Hi Oscar, great review. I have the 180 midge also, built up with 1806 motors running on 4s and it screams about happily. All up weight slightly under 600g. I also found it easy to tune and would like to re-iterate you point on the strength of the uni-body frame. I flew mine last week full speed into a steel girder at an indoor session, it killed my mobius but only left a small mark on the carbon. Tough as nails!

Performance wise as Buzzin G mentioned, it does run on rails, extremely responsive characteristics compared to my 250 and 275 quads. I dont have any other 180’s currently and dont think i’ll need one for a while with the robustness of the midge.

Thanks for the good read, and I look forward to seeing more from these guys.

I also have one of these Midge 180’s ( among 7 other race quads ) there truly is something special about this one, running T-Motor 2204 2300’s & little bee esc’s. Very fast for a 180 and flight characteristics like its on rails with minimum tuning from default, very easy to lock in. I’ve used it car parks and forests mainly, it’s been given a hard life and just refuses to break, well beyond the point where other 180’s would be in bits.

Hi Oscar
What u think of SPRacing F3 Flight Controller ? He felt difference from Naze32 Rev6 ? What do you recommend?

I like F3 flight controllers, but the SPRacing is too expensive :)
I am actually reviewing a F3 FC and i will publish my finding this week :)

Yes you are right! corrected :)

For those of us in the US and the kerfuffle we’re dealing with… what’s the assembled all up weight?

I think the sub-250 gram market is gonna get big in the next year.

it weights 600g including lipo and gopro, still a bit on the heavy site for a 180 i guess but she flies awesome :)