This article explains the basics of propeller (props) for quadcopters. We go over the concepts of pitch, shape, difference in the number of blades and how these affect thrust, efficiency and performance. On every quadcopter, there are two motors spin CW (clockwise) and two CCW (counter-clockwise). Therefore matching CCW and CW propellers are required to generate thrust, as well as having opposing yaw motion that cancel each other out in flight.

When you buy propellers, they should come in pairs of CW and CCW, or if they are being sold separately, make sure to grab both CW and CCW props. I actually like the idea of buying props in only one direction, because I tend to break more CCW props for some reason :) (related to being right handed perhaps?)

You can determine the direction of a prop by finding its leading edge. The propeller should rotate to the taller leading edge in order to generate downward thrust. They are also often labelled CW or CCW on the blade :)

By default, in most flight controller software such as Betaflight and KISS, the motors spin this way. CW prop on top right, and the two diagonal motors always spin in the same direction. The larger the prop (either increasing diameter, or pitch or both), the more energy it takes to spin it.

The Effects of Propeller Length and Pitch

Propellers generate thrust by spinning and moving air. When the propeller is spun faster, the more air it can move, and thus the more thrust it generates. Fun fact, your multirotor won’t fly in outer space, because there is no air and propellers won’t generate any thrust :)

By increasing either prop length or pitch, it gives more thrust and leads to higher current draw. Effectively it increases the surface area and drag, so more air can be moved and more power is required to spin it (assuming RPM is constant in this case). In a nutshell, larger propeller or higher pitch length will increase your aircraft’s speed but also use more power.

Generally speaking, a prop with smaller diameter or pitch can spin faster (higher RPM), because the motor doesn’t need to work as hard to spin it so it pulls less current. They tend to run smoother and feels more responsive to the sticks. The faster change of RPM due to less inertia helps stability of the quadcopter.

A higher pitch propeller moves greater amount of air, which might create turbulence and cause more prop wash. Props spin slower and you might find the lack of “snappy” feeling. But it generates more thrust and higher top speed in the expense of higher current draw. 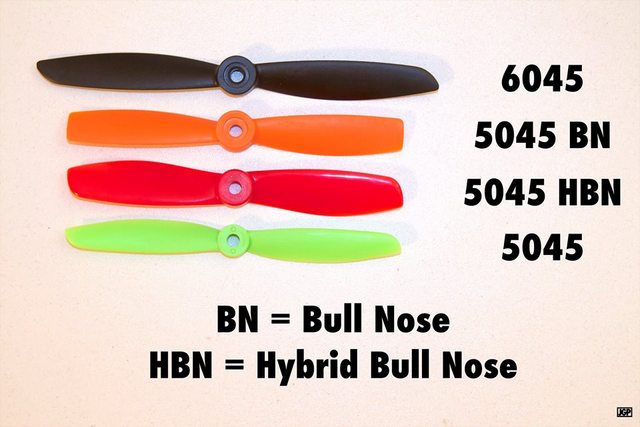 The more surface area, the more air the propeller can move and thus generate more thrust. But the downside is higher current draw, more drag and drop in power efficiency.

One of the things propeller designers have to do is to balance thrust and drag. You can only generate so much thrust before drag becomes too big.

The shape of a propeller plays a big role in performance because it’s closely related to surface area. The most distinctive difference would probably be the tip of the props: pointy nose, bull nose (BN) and Hybrid bullnose (HBN).

The shape of the tip also changes how the prop interacts with airflow when spinning, generally I found props with smooth/round edges perform more efficiently than blunt/square tip props. I have to say this is probably a personal experience, so please experiment with different styles to find your preference. For mini quad pilots, 3-blade (or tri-blade) propellers are equally popular as the two blades, they are commonly used in both racing and free-style flying. Some people prefer triblades because it has more grip in the air. Basically, by adding more blade it’s effectively adding more surface area, and therefore it generates more thrust in the expense of higher current draw and more drag. Propellers with even higher number of blades actually exist: quad-blade and even hex-blade!

The quad blade are said to be great in indoor tracks, and perform well at cornering. But the increases in surface area makes them really inefficient, and much lower in RPM. And for the hexblade? I wouldn’t even consider them at all, I think they make it for a joke :) simply too inefficient and draws way too much amps with any motors we have at the moment.

Basically the more blades, the more inefficient it is. There are 2 types of format that manufacturers use.

Sometimes you might see “R” or “C” after the size numbers, such as 5x3R. R indicates the rotation of the propeller, which stands for “reversed”. It should be mounted on a motor that spins clockwise. C is the opposite, should be used with motors that spins counter-clockwise.

Propellers can be made of different materials, plastic composite, carbon fibre, wood etc. Each type of material gives unique features, for example carbon fibre and wooden props are really stiff and best known for their smooth performance. While certain plastic compound are extremely durable. Check out this post for more info.

In fact, majority of the pilots in this hobby are now using what we call “durable plastic” props. They last much much longer and could save you tons of money in the long run. However, because they don’t just snap in a crash, they bend. It’s not obvious from appearance but they can cause vibration to your quadcopter, potentially giving your flight controller a hard time and leads to motor overheat. Make sure to make attention to vibration and oscillations when using these props.

And don’t use props with “white crease lines“. After a prop is bent it might develop these white lines and it’s a sign of asking to be replaced. If you don’t you risk snapping the propeller mid air and crashing.

In my experience, lighter props tend to perform better than heavier ones. A “heavy” prop generally means a prop that has more mass on each blade, and a higher torque loading. This requires a more torquey motor to spin it. Sometime people like to refer to a high pitch prop as “heavy prop” too, which can be confusing.

A lighter prop carries less moment of inertia. RPM changes faster and it makes your quad feel more responsive. Lighter props also work better on a wider range of motors, because they require less torque to spin up.

Weight distribution of the blades also makes a difference. It again affects the moment of inertia. For the blade’s center of mass closer to the hub is better for a propeller. Although that means the end of the prop gets thinner and easier to break. The more further away from the hub, the more drag there is and makes the prop harder to speed up and slow down.

The least rigid propeller I have ever used is the Gemfan 5030. They are so soft they literally bend when the motor reaches top RPM. Not only it will lose thrust and stability, it makes that crazy loud, high pitch noise! So rigidity is very important for a good prop.

Rigidity is affected by the type of material and how much material is used.

If you fly relatively slow and calm, any propeller should work fine for you. If you fly aggressively for example full throttle when coming out of a corner, you should consider using lower pitch prop. Also high KV motors are commonly paired with lighter props while low KV motors can be used with heavier props.

What Propellers To Use on a Mini Quad?

It really depends on the size of your motors and battery voltage. For 4S, this is the generally guideline:

To pick the right pitch, shape and number of blades, really depends on what sort of flying style you plan to do.

The more aggressively pitched props such as the 4.8 – 5.1 will give you a ton of thrust at the cost of high current draw. They also feel more “grippy” in corners and on the low end in general. This is great for freestyle pilots who do a lot of punchouts, and experienced racers would probably enjoy aggressive props too.

For a freestyler who go after the “flow” style and prefer a softer feel you might want to pick a lower pitched prop. Same goes for racing on tracks that are battery burners.

I also recommend lower pitched props to racing beginners, because it gives you room for error on the throttle and you will feel more in control.

You also need to verify if the propeller hub size (hole in the center) fits your motor propeller shaft. Fortunately nearly all 4″, 5″ and 6″ propellers are designed for 5mm shafts so there shouldn’t be any surprises normally.

It’s important to look up motor thrust tests data, and see which props work best with the motor you plan to use. The same propeller can perform very differently on 2 different motors due to design, torque, power etc.

Thrust Numbers are only Reference

Note that thrust number from a static test can be deceiving. These bench tests are done in static environment, therefore it doesn’t represent the motor/propellers true performance in real life. Prop and motor on a quad can generate 20% to 30% less thrust than being on a thrust stand, as well as current draw.

People also like to talk about “smoothness” a lot when describing how good a motor or propeller is. Which is not measurable quantitatively of course, and more of a pilot’s feel. Apart from the design which is far more influential, I’ve found lower pitch props are usually smoother.

It’s interesting to know that with a quad running heavy propellers that generate lots of thrust at low RPM, is not necessary faster than the one that generates less thrust but at a higher RPM.

An aircraft’s speed can be theoretically calculated this equation:

However in reality your quad will be much slower than this due to many factors including air resistance and angle of attack (forward angle to counter gravity in order to stay in the air).

So As you can see the overall speed of your quadcopter is really a balance between thrust and RPM.

As long as the motor/prop combo meets your amp draw requirement, you should try out as many props as you can to find the one that “feel” right for what you do. Hope this post has helped you select the best motor and propellers, and don’t hesitate to share your ideas or questions with us. :-)

13 thoughts on “How to Choose Propeller for Mini Quad”