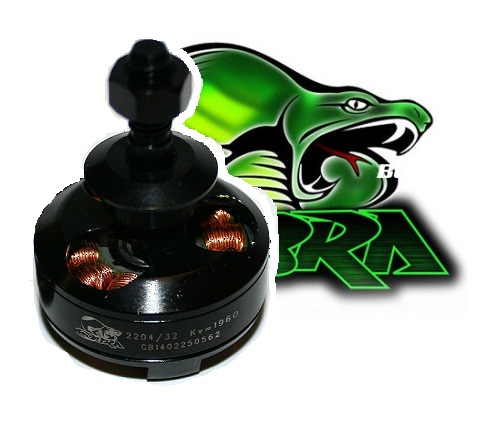 The name “Cobra 2204” have been mentioned so many times on many forums and discussion boards when people are discussing motors for small size multicopters, for example the 250mm Mini-H quad and the 290mm Spider hexacopter. Therefore I decided to give this motor a try too.

I really like these motors, they are efficient, and smooth. I use them on my mini quad, it weights 650 gram overall, and I use 4S battery with them. They only get a bit warm after a whole flight.

One problem I can see is the M5 prop adapter, they use grub screws (screws on both sides). I personally don’t think this is the best adapter for this motor, because it’s a bit too powerful. I have already lost two prop adapters after hard crashes (just gone missing). I like the Sunnysky and Tiger motors’ prop adapters more, they have 3 screws goes in from above, which seem to be a lot of secure.

For these mini multicopters with 3S, the most popular motors are the Tiger MN1806 and Sunnysky 2204. However many people wanted more power and stepped up to the 4S battaries. These motors are not meant to run on 4S, so they tried the cobra 2204 1960KV motors. The result turned out to be very good. Suddenly it’s one of the most popular motor for small copters, and it just went out of stock everywhere.

Talking about power, it’s really amazing that the Cobra 2204 motor can generate more than 500g of thrust max with 4 cell battaries (5030 props), given the size of these motors.

Someone on RC group did a test and found the Cobra 2204/32 1960kv motors can achieve as high as 83% efficiency compared to 60% from some other similar price and spec motors, under the same condition. Data quoted from here. Check out the data table.

These are the same motor, but some have green bottom and some black. Cobra 2204 motors have the standard 16×19 mm mounting patern. The thread is M2. Supplied in the box are M2x5mm bolts.

The green ones are the original version, designed for general purposes. They come with just a O-ring prop adapter and they have a motor sitting plate sticks out (the 4 tabs). 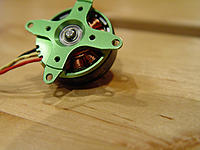 The black version are the newer batch and doesn’t have the 4 tabs at the bottom anymore. Supposedly it is designed for multicopters (since they have “multicopter” printed on their label), and they come with the bolt-on M5 prop adapter. 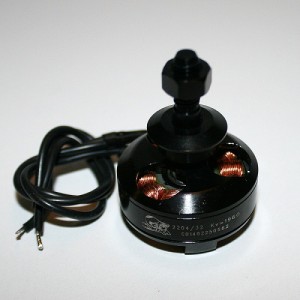 Anyway both have the same specification. There is also the 2300KV version for 3S and under.

It comes with some blue liquid in a bottle, it’s the loctite glue. Check out this post about loctite glue. It basically helps securing the screws.

It happened to me that in a crash my prop adapter just popped, and disappeared. There is no official source of prop adapter replacement, so I went looking for cheap alternatives. Luckily on the hobbyking site they sell them and they are “Prop Adapter – Nut M5x3mm shaft”.

These tests were done with a kitchen scale and OSD current sensor, so it’s not 100% accurate. It also differs from motor to motor. If in doubt, please run your own testing, below data is only for my own reference.

This Blog is 1 Year Old! And 1 Million Page Views!

Hi, i run the green version of these motors and they’re great on 4S but it’s a nightmare to change props due to the adapter/grub screws.
Do these black version have the prop adapter as part of the motor body or are they attached with grub screws ?
Thanks

Check out Cobra’s website, or email them see if you can get spare prop adapters: http://www.cobramotorsusa.com/
if not, I used this prop adapter, not perfect, but works: hobbyking.com/hobbyking/store/uh_viewItem.asp?idProduct=8888

I bought Cobra 2204 2300’s and rotorgeeks 12A ESCs. Are 12A ESCs enough or should I go larger. I was planning on running 4 cell batteries

i think you should go larger if you are using 4S on those motors :D 18A or 20A

What version of SimonK firmware did You flash to your ESC? I’ve got a problem with same setup. Got only 550g thrust with 3s (6045 hq) and 650. with 4s (6030).. should be about 200g more in both tests. I’ve got blueseries 12amp esc from dronematters with old version of SimonK firmware. Is it possible to flash theses esc with “Turnigy usb linker”? dronematters.com/index.php/turnigy-usb-linker.html

I like the helpful information you provide in your articles.
I will bookmark your blog and check again here frequently.

I’m quite certain I’ll learn many new stuff right here!
Good luck for the next!

Very descriptive blog, I liked that bit. Will there be a part 2?

magnificent publish, very informative. I wonder why the other experts of this sector do not understand this.
You must continue your writing. I’m sure, you’ve a huge readers’ base
already!

There’s certainly a lot to know about this subject.
I really like all the points you have made.

Pretty section of content. I just stumbled upon your blog and in accession
capital to assert that I get in fact enjoyed account your blog posts.
Anyway I’ll be subscribing to your augment and even I achievement you access consistently fast.