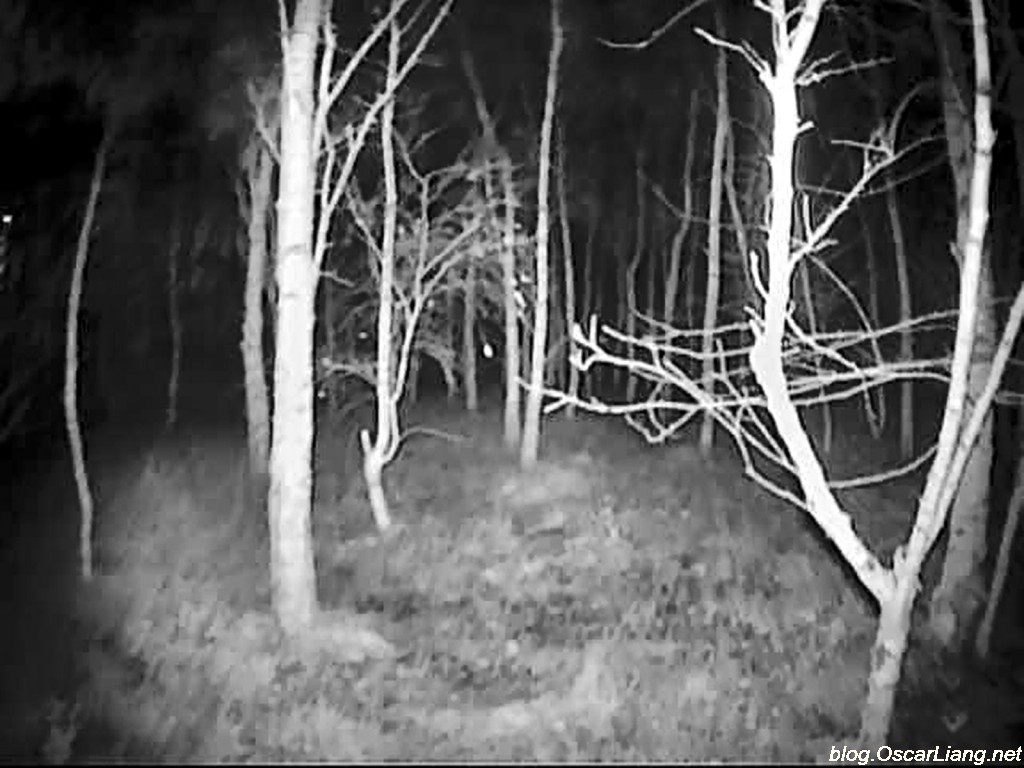 Flying FPV at night can be the answer to the cold winter with the days growing shorter. Getting bored of flying tiny whoop indoor? Let’s find out which camera is best for low light and night flying :)

There are so many great FPV camera options today, it’s hard to decide which one to get. I’ve tested a lot of cameras, and I’ve found the following options have the best performance in low light and night:

Here is a comparison video between these cameras. I tested them at night in two locations of different brightness level.

Hands down, the Night Eagle 2 Pro is the clear winner! It would be your best bet if you want to fly in the dark. But it only does black and white, so it might be less enjoyable to use in the day.

I really like the Falkor’s image quality in day light, probably one of the best. But I simply wouldn’t use it for low light or night flying. Especially when I found out it has a bug with “Auto Day/Night” mode. At certain brightness level it would repeatedly switch between color and B/W, causing the screen to flicker. So it’s best to set it to either color or black & white. Another cool tip I can give you is to set DNR from 0 to 1, it helps reduce digital noise in low light. I don’t notice any difference setting it any higher.

How Well Do FPV Cameras Work At Night?

Here is an example of how well these camera can perform at night. This is how dark the play ground is. 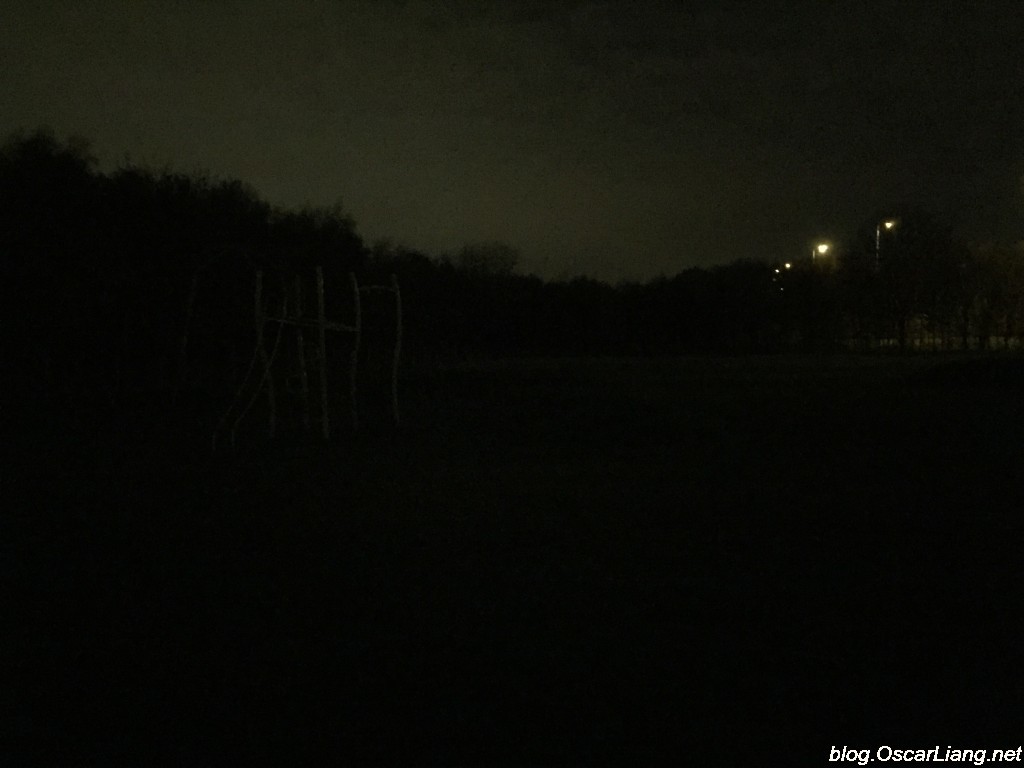 And through our low light capable FPV cameras, we could see a lot better without additional light sources. 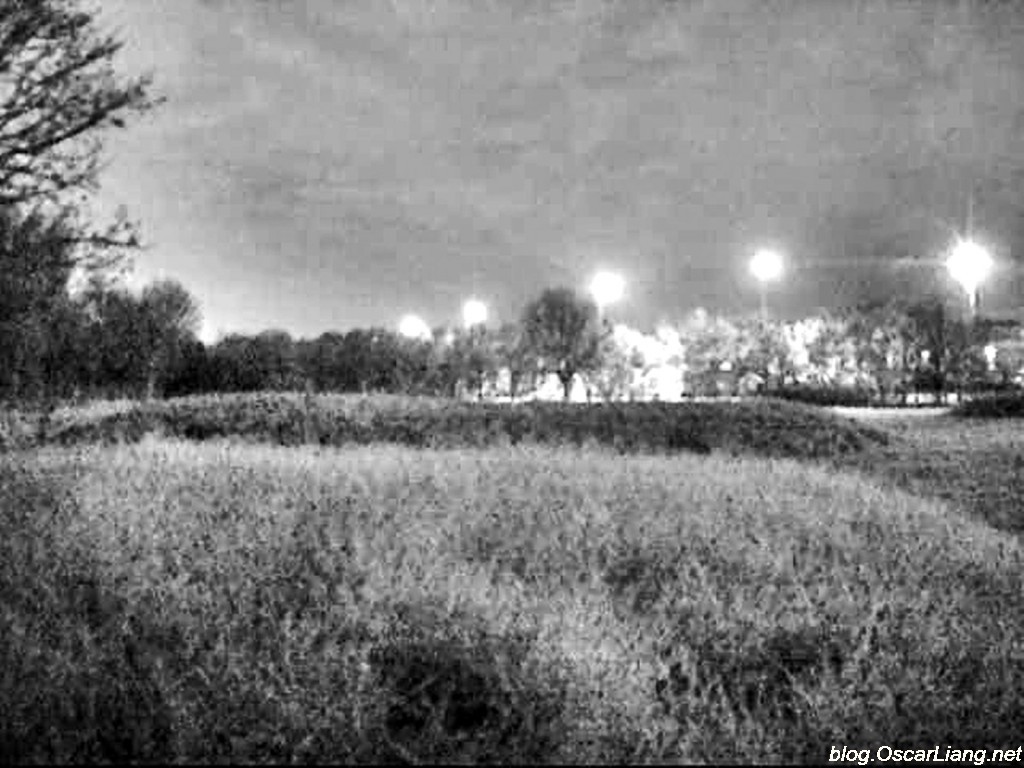 However, unless you are lucky enough to have a clear sky and a full moon, or some street lights nearby, your camera might still struggle a bit to give you a clear image.

The less light you have, the worse the processed image will be. In very dark environment, your image can look noisy and blurry, which is hard to discern anything in the footage you see and fly with that.

We can improve visibility in dark environment by adding a flashlight to the quadcopter. But yea, that will take away the stealthiness flying at night. Not only will your multirotor look like a UFO but you will also “blind” anyone that gets in front of your quad – including yourself if you are flying LOS.

My preferred option is to use IR LED’s (Infra-red). Due to the interesting nature of IR light, which is invisible to human eyes but digital cameras, it will work like a flashlight without anyone noticing it!

The best option I found so far is these 48 IR LED boards for around £8 (US$12) each. The only modification I had to do was to solder a female balance plug connector to the LED board, so I could connect it directly to a 3S battery. 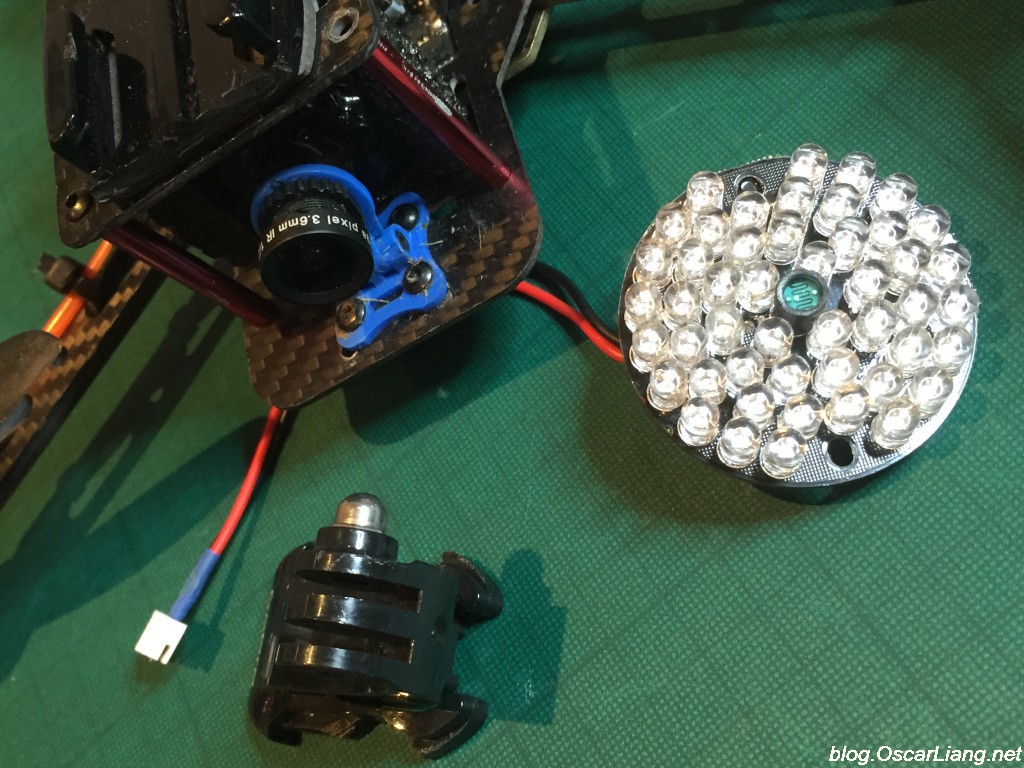 I simply mounted the LED board on a Gopro mount, and installed it on top of my quad. Works quite well because I can also adjust the angle. 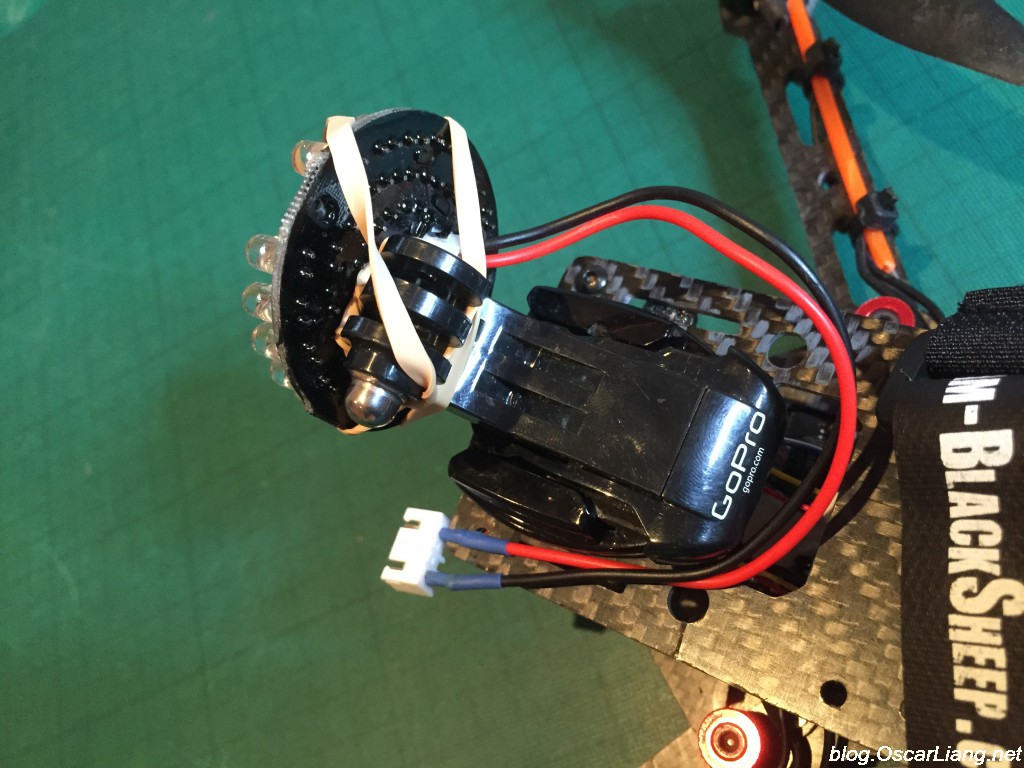 If you don’t have a GoPro mount, try this idea – shared with us by Konrad Stepanajtys. He basically mounted the LED panel on a cardboard box, which then goes on top of the quad. It’s like mounting a GoPro on your quad :) 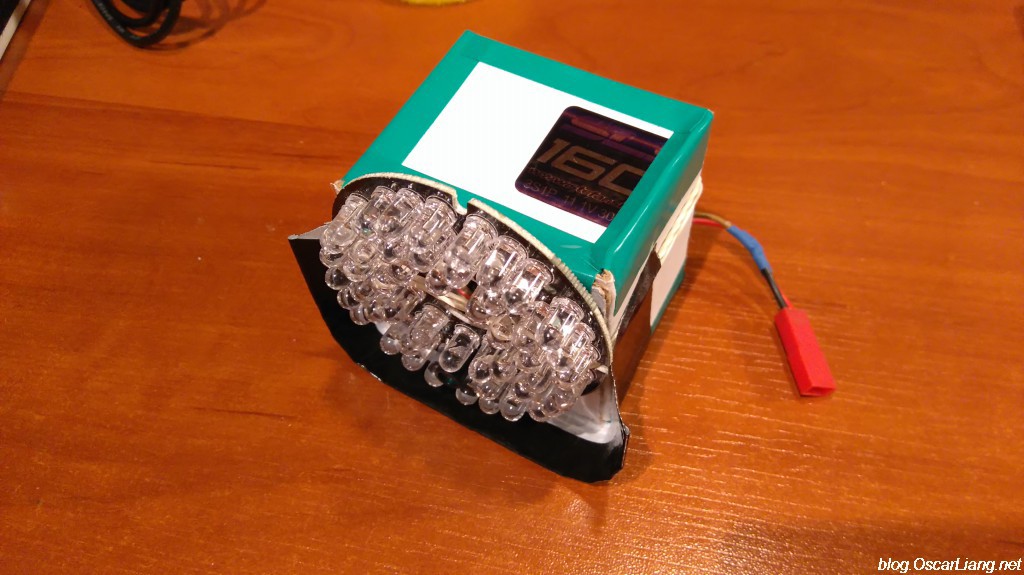 Remember to keep the LED away from the camera lens to avoid glare. 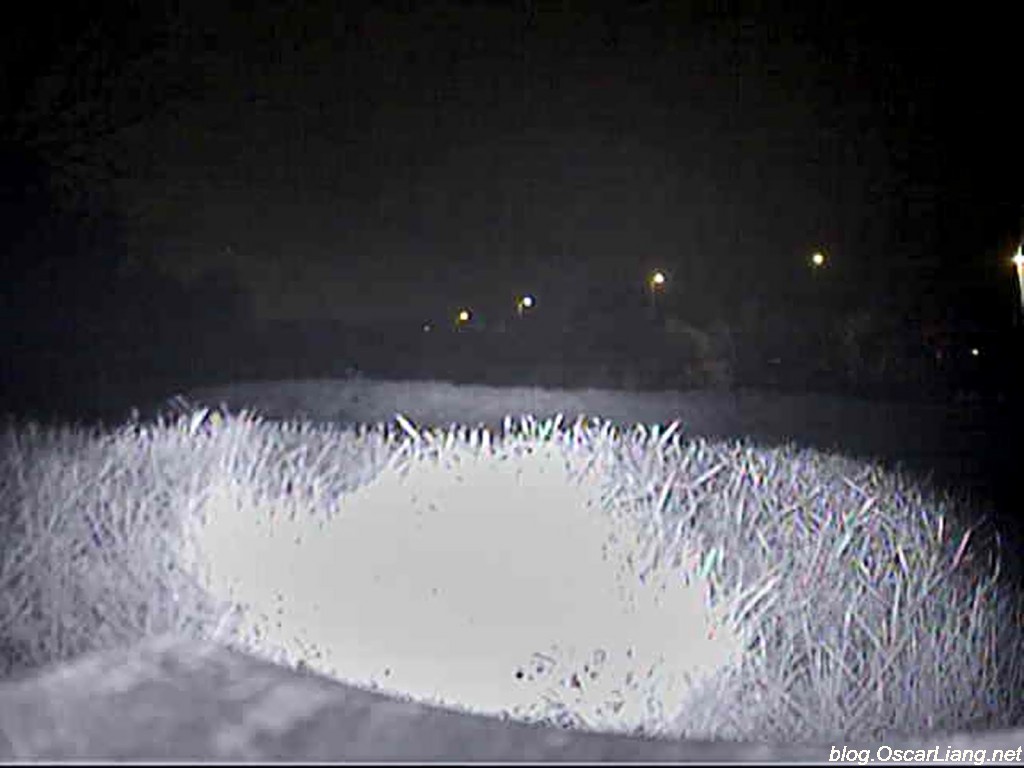 It’s not as bright as a normal torch, which is not actually a bad thing. At least you WON’T get a big white spot aiming at the centre of wherever you are looking at. Instead a soft, even, big glow in front of you. This is the result: 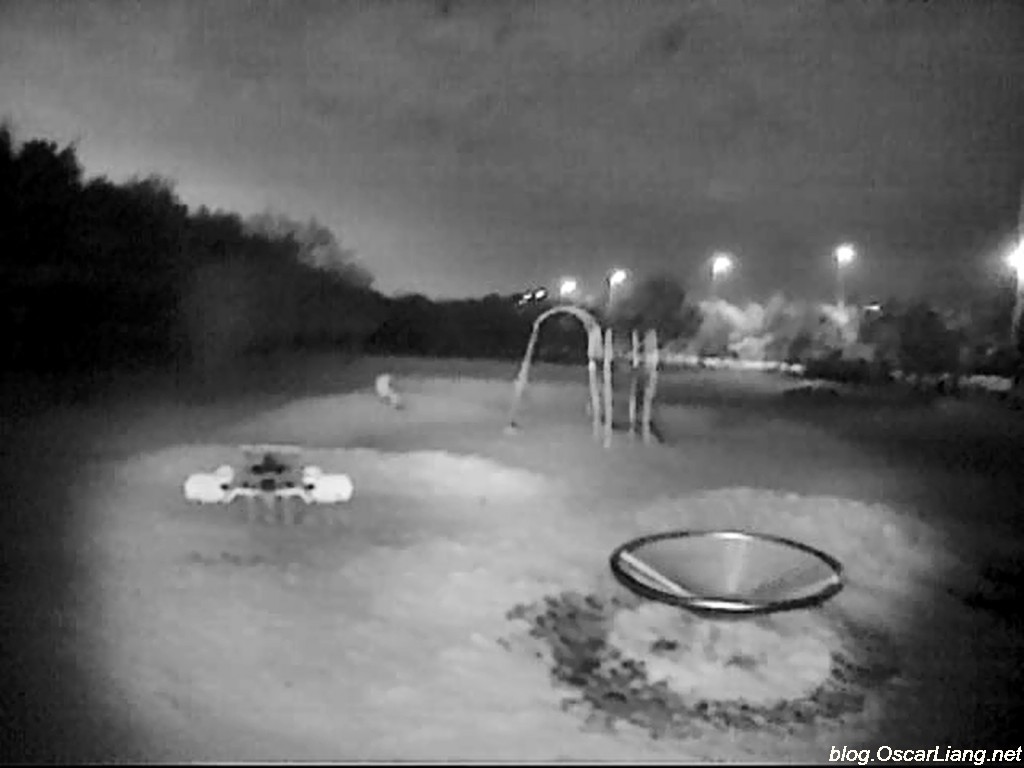 Challenges of Flying at Night

Flying at night is much more challenging than flying during the day due to the low visibility. Choosing your location is therefore very important, any light source would help tremendously, for example, lampposts. 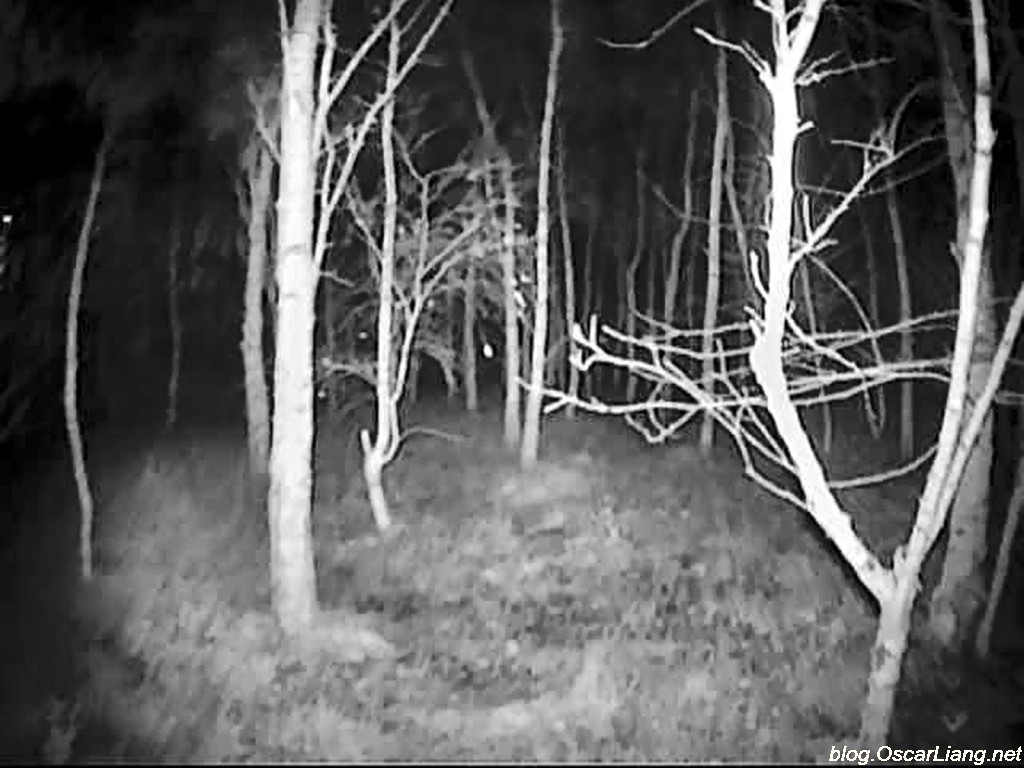 Another option is to mount a torch on your quad. Slowly exploring all the small gaps between trees and hidden paths in the woods at night can truly be wonderful and terrifying at the same time :D

To avoid losing a quad in the middle of nowhere, make sure to attach a buzzer with built-in battery.

If you are using the “DIY IR torch”:

Hanging Quads and FPV Wings on the Wall

Hi Oscar, long time reader and pilot. Love the article. Would love to have a 2022 update on the best night time cameras!

As an Eagle 2 owner, I am satisfied with its Night performance. I am getting a new Night Eagle 2 Pro. Your article really helps!

Hi Oscar, are you keen to review the last night fpv cameras?
The new one have a bit more sensitivity

We are currently reviewing the Night Eagle 2 :)
it should be the state of art in terms of night FPV camera.

Regarding the NUT, these are Bluetooth only (not GPS)?
I’ve read mixed reviews on the performance of these trackers (in general) – some work, some not at all .

Can I ask please, what mobile phone App you use to “track” the Tag?

Most of these nuts are based on bluetooth LE, which has poor range.
After trying a couple of those I found the KeyRinger, this system uses 2 identical tags which make a loud beeping pattern when triggered. Its twin hears the sound and starts making loud alarm beeps so you can localize it.
I’ve crashed my drones in nature a lot and have never lost any.
(I’m not flying long range though)

Hey everyone,
i’ve also been flying at night with IR LED and it’s great! even in pitch black i can see well enough to fly about 50% to 75% of my top speed. Hovering visibility is just fine and can see great out to about 30 feet / 10m. I use different IR LED’s that are from ebay. They are specified at 5 watts but i measured them at about 3 with my setup. I use 4 of the LED’s and angle them differently so all of my cameras FOV is illuminated. I pull about 20 watts or 1.7amps at 12V.
However: beware if the light from the leds gets straight into the lens, it will cause a drop in contrast and destroy your image. My setup did this and it showed a ring in the middle of my view.

Oscar,
All I can say is thank you for your blog and all the time you take to share your knowledge. I have only been flying for a little over a year and I find all your information just awesome. There are few places people can go to get the kind of information you share and nowhere can you find it all in one place, as you have done. I am overjoyed that I finally found your oscarliang.net site, it’s people like you that make this community so great.
Thank you for all your time and effort!!!

Hi Oscar ! As you said multirotor is very addictive , i make also night FPV and love it . So i suggest you to try an 4mm low illumination lens ( it is very very big but awesome) ! When you got a little bit of light its in color
Love your blog !

Will one of those 12V ring-stye IR led rings work properly if you just wired it into the 10V rail on your FC? That way, no extra battery, and you don’t need to worry if the led system is compatible with the voltage you are flying at.

Excellent article! Good to know about the Starlight cam, using IR light. This might be a direction I want to go soon.

Another alternative worth mentioning is the TrueRC.net light systems made by Hugo (Hugeone on RCGroups). He has been doing night flying for a couple years using super powerful LED lights, with elaborate liquid cooling systems, on model planes. And more recently he has released a miniquad LED system, which yeild about 2000 lumens and is very lightweight – I just installed one on my miniquad and will try it tonight. These systems enable use of conventional FPV CCD cameras