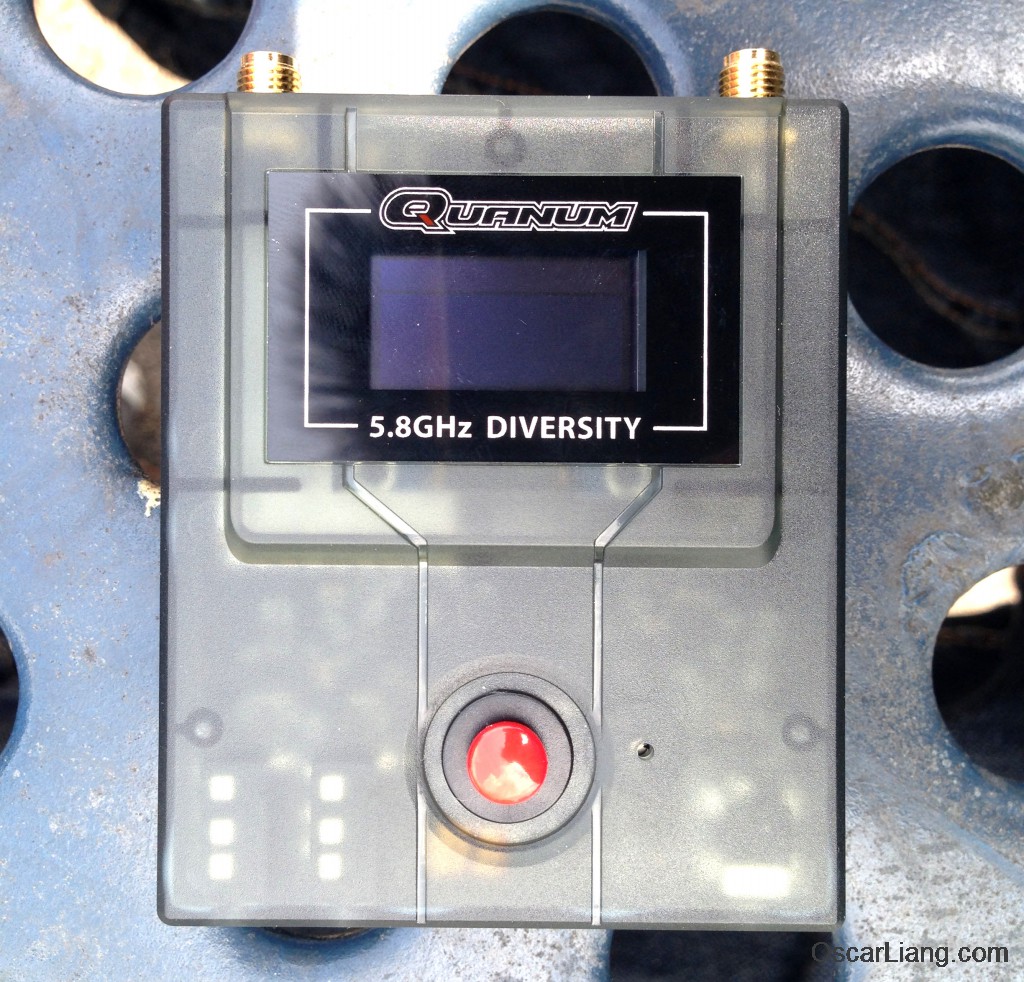 Diversity video receiver is becoming popular for FPV, and Quanum recently released their first diversity receiver for 5.8Ghz which we tested this week.

This is a very simple unit, there is only one single multi-directional button that makes it very easy to use. There are 2 AV outputs and it takes 12V DC input. The antenna connectors are SMA. 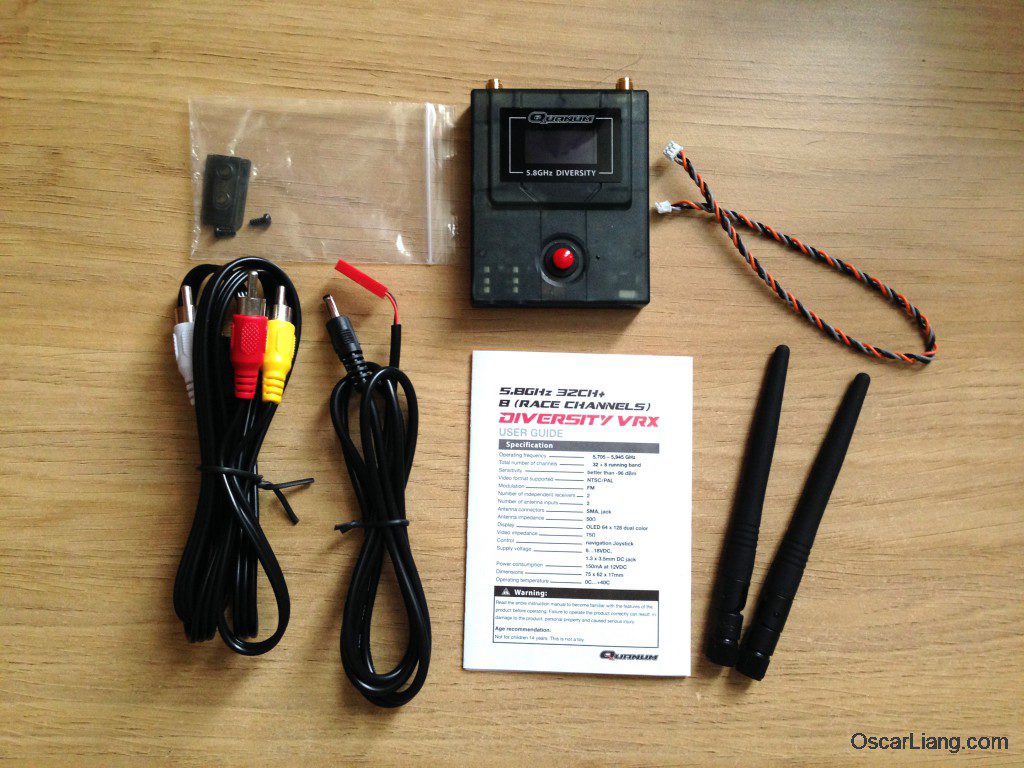 It’s not just a diversity receiver that supports Raceband, it also comes with 2 other great features:

Independent mode – A diversity receiver is basically 2 receivers built together, which means it is possible to tune into 2 different channels at the same time. It’s useful when you want to see 2 different racers on 2 separate screens, or hook up your DVR’s to record their footage, at the same time with only 1 receiver device.

Here are some screenshots of the screen in operation. Notice the purple/blue LEDs on the top, these are indicators showing which antenna/receiver is being used for video output (purple). 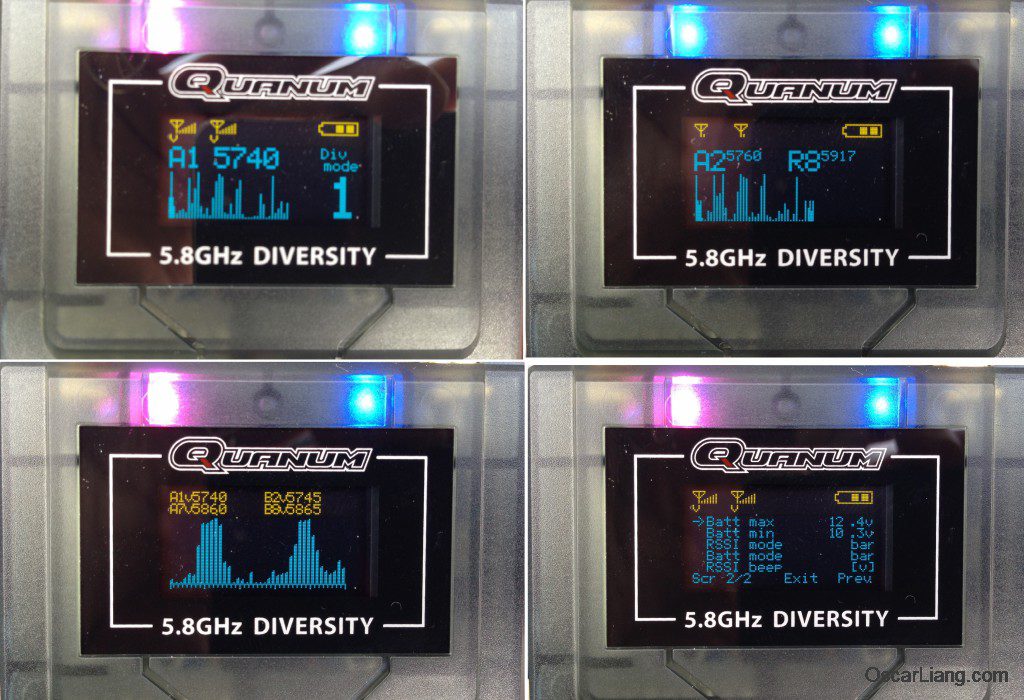 Just a quick test on the diversity receiver on my Fatshark Dominator V2 goggles, comparing the result with the old Fatshark Receiver (which has only 1 antenna).

I only tested the Quanum Diversity unit with 2 cloverleaf antenna’s (that are tuned to different frequency). I should have replaced one of the antenna with some higher gain ones, like a helical or patch antenna to get the most out of it, but didn’t have any with me.

It’s pretty easy to hook up the Quanum diversity receiver with the DomV2 goggles. The goggles allows you to turn off the internal video receiver, and connect to an external one via the AV port. I only use video so I left the 2 audio cable unconnected. 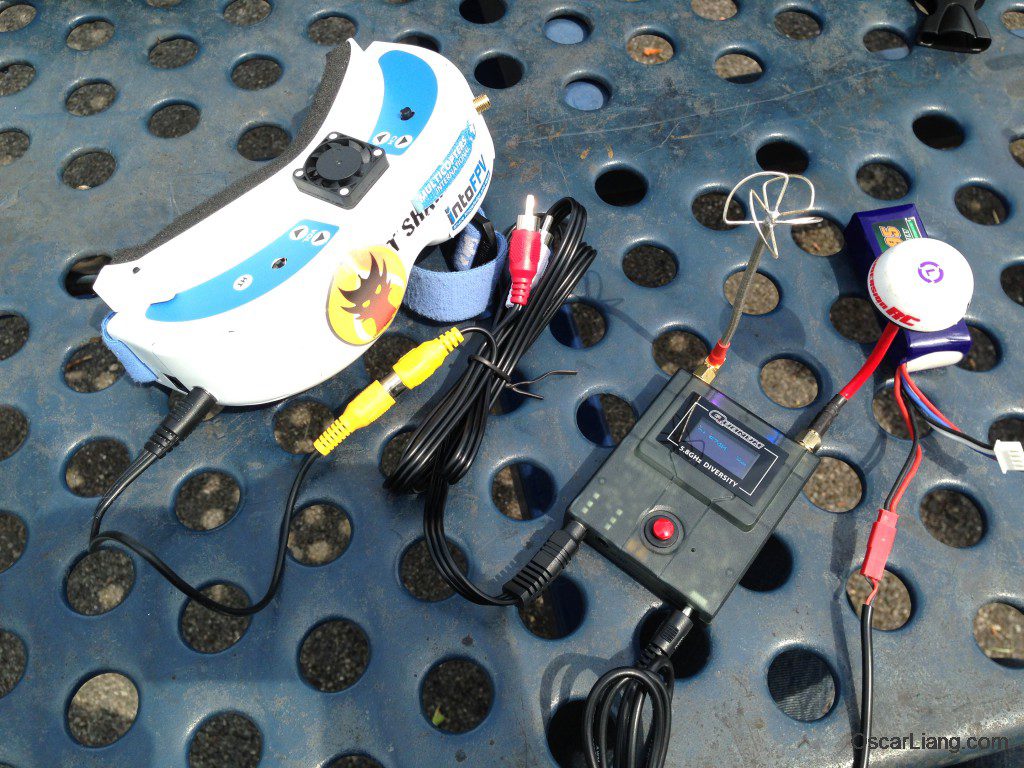 In the test I picked a couple of spots that are behind many trees, with the Fatshark receiver I normally got very weak signal, sometimes even lost signal completely. 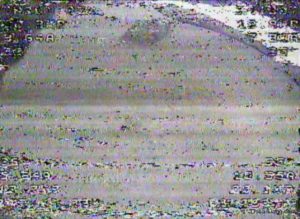 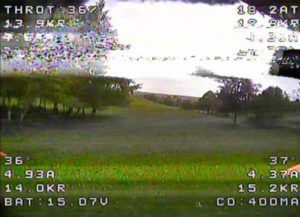 It’s pretty clear that the diversity receiver worked a lot better, when flying at those same spots it still picked up the signal, and the video was still visible and flyable. 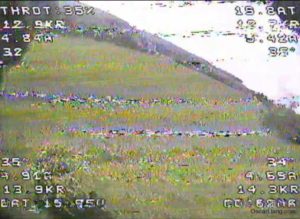 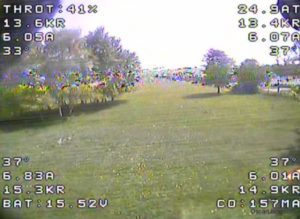 Here is a video of the test.

Here are the manual/instructions for our reference. 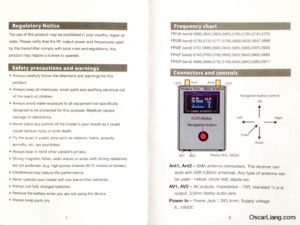 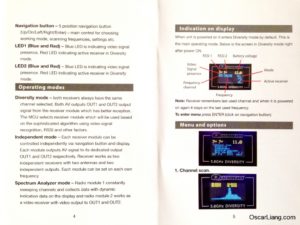 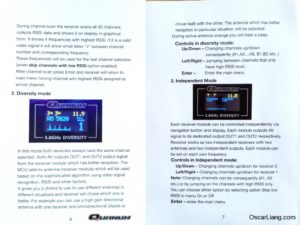 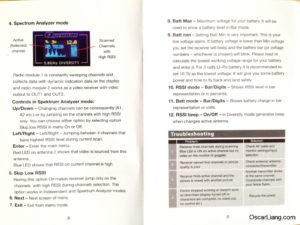 The following instruction allows you to access the service menu option of the Quanum 5.8 Diversity Receiver, to change default settings such as RSSI strength and switching times.

How to enter the service menu

While pressing and holding down the “Enter” button, while powering the receiver ON, the receiver will enter service menu. 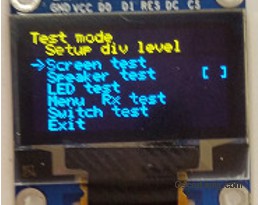 Here we will explain what each option (test) does.

RSSI LED level – level of RSSI when Blue LED will turn ON (with presence of video signal
of course). The number is in RSSI percentage.

DIVERSITY_LVL – difference in the levels of two RSSI’s when the decision of switching will
be made. It is the RSSI hysteresis value. The value is set in RSSI percentage.

The less the number is, the less RSSI difference is required to initiate antenna switching. Setting very low hysteresis value will cause false switching.

DIVERSITY_TIME – approximately 100ms per point, depends on the many factors, max
is 150ms. Reducing this number will cause switching earlier but as a trade-off -premature
switching or erratic switching back and forth in WiFi dense areas.

General rules of settings and recommendations: Timing of switching depends mostly on

Trying different values for these settings to find an effective for your setup. 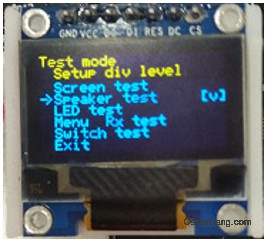 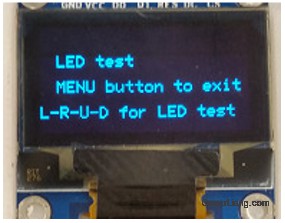 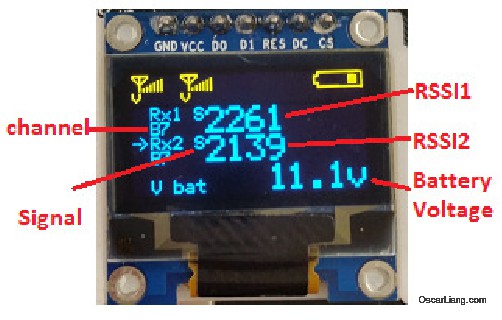 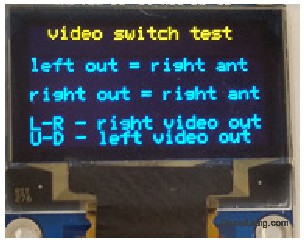 Pressing left and right buttons allows manually assign outputs to any of two antennas in
any combination:

LCD hard to see and getting worst, knew there isn’t any adjustment ( brightless ) . so what can I do ? THX!

Hi,
How can you switch ntsc/pal in the menu?
Thanks!

you can’t select this in the receiver, it’s automatically detected.
you should change this in your camera instead.

Hello… i test half overlord with fatshark hdo and i see lines and video quality very poor. If i test the same with hd3 the video is clear!!! Are quanum and hdo no compatible???? Or the hdo connector is broken??? Im getting crazy ….

An other video “review” with indoor/outdoor test, rc540r is working very well in all conditions

You can change the diversity timer to switch between the 2 antennas, by default it is 10 second, which is way too long

yes you are right, I added how it can be changed in the post

RE: Cloverleafs tuned to different frequency. I assume this is as they’re different brands, given the slight differences its likely the tuning will be different yes?

Also, do you have any special pick for non megabucks antennas? I like the AOMWAYs myself.

The antenna in the picture without any casing is tuned to ch7 on IMRC band, it’s custom made :)
i quite like the spironet, with some fibre tape it’s nearly indestructible so never have to replace them LOL. I haven’t tried the aomway yet