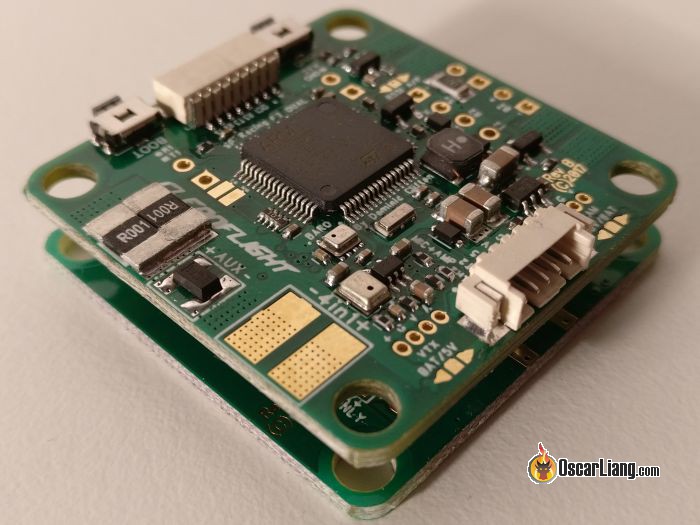 The SP Racing F7 FC Dual Stack is an interesting new product. There are some exciting features that were unheard-of including “PID Audio” and “Dual Gyro Fusion”. The SPRacing F7 DUAL is developed by the man behind Cleanflight, so is he making a come back?

I don’t really have the board, I am only sharing what I’ve discovered so far. This post is not affiliated with SPRacing. I am posting this only because I found it to be an interesting board.

Learn how to choose an FC in this tutorial. 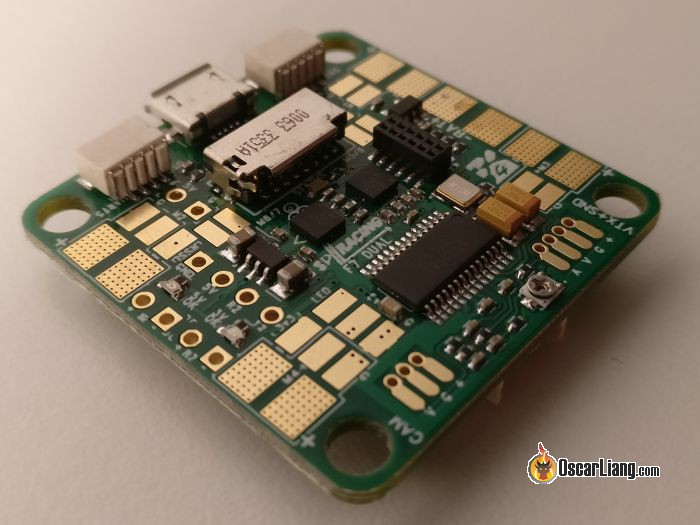 The VTX board is optional which allows you to install other components on, including your VTX, buzzer, receiver etc. You can just solder these parts directly to the pads without any wires.

However due to the fix position of the pads, it looks to only support certain types of VTX and RX:

Despite the limitation, I can see how this board would make a really clean build. 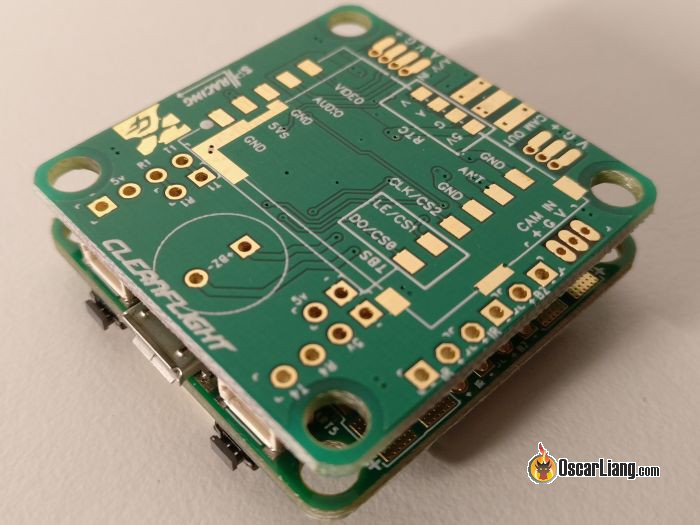 This is no ordinary F7 flight controller!

The SP Racing F7 has two identical Gyro’s, but why? Is it the same as what they did in the Betaflight F7 where you hard mount one gyro and soft mount the other, and pick your preferred gyro to use?

No, I’ve heard the SP Racing F7 will be sampling with both Gyro’s at the same time, and fuse the data together. The two gyro’s are oriented at 90 degree apart and the output is expected to be cleaner than a single gyro.

This is the first flight controller to use two gyros.

I don’t quite understand PID Audio yet, from the product description:

The SP Racing F7 DUAL has CPU generated audio output and a microphone with an on-board audio mixer. You can HEAR the PID controller working AND you can hear your motors via the MIC. Tune your aircraft by LISTENING and be one with your multi-rotor’s performance.

So I assume a good or bad PID tune gives you distinctive sounds? And this feature can help you tune PID better? I am not sure at this point… But it indeed sounds very interesting.

Close Look at the SPRacing F7

The SPRacing F7 flight controller is an AIO board with integrated PDB. For soft mounting, you have enlarged holes for silicone grommets.

The solder pads are big enough for some comfortable soldering. The layout of the board seems to be very convenient. All the frequently used pins including LED, UART’s, 5V and ground are available on the top of the board.

And if that’s not good enough, you can also access some of these pins through the JST headers… How good is that?

ESC power and signal pads are located at the four corners. And it appears to have signal grounds too, but no dedicated ESC Telemetry pin unfortunately. 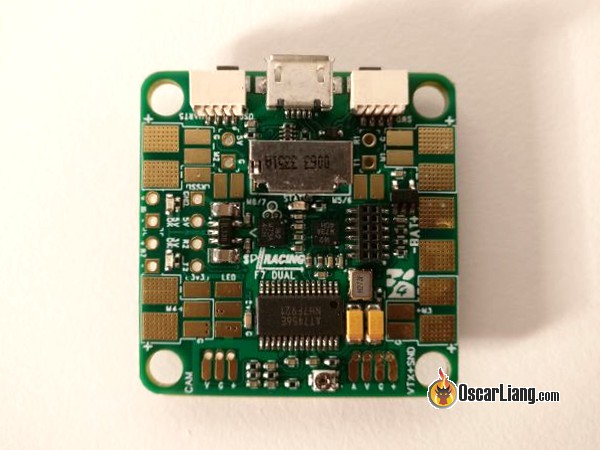 One good thing about F7 is that you won’t have to worry about UART inversion. You will be able to connect SBUS and Smartport directly, and all 5 available UART’s will be fully functional for everything.

It supports IR LED transponder, but seriously, are there people using it at all? I think Mr Cleanflight has been trying to push this technology since 2015. He added this feature in all his boards but I just don’t see it being picked up. 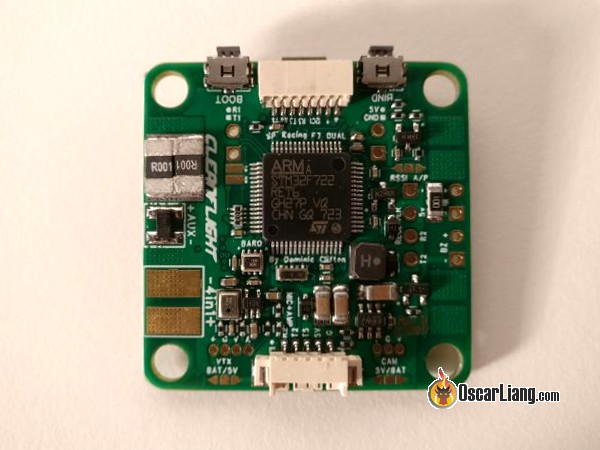 The SPRacing F7 Dual FC will be compatible with Cleanflight,  Betaflight and iNav firmware. Talking about iNav, this board has built-in Barometer as well as i2c pins you can connect GPS module to. Long range FPV, anyone?

We couldn’t recommend F7 FC previously, because the code of Betaflight wasn’t optimized for it. F7 was even running slower than F4, so there wasn’t any point of upgrading.

But Betaflight Devs have been working hard to get F7 up to speed. The developer, Andrey Mironov, recently announced he manage to get an F7 board to run 32K/32K with Dynamic Filter enabled. That’s exciting!

I am very happy to see Dominic (a.k.a Mr Cleanflight) finally release a new FC, and making some noise again in the FPV scene. Without him there wouldn’t be Betaflight, Raceflight or Butterflight… He had been quiet for a long time and everyone thought Cleanflight must be dead. Maybe not… yet :)

For more info about this FC, check out Dominic’s Website.

These boards seems idiotic in every way:
– All-in-one with ICM20602 without soft mounted gyros
– Both gyros will see the same noise. Mounted 90 degrees apart makes no difference, each gyro chip consists of 3 gyros, so no matter which way you turn it 90 degrees, it will just be a different gyro on each board that senses the same movement
– XM+? Why? It’s an RXSR without telemetry.
– No ESC telemetry pin
– Useless bells and whistles announced as the best thing ever.

in practice the gyros do not see the same noise. the mpu6000 has multiple sensors per axis for the same reasons. having them rotated makes the output even cleaner. you can actually see the difference using the dusk gyro debug settings. the final output of 2 gyros is super clean!

XM+ was a a happy coincidence after designing the VTX board. there are almost no receivers with solder pads on the edge or through-hole pins that would fit in the remaining space on the VTX board.

You can use any spare uart pins for ESC telemetry.

“You can use any spare uart pins for ESC telemetry” – true, but I prefer a separate telemetry pad for each ESC. Having to splice together four ESC telem wires and route them to one UART pin defeats the purpose of AIO.

Nowadays JST plugs’ sole raison d’etre is to connect to 4-in-1 ESCs not UARTs. However I think this is less of an issue, since there are enough UARTs broken out on pads already.

Helo, What does it mean: “Update: this feature is already available in Betaflight 3.4 firmware, Target SPRF7DUAL.”?

There is release candidate for BF3.4, which mean you can try it today. Though some features are not yet added, and it’s not stable.

Many thanks, I do not have a clue, new boy to quads, please – what would be very useful is an overview of how it all can be used together

It looks old already though, also not a fan of jst plugs

Yea, i’d much rather solder wires onto a PCB instead of the ultra quick plug and play of a JST……..