How to Adjust Transmitter Channel End Point and Mid Point 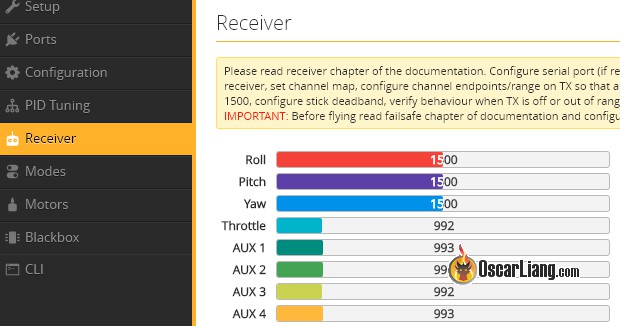 As part of setting up a quadcopter or racing drone, it’s very important to make sure your transmitter sticks match the radio signal received in the flight controller. You quad would fly more accurately and reliably with the correct channel end points and mid points.

In this tutorial I will show you various ways of correcting your radio channels’ mid points and end points. In theory only the Roll, Pitch, Yaw and Throttle channels need adjusting, most of the times you can just leave other AUX channels unless they are way off.

Here is a list of other tutorials we have for the Taranis TX.

The mid points of Roll, Pitch and Yaw channels should be at 1500 when the sticks are idle.

A quadcopter with centred sticks should just stay at the exact angle and move toward the direction you want it to go. But when your mid points are off, the quad would tend to drift and requires constant manual correction. 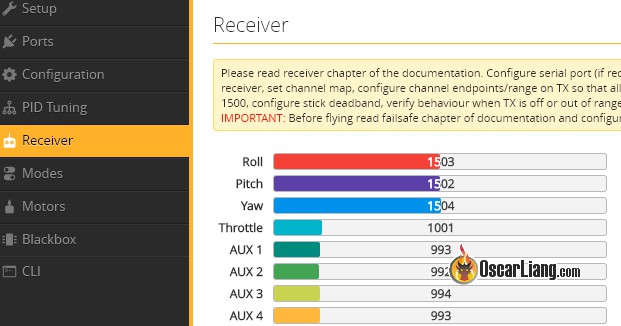 Problems with mid points on Roll, Pitch and Yaw channels

How to adjust channel mid point

You can do it by one of the following methods:

Trimming your sticks using the buttons right next to your sticks is probably the easiest way, that’s totally fine to do. But I found that to be a little less precise than what I am going to show you.

Go to the “OUTPUTS” page on your Taranis (or “SERVOS” if you are using an older version of OpenTX). And you could adjust the “1500” numbers at the end of each channel to change the mid points.

On some equipment there could be RX jitter, i.e. the numbers jump slightly around 1500, e.g. 1498-1502. It’s totally normal but if that happens you still want to get it as close to 1500 as possible, and you could set a “deadband” for that particular channel in Betaflight.

You want to use the full stick range, always. That means your lowest channel value should be lower than 1000, and the highest value should be over 2000. Otherwise your quad might not fly exactly the way you intend to.

For yaw, roll and pitch channels, this means the quad would tend to turn to one side faster than the other, making it harder to control. For throttle, not using the full throttle range means you are not using the maximum power of your quad.

You might even have problem arming your quad if the end points and mid points are way off, which is a built-in safety feature in many flight controller firmware.

Connect your FC to Betaflight configurator, go to the receiver tab, and power on your receiver.

Move your transmitter sticks to the extreme values: i.e. bottom left and top right, and make note of the values you see in the Roll, Pitch, Yaw, and Throttle channels in Betaflight. 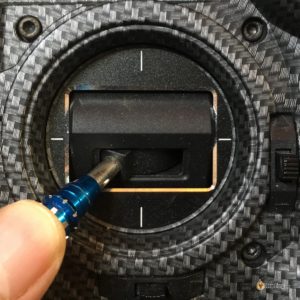 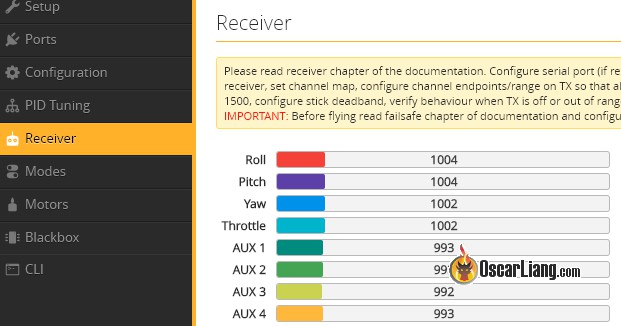 Now move your sticks to the top right for the highest values and write them down. 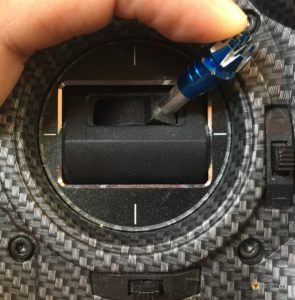 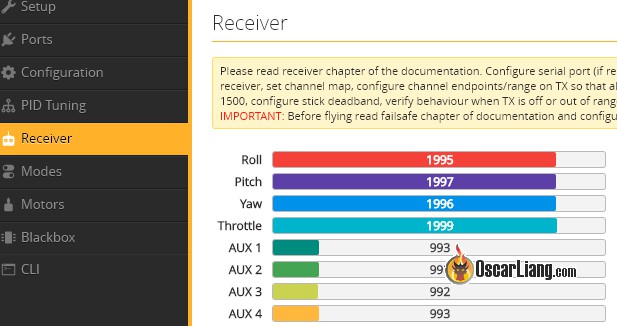 Ideally, you should see 1000 as the low end values for all channels (or slightly lower is acceptable), while the high end values should be 2000 (or slightly higher). If not then you can move on and fix them.

You can adjust your end points using one of the following methods:

In the Taranis, navigate to the OUTPUTS screen (or SERVOS if you are using an older version of OpenTX).

Adjust the MIN parameter until the channel value reads 1000. Do this for all four channels: pitch, roll, yaw, and throttle. 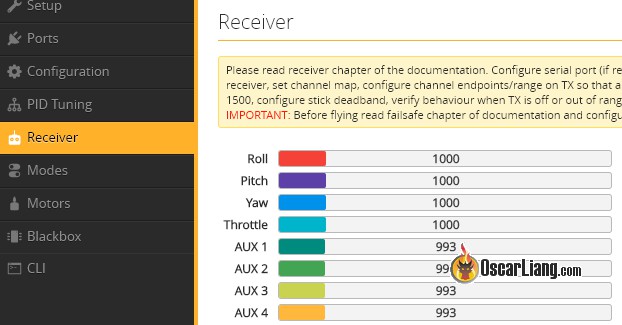 Next, hold the transmitter stick up/right and adjust the MAX parameter to set the channel value to 2000. 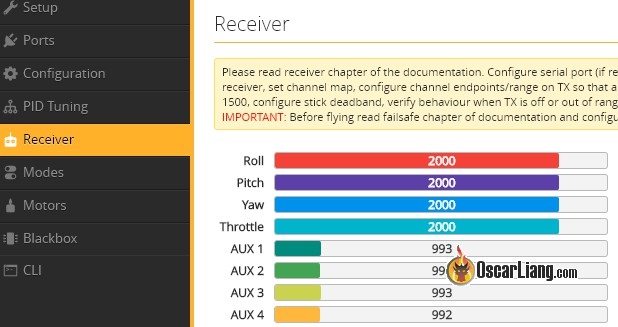 By default, the Taranis won’t allow you to set endpoints greater than 100. If you can’t get your endpoints to 1000 and 2000 without going over 100%, you can enable “EXTENDED LIMITS” in the MODEL SETUP screen. But this is usually the last resort and avoid doing it if possible.

For those who cannot adjust their endpoints in the radio, or don’t want to do it on the radio, you can also do it in Betaflight using the “RXRange” command.

Enter “dump” in CLI, and look for “rxrange“, you should find 4 lines, and they represent the first 4 channels in the radio, e.g. Roll, Pitch, Yaw and Throttle. (You should verify if that’s the correct order in your setup)

You can now do the same to the other 3 channels according to the existing end points we recorded:

Now all 4 channels should give you 1000 to 2000 end points respectively. If there is still a tiny bit of difference, you can fine tune it using the first method we covered here (Outputs Sub trim).

If your taranis has consistently wrong end points and mid point, you should definitely try to calibrate the sticks first and repeat the steps in this tutorial. And ask for more advice in our forum.

Hi Oscar, as usual, a great guide, you can be proud of your articles, never dissapoint!

Your articles are always spot on, thank you so much for sharing your great wealth of knowledge!!!

Man thanks so much for the rxdump info. I couldnt set more than 100% outout on my Radiomaster Tx16S that did it for me.

i just got the radiomaster tx16s and i followed the steps above changing the end points on my radio only got me to 1075 and 1947 and when i tried to set rxrange in betaflight there was no change in the endpoints in the receivers tab any other ideas? or has anyone else had this problem?

After adjust the endpoints using rxrange my midpoint has moved as well. So now my endpoints are all correct but my midpoint is out. I’ve left all of the outputs values on my TX at default (-100, 100, 1500). How do I fix this?
Thanks for your help!

when my sticks are centered betaflight always shows something between 1480 and 1510 on roll channel, what can i do to keep it stable at 1500

Some receivers do that, the outputs jitter like this. Not much you can do, you just have to apply some deadband on roll/pitch so it doesn’t affect your flying as much.

strange problem here. tyro69 fpv video is upside down in my goggles. is there a way to fix this?

Extended limits in model setup. Perfect.
I’m new to taranis and I fly a helicopter with brain2 FBL and my cyclic sticks are giving about 86% travel at max endpoints in outputs page. 86% is a bit short really.
I’ll enable extended limits. Thanks. Your site is a great resource.

How can I do this on a Nirvana / Dark Knight radio?

Hello,
how can I ad more “travel” for finer throttle feel and easier indoor hoovering?

Same issue here moving from DX6e to Radiomaster zorro. Not getting near 100% travel on all 4 primary channels. I’m stuck.

Found a JB video about the Betaflight cli function “rxrange” for the four primary output channels. (E.g. rxrange 0 988 2100) which makes the channels work for the whole range.