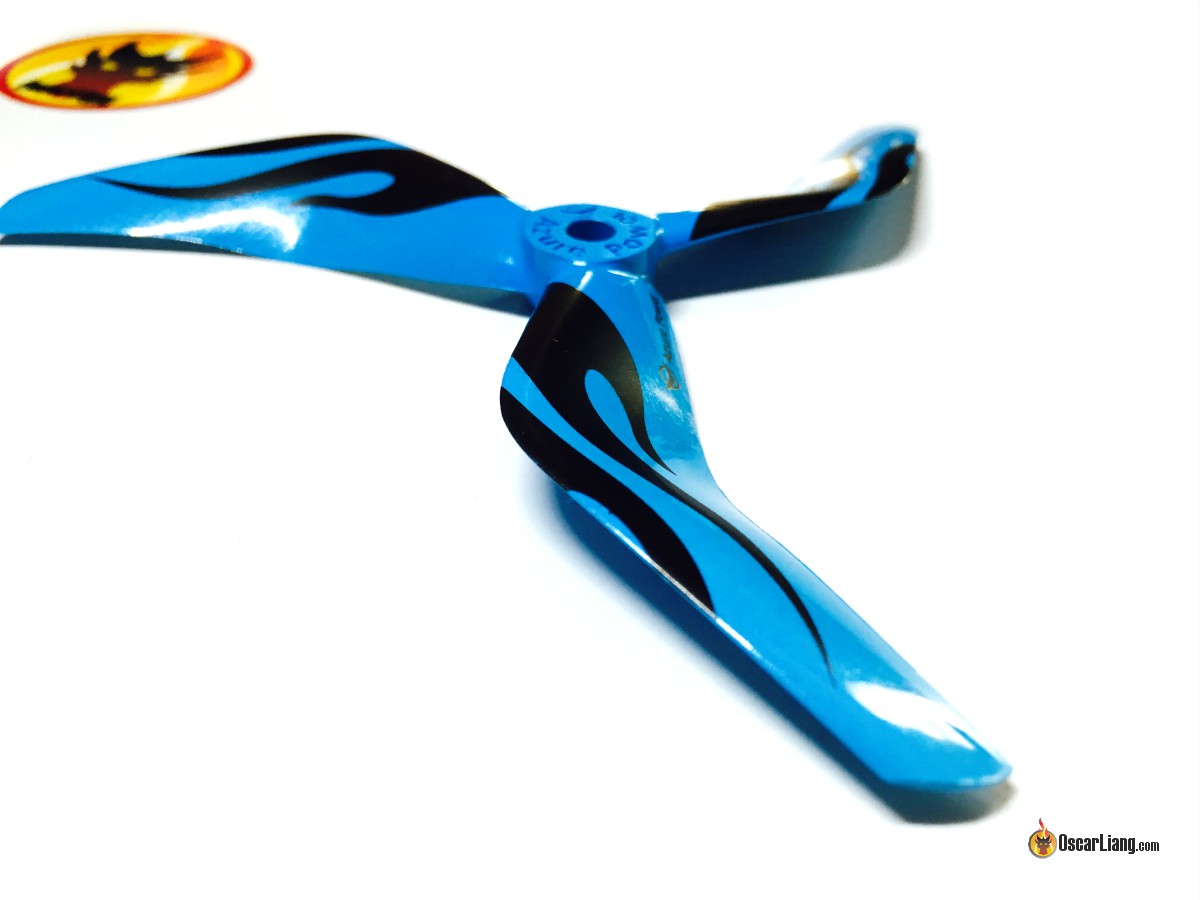 Azure Power sent me some new crazy-looking 5″ mini quad propellers to test. These props are designed for racing and freestyle flying.

The Azure Power V2 props really stand out with one of the most unique shape and colour I have seen in props so far. They did not disappoint in terms of performance either and seems to be well engineered. Learn about the basics of propellers. 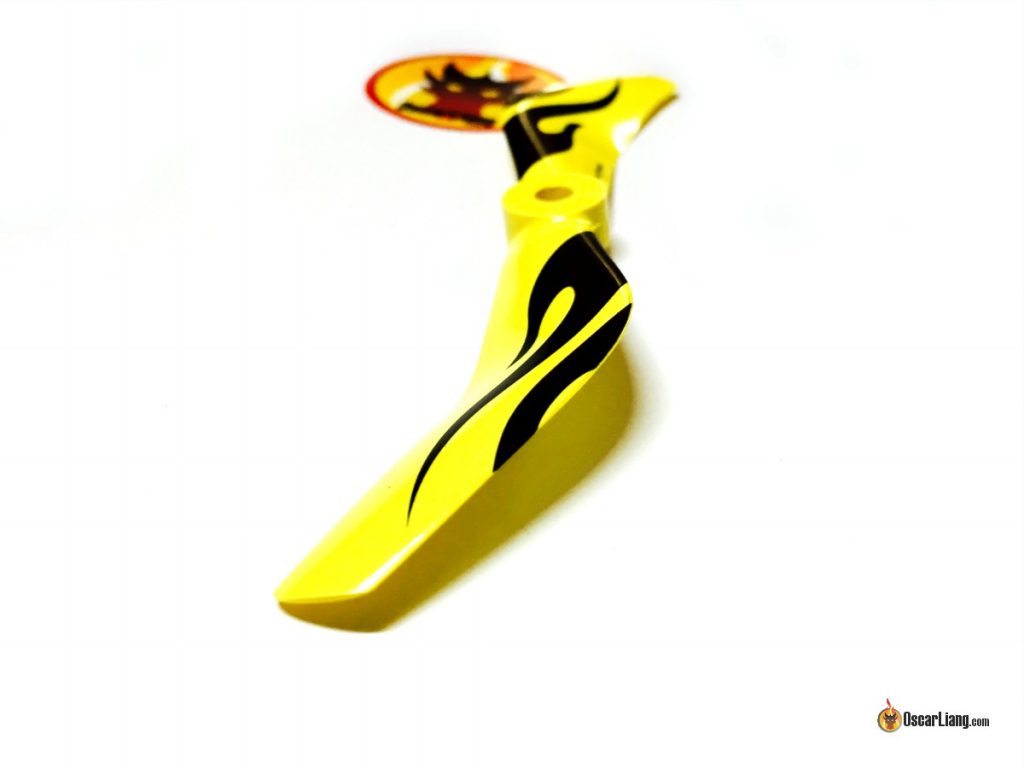 In this review I will test the Azure Power V2 (AP) props against DAL Cyclone 5045×3 which I have been using for a while. I tested these props on 2 different mini quads, one running T1 2600KV motors, while the other running Edge 2300KV so I could get a more complete picture how they perform with different KV motors. 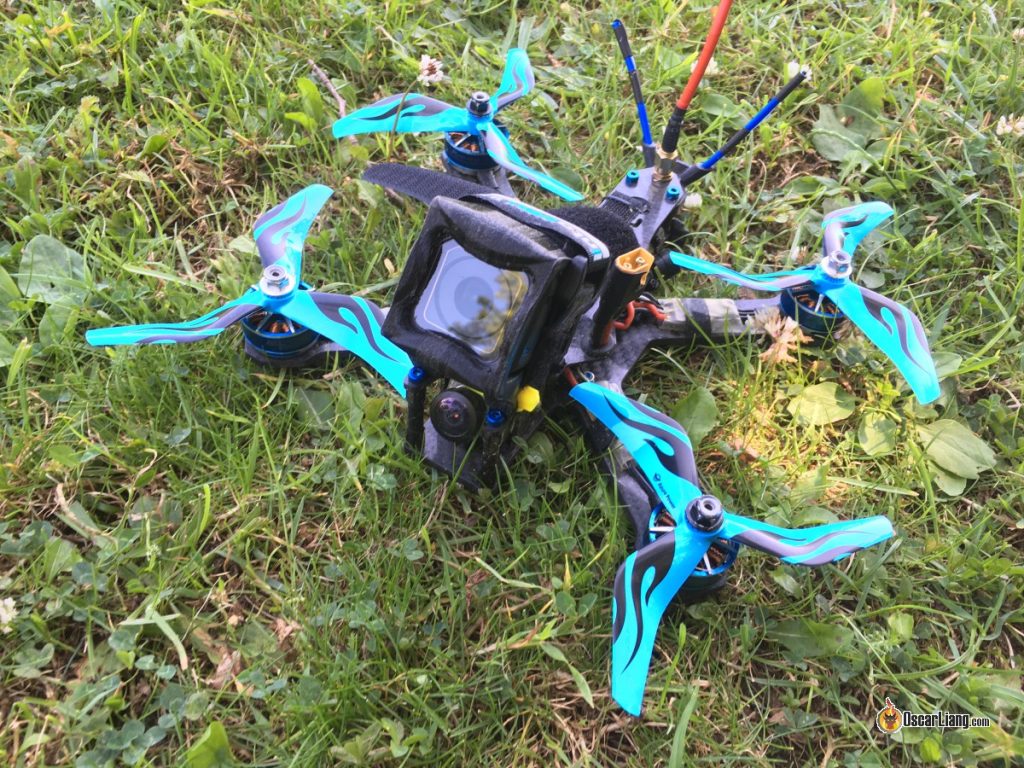 These props are made of two different types of materials: PPA carbon fibre, and Polycarbonate (PC). The PPA carbon fibre is noticeably stiffer than PC, harder to bend, and more brittle. 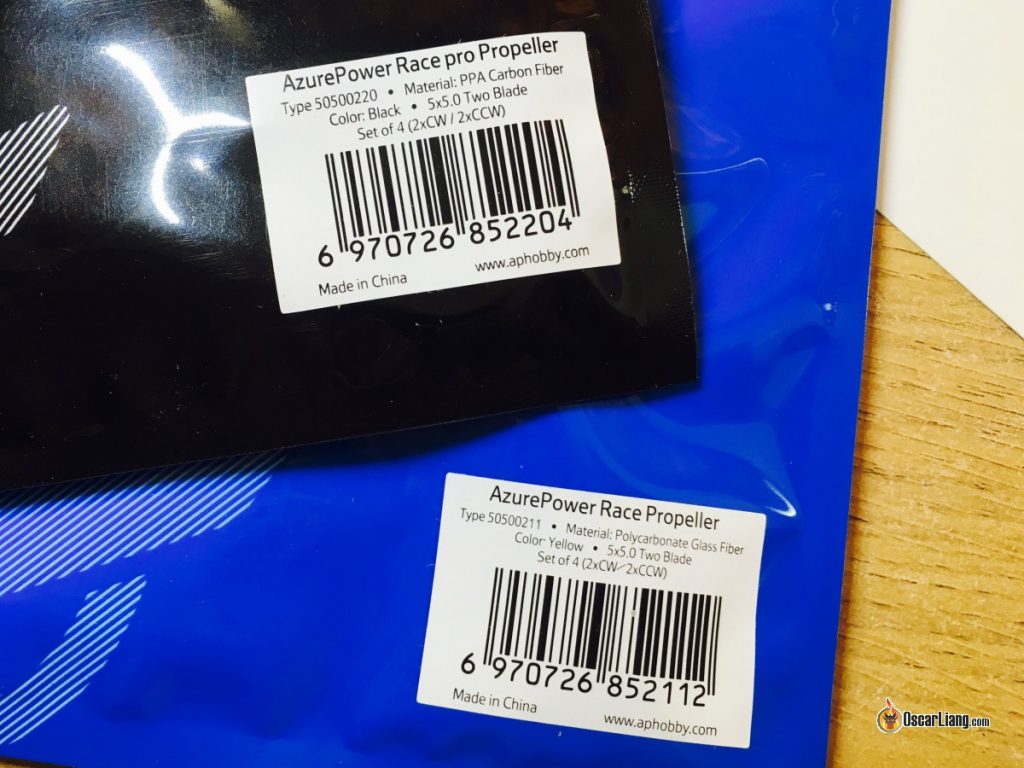 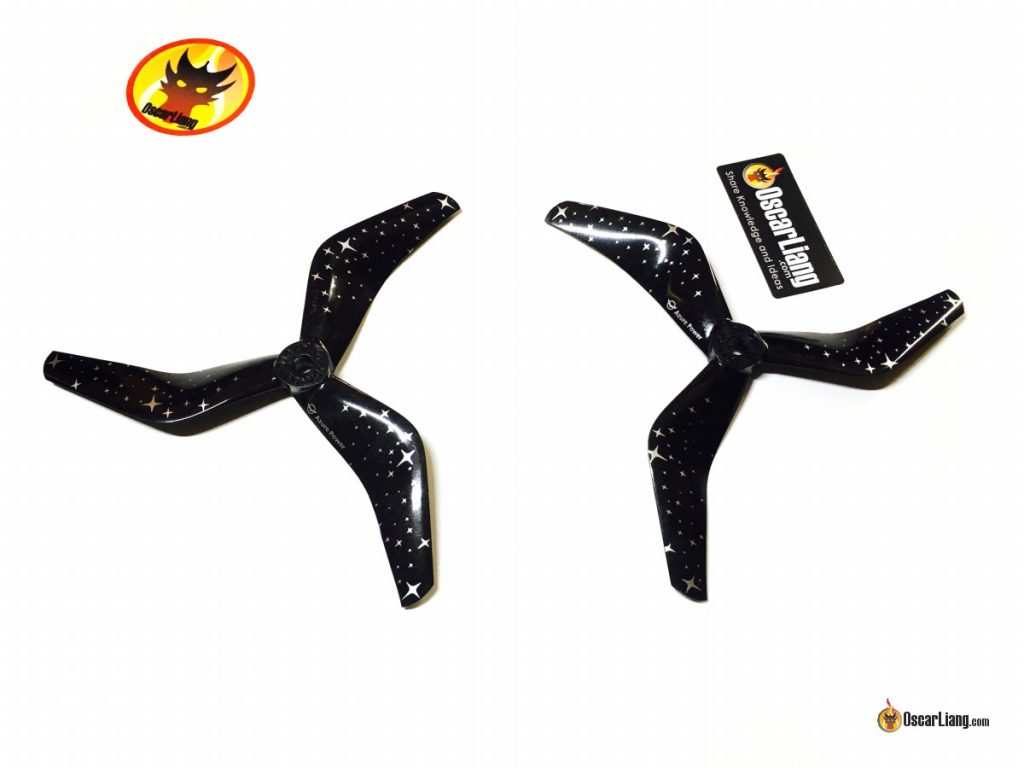 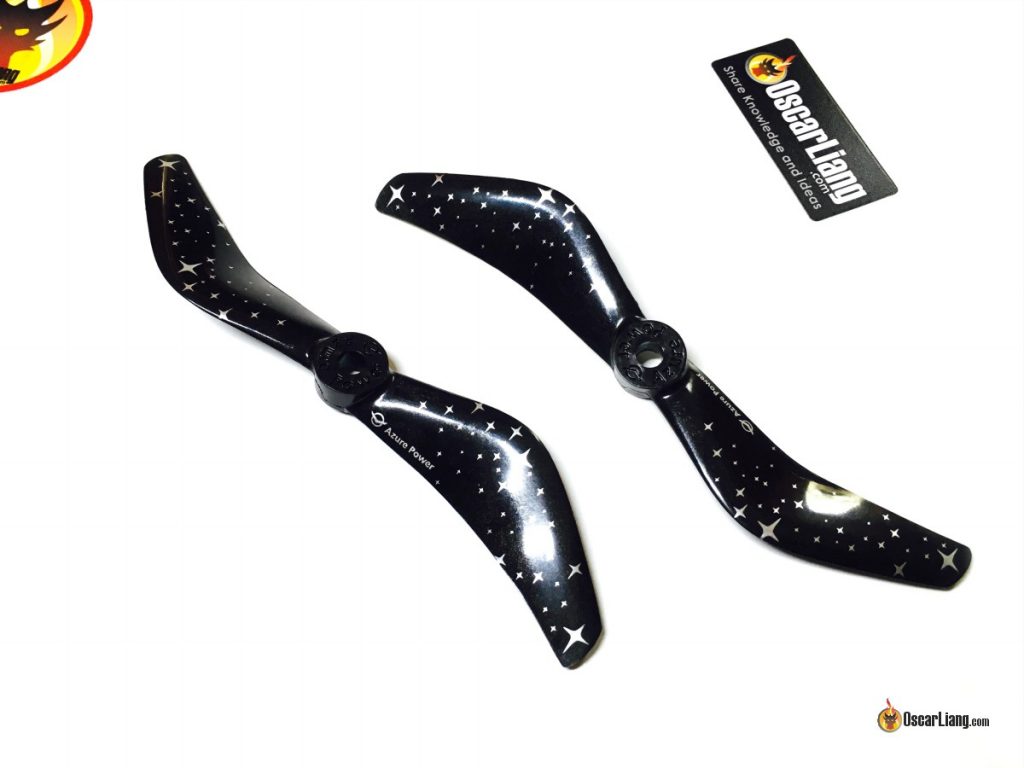 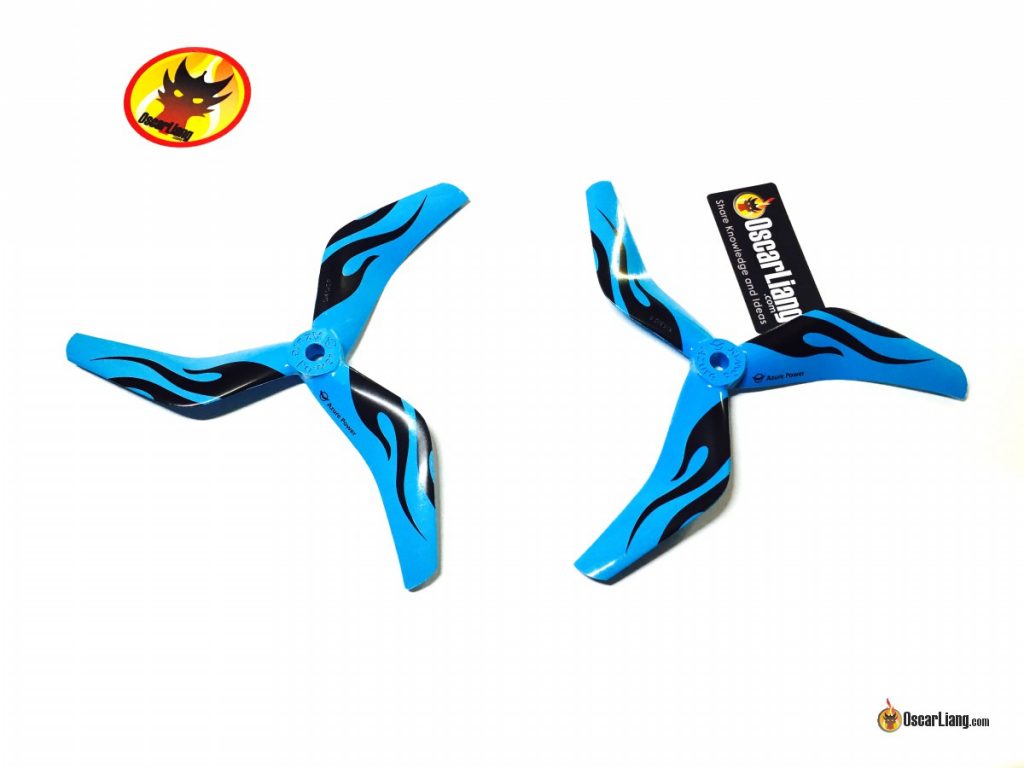 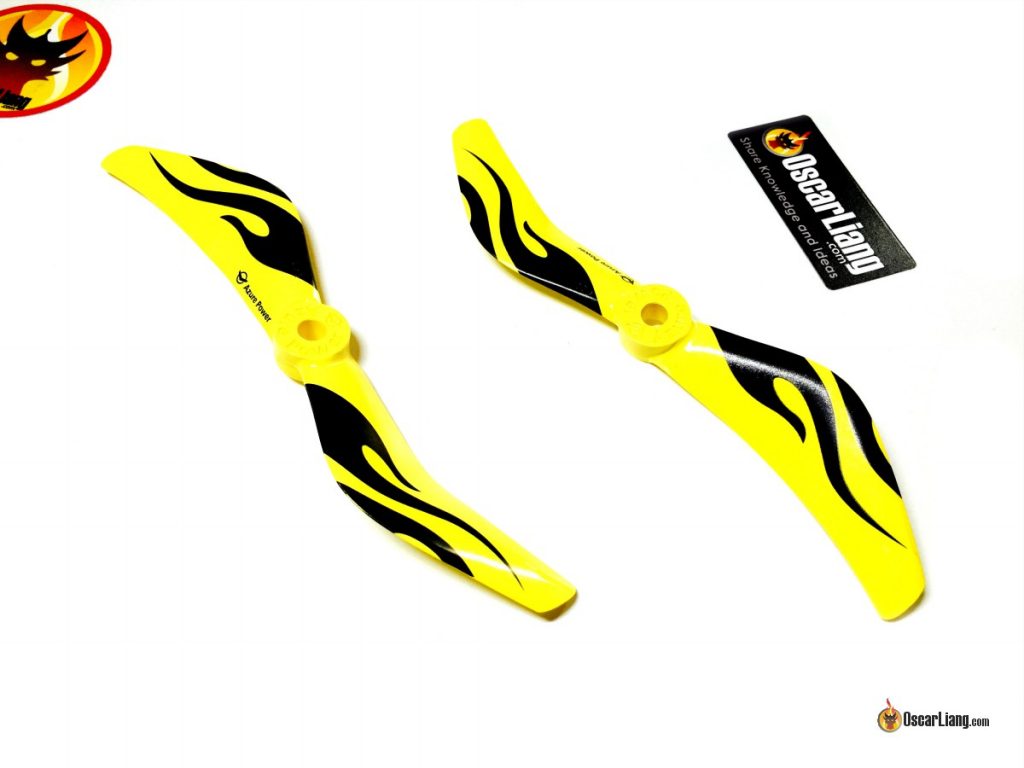 After a couple flights with each of these props…

Because it’s so amp demanding on the throttle top end, it’s hard to maintain max RPM and loses efficiency quickly, therefore it has a slower top speed than the DAL. 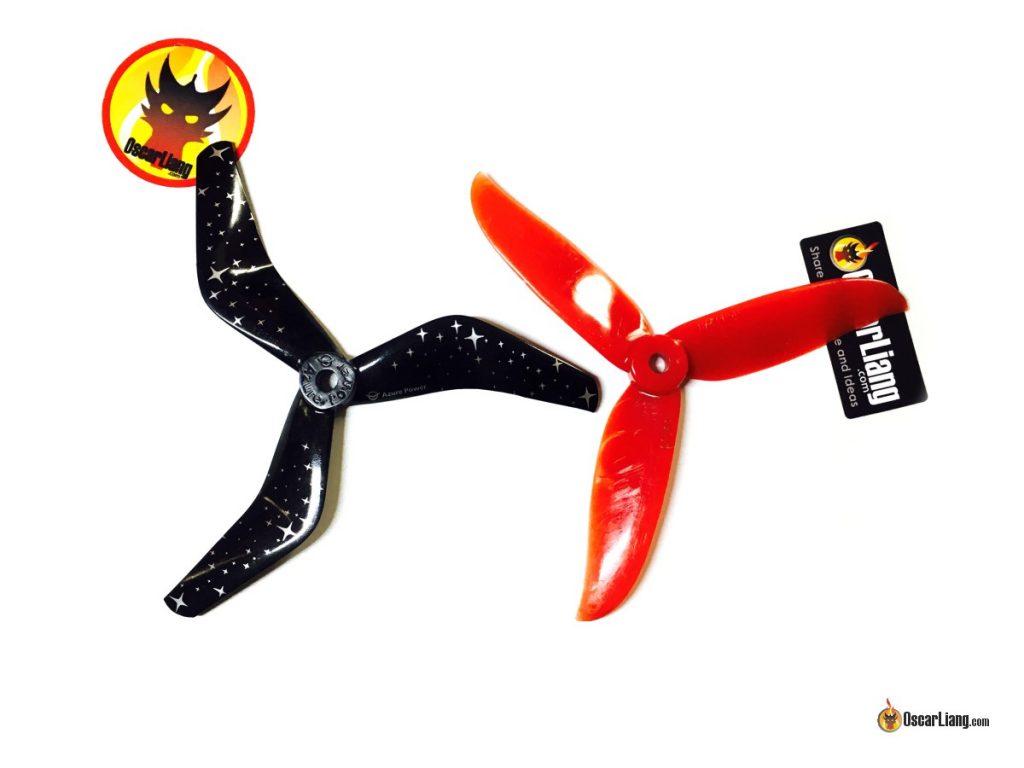 I really like how the AP 5045×3 handles cornering, they have so much grip they handle sharp turns like a champ. With the DAL 5045×3, the quad normally tends to curve/drift a little bit when turning in that situation. The 5050 perform similarly at cornering to the DAL (as expected as they have 1 fewer blade).

Low/Mid throttle response is precise and soft with the AP props in general, I was able to fly lower in altitude at high speed with these props than I could with the DAL, which normally tend to “jump” with just a tiny bit of throttle change at the low throttle range.

The Poly-carbonate versions are just as tough as any other modern PC props. However they do bend very easily, more easily than the DAL actually so I was constantly getting oscillations after a crash or hitting a branch. The PPA Carbon Fibre ones are less likely to bend but more likely to break as they are more brittle.

I see more bounces and prop wash with the triblades than the DAL, while the two-blades are smoother and similar to the DAL in that respect. I think that’s probably to do with the design of the blade, which carries a larger momentum further down on the blade, and that affects the rate of RPM change.

All props are very well balanced, no jello or oscillation in my Gopro footage.

The AP props run quiet, and the sounds are much deeper than the DAL or other triblades props I have tried. That’s probably due to how stiff these AP props are. 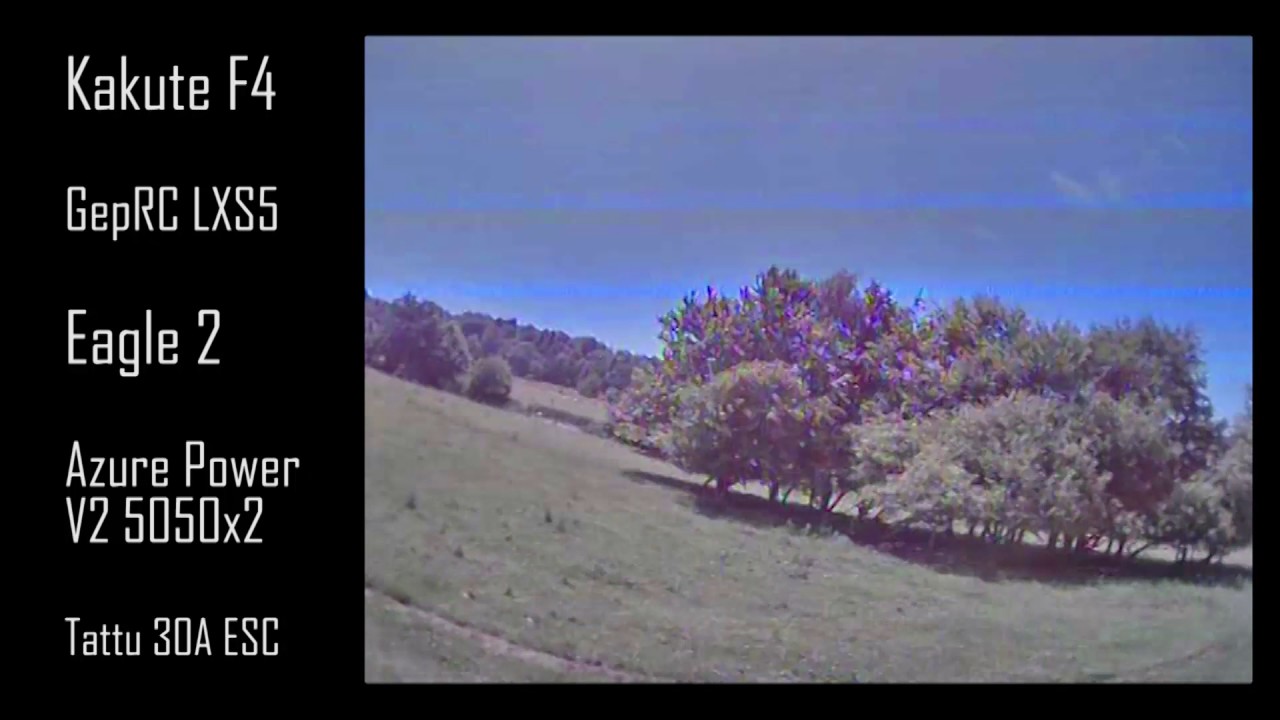 What I would use them for

The triblades are great for precision flying, where you use a lot more low/mid throttle than the top end, such as in courses with challenging obstacles perhaps. For everyday flying I prefer the 5050 two blades, and I think they are good for both racing and freestyle.

Hello. My name is Ken. I have a mini quad 350 with 6in Azure tri-blade props. My flight controller is the pixhawk mini. My firmware / ground station is Mission Planner. Brand new ECO 2400kv motors. I’m not yet into high speed racing acrobat type of flying. I’m more into low to medium speed & getting some good aerial video. I’m experiencing some tremendous amount of wobble. I’m not saying vibration in the video. I’m saying the whole unit wobbles. When I arm the motors & they spin up it’s stable. But once I increase the throttle even before takeoff it starts to wobble. During the entire duration of the flight it wobbles. It does seem to settle a bit when moving around. The wobble is more pronounced when hovering. I don’t think I have any loose screws or anyting everything seems to be nice and tight. Do these props need to be balanced or am I using the wrong props for my setup and my style of flying? Can you please help in any way thank you?