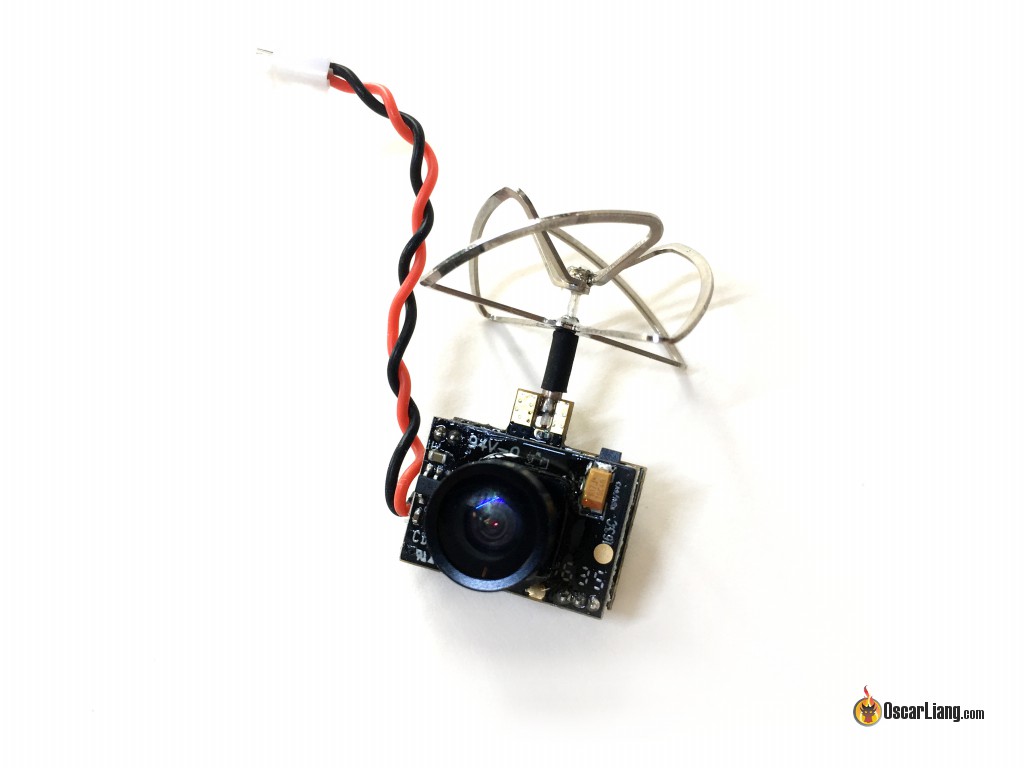 I wanted to review this Eachine TX01 VTX/Camera combination, because it can potentially be used on brushed micro quads such as the Tiny Whoop, and only half the price as a FX797/FX798.

Get your Eachine TX01 25mW VTX Camera from Banggood.com.

In order to understand some of the specifications, please learn about the basics of 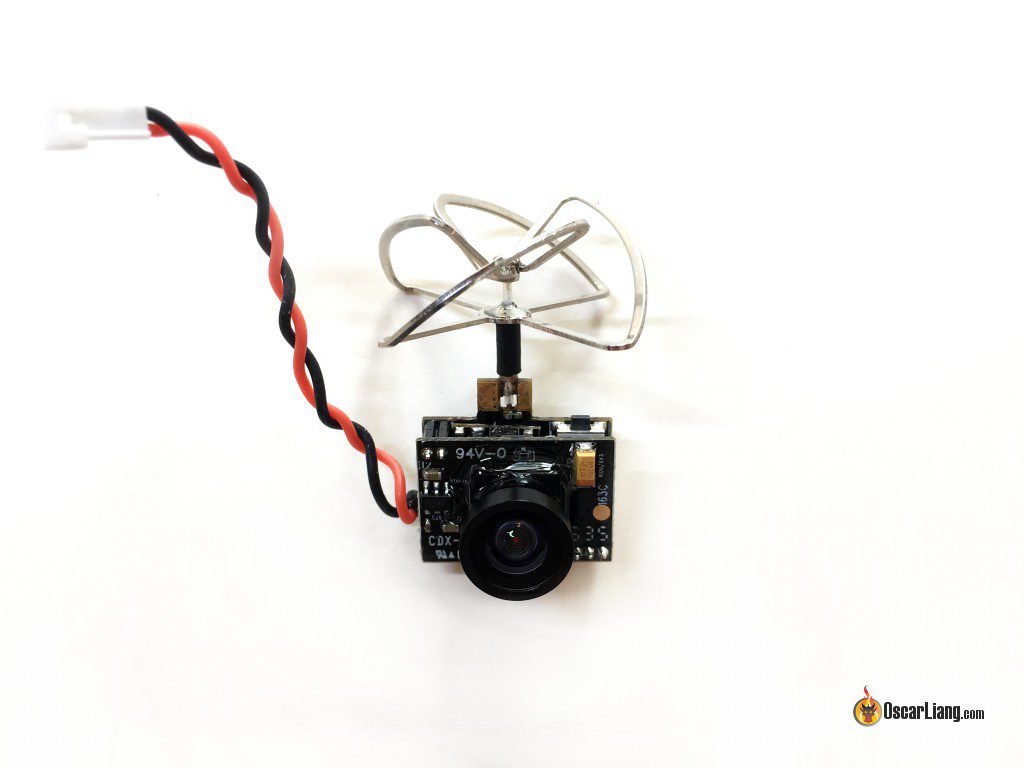 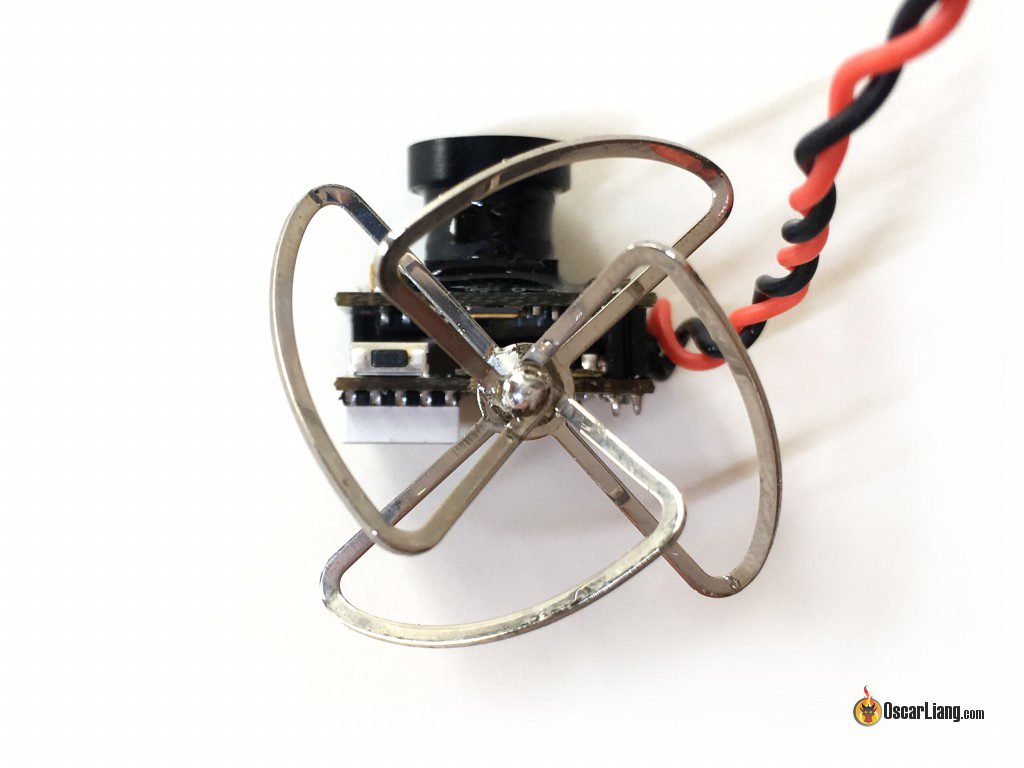 It comes with a skew-planar (4-lobe) antenna, equipped with an 1-digit blue LED Display. It has good power filtering and works great even when powering directly from main 1S LiPo battery.

The power cables in the unit I received actually go out from the side, not from the bottom like it’s shown on the product page. The power connector is a Pico blade (same one used by the Inductrix Blade).

In the package it comes with the camera/VTX unit, a manual and a connector converter (2 pin Pico blade male to LOSI female – see connector diagrams) 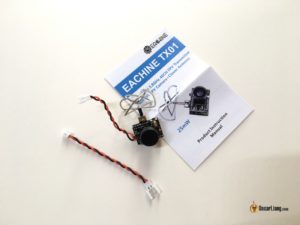 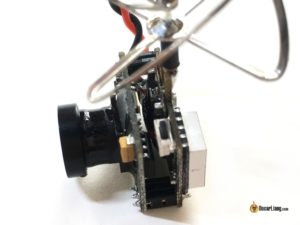 So first of all, the TX01 is slightly smaller in nearly all dimensions. That means the VTX mounts for the FX797 might need a bit of redesign (in fact it fits, but it doesn’t sit snugly and wobbles a bit, I had to hold it in place with rubber bands). See here for the difference of FX797 and FX798. 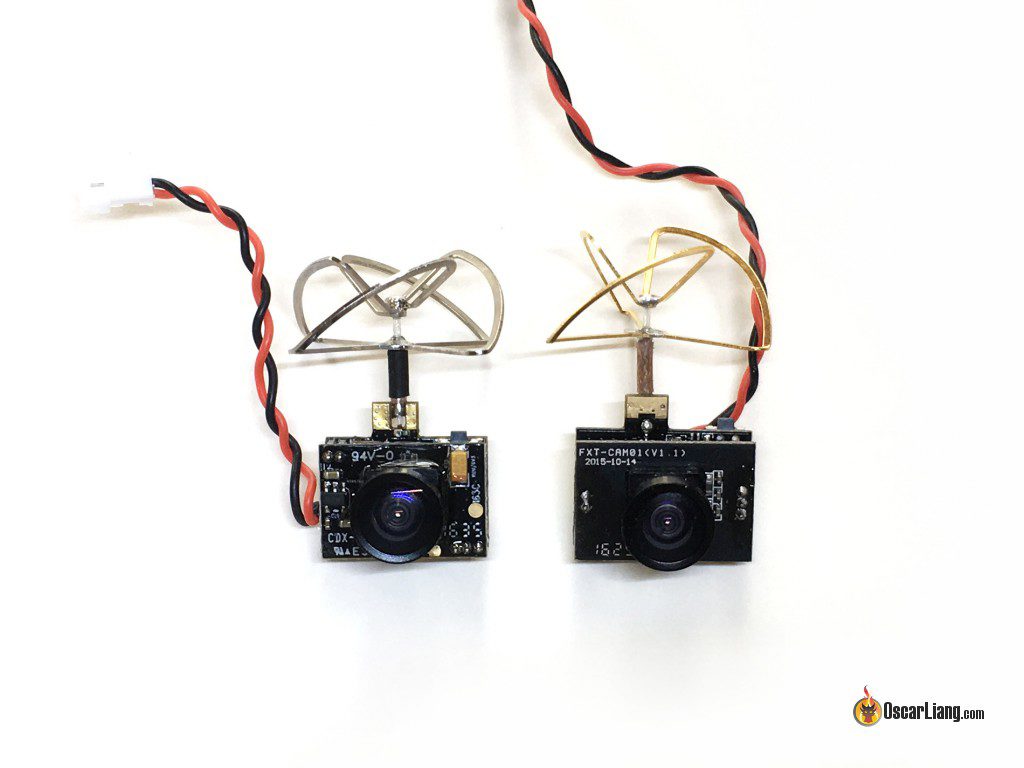 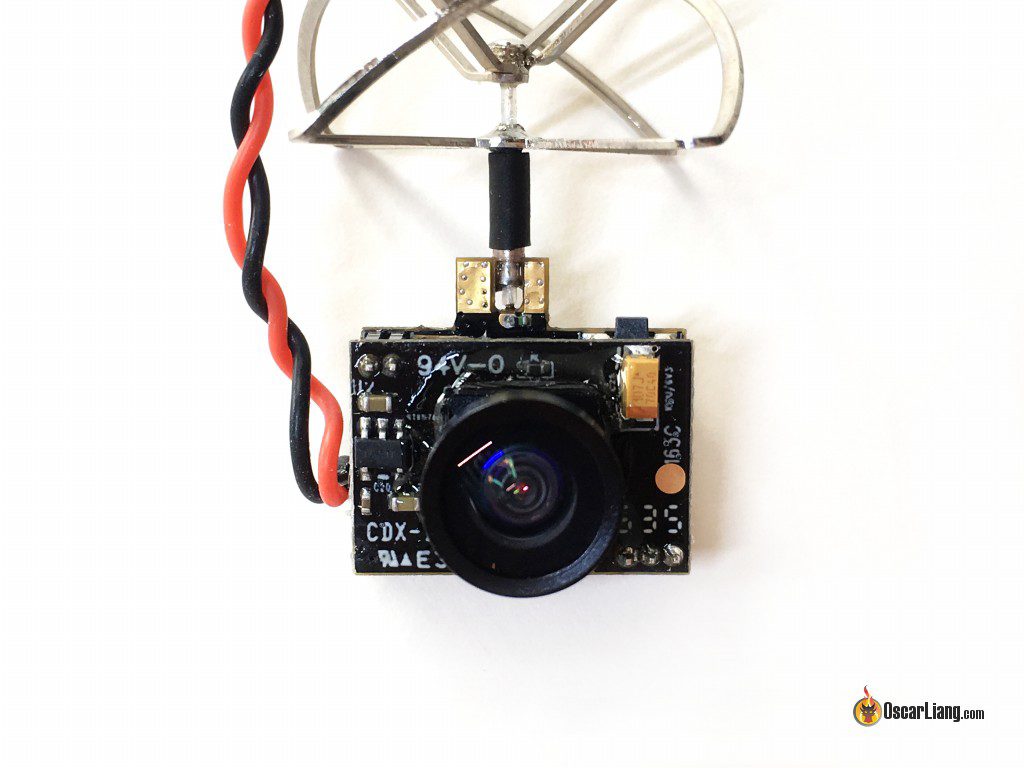 As you can see, the TX01 has stronger antenna with Nickel-plated metal. They have 4 lobes instead of 3 which means extra weight? Not that much, but still, it is :)

However, in my testing I found they have slightly better range than the cloverleaf FX797, so the 4-leaf design could be an advantage (roughly tested flying around the house will update with numbers later).

Personally I would replace the circular polarized antenna with a whip antenna for better durability, lower profile and weight saving. 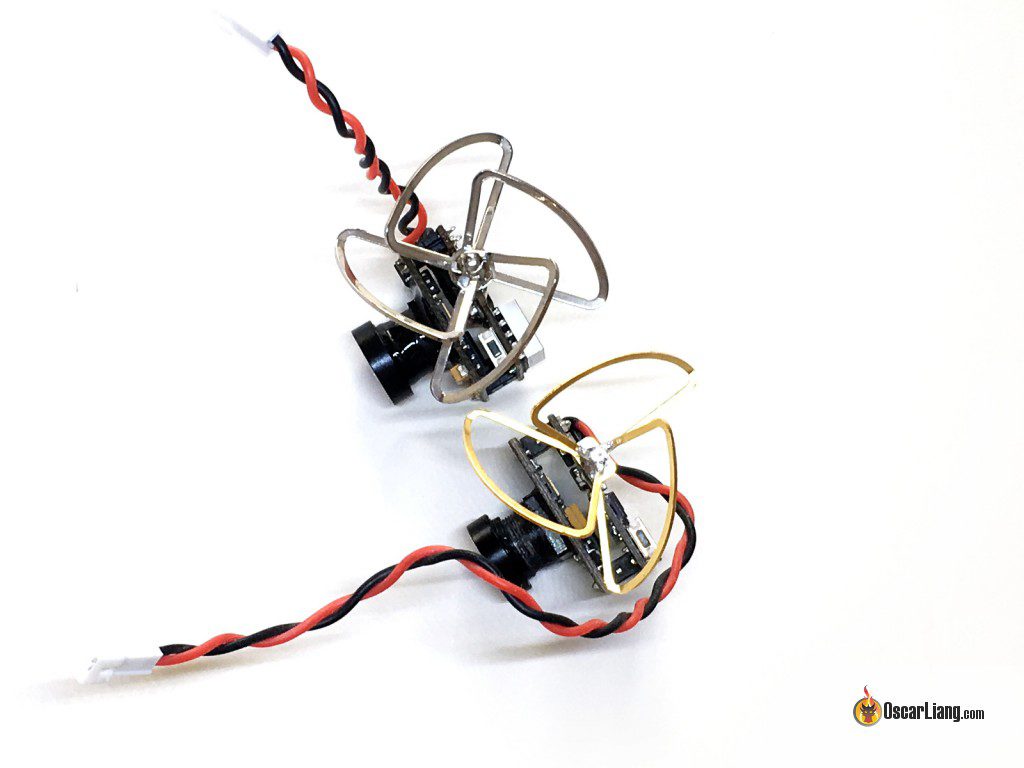 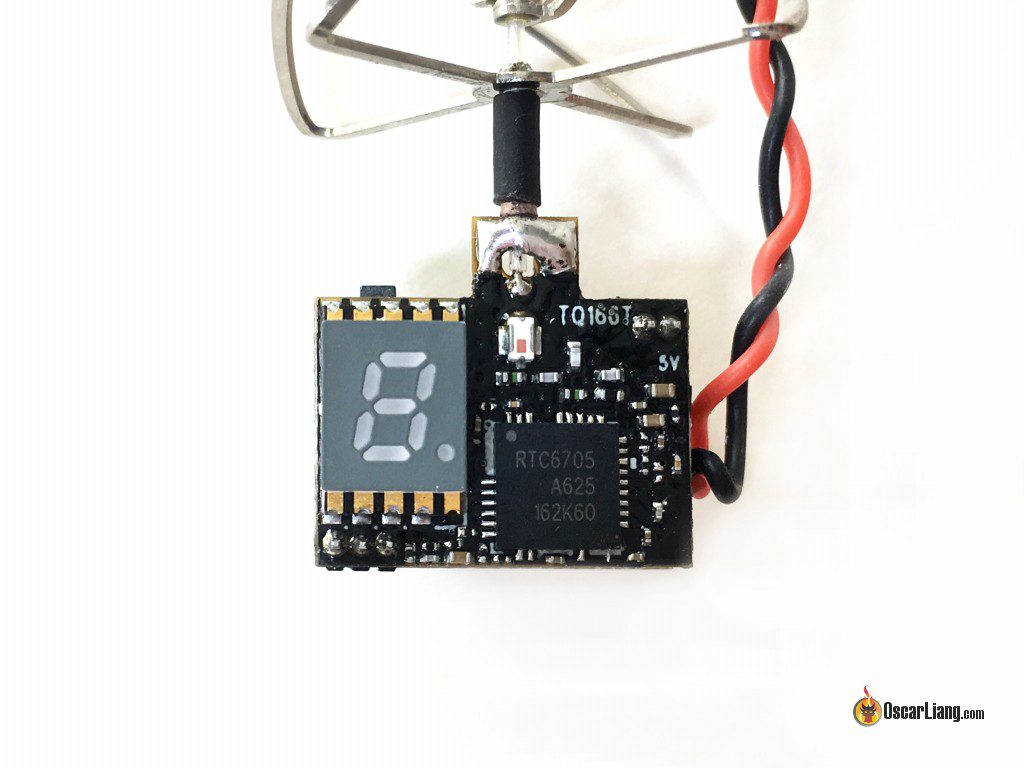 Another great feature of the Eachine TX01 is the much better power cable protection. The wires are protected by a thick layer of glue, and you won’t have to worry about getting them pulled off. However they are soldered inside the unit, fixing them would be extremely difficult. 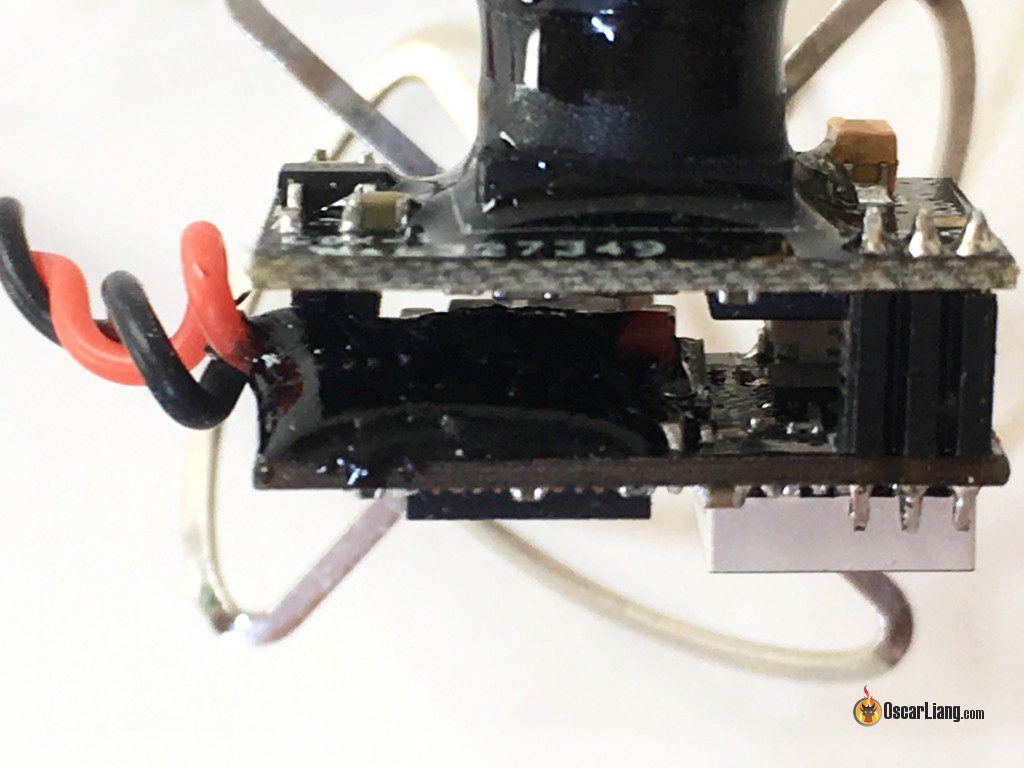 The AIO camera also gets hot just about the same as the FX797.

I was flying 2 Tiny Whoops and comparing the DVR footage, on the left is the FX797, on the right is the TX01. 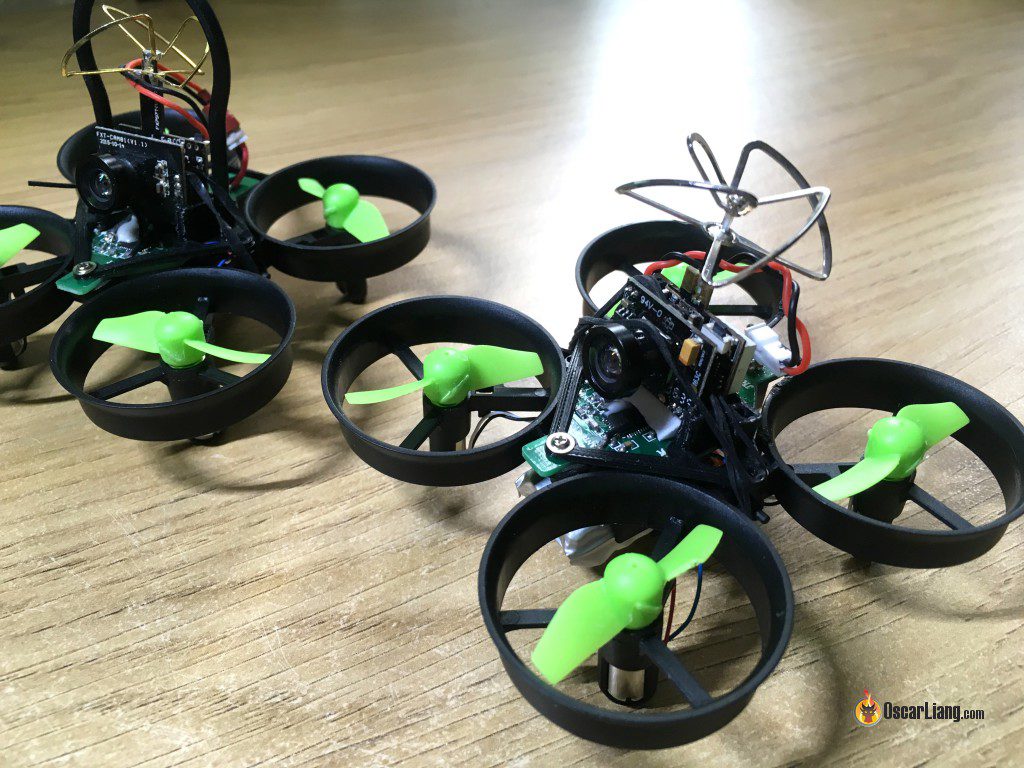 During the test I didn’t notice any noise in the footage, so power filtering must be working great.

Image quality are surprisingly similar. FOV are about the same too. I wouldn’t be able to tell which I am flying in a blind test. If I have to be extremely picky, I would say the FX797 has just a little bit better WDR than the TX01, and less contrast, but it’s hard to tell. 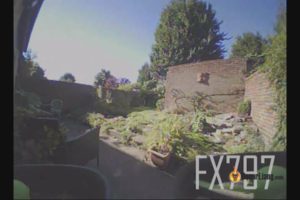 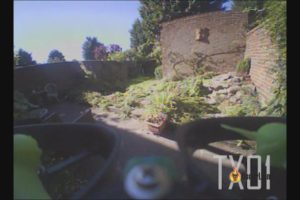 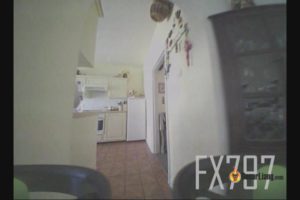 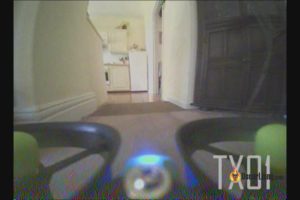 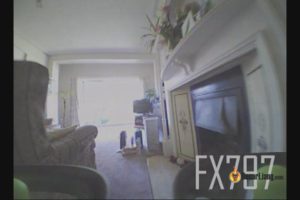 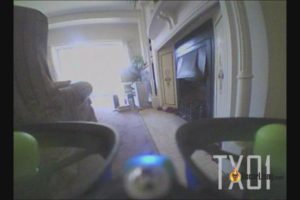 TX01 has a big brother, TX02. The main difference of TX02 being the higher transmission power of 200mW instead of 25mW. In theory, 200mW should give you more than twice the range compared to the 25mW. Given that they are priced the same, you might wonder why not just pick the one with higher power, right? Think again.

Nevertheless, 25mW is enough for me to fly around the house, and gives me around 250m of LOS range. 200mW is just a bit overkill for quads like the tiny whoop :)

But if you are using it for longer range on bigger aircraft this would be the one to go to.

Do I Recommend It?

Hell yes, I really like this VTX/Cam :) It’s cheaper and gives better range. If you don’t mind the smaller size and slightly heavier weight (0.5g).

I only hope they can make a new version in the future, removing the LED display, and use Whip antenna. That would drop the weight down to 3.5g at least for sure :)

I have a problem and i couldnt find any solutions on the net so maybe you can help. I am using my tx01 with furibee f36 and it was ok. Then suddenly (without crash or so) video started to diseppear when i give throttle. Video is perfect when quad is on but no throttle but even few amount of throttle makes noise and interference. What can be the problem?

first of all, check your connection, soldering etc…
secondly, maybe your motors are getting old and need replacing.

Oscar, I have a TX-01 that I want to pair with a AIOF3_brushed flight controller which has build in OSD, any idea how I wire the two? Filtered 5V and ground is easy, board also has VIN and VOUT but just need to know on the TX01 where to attach these. Any help would be appreciated, would love to have OSD with artificial horizon and all the other perks in a micro quad.

to pair the 2 you would need to take the TX01 apart, connect the VIN to the camera, and VOUT to the VTX unit..
It’s probably not worth trying.

I’ve taken apart the camera from the vTx.
Do you know the pinout of the camera (2 pin and 3 pin) ?

should I desolder the display? how could you tell what frequency you are on if I do.

if you can lol :)
set to the desire channel on your goggles, and then scroll through the VTX :) and I don’t normally change channel anyway

Trying to decide between this and the TX02, do you have that one as well? It would be really interesting to see the actual difference in terms current draw.

No I don’t have the TX02, but the actual current draw on the TX01 is slightly higher than what was specified, so I would assume it to be the case with TX02 as well..

If you end up with a TX02 I would be interested in a flight time comparison between TX01 and TX02. I am reeeally leaning toward the TX02 for my custom tiny whoop clone build that will be built around the Eachine FRF3_EVO Brushed FC that has the native FRSKY RX on board and would rather be able to go further/have better penetration/clearer video. I will be running a 600mah 1s lipo and 0817 “insane” motors so hopefully there will be enough left over current for a 200mw VTX after the insane motors eat most of it up. I will be using the Hubsan props which are pretty light to help with current draw.

So, I have replaced the TX02 on my whoop with TX01. I can notice the video signal is weaker – I now get slight breakups/noise when flying upstairs whereas before I had a solid signal at all times. It’s still fine, but you can notice the drop in vTX power.

Measured it at ~480ma… Killer on flight time and punch

I’d be interested in knowing it’s weight with its antennae replaced with a 12mm wire… Go on, you know you want to… :)

i will do it but not right now i want to give it a few more flights before risking it lol :)
but my guess is around 0.6-0.8g weight saving

Oscar, I’ve tested a few of the micro AIO setups as well.

I was surprised that I enjoyed the “Crazepony FPV Micro AIO Camera 5.8G 40CH 25mW Transmitter with Y Splitter for FPV Drone like Blade Inductrix etc” on amazon as much as I did, it doesn’t have a 7seg display but has some really tiny LEDs to let you know what channel and frequency you’re on, it only lights one at a time and has a button to flip the image. It seems to have great filtering as well

Hi Oscar,
Great review, very useful…
There’s so many new tiny FPV systems this year, specially coming from Eachine.
It would be great to compare all of them.
I’ve tried a few of them. but nothing scientific…
In my opinion, the best combo when it comes to the transmission is the one coming with the QX90, but it hasn’t the raceband and that’s bad… the image quality is quite good too.
The TX01 is good as well but I loose the image a bit quicker with the distance, I’ve got more interferences.
The worse for me is the EF-01, I loose the image, experience interferences very fast, as close as a few meters already… and as you mentioned, there’s no filter… very bad…
What’s your opinion, which one is the best? Another concurrent?

That right there is how you do a review! Thanks, Oscar – been waiting for a reviewer to answer all of the questions that are actually pertinent to a product like this…. Banggood should have sent this to you on the dole in exchange for a review.

Not surpringly though it would appear that FX798/7t is still reigns king though in many respects if you’re willing to spend top dollar.

I wonder if the components between the 25/200mw versions are the same and the it’s just a different power-regulation setting. Do you have a special method for testing current draw? Or are you just connecting a multimeter in series somehow?

maybe they do use same sensor and lens thus similar image :) I am not sure just a guess.
Yes I used a multimeter to measure current over a period of time and take average.