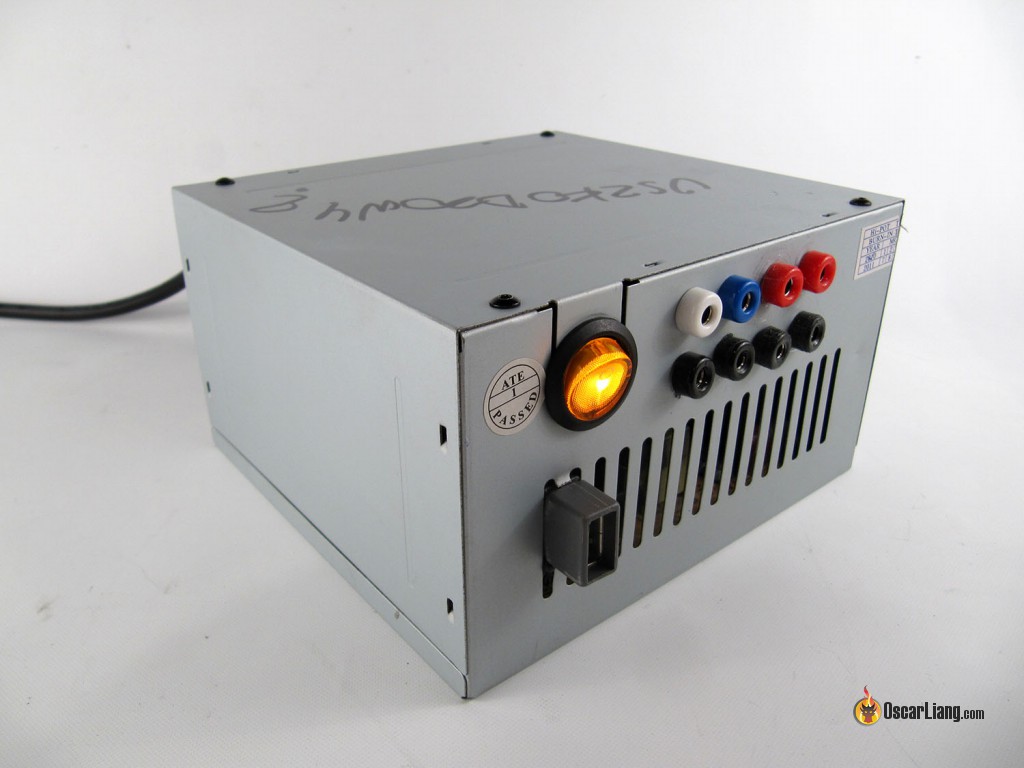 Some modern LiPo chargers are able to charge multiple battery packs at once. However they require large power supply to meet the current demand. Dedicated PSU’s are costly, so in this post we will show you how to make a cheap DIY PC/server PSU for chargers and workbench.

Article written by Konrad and edited by Oscar.

Also check out our previous hack on converting an 1000W Server PSU for LiPo chargers.

The PSU we are working with in this project operates on mains voltage, it is also equipped with large capacitors that can store possibly lethal amount of electrical charge. If you decide to build your own power supply, you are doing so at your own risk. This project requires high level of electrical knowledge, we DO NOT recommend beginners to do it.

If you need to access inside of the PSU, always make sure it’s unplugged from main power and wait at least half an hour for the capacitors to discharge. Avoid touching the inside of PSU with bare hands, always wear rubber gloves and protective gear.

You can get 2nd hand server power supplies surprisingly cheap for the kind of power they provide. Luckily I found this spare 400W PC PSU from work, that has “faulty” written on it (in Polish, later on I tested it and it’s working fine).

You can get them from old PC’s and servers. An used server PSU only cost around US$10 on ebay. The entire project could cost as little as $15 or less, including the PSU and other parts such as connectors and swtiches. 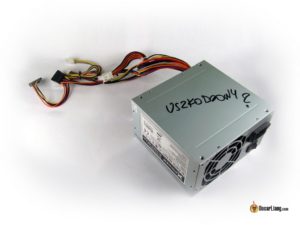 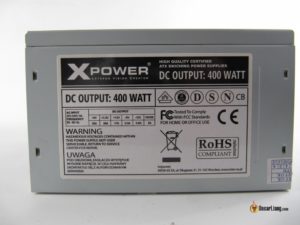 There is some requirement though: we need a PSU that allows 12V output with large enough current. Mine has an output rated for 12V, 17A so that’s good.

In general older PSU’s tend to be able to output higher current on 5V rails, while modern units deliver more on 12V. All units should be properly labelled, check the sticker for information regarding current capabilities of your device.

PC PSUs are ideal candidates for DIY benchtop power supplies, and for amateur electronics projects. They can deliver decent amount of current at 3.3V, 5V, 12V. They can even also provide small current at negative voltages such as -5V (only on old PSUs, not present anymore on new models) and -12V.

Some PSU’s also have a 12V sense wire as well, you will need to solder it with Yellow 12V. Sometimes the sense wire color is the same as the corresponding output line, and it just uses thinner gauge wires.

Keep in mind the above table is the standard ATX color coding, some manufacturers may use different coding, like DELL for example. Voltage values or functions should be written on the main PSU board, if not, confirm voltages with a multimeter. You can also check the pin-out on your main lead. 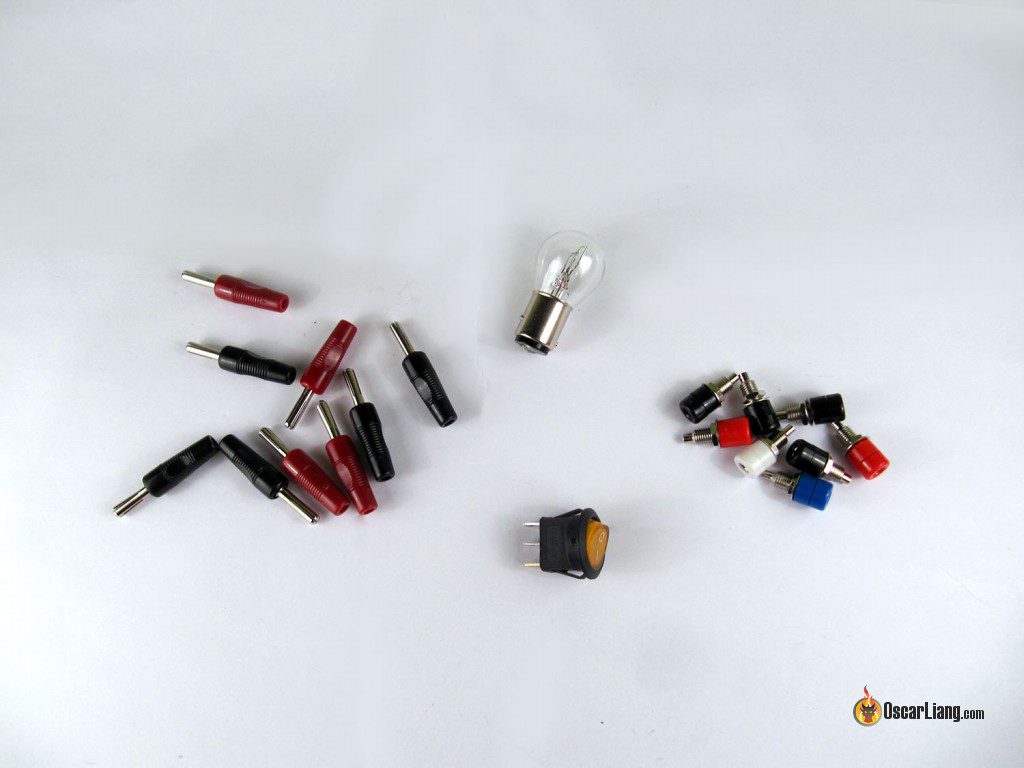 The PSU I have has “faulty?” written on it, so I first had to test it if that’s true.

Check If Spare PSU Is Working

I grounded the green “power on” wire and the internal fan started spinning. Additionally I soldered a 55W automotive light bulb to the 12V rail just to check if it was delivering power. 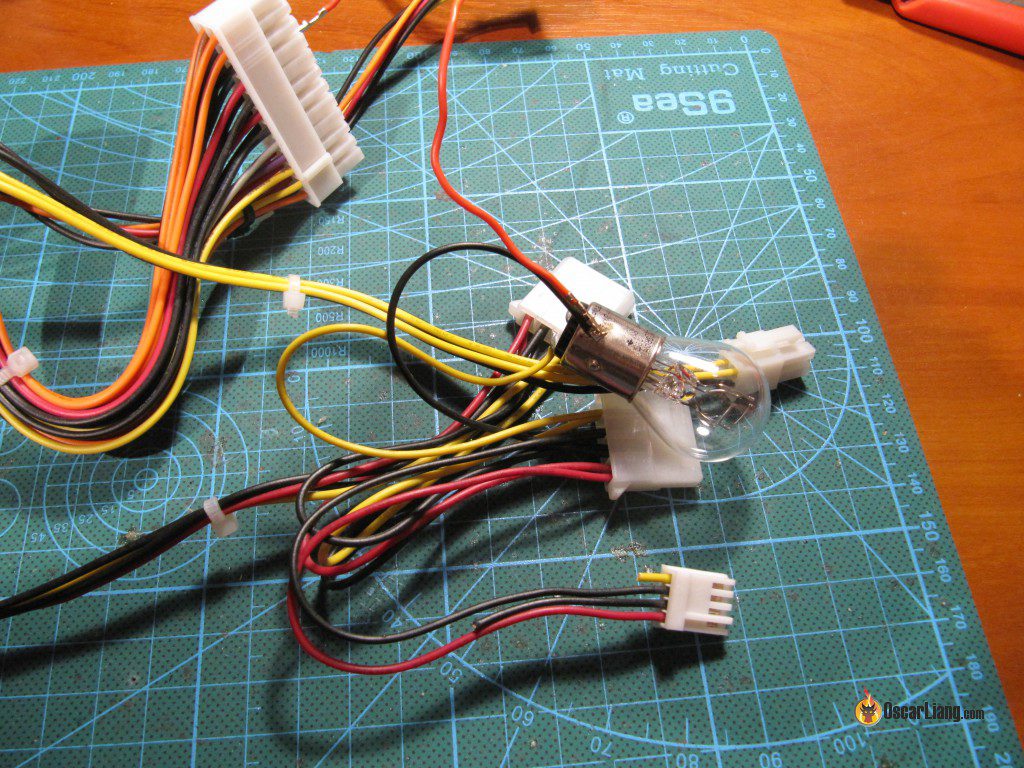 NOTE: most PSUs require some initial load to function properly, you can do this by soldering a cement 10ohm 10W dummy load resistor to the 5V line. Remember that this resistor will get HOT! Even if you are able to measure voltages on all the outputs, some PSUs might not be able to deliver the amount of current they are supposed to unless some load is present on 5v line. Make sure you find out how your unit works.

After I’ve made sure my unit functions properly, I disconnected the power but left the bulb connected with the PSU to discharge possible current stored inside. I also left it like this overnight just in case.

After opening the case I started planning the connections and wiring. It seemed that I have a lot of free space inside this unit, so I decided to place the terminals on the front. Originally, all the wires passed through a big hole from inside to outside of the case, but instead I am going to install a switch in this hole. I also decided to cut a hole in one of the vents to easily mount a USB socket.

I then separated all the wires by color. You also need to separate some ground wires for power on switch and additional hardware you intend to mount, like USB sockets and “power good” LED for instance. I got a switch that has a built-in 12V LED as power up indicator, and I used a yellow wire for this. 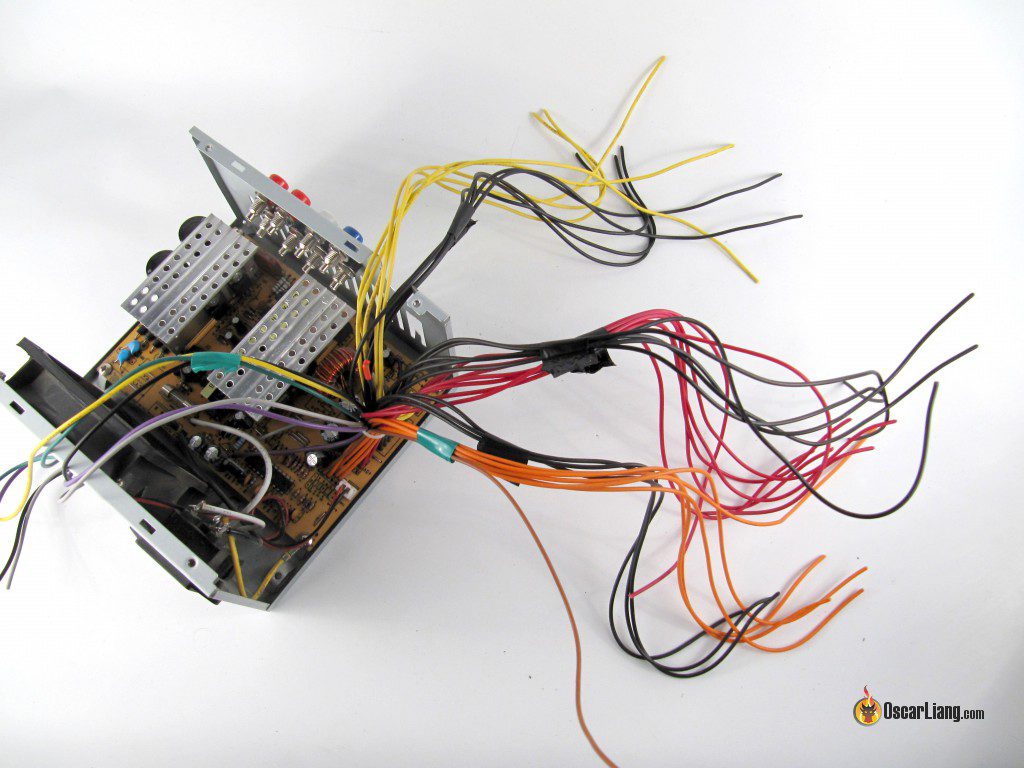 The banana sockets I am using require drilling eight 8mm holes for installation.

Drilling these holes are pretty simple: 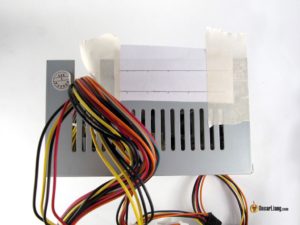 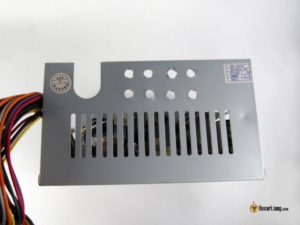 As you can see, my drilling isn’t perfect, but will get the job done just fine.

Place the banana sockets in the holes and measure how long you need to run the wires. I stripped about 2cm of wire to be able to twist them easily, filled the clump with solder and then cut about 1cm from the end. I used 14AWG wire I had laying around to connect between ground posts and soldered ground wires to leftmost one. Do the same with other wires. 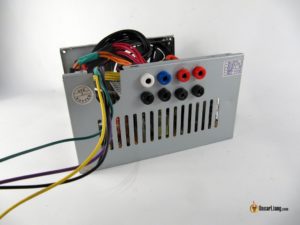 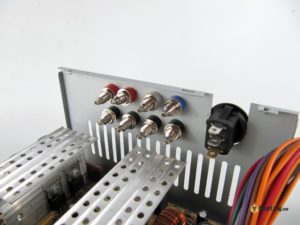 Remember to twist the brown wire together with orange ones as it measures losses in the circuit.

I used the same way to solder both 12V posts – 14AWG wire between posts and soldered PSUs yellow wires to the closest one. 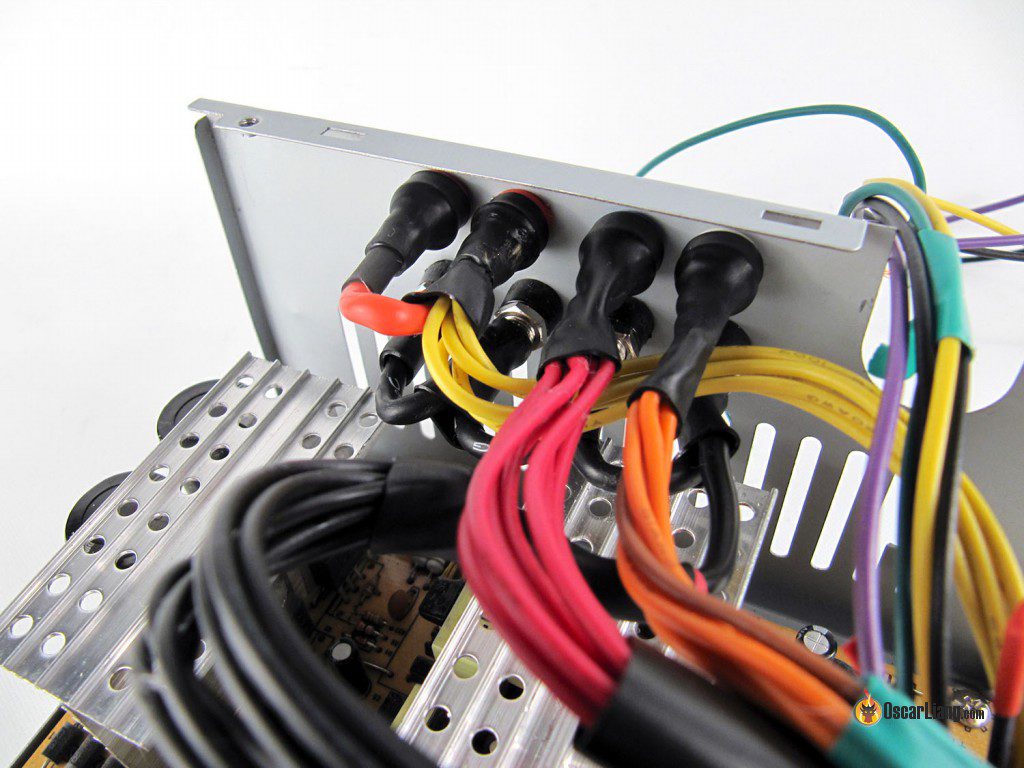 Soldering banana sockets with those wires requires large amount of heat, my 60W soldering Iron was barely enough to heat it up properly. So if you think your 25W iron would do the trick, good luck with that. Been there, done that :) 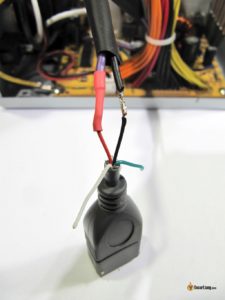 The USB socket is optional. It will be used for charging any USB devices like your smart phones.

Using purple 5V standby wire enables you to have some limited current (2A in my case) available even when entire PSU is in standby mode.

I salvaged the female connector socket from some USB extension cord. Strip the wires, you only need red (+) and black (GND). Solder them with corresponding PSU wires, heatshrink and mount socket in the chassis. Use some hot glue to hold it in place. 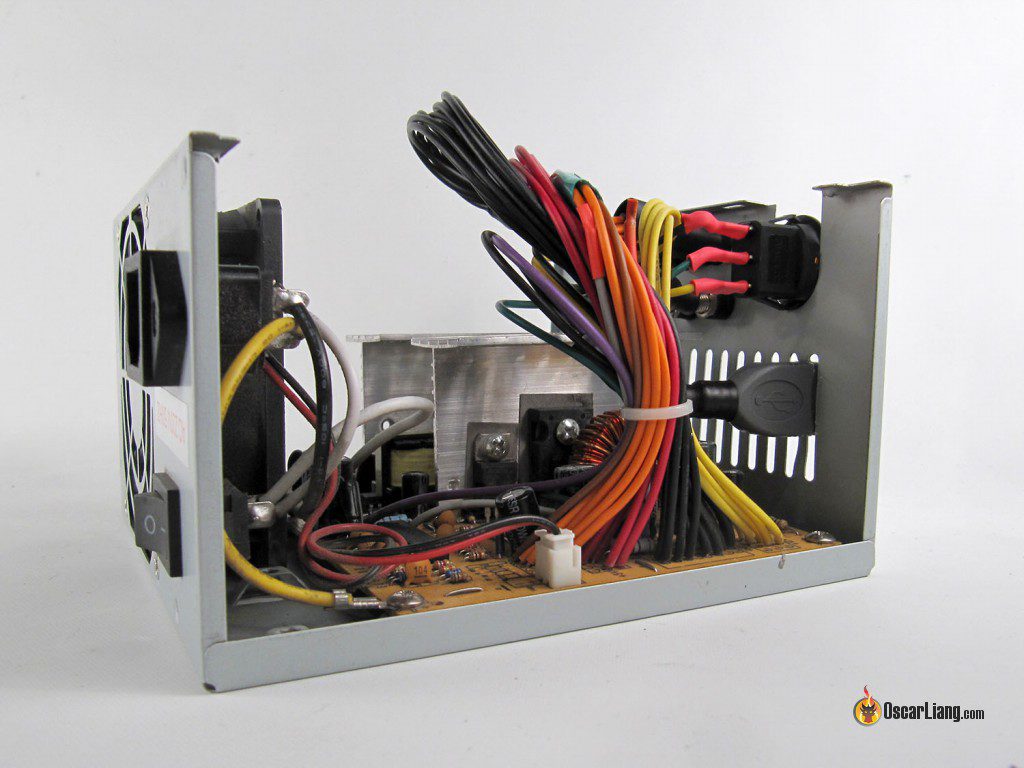 Finished interior of the PSU 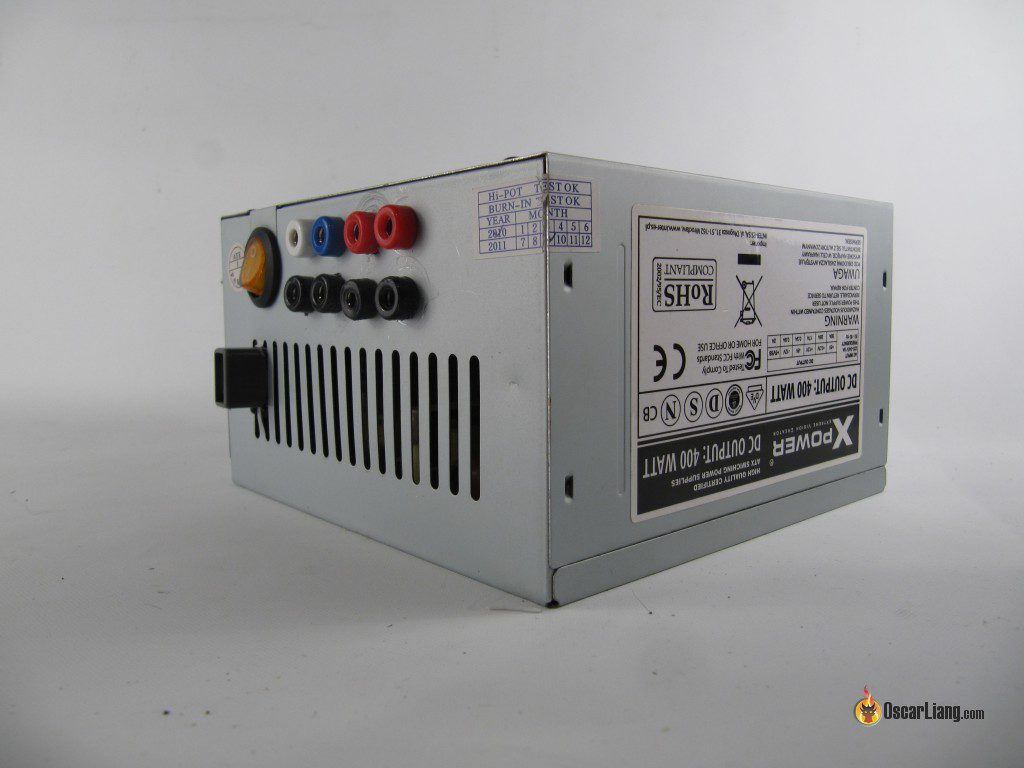 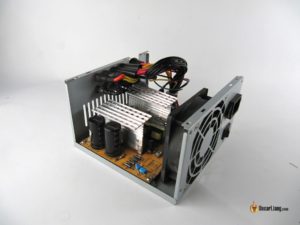 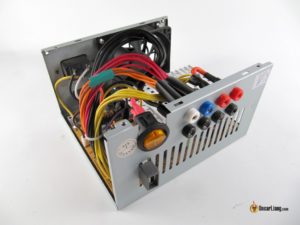 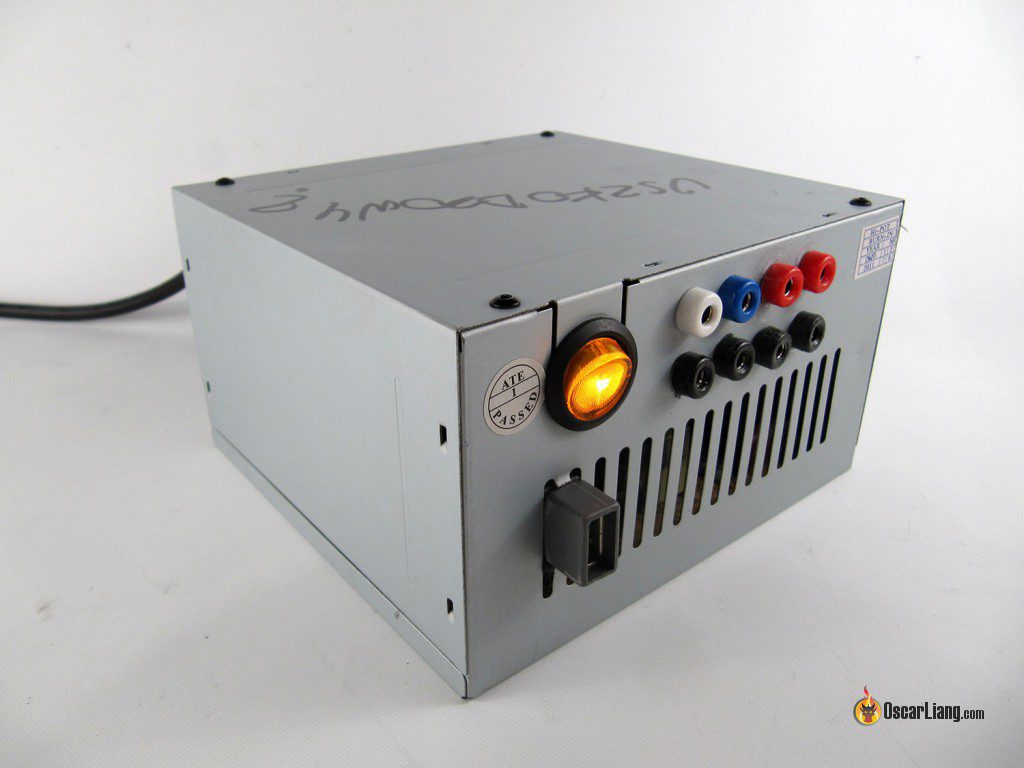 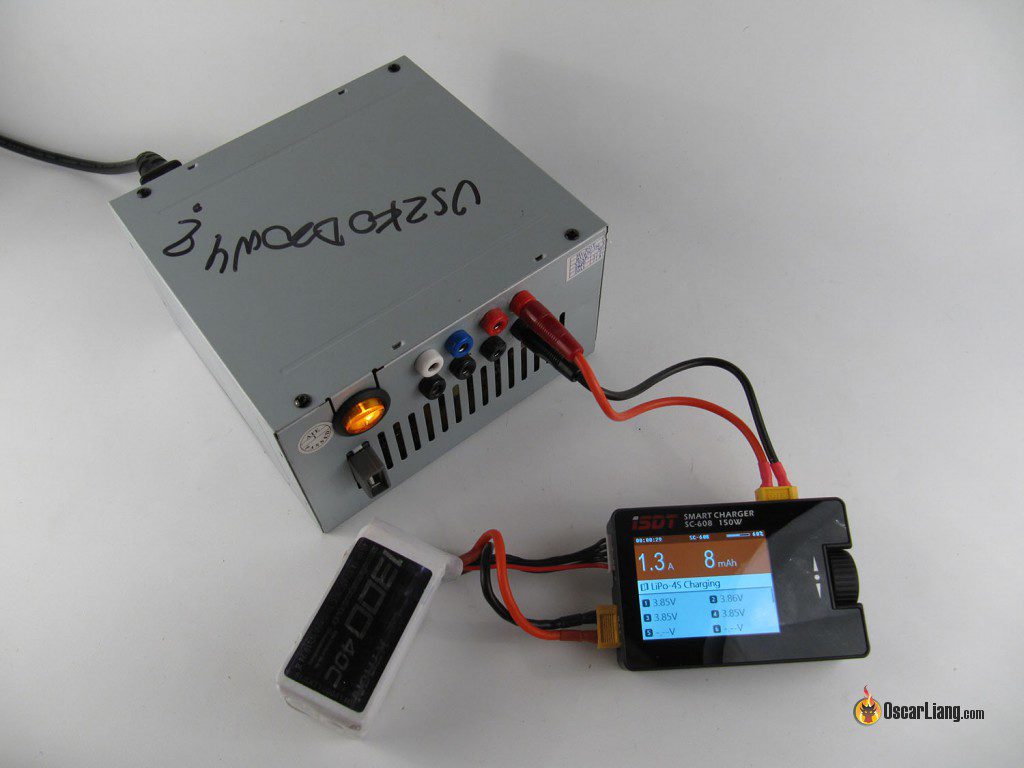 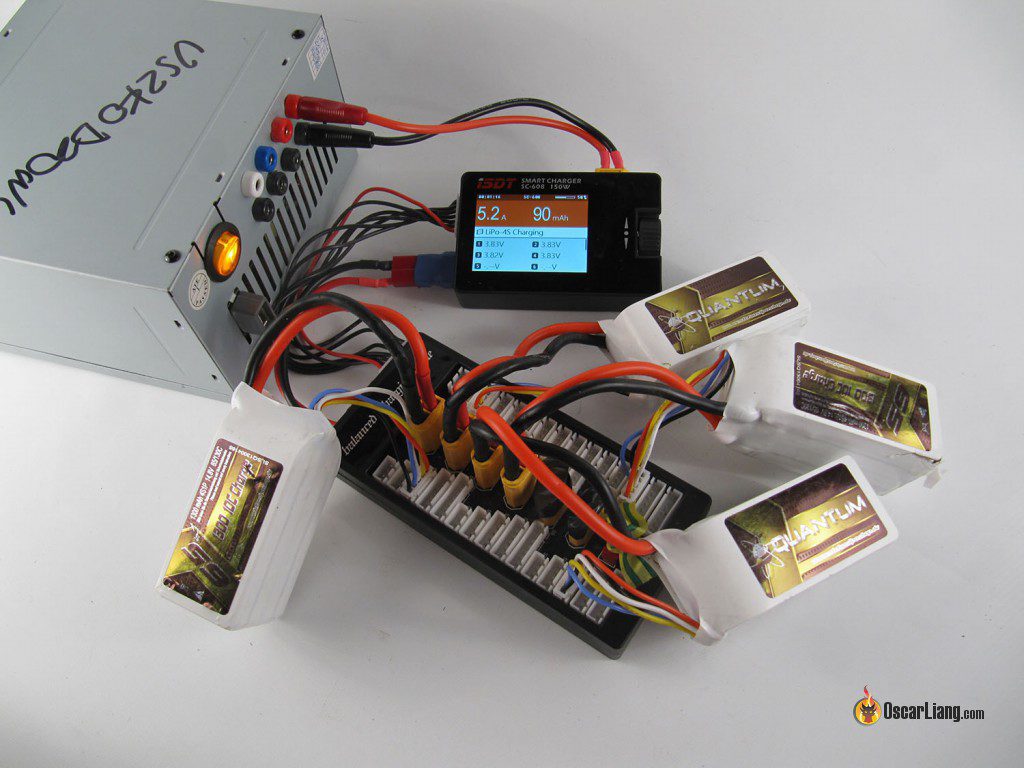 PSU’s are noisy, especially old ones with dirty fans :) You can simply change out the fan to a newer, quieter one.

Nevertheless, these PSU is designed to pump hot air out of your PC/Server, they don’t need to spin that fast when they are not inside another case. Those fans are typically plugged into 12V line, you could try to lower their power and rotation speed by powering them with 5V.

It’s probably safer to leave the fans as they are. But if you decided to modify it, make sure you test and check for temperature during load. For units that runs warm, you can also add some legs on the bottom to bring in extra air flow.

Just add some labels to output sockets and now you have a cheap and powerful source for your LiPo charger that also supplies you with different voltage levels for your other projects.

Hello!
I want to use a Computer Power Suppliy (PSU) for connecting my 12V -> 110V Inverter. Both are rated 300W. After soldering a 12V lamp to the 5V output it only delivers about 30W on the 12V. If I connect the inverter, the voltage drops and the PSU shuts down.

Is the PSU too weak or did I made a mistake?
Virginia

Hello!
Where did You bought this psu? It has written “Uszkodzony?” and it means “Broken?” in polish :D
Regards!

Just a note about the ATX Power Good pin (Grey wire):
It doesn’t simply goes to 5V when the PSU is plugged in and the power switch is on. The PSU starts up when switching the power on, but it needs some time to stabilize all output voltages. The Power Good is a signal for the motherboard that the PSU is ready to take the load.
It is also a good diagnostic possibility when you have power related problems. It happens that all voltages read perfect values with no or moderate loads yet the PSU fails when the load increases. In this case it’s worth to monitor the Power Good pin: it should read 5V all the time. If it drops, or changes voltage – even just a few times – it’s quite likely that something is wrong with your PSU.

Good article! I followed the guide, and my PSU was working for a while, but then it randomly turned itself off. It started again when I reset it, and it stayed working for the rest of the day. Then today, it switched itself off after 10 minutes of charging, and will not come back on when I reset it. I did forget to join the sense wire, do you think something might have blown? Any ideas for how to fix it? Thanks

Thanks,
first try to find all sense wires (on most units it’s just the brown 3.3V wire) and connect them to corresponding rails, I don’t think anything has blown because of that. Also try to put some load on 5v rail – even an automotive 12V bulb should be enough and check with that plugged in.

My unit is stable without that dummy load, but 12V line is sagging to 11.3V, and it raises to 11.8V as soon as I plug the bulb in to 5V. I will solder the resistor in later.